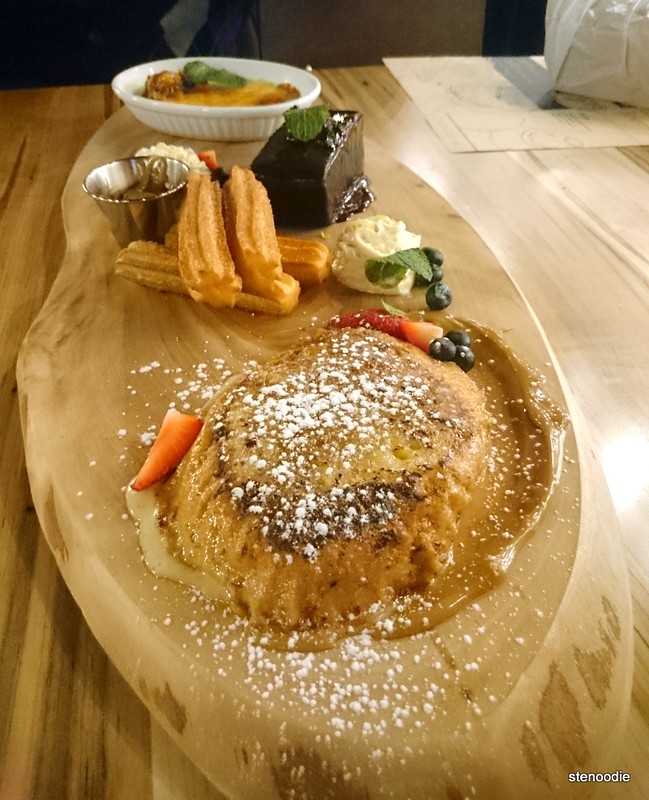 Tapagria Spanish Tapas Restaurant opened a little more than a month ago in Markham near Commerce Valley Drive near Highway 7.  It is an upscale Spanish tapas restaurant that has a downtown flair.  It is really nicely decorated inside with a long bar, open concept kitchen, and lots of space for big and small groups to dine at.

Anh, Eric, and I came here on a Friday evening to try out this restaurant since we are all major foodies (and food bloggers; well, two of us that is :P).  We splurged a little bit that night and ordered a lot of tapas to share including a well-known Spanish paella rice dish.

A fair amount of people here on a Friday evening 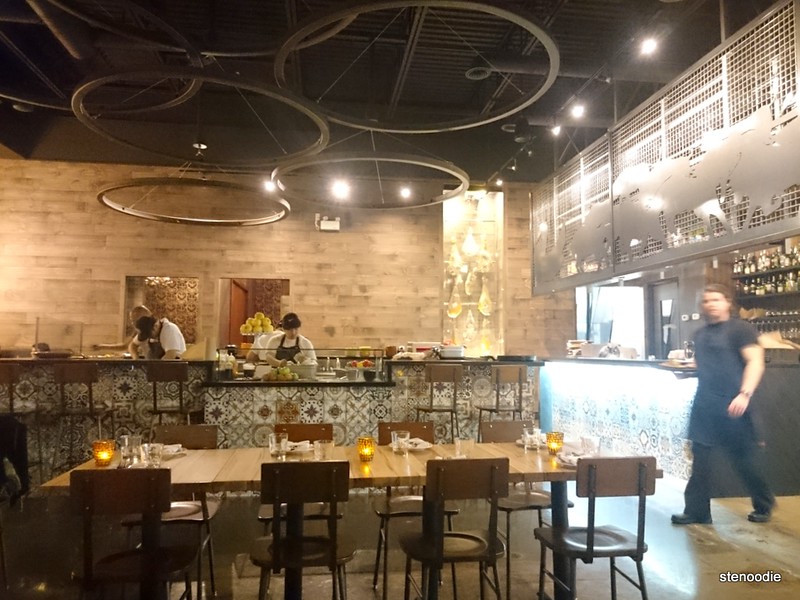 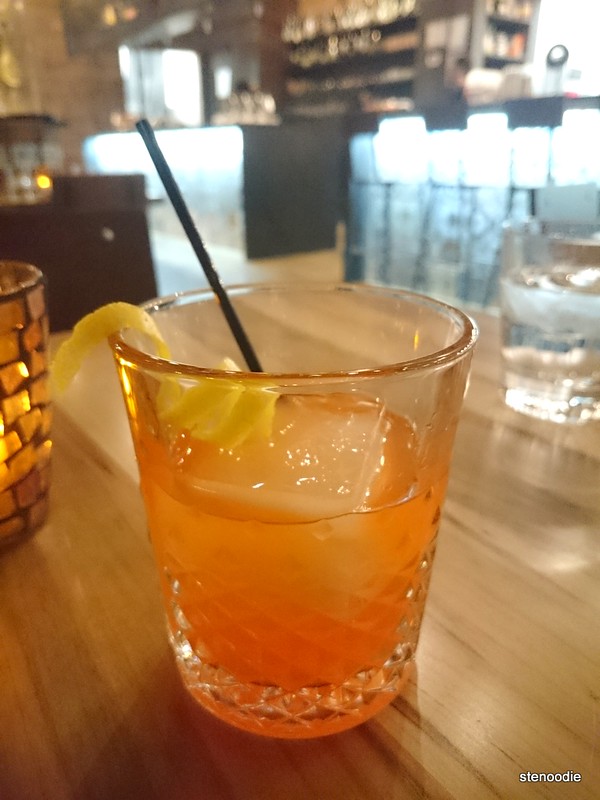 The service here was spectacular as our server made sure that we were well taken care of all night long and popped by often to check that everything was going well for us.

Anh started off with an Apparent Sour.  I took a sip of the drink and liked how fruity yet tangy it was.  However, for $12, I think it was a little costly especially since it wasn’t even filled to the top.  It was cute that the glass contained a gigantic ice cube though! 🙂

The first tapa to arrive was the Foie Gras Pâté (see menu here).  It came in two and was garnished with truffle oil and mango.  I absolutely love foie gras and this pâté was very, very smooth and creamy.  It was so creamy to the point that I wasn’t even sure if I was eating foie gras at one point, haha.  The slight sweetness of the mango was an interesting take on it. 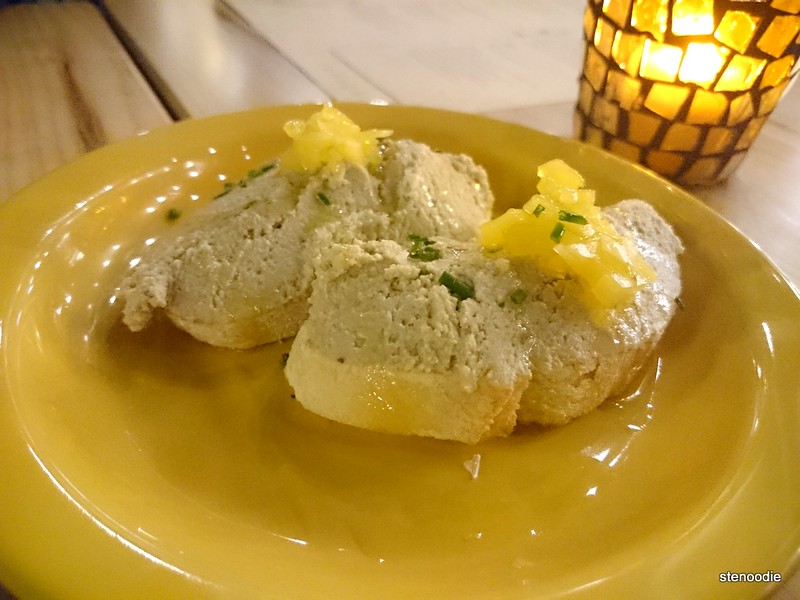 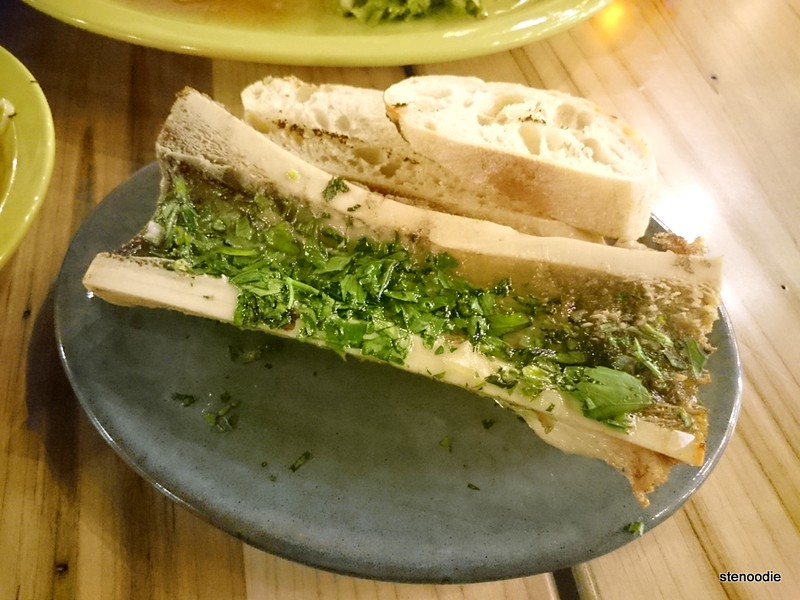 Next, we had the Roasted Bone Marrow.  I love bone marrow and was extremely interested to see how Tapagria would prepare their bone marrows.  To my utter disappointment, there was barely any bone marrow inside the bone.  For $12, this was really not worth it in my opinion.  The server also informed us that we could add $4 to get two bone marrows, which would have been a great deal, except I thought that even one of these wasn’t even worth it.  Eric and Anh both witnessed me trying to scrape more bone marrow from the bone using my fork, but nothing really came out….  That’s quite disappointing. 😦  (I remember having an amazing bone marrow at The Black Hoof that was greasy and full of marrow!)

The Fried Anchovies were a nice snack.  The anchovies were fried nicely and covered with sauce.  However, they were a bit salty even for my taste (and I’m usually a big fan of salty snacks). 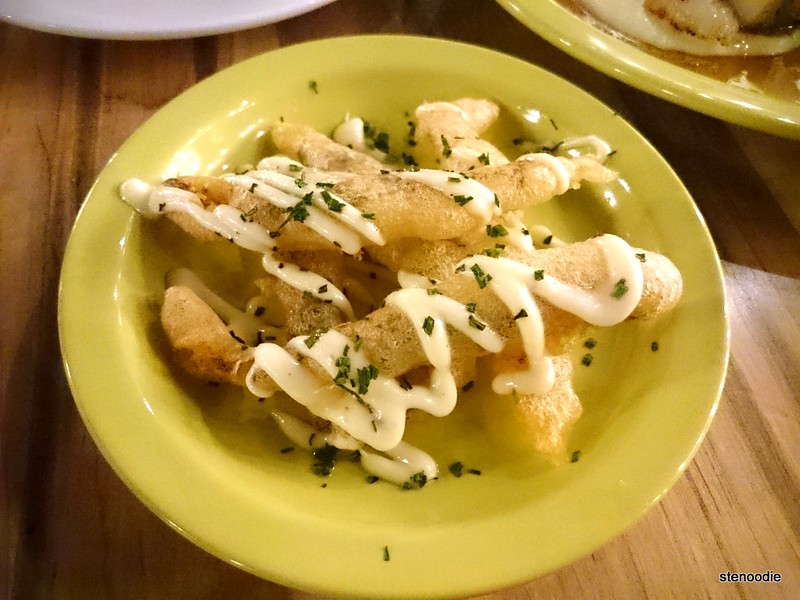 The Salt Cod Croquetas were tiny morsels with a little stick stuck through it.  These were not as heavy as I expected to be and tasted decent. 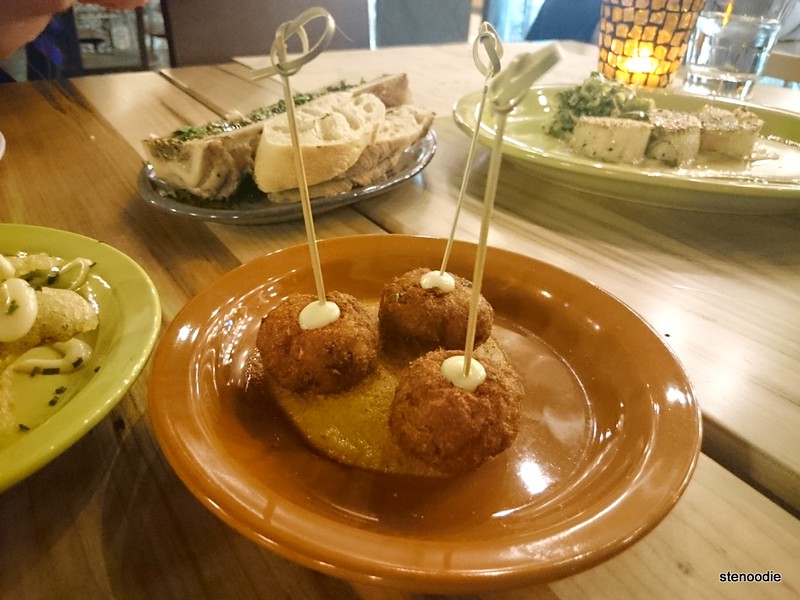 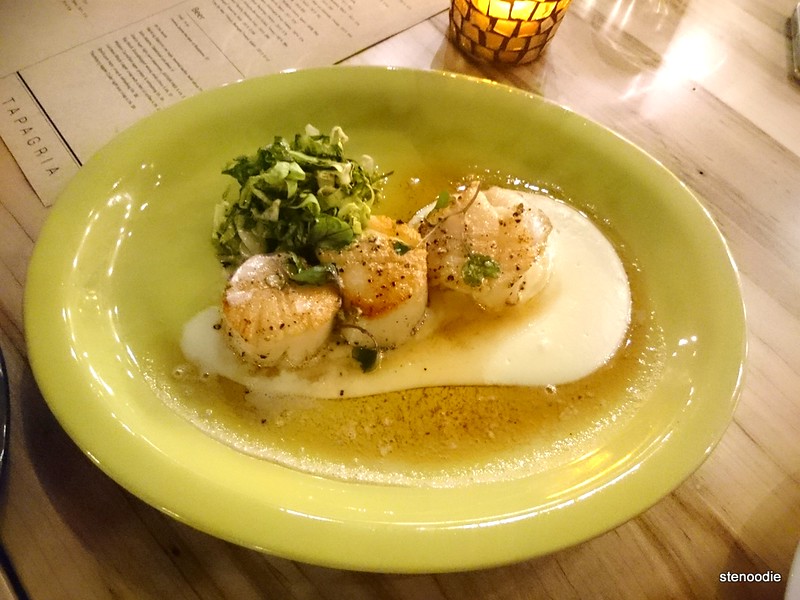 At this point, we all thought that we were going to be very full and too full to even finish the upcoming paella dish, but since everything was quite small, we decided to order some more tapas to share.  But first, the Paella de Tapagria arrived (the menu said that this would take 45 minutes to be freshly made and cooked for the rice to blend with the flavours so we had ordered it first right off the bat). 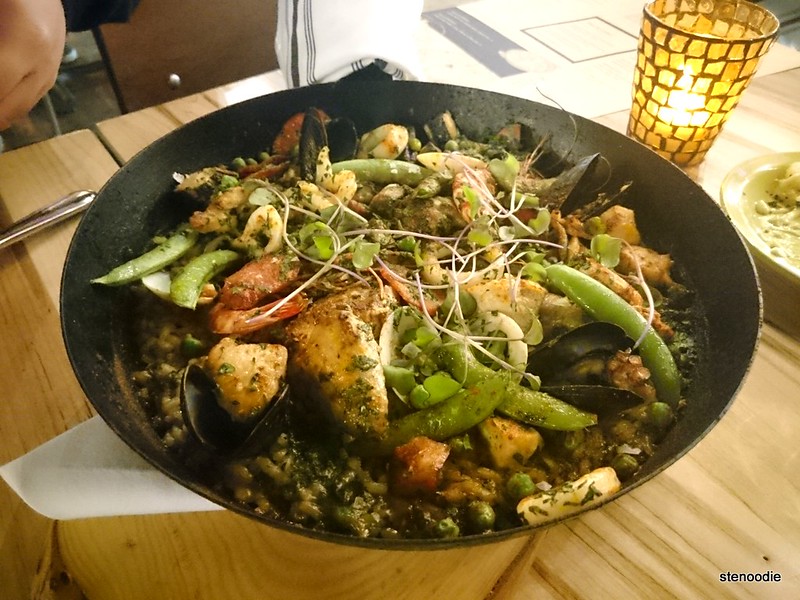 They had two kinds of paella here.  The Paella de Tapagria contained bomba rice, shrimp, chorizo, hen, mussels, jamón, octopus, and peas.  The other one, the Paella de Mariscos differed by having clams, lobster, calamari, and saffron.

It was a huge pan of all the ingredients cooked together.  Paella is a traditional Spanish rish dish and I was lucky enough to have it twice when I visited Spain last autumn.  I was really excited to try this!

I liked it!  There were a lot of ingredients in there and we weren’t able to finish it so we packed up the remainder for me to take home (unfortunately, I actually forgot to take the little box and left it right on the table right before I left.  D’oh!).  Eric commented that the peas seemed a little out of place and I agreed.  At least I thought the green peas would have been stripped from their outer shell and only the individual green peas would have been tossed in there.  I liked that the hen was tender and not overcooked.  The chorizo, jamón, and octopus were fairly good too. 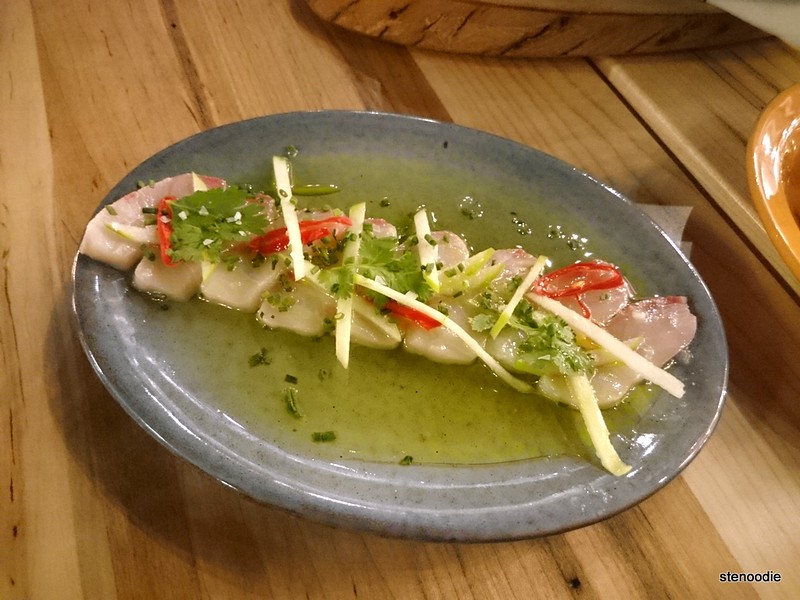 The Smoked Eggplant was a favourite of the server’s and recommended it to us when we asked her which tapas she liked on the menu.  The smoked eggplant was placed on top of a bread and topped with a sweet tomato.  I wasn’t a big fan of it since the smokey flavour was a bit strong for my taste.  (It reminded me of the smokey ice cream that I had at R&D.) 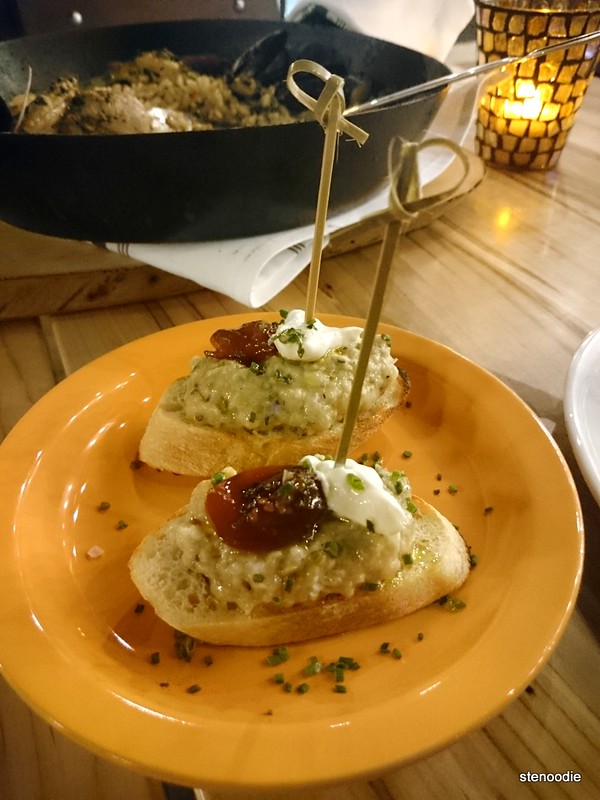 Finally, by this point, we were feeling more full, but we knew we couldn’t leave without trying out the dessert sampler that Anh and I had come for.  On instagram, we had seen a fellow food blogger show a picture of a secret menu item of a dessert platter.  We asked the server for it and were shortly presented with this amazing dessert platter! 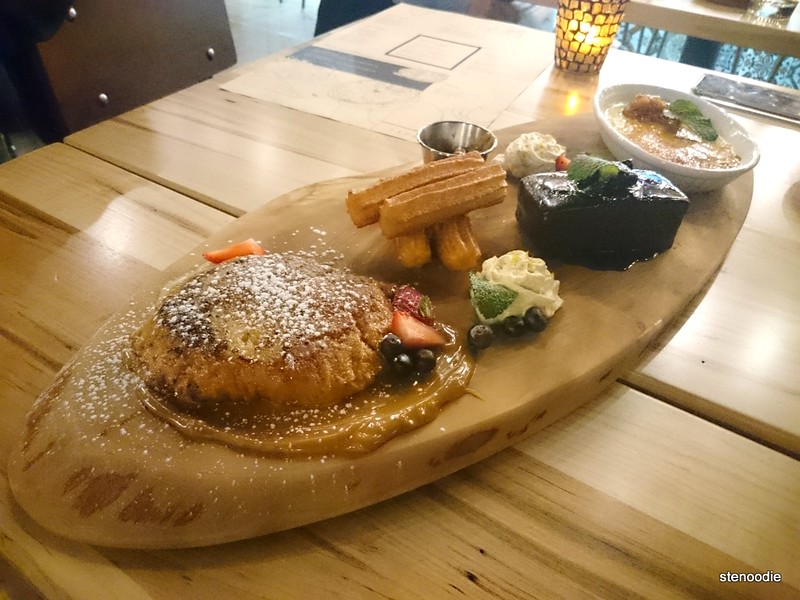 It contained all four of the restaurant’s desserts on a platter so that we could try everything at once.  (You have to ask for this since it’s not on the menu at all!)  It contained Spanish Toast, Churros with House Sauce, Pastel de Chocolate, and Crema Catalana.  Of these four choices, the Spanish Toast was new to me.  (I recently tried Crema Catalana for the first time at Nuit Social!) 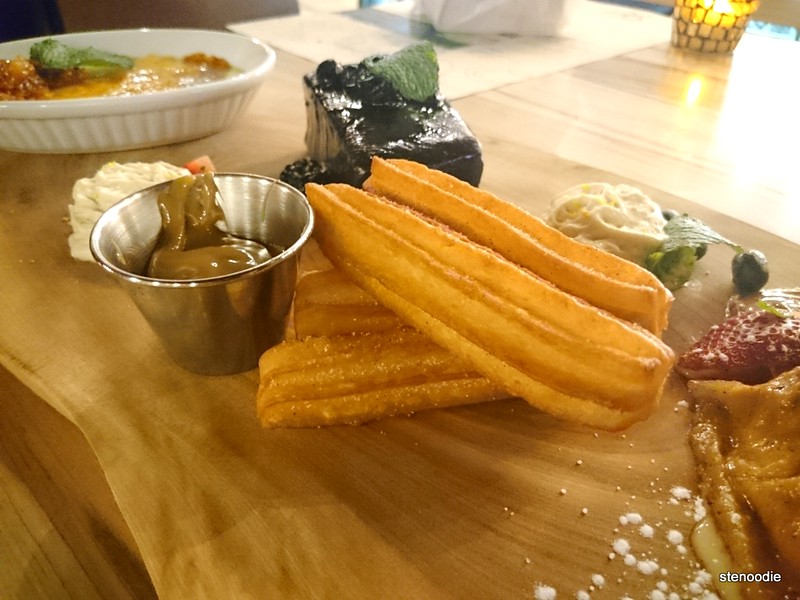 It was such an impressive and beautiful platter.  Even one of the servers who walked by “oooh-ed” at it.  The Churros with House Sauce were pretty good.  I liked the churros and the house sauce even more.  It was like a caramel; very creamy and smooth!

The Crema Catalana wasn’t too spectacular to me… probably because I’m not such a big creme brulee-like type desserts. 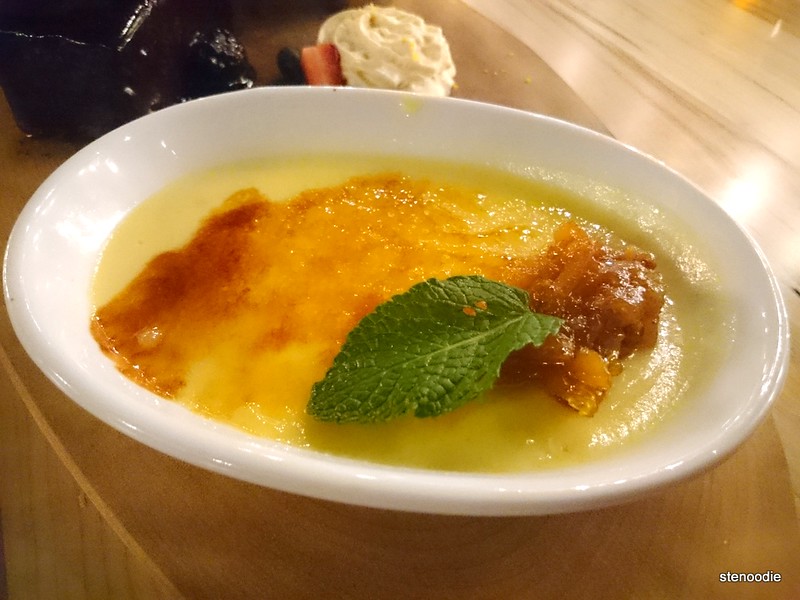 The Pastel de Chocolate was essentially a piece of chocolate cake.  Usually, I’m a huge fan of chocolate cakes and would eat this up ASAP, but unfortunately this one was quite dry.  It was dry to the point that it tasted a little crumbly inside and none of us liked it. 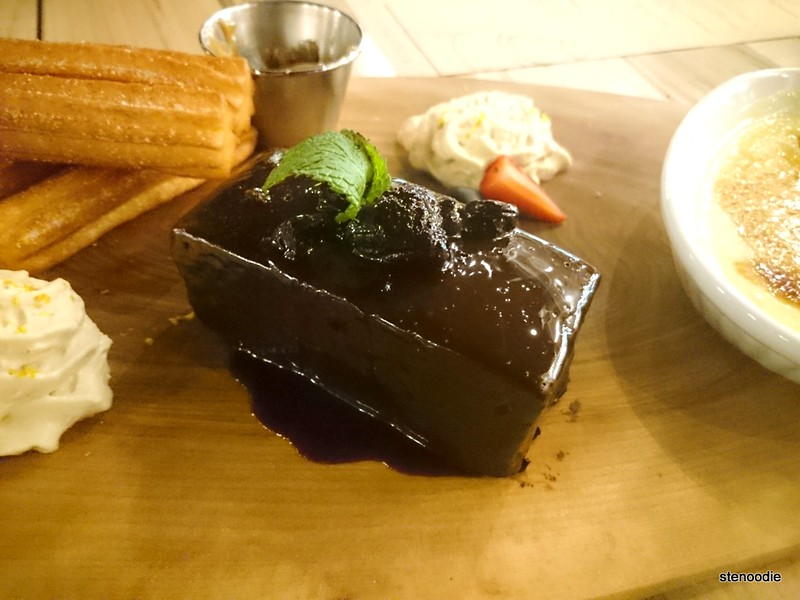 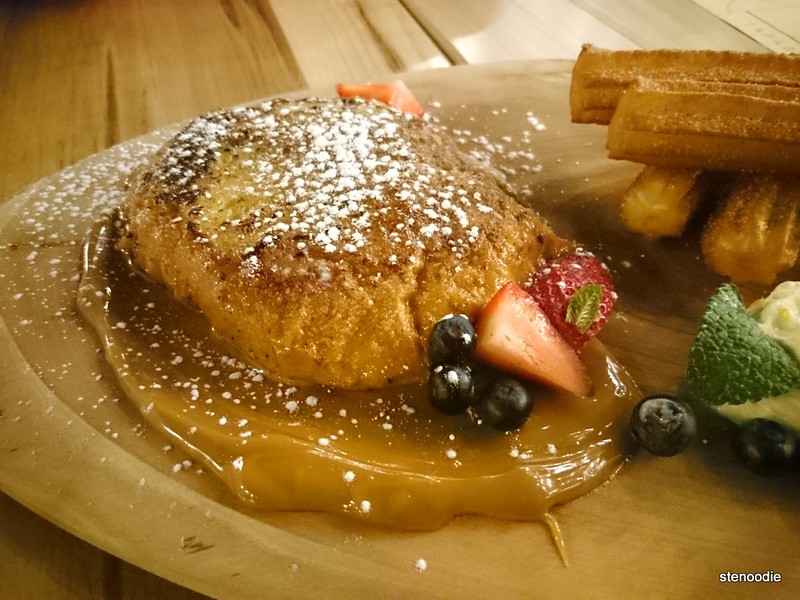 On the other hand, I absolutely fell in love with the Spanish Toast.  This was my first time having it and I couldn’t believe how delicious it was!  On the outside, it was a thin skin that was a little crispy and rough yet on the inside, it contained a smooth pudding-like cream that was oh-so-delectable!  It was also encircled with a bit of the house sauce of caramel.  It was absolutely delicious!!

When the server came around to ask us how everything was, I couldn’t help but tell her that everything was great except that the Pastel de Chocolate was too dry… she informed us that they were actually working on a new recipe of it and asked if we wanted to try it or at least take a piece to go home with.  We were all really full and politely declined her offer; it was really nice of her. 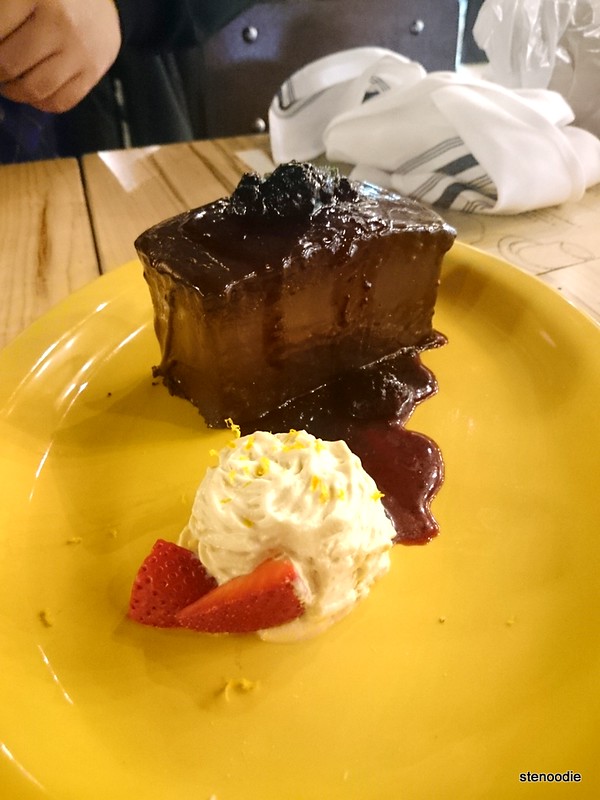 We sat around a bit more to chat, and it just so happened that the manager shortly arrived with a plate of a brand new slice of the Pastel de Chocolate in hand for us!  He told us that we had to try it out and that this was their newly improved recipe.  We couldn’t say no at that point and I was extremely pleased with their service and attention to customer service and experience (perhaps they also could tell that Anh and I were food bloggers since we took a long time to photograph the dishes before consuming them and didn’t want us to leave with a bad taste of the restaurant). 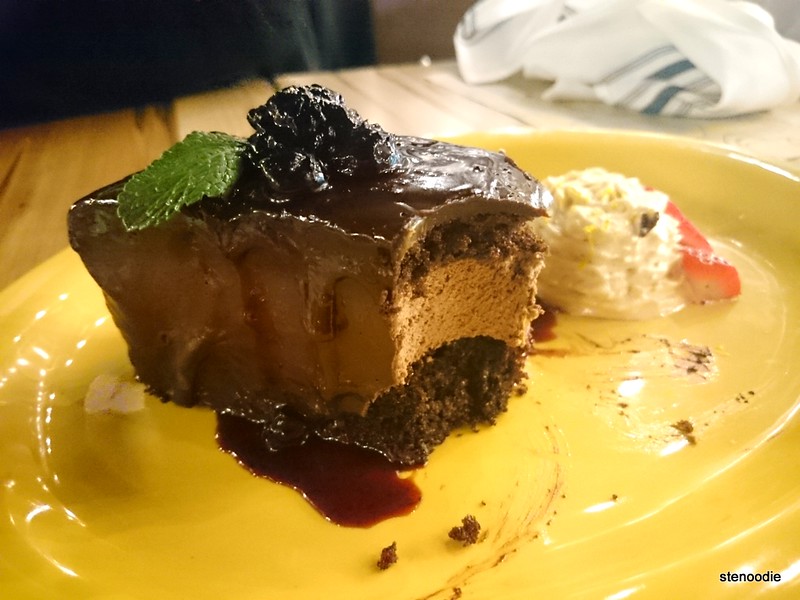 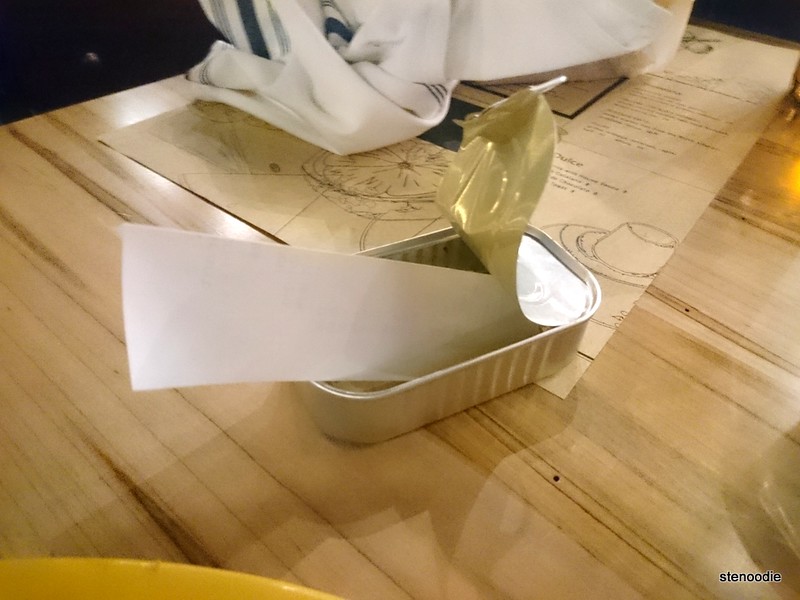 Receipt in a little tin can

Nevertheless, I was pleased to try out their new recipe of the Pastel de Chocolate.  This one was definitely much more moist than the other one.  Within the two cake parts, there was a mousse part that was very smooth and soft which tied the entire cake together.  When the manager came around and asked us for our opinion of the cake this time around, I was pleased to inform him that I loved this version!  I was very thankful for his generosity! 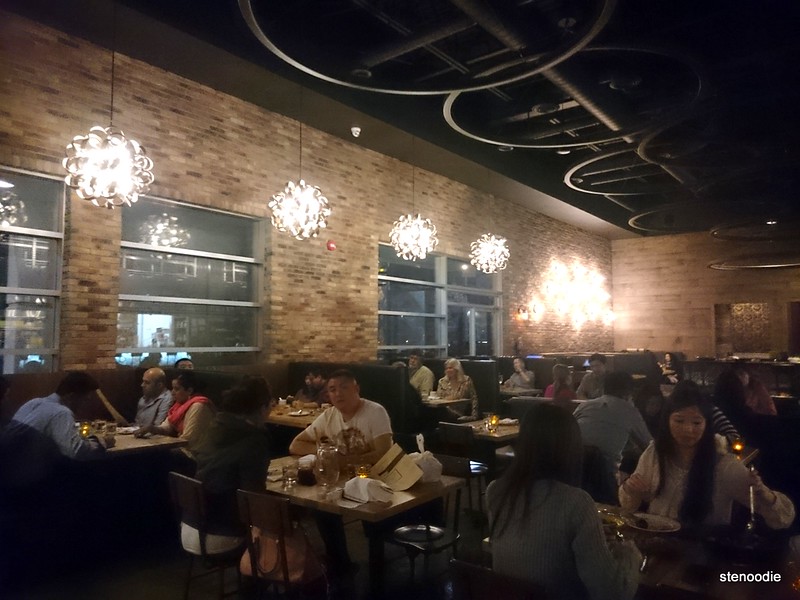 The end of the night 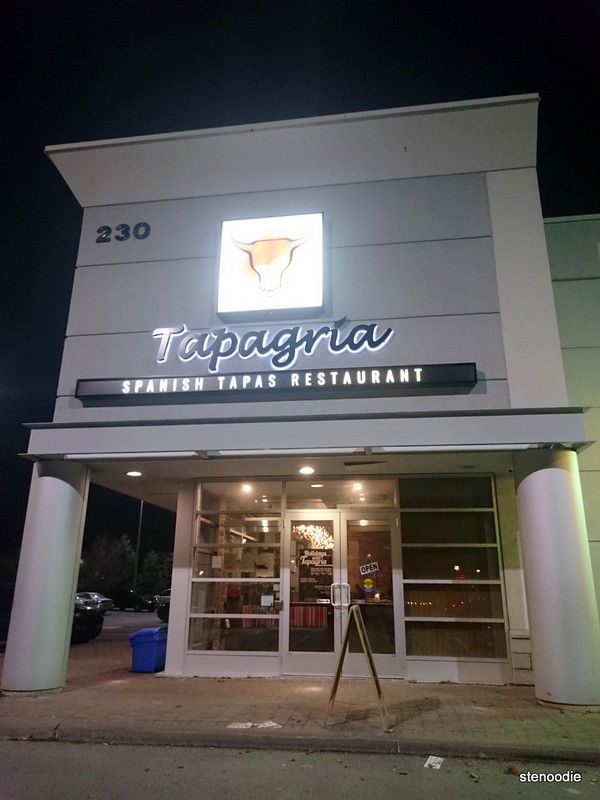 Alas, our big foodie night ended and we were very full!  It’s too bad that I forgot to take the leftovers of the Paella home to enjoy, but otherwise, I’m very glad that I got to try out Tapagria Spanish Tapas Restaurant.  I think that the dishes were decent and the service was impeccable.  However, it is a little pricey when you compare it to other Markham/uptown restaurants as the cost seems to be more reminscient to its downtown counterparts.  Nevertheless, if you want to enjoy some downtown-style tapas in Markham, you can try out Tapagria!  Bring at least two or three friends with you to try out the tapas to share! 🙂