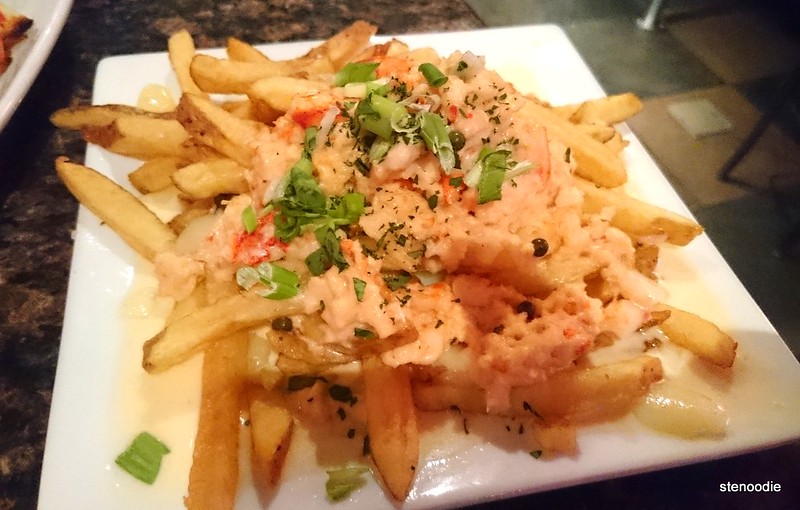 Recently, I bought this amazing restaurant voucher booklet/app from entertainment.com where it features hundreds of deals and redeemable coupons for restaurants all over Toronto.  I was so excited to use it!  I bought it for $24 (usual price is $40) on the website and also got 15% cashback for it.  To use it, all you have to do is open the app before you order with the server or to clip the coupon and show them. 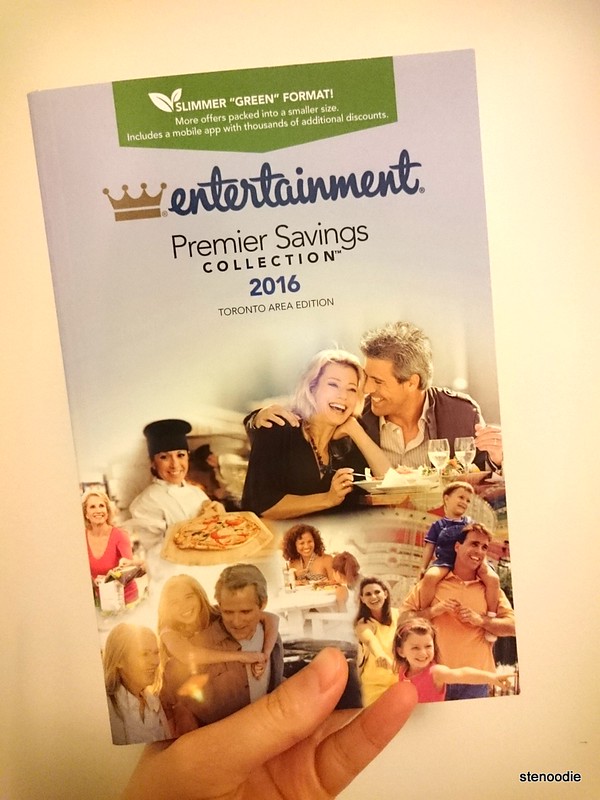 Marlowe Restaurant & Wine Bar was one of the many restaurants featured in this booklet.  The voucher allowed me to get a free lunch or dinner entree for free after ordering the first one.  Wow!  I feel like companies rarely do such generous offers nowadays, so I was super excited to try it out at Marlowe.

Tracy and I weren’t particularly hungry on this weekday during the holidays, so instead of two full lunch entrees, we ordered two appetizers to share.  Finger food makes it easy to chat and catch up with one another.  We ordered the Lobster Poutine (sounded so good!) and the Appetizer Platter (I love platters since there’s an assortment of food). 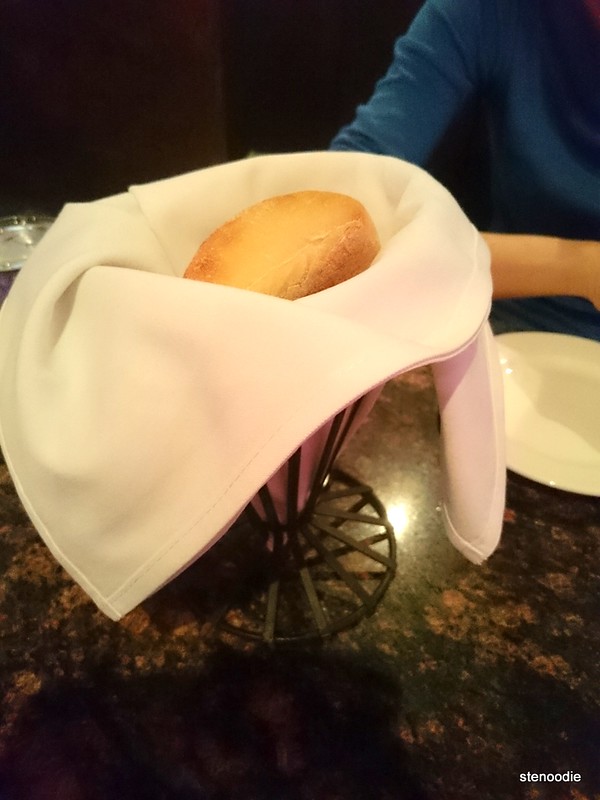 I showed the app to our server who was able to confirm it with the manager to give us the promotion.  Score! 🙂  What a deal!

After some bread with olive oil and balsamic vinegar (that was already on the table), our appetizers arrived.  Yum!

To be honest though, the presentation of these dishes could have been a little fancier to match with the nice atmosphere of the restaurant in my opinion.  The Lobster Poutine looked a little drab with the sauce and cheese all melted underneath the fries… which was a little strange.  The lobster meat was were scattered and torn up.  It seemed to me that the lobster meat was taken from frozen lobster.  If the poutine had big chunks of lobster, crispier fries, and hot melted cheese on top of the entire pile, I think it would have been an amazing poutine!  (The Madagascar green peppercorn & tarragon cream sauce was a nice touch, but I think for this poutine, a heavier and more flavourful sauce would have been delicious.)  Nevertheless, I enjoyed the lobster morsels. 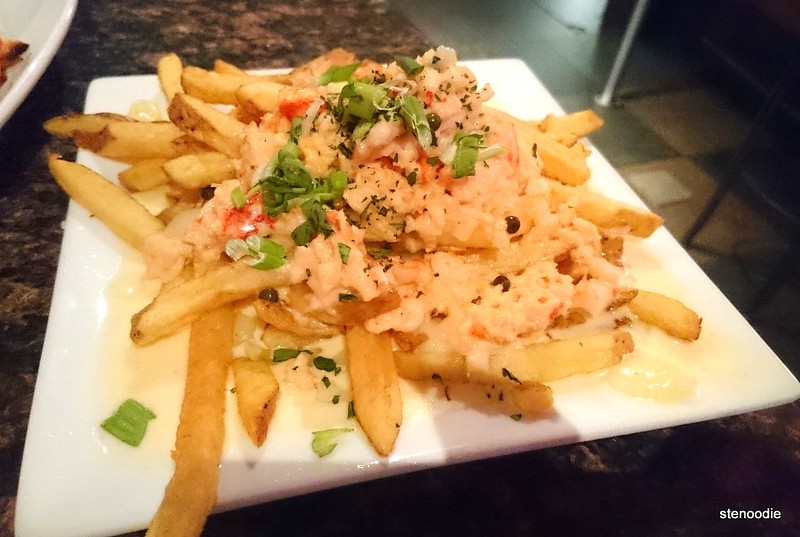 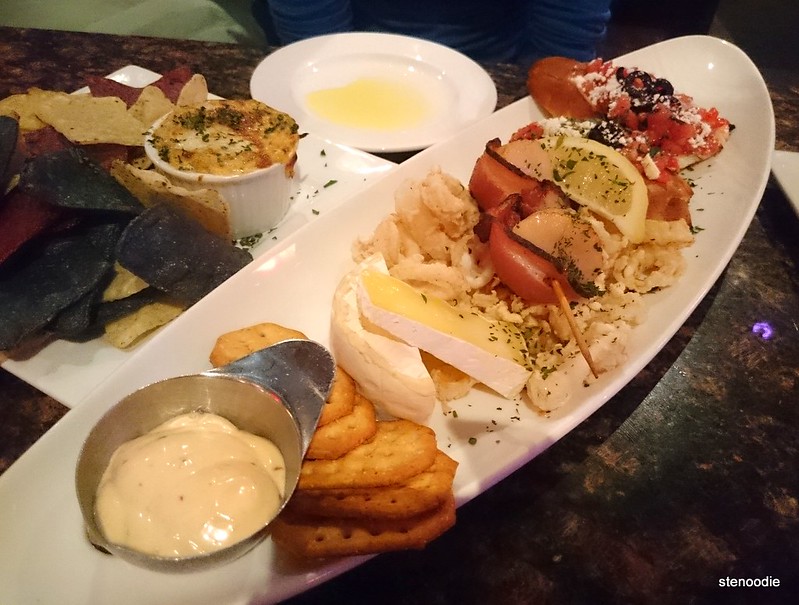 The Appetizer Platter came in two parts.  A long plate contained two of the bruschetta (perfect for us to share), fried calamari with a thick chipotle pepper aioli and lemon sauce, and brie cheese with crackers.  The other square plate contained multi-coloured nacho chips with a spinach and goat cheese dip.

The fried calamari was too overdone for my taste and very hard.  On the other hand, the brie cheese was incredibly soft and I really liked it!  The Bacon-Wrapped Scallops were infused with lemon grass and wrapped in pancetta bacon (Italian bacon made of pork belly meat that is salt cured and spiced with black pepper).  I liked how soft and tender the scallop was.  The pancetta — perhaps I’m not used to this type of bacon — was a little rough to chew, but still tasty.

The “Marlowe bruschetta” contained soft black kalamata olives and plum tomato chunks on an olive oil brushed white baguette which was very tasty compared to most bruschettas being served on just plain bread. 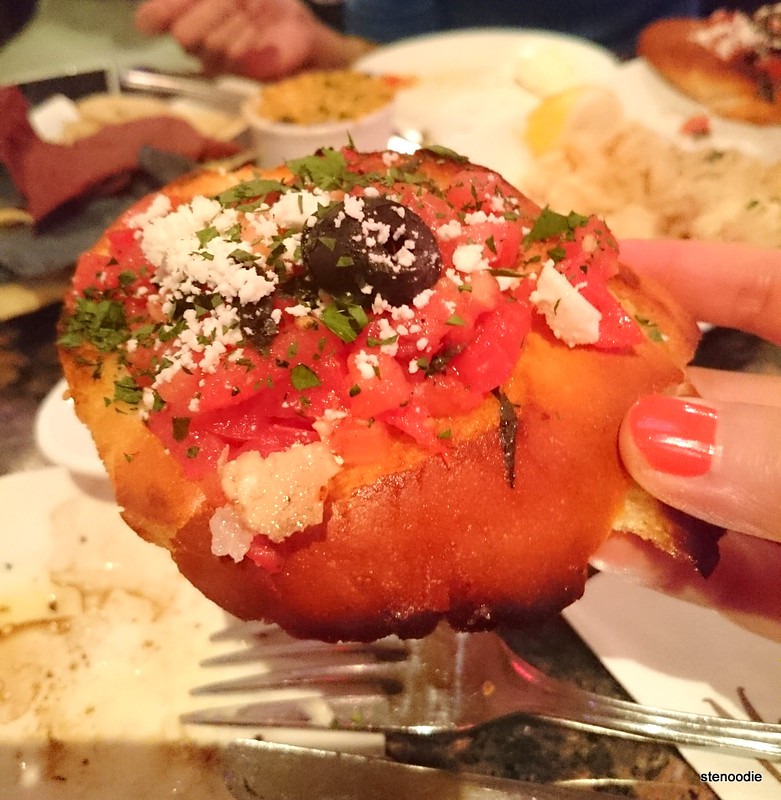 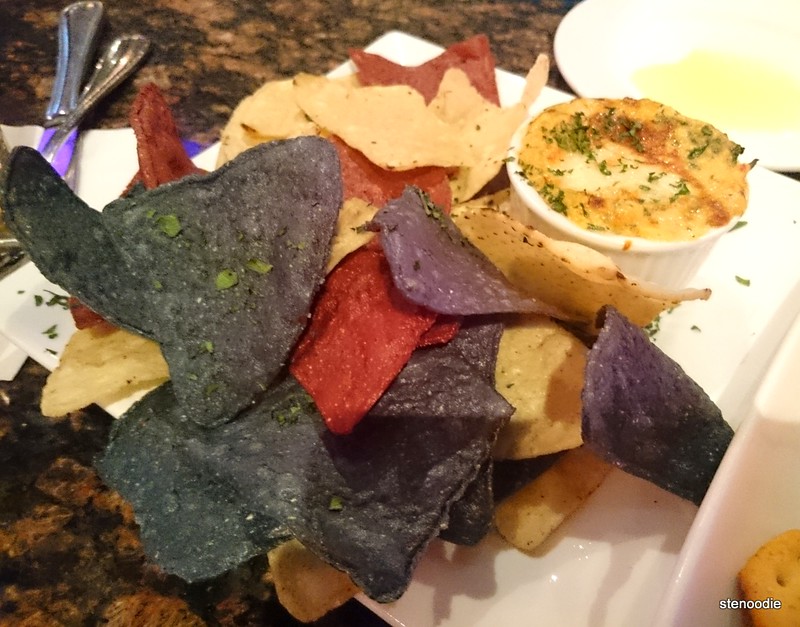 The spinach and goat cheese dip was pretty good but I think it was a little too thick.   It contained a lot of ingredients in it like cream cheese, parmesan cheese, goat cheese, mozzarella cheese, artichokes, jalapeños, and roasted red peppers.  The nacho chips were just average crispy chips.

This was more than enough food for the two of us so I ended up taking the leftovers home to enjoy (leftovers can actually be a full meal for me!).  I really appreciated the server’s attentiveness to our table that afternoon.  I think Marlowe Restaurant & Wine Bar is a great place to hang out with friends or co-workers as they know how to cater to big and small groups with a very flexible Italian menu that caters to all tastes.  However, based on what I ordered on this day, not everything tasted superb or extra appetizing for me to highly recommend this restaurant. 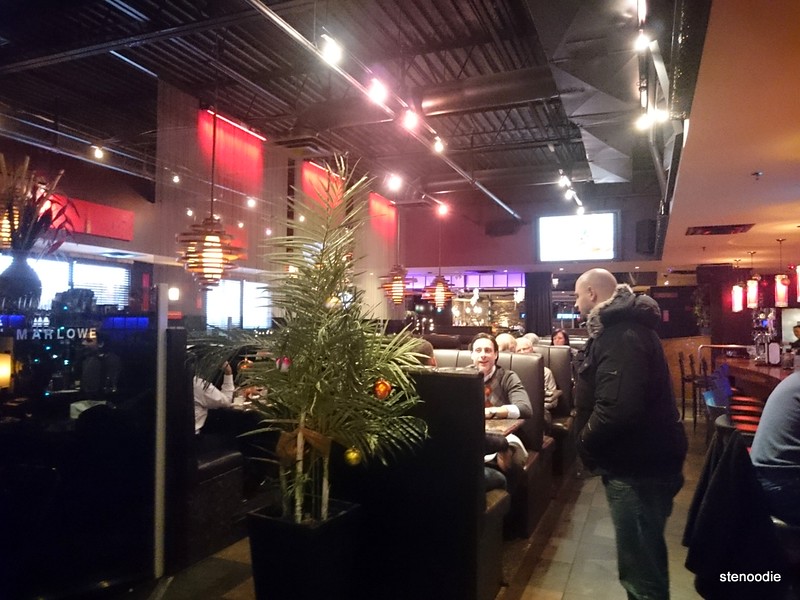 Plenty of secluded booths and tables for dine-in

However!  I definitely recommend getting the restaurant booklet from entertainment.com so that you can save a lot of money on restaurants that you might want to visit and try.  On this visit, we only paid the price for the Appetizer Platter; the Lobster Poutine was completely free of charge since that’s what the deal provided.  It was amazing!  I pretty much “made” back what the paid for the booklet already and this was only my first restaurant that I’ve visited from using the coupon in the book!  Amazing!  I can’t wait to try more restaurants and take advantage of the deals. 🙂

Located in the popular East Beaver Creek spot for dining 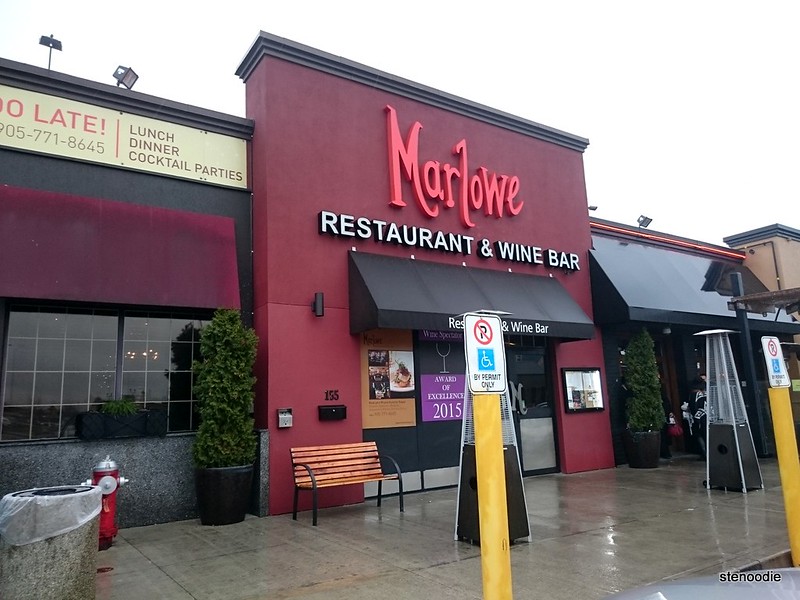 Have you been here before?

Have you been to Marlowe Restaurant & Wine Bar?  It’s located at the slew of restaurants on York Boulevard near Highway 7 and East Beaver Creek in Richmond Hill.

June 2016 update!  A friend and I came for dinner here recently.  I used the paper version of the Entertainment.com coupon and was again able to enjoy one dinner entrée for free upon ordering of the first one.  Yay!

The service was really friendly and nice this time and I felt very well accommodated by the female server.

I ordered the Shrimp Linguine while Clarissa got the Lobster Grill Cheese Sandwich.  We were served bread with creamy butter before the entrées arrived.  The butter was so good with the bread! 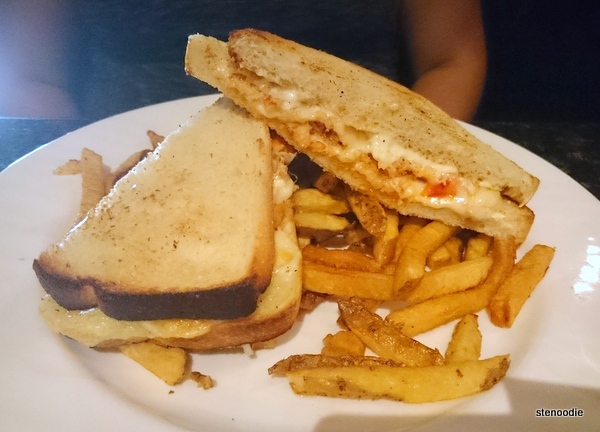 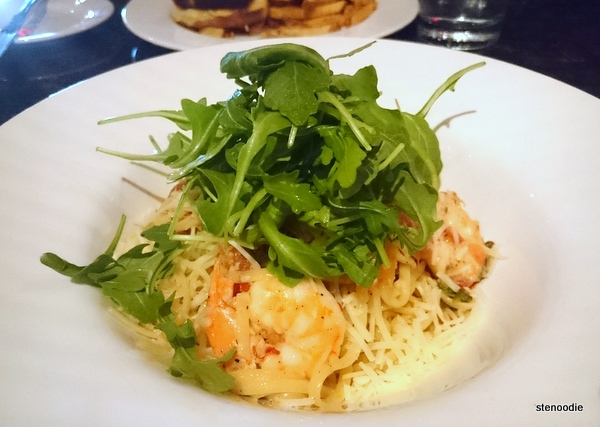 The Shrimp Linguine came with pan seared garlic shrimp with lemon chili oil and topped with rocket greens and Parmesan cheese with linguine pasta that was perfectly al dente.  It was a solid pasta dish!  I think that the garlic shrimp was a little overcooked, but I also prefer shrimp that is more tender than firm in texture.

Glad to be able to come again to have dinner! 🙂