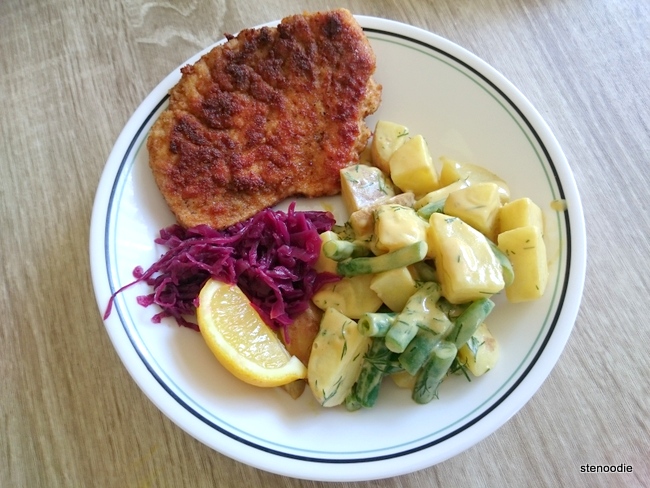 The cooking begins yet again with Chef’s Plate!  For this fourth shipment of the pre-measured ingredients and chef-inspired meals delivery, I ordered the Turkey Schnitzel with a German Potato Salad and Pickled Red Cabbage.

I most recently ate a pork schnitzel sandwich while in Germany so it was quite neat to be able to try this recipe and make a schnitzel out for myself at home.

The recipes came fresh and pre-portioned and measured in the delivery box (ice gel packs to keep the turkey cutlets cold).  Chef’s Plate makes it so convenient to cook for yourself at home and so fun as well! 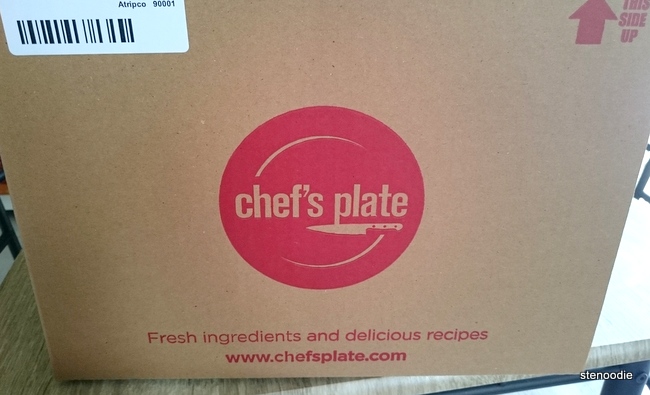 I love seeing this box arrive at my doorstep! 😀 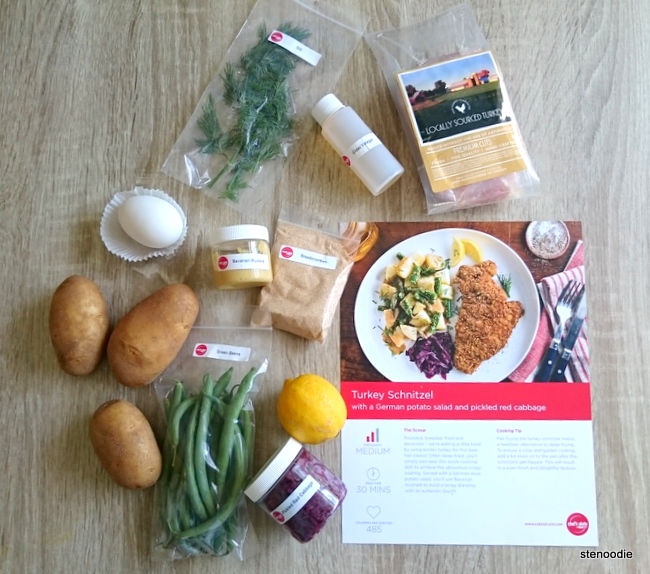 All the ingredients needed to make Turkey Schnitz and a German Potato Salad!

This recipe called for 30 minutes of prep time and had a difficulty level of Medium. 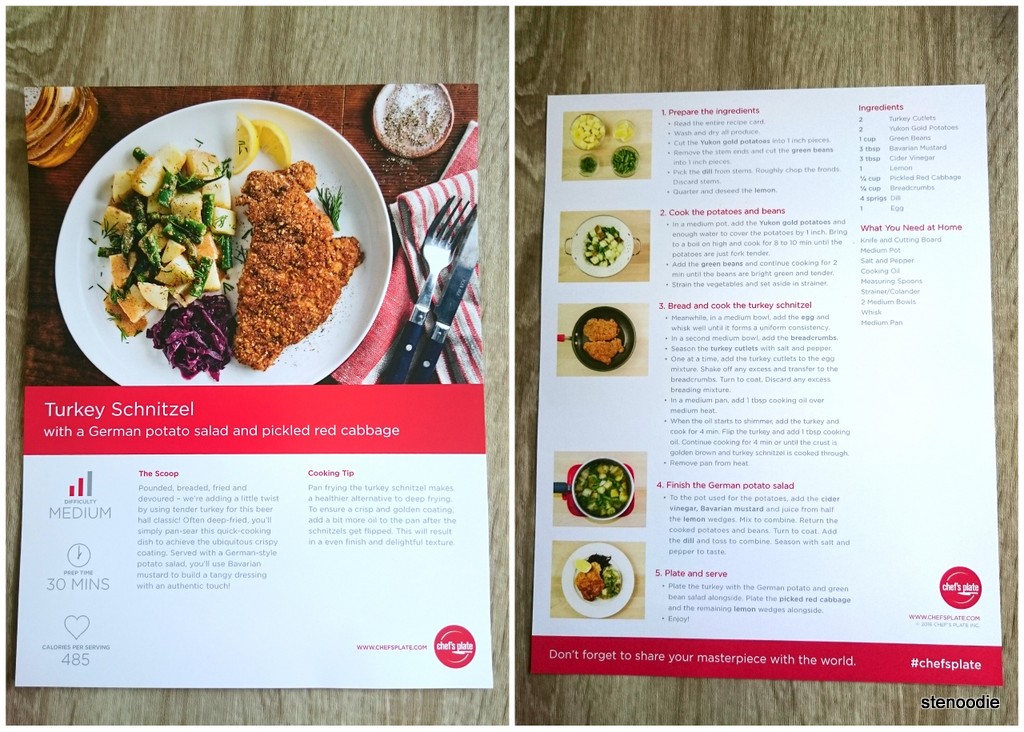 After marinating the turkey cutlets with salt and pepper and washing and drying all the produce, the cooking began with the potatoes and beans. 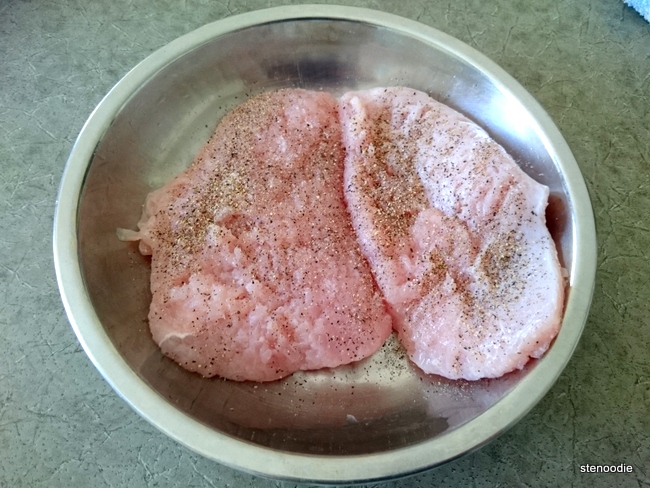 Marinating the turkey cutlets with salt and pepper 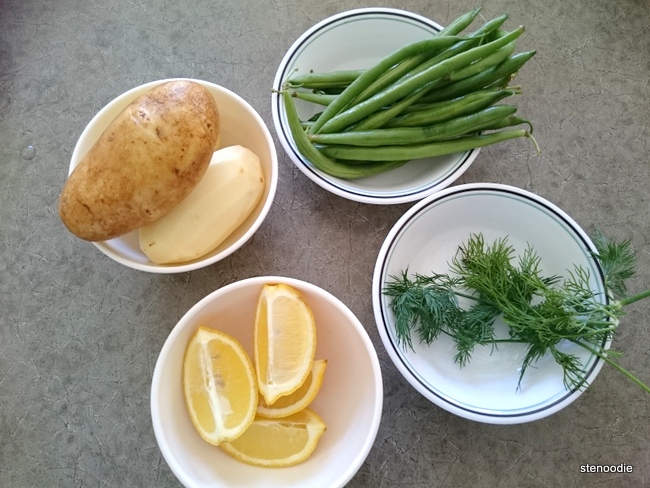 Washed, dried, and cut up all vegetables!

After these were done, it was time to bread and cook the turkey schnitzel!  Opening up the packet of breadcrumbs smelled so good!  It was like walking into an instant bakery haha. 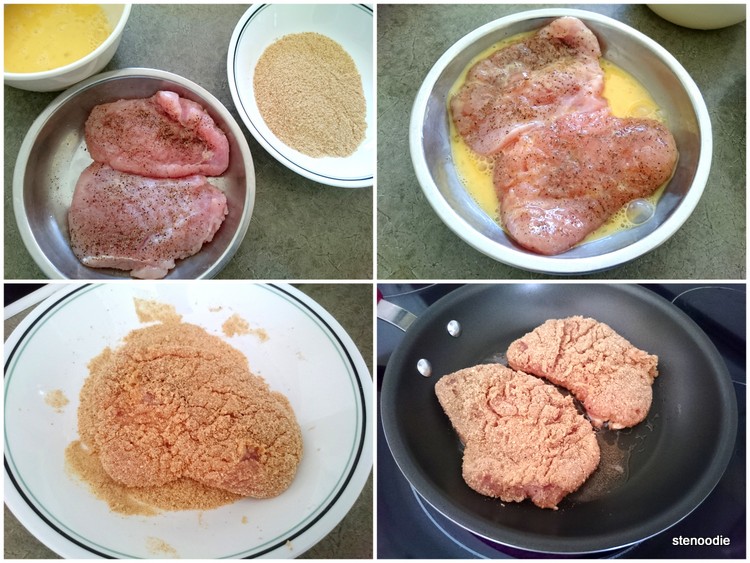 Coating the turkey cutlets with egg and then covering it with breadcrumbs. Then comes the sizzle!

Instead of the traditional deep-fry method of making schnitzel, making this at home meant that I was going to pan sear this one for a quick cooking dish.

After letting the turkey cook for about 4 minutes on each side (adding oil after it is flipped for the first time for a more thorough texture) and until it was golden brown, it was done!

The German potato salad was completed with a dressing made with cider vinegar, Bavarian mustard, lemon juice, and dill.  Mixing the salad together was easy! 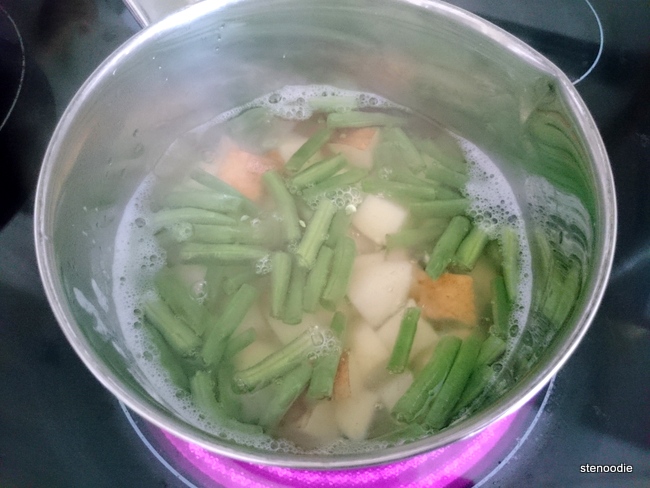 Adding in the green beans to boil together with the potatoes 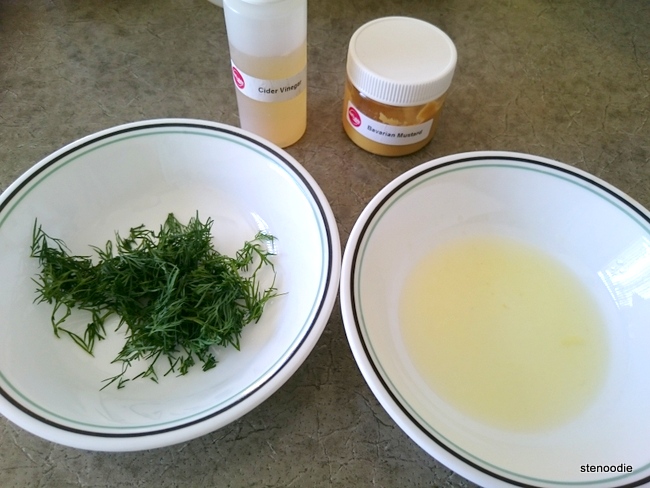 Ingredients to make the dressing ready! 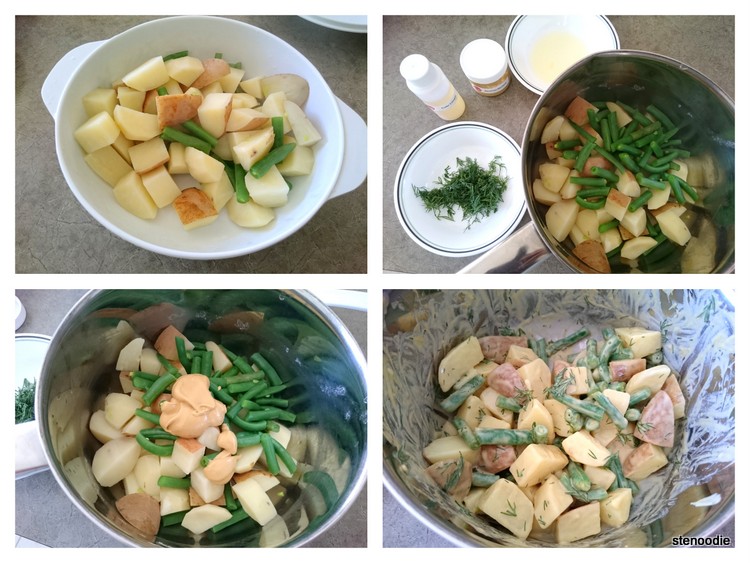 I made the mistake of pouring all the ingredients of the dressing separately into the potatoes and green beans. I should have mixed the dressing first and then mixed it with the vegetables

The last part was to plate the dish and then eat.  (In addition, there was a small tub of pickled red cabbage that was ready to go so I just plopped that on to the plate.) 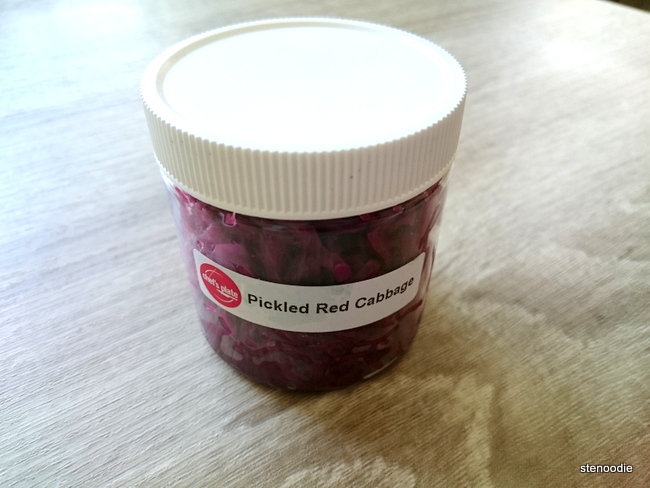 My apologies for my terrible plating… I really don’t know how to make food look good on a dish after I cook it.  Does anyone have any tips on how to plate food better?  Haha. 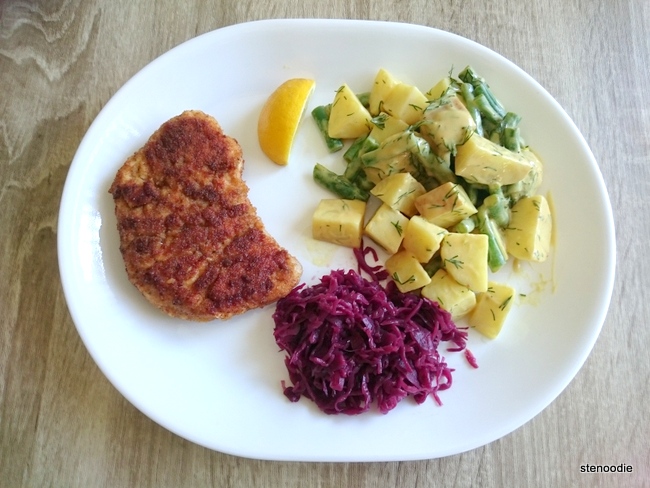 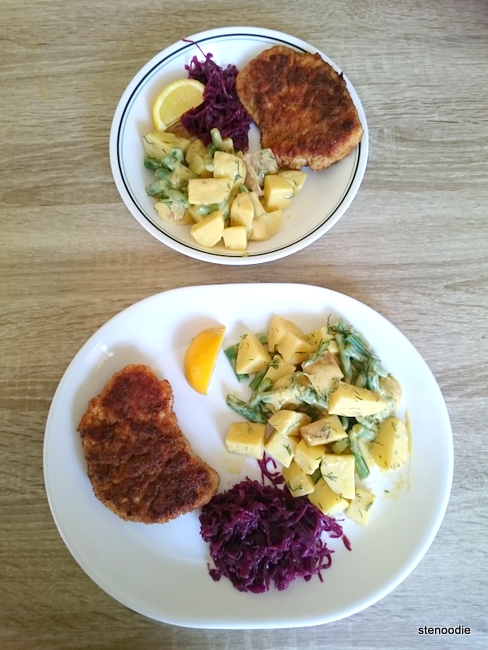 All of this makes two servings

In any case, it was time to eat!  The German potato salad was tangy and the Bavarian mustard really intensified the sour and tartness of the dressing.  This was a great combination with the turkey schnitzel.  The turkey schnitzel was actually great!  It was a little crispy as I cut into the cutlet and it was very juicy inside.  I think it could have been a little more crispier and I’m not sure if that was my own handiwork or whether pan searing it doesn’t achieve the same crispiness as deep frying it.  Nevertheless, I loved the turkey schnitzel.  I had added just enough salt and pepper to it so that it had the perfect flavour with the pan seared egg and breadcrumbs. 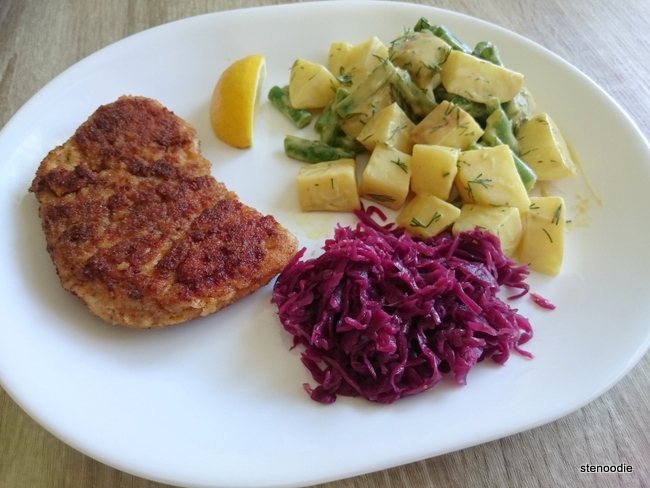 There’s really only so many ways you can plate this. You cannot put the salads on top of the turkey schnitz since it was fried to a crisp and covering it with salad would dampen the crispy parts and both of the salads couldn’t be combined since they both contain different flavours

If you want to try out Chef’s Plate for yourself, you can do so by clicking on this link which will also give you four plates of food for free.  You can also input in the code #freeplatesfromstenoodie when you check out.  Happy cooking and eating!