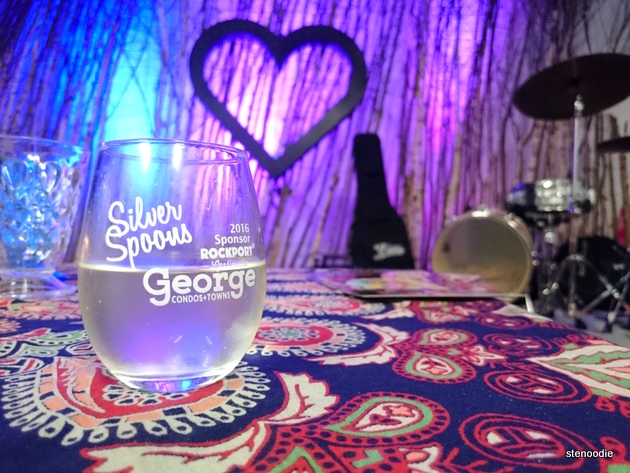 This past weekend was the much-anticipated and highly buzzed-about event at District 28 hosting gourmet food, wine tasting, and art fair from local businesses in Toronto.

Kyara of Silver Spoons had first contacted me about this event in early April asking if I’d like to help them promote their event and also gain access with two VIP tickets and some exclusive wine tasting tickets.

I enjoy food festivals and was definitely up for the project and helping them promote it.  This was the first year that they were hosting it so there wasn’t much information about the event, even weeks leading up to it.  The list of “60+ vendors” wasn’t made public so while I did try my best to share the word about the upcoming event, there simply wasn’t much to start with.

I attended the event opening on Friday, May 13, 2016 at District 28 and decided to drive down to the venue since it was right off of the DVP on Lake Shore and would be easy accessible for me coming from Markham.  The website of the venue, District 28, mentioned that there’d be ample free parking — which reassured me as someone who doesn’t drive often to downtown and thus despise looking for street parking.

When I got there, I was definitely dismayed to find out that the ample parking that was mentioned was non-existent.. I saw many cars parked on the street on Logan Avenue leading to the entrance of the building but no “ample parking spots”…  I circled around the block twice hoping to find some empty street parking but there was none. 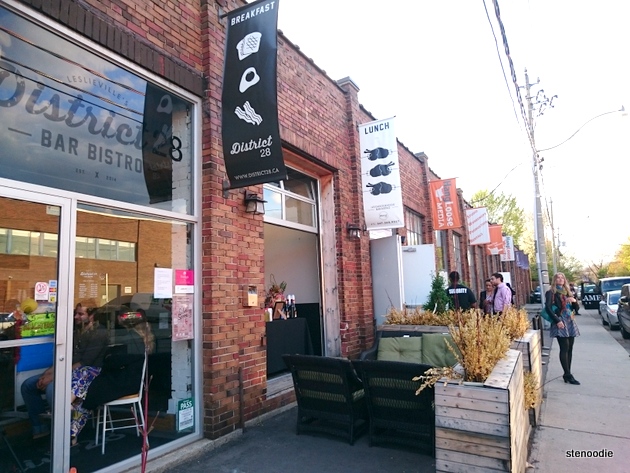 When I drove around the building for the second time, I slowed down and asked one of the ushers standing in the front of the building entrance about parking.  She told me there was an empty lot that I could park in near to the right side (I had already passed by it and it was full) and that she’d prefer that I park there despite it being full.

There was a small line-up to get in and I verified my name and that I was a VIP and received a map of the place, six drink tickets, and was told to pick up a wine glass that was on the table.  There were no other introductions or instructions as to how the event would go. 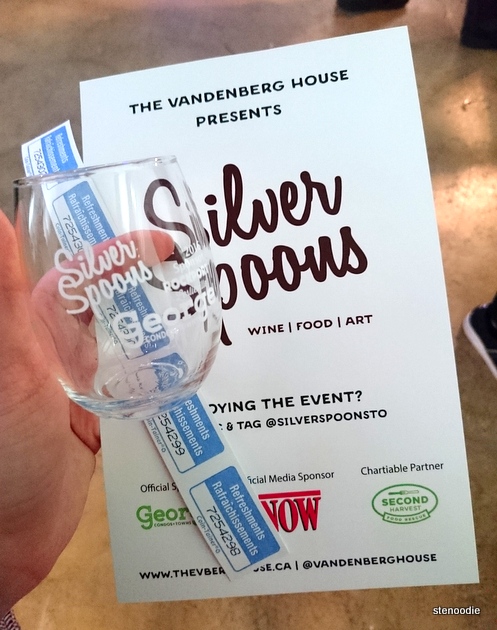 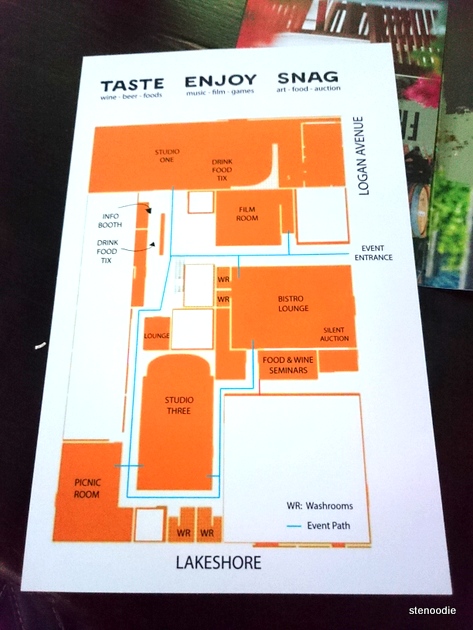 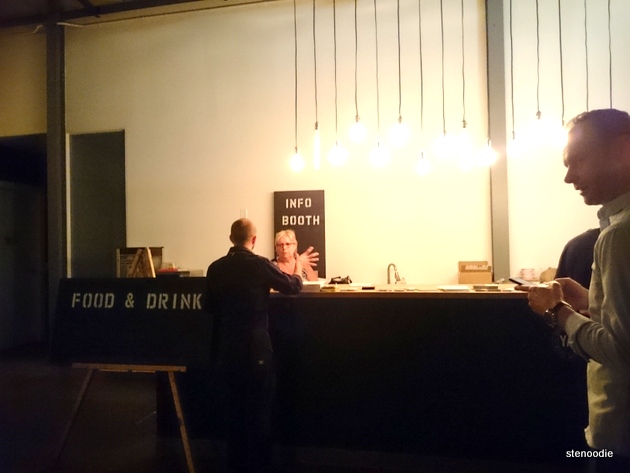 We took a quick look-through the area and as a foodie and food blogger, I was disappointed at how little food vendors there were.

There were a lot of drink vendors like beer, spirits, and wine, but not many ‘food food’ vendors.  There were also a couple of artisan local bread companies that gave samples. 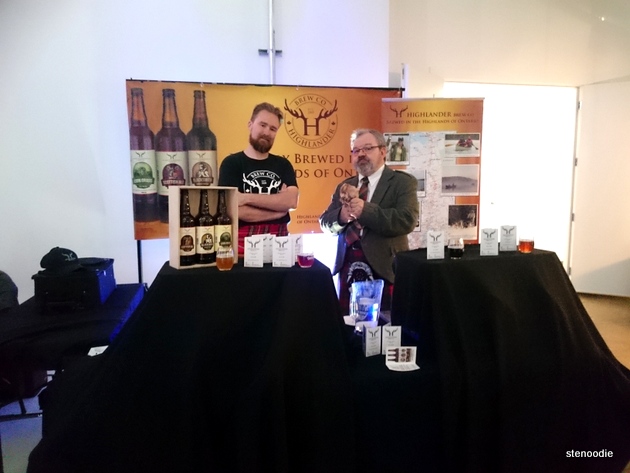 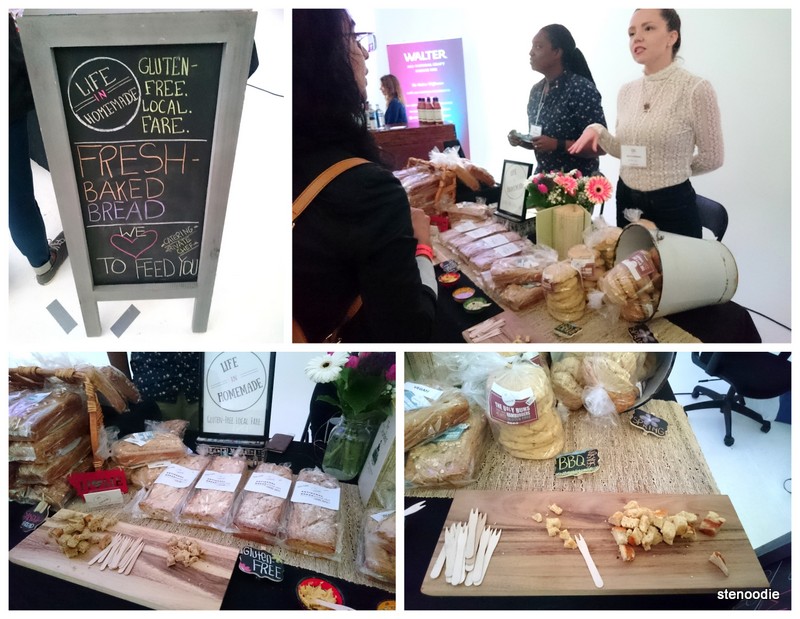 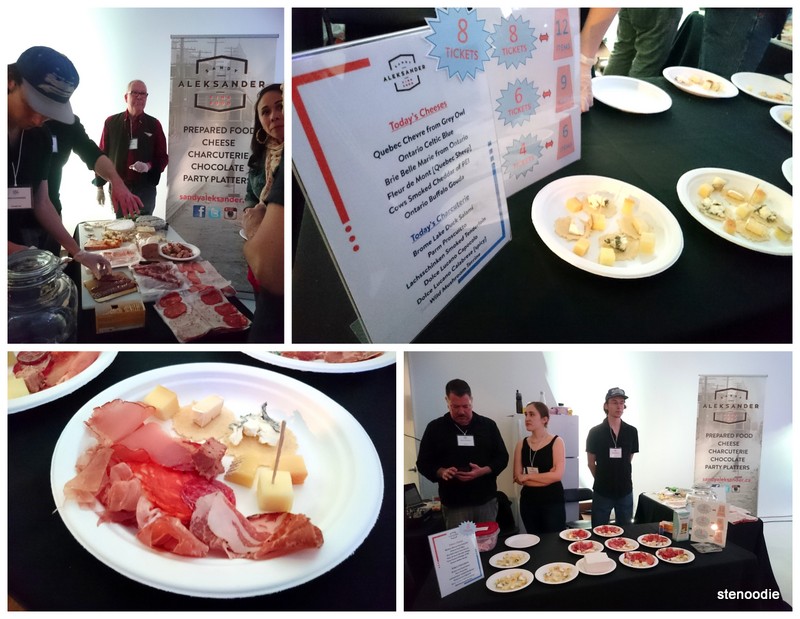 The food vendors that were there offered food starting from two to six food tickets.

I tried a bit of the Ricotta & Sage gelato that Anh and Tien got from Death in Venice Gelato Co., apparently a well-known gelato place.  I wasn’t very impressed or enjoyed the sage-tasting gelato… 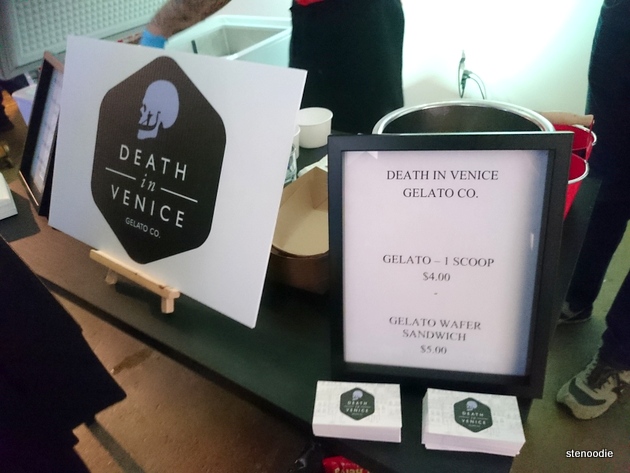 Studio One filled with vendors

I also tried the wasabi coconut chips that Anh and Tien got from Jax Coco.  It was super spicy and had a huge kick to it!! 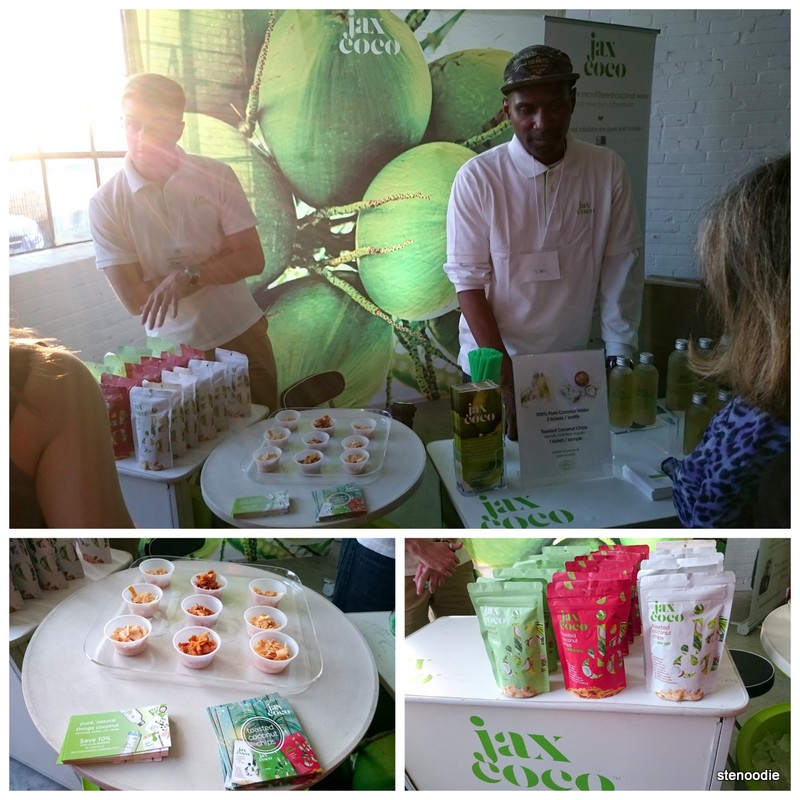 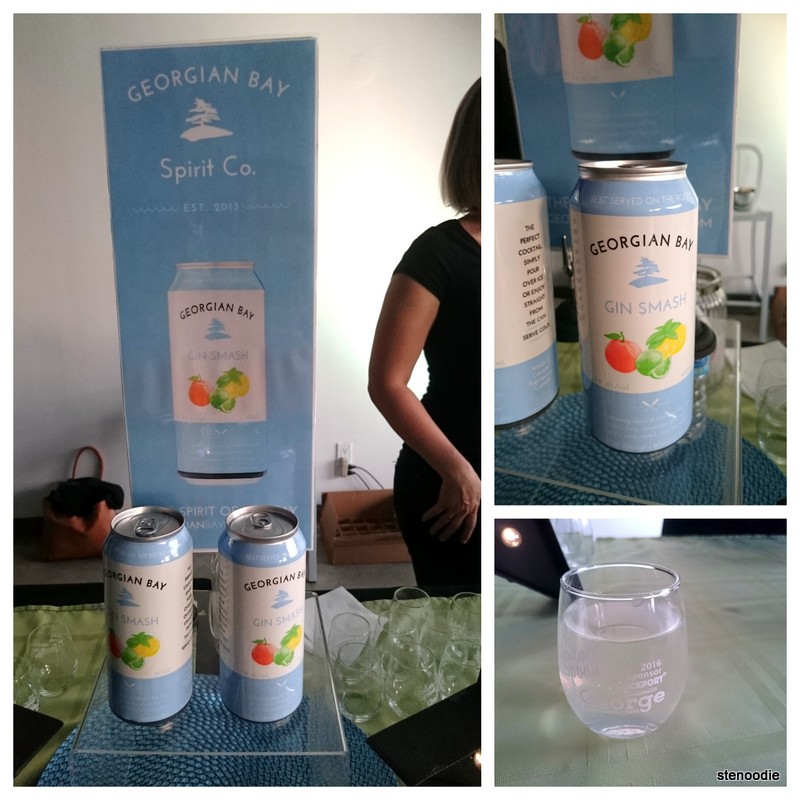 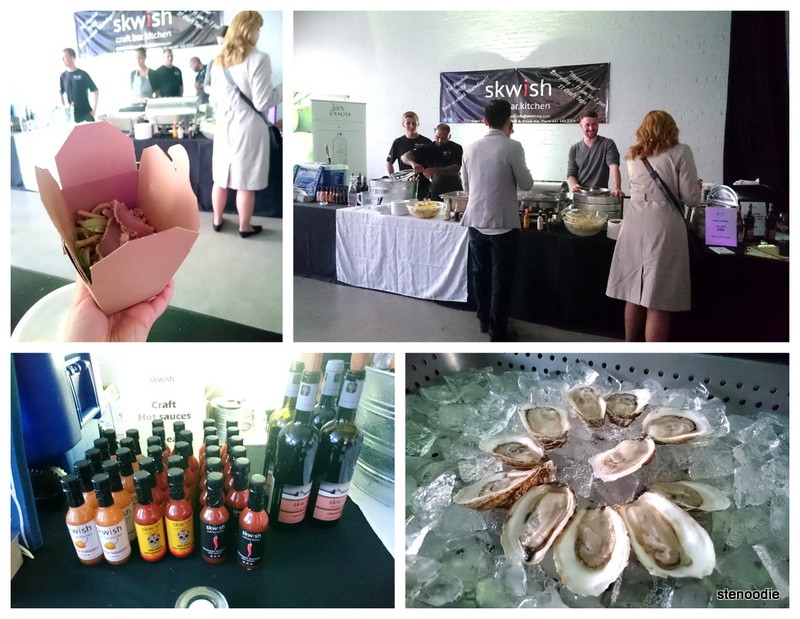 Next, while perusing the Skwish vendor and being distracted by the oysters — as I was hungry — I ended up getting one of their freshly shucked New Brunswick Beau Soleil oysters and also their Soba Noodle Salad with Seared B.C. Albacore Tuna on a whim.  Because I didn’t look at the price, it turned out that the soba noodles cost six food tickets… which meant my total for both were eight tickets.  Not worth it.

However, the oyster was indeed very fresh, juicy, and smooth.  I wish I had another one! 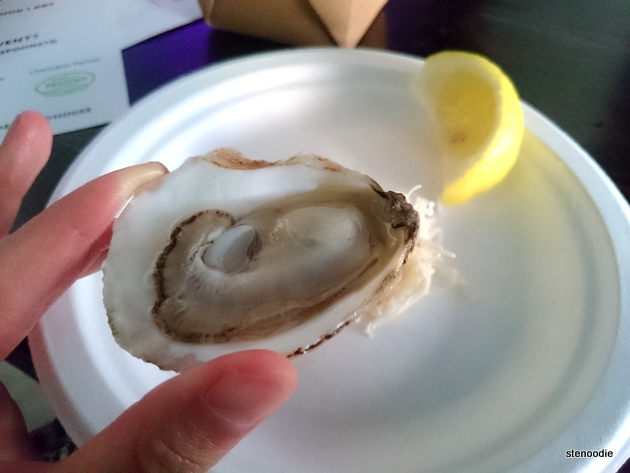 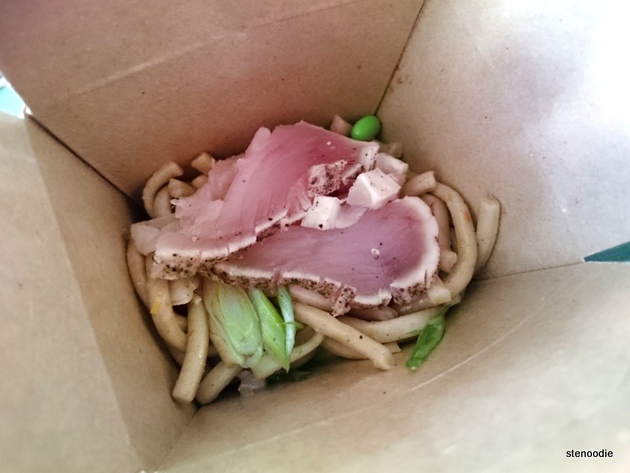 The Soba Noodle Salad with Seared B.C. Albacore Tuna was contained in a paper Chinese takeout box and very cute!  There was a somewhat reasonable portion in it including at least three slices of Albacore Tuna and some green beans.

There was an overall spiciness to the noodles and tuna which I enjoyed.

While eating, a lady and her friend were leaving the event, so she offered us her extra drink tickets.  That should have tipped me off already that many others weren’t having the best time (that early on in the night too!). 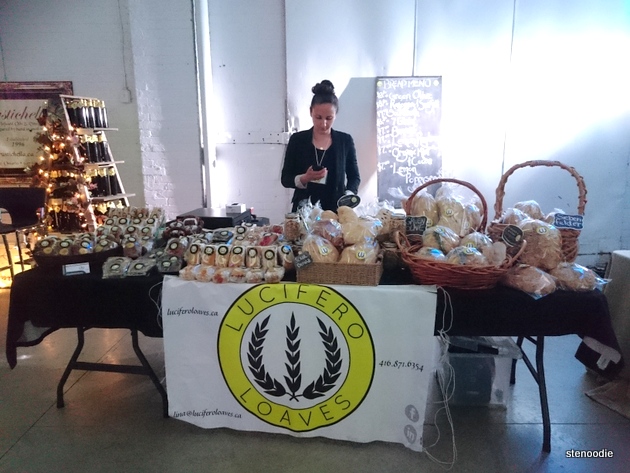 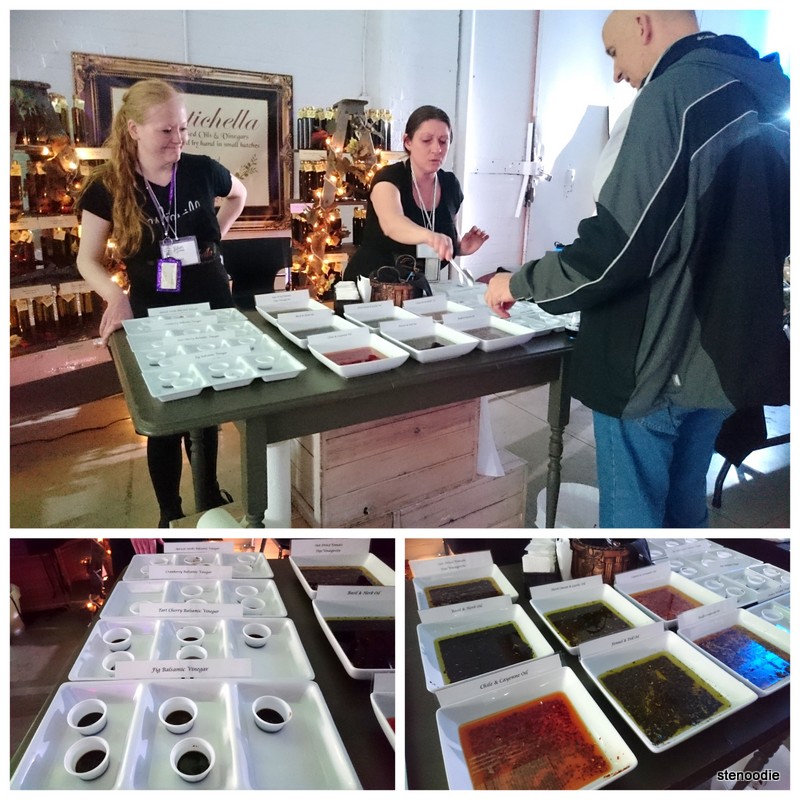 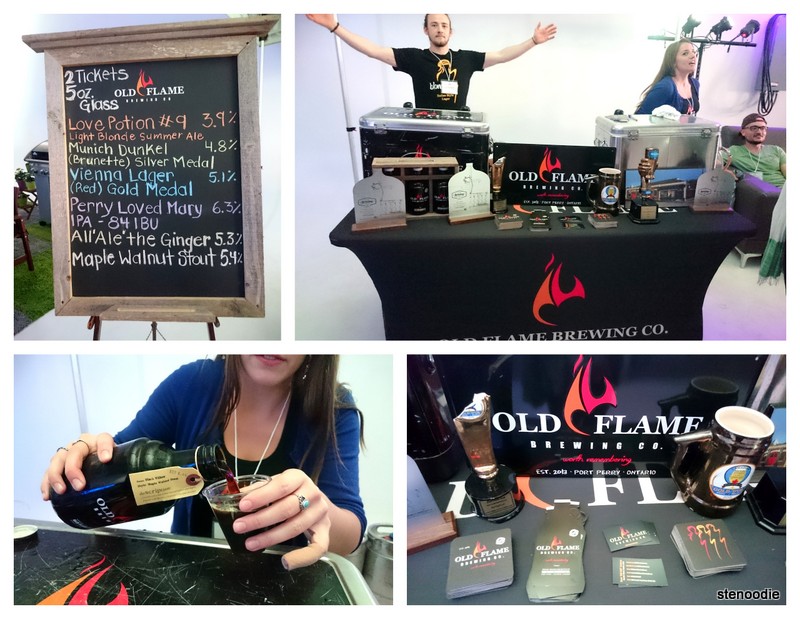 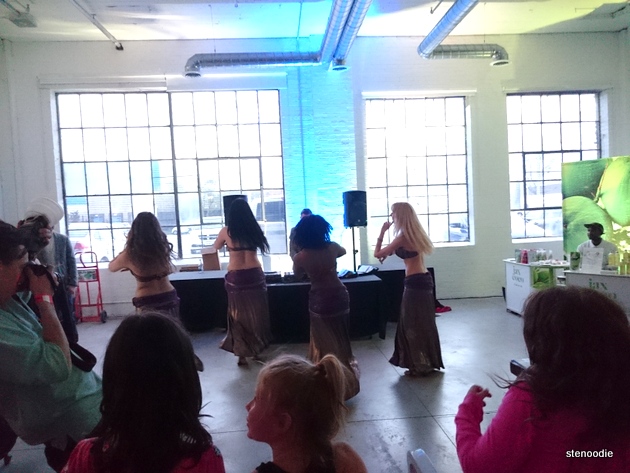 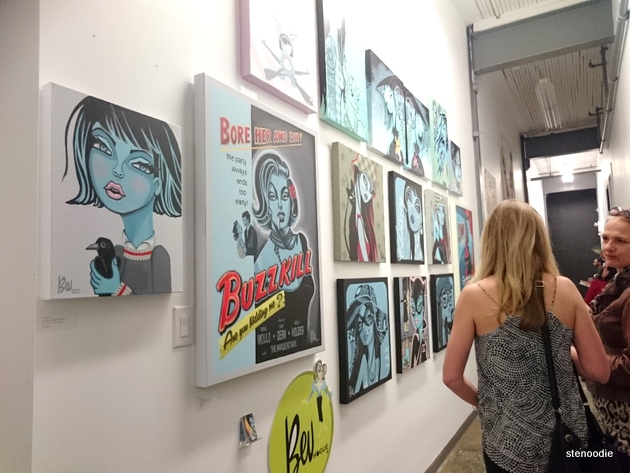 Art work seen on the walls in the venue 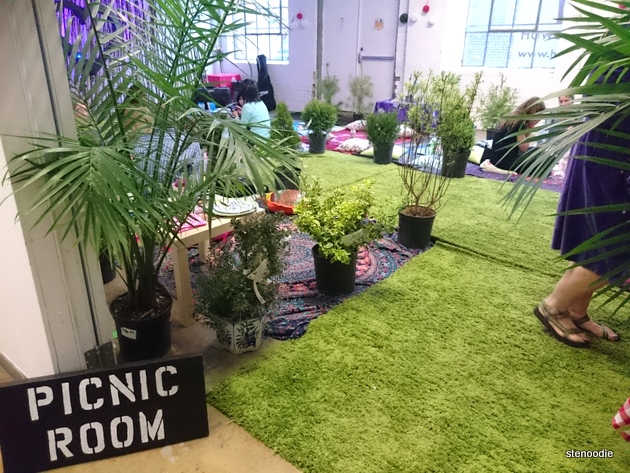 I wandered around and tried some more drinks before settling in on a spot at the “Picnic Room”, aptly named, because there were picnic blankets and throw pillow, shrubs, and potted plants set to a green landscape backdrop that looked like you were outdoors.  There was a band playing and it was interesting to spend some time here enjoying the atmosphere.  Everything gave off a hipster and chill vibe. 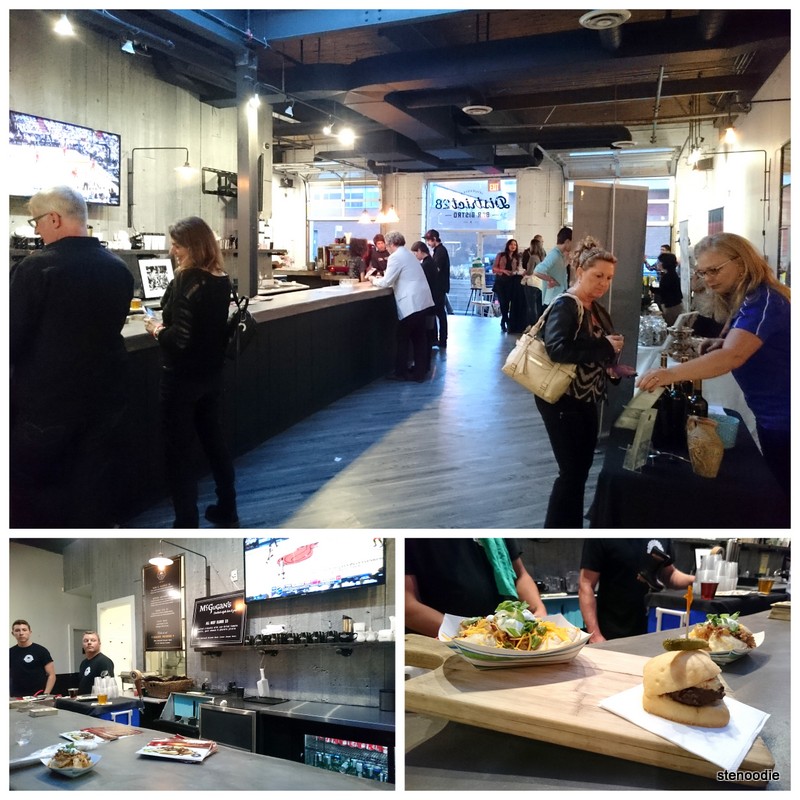 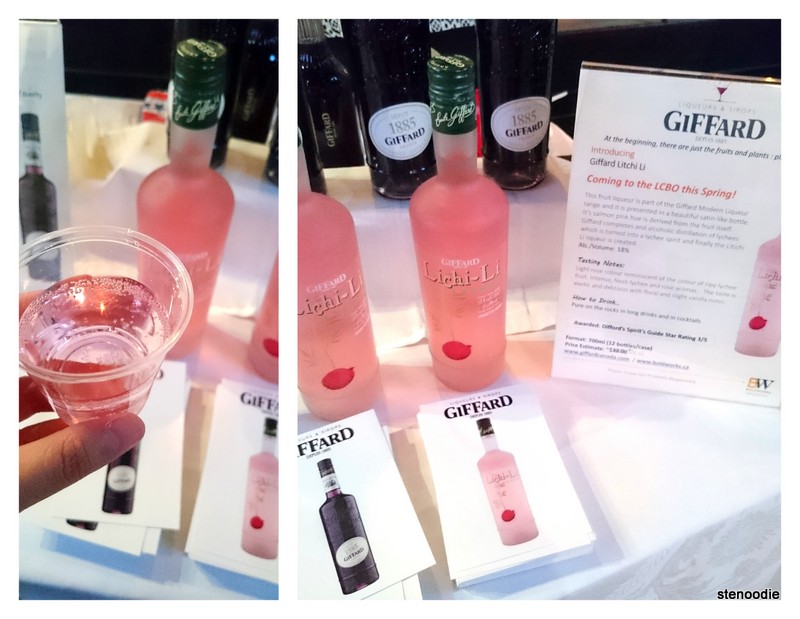 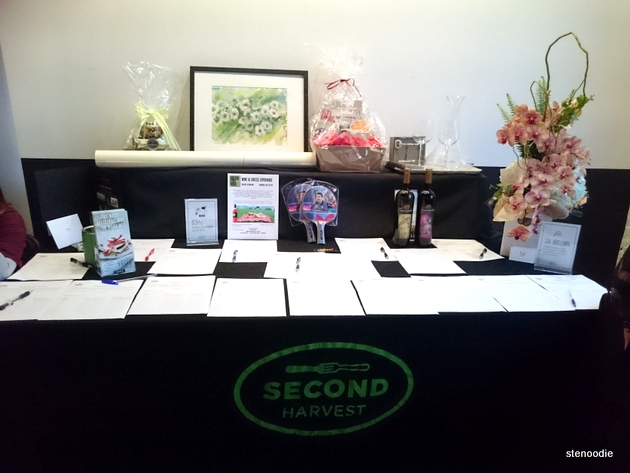 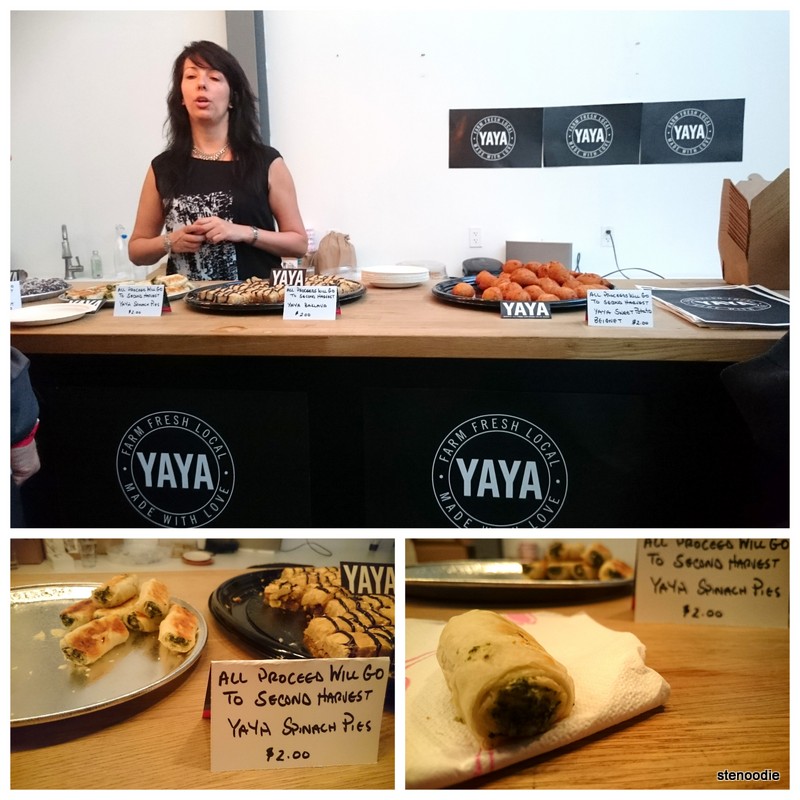 Before I left, I used my last two food tickets for the Spinach Pie at YAYA’s. (Other than the oysters, that was the only other item I found costing only two food tickets.  While I did want to try the cheese and cured meat platter from Sandy Aleksander or even the Spam Musubi from Liko’s, it wasn’t worth spending another $10 on food tickets [$10 of minimum food tickets seemed inconvenient to purchase food tickets for when there really weren’t that many choices to pick from]).

The YAYA Spinach Pie was a tiny rolled up pastry of spinach and cheese.  It was small and cold and there was nothing too great about it.  Why would this be worth two food tickets/$2?!

After that, I made use of my extra drink tickets and got a ‘Forbidden Cider’ from Hobb’s & Co. before returning back to the Picnic Room to enjoy the light drink. 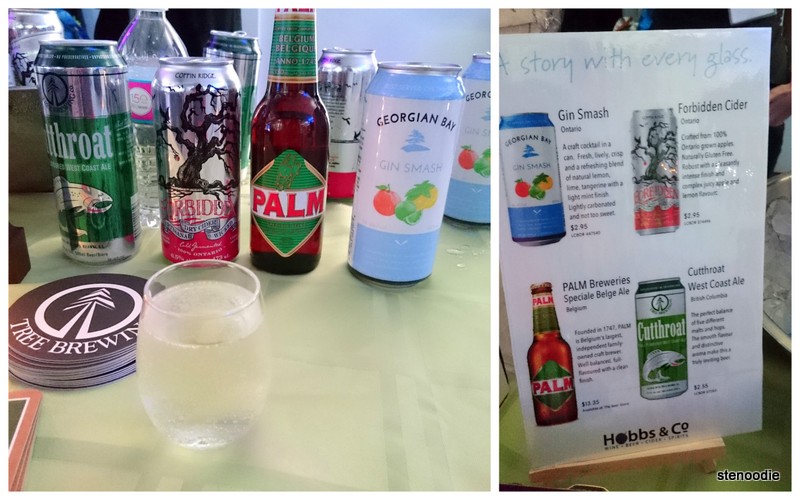 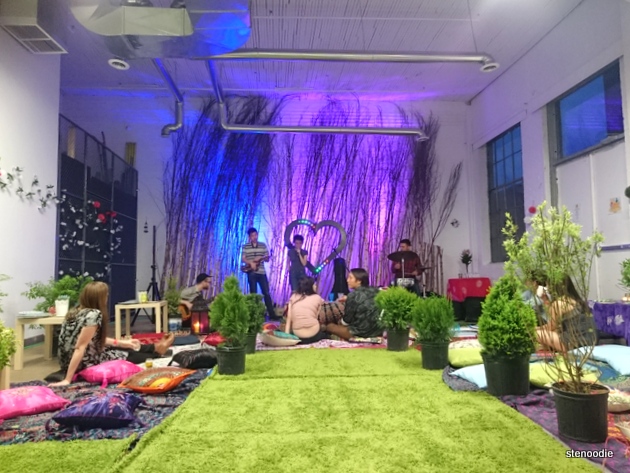 Another visit to the Picnic Room

As I got up to leave, I realized Jen from Gastroblog and her friend were there too and we chatted about our thoughts of the event.  They also weren’t impressed by the event.  Too little vendors, not enough of a culinary experience, and overpriced — good thing we had all been invited there otherwise there was no way we’d voluntarily choose to go to spend the $30 entrance fee and spend extra on food tickets.  They did like that it was a comfortable event since there weren’t many crowds like there usually would be at food festivals.

I wonder how the all-day Saturday event went.  Friday evening spanned from 7 to 11 p.m.

I can see how Silver Spoons would be a nice casual event for a date or a small group of friends that are into beer and light snacks.  However, no entrance fee and more reasonably priced food items would have been nice. 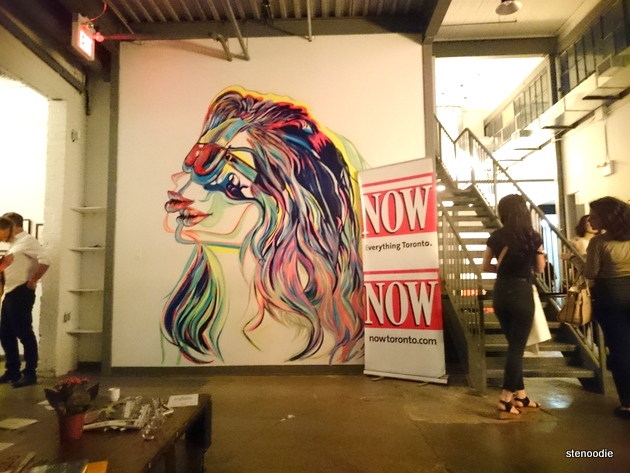 Mural on the wall

The event was sponsoring the charity, Second Harvest, a food rescue program that helps to reduce food waste by picking up donated and surplus food to the communities who need it — thus, giving them a second meal and meaning behind their name.  I am a big supporter of Second Harvest since becoming aware of them several years ago and I was glad at least that they were being promoted and exposed. 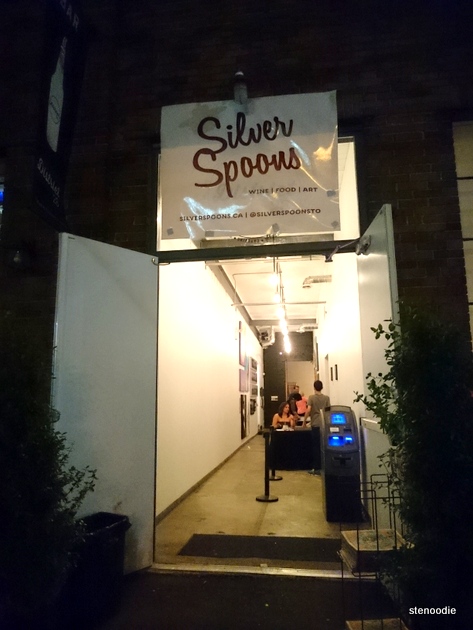 I also liked how we were given small wine glasses to have the drinks from the vendors.  This reduced cup waste and we all had a nice little souvenir from the event as well!

Thanks again for the opportunity to attend my first Silver Spoons event.  I think there is more that can be done to improve the event to make it better.  Looking forward to another year with more food vendors and more options! 🙂

FTC Disclaimer:  Although Silver Spoons invited me to a complimentary tasting to showcase their event, the opinions expressed here represent my own and not those of the company.