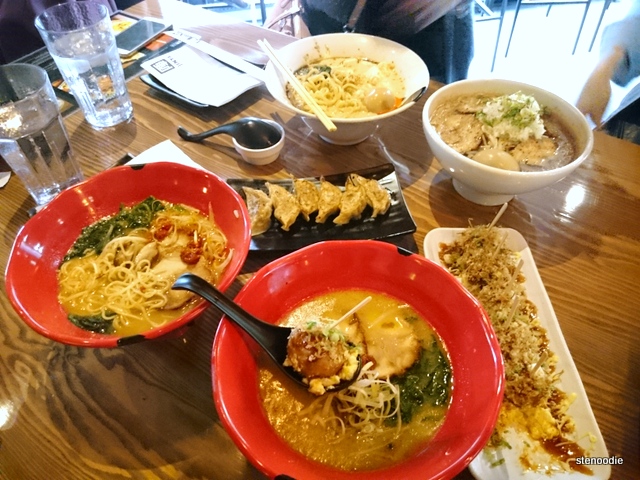 A few friends and I decided to try one of Toronto’s newest ramen bars this week called Jinya Ramen Bar.  It is located right at the intersection of Church Street and Carlton Street across from where the Loblaws is in downtown Toronto.

Grace and I had actually just arrived from the Paramount Fine Foods Yorkville tasting so we were full but I definitely wanted to check out this Japanese ramen bar with my friends since we had made plans here already. 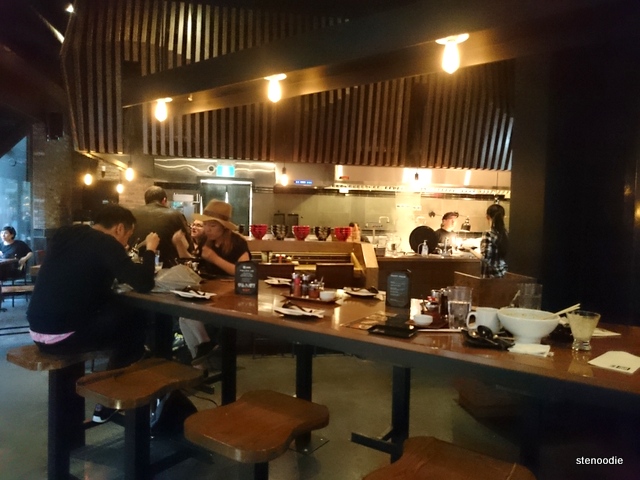 A really nice environment for lunch or dinner

Jinya Ramen bar is actually a Los Angeles ramen chain that has newly opened up in Toronto in mid-May of 2016.  When you walk into the restaurant, you are greeted with the familiar loud greetings in Japanese from the staff — similar to other authentic ramen places.  Grace Y and Wendi were already there and we sat at the long table in the middle of the restaurant.  It was a little dim in the restaurant, but there were plenty of one-seaters or tables near the sides of the restaurant to choose from as well.  Since this restaurant was situated right on the corner, it made the layout of the restaurant very interesting and visually appealing. 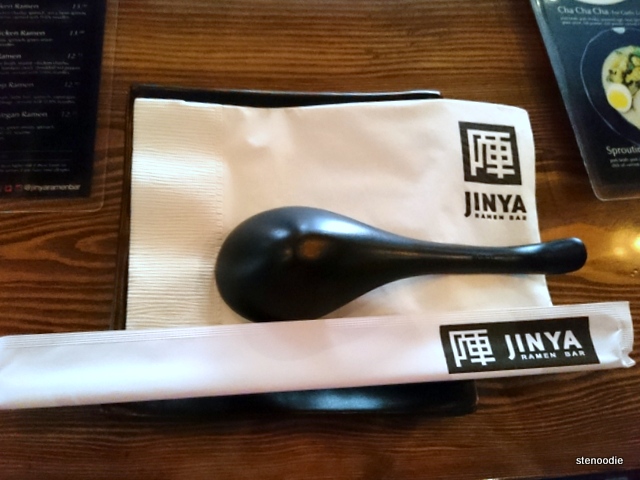 Jinya Ramen Bar exists in many cities in the world, originating from the states

We decided to share some tapas but were disappointed when we found out that their pork bun was actually sold out.  We were teased a little bit at first when the server said it was probably available when we ordered it, but she came back a couple of minutes later to tell us that it was indeed sold out.  Instead, we ordered the Takoyaki and Pork Gyoza to share. 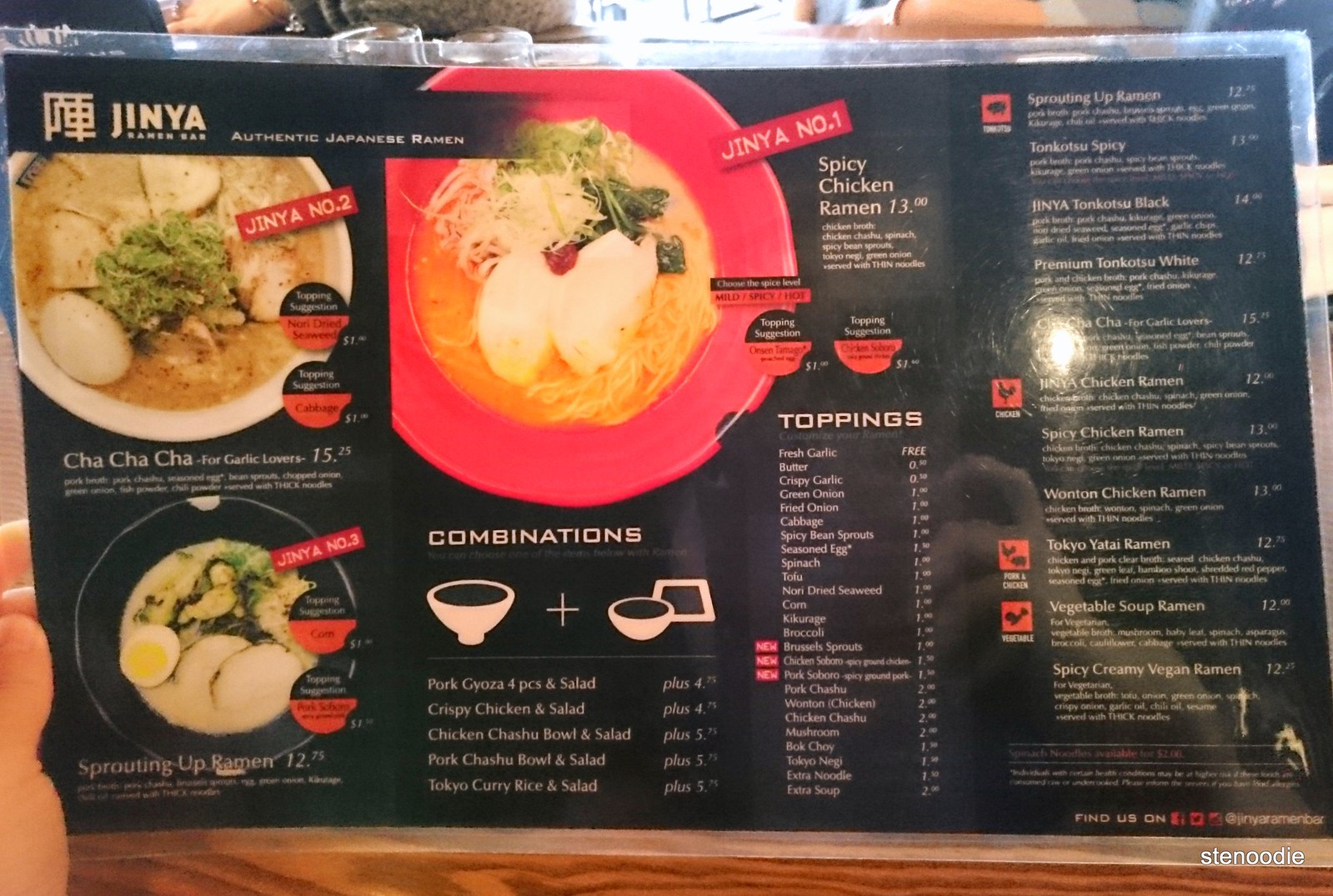 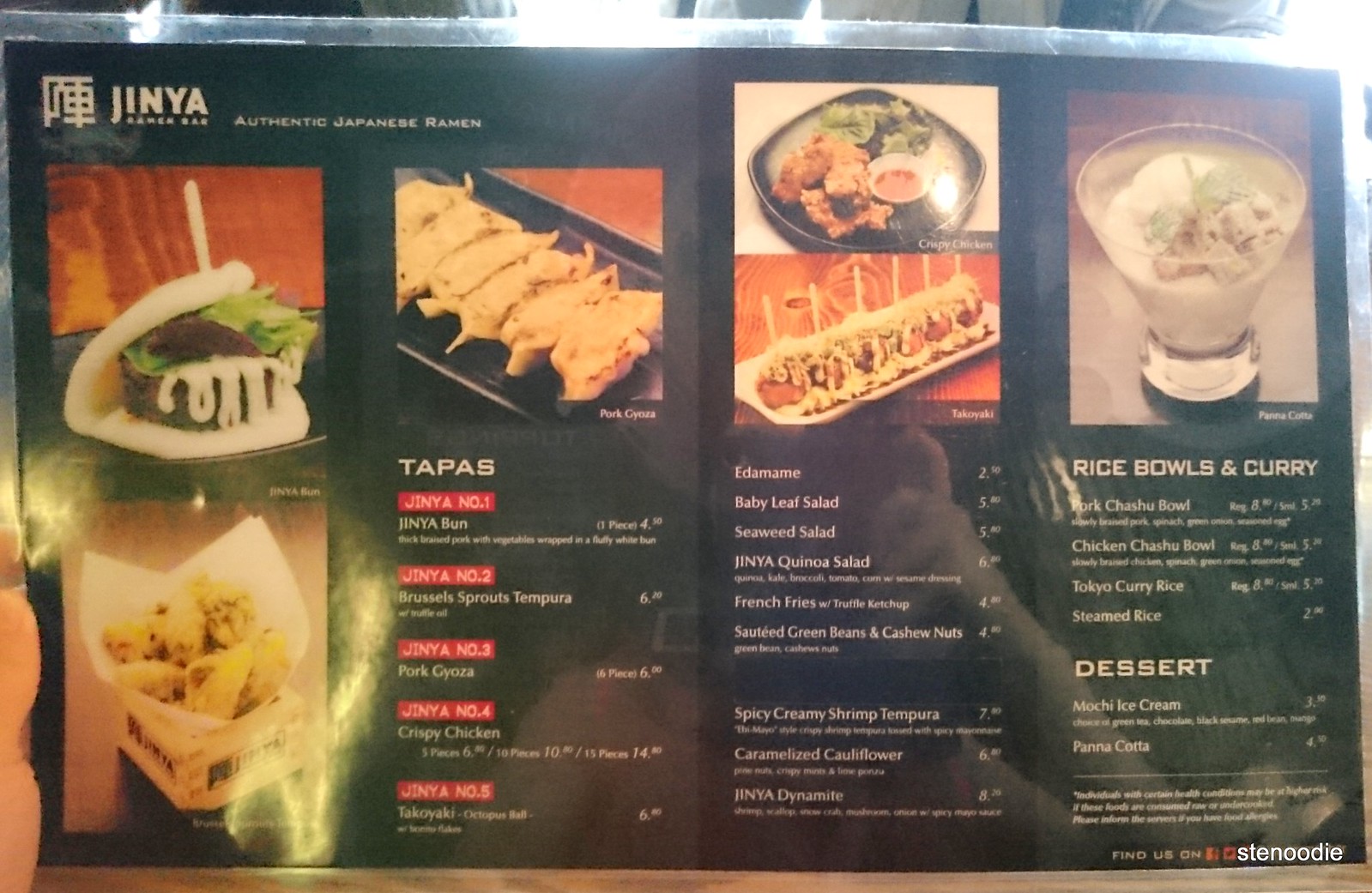 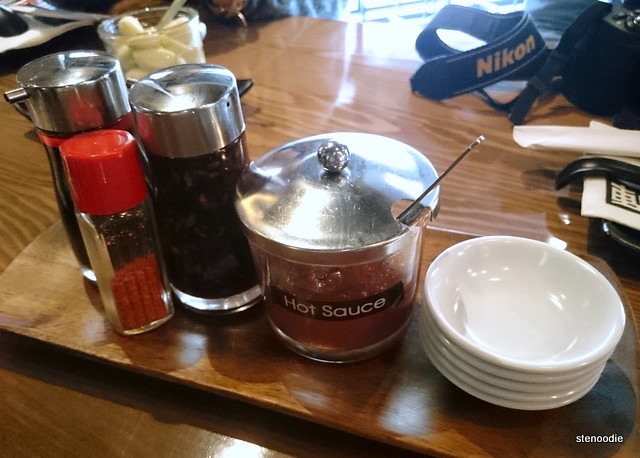 Condiments on the table

The food arrived in a reasonable amount of time as the four of us were chatting over food and blog things.  The Takoyaki (octopus balls) were covered with bonito flakes and arrived in a platter of six and were nestled on a bed of what tasted like egg salad with takoyaki sauce, green onion, and Japanese mayo.  This was very different from regular takoyaki since the octopus balls are usually sitting on bare plates. 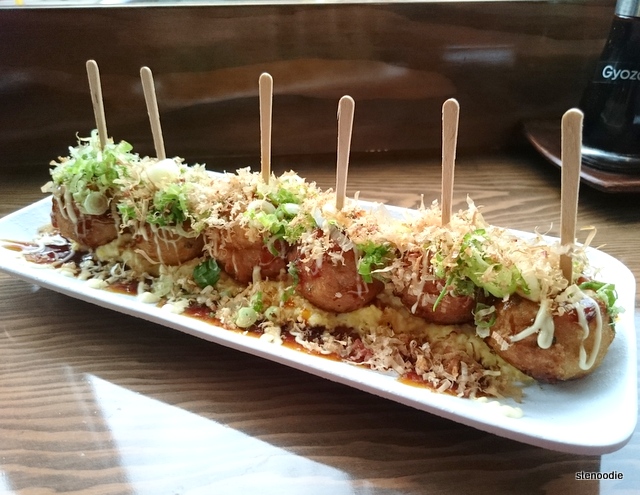 The Takoyaki were a slightly bigger size than normal and very “fluffy”.  It was very soft and could easily fall apart if you weren’t careful when picking it up with a chopstick or the stick that was stuck in it.  I really liked the egg that sat underneath the takoyaki and I could have easily scooped up all of that to eat and mix with rice or something.  The takoyaki balls were decent. 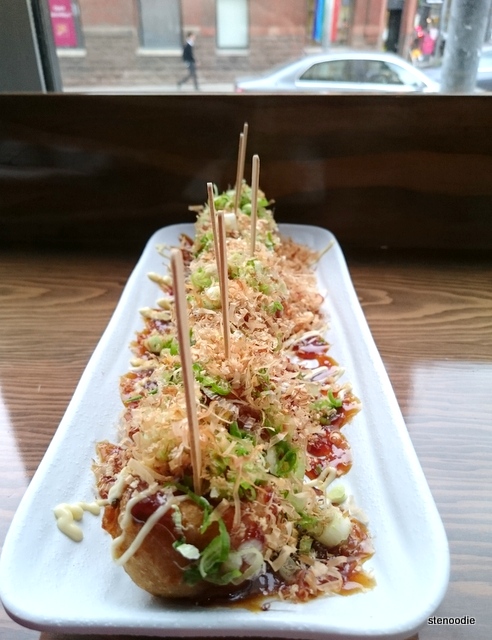 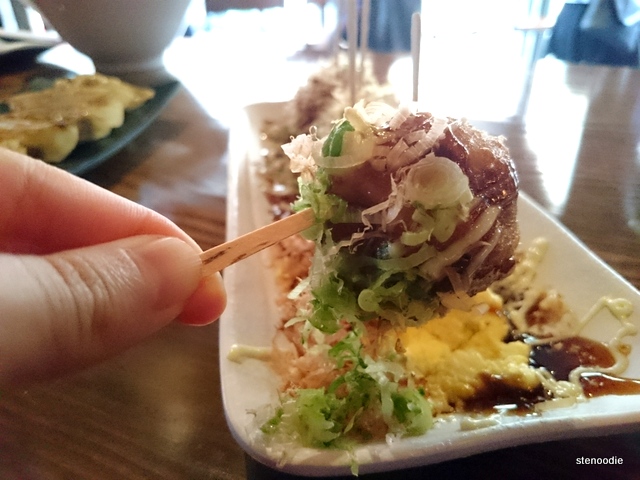 Yum! You can see the bed of egg clearly in this photo 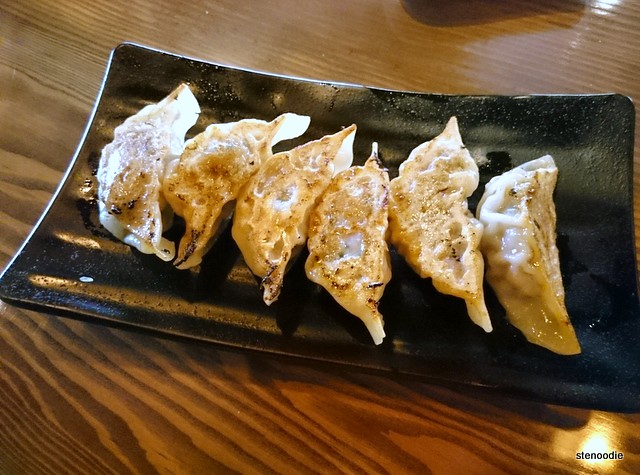 The Pork Gyoza also arrived in six pieces.  There were condiments on the table for us, one of which was labeled “Gyoza Sauce” to accompany this.  I thought that the skin of the gyoza was very thin and wrapped around the pork nicely.  It wasn’t particularly outstanding though; just pork gyoza.

For my bowl of ramen, I ordered the Spicy Chicken Ramen.  It was a bowl of thin ramen noodles with chicken broth, chicken chashu, spinach, spicy bean sprouts, tokyo negi, and green onion.  Usually I order the pork version of ramen at ramen bars, but this Spicy Chicken Ramen definitely spoke out to me.  You can choose either the spice level of Mild, Spicy, or Hot.  I chose the Mild one even though looking back, it would have been nice to try their Spicy level. 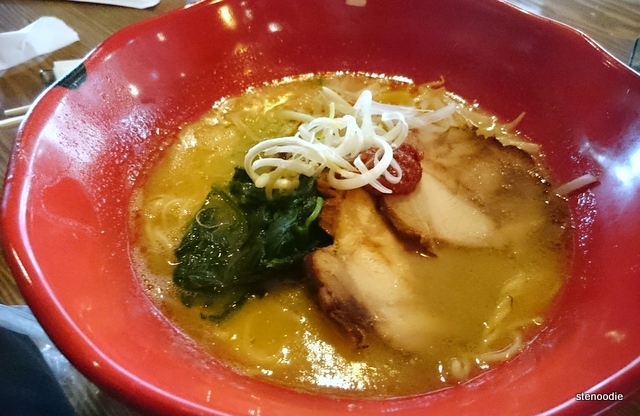 I really liked the thin ramen noodles in my bowl.  I thought that there was slightly less ramen portion than normally expected, which meant that if I was here and I was very hungry, the portion of ramen would have either been just enough for me or not enough.  The chicken broth itself was very strong and almost even a little salty.  I liked the slight spice from the spicy bean sprouts.  The chicken chashu was a little tough to chew through for me and resembled the texture of pork chashu instead of chicken. 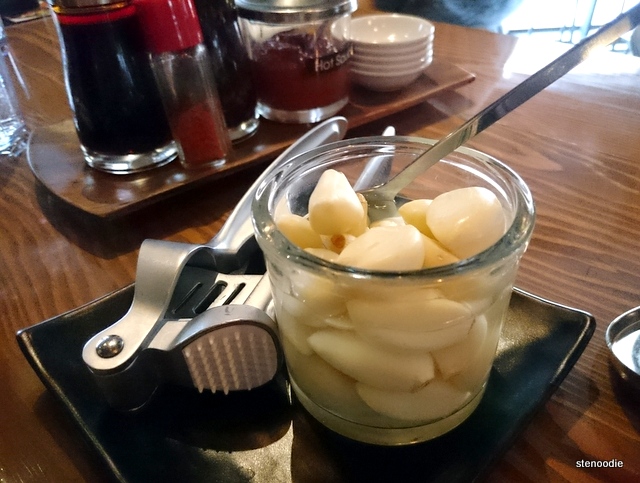 The container of fresh garlic that you could freshly mince into your bowl of ramen. Intense!

Grace Y ordered the Cha Cha Cha (for garlic lovers) which was a pork broth containing pork chashu, seasoned egg, bean sprouts, chopped onion, green onion, fish powder, chilly powder, and served with thick noodles.  I found it interesting that the restaurant actually provided an entire container of fresh garlic to accompany the Cha Cha Cha bowl for your own customization.  This was definitely a bowl of ramen fit for garlic lovers.  Vampires, please stay away. 😛  I tried a little bit and liked my thin noodles better, but the broth was definitely garlic-y too. 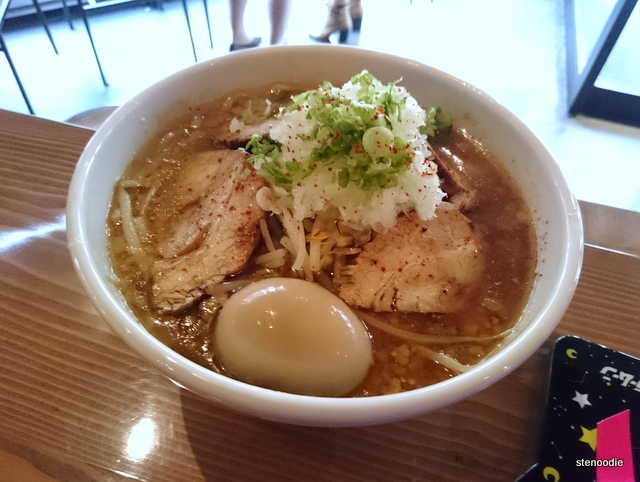 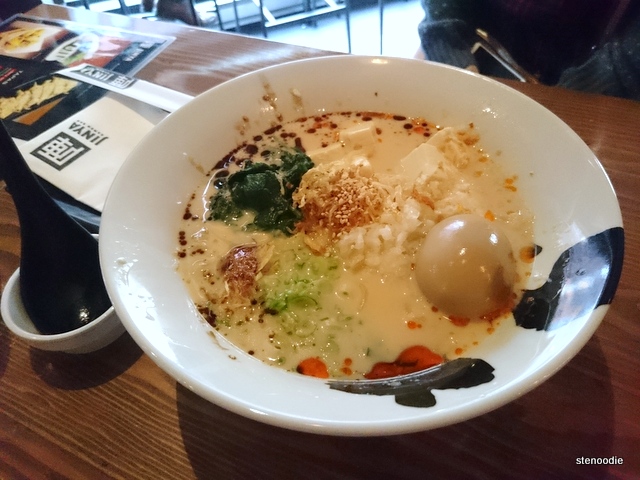 Wendi ventured out of the norm (since we all ordered the bowls she had in mind) and ordered the Spicy Creamy Vegan Ramen.  It contained thick noodles with a vegetable broth containing tofu, onion, green onion, spinach, crispy onion, garlic oil, sesame, served with thick noodles.  She was really impressed with how creamy and tasty the broth was despite it being a vegetarian bowl.  I also tried the broth and really liked the light creamy yet flavourful broth too!  The crispy onion, garlic oil, and sesame definitely contributed to the tastiness of this bowl.

Since I had had an early dinner already, I was full and opted to pack the rest of my ramen home to enjoy later.  However, we couldn’t leave without trying their desserts too!

They only have two desserts on their menu — Mochi Ice Cream and Panna Cotta.  We chose green tea mochi ice cream. 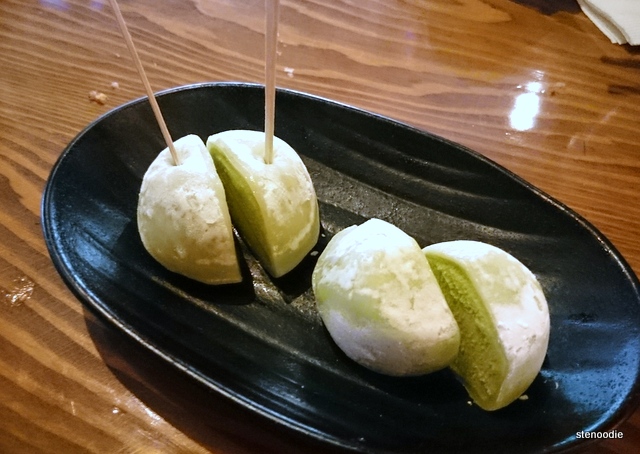 The Panna Cotta was topped with some vanilla ice cream and was a strong caramel flavour.  At first bite, it was very smooth and then quickly turned very sweet that most of us at the table thought it was overly sweet.  It resembled crème brûlée actually.  Grace Y really enjoyed it. 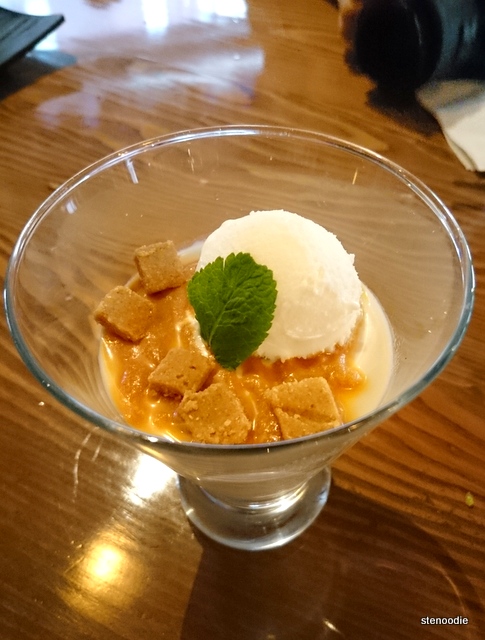 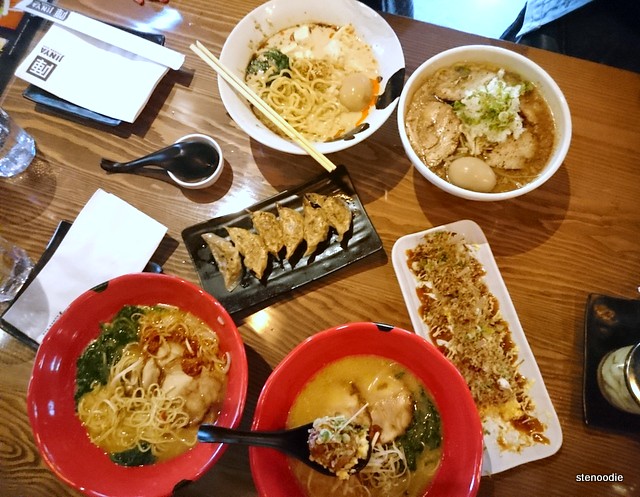 Amazing spread of ramen and tapas! ❤

All in all, I was really glad that I got to try out this new ramen bar in Toronto.  When asked if I would return again, at first I wasn’t sure because there are definitely so many restaurants in Toronto to try out instead of returning to Jinya Ramen Bar.  However, I did enjoy the ramen and tapas, so if I were to come next time, I’d try their Pork Bun (that we didn’t get to try on this visit) and also their Pork Ramen.  They have a lot of other varieties too.  I think this would be a great lunch or dinner place.  There were a lot of people waiting in line too as we approached the middle of our dinner there. 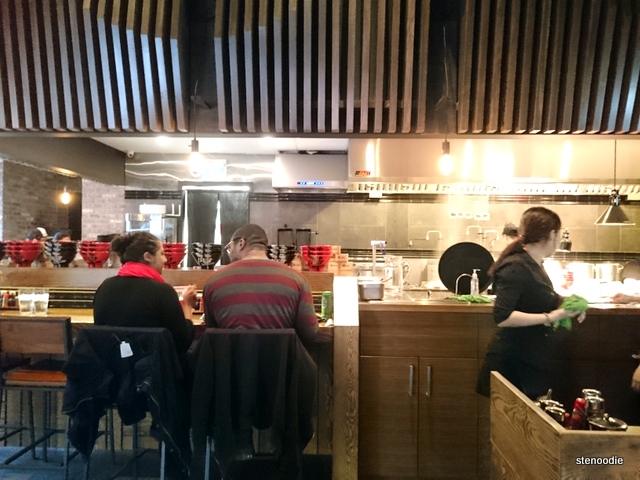 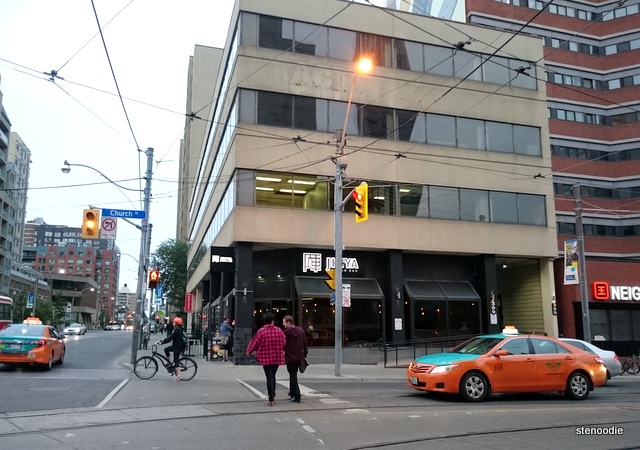