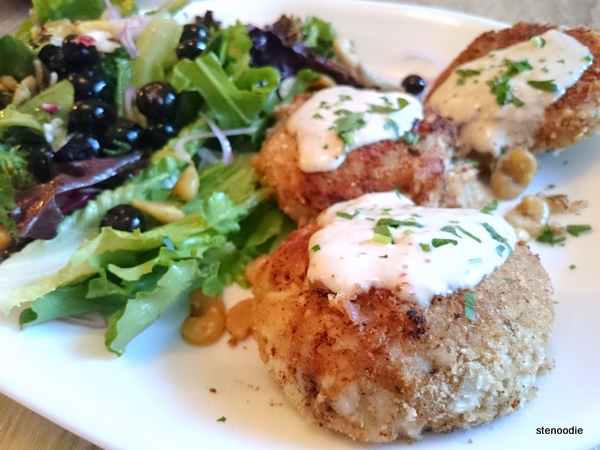 Another day, another amazing meal from Chef’s Plate.  Chef’s Plate is a service that is now offering delivery to the west side of Canada too.  (They previously only delivered to Ontario upon starting their service one and a half years ago).  Congratulations to them and I am so glad that they are doing so well and that many more people can enjoy the delicious pre-portioned and easy-to-make meals from Chef’s Plate too!

For my 14th meal from Chef’s Plate, this was a “Herbed Fish Cakes with Horseradish Aioli and a Blueberry and Field Greens Salad”.  The difficulty level was Hard and had a prep time of 30 minutes. 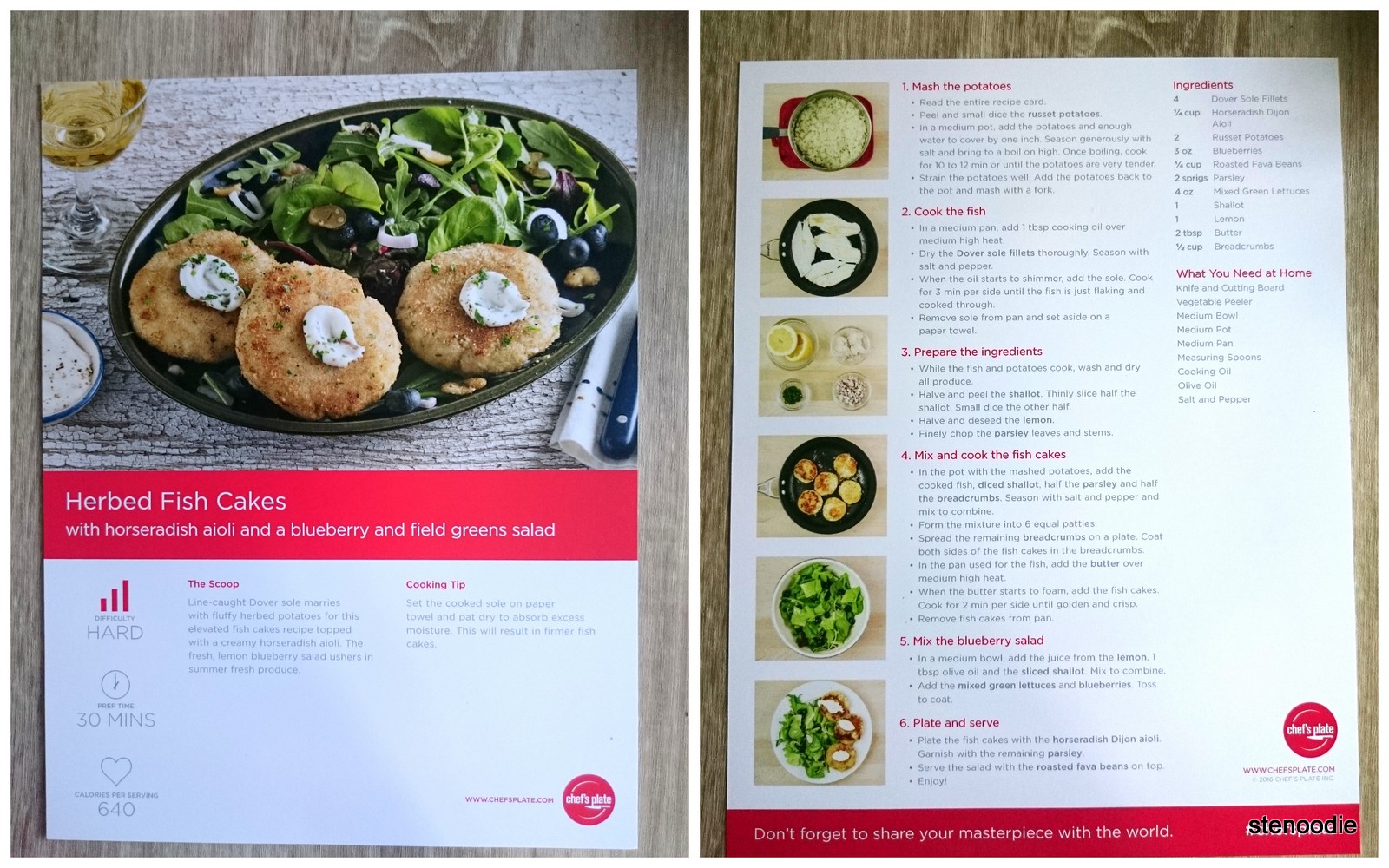 As usual, the ingredients were pre-portioned and packed in an airtight box with ice backs to keep the meat fresh.  This time, I noticed that their non-toxic ice packs are made with natural water components instead of the previous blue-packets that they used before.  New changes to their service! 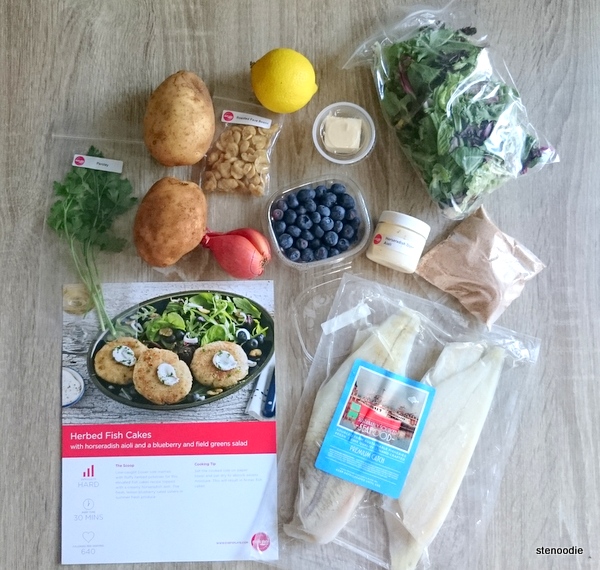 Ingredients for the Herbed Fish Cakes

After washing and peeling the potatoes, put them to a boil in a medium pot of water with generous amounts of salts and then strain the water out.  Then, use a fork to mash it up! 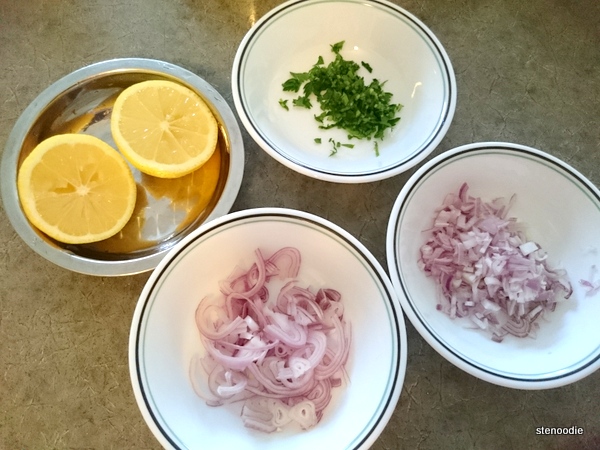 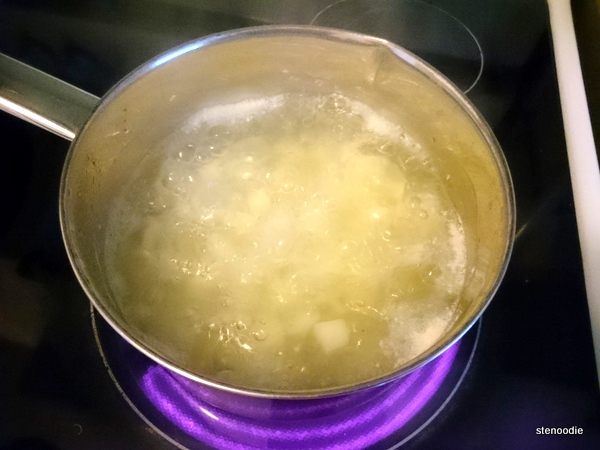 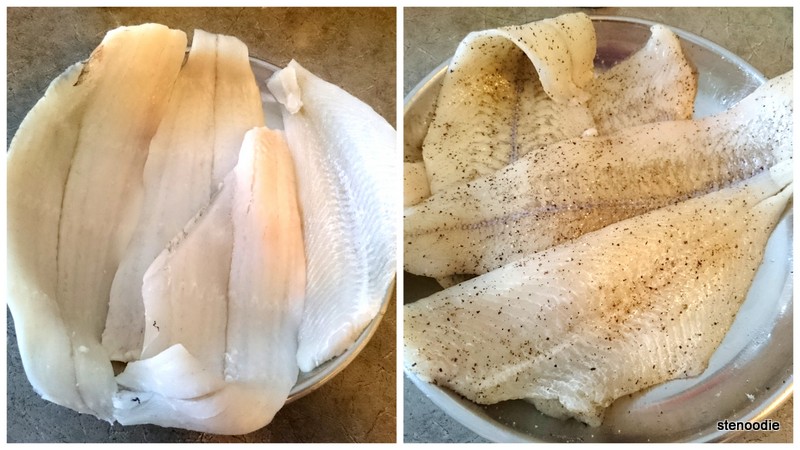 Seasoned the Dover sole fillets with salt and pepper

The Dover fish fillets were seasoned with salt and pepper before they were dried and fried on a medium pan with some cooking oil.  Then, they were set aside on a paper towel before introducing them to the mashed potatoes to mash together.  At the same time, the diced shallots, half of the parsley, and half of the breadcrumbs were added too and everything was mixed together to combine. 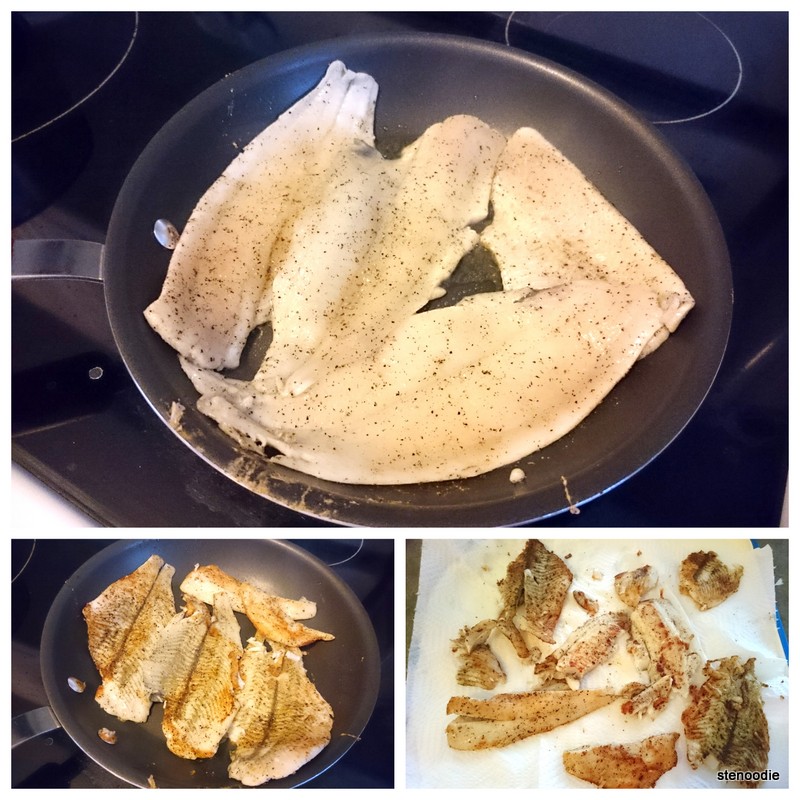 Frying the fillets and then setting aside on paper towels

Form the mixture into six equal patties to be fried later!  But first, cover the fish patties with the rest of the breadcrumbs. 🙂 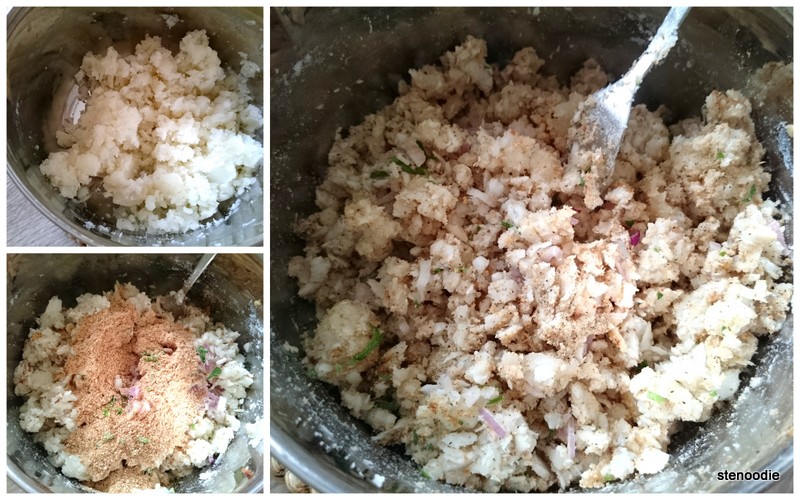 Mixing the mashed potatoes, cooked fish, diced shallots, half parsley, and half breadcrumbs together 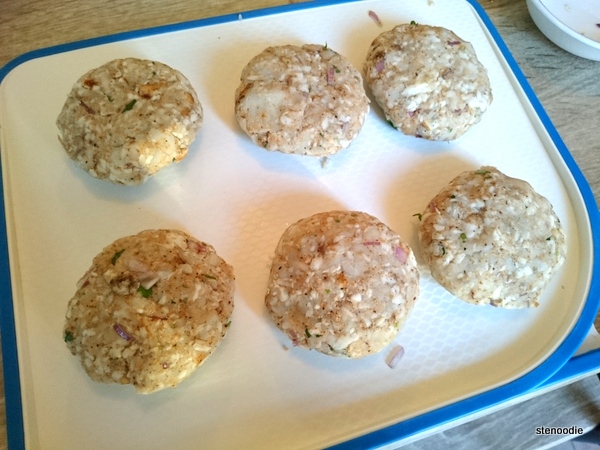 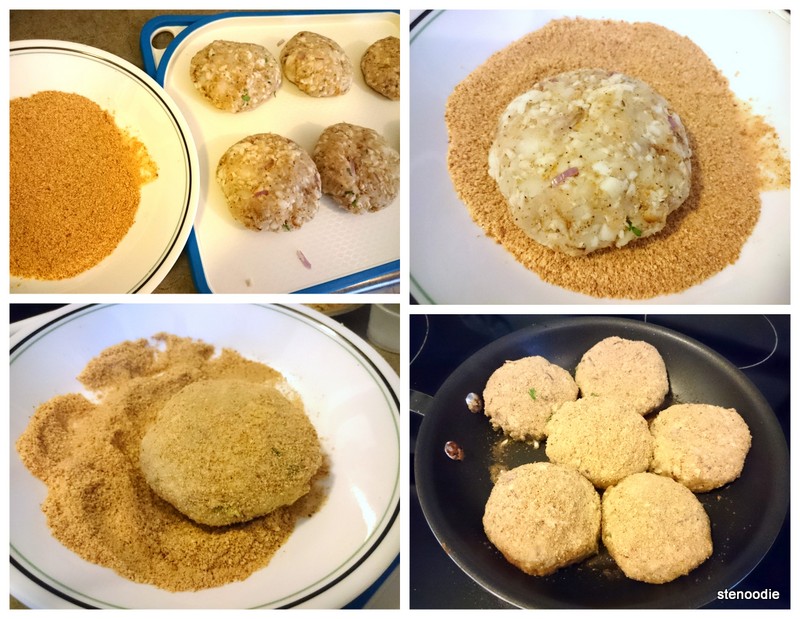 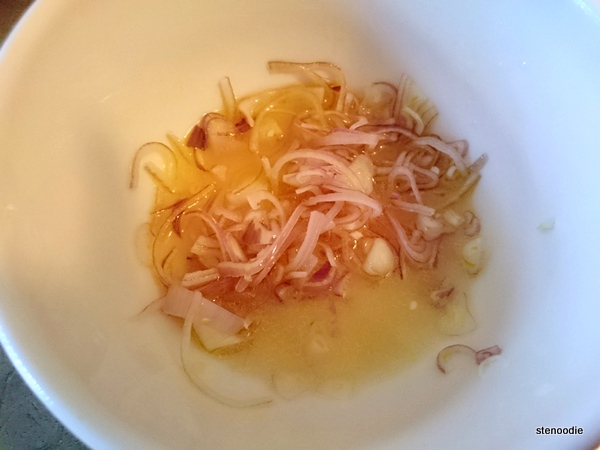 After that, put the butter in the pan and then start frying the fish patties for about 2 minutes on each side.  Meanwhile, I had prepared the blueberry and field greens salad by mixing the juice from the lemon, olive oil, and sliced shallots with the mixed green lettuces and blueberries to put onto the plates. 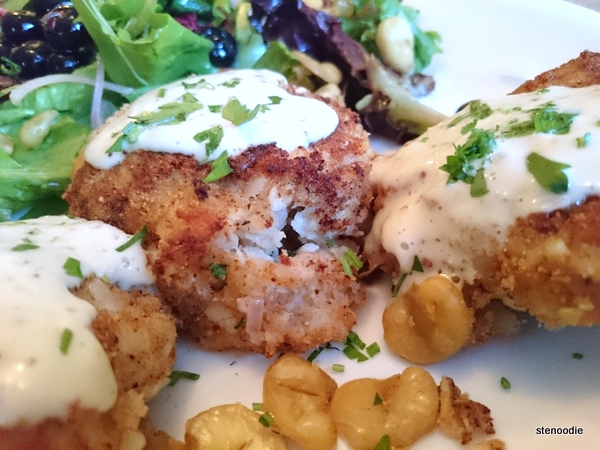 Once the fish cakes were done, on to the plate they went!  The horseradish Dijon aioli was already pre-made and given to me in a container so all I had to do was scoop it on to the top of each fish cake.  The rest of the parsley was garnished on to the plate as well as the roasted fava beans.  Ta-da!  The meal was ready to eat!

The herbed fish cakes were actually bigger than I thought and eating three of these in one sitting was actually more than enough for me!  (But I didn’t want to leave it overnight to eat the next day, so I finished it all.)  The horseradish aioli was a perfect mix with the fish cakes.  I thought that the fish cakes were pretty good but I tasted more of the Russet potatoes than the Dover sole.  It was still a very solid dish though. 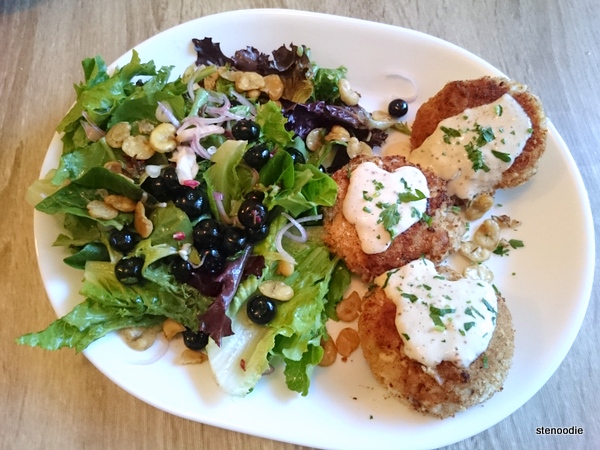 Full plate all ready to eat 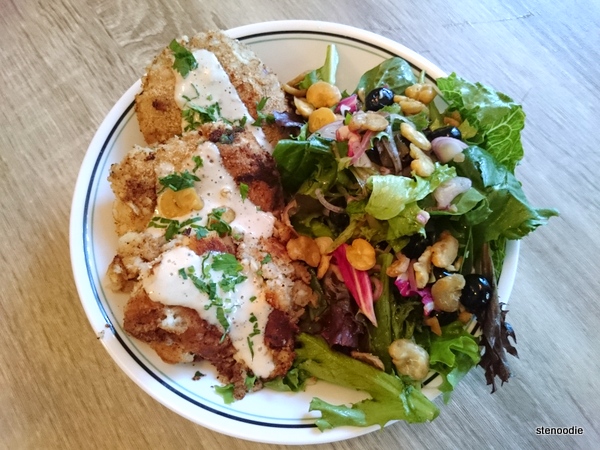 Another way of plating it 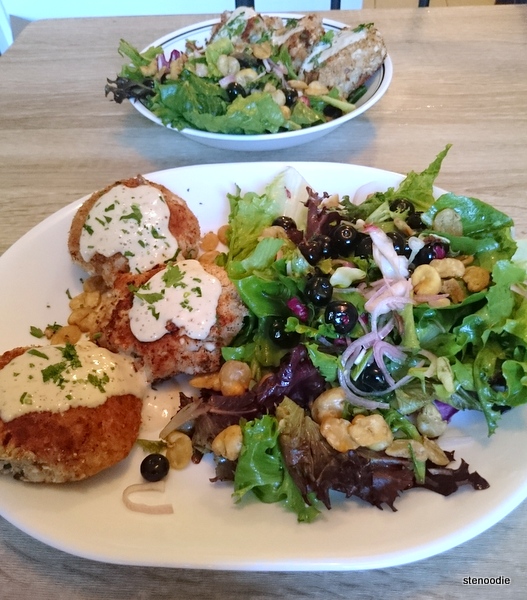 This all made two servings

The Blueberry and Field Greens Salad was a good complement to the fish cakes due to the lemon dressing as a great pick-me-up.  The blueberries were fresh and the roasted fava beans gave such a great crunchy texture to the meal.

Another fine recipe from Chef’s Plate.  I can’t complain!

If you want to try Chef’s Plate for yourself, click the button below for four free plates when you order.  Likewise, you can also input the promo code “#freeplatesfromstenoodie” when you check out on the site. 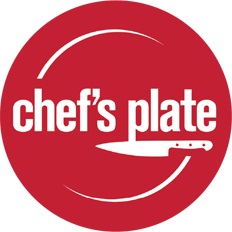