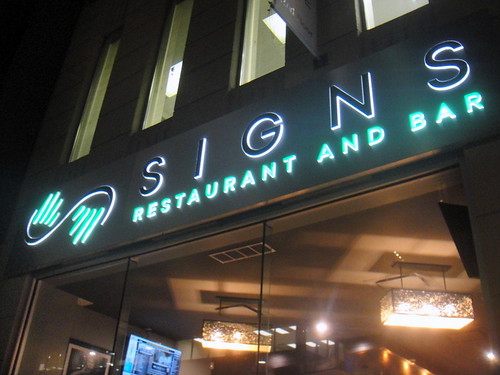 Located at 558 Yonge St in Toronto

Ever since I saw the promotional video for one of Toronto’s newest restaurants called Signs, I knew I wanted to try it out.  It’s the only restaurant in Toronto where all of the servers are deaf and use American sign language to communicate with the guests.  This takes the dining experience to a whole new level.

Upon entering the restaurant (the entrance is exceptionally wide and welcoming), there were a couple of hosts that welcomed me into the restaurant.  I also noticed signs telling guests not to take pictures of their menus which was a first for me to see. 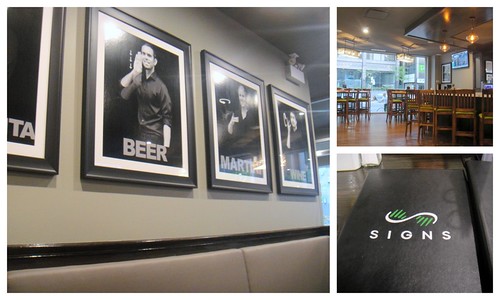 The restaurant was SO quiet and fairly empty

My friend Alice was already seated and shortly after my arrival, the hostess came over to explain to us that our server would be arriving soon.  She gave us a basic introduction of the restaurant and taught us some basic American Sign Language as well.  She also clarified the rule that no pictures were to be taken of the menu (they contained diagrams of how to sign each menu item) but that anything else was okay to take pictures of.  She taught us how to sign “yes” and “no” and “thank you” which I thought were the most useful of everything that I learned how to sign that night. 🙂

The restaurant was fairly empty on a weeknight but the space is large so the parties that were dining in were spread out around the restaurant.  There was also a cheatsheet on the table that taught us how to say things like “Hi, how are you?”, “My food is good/bad”, “thank you”.

Shortly, our server arrived and our host did a short translation of the things he said before leaving us.  We were able to understand what he was saying as he signed it.

We placed our orders in sign language and then had fun looking through the cheatsheet to learn how to say certain things. 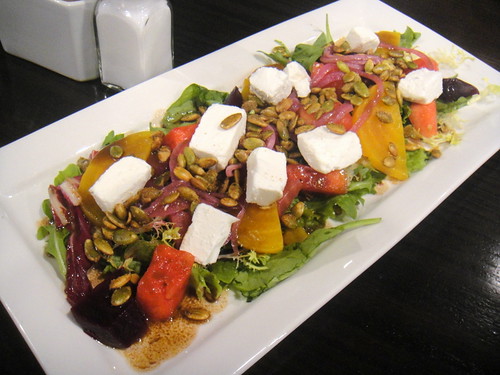 I ordered a salad that was very refreshing and tasted great.  It was a beet and watermelon salad with lots of feta cheese and pumpkin seeds.  The blocks of feta cheese littered throughout the plate and it was such a colourful and pretty dish. 🙂  I don’t usually order salads but since I had my detox on my mind, this was a good one to try. 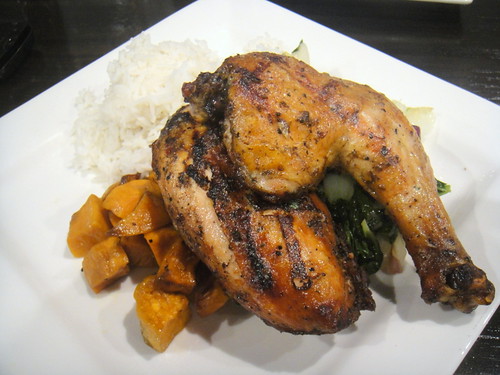 The Montego Bay Jerk Chicken (signed as “chicken” + “Jamaica”) captured my eye.  It arrived with baby boy choy, sweet yams, and a bed of white rice.  The drumstick meat of the jerk chicken was very tender and nicely spiced.  The thigh, however, was a bit rough and not as tender.  I loved the sweet cubed yams!  They were so good. 🙂  The white rice was plain and the boy choy added moisture to the entire plate. 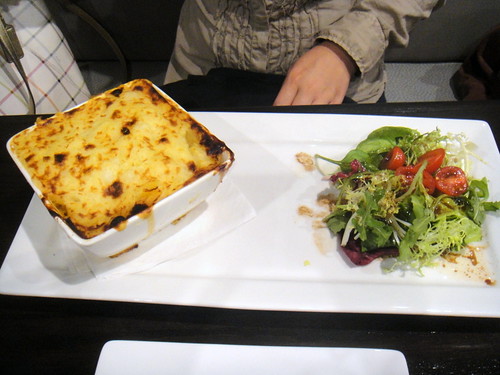 I tried a bit of Alice’s venison shepherd’s pie (which was signed “pie” + “deer”).  It came baked fresh in a square dish with salad on the side.  The mashed potatoes could have been a bit smoother.  I’m glad that I ordered my dish since there was more variety to it.

Unfortunately, in the middle of eating, Alice discovered a piece of hair baked into her shepherd’s pie.  We flagged down the server, received an honest apology, and was shortly given a new (bigger) portion of shepherd’s pie.

One of the unique things about Signs Restaurant is that since most of the communication is done in sign language, there is very little talking.  This makes the restaurant quite pleasant to dine in and not noisy.

Would I come to this restaurant again?  Maybe.  Since I’ve now experienced what it is like to sign to my server, to come back to this restaurant would be just for the food.  They definitely have a lot of delicious-sounding items on the list!