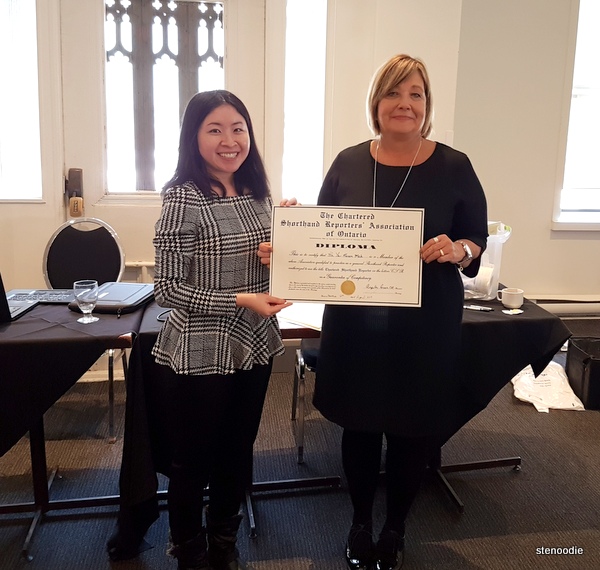 Presentation of my new CSR designation

April 6, 2019:  This year’s Chartered Shorthand Reporters’ Association of Ontario Conference was held once again at the Oakham House at Ryerson University.

Unlike previous years, this was a much more quiet and subdued conference.  I’m not sure exactly of the reason for this although I can personally think of a few reasons including it being a busy time of the year for reporters as well as possibly the topics not being one that all reporters may be interested in.

Despite it all, considering there aren’t many gatherings for our association in general, no matter how busy the time of the year is or how interesting (or not) the topics are, all reporters should take time out of their schedules to show up for a couple of hours and support the association and network — especially those who are actively using the CSR designation behind their name.

In any case, I was there and I really enjoyed the camaraderie and networking with the smaller group this year.

The main activity of the day was an informational and informal Q and A session on CART work and captioning featuring two captioners, Deana Santedicola and Olivia Arnaud.  We definitely had an informal session, but I learned a lot from these steno superstars.  I loved the passion and enthusiasm heard from the stories they told.

Captioning and CART indeed are always another part of the steno field that I am interested in, but something I’m definitely uncomfortable about tackling yet because I fear my skills are not yet up to par.  When your audience are literally relying on you as the eyes and ears for the job, the stakes are high and it’s not about your own personal realtime feed anymore.

Most of my steno colleagues don’t know this, but I actually dabbled in a captioning and CART session once long ago when I first started my steno career.  I was far from ready, but if I was able to survive that session many moons ago, I’m pretty sure that with the experience and skills that I’ve gained since then, I would/should be able to do some simple CART jobs (or at least start).

Being able to do captioning work would be amazing one day since I wouldn’t have to worry about constant transcript deadlines and slaving away at home making sure that everything is verbatim — although I do enjoy the scouring of mistakes against the audio file too to produce an immaculate transcript.  Captioning would be a great way of earning income and also give back to those who really need the accessibility service.  (Again, for the time being, I just know that I wouldn’t be comfortable doing the job until my listening and writing skills are better.  I wouldn’t want to let the person relying on the service down.  It is a big responsibility and one that I don’t take lightly.)

In any case, it was valuable to be able to hear first-hand from local captioners in Toronto about the work that they do.  One of the captioners also splits her time between captioning and doing court reporting, which is a good balance as well to hear about. 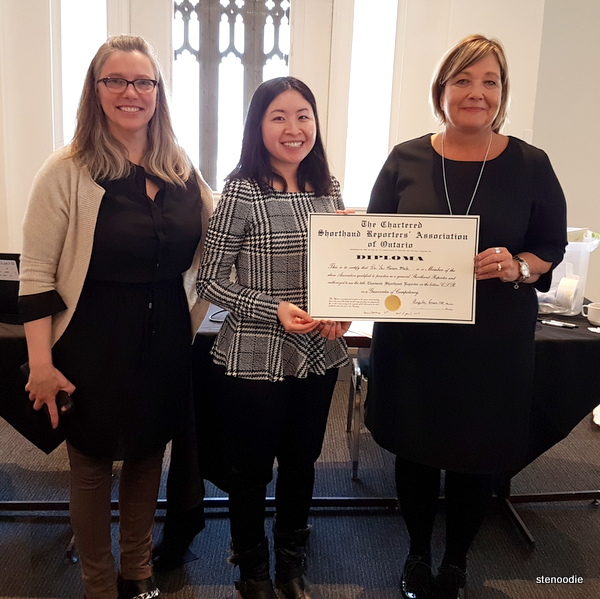 The newest 3 letters behind my name: Chartered Shorthand Reporter

After lunch, we had the presentation of the new CSR certificates of which I was one of the recipients.  Yay!  There were three new CSR members this year.  Congratulations to us all!  I hope that there will be many more new CSRs in the upcoming years.

(To obtain the CSR certificate, you have to pass all three legs of the skills test and the written test.  The skills tests are 95% minimum for the 160 wpm jury charge, 180 wpm Q and A, and 200 wpm Q and A respectively).

We also had an informal meeting/discussions throughout the day about the future of the CSRAO and steno in general.  All I want to say is that I really think more upcoming stenographers in Ontario and in Canada will spur the field once more, but we need them ASAP.  Anyone who is learning stenography in Ontario right now needs to continue and finish up so that we can have new blood in the field.  We are endorsing the NAIT School in Alberta, apparently one of the best steno schools in North America.  Hurry up, students, we need you!  And anyone who is serious about this career, please consider moving to Alberta to complete the program.  You’ll be busy working immediately after graduating as the jobs are out there and waiting for you. 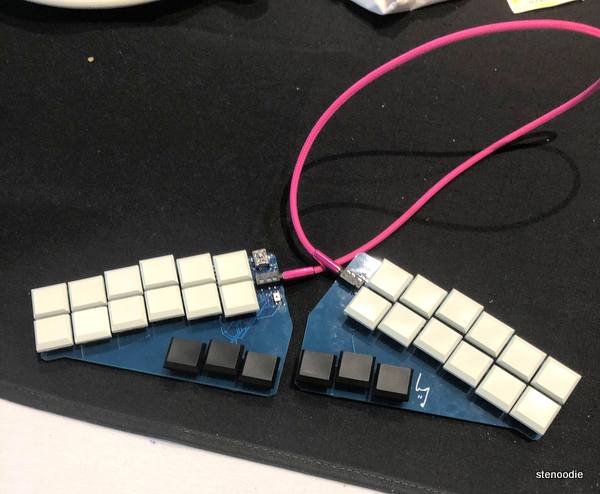 Lastly, Ted was able to show off the Georgi steno keyboard he uses for his coding work.  Ted is self-taught in steno thanks to the Open Steno Project and can steno up to 140 wpm on the keyboard (if I remember correctly).

Ted learned steno on his spare time and he now uses the steno keyboard successfully in his coding work, which cuts down on the amount of time it takes to “type” and increases productivity in the long-run.  Plus, it’s super fun too.  (You can learn more about the open steno project and Plover at this link.)

Steno is not just for professionals.  You can use it in your every day life by writing blog posts (how I’ve been blogging since day one), communicating with your friends through e-mail, social media, writing novels or professional articles, coding (like Ted), and much more.  Basically, steno can replace the traditional QWERTY keyboard with faster output, better ergonomics, and unlimited opportunities to use macros and shortcuts with one press of a key (or keys at the same time).

He also showcased the presentation he had given at StenoFest this year.  We love the use of emojis in steno and moving around a document using just steno strokes on the computer. 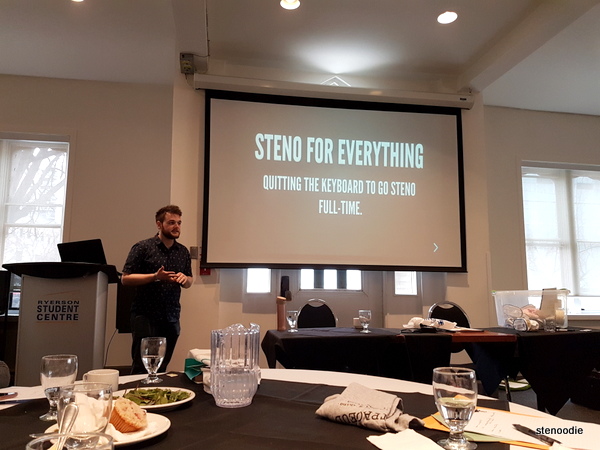 Hopefully, there will be another conference next year for me to write about.