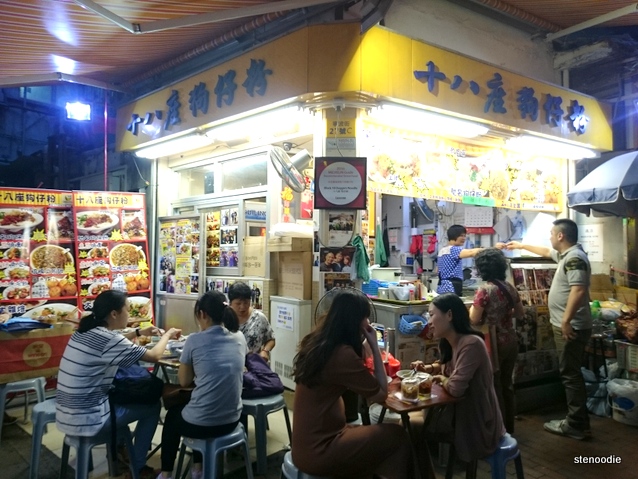 It was a food hopping adventure kind of day.  After we had the infamous wonton noodles at Mak Man Kee Noodle Shop, we were on the search for this inconspicuous noodle shop that was actually on the 2016 Michelin Guide of Recommended Street Food to eat in Hong Kong!  I have never had any Michelin guided or starred restaurant before so I was quite excited about this.

When we were walking up and down Ning Po Street in Jordan, I was a bit perplexed because I couldn’t find the shop at all at first.  However, after looking closely at the numbers and realizing that Block 18 Doggie’s Noodle was actually a dai pai dong (and actually having walked past it completely a few times), I was quite amused.  A dai pai dong is a street food kind of “restaurant” or eatery where there are only a couple of tables, there isn’t much of an “established restaurant” at all, and it may or may not be filthy since you are actually eating on the street.  You will be sharing tables for other customers for sure and the eating time is quick and efficient.  There is also no time for chitchat or pleasantries from the staff either.  It’s a truly authentic experience!  There were only a few tables at Block 18 Doggie’s Noodle and we sat facing the street. 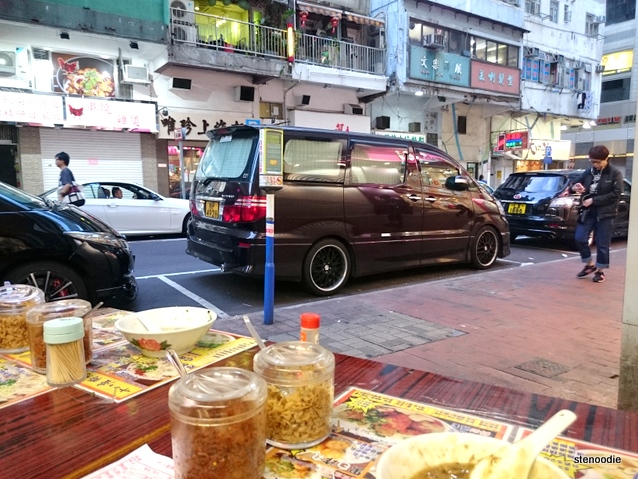 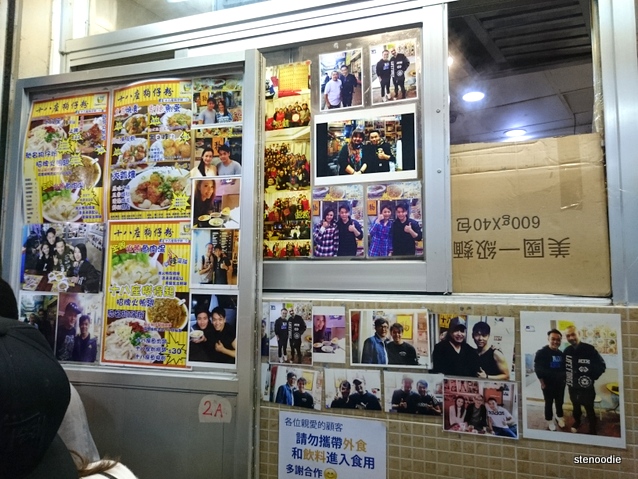 Famous people who had visited this place

Right away, we ordered the bowl of infamous “doggie’s noodle” (狗仔粉) in addition to a bowl of signature shredded duck stew with silver noodles (招牌火鴨翅).  In addition to noodles, they also sold various street eats like fish balls, sausages, and siu mai. 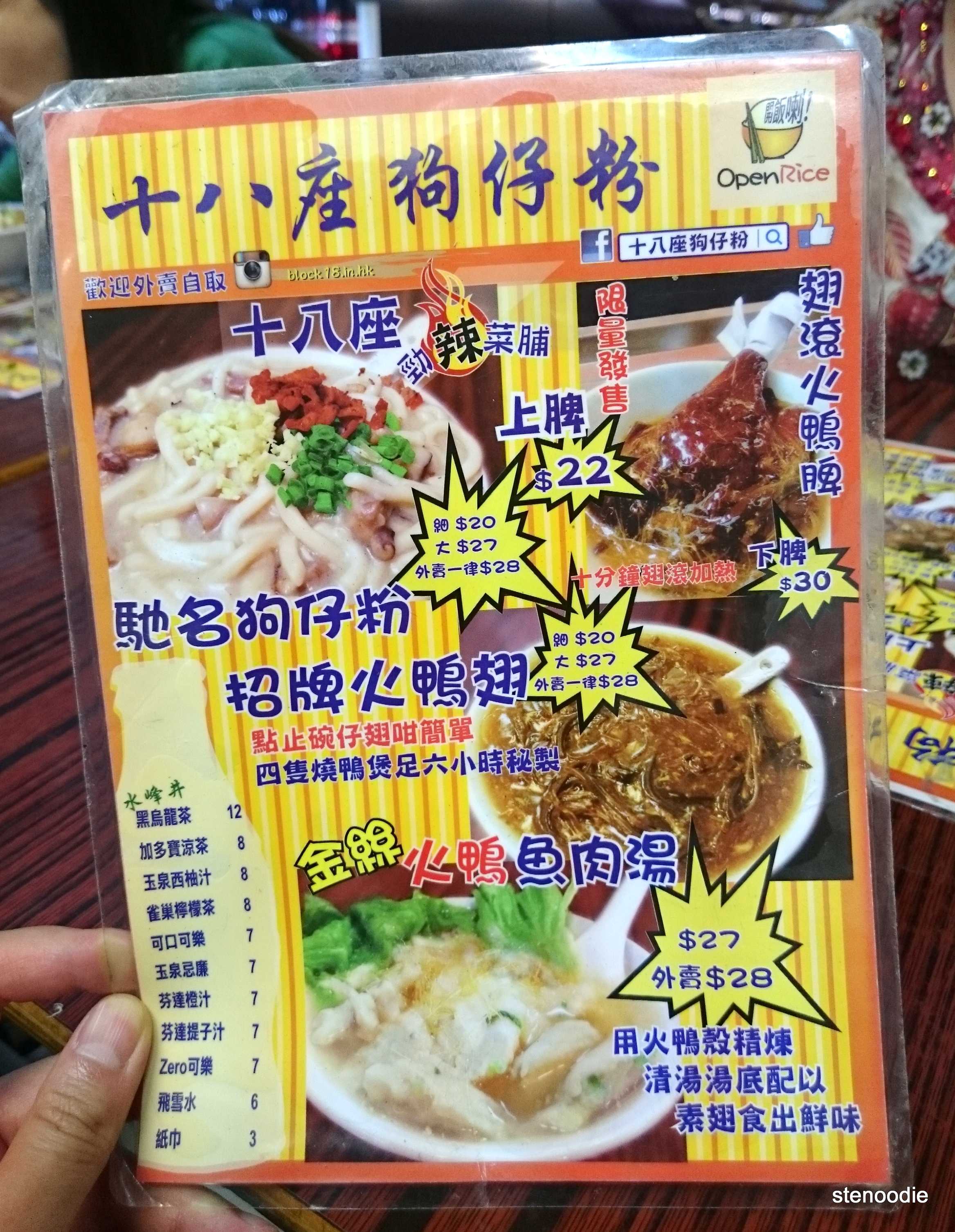 Menu of their famous eats 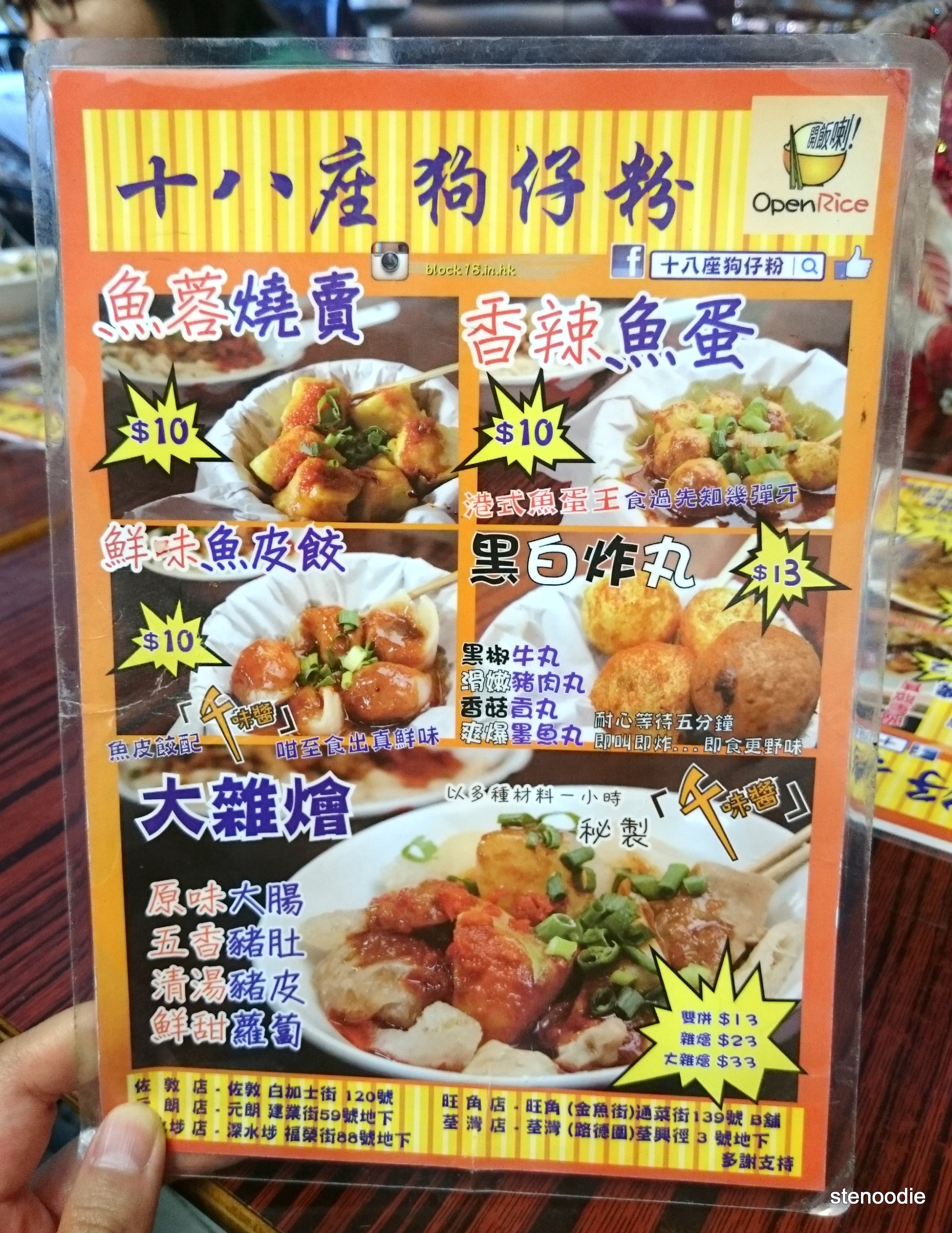 The Doggie’s Noodle was made with thick-cut noodles that looked like lumpy macaroni.  There were bits of preserved vegetables and scallions in a dense soup base.  It was actually really tasty since each noodle was so soft yet flavourful.  My mom was really surprised too at how delicious it tasted considering that the environment of this eatery was so dumpy — she underestimated it totally.  No wonder this was rated as a Michelin Guide food!  It was really that good! 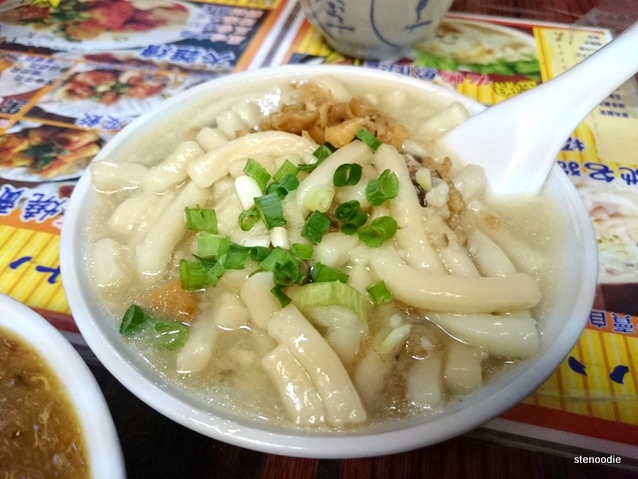 The signature shredded duck stew with silver noodles was also quite good!  There were a lot of silver noodles in it resembling fake “shark fin” as the name implies and the consistency of the stew was perfect. 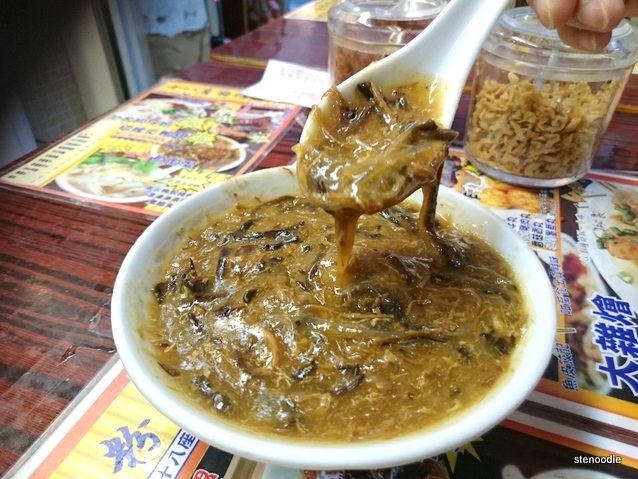 Before we left, we ordered one more noodle dish which was the “Vermicelli with smoked duck and fish meat soup” (金絲火鴨魚肉湯).  This dish was more tame compared to the other more well-known dishes but I really enjoyed the fish meat in this dish.  The silver noodles were sharp and spiny too. 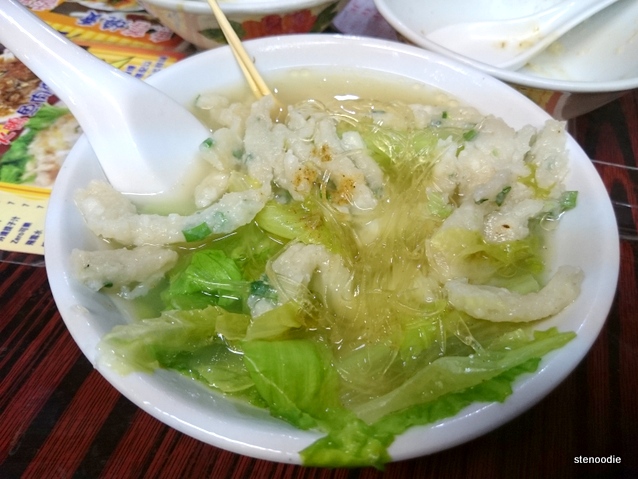 We left this place feeling full and satisfied.  During our stay, there were a lot of solo diners too who looked like they arrived from school or work just to enjoy a simple bowl of noodles or snack on their assorted snacks.  I was really here to try their Doggie’s Noodle and didn’t want to fill up on snacks but their assorted meat and fish balls looked really good too!

Yay!  I was so happy to be able to try this 2016 Michelin Guide Recommended Street Food spot! ^_^ 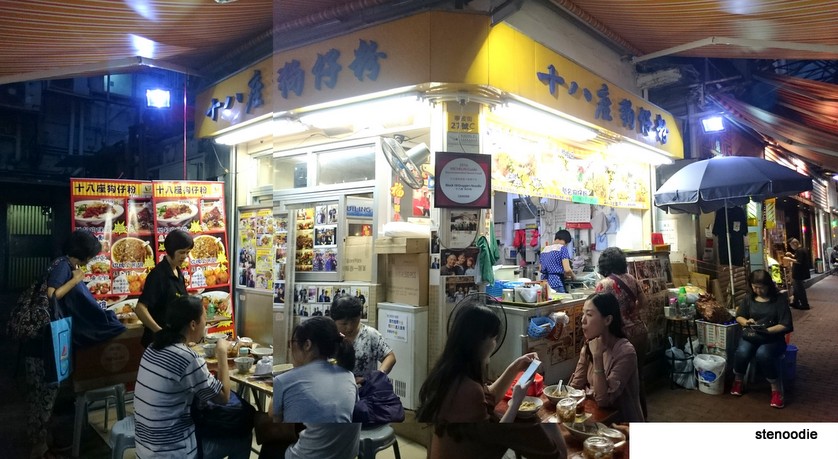 As we left, there were so many more people here 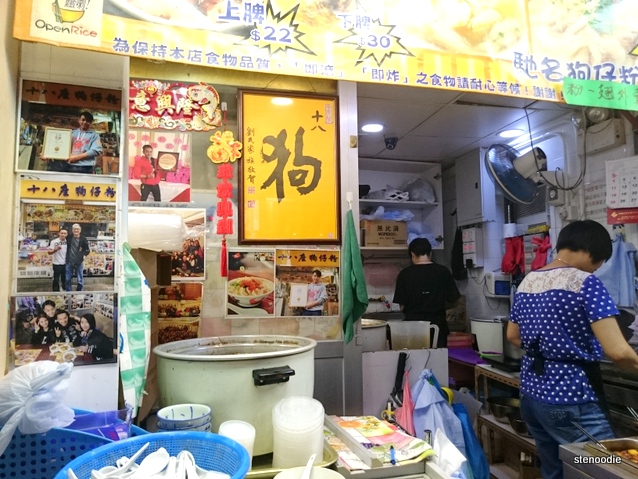 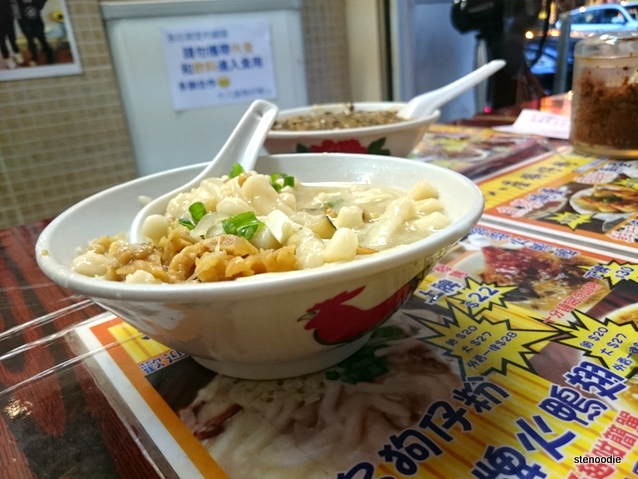 I loved eating this “on the streets” 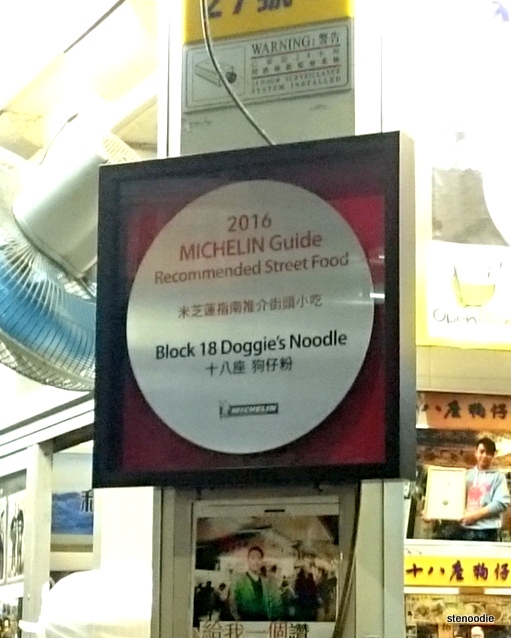