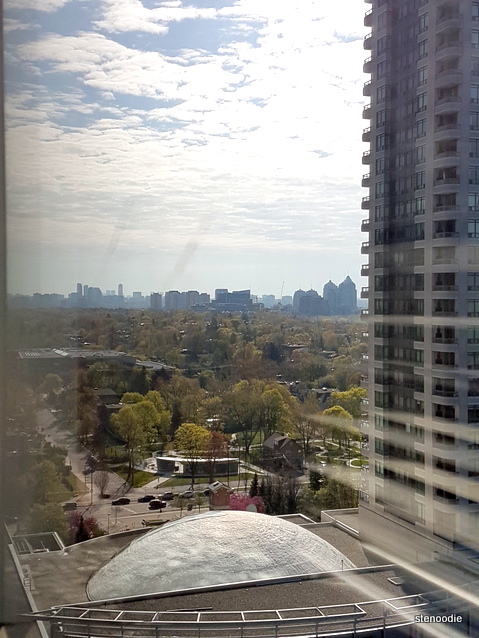 View from the 14th floor of the Financial Services Tribunal

Lately, I’ve taken the approach of preferring to work on my transcripts rather than blogging whereas in the past it’s always been blog posts before anything else to the point of staying up late until midnight or beyond to publish a post once per day.  As some of you might have noticed — and as I know it myself — I’ve been lacking in the department of daily posts lately.  It’s not that I’m uninspired — I already have a growing list of new backlogged posts already waiting for me to write and publish.  I guess it’s a lack of motivation plus more priority towards working on my transcripts (there’s a joy in it and as well as actual monetary value) and sleeping earlier at night.

In any case, I do want to bring back the daily posts and I’m starting it off again (although I will be stuffing these blogs in between the blank calendar days of no blog posts.. potentially) with a blog post about some CR firsts that I didn’t get to write about last week when I was still feeling unmotivated.

Last Friday, I went to the FSCO for the first time for a hearing!  FSCO stands for the Financial Services Commission of Ontario.  It was on the 14th floor of the Financial Services Tribunal at 5160 Yonge Street near North York Centre.  This was the closest location on the subway line that I’ve had to commute to — first uptown location for reporting.

I was really excited about going into a new location to report.  When I got there 45 minutes early, I was really excited to walk through the hallways to room #20.  I bypassed lots of other hearing rooms and boardrooms which had these incredible views of Toronto in the early morning 9 a.m. light.  I of course took a photo of the view from room #20 as well. 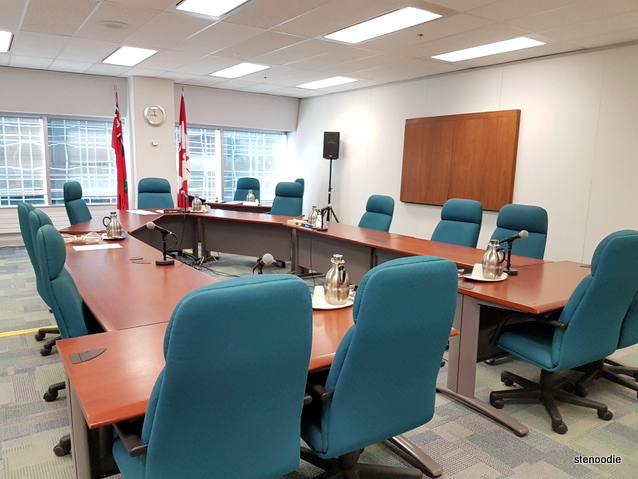 Boardroom inside the FSCO 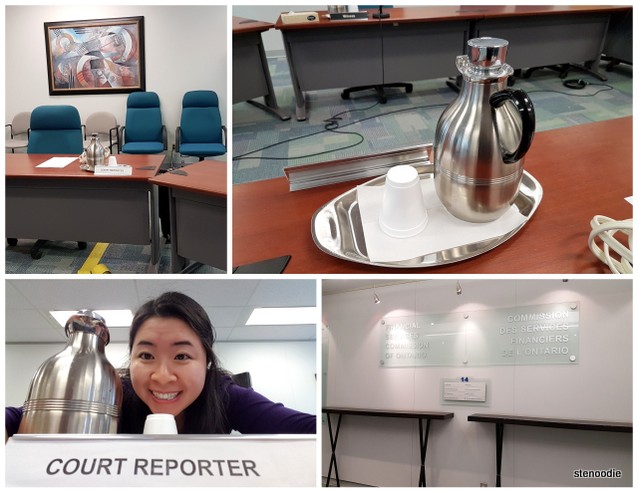 This room was really well put together for a hearing.  There were individual water jugs on the table, a coat rack, an extension cord for me.  There were even designated spots for each speaker with a sign and everything!  When I walked in, I wasn’t sure where I would be sitting though.  I walked towards the registrar’s table and luckily looked back and saw that there was actually a sign for “court reporter” on the table!  Yay!  I knew that was where I was going to sit. 😀

Unfortunately, this first hearing at the FSCO was a French hearing so I didn’t really get to hear what the case was about.  I was merely there to make an audio recording so that if the parties ordered it, I would have the recording available.  Fortunately, the full-day hearing actually ended up being shortened as the witness decided not to show up.  Thus, the parties did some submissions and we were off the record by an hour’s time.  Yay!  That meant I didn’t have to stay in the room as scheduled trying to *look* busy on my laptop.  (The venue didn’t have an open access Internet… thus I was really severely limited in what I could do while I was there).  Good thing it ended up being a shortened day! 🙂

Thus, I had a very good first impression and experience reporting at the FSCO… if you can really call it “reporting” if it was in French… anyway, I digress. 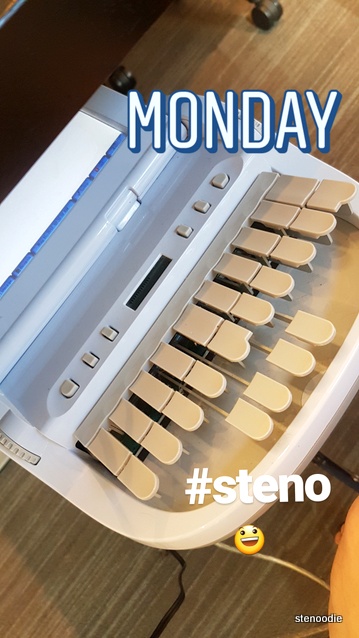 Another “first” reporting moment I had recently was earlier this week on Monday when I got to take the depositions of a divorce proceeding.  Ohh!  This was my very first family law hearing that went through (I sat on a family law case last year in the summer but unfortunately the circumstances didn’t allow the case to fully proceed).  In particular, this was my first divorce proceeding that I reported on.  The husband testified in the morning while the wife testified in the afternoon.  It was incredibly fascinating and so interesting to be there to listen to.  Both characters were interesting to say the least.  And so because of that, even though both segments ended up to be 2.5 hours each without not much of a break, I was riveted by the testimony and didn’t feel tired or antsy at all.  I hope I get to report on family law and divorce cases more in the future. 🙂

This blog post was written roughly — you can really hear it in the beginning — and that’s because I haven’t written in a while.  Hopefully I can get more of my backlog caught up again. 😀

I'm a stenographer, foodie, avid traveller, and new mom who loves to share her experiences with the world.
View all posts by stenoodie →
This entry was posted in Steno and tagged blogger, blogging, Court reporter, court reporting, court reporting blog, stenograph. Bookmark the permalink.