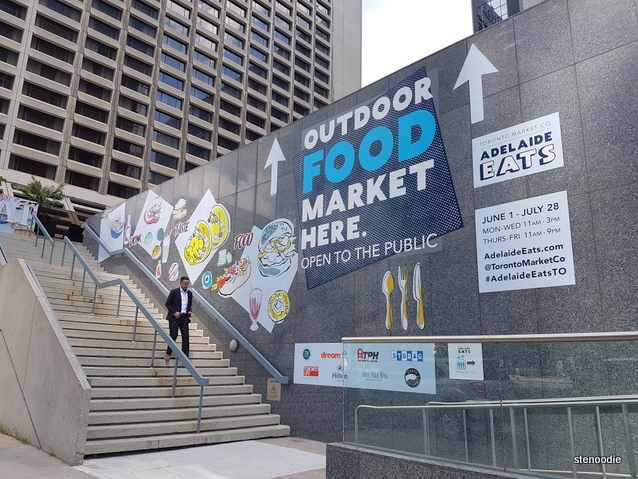 Adelaide Eats is back for another year!  (It used to be called Front Street Foods.)  It’s located at the second floor terrace of Adelaide Place, overlooking both Adelaide St. West and University Ave.  It’s an outdoor food market and there are several vendors from local restaurants or catering companies that participate to sell their featured items and food.

It’s on from June 1 to July 28, 2017 with some vendors participating for the entire period or not.  It’s nice that they have rotating vendors so that fellow lunch-goers in this part of the city get something new to try. 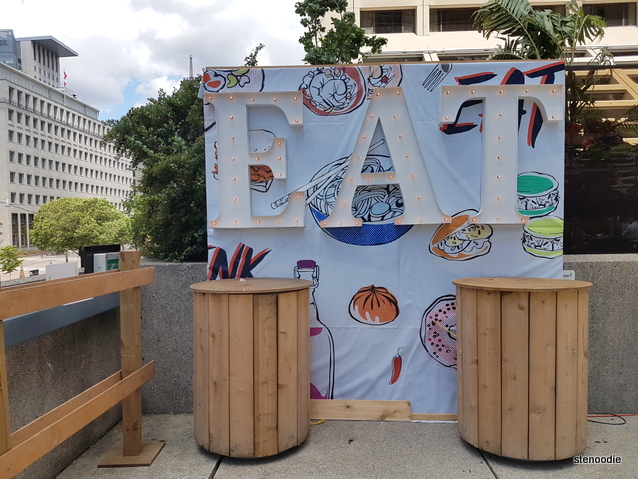 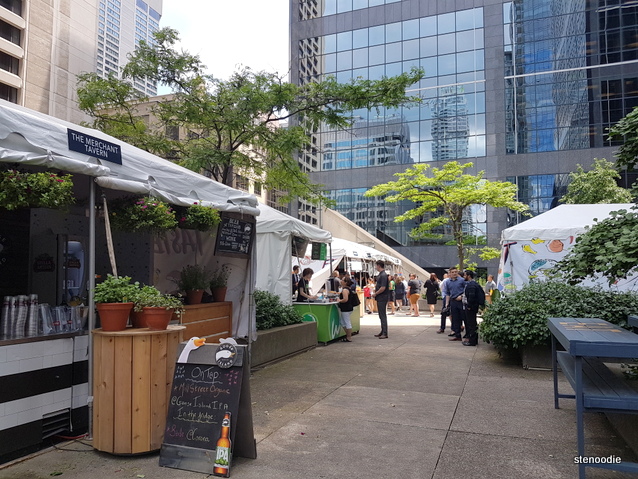 Outdoor food market in the heart of the city 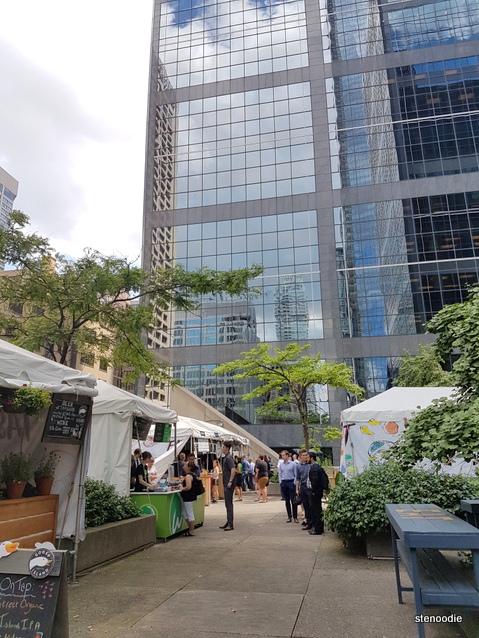 Trees within the city centre

On a Monday, my boo and I met up for lunch and checked out Adelaide Eats.  It’s not very often that I get to dine out when working downtown since I usually prefer to pack a lunch or work over my short lunches.  It was perfect though that I had a long break between two reporting jobs for me to step out to enjoy this outdoor market! 😀

It was a nice spring day and there were a lot of people here grabbing lunch on a Monday.  It’s a prime area for anyone working or living in the vicinity to try something new for lunch. 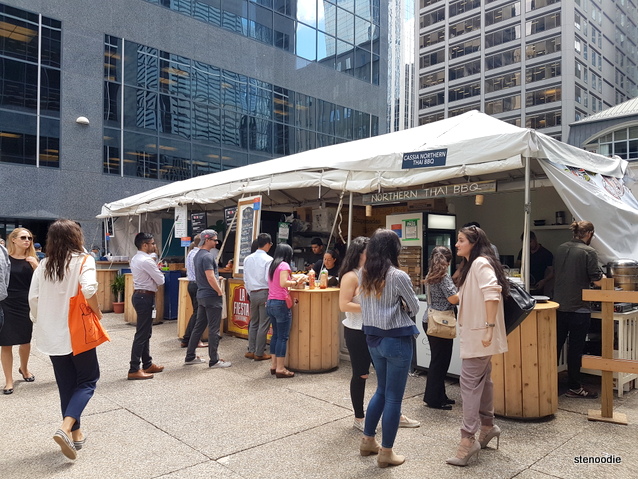 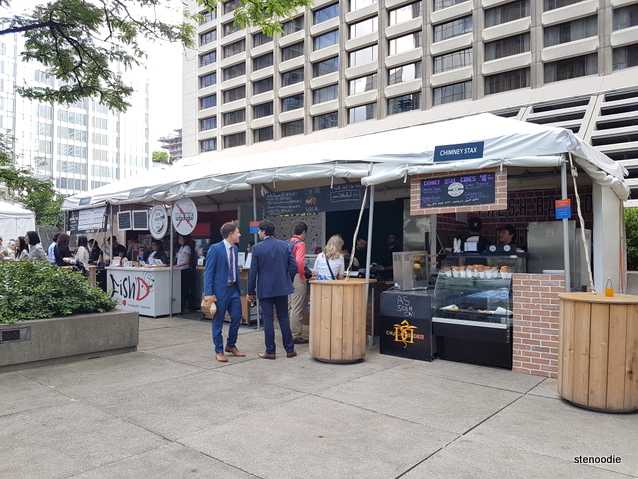 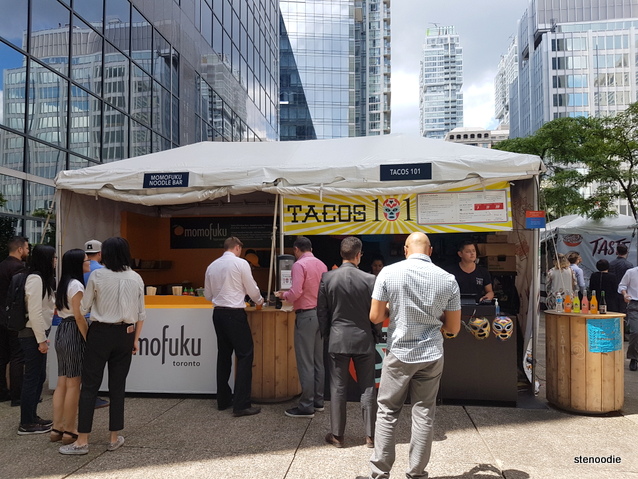 I looked around the vendors on this visit before ordering and decided that I wanted tacos.  I got two tacos from Tacos 101. 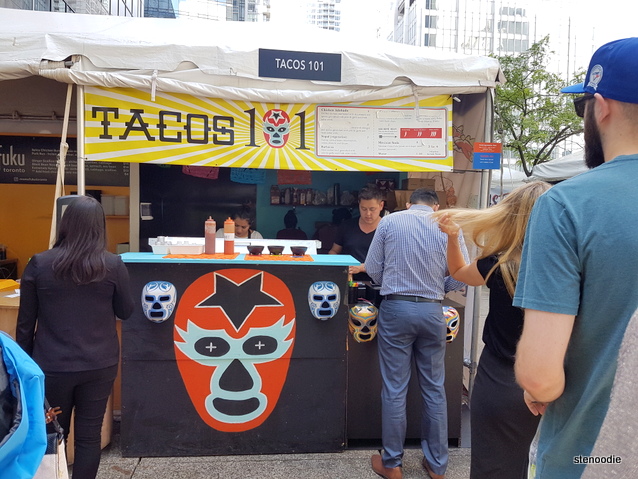 I overheard the staff inform a customer that their fryer was broken and thus they weren’t able to include chips with the taco orders. 😦  I ordered the Chicken Adobado Taco and the Barbacoa Taco.  (Their Carnitas Taco was unavailable just a few minutes after I arrived — they posted white tape over it to show its unavailability.  Another item on their menu was blocked out too.) 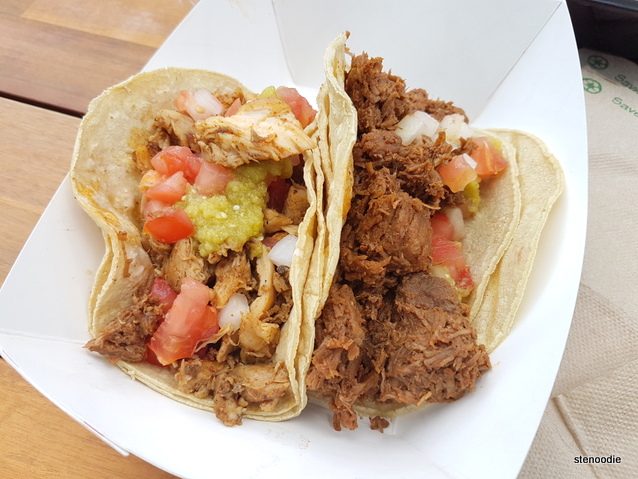 The $5 tacos were quite substantial in size and seemed to be wrapped with double layer corn tortillas.  Appearance-wise, the tacos looked a little dry.  Fortunately, the Chicken Adobado wasn’t as dry as I expected and actually tasted quite good.  Unfortunately, the slow cooked beef taco was indeed a little dry.  Its seasoning was quite strong in flavour but it required more chewing before swallowing due to its lack of moisture. 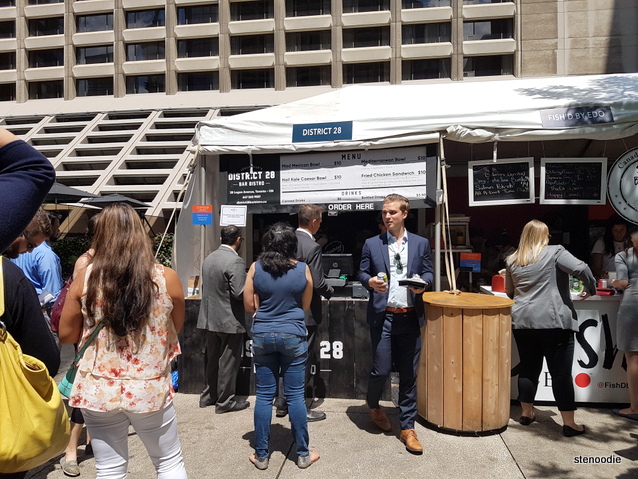 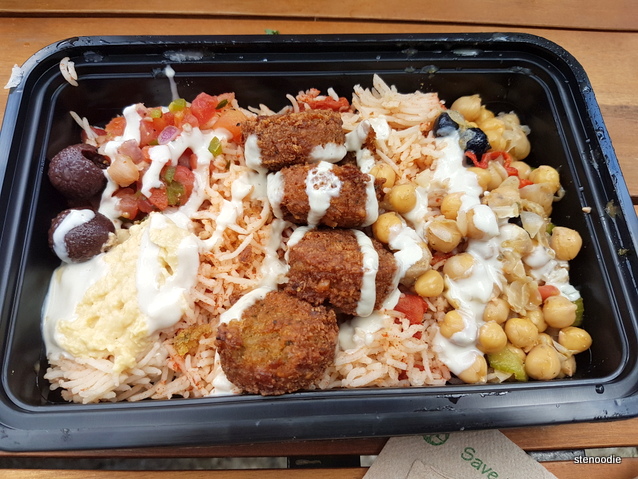 Ken ordered the Mediterranean Bowl from District 28 Bar Bistro.  It had Israeli Couscous, falafel, Moroccan chickpea salad, olives, hummus, and tahini.  It came in a pre-packed plastic box and was ready right away upon payment.  I think they could have filled up the rectangular box a little more but otherwise was fairly average in taste (and a little dry) — the hummus was good though.

I found there was nothing too special about the vendors here at Adelaide Eats; nothing really in particular that I would have wanted to try if I wasn’t already in the neighbourhood; in other words, nothing I would walk here specifically for (unlike last year’s Raclette Cheese).  However, I wouldn’t mind returning to try the buns from Momofuku or fish dishes from Little Fin.

And if or when I do return to try more vendors from this year’s Adelaide Eats, I might append it to this blog entry. 🙂