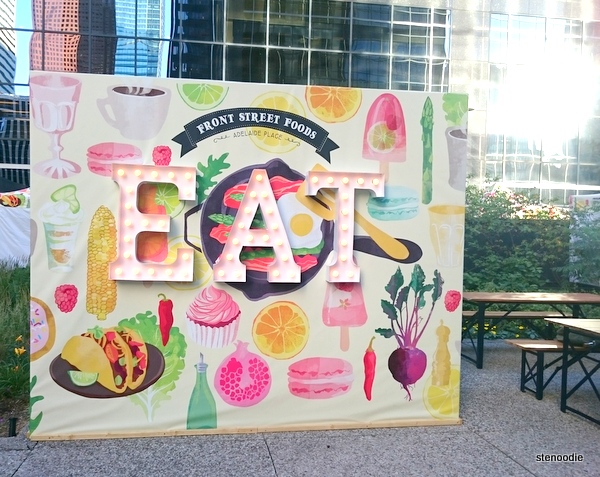 Right after our visit to Union Summer food market at Front Street, Grace and I ventured to the “actual” Front Streets Foods market which was relocated to Adelaide Place this year.  I personally don’t know why they relocated from the busy and well-populated area of Front Street to be at Adelaide Place and overlooking both Adelaide St. West and University Ave.  Perhaps they wanted to service more of the Financial District peeps this year?  Nonetheless, this was my first time visiting the Front Street Foods market and I was excited to see what it would be like!

The real reason I actually came all the way from Markham to downtown to visit the Front Street Foods market was because I was alerted from instagram that the Raclette Cheese vendor would be selling their Swiss Raclette there and I was dying to try it out!  I had first noticed this cheesy dish on Facebook when friends were circulating the video around.  I am a HUGE fan of cheese and especially melted cheese.  When I saw how delicious this dish looked with the cheese being heated over a pan and then a knife scraping its freshly melted cheese on to a hot plate of food, I was absolutely in awe and absolutely wanted to try it.  The video in which this was filmed though was from a restaurant in New York City.

Can you tell why I was so impressed and why I wanted to try it so badly? 🙂

Fast forward to a couple of weeks ago when I found out that @Raclette_Suisse would be selling at the Front Street Foods market and Grace and I immediately set up a date for us to go try it. 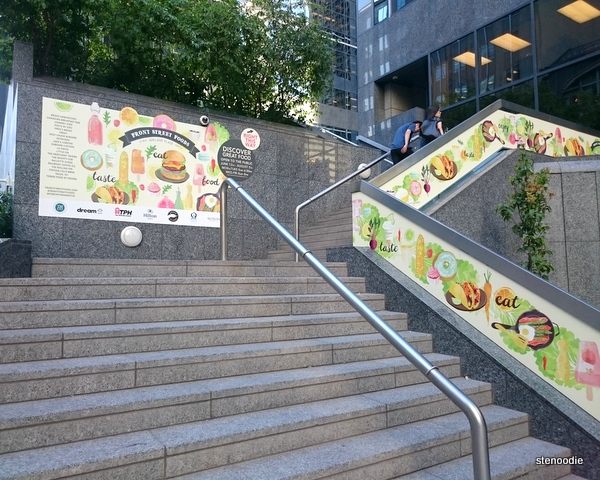 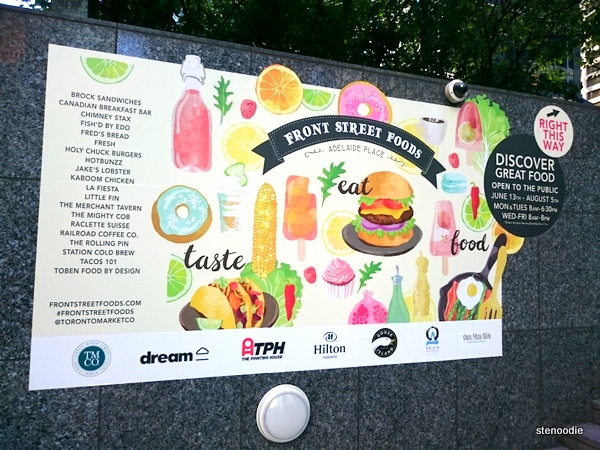 What a gorgeous design of the food market!

After browsing the vendors that were there, I went straight to the Raclette Suisse vendor and the dish.  My camera was ready to film the entire process as it was something that just photos wouldn’t be able to capture the magnificence of. 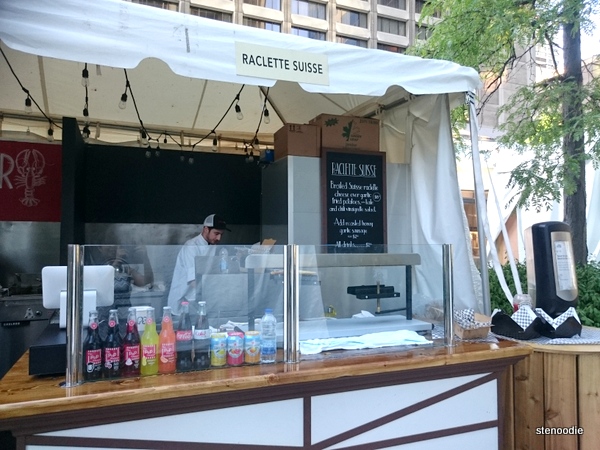 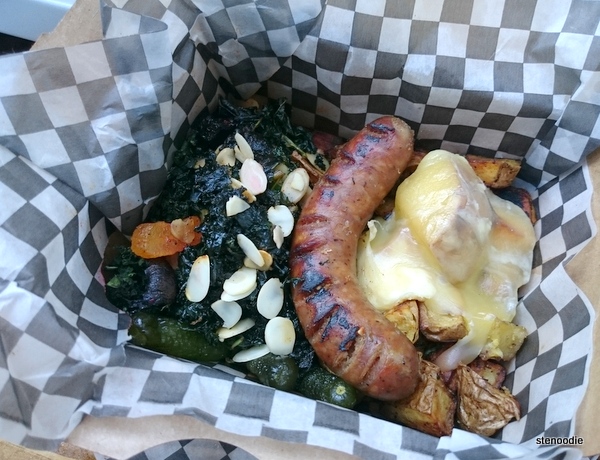 A sample box on display

There were two staff members working at Raclette Cheese at the time of our visit, a male and a female.  Both of them were very friendly and happy to see me show interest in an order.  It was nearing the end of the food market’s closing (they close at 8 p.m.; we were there at 7:40 p.m.) and it looked like they were ready to close. 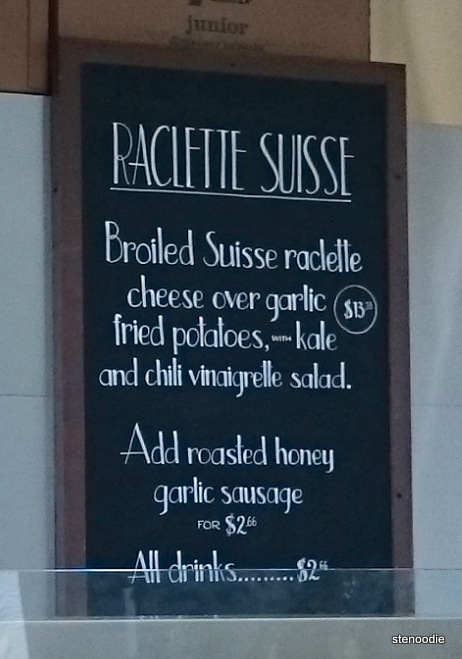 The only thing on their menu: Raclette Suisse for $13.28

After I placed my order — I couldn’t believe that the dish was $15 after tax by the way.. — the male staff readied up the Raclette Cheese for my order.  (Raclette is a semi-hard cow’s milk cheese that is usually fashioned into a wheel.  It is most commonly used for melting.  It is also a Swiss dish based on heating the cheese and scraping off (racler) the melted part. ~ from Wikipeida)

Because I had seen videos about the Raclette Cheese as a big wheel, I asked the guy about it.  He said that because they were at the end of the day, the cheese was a big wheel size before, but now it was melted to this size.  The female overheard my question and informed me that “that was the best part of the cheese”.  I hesitantly took her word for it.

The way that they melted the cheese was nothing like what I had seen in the videos.  What they did was use a light underneath the black area that you see in the picture and that’s how the cheese was heated up…. 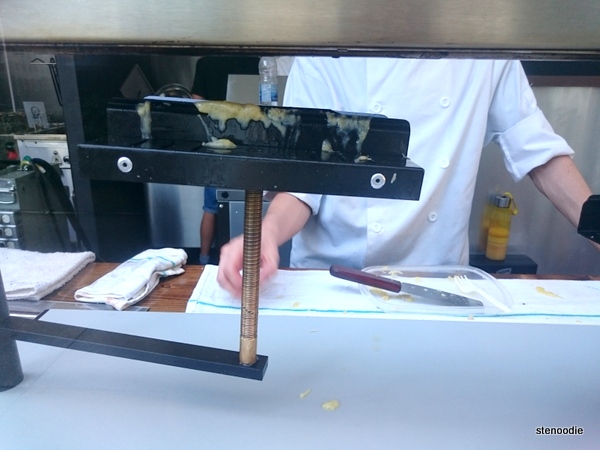 The device they use to heat up the Raclette cheese 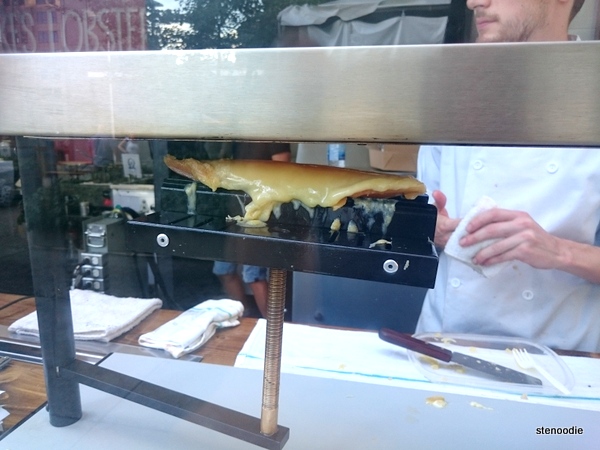 Already, this was a disappointment and underwhelming when compared to how the original way to heat up the cheese is with a pan

It was so bad that there wasn’t enough melted cheese and the guy had to replace the piece of cheese onto the heater again to melt a second time. 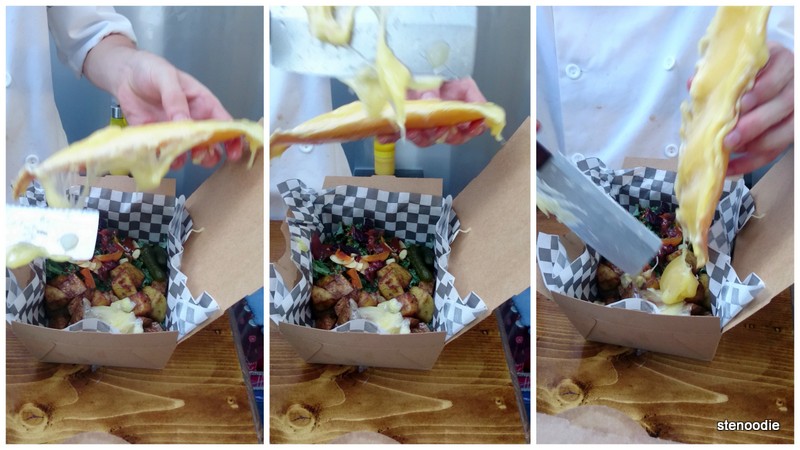 How is this an authentic experience of a Raclette “cheese wheel”?!

Here is the second video:

Guys, I could not believe it.  I had come all the way downtown, I was so excited to try Swiss Raclette Cheese for the first time, I had to pay $15 for this, and there were barely any cheese to be scraped.  What’s the point of me paying money for this “Raclette cheese experience”?  Half of the experience of getting Raclette Cheese was to watch the actual scraping part in its full glory.  This was incredibly underwhelming, disappointing, and unfair. 😦

Unfortunately, I’m not one to voice my honest opinions about something right away when they happen.  Especially when I was told by the staff that the end of the cheese was the “best part” of the cheese.  How could I complain at the time? 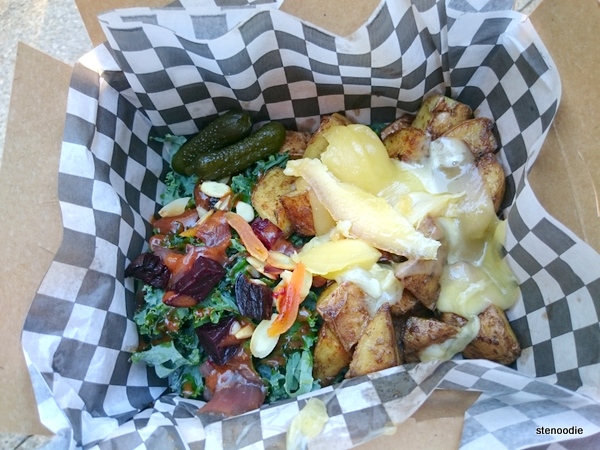 Broiled Suisse rachelle cheese over garlic fried potatoes with kale and chili vinaigrette salad. $13.28 = an even $15 after tax

I took my box of the Raclette Cheese which was melted over roasted potatoes with a kale salad with Grace to the picnic tables and sat down to eat.

The Raclette Cheese was delicious by itself.  It smelled strongly of cow’s milk cheese and tasted really good.  However, for the $15 that I paid, I don’t think I got my money’s worth at all.  If I had arrived at a time when the Raclette Cheese was a full wheel, my experience and amount of cheese on my dish would have been very different — I would have received more.  I can’t stop all lamenting over this terrible foodie tragedy.  The only way I know how to console myself is to write this blog post and let everyone know.

I am still a huge supporter of Raclette Cheese and this dish.  I know it is delicious and that other customers have received amazing dishes of fully melted cheese — look at their instagram page where others have received the full treatment.

I just warn that if you go to Raclette Cheese and all they have available is a flimsy “wedge” of cheese to melt for you that day, please say no and walk away.  Or demand that a full wheel be supplied.  I was terribly disappointed that day and I never want anyone else to experience what I experienced.  It wasn’t right.  I felt I got jipped and ripped off.

On a happier note, these are the photos of the rest of some of the food vendors that we saw.  There were a great selection of food and drink vendors! 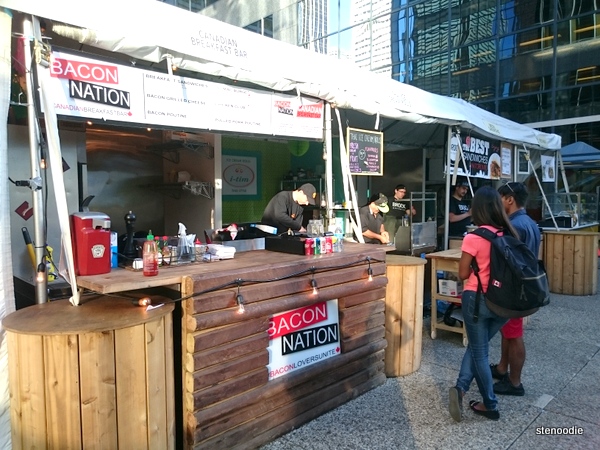 Thai ice cream rolls are everywhere now!  There was a vendor here by the name of just “Thai Ice Cream Rolls”. 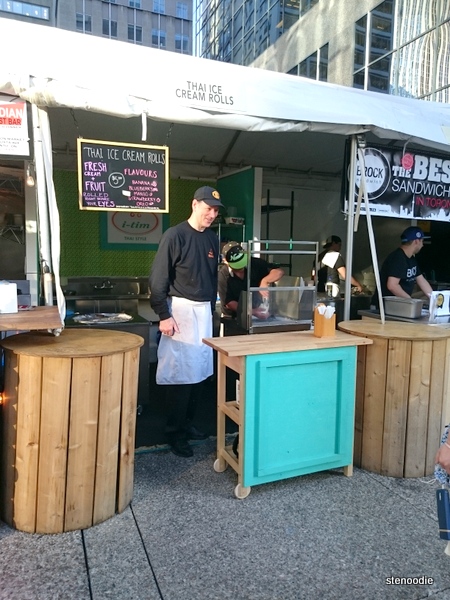 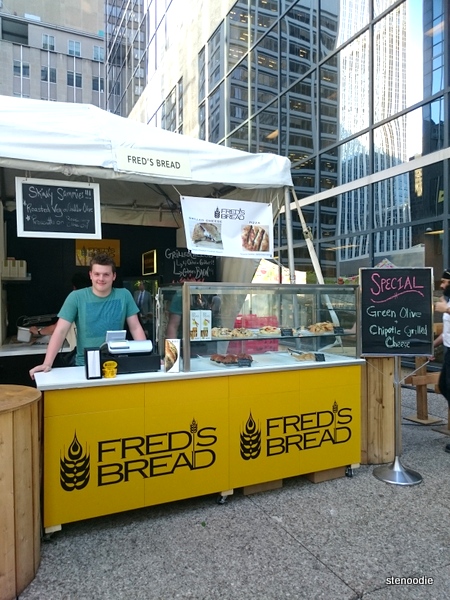 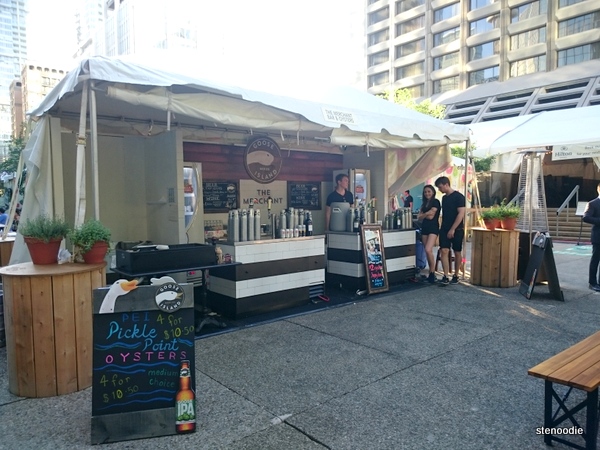 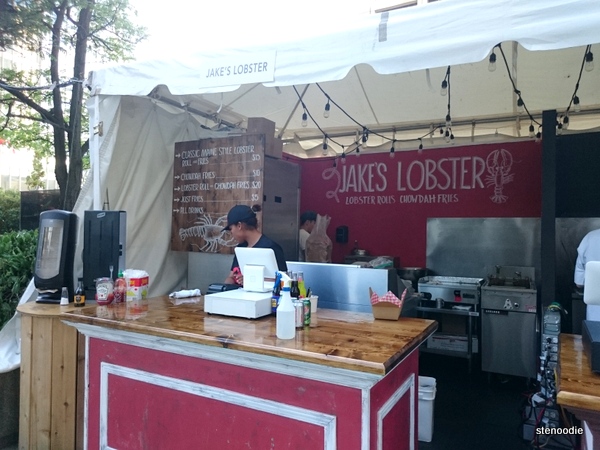 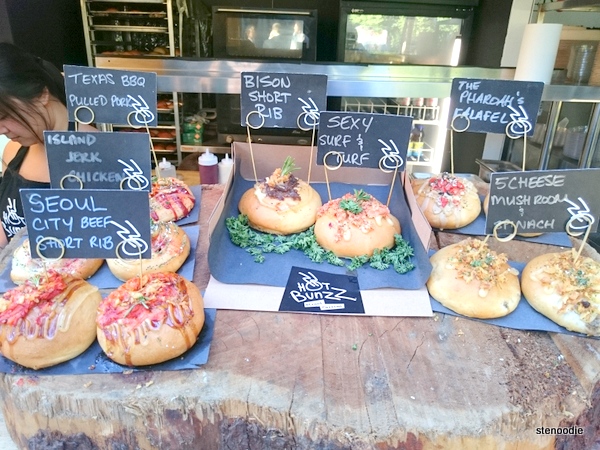 The hot cross buns from Hot Bunzz looked so good and the description on their menu made it sound even better.  However, I don’t think there was enough toppings on each bun — looks like there’s more bun than toppings.  I would still love to try it one day though.  It’d be great to share with a friend or two to try out each topping.

There was also another chimney cone dessert place here!  This one was the Chimney Stax company.  The one in the cup looks so cute! 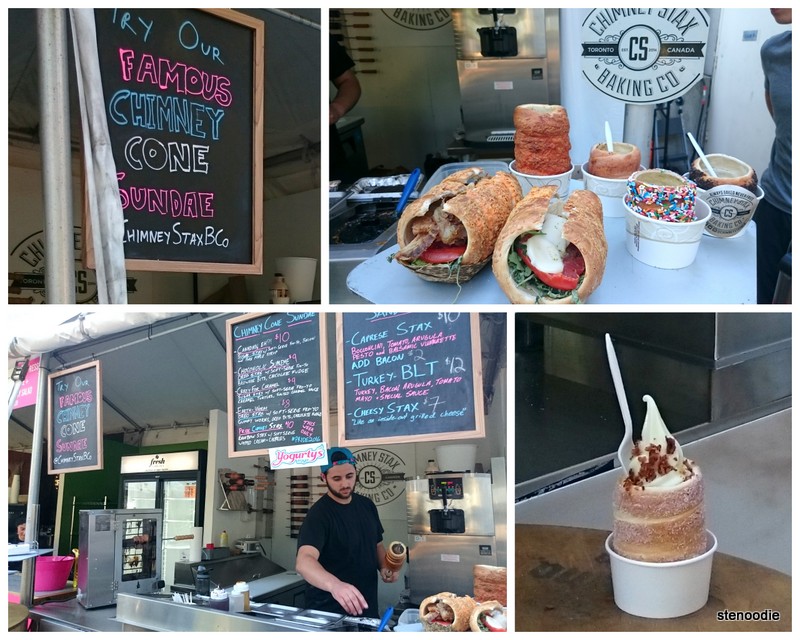 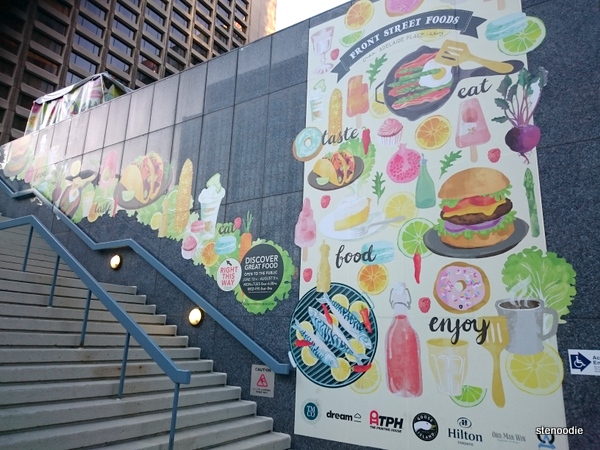 I think Front Street Foods at Adelaide Place has huge potential for lots of customers and happy foodies.  However, since it is tucked away at Adelaide Place, I don’t think many people know about it and essentially won’t happen to walk into it by chance (unlike its former location at the prominent Front Street in front of Union Station).  Perhaps this is their goal to keep it quiet this year.  If so, then they definitely achieved their goals.  They are also only open from Monday to Friday from lunch time until the evening which gives no room for people who want to visit during the weekend for a summer food market.  I think if I worked in the financial district, I’d be so happy to come here every day for lunch or dinner to try something new from each vendor! 🙂 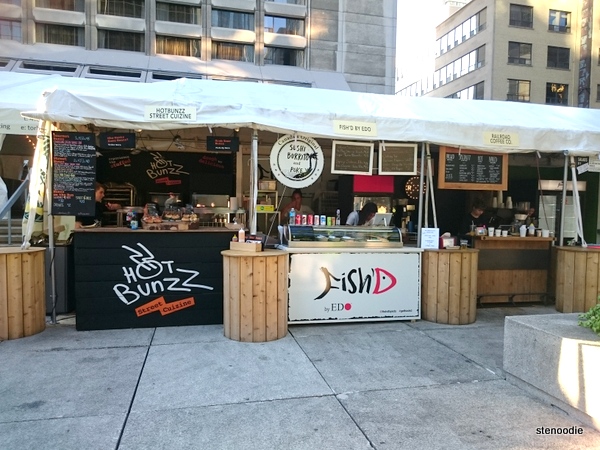 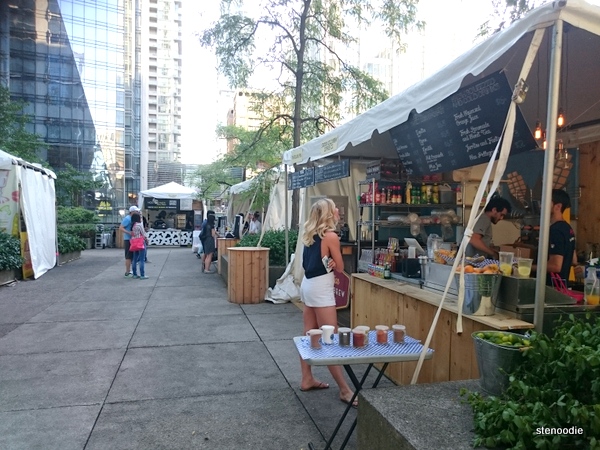 Essentially only open during the workweek hours