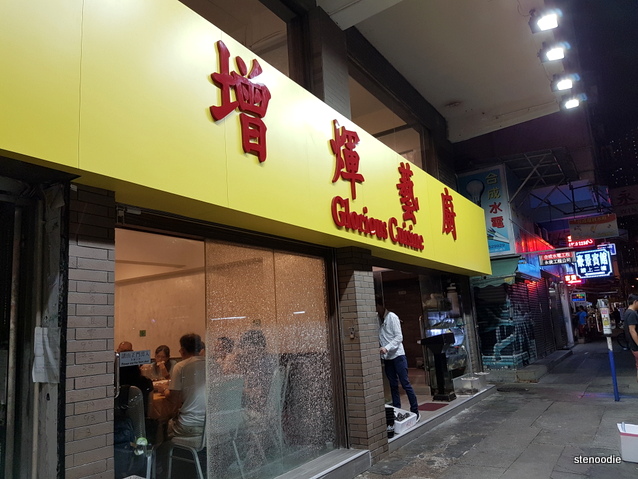 For dinner, we went to Glorious Cuisine (增煇大排檔 & 增煇藝廚) with our travel buddies.  I originally thought this was a legitimate dai pai dong restaurant since their Chinese name had the words “大排檔” in it.  Alas, I was disappointed when we arrived and I found out that it was actually more of a typical Chinese restaurant.  I believe they used to operate as a traditional dai pai dong but has since adapted with the modern times to become a sit-down restaurant.

My mom had made reservations for the seven of us but when we got there at 5:30 p.m., the host didn’t have any trace of our reservation at all..  How frustrating.  Luckily since we were there early, the restaurant was empty and we got a table. 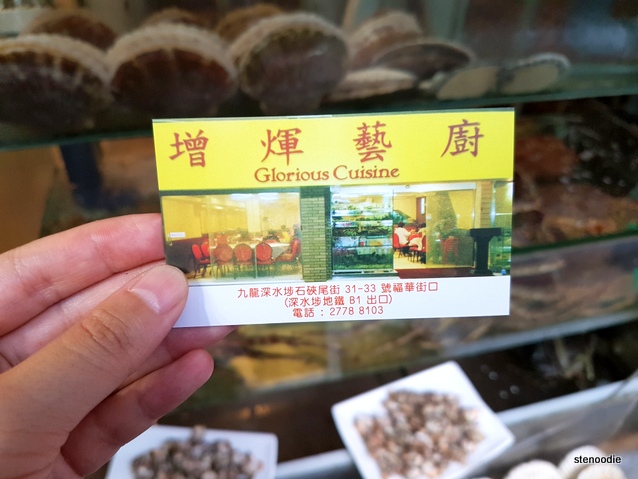 The table had tablecloths on it and nice study backended chairs (totally not dai pai dong style at all). 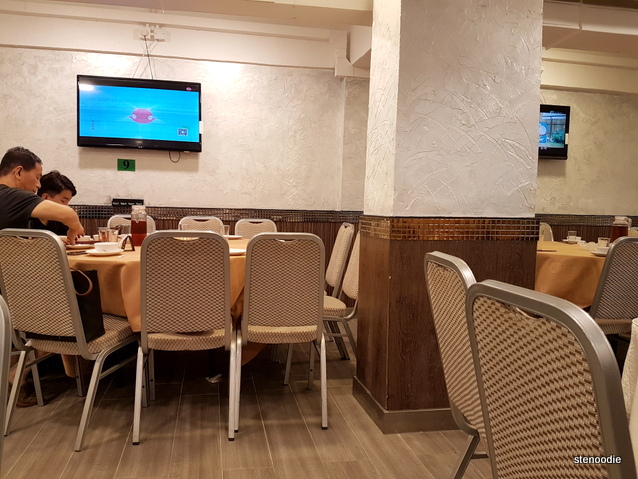 A glimpse of their interior

We ordered a few of the dishes on the menu including a signature crispy fried pork.  It actually wasn’t a lot of food considering we had seven people but it was a decent taste of what the restaurant had to offer. 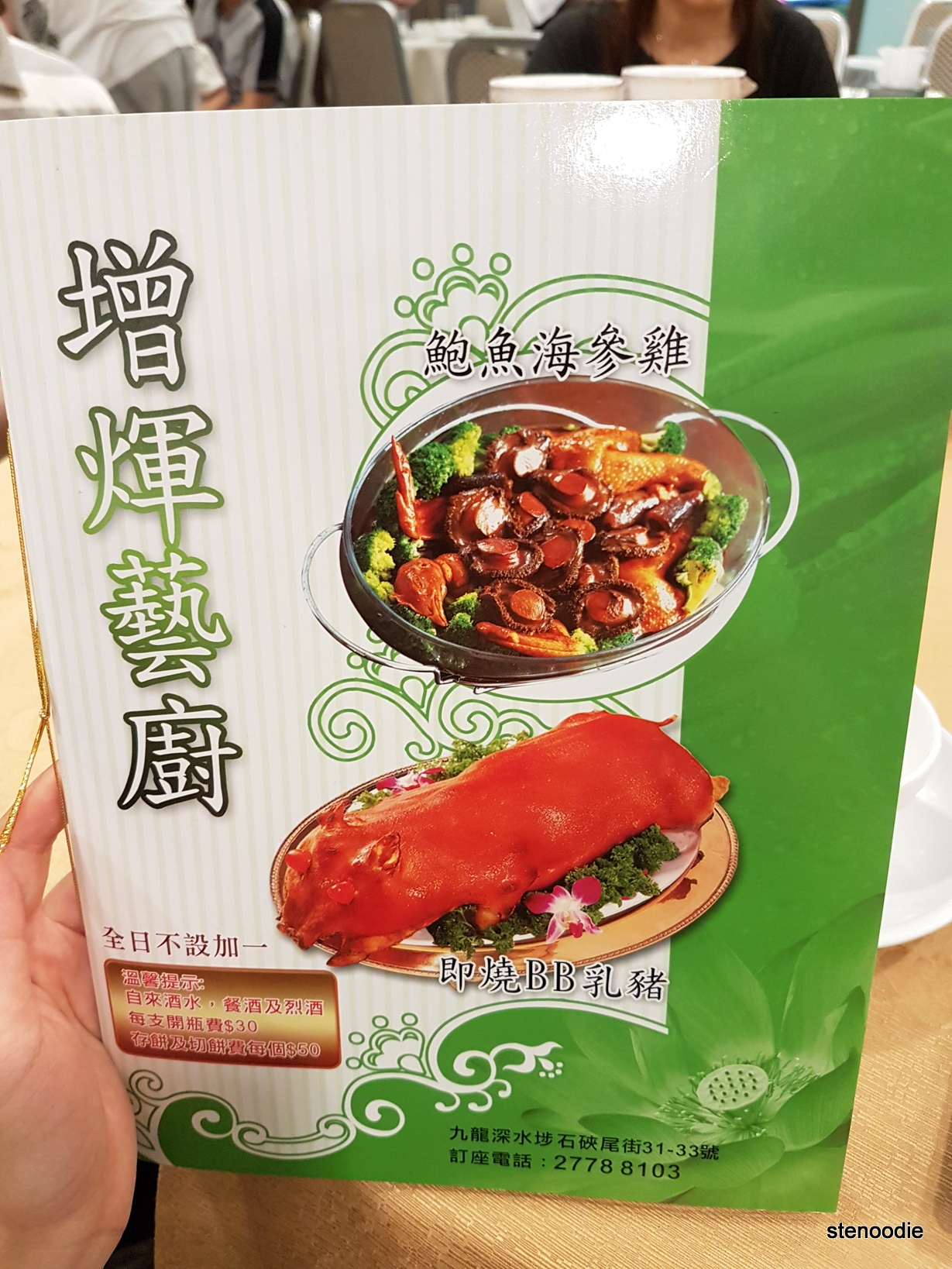 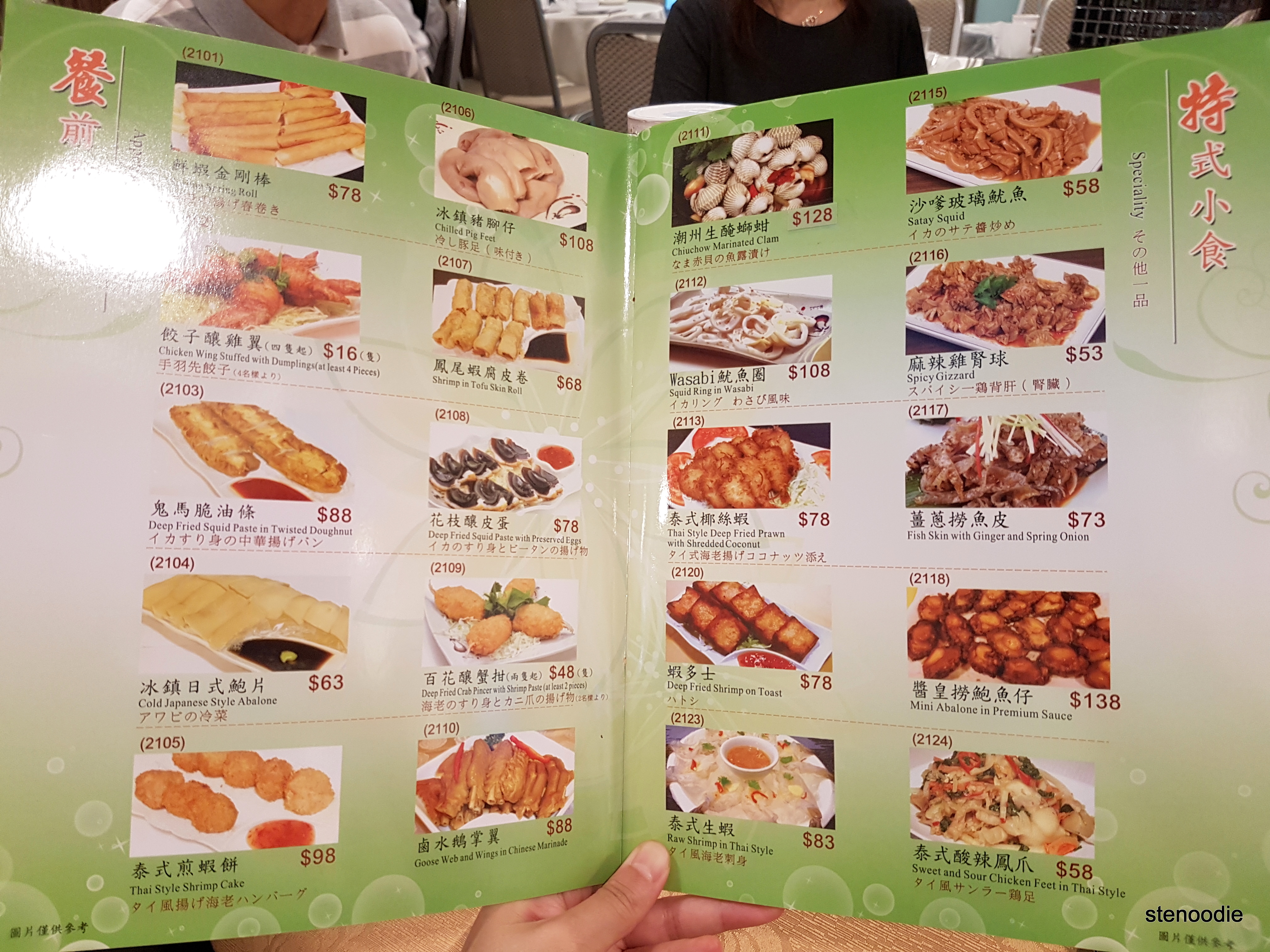 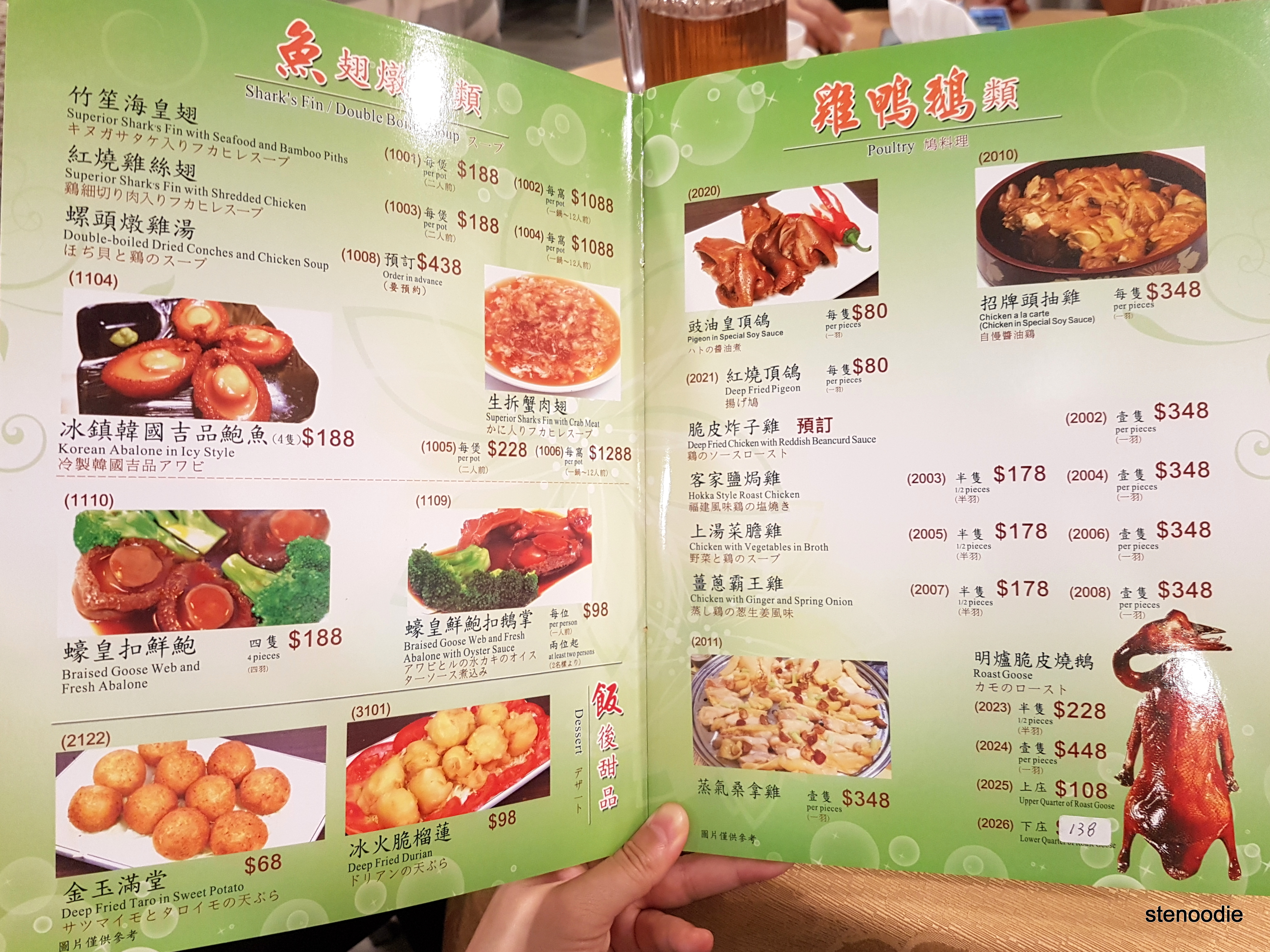 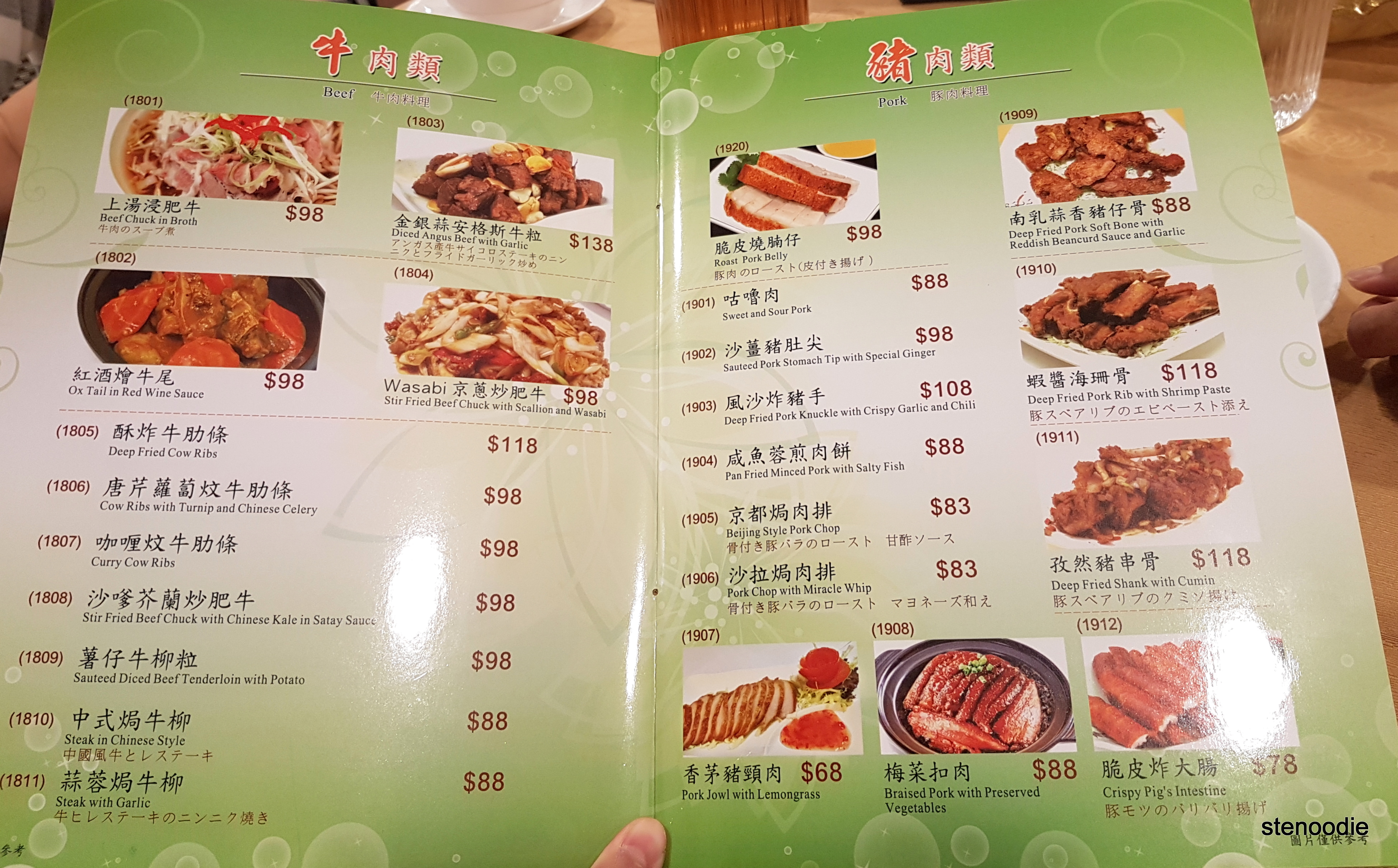 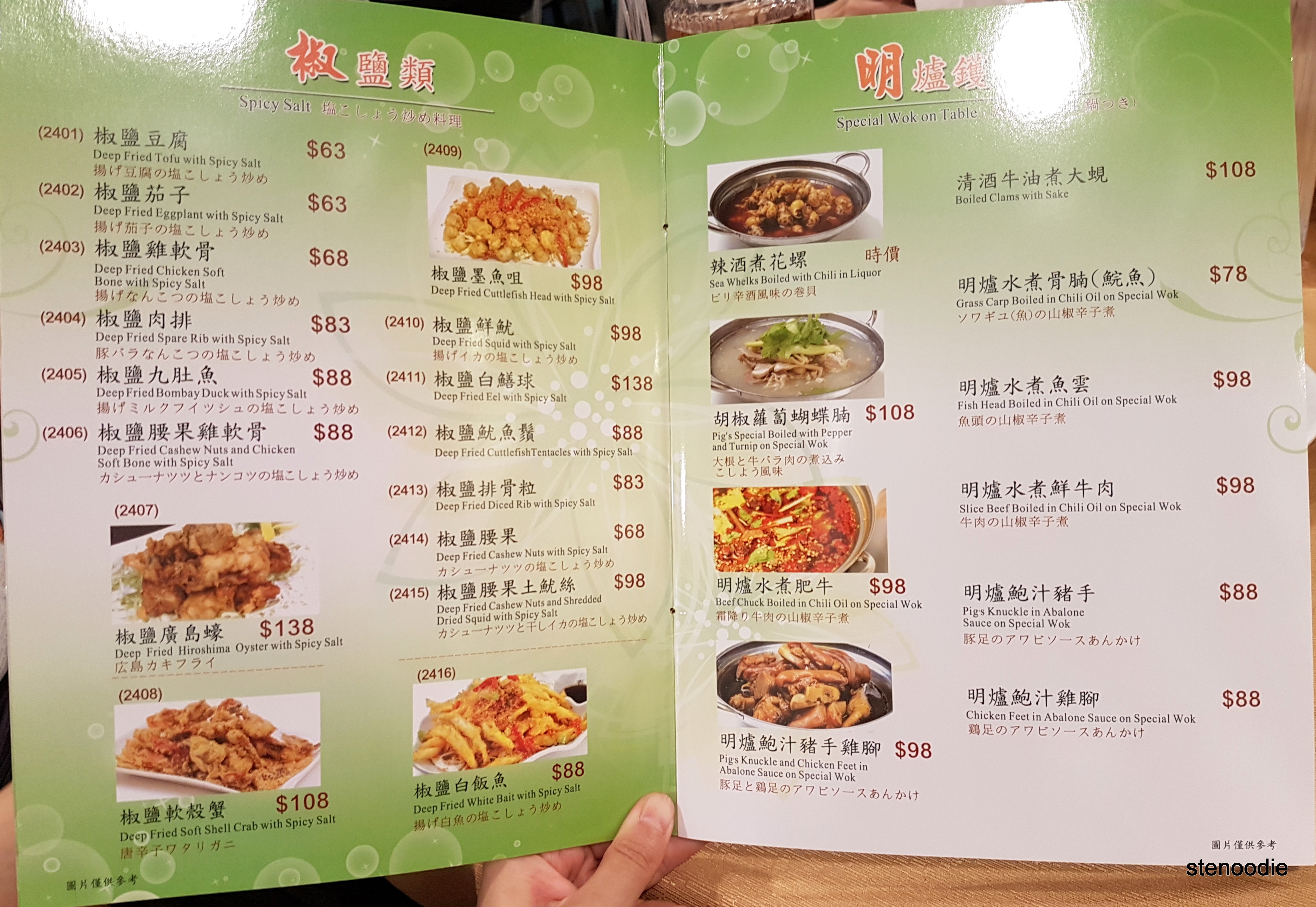 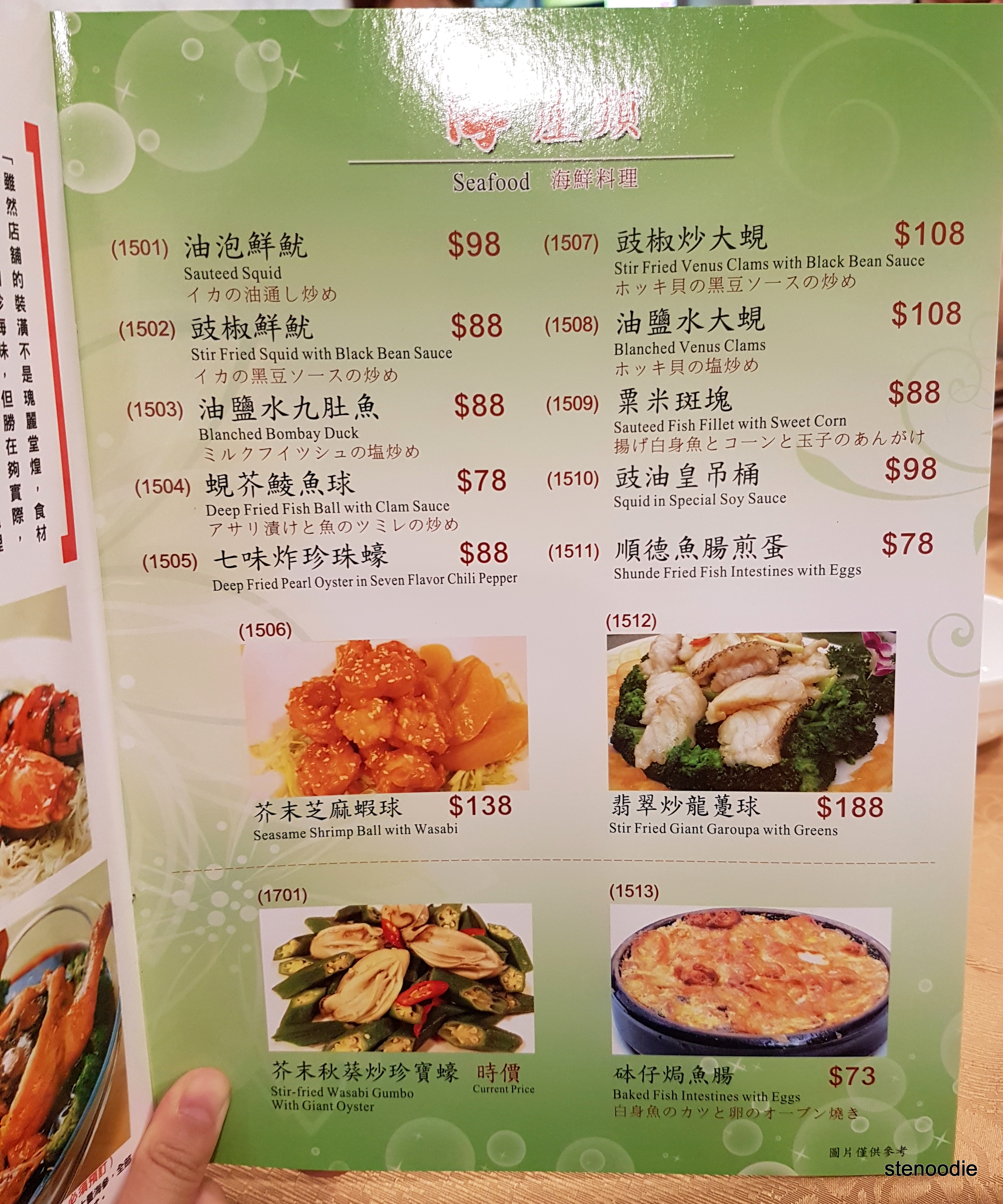 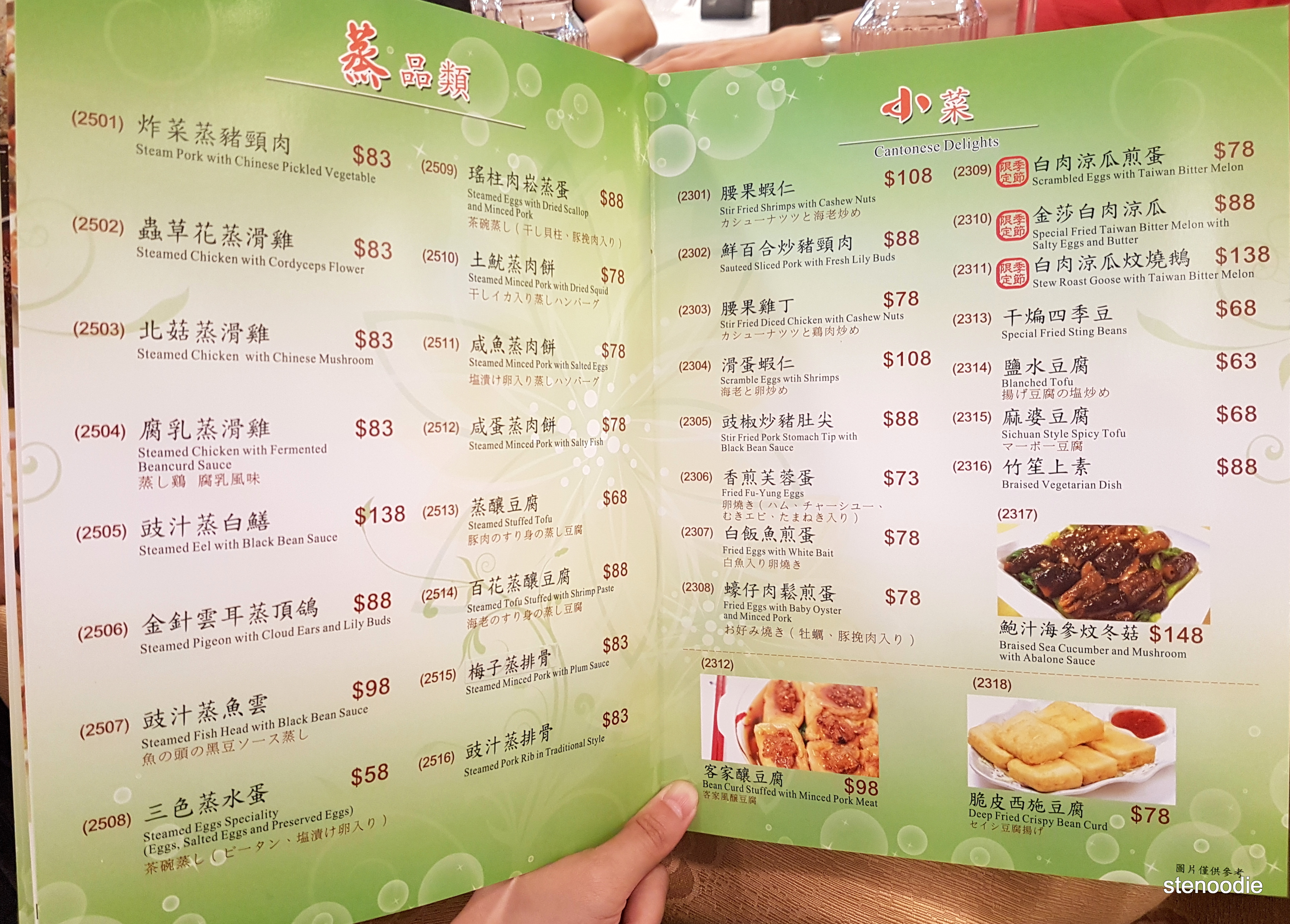 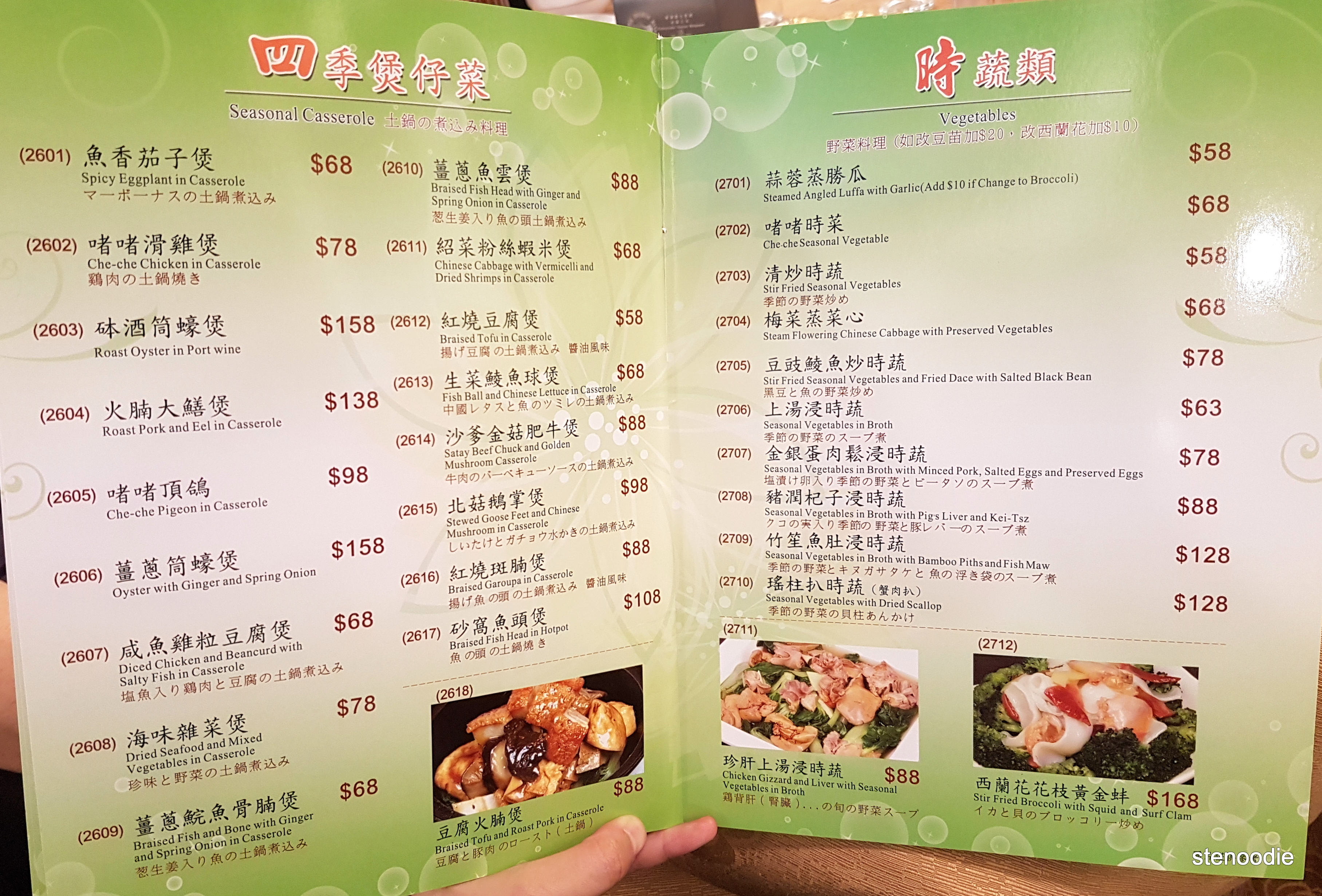 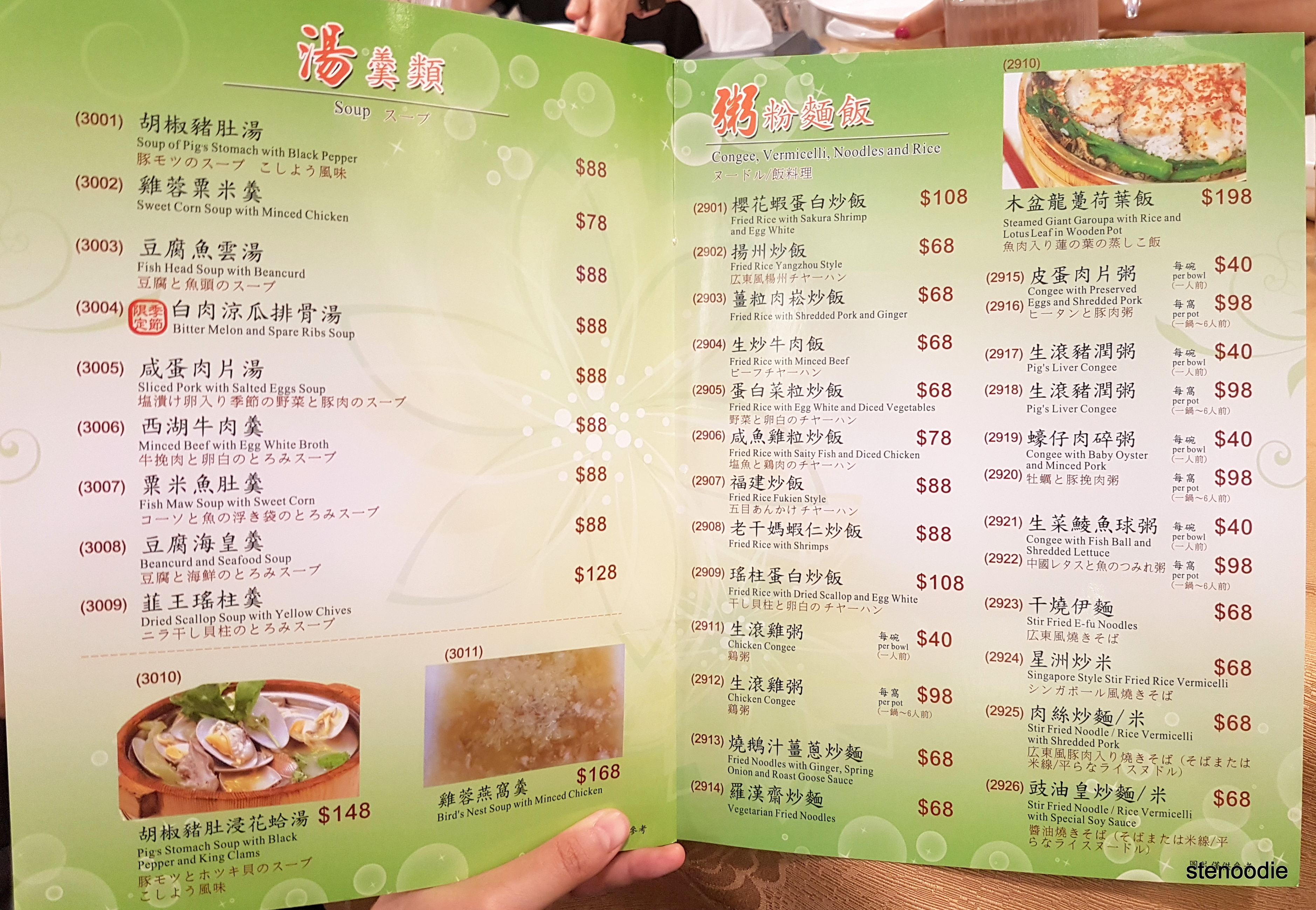 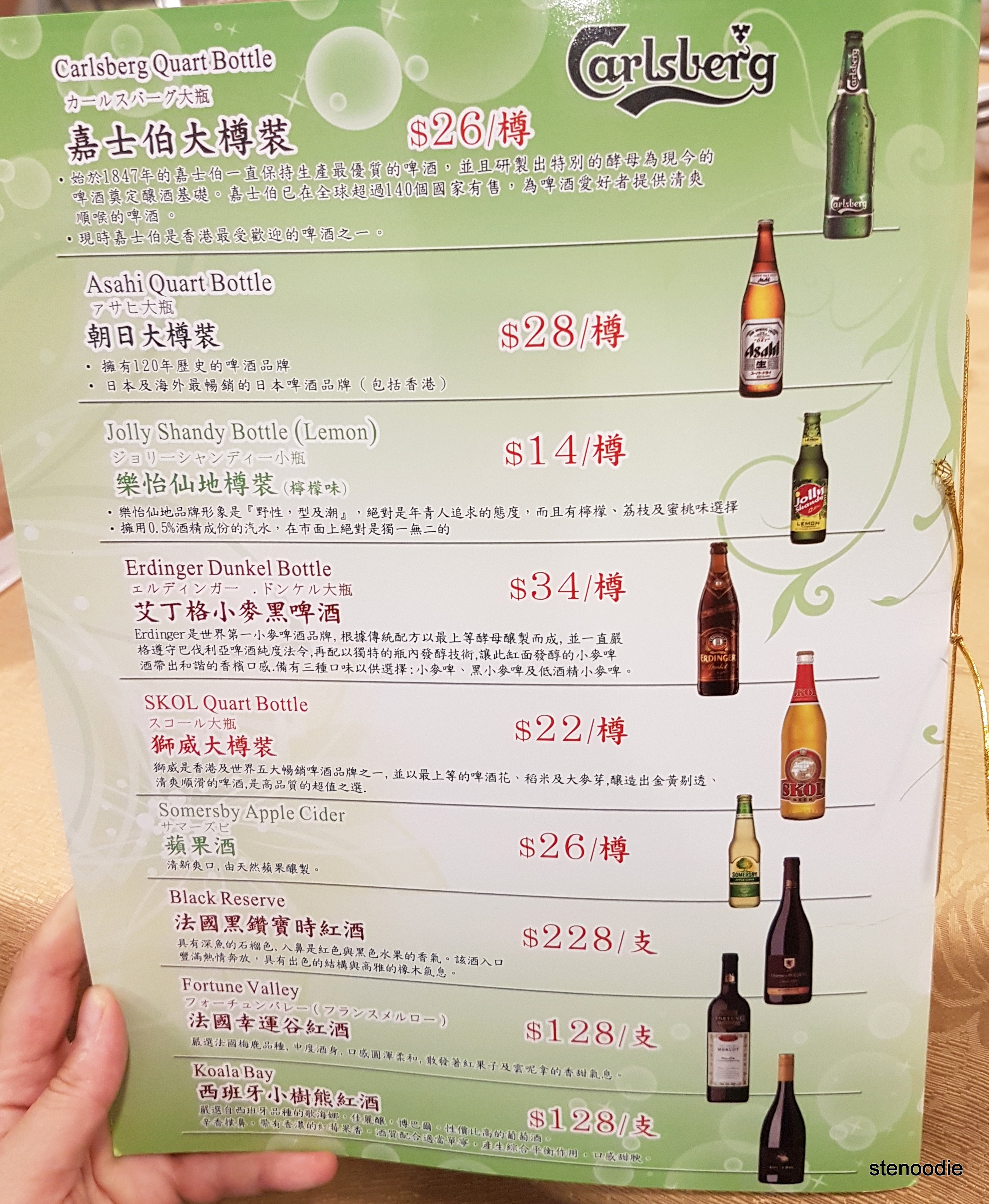 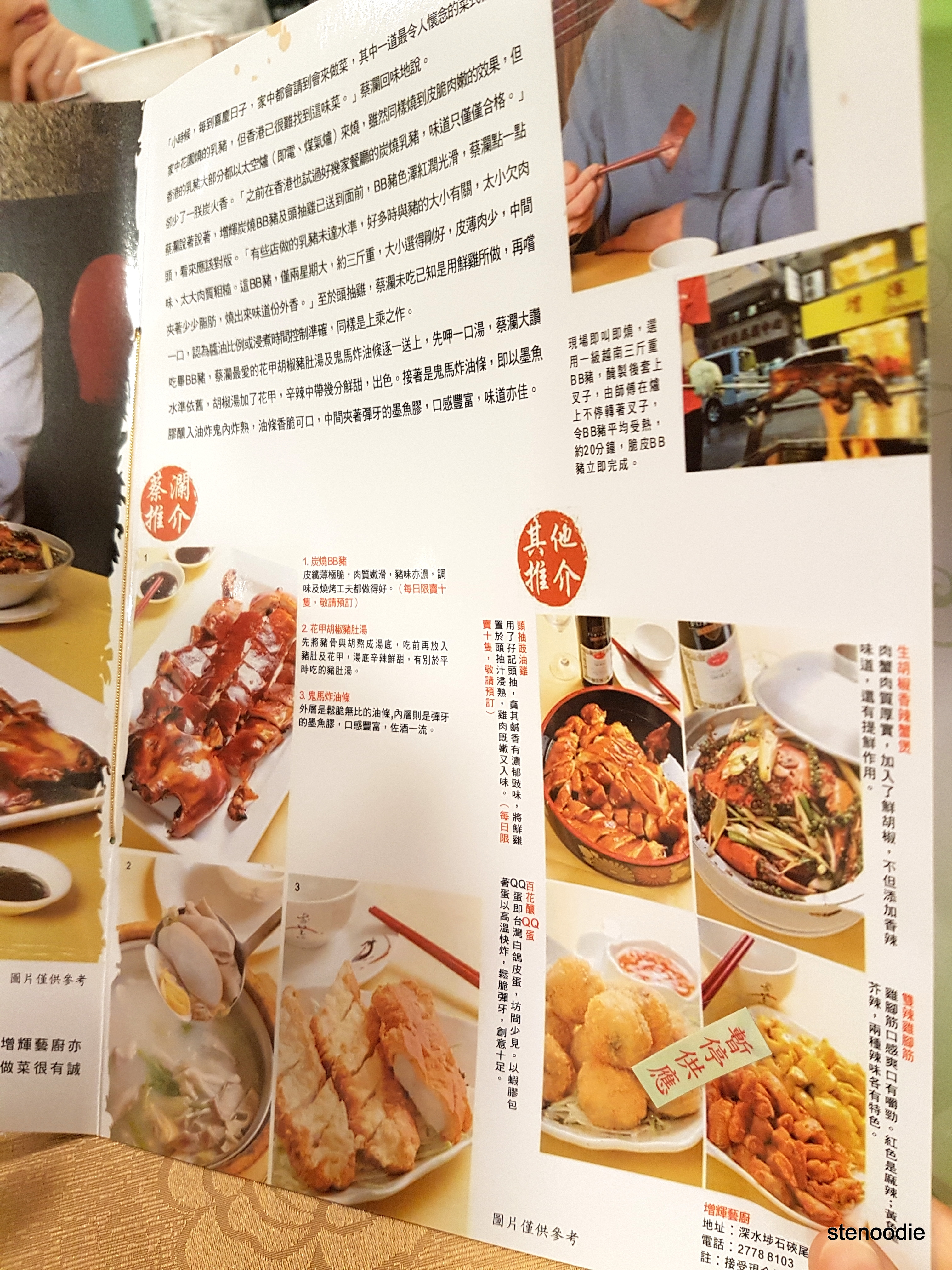 I ordered the Deep Fried Eel with Spicy Salt (椒鹽白鱔球) (you can tell I like a lot of salt and pepper dishes in my diet).  This was fairly good and I wish I had more. 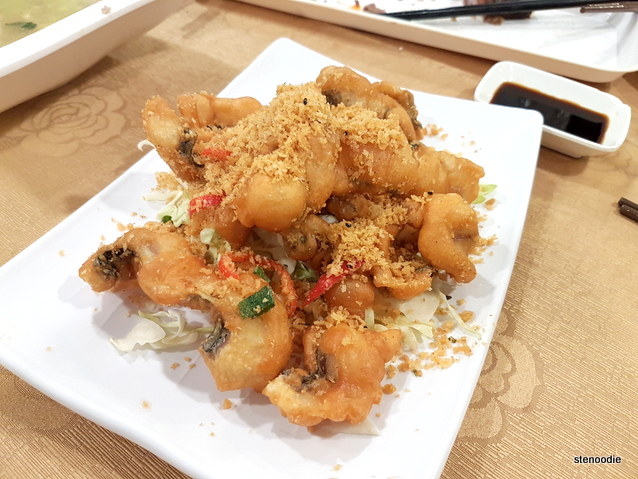 The Fried Crispy Pork (即燒BB乳豬) had crispy skin but I thought the meat was a bit on the cold side and would have tasted better if served entirely hot. 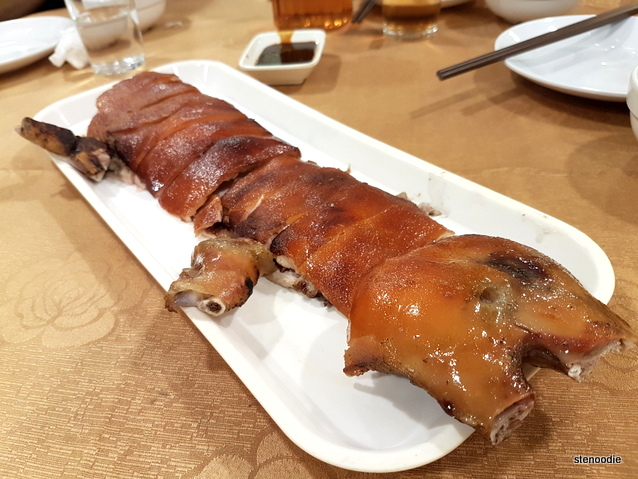 The Crispy Pig’s Intestines 脆皮炸大腸  were a classic dish that not many can stomach (get it? XD).  I have had better ones before.  It wasn’t crispy enough and quite chewy. 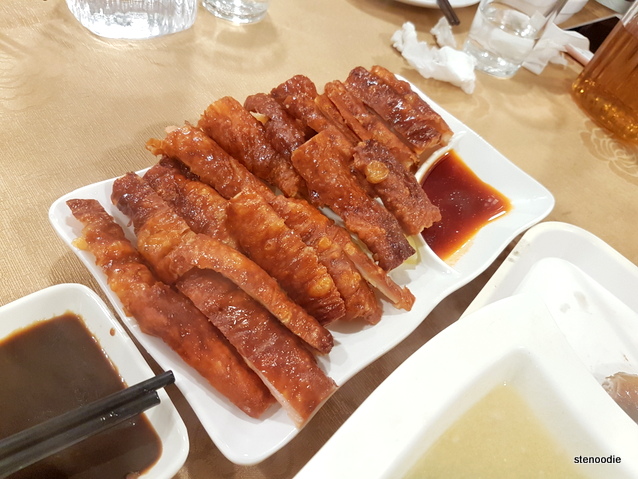 The Braised Garoupa in Casserole (紅燒斑腩煲) was a typical dish; nothing too special about it. 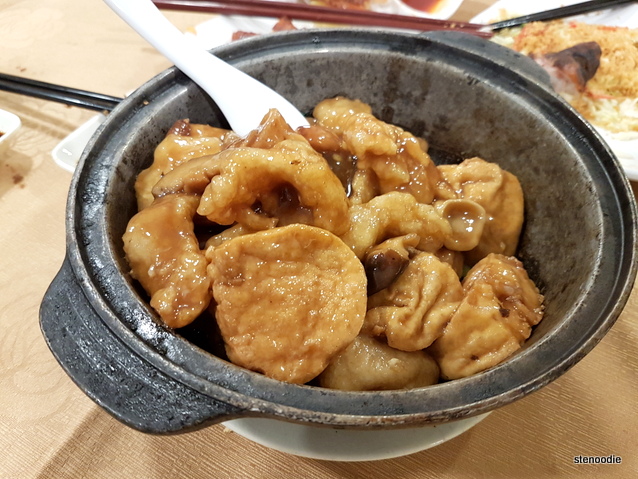 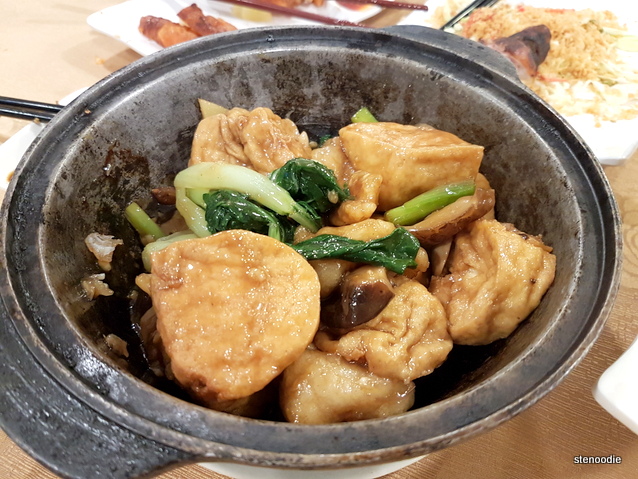 There were baby bok choy and mushrooms in it too

The Deep Fried Fish Ball with Clam Sauce (蜆芥鯪魚球) 78 was quite bad.  I’ve definitely had better ones before.  There were still pieces left on the table when we left.  No one wanted the rest of it. 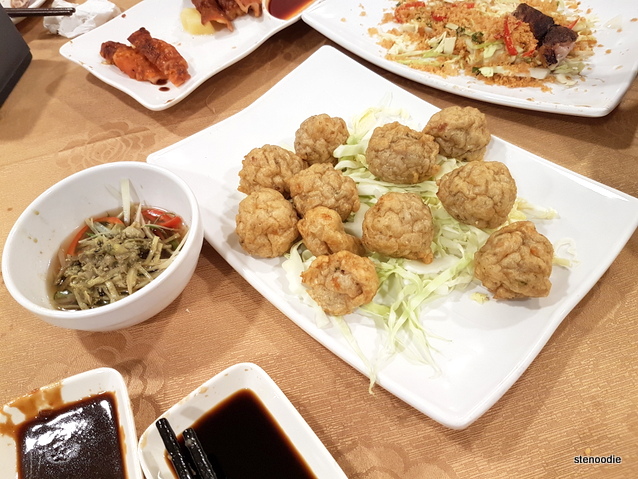 We received a wrong dish for the Seasonal Vegetables in Broth with Minced Pork, Salted Egg, and Preserved Eggs (金銀蛋肉鬆浸時蔬).  We were supposed to receive a certain type of veggies called yin choy (莧菜) in it but we received baby bok choy which is a cheaper vegetable.  We let the staff know and I honestly think they could have incentized something for us by giving something for free or remaking the dish for us but we were too lenient and just let it go. 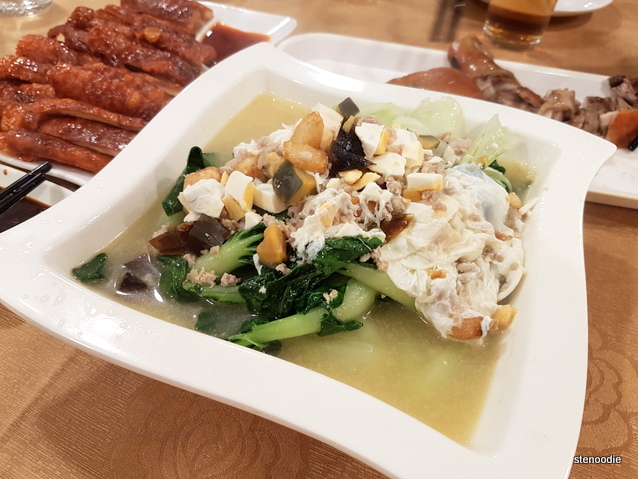 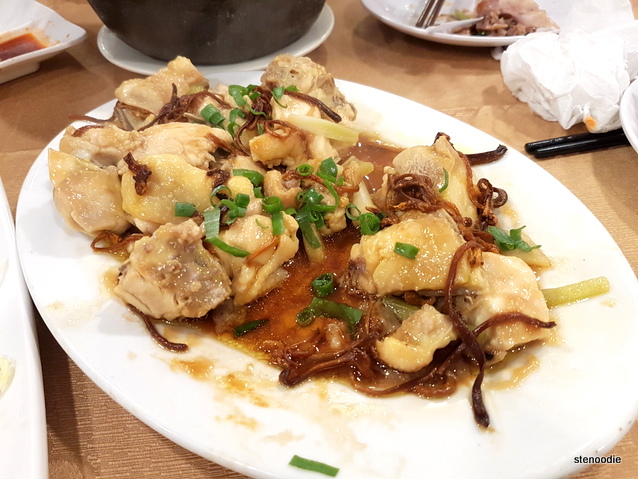 Later on, we added another vegetable dish (蒜蓉炒莧菜) which was a pure stir fried version of the original yin choy vegetables we wanted to order. 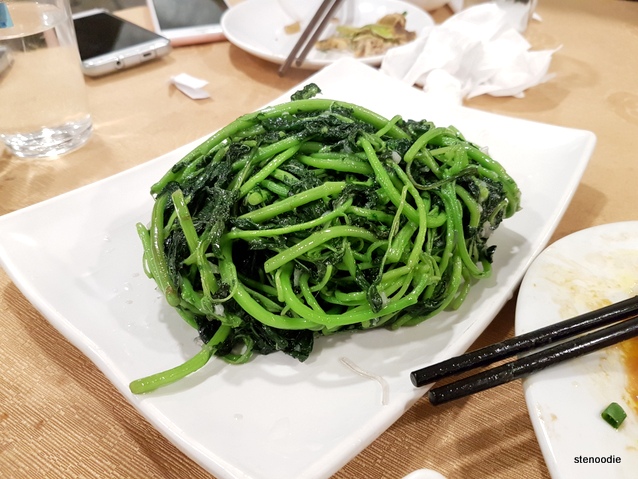 All in all, it could have been a better dining experience. 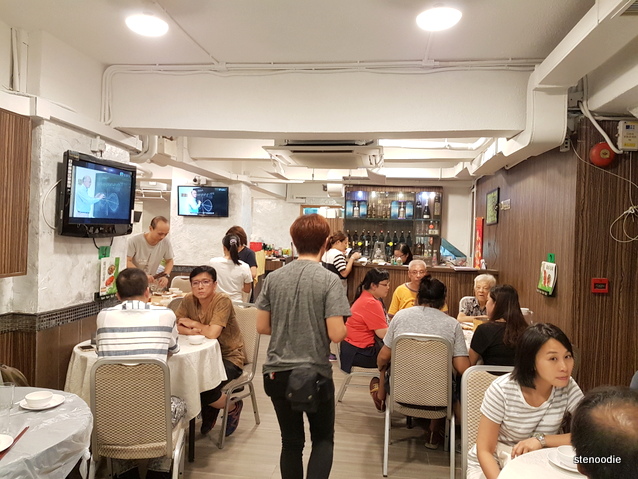 Picture from the entrance of the restaurant 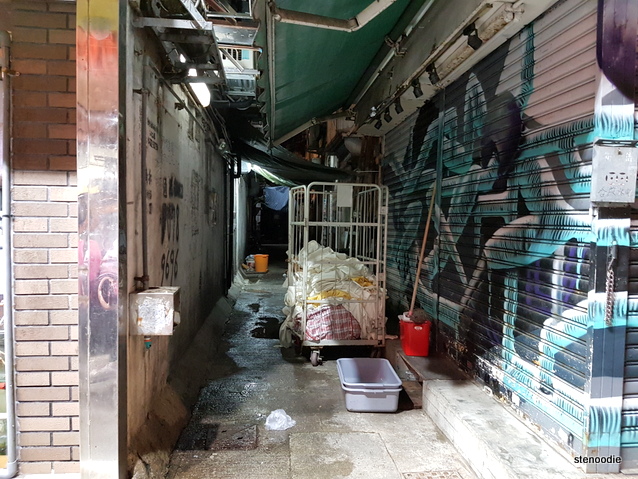 Alleyway into the washroom (which were clean!) 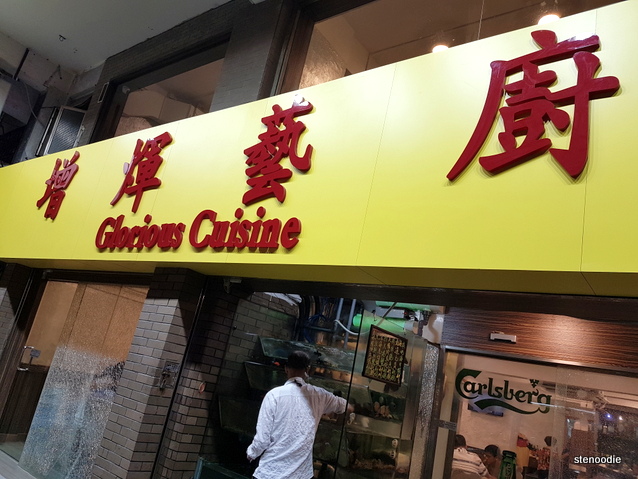 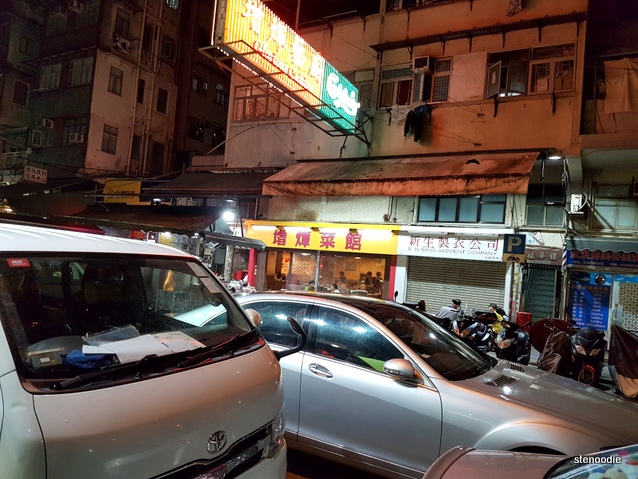 Across the street is their co-store (which is where our original reservation might have been?!