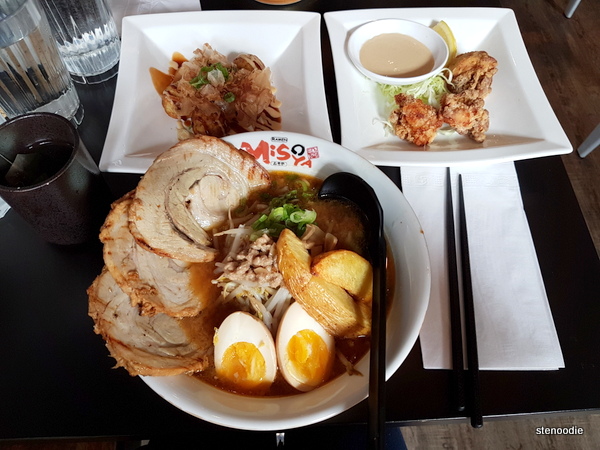 August 22, 2018:  A week ago, I was invited to the grand opening event of a new Japanese ramen franchise for a complimentary lunch to taste the food and to promote their opening.  Ramen Misoya hails from Japan with more than 100 stores and another 15 stores in the world.

More specifically, they have a popular restaurant in Montreal and Misoya New York has been recommended by the Michelin Guide for five consecutive years (2013~2017).  Ramen Misoya specializes in miso ramen where customers can choose “types of miso for ramen from Gold Kome Miso or Silver Shiro Miso and then add any toppings with extra price.”  For meat lovers, they recommend their cha-chu pork which is “very thick, 60 g/1 piece”.  The Kome Miso is made from kome (rice), soybeans, and rice koji. 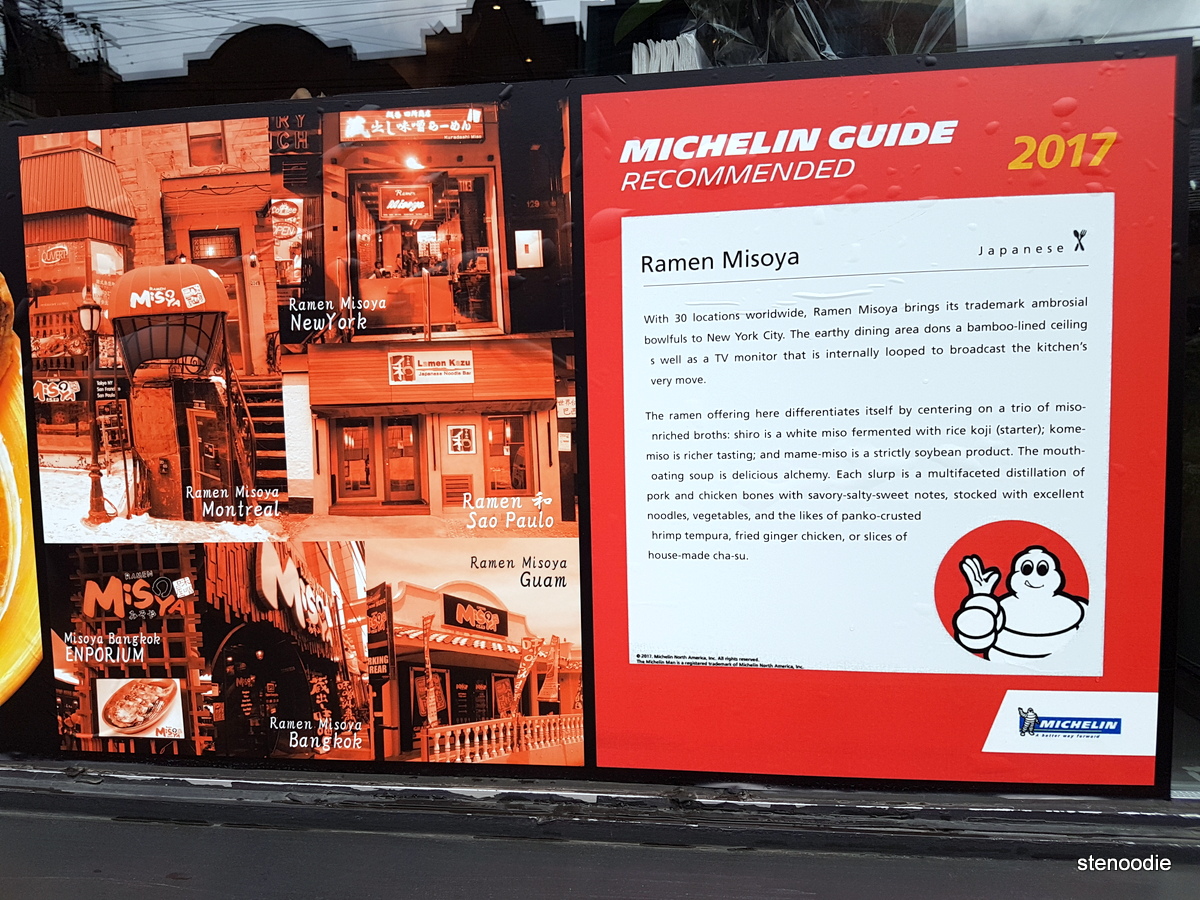 Misoya New York has been recommended by the Michelin Guide

Since for soybeans to become miso, they need to be fermented in miso barrels, on their storefront and as well as the cashier area, they have installed large wooden barrels as decor to really emphasize their focus on miso ramen. 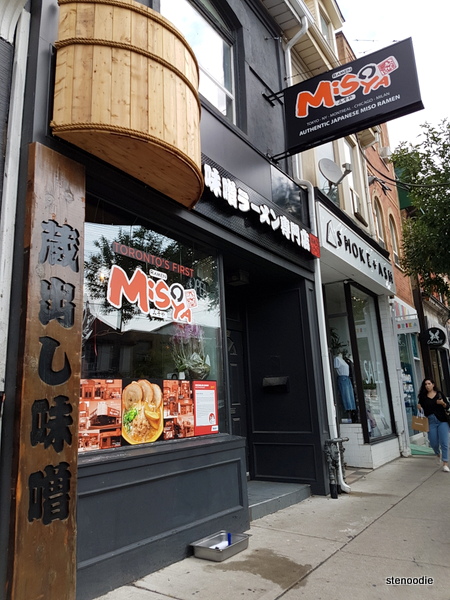 As such, I was quite looking forward to trying this unique Kome Miso since the entire brand was focused around it.

The grand opening event on August 22, 2018 was scheduled from 11:30 a.m. to 2 p.m.  I arrived promptly at the store right at 11:30 a.m. and happened to see the staff cleaning the storefront windows as well as removing a setup of a Chinese tradition of a roasted pig and incense before it was cleared away for us.  I recognized some familiar faces who arrived at the same time.

Once inside, I confirmed my name on the attendance sheet with the staff and received an information package and a ramen voucher and then chose a seat.  The small space of Ramen Misoya had tables stretching to the kitchen and murals showing photos of their other outposts and a bamboo partition resembling Japanese elements.  I noticed the lack of the “Japanese greeting” that welcomed guests in most Japanese establishments.

After I sat down, one server came over to greet me and provided me with the menu.  She informed me that I could order anything on the house that day.  I told her that I was waiting for my friend to arrive first.  Meanwhile, I took a good look at the menu and was impressed that they had a lot of selections of ramen. 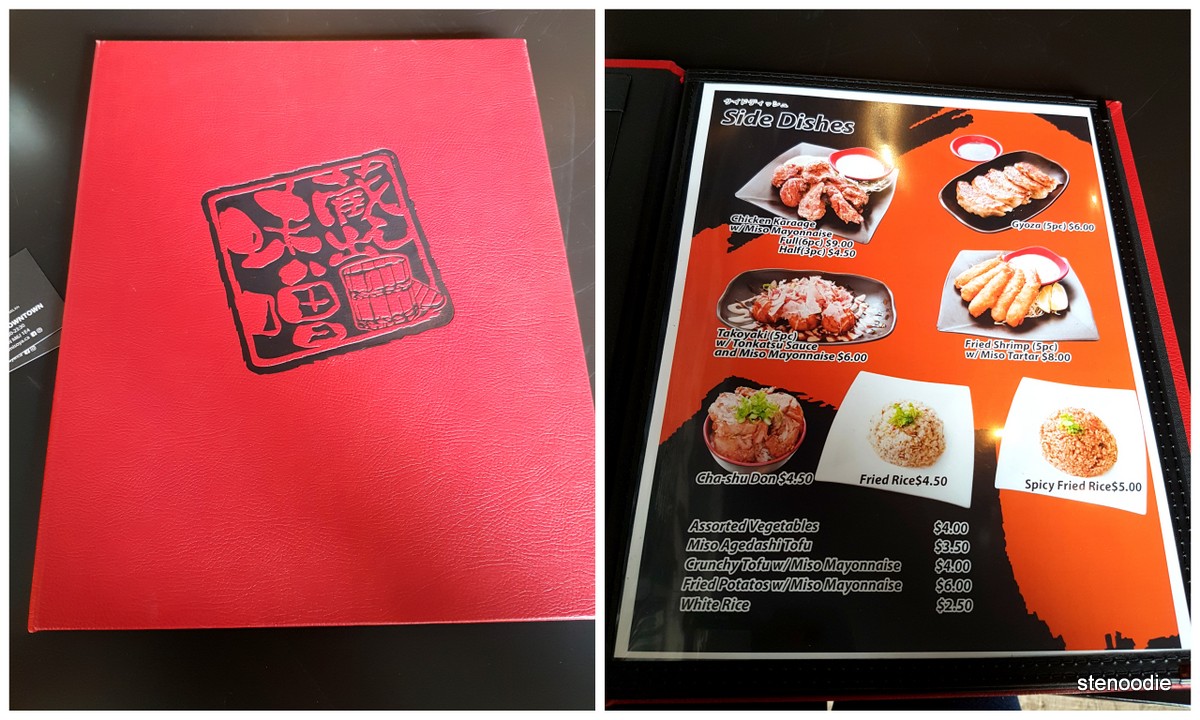 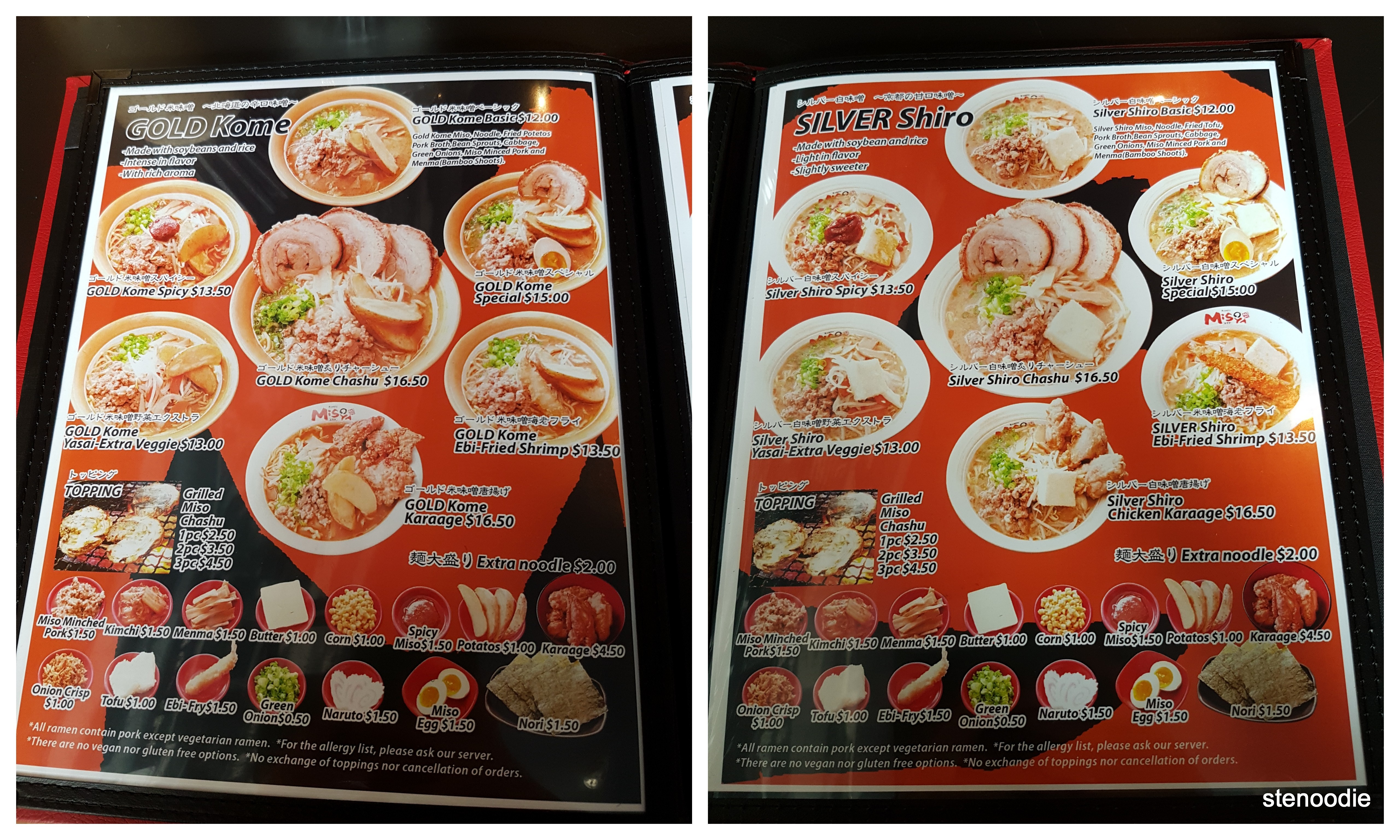 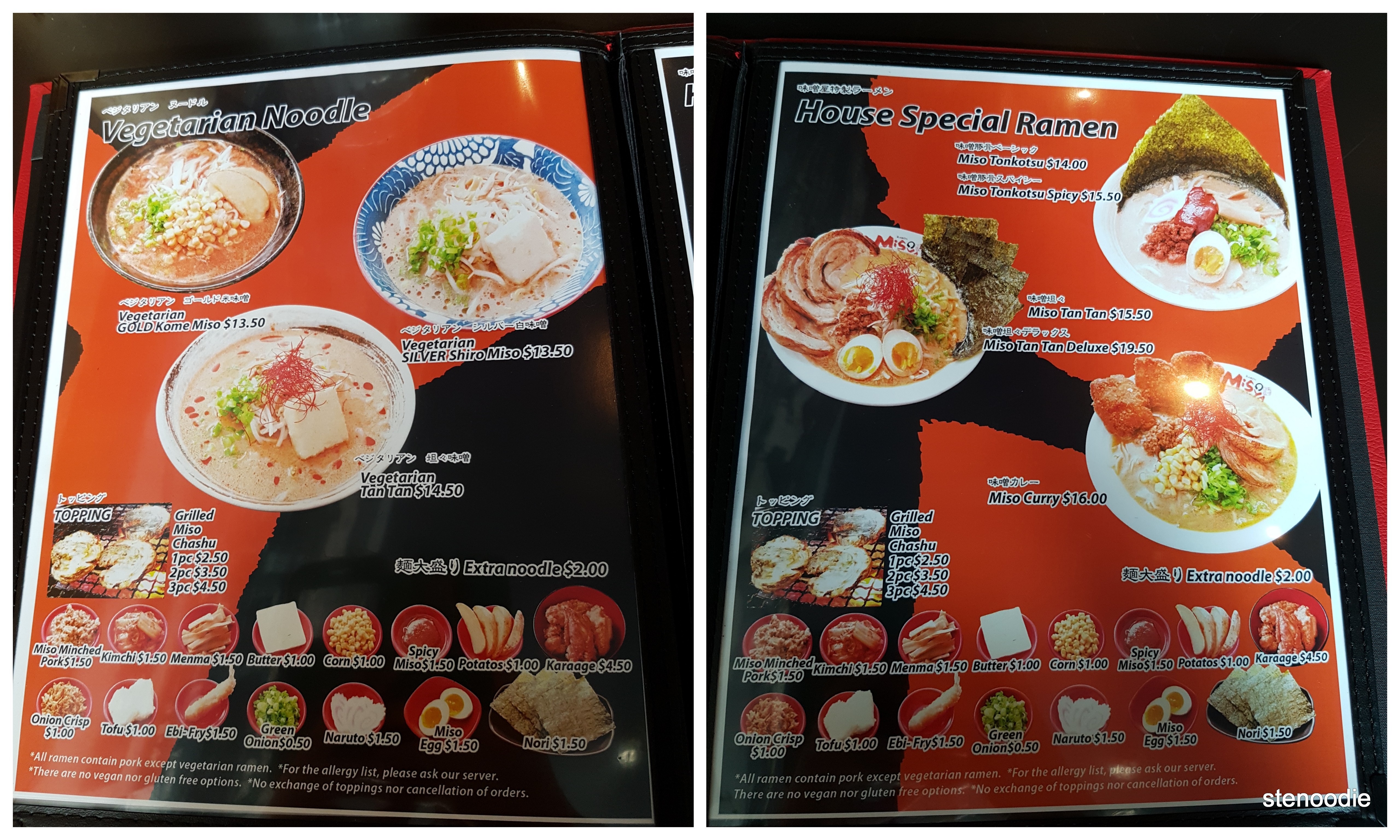 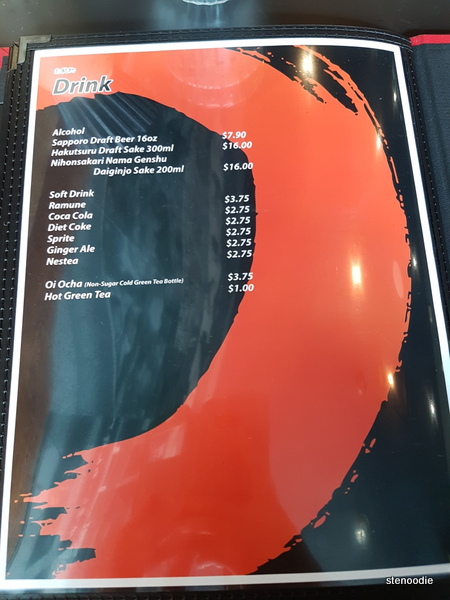 Gradually, there were plates of appetizers brought out by the servers and put onto the table overlooking Queen Street for photography purposes.  These plates were just for photos and not for consuming. 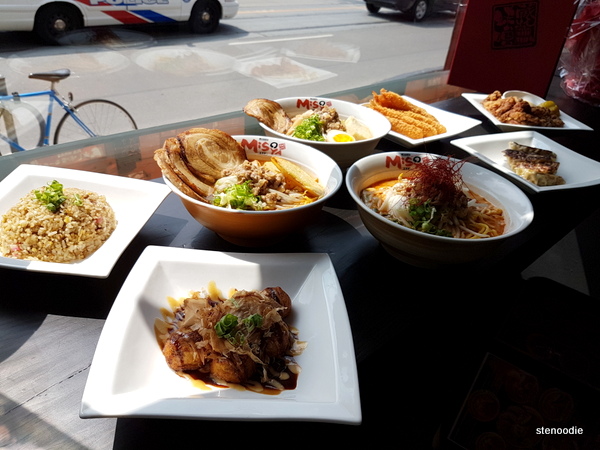 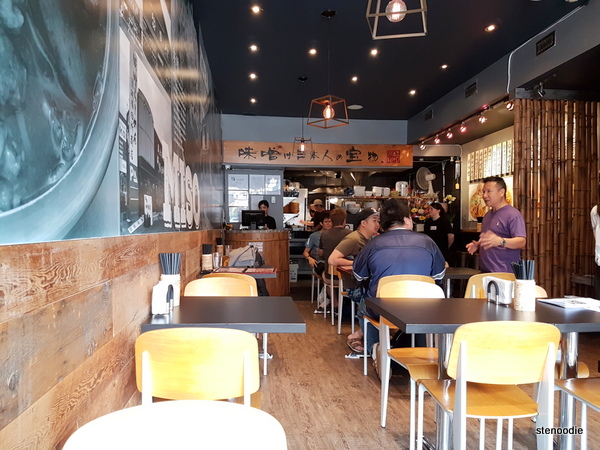 At this time while waiting, I noticed a male staff (he looked like he was the owner) approached a table of four food influencers and asked them whether they spoke Cantonese or not.  The group acknowledged that they did speak Cantonese, at which point the male proceeded to tell them all about the restaurant and the menu in the Cantonese language.  I overheard all of this because the restaurant is small and I could distinctly pick out what he was saying to them (for example, he mentioned that there were going to be potatoes in the bowls of ramen). 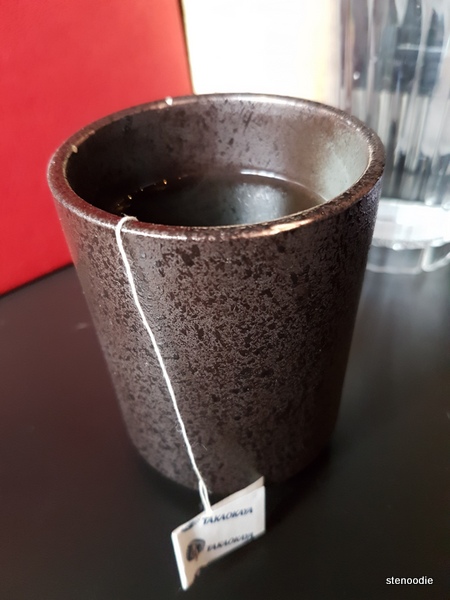 Shortly, a server did notice me sitting alone and came over to ask me what drink I wanted to order.  As the drink menu was mostly of sugary beverages and I wanted something other than water for once, I asked for the green tea.

Soon, my friend arrived.  Upon her arrival, she also ordered a drink.  Then, I called the server over so that we could place our orders.  The first thing that the server said was that orders couldn’t be placed yet…  I immediately asked why we had to wait as it was lunch time and not everyone can stay for a long lunch considering it was a workday (it was already past 20 minutes into the event and nearing noon and regular working people only have only one hour set aside for lunch.)

The server said she would ask about this for me and proceeded to talk to some staff who were standing in the kitchen.  She came back and was able to take my order this time.  (But this was not before I thought it was absurd and unreasonable of them to withhold our orders — why did we have to wait to order if the grand opening event was slated to start at 11:30 a.m.?).

On the menu, I saw a lot of choices and wanted to know what was the difference between the “Gold Kome Chashu” and the “Gold Kome Special”.  I asked the server about it, but she wasn’t able to give me a clear answer.  She told me to just look at the photos.  I did look at the photos, but as a guest, I wanted a proper answer about what the difference between two bowls of ramen were.  What if I had an allergic reaction to an ingredient?  Her answer was not informative to me.  I ended up ordering the Gold Kome Chashu ramen with a side of miso eggs.

My friend ordered the same ramen (as it seemed to be their classic standard).  We also ordered two appetizers to share (this also had to be approved with the kitchen staff by the server first). 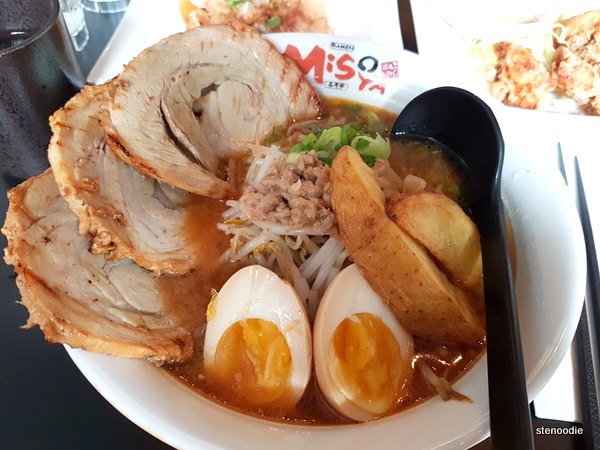 We received the bowls of ramen a lot quicker than I anticipated (even before the appetizers had arrived).  The bowl of Gold Kome Chashu was huge!  It included three large pieces of cha-shu pork, two slices of potatoes, minced meat, bean sprouts, ramen noodles, and miso eggs in an miso broth.

I tried the miso broth first and couldn’t detect much miso flavour in it.  My friend said the contrary and that there was a miso flavour.  To me, the lukewarm broth tasted only like regular salty broth — nothing too special and didn’t have the kome (rice) tones either.

The first piece of cha-shu was incredibly tough and hard to chew through.

The second two pieces were much better.  The miso eggs were pretty good.  I especially liked the smoothness of the egg white part.  The minced meat was very flavourful and probably the best part of the bowl.  The potatoes were slightly fried on the exterior so that they weren’t mushy in the broth.  These were average tasting potatoes. 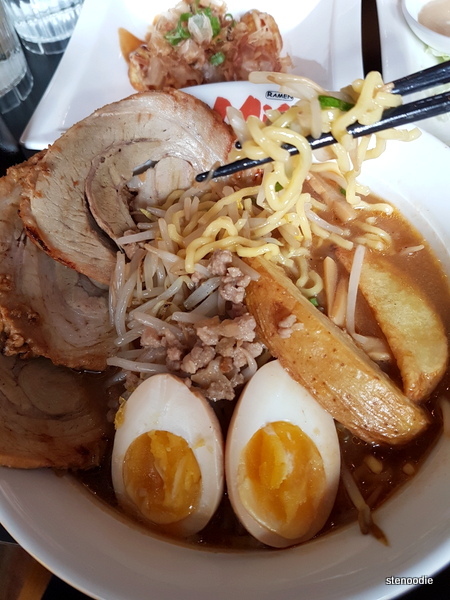 The most disappointing part were the ramen noodles.  In my bowl, all of the ramen noodles were short and chopped up!  None of the ramen in my bowl were longer than 5 cm…  What gives?!  I couldn’t even do a proper ‘noodle pull’ since none of the noodles were long enough to be even pulled up.  It was like a mash of chopped up noodles in my ramen bowl.  I wasn’t sure that this was something I needed to inform the staff about at the time, so I didn’t say anything.  The ramen in my friend’s bowl were of the normal length.

Even then, the taste of the ramen to me was so-so and seemed more of the lower grade quality.

The Chicken Karaage with Miso Mayonnaise was okay.  It was crispy on the outside but the meat was a bit dense for my taste. 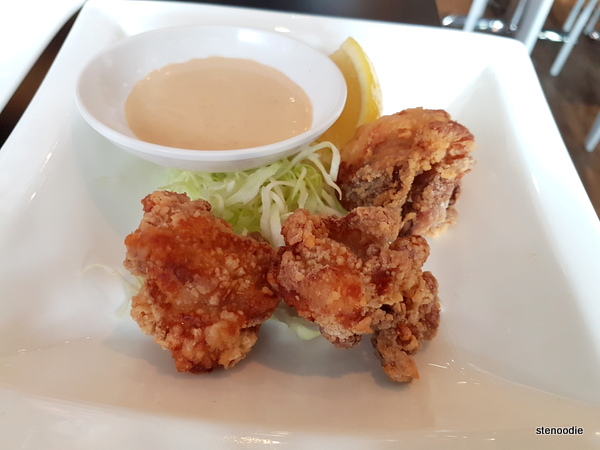 The Takoyaki was actually really tasty!  They were served Tonkatsu Sauce and Miso Mayonnaise.  Each Takoyaki was a perfect small sphere and were very firm octopus balls with the right texture of batter inside. 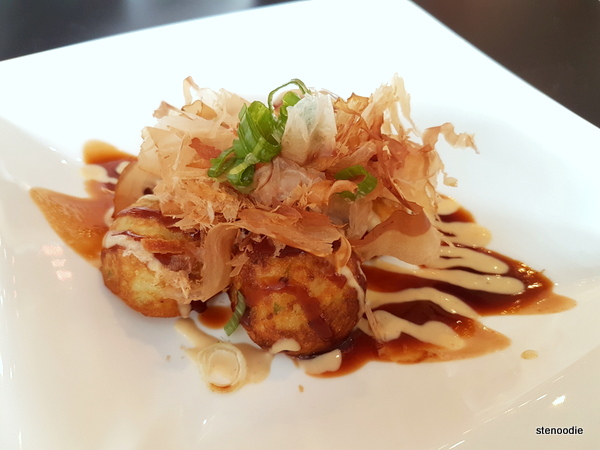 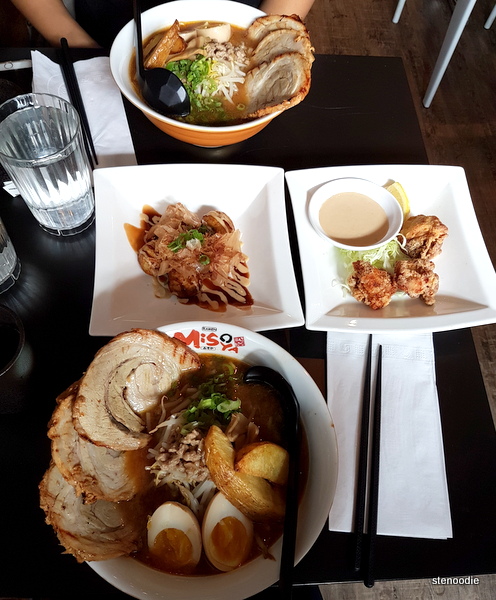 The most regrettable part of the grand opening event was actually the service we received.  The same male staff that I mentioned before came over to our table and commented on my bowl of ramen and my guest’s ramen and said something along the lines of, “Wow, so much meat in your bowl.  You probably can’t finish it.”

I couldn’t believe he said that to us that it took me a full second to respond with “Wow, are you doubting us?!” But he had already walked away from our table at that point.  His comment was the rudest comment I’d ever heard from a staff at a tasting event.  Was he implying or doubting our ability to finish the food?  Why was there even a reason to say something like that to an invited guest?!

I brushed it off and thought that he was either careless in his words or joking to us.

The worst part was when he came up a second time to our table when we were finishing off the last contents of our bowls and commented, “Wow!  You really finished all of it?!  It is too much meat.  Ordering one slice of chashu is enough already.”

Again, I was appalled that the male staff said this to us.  It was especially shocking that his second comment reflected the nature of his original comment and confirmed to me that his words were not said in jest at all.  So rude!

As I mentioned, there was a spread of dishes spread out on the table overlooking Queen Street.  It was only after everyone else had taken photos (there was a line-up for it) that I went up to it to snap a few photos.  During this time, the staff decided that the sunlight streaming in through the windows was too bright for the photos and they wanted to move the dishes to an inside table for better photos.  I was not even standing there and taking photos for two seconds when a younger male server asked me to stop taking photos because they were relocating the dishes.  Um, excuse me?  How tactless.  I wasn’t even standing there for two seconds (and I barely take much time to take pictures anyway when compared to other “foodies”) — he could have waited for me to finish taking the photos before giving me that comment.  What if I wanted to photograph the dishes there as is?  Everyone else already took their photos and I had only simply waited until everyone was done in order to take mine.  I felt unfairly targeted.

As such, I had such a bad impression of this restaurant — the food and the service — that I have no interest in recommending it to others.  I did receive a free ramen voucher from the restaurant that I might redeem.  Hopefully, a second visit will redeem this restaurant. …  Nevertheless, I was so unimpressed with the tasting event.  I couldn’t believe the host of a grand opening would have such ugly words to say to their guests.  It’s unprofessional, insulting, and demeaning.

(After the event, Saki [the original point of contact who had sent out the event invitations] reached out and thanked all the influencers for coming out to the event.  I took this opportunity to thank Saki for the invitation again and informed about my disappointing experience.  I first asked Saki whether they wanted to hear about my negative experience and Saki replied with yes, that they wanted to hear about it to improve themselves.  However, after I sent the e-mail summarizing the low points of my visit, my e-mail was never returned with any reply. …)

FTC Disclaimer:  Although Ramen Misoya reached out and invited me to a complimentary tasting, the opinions expressed here represent my own and not those of the restaurant.