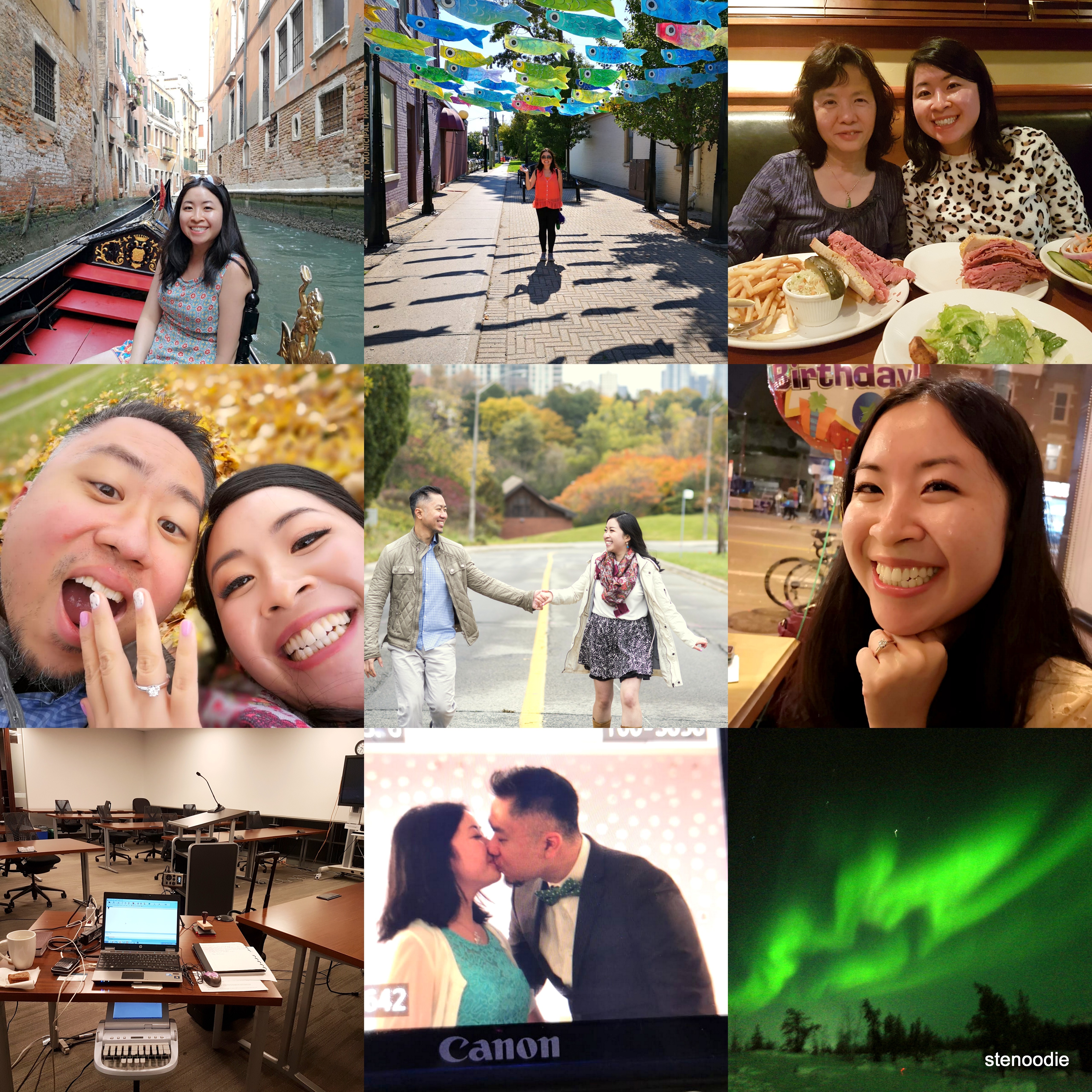 This year — what can I say?  2018 was the year that the most ever happened to me, in terms of positive amazingness/major life milestones and health-wise.

First of all, before I get into the bulk of what happened this year, I like to gloat about the trips that I had the privilege to take this year.  This year, in February, I got to travel to Yellowknife, Northwest Territories on a five-day trip with my extended family members to go dog sledding, “ice fishing”, and view the Aurora Borealis.  This was an amazing bucket-list travel spot and we were so blessed to be able to see the beautiful natural phenomenon two nights in a row.  It was amazing.  We also took a short trip to Ottawa, Kingston, and Quebec too (and a separate Ottawa trip for the ice dragon boat race).

In September, I was able to travel to Italy and Amsterdam for two weeks with my love.  It was such a foodie and sightseeing trip and I’ll never look at Italian cuisine the same way.  The food there was unbeatably tasty and just so different than what’s available in Toronto.

Throughout the year, I was blessed to be treated to four separate all-expense paid trips to the town of Port Hope as a media blogger.  All meals, hotel accommodations, activities, and gas were compensated for us.  I could not have asked for more.  These trips were so priceless!  I’m so thankful for the opportunities.

(I’m rounding out the final days of 2018 with a getaway to Niagara Falls and then the two weeks in January 2019 will be spent in my birth city!)

In terms of blog things, this year, I haven’t blogged as much as in years past (In 2017, I published 360 blog posts while in 2018, I published 226).  I have a lengthy backlog (my blogs are still stuck in the Italy trip era and I have a number of restaurants and other posts lined up still to be published).  I don’t participate in foodie events anymore (I actually turned down the few that I received because I’d rather focus my time on work or for myself — I don’t really want to promote things that I’m “forced” to eat or advertise for others superficially.  I’d rather go to places I personally enjoy instead).

This year was the best work year for me.  I churned out the most transcripts I’ve ever done (so many transcripts went out with my name on it).  Last year, I set myself a goal of earning $_5,_ _ _ and I actually exceeded it!  (See, goals when written down really do work!)  My focus this year in 2018 was all around steno work and making money.  For me as a freelance court reporter, I can work as much as I want or as little as I want to make the dough.  I really focused hard this year and I really saw the fruits of my labour.  I already have my goal number for next year.  Let’s see if I can reach it (with the proviso of my health in first priority).

(A new chapter also began because I started another ____!  New experiences and locations arose because of this and I really enjoyed that.)

This year, I started stenoing cleaner and had a couple of rough draft jobs.  (I think I prefer rough draft only jobs rather than delivering a full certified transcript — the editing time is significantly less, but the stress that comes with it is more pronounced.)  It would be nice to see my scoping time go from 20 pages to 38 or 40 pages per hour next year.  That would be amazing to cut down my scoping time.  That means I need to write cleaner/shorter and take time to get to know my software better and smarten my writing.  I plan on taking the local test in February (let’s see if I can pass at least one leg?).  If I can spend less time scoping/editing, I can have less screen time and spend more time on myself.

With that being said though, because I said “yes” to so many jobs this year, I also saw a downturn in terms of my health.  I worked so much and so hard (to maximize my working hours, I found a “hack” — I would sleep at 10 p.m. and then wake up at 2 p.m. to continue working) that three separate health incidents happened this year that were a clear sign from my body to say “Stop!  I’m stressing out and I need to rest” (HS in May, shingles in November, fungal bacteria in December).  I’ve never experienced these before and if these are not clear signals from my body that I need to boost up my immune system and slow down work, I don’t know what is.  Early this year, I had run out of the stock of daily multivitamins that I had taken for the past couple of years and never replenished it.  The lack of extra nutrients could be the reason for the sudden bouts of illnesses.  I need to take better care of myself next year.  I need to continue my daily vitamins, eat more fruits and vegetables, and sleep by 10:30 p.m. at least five nights out of seven (obtain 7 hours of sleep per night).

I got engaged this year!! 😀  I turned a milestone birthday and that’s when my love proposed (we also celebrated two years together). 😀  Wedding planning was so exciting and fun during the first two weeks and then the stress came in.  Something else really life-changing happened this year too, but I’ll save that for next year’s post.  I can’t believe this year included such a gigantic life status change. 😀 :O  We never would have guessed.  I hope that our wedding next year goes smoothly and splendidly and our meticulous planning ends up with the best moments and memories. 😀

2018 was absolutely beautiful with amazing trips, milestone events, plentiful work flow, but very serious reminders of my own health — every single one which kept me humble and grounded.   They’re a grave reminder that I’m still human and as much as I want to do, I have to watch myself and my own health first.

I said that I would try to eat more vegetables last year for 2018’s goal.  It didn’t happen because after the Chicago trip in December 2017, I had a taste of a good steak and wound up eating more meat again.  I think it happened especially because a solution of the HS incident was to remove nightshades out of my diet.  By eliminating tomatoes, potatoes, eggplants, and peppers (vegetables that I routinely eat), I felt like it was convenient to eat more other things like meat and carbs instead of vegetables — I was afraid other vegetables might be to blame for the inflammation as well so it was just easier to avoid them.  Plus, the heavy meat and carbs filled me up and kept me satiated and full, which allowed me to work longer hours.  For 2019, I hope to have a better balance again with more greens and a rainbow diet.  I should choose more vegetarian dishes but still include essential protein like eggs and smaller portions of meat.  I can’t avoid all meat since the lack of B12 frequently results in cold sores for me, but a diet consisting majorly of rice and meat isn’t enough either.

For next year, our housing situation might change.  It’s so easy to work every day and eat and sleep, which makes cleaning a thing that I literally sweep under the carpet.  Need to get rid of unused items consistently next year and enhance the space we have.  I’m looking forward to the change.

This year, I ate out less!  I started to really appreciate eating at home more (especially since I had to when figuring out how to treat the HS incident).  Rather than dining out at restaurants, I explored the grocery stores more and purchased take-out items more often than before and thus had more meals at home.  I really appreciated eating at home this year.  Plus, the fact that everything has gone up in price these days also makes dining out less appealing than before.  That’s not to say I don’t enjoy it.  I still loveee the experience of eating out at restaurants, but I also really appreciate making things at home now.

I started eyelash extensions and nail routines and resumed facials this year. XD  I also started seeing a really good Chinese practitioner (who basically healed my HS).  Since then,  I’ve continued the visits and the Chinese medications.  I used to be quite bloated and I never knew what the problem was.  After cutting out nightshades and continuing the Chinese herbs this year, my bloating drastically went down.  I can see the difference in photos where my face and legs are so much slimmer — back to my actual original size (and it’s not like I exercised more or dieted this year).  I can wear a lot of my old clothes again too.  This was a huge thing for me.  I also got into the habit of chewing every bite more thoroughly before swallowing.  I think this helped a lot with the bloating as well (probably helps with not overeating too).  This practice also makes me appreciate the taste of my food more.  When you chew your food mindfully, you are aware of the moment, the flavours are more pronounced, and you enjoy the eating process more (so you actually eat less too).

The result of my health is all on me — I need to slow down and care of myself better.  In terms of my work schedule, perhaps I should only accept a maximum of four days of work a week and say “no” to jobs more often without feeling guilty.  I’m still very much an introvert and need the ‘me time’ to recharge and reflect on moments and events.  I also am very perceptive about other people’s emotions (being an INFJ) that I need to recharge often and “release” whatever I’ve seen or absorbed (I’m like a sponge).  Otherwise, the over-stimulation really affects me by making me cranky and feeling stressed.  This is something I constantly need to remind myself about.  (Interestingly, I took the Meyer-Briggs test again recently and found out that I now exhibit characteristics of an ISFP, “the adventurer”, which is not what I really identify with.)

Basically, this year was work > blogging by a long shot.

Next year, I’ll officially have a full-time wife status too.  I’m not sure I’m ready? 😀  I have from now until then (about nine months) to enjoy my last days of living a single life.

I'm a stenographer, foodie, avid traveller, and new mom who loves to share her experiences with the world.
View all posts by stenoodie →
This entry was posted in Life and tagged 2018 year in review, focus on your health, good-bye 2018 and hello 2019, happy 2019, health first, intentions for 2019, nightshades and HS treatment, Reflections of 2018, things that happened in 2018, wishes and hopes for 2019. Bookmark the permalink.