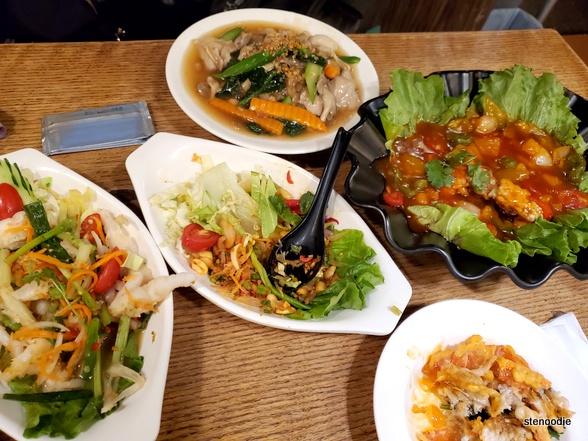 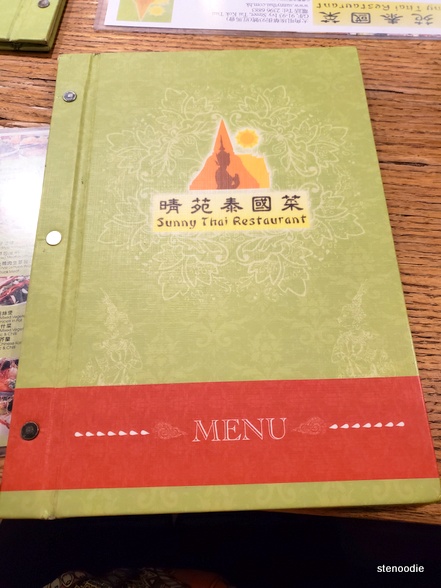 First of all, I had wanted to try the Prawn Sashimi Salad, but the server said that their dedicated chef who prepares that was not in yet until 6 p.m.  Thus, I opted for the Fried Prawn with Sweet and Sour Sauce instead.

We also got the Thai Style Pomelo Salad.  I was very intrigued by this and had never had one before. 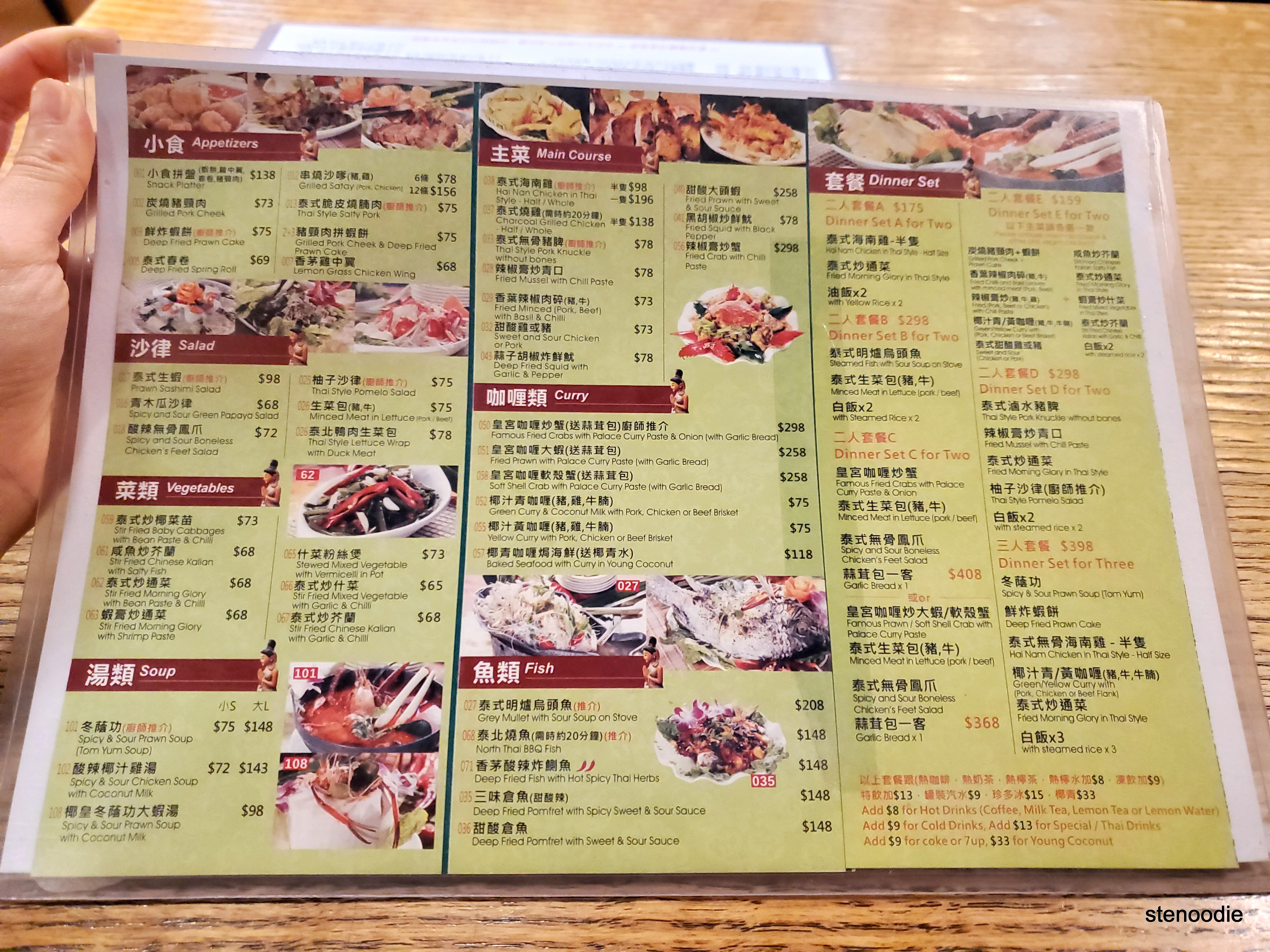 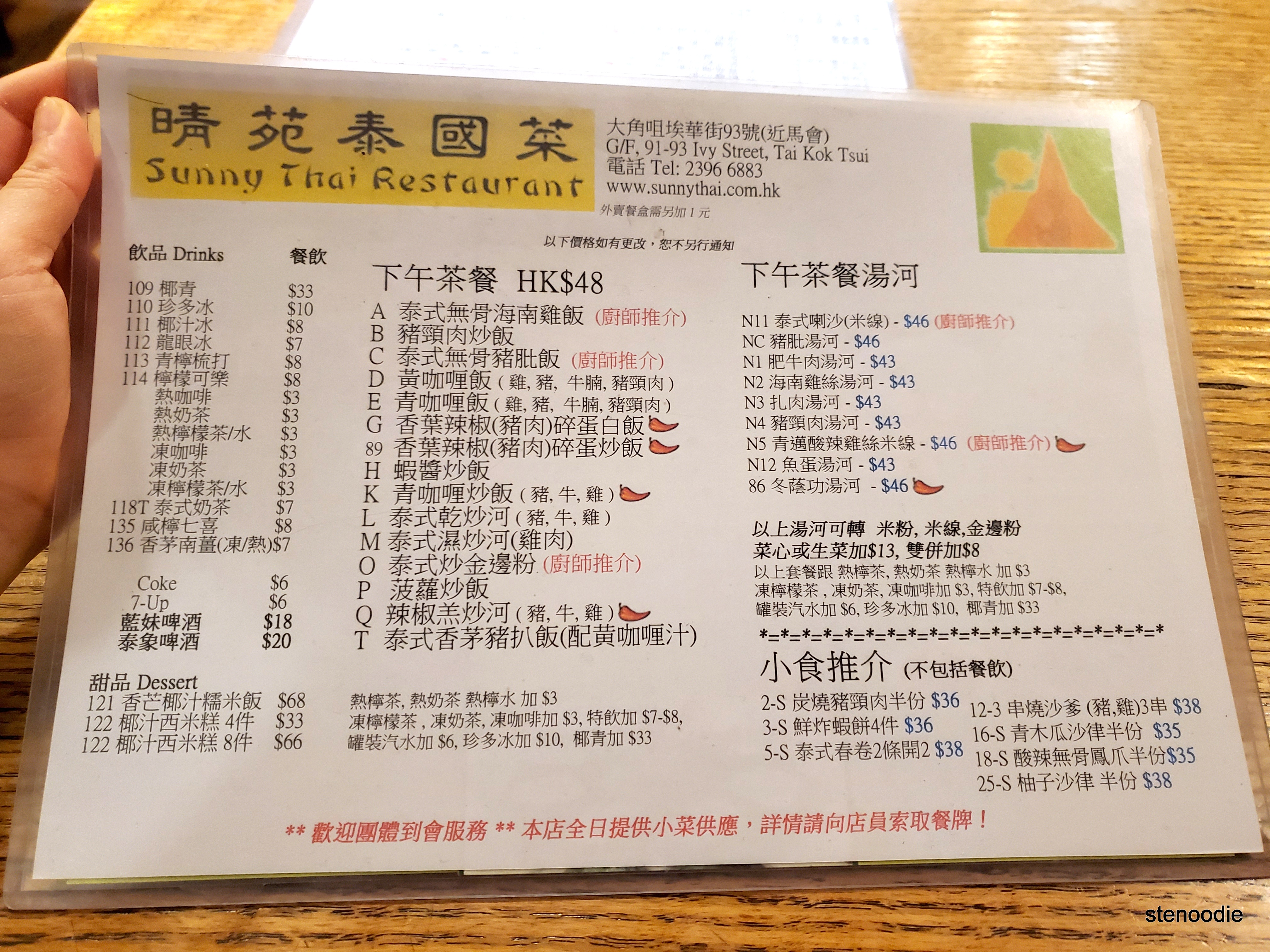 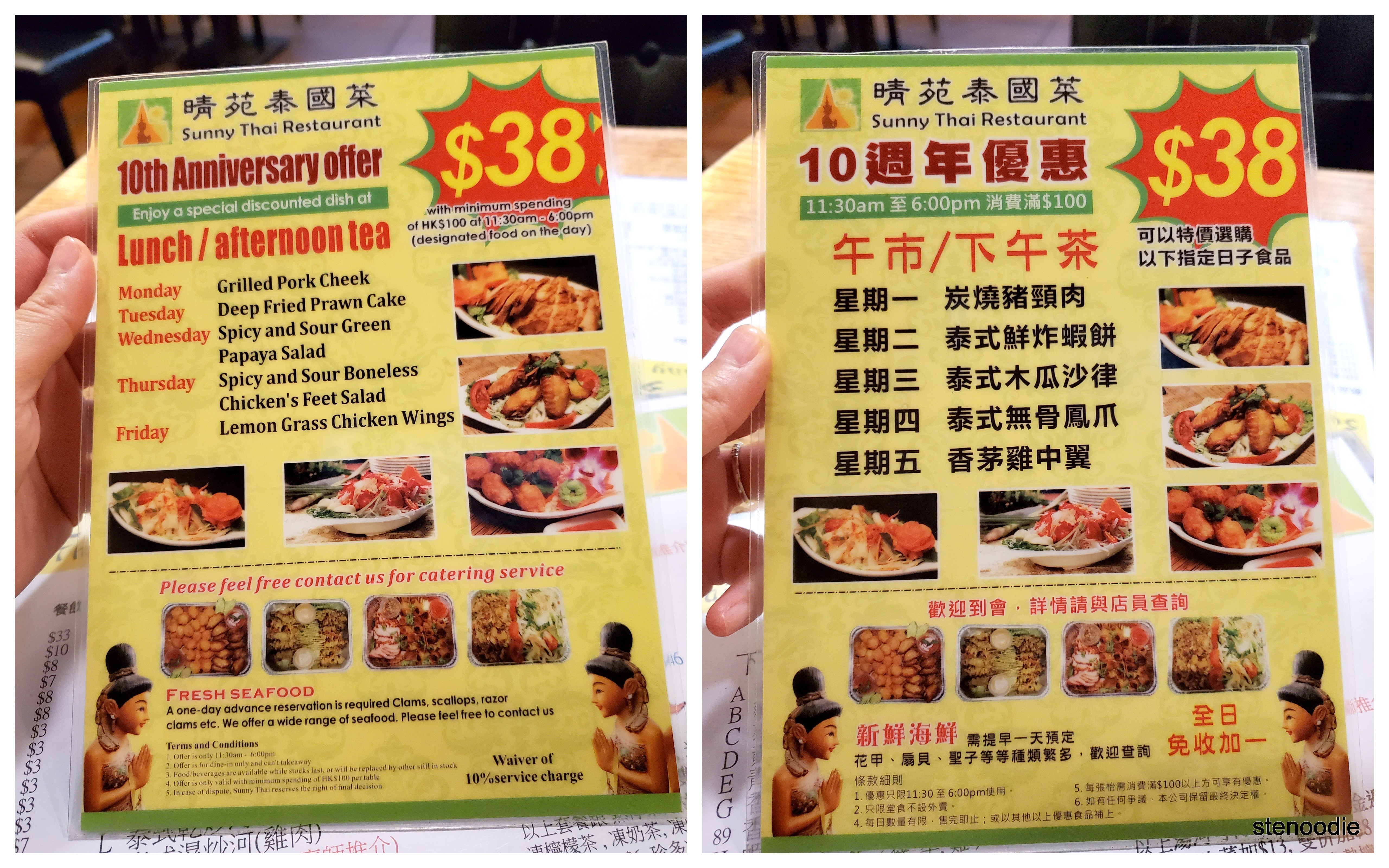 Since our order was already over 100 HKD and it was a Wednesday (they have specific specials for each day of the week), we were able to order the Boneless Chicken Salad for only 38 HKD as well.  We also ordered one item from the afternoon tea special which was the stir fry rice noodle (wet style) with chicken. 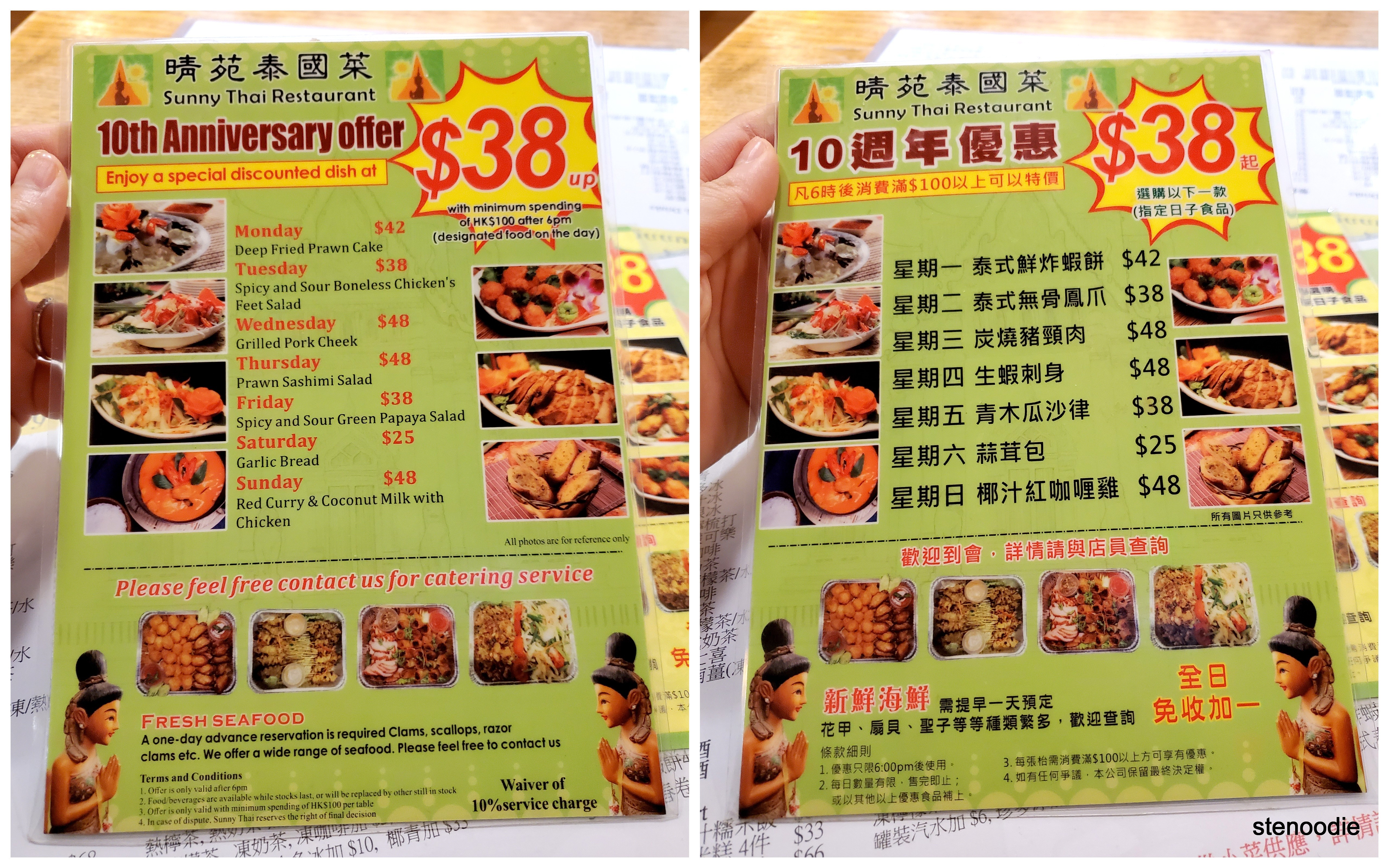 Each item only 38 HKD on certain days of the week

The restaurant was decorated with Thai influences but also very simple and a bit of “Hong Kong chic/run-downness”.  They had a big wide screen TV on the wall where we watched some old school 小丸子 (“siu yuen zi”) cartoon and the news. 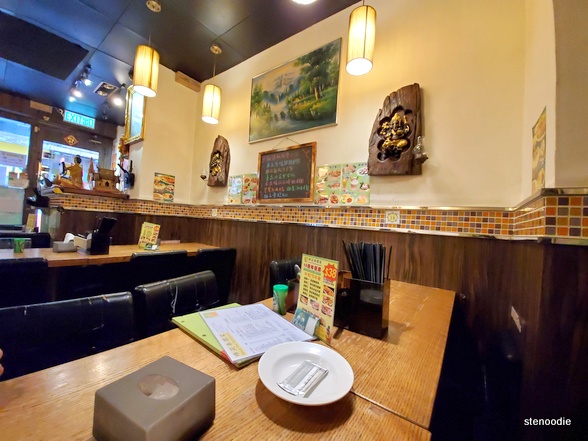 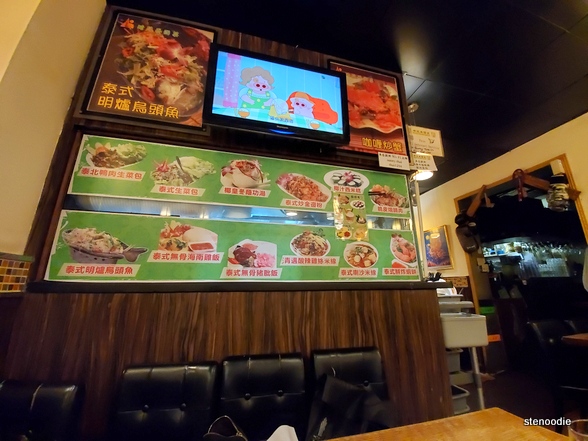 The only server working at that time was a young female who would retreat to her phone after the orders were taken care of.  She was nevertheless attentive and efficient with the service.  At the time of our meal (an awkward in-between-time for the main meals), there was understandably only one other party dining in. 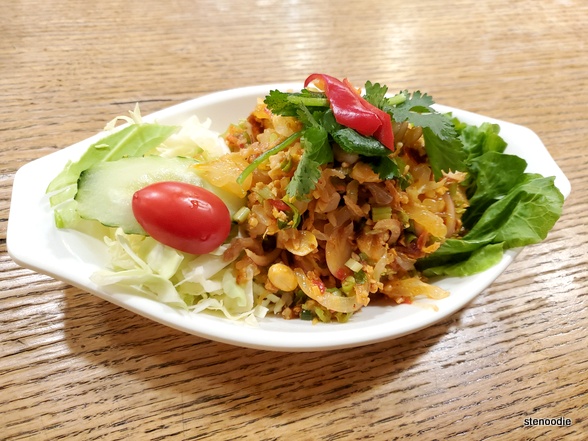 Our first dish, the Thai Style Pomelo Salad, arrived very quickly to our table.  I know it was because the dish was already previously prepared and place in their refrigerator.

Mmm, this Thai Style Pomelo Salad was so good!  The chunks of pomelo were separated from the fruit and scattered around the bowl in slivers.  There were peanuts, cilantro, green onions, red peppers, and to my surprise, two raw shrimps!  The shrimp was so fresh and delicious.  They used a kind of tangy spicy dressing all over the salad that was SO good.  It was so appetizing yet actually not spicy in a heaty way.  I was so impressed with this pomelo salad. 😀 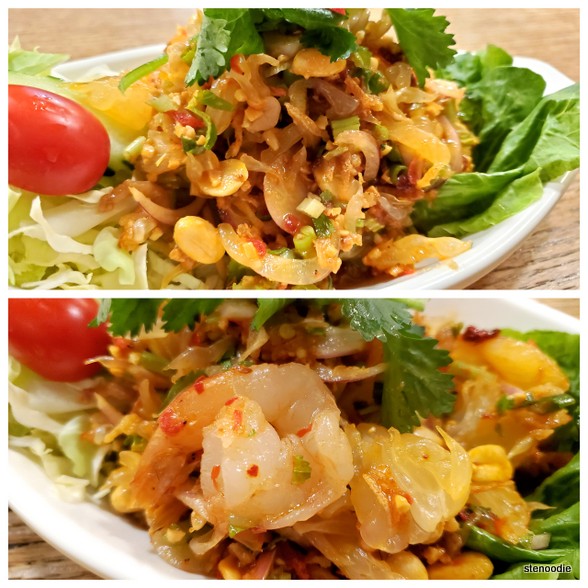 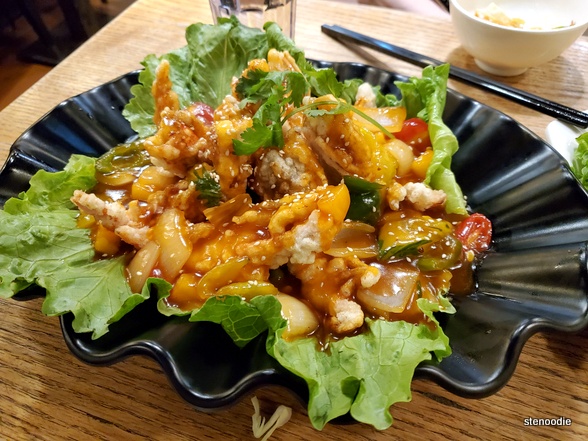 The Fried Prawn with Sweet and Sour Sauce dish contained six big prawns (by our count) in a thick sauce with assorted onions, green peppers, pineapple, and zucchini.  The prawns were fried in a thick batter.  The meat of the prawns was easy to get out and quite juicy.  Nothing really beats the taste of steamed seafood though but the prawns here were pretty good.  I liked the softly cooked onions and zucchini.  This was served in a really big dish with lettuce leaves on the bottom of the dish. 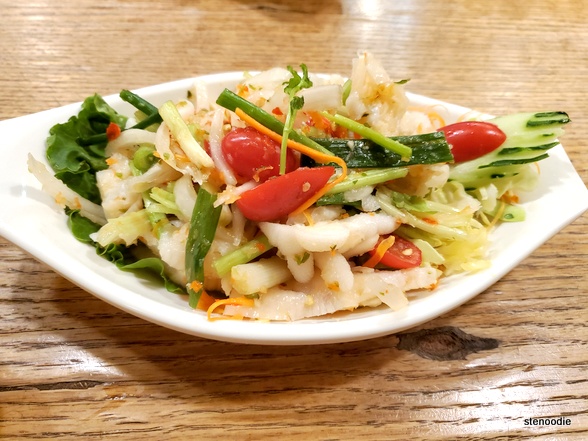 Spicy and Sour Boneless Chicken’s Feet Salad. 72 HKD (it was 38 HKD due to ordering over 100 HKD)

The Spicy and Sour Boneless Chicken’s Feet Salad was the special for Tuesday.  This looked similar in presentation to the Pomelo Salad.  There were halved cherry tomatoes, chives, carrots, and boneless chicken feet.  This dish was actually so much spicier and if you happened to bite into a section with similarly more red pepper, you would have to immediately drink some water or eat something carby to quell and absorb the spice.  The chicken feet itself was very smooth and bouncy.  I haven’t eaten this in a while. 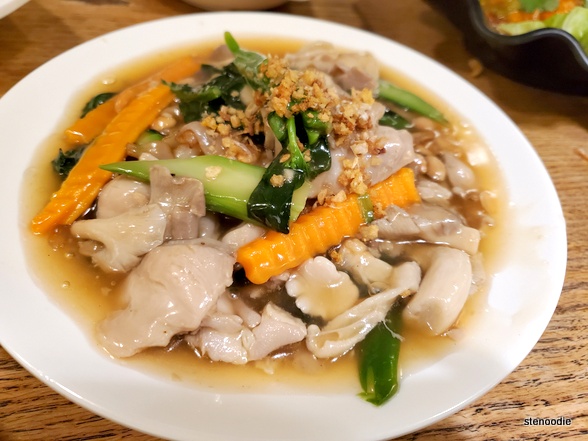 The stir fried rice noodle (wet style) with chicken wasn’t what I expected when it arrived to the table.  I was disappointed until I ate it because the taste was really good!  The rice noodles were slathered with sauce and thus made it very smooth and slippery in a good way.  The chicken was very smooth and I liked how the dish came with little beans that resembled natto beans without the slime.  I also liked that there were some chopped up gai lan to provide some vegetables to the dish.  It was a good portion too to share for exactly two people. 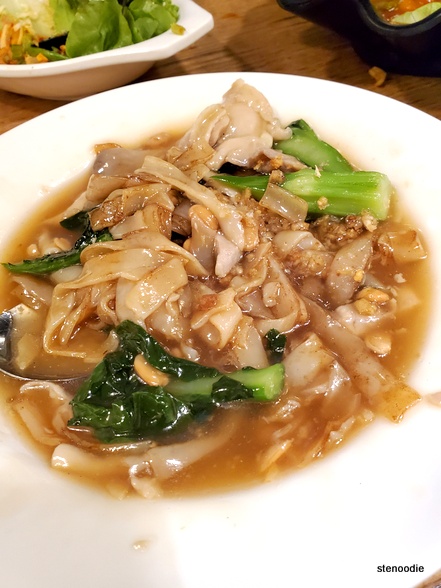 You can see the rice noodles more clearly here 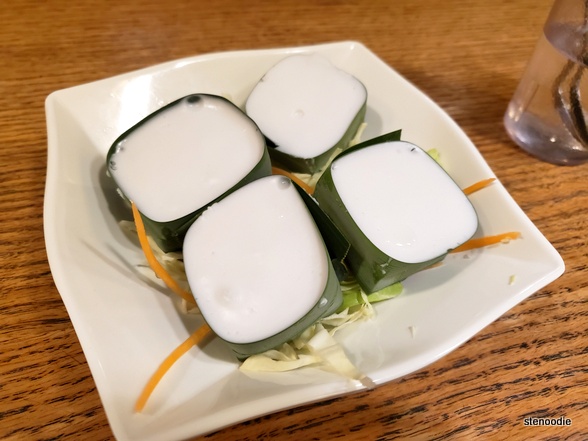 Finally, we ended our “linner” with some Thai desserts!  I haven’t eaten these Thai coconut corn and sago pudding desserts in a long time and was so happy to be able to try them.  The best part was all was how delicious they made them here at Sunny Thai Restaurant.  We ordered the dish of four for 28 HKD (you could also get eight).

The small morsels of Thai coconut corn and sago pudding were tightly wrapped with leaves.  The sweet coconut cream was on the top while the sago with bits of corn were in the bottom.  The sago was mushy and sweet while the corn provided some crunch.  It was the best dessert I have had in a long time. 😀 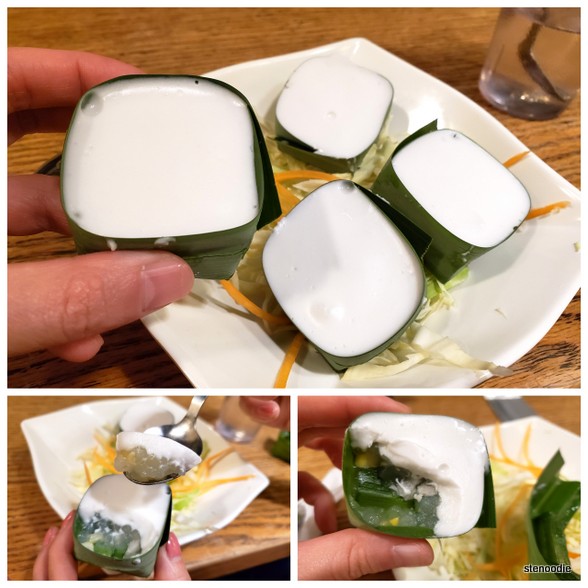 Close-ups of the Thai coconut corn and sago pudding

This was a thoroughly satisfying and good quality Thai restaurant.  I would recommend Sunny Thai Restaurant. 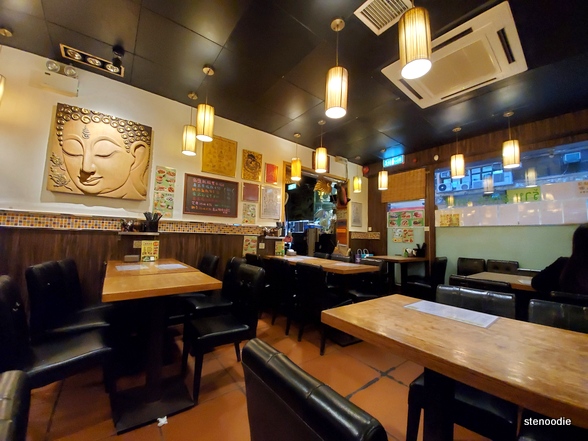 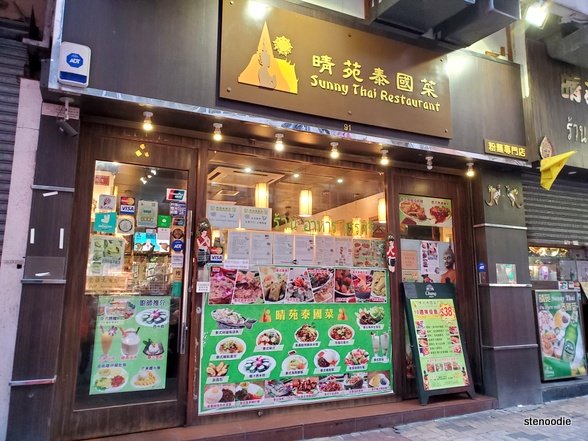