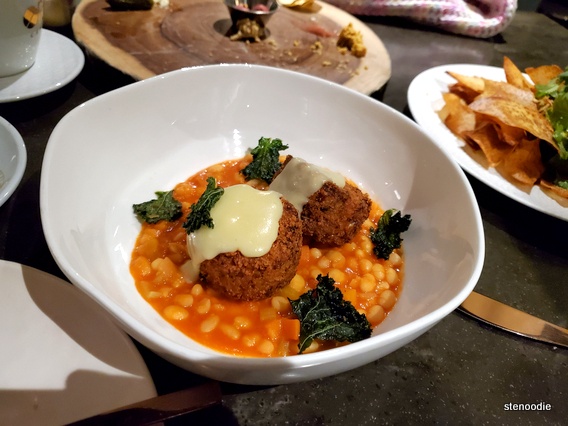 I’ve long awaited to try this vegan restaurant.  Planta has two locations, one on Queen Street in Toronto and one in swanky Yorkville in Toronto.

Ken booked a table for us at 6:30 p.m. at the Yorkville location.  I arrived slightly late and when I entered the doors, there were actually people waiting in line for a table.  The entire place was filled with patrons already dinner in, from two-person parties to four or five.  It felt like a Friday in there even though it was only the middle of the week.  The entire place was decorated like a millennial’s dream — so many cylindrical rose-coloured light fixtures, plant decor, plant wallpaper, and even two swings for you to hang out in if you were in the waiting area (actually, for photos.  OF COURSE they’re for photos!) 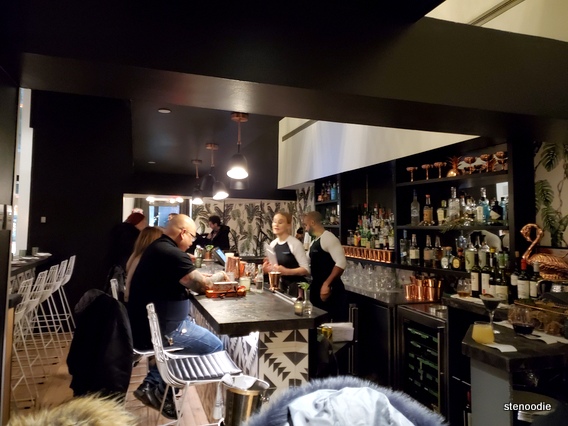 The bar was right in front of us 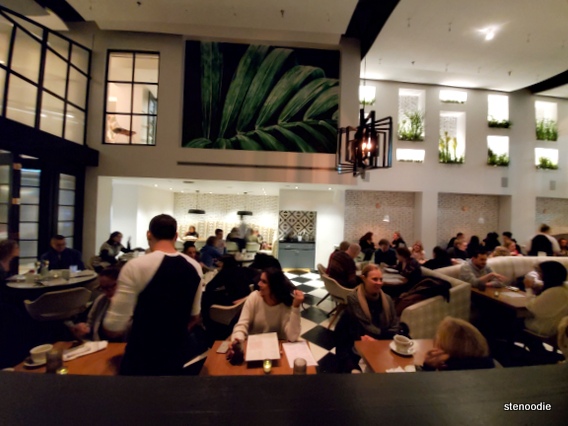 To our right, we saw the entire dining room

I had already taken a look at the menu beforehand and knew that the prices were going to be inflated.  Not only were we in a swanky neighbourhood but this was elevated vegan food. 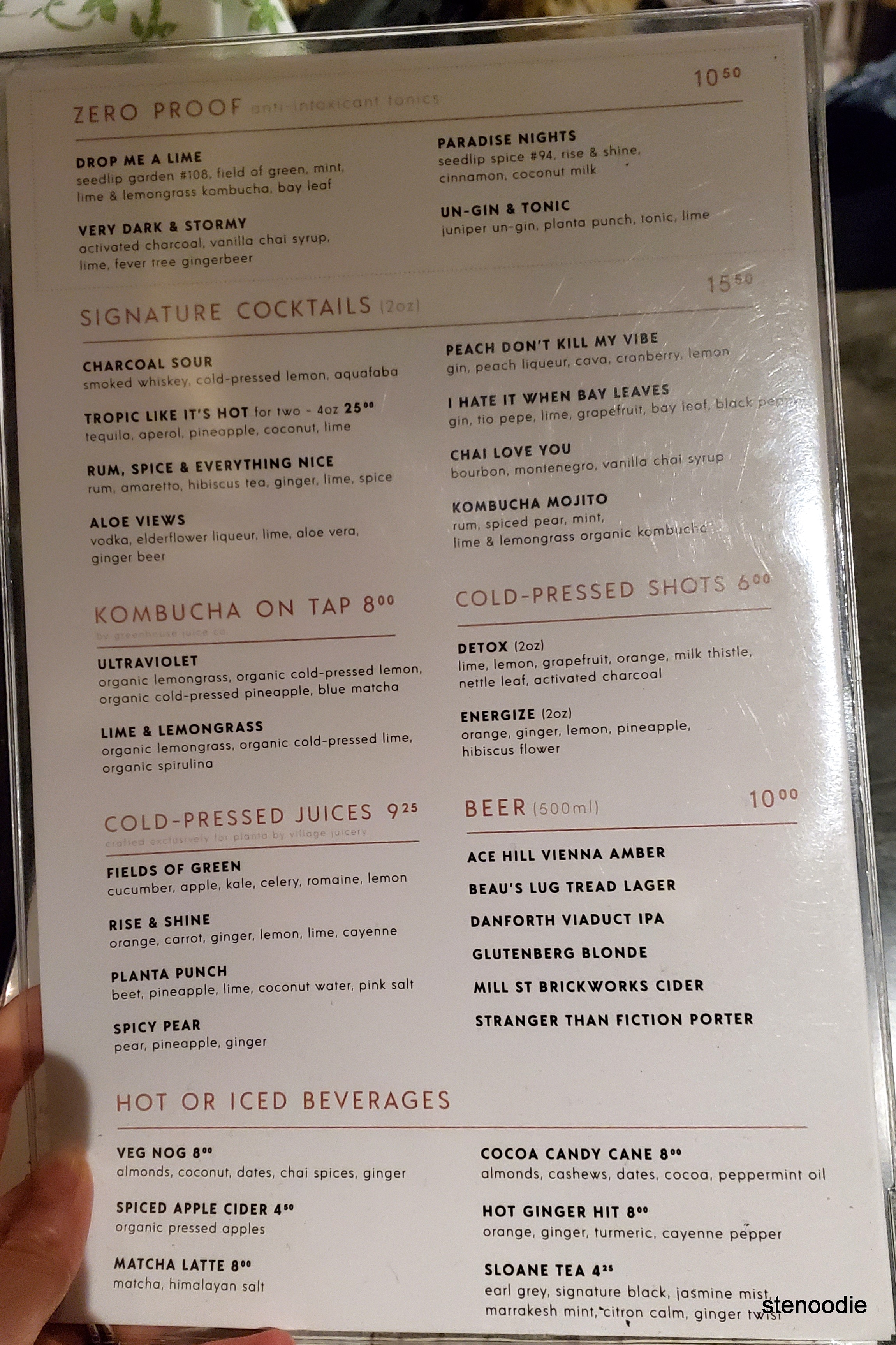 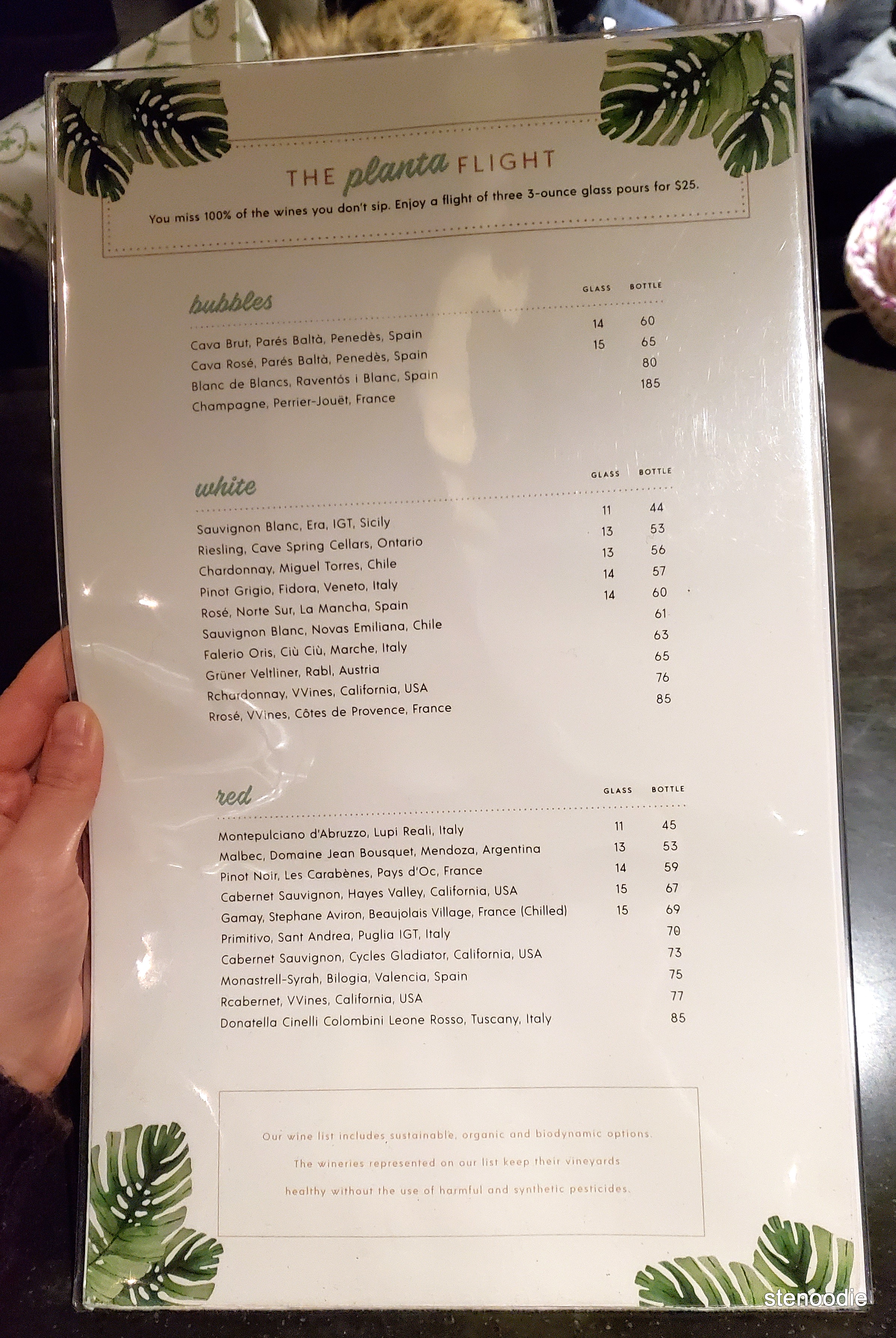 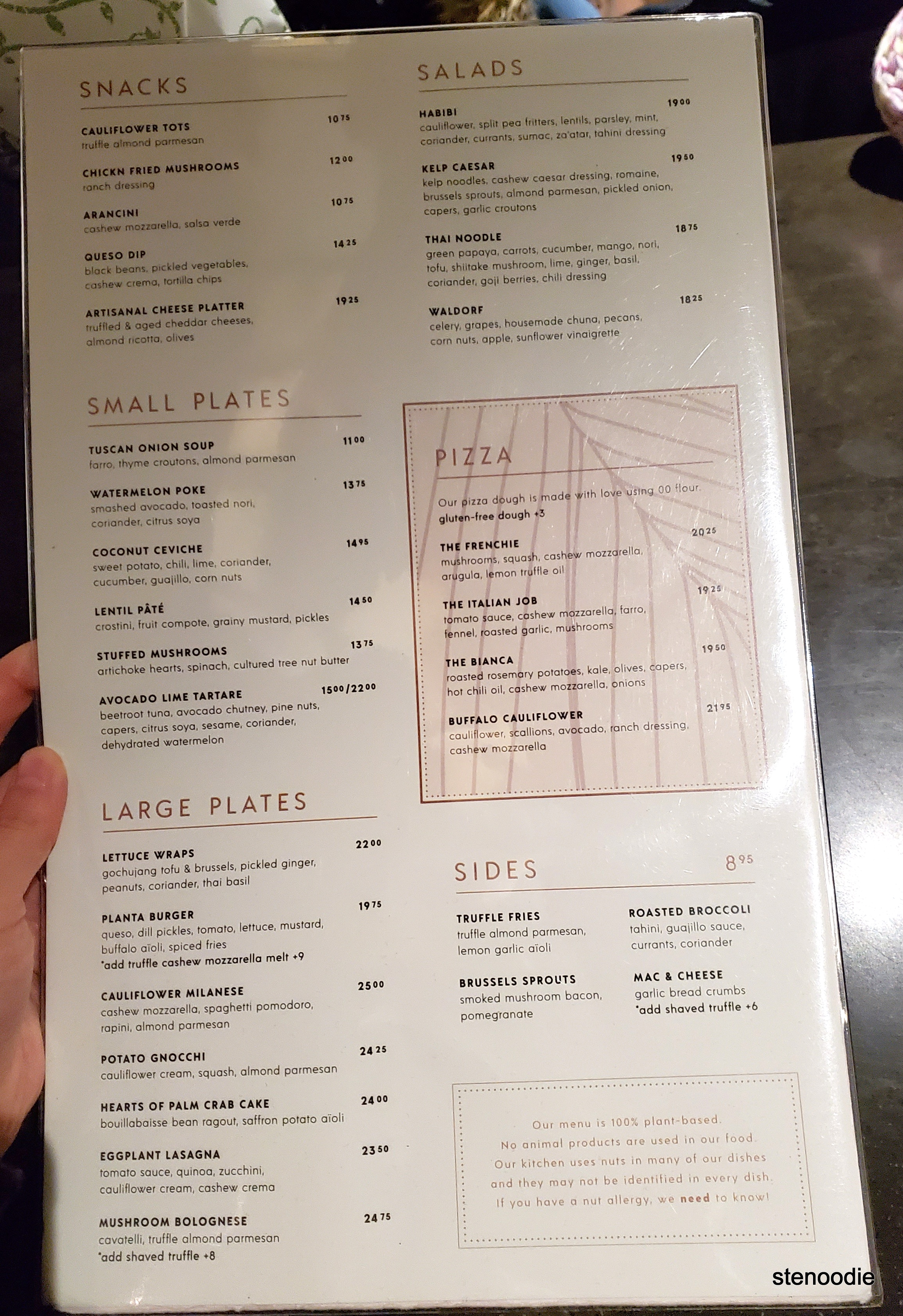 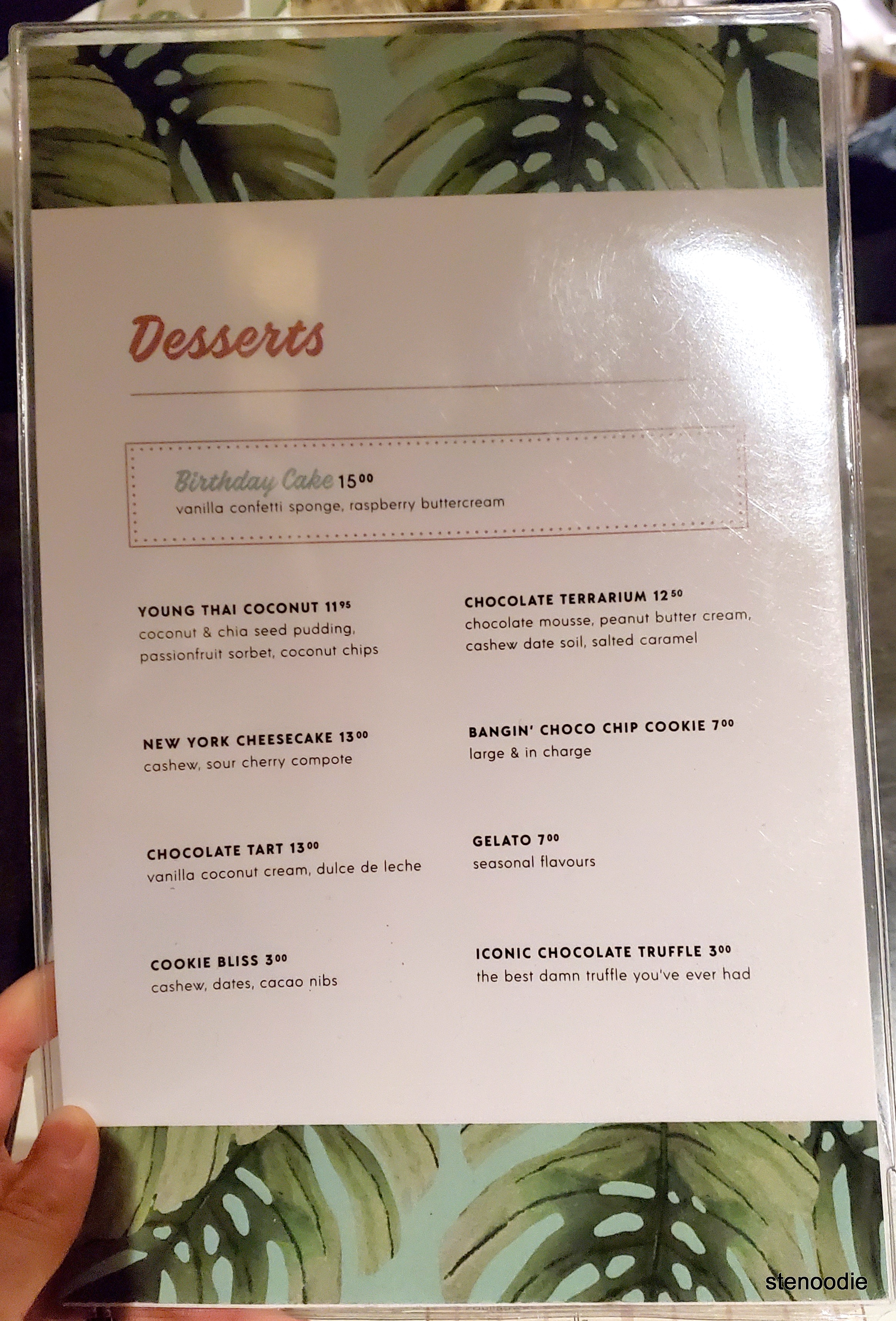 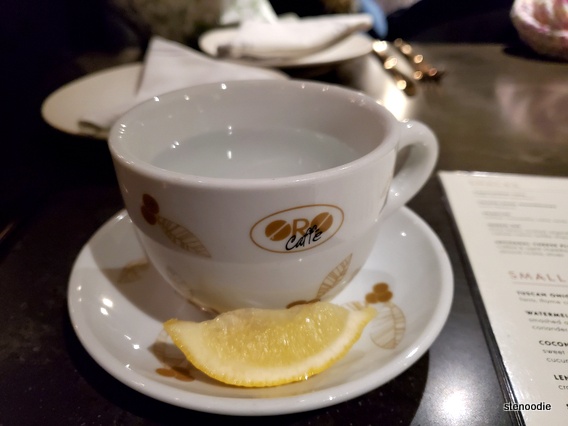 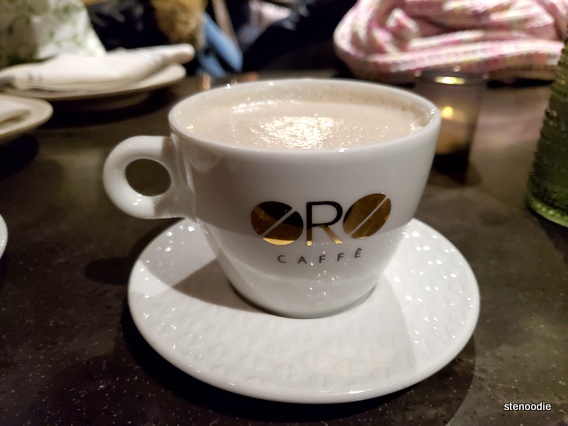 Our drinks and the cheese platter arrived first.  The Veg Nog was a hot beverage consisting of almonds, coconut, dates, chai spices, and ginger.  At $8, it is not a cheap beverage.  I had just had some almond soy drink in the afternoon and so this actually tasted very similar to it except that I could taste the spices and ginger.  It was a heart-warming drink but overpriced for sure.

The Cava Brut from Spain reminded us for our travels in Barcelona earlier this year.  The Cava was very sparkly and bubbly.  It was good and tasted “bright”. 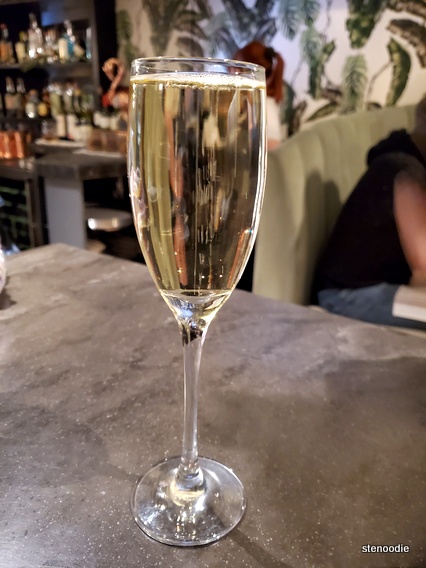 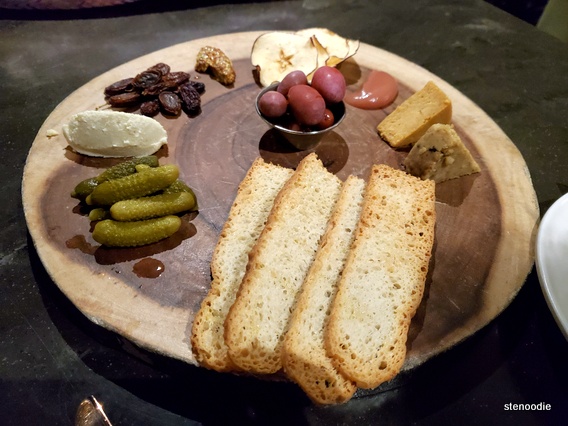 The Artisanal Cheese Platter consisted of three types of vegan cheese and a variety of fruits and vegetables with some gluten-free-tasting bread.  There was one type of cheese that was super “cheesy” and which I thought was the best tasting one — it was smoked as well.  The other two, including an almond ricotta, were more mushy and tasted more grainy and nutty (appropriate since they are made from nuts or cashews usually).  The fried apple crisps melted in our mouths and were a nice sweet snack.  The red olives were so incredibly juicy and tasty; not salty at all.  There were some sweet raisins, a dollop of sweet garnish, and baby pickles.  I wish there were more cheese on the board than the accompanying characters. 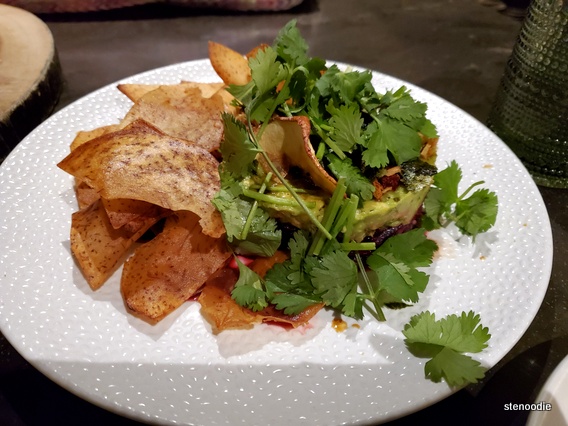 The Avocado Lime Tartare had “beetroot tuna, avocado chutney, pine nuts, capers, citrus soya, sesame, coriander, and dehydrated watermelon” — wait, really?!  I actually didn’t taste all of these ingredients when I ate this XD.  The plate was partially covered by some taro chips and the overall taste was very refreshing and tasty.  I definitely noticed the “tartare” part made with the beets and lots of avocado but barely noticed any of the other ingredients in the dish.  Still, it was all very tasty and refreshing. 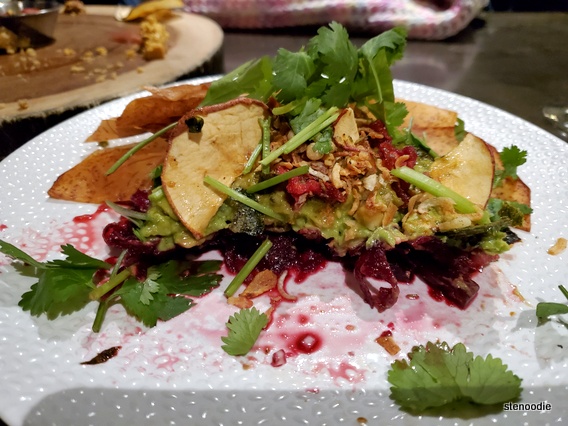 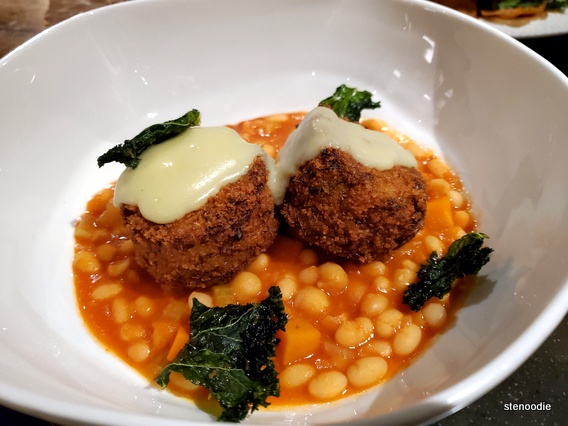 I ordered the Hearts of Palm Crab Cake under the “large plates” section of the menu.  It had a bouillabaisse, bean ragout and saffron potato aioli.  I love vegan dishes like this because the chef has to be created to use vegetables to make something like “crab cakes”.  The beans were ketchupy and contrasted well with the slightly spicy hearts of palm (essentially, it was nice to eat a bite of beans then a bit of the palm to regulate the spice).  It was well made to look like crab cakes in a bed of beans.  Overall though, we both liked the taste of the tartare dish more. 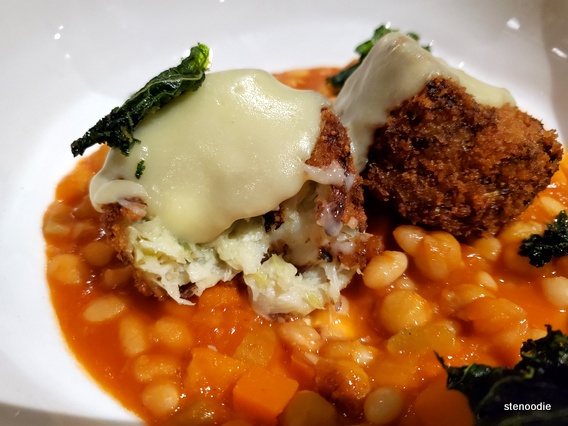 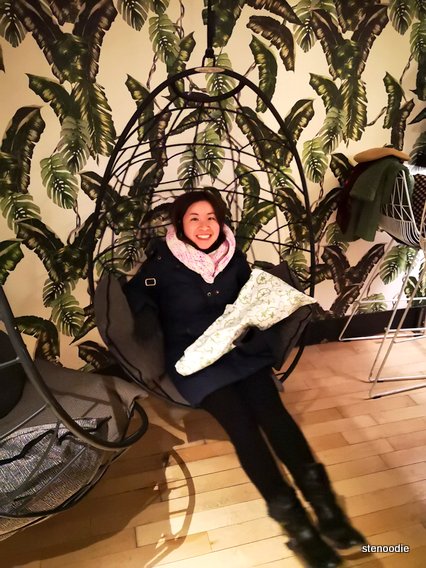 Our total for everything we ordered came up to $100 before tips.  Although I wanted to try a dessert, I didn’t want to put us over budget (their desserts weren’t absolutely enthralling either).  I’m so glad to finally have tried Planta!  It’s definitely a restaurant you won’t be coming to every night (unless you order their burger or something, which we saw plenty of people did) since the prices are not cheap.  Also, if you want to know what’s popular in terms of decor that a millennial would like, this place has it all.

Their washrooms are located upstairs, which means it’s not accessible to everyone.  The restaurant is posh but not in an uptight manner.  The service we received from the staff were good.  Planta has first, second, and third seatings available already for a new year’s eve dinner too. 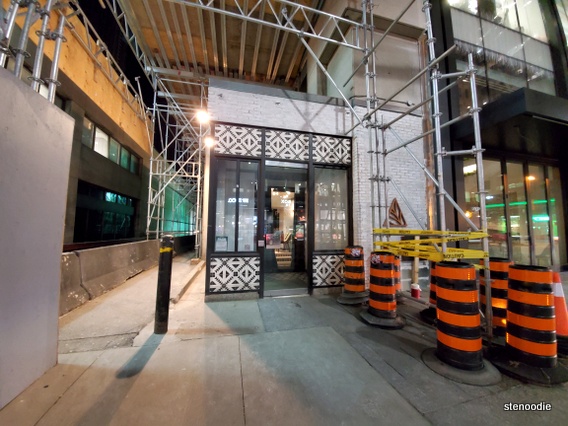 Storefront where lots of construction is going on outside