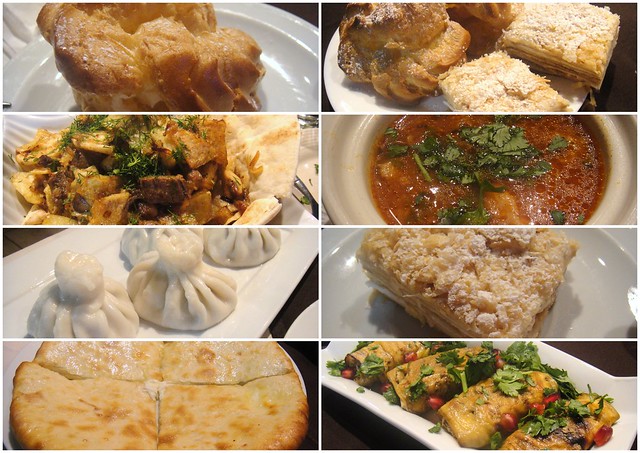 I had the pleasure of being invited to dine at Aragvi Restaurant by one of the managers.  Arik noticed that I wrote a very honest and positive review of their restaurant back when I visited Aragvi last month with my friend Jen that he wanted to show his appreciation by inviting me back to the restaurant for some food.  I was very honoured and excited!  Normally, no matter how great-tasting a restaurant is, I try not to go back because there’s just so many restaurants in Toronto that I would rather go to a new restaurant than return to a restaurant I’ve already tried.  However, with Aragvi, they have such unique and delicious choices on their menu that it is definitely worth a second look.

Mabel and I arrived on a Wednesday rainy night at 6 p.m. and were seated in the small but cozy restaurant.  I was able to meet Arik in person.  He and his staff were able to recommend us some dishes which I was gladly happy to try.

The food that I had this time was just as great as the first time’s!  We tried a lot more delicious dishes this time around and really got to taste all of the restaurant’s most popular and favourite dishes.  Here goes! 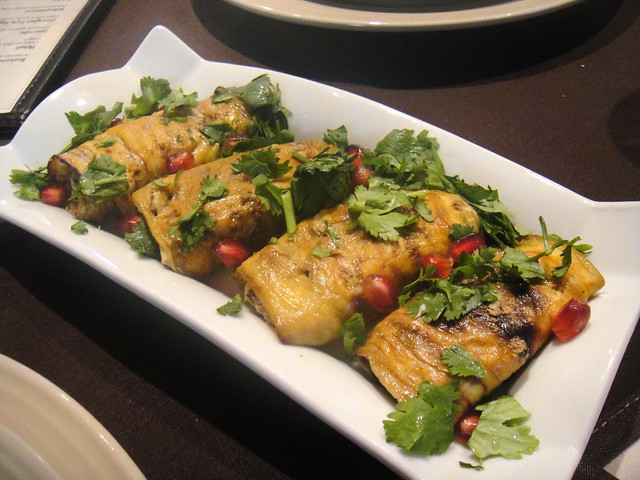 First of all, we tried the Georgian-Style Eggplant Roll.  This was a cold dish and is a great choice to share among two or four people since there are four rolls in the dish.  It was really good!  I’ve never had something where the eggplant is filled with coriander (gave it a great refreshing taste), garlic, and walnut paste.  The walnut paste reminded me of the Satsivi that I had last time (chicken in walnut sauce).  It tasted just as great!  Yummy! 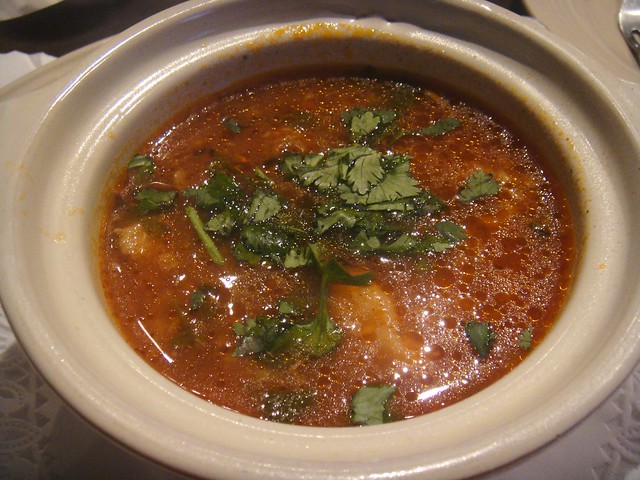 Next up, we each had a bowl of Harcho (traditional Georgian-style soup made with fresh veal, hearty tomatoes, garlic, and rice).  The fresh pieces of veal inside the soup were very tender!  I was impressed with how tender they were.  The soup itself was mainly tomato-based with a hint of spice.  I liked how there was rice inside as well.  No wonder this soup is so popular; it’s really hearty and delicious! 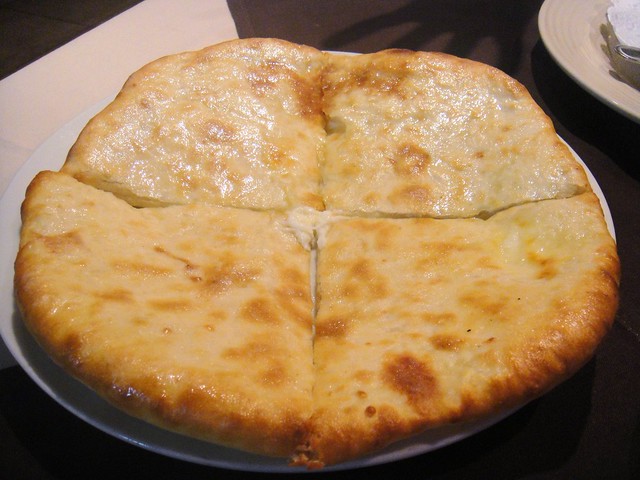 I absolutely loved the Imeretinskoe Hachapuri.  It is a cheese bread that is well known in the Georgian province of Imereti.  When it arrives at your table, the cheese bread is round and fills the surface of the plate.  It’s not until you take a piece, still steaming hot, and take a bite that you realize how special and unique the taste is.  There is gooey and soft cheese within the folds of the bread.  It is so, so delicious!  I love cheese, so this was an amazing appetizer to eat.  It’s so different than anything else I’ve had.  So impressed!! 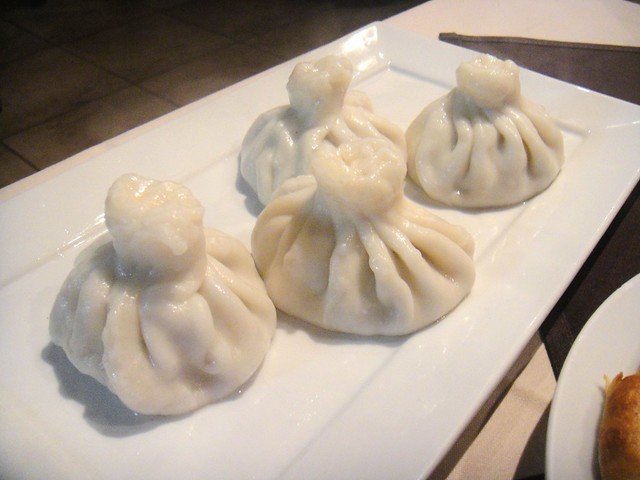 The last appetizer that we shared was the boiled Khinkali which look like dumplings but are Georgian-style perogies with minced meat inside.  We got a special lesson on how to eat these dumplings:  You take it in your hand, flip it upside down so the bottom faces the sky, and eat it quickly so that the juice from the dumpling doesn’t drip out.  I really admired how the dough of the dumpling wasn’t hard at all; it was chewy and even the little “stump” part at the top was chewy.  I liked the meat that was inside too.  This is one of their very popular appetizers!  I’m really glad that I got to try these. 😀 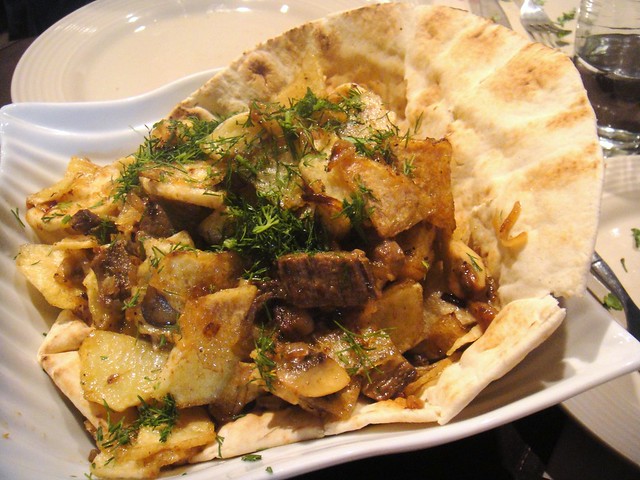 Our next dish on the table was an entrée that Arik highly recommended me to try.  It was the “Podjarka po vostochnomu” which contained fried beef filet mignon with mushrooms, onions, potatoes and served over lavash (a type of soft, thin flatbread of Armenian origin).  It was a huge bowl that was filled to the top!  The beef filet mignon pieces reminded me of the Beef Stroganoff that I had last time.  It was so tender and juicy and full of taste.  The mushrooms were delicious as well as the fried onions that were thinly sliced.  The piece of lavash was also lightly brushed with some of the sauce and was very good!  Alas, we couldn’t finish this since it was such a big portion!  I got to pack it up to enjoy later at home (and enjoy, I did!  I loved heating it up at home to savour and it was just as delicious too!)

Despite being full, we did finish off the satisfying meal with two desserts.  I am so grateful that we got this opportunity to taste so many amazing creations from Aragvi!  We tried their napoleon mini-cake and an eclair.  The portions were perfect! 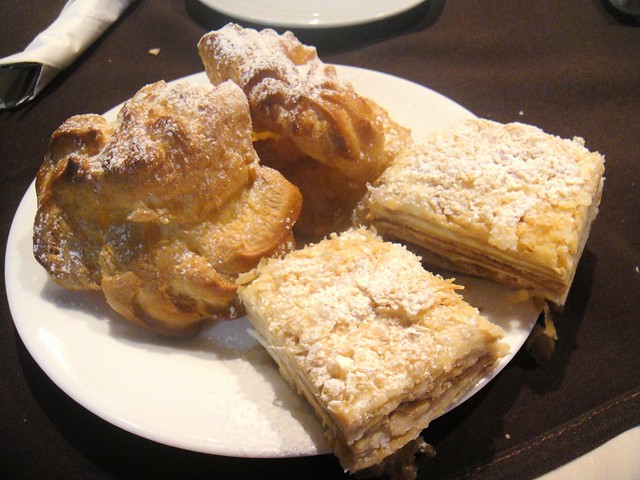 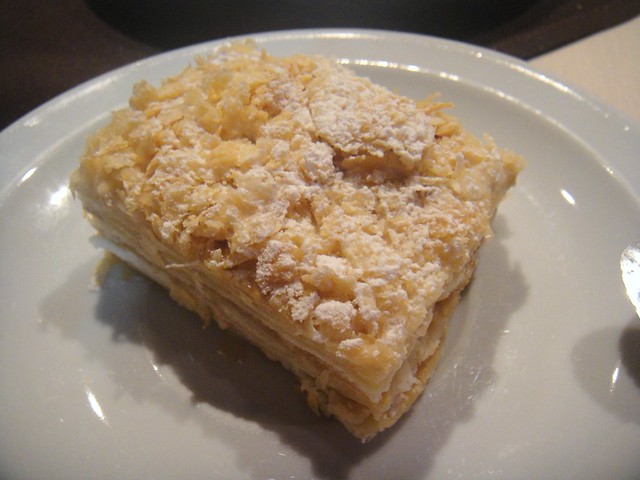 The napoleon mini-cake was so soft as I slid my fork down.  It was layers upon layers of really soft cream and pastry flakes but mixed together that made it such a soft and delicious cake.  I don’t know how else to describe it.  All the other napoleon cakes I’ve had in the past were crunchy and in large layers.  I really enjoyed this napoleon mini-cake and so did Mabel! 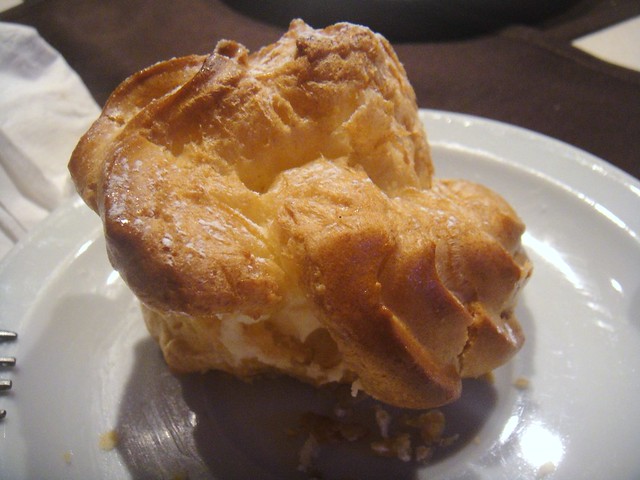 Lastly, the eclair was absolutely amazing as well.  It was a soft filling that tasted like ice cream!  It was simply cream, but the way it was cool and soft really resembled ice cream for me.  It was yummy and didn’t feel heavy either even though it was cream.

I love this restaurant and it’s quickly become one of my favourites!  It turns out that I really adore Russian and Georgian food!  I’m actually excited to return again to try the rest of what Aragvi has to offer.  And guess what?  You get a chance to try this restaurant out too!  Stenoodie is launching their first contest here and two lucky individuals will get to win a 20% discount card to Aragvi.  Who wants to go?  Who wants to try out this amazing restaurant?  Tune in TOMORROW (May 20, 2014) to see how to enter my contest for a chance to dine at Aragvi!

FTC Disclaimer:  Although Aragvi reached out and invited me to a complimentary tasting to review their restaurant, the opinions expressed here represent my own and not those of the restaurant.