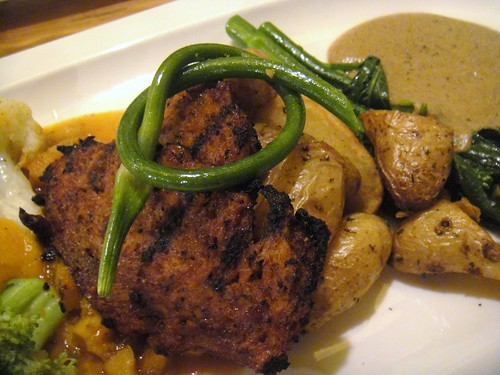 This is the first time that I’ve had vegan food at a western restaurant.  By vegan food, I mean that the restaurant actually makes mock meat, also known as seitan.  I was happily surprised to see Grasslands on this year’s summerlicious roster and was eager to try it out.  When I called to make the reservation, I was informed that the 6 p.m. first seating was already full and that we had to take the 8:30 p.m. second seating.  This was fine with us. 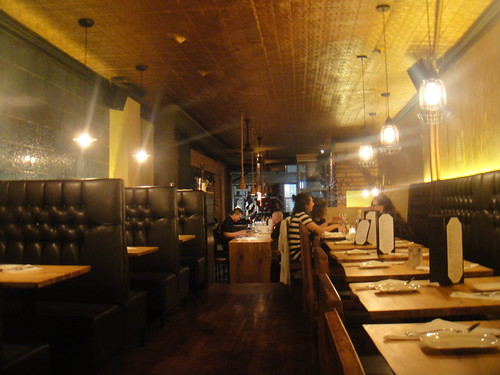 This place was packed when we arrived but dwindled down to this view as we finally finished eating at 11 p.m.

When we got there on a Tuesday night, the place was packed and we had to sit at the bar to wait a while before we were called to our tables.  Good thing we made reservations!

I love dining out with Priscilla because she is such an adventurous foodie like me.  She’ll try anything once and is willing to share the plates with me.  She’s also a slow eater like me so I didn’t have to feel like I was shoving food down my throat.  😀 I really enjoyed the entire night and the really friendly and accommodating server made the night wonderful as well.

We shared all the courses of food on the prix fixe meal which was great! 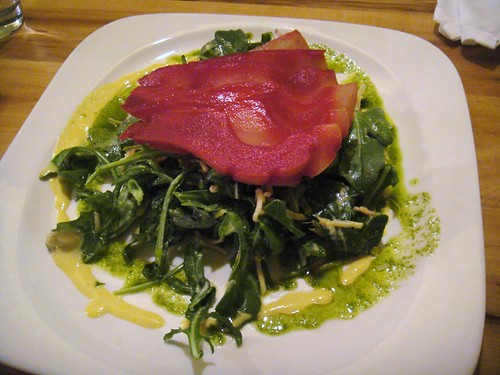 The first appetizers we got were the Crispy Kings and the Root Slaw.

The Root Slaw was huge!  It was a big plate of salad that was big enough to even be a main course in some restaurants.  It contained large slices of shaved pear with parsnip, radish, carrot, and baby arugula tossed in a ginger dressing.  We were both at first puzzled by what the red slices were and then when we tasted it, it was pear.  It threw us off because the pieces were red and pears aren’t usually red….  Either way, we both enjoyed the shaved pears because they were refreshing and juicy.  The arugula were okay-tasting and the ginger dressing wasn’t as creamy as it had been advertised to be. 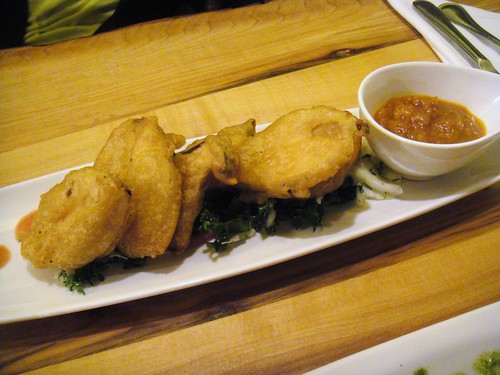 Next up, we had our Grilled Seitan Steak and Burger Board. 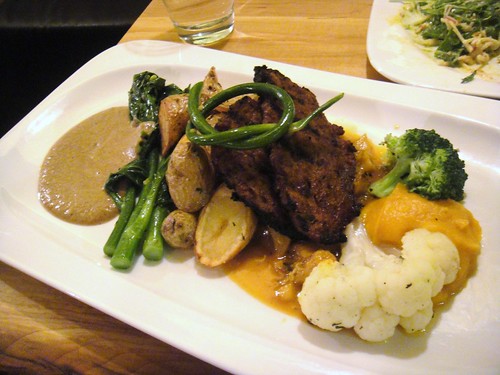 We were both very interested in the Grilled Seitan Steak.  It came really nicely plated with lots of colours due to the grilled Niagara peach salsa, thyme roasted fingerling potatoes, garlicky gui-lan, maple scented yam mash, and mushroom red wine reduction all laid out on the plate.  There were two pieces of steak which made it easy to share.

Unfortunately, the seitan steak was grilled a bit too much and much of the sides were charred.  The seitan steak tasted rubbery and had a hint of a texture like real steak.  This tasted okay as we’ve both had better seitan before.  I really loved the maple scented yam mash — it was so sweet and so smooth!  The grilled Niagara peach salsa again threw us off and made us think it was pears again.  I loved the roasted fingerling potatoes (usually I don’t like potatoes but these were so small and tasted great).  I also loved the mushroom red mine reduction that I dipped the potatoes in.  It was so tasty! 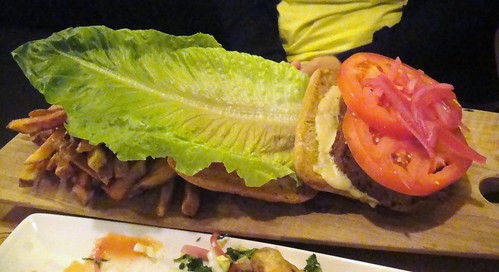 The Burger Board was served open-faced

The Burger Board was also arranged in an impressive manner.  We kindly asked our server to cut the burger in half for us and he brought it to the kitchen who cut it cleanly for us to share.  We were both really impressed with the house-made seitan and black bean patty that came with avocado, tomato, pickled onion, spicy ketchup, and maple Dijon mustard on a toasted bun.  The seitan and black bean patty tasted like flavoured meat but had a hint of a texture like tofu.  The avocado had a strong lemon aftertaste to it when left on the board for too long but otherwise was smooth.  I really enjoyed this black bean patty seitan burger! 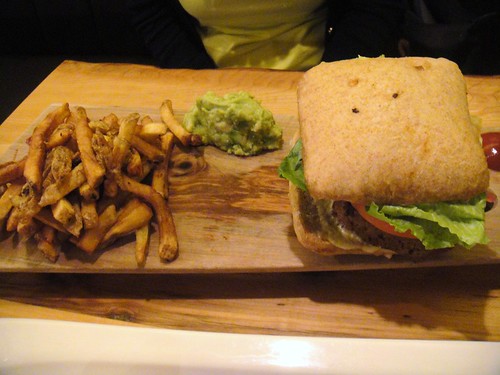 At this point, we were already really full.  There was so much food and even the appetizers filled us up halfway because of that big shaved pear salad.

Our desserts were the Chocolate Bundt and Sticky Toffee Pudding. 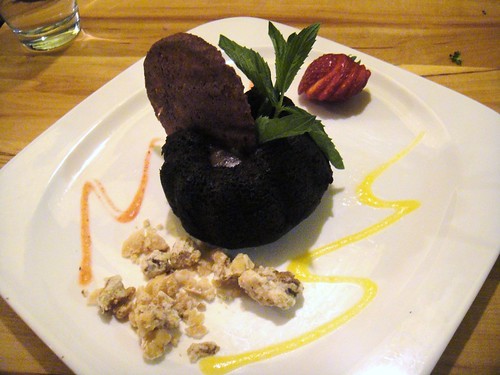 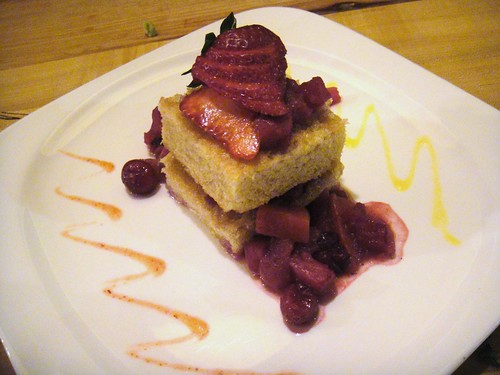 The Vanilla Cake was a lightly scented vanilla sponge cake with fresh fruit compot and maple almond tuile (it’s different from the online menu which originally showed a Sticky Toffee Pudding).  This one contained further pieces of questionable fruit that we both couldn’t figure out.  It was red yet tasted like pears?  We asked the server who kindly informed us that these were actually pineapples although they switch the ingredients to cranberries sometimes.  We believed that the pineapples were dyed with beet juice in order to get that red colour.

Here’s a picture of the Summerlicious menu at Grasslands. I like how they put “g”, “w”, or “n” next to the dishes so that you know which ones are gluten free, wheat free, or nut free respectively.

Both plates of dessert came with a fresh strawberry which was meticulously sliced up.  It was the softest strawberry I’ve ever had!

As I walked out of the restaurant, I felt so, so full!  I forgot to bring my digestive enzymes with me as this would have been a perfect night to help my stomach juices flow more.  I was content and impressed with Grasslands and understand why it’s so popular now with such a full house.  I would suggest that you try out Grasslands in the future too if you’re up for some vegetarian food (I did check out the regular menu and they have regular meat dishes as well!)