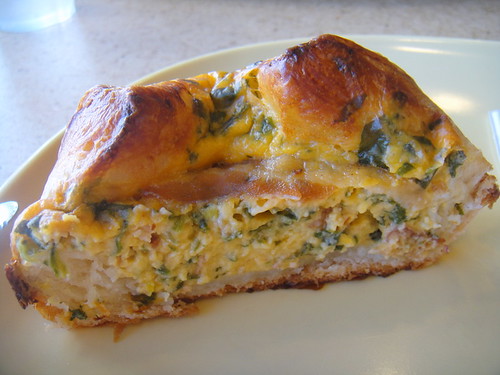 I love being able to have breakfasts with friends whenever I want!  That’s the perk of owning your own business and/or working as a court reporter.  Cynthia and I enjoyed a casual and relaxing breakfast at Panera Bread (Hwy 7 and Warden location) which is close to a Whole Foods supermarket.  It was Cynthia’s first time eating at Panera after loving the treats she tried at the bread and pastry fair over the weekend.  It was my fifth time dining at Panera after having ate at their Ryerson and Richmond Hill locations.  :3

The best thing about franchises is that no matter where you go, all the branches look the same.  The decor and furniture are the same, the menu is the same, and the service is the same. 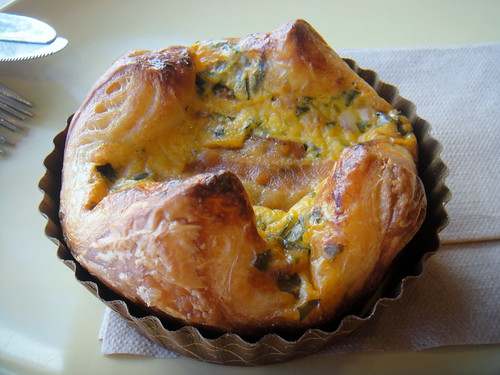 Spinach & Bacon Baked Egg Soufflé. $4.49
-freshly baked soufflé made with our savory egg mixture, spinach, cheddar cheese and bacon, and flavored with a dash of Tabasco, a hint of garlic and a squeeze of lemon juice

Cynthia talked about trying a souffle at Panera and it was unfortunate that out of the three options (four cheese, spinach and artichoke, and spinach and bacon) that they only had the spinach and bacon soufflé left that morning.  We shared it. 🙂

I think this was my first time trying a soufflé and I think it resembles a quiche.  The top of it wasn’t very fluffy but the inside was pretty good with egg, spinach, and bacon bits.

I also ordered a turkey sausage egg, tomato, and spinach breakfast sandwich from the breakfast menu.  We placed our orders at 10:35 which was just enough to order breakfast.  They were in the process of flipping over the signs to the lunch ones. 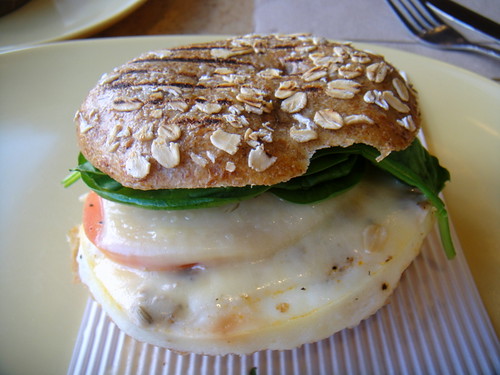 This sandwich was much smaller than I thought.  It was very healthy though!  I liked the texture of the turkey inside the egg, but other than that, it’s not terribly tasty. 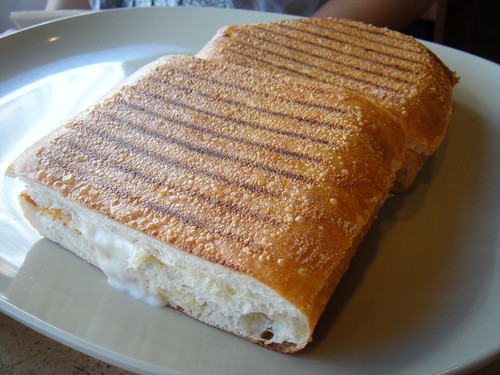 Cynthia had ordered the tomato and mozzarella panini before and loved it, so she ordered it again.  I’m going to keep this sandwich in mind and order it in the future.

Thanks for another good meal in a casual environment, Panera Bread! 🙂