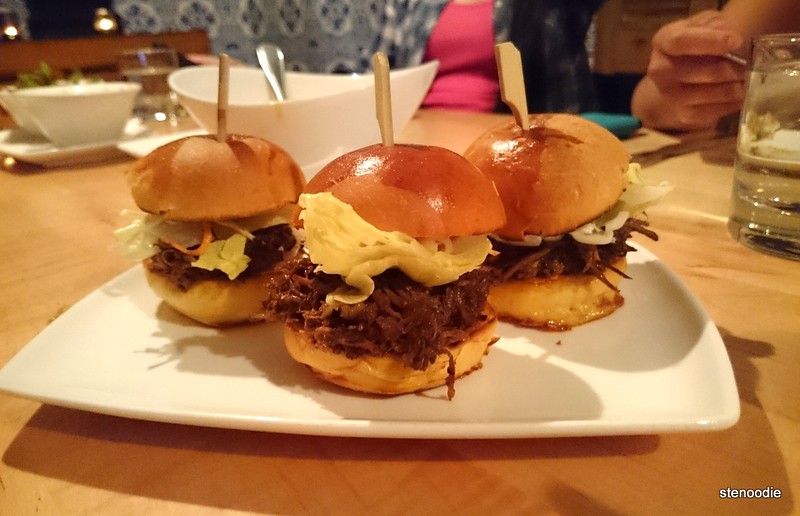 Located at 94 Ossington Avenue in Toronto

It’s been a while since I did a food blog post.  Uh oh!  Why!?!  It’s been very busy this month so I took a little bit of a breather but I miss blogging and I’m starting to backlog on the restaurant posts, so I’m back.  Hi guys! 🙂

About two weeks ago, we celebrated Jessica’s birthday at Soos, a Malaysian restaurant that specializes in reimagining street food, located on Ossington in downtown Toronto.  I had never heard of this place!  Soos is an interesting name.  There were 7 of us and Victor had booked the restaurant in advance so that we could get there by 6:30 p.m. and had the private dining room too. 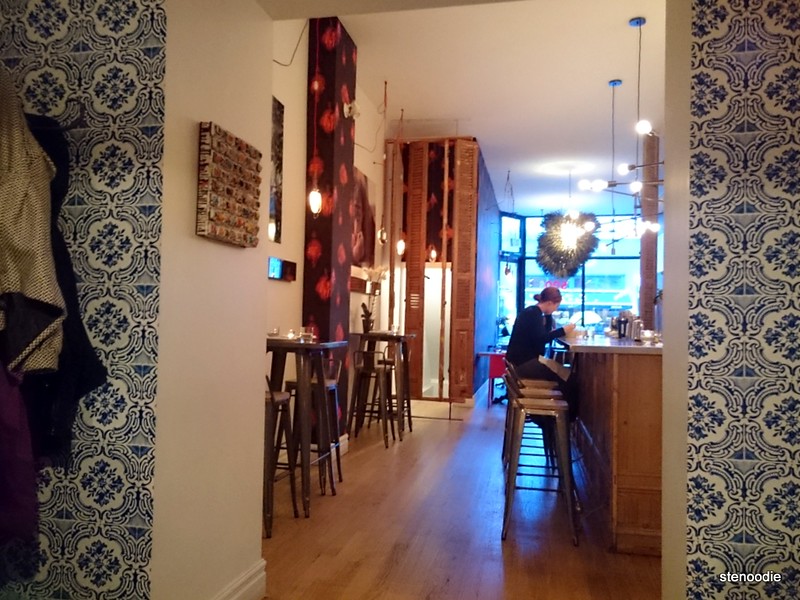 We were the first to get there on a Saturday evening 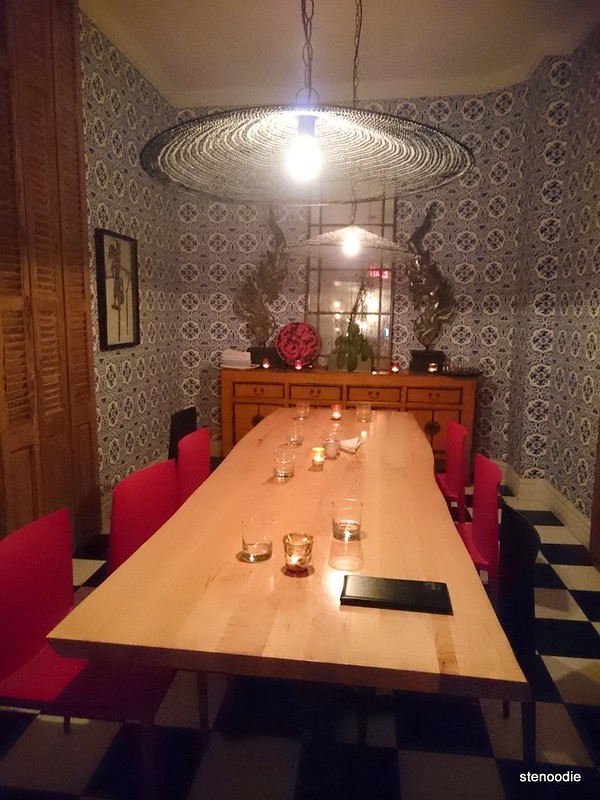 Soos has a really nice interior design and the private dining room was so nice!  We had booked for the $35 sharing menu in which 8 dishes were included and we would be able to share and enjoy a little bit of each of the restaurant’s offerings.  I was excited! 😀 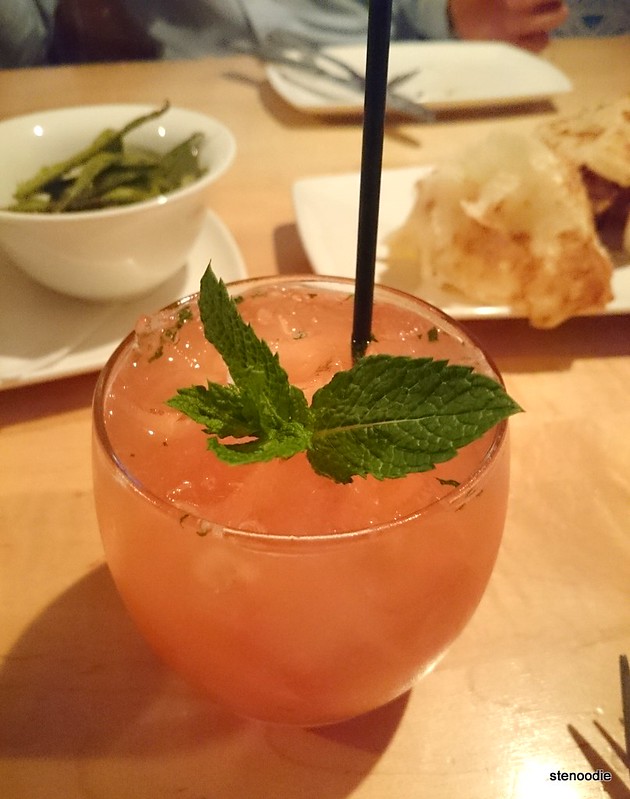 Once we all got seated, we ordered our drinks and the food started arriving.  To indulge in the night’s festivities, I ordered a drink to join in with the rest of the party and I was intrigued with something that they had called a teapot shot (more on this later).  I ordered a drink called Strawberry Smash which had lemongrass vodka, strawberry jam (interesting!), mint, and citrus bitters in it.

It actually wasn’t strong at all and there wasn’t too much of a strawberry jam taste in it even though that was what intrigued me about the drink.  I tried Jessica’s drink and actually really liked hers! 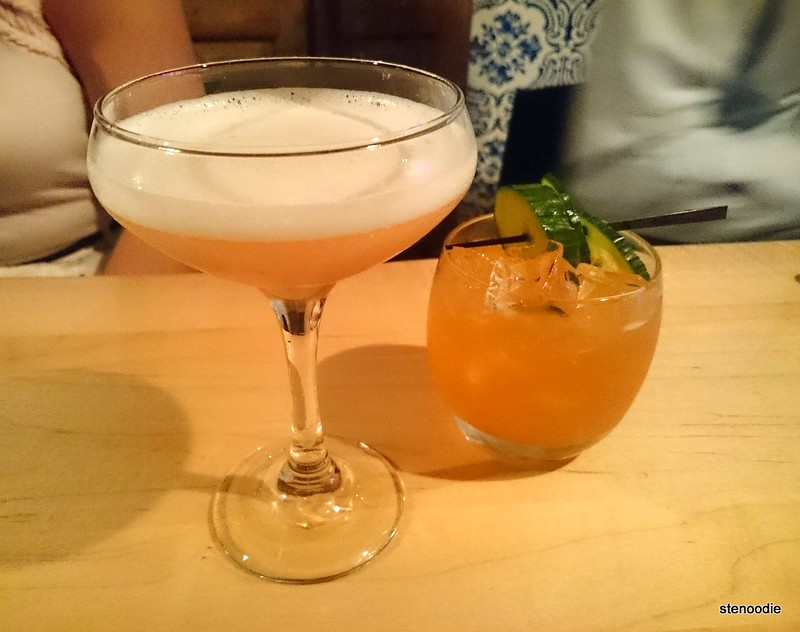 Before long, the food arrived.  I was so impressed with how fast all the 8 dishes arrived that night.  We really didn’t have to wait long between each dish and the service was impeccable — probably because we were in the private dining room. 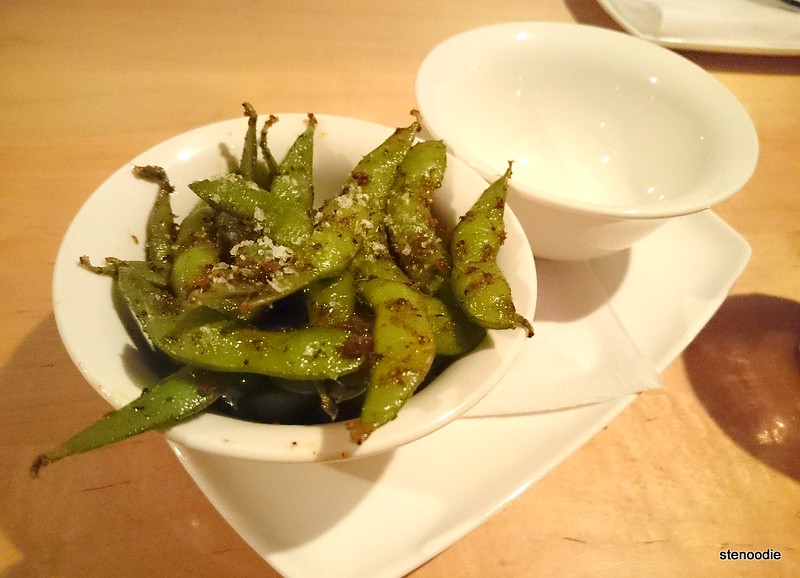 The first dish was the Sambal Edamame.  This was a small dish of edamame where it was covered heavily with maldon sea salt and sambal belacan.  It was actually a very nice dish and the belacan was uniquely spicy.  After a few, you don’t feel that it’s as salty and you can continue eating it.  This is an appetizer that you can’t stop eating because it is so good. 🙂

Up next, we had the Pulled Chicken Kapitan Tacos with napa & carrot slaw and kaffir lime tzatiziki.  These were nice portions of tacos and the chicken was covered with delicious tzatiziki.  It was very good! 😀  I liked how the taco skin was soft yet held everything together. 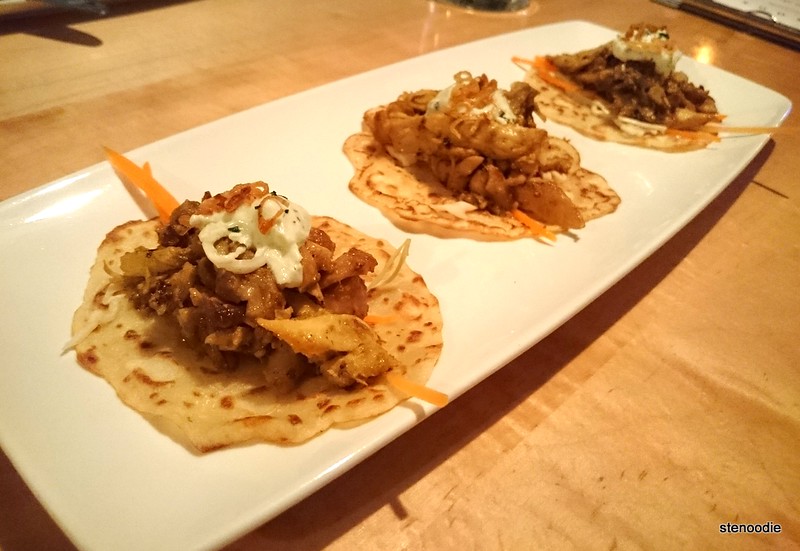 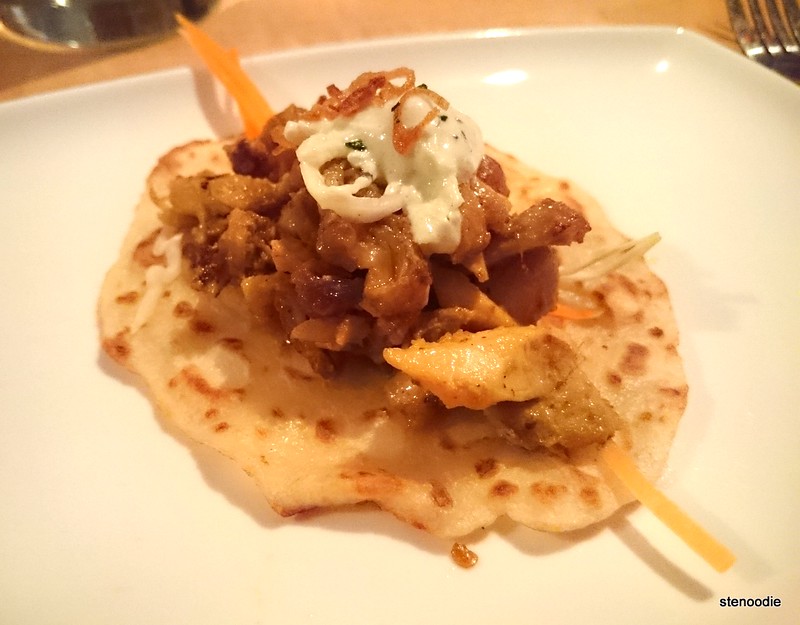 The Dhal & Roti was delicious!!  The roti was so soft and well made and the curry was delicious.  I wish there had been more of the curry to dip the roti in. 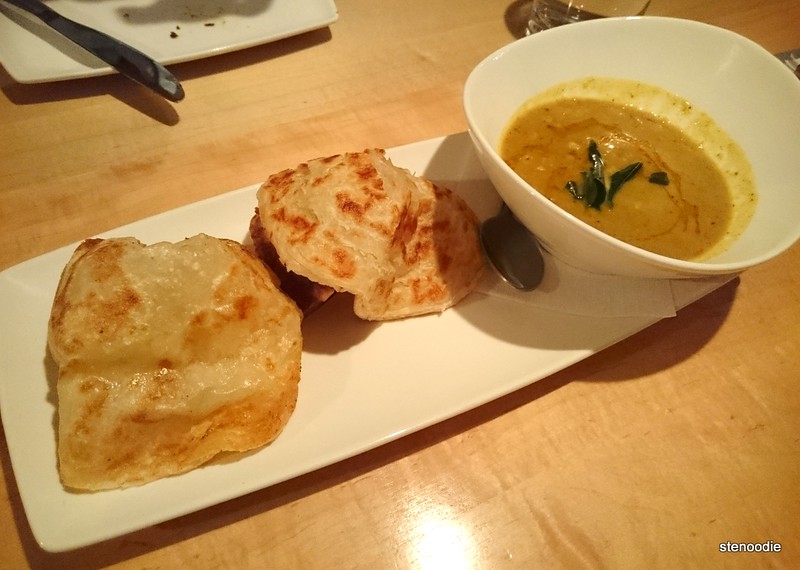 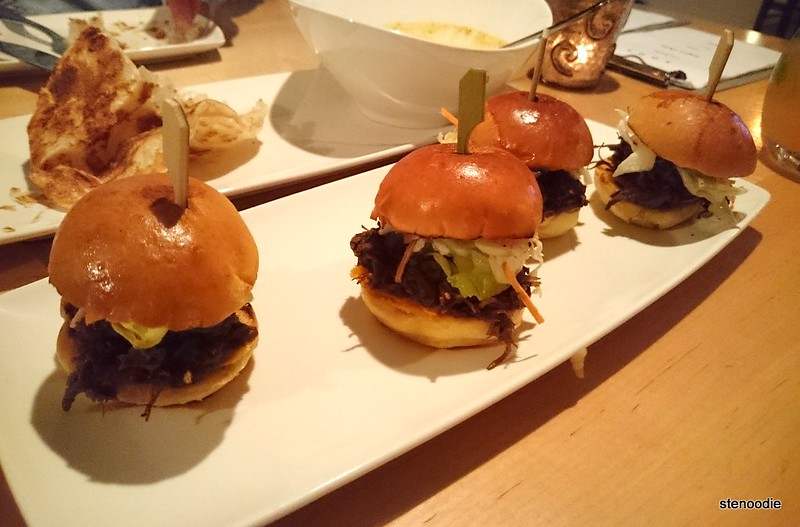 The Spicy Beef Brisket Sliders included white cheddar, pickled chili, and creamy cabbage.  These were so cute!!  They were perfect to hold in your hand just like the tacos.  It actually wasn’t too spicy and I really liked the soft bun and how it held everything together.  By this point, we were getting a little curious as to how the rest of the night would unfold.  We had already three dishes out but weren’t feeling full yet.  Hmm… 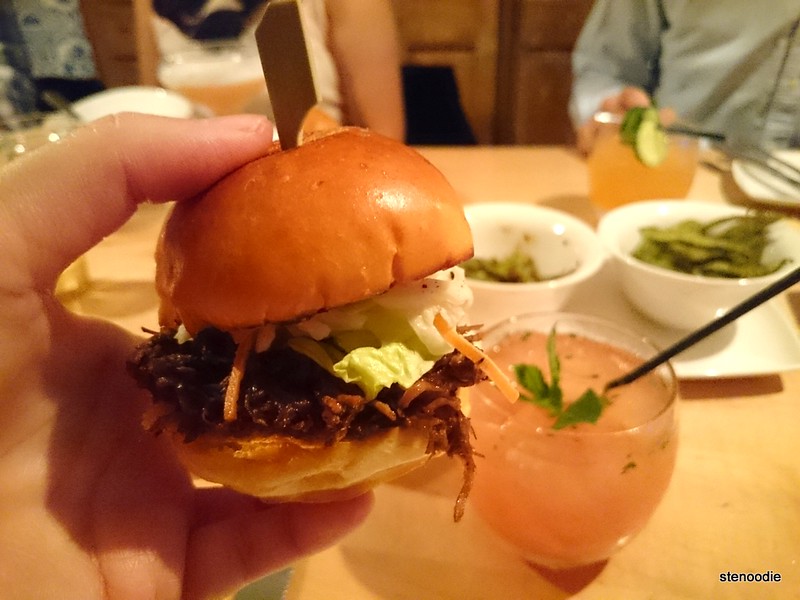 These Red Chili Wings were juicy and not spicy at all!  They were fried very nicely. 🙂  This was were we finally started to feel full and we were now worried if we were going to be able to finish the rest of the 3 dishes! :O 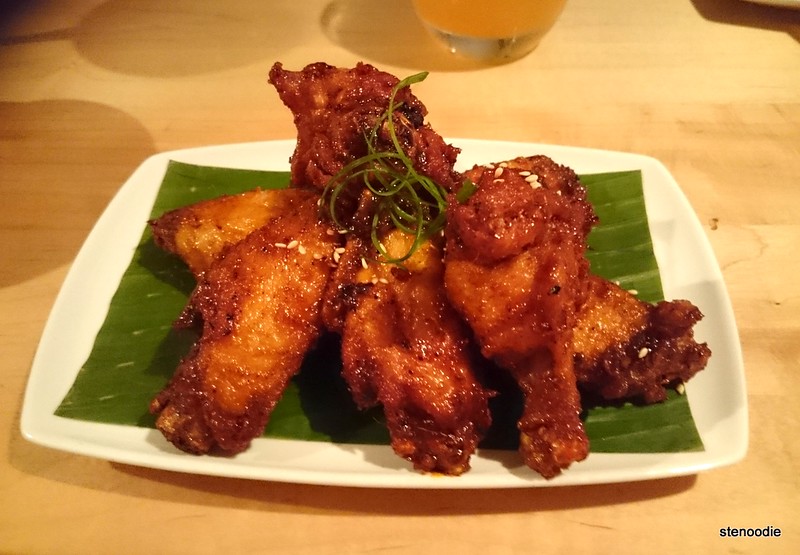 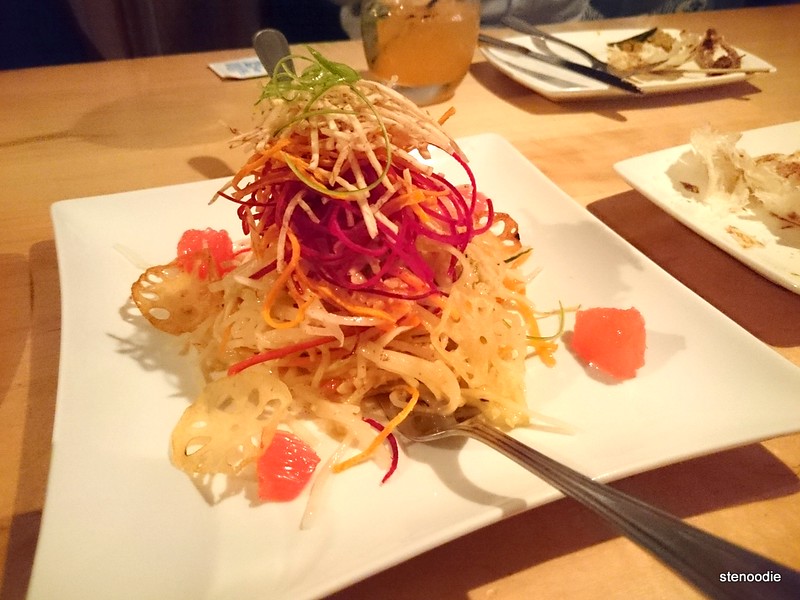 The Prosperity Tossed Slaw contained green papaya, jicama, peppers, pomelo, daikon, ginger, lotus root, taro, peanut, and covered with a sesame kumquat plum glaze.  This reminded me of the Singaporean Slaw that is served at Lee‘s.  Instead, this slaw is made with less ingredients and you get to toss it yourself!  It was very refreshing and we all especially liked the fried lotus root chip.  It was so thin and tasty; just like a chip (that is healthy)! 😀

This slaw was good to cleanse our palates a bit before the next course of food. 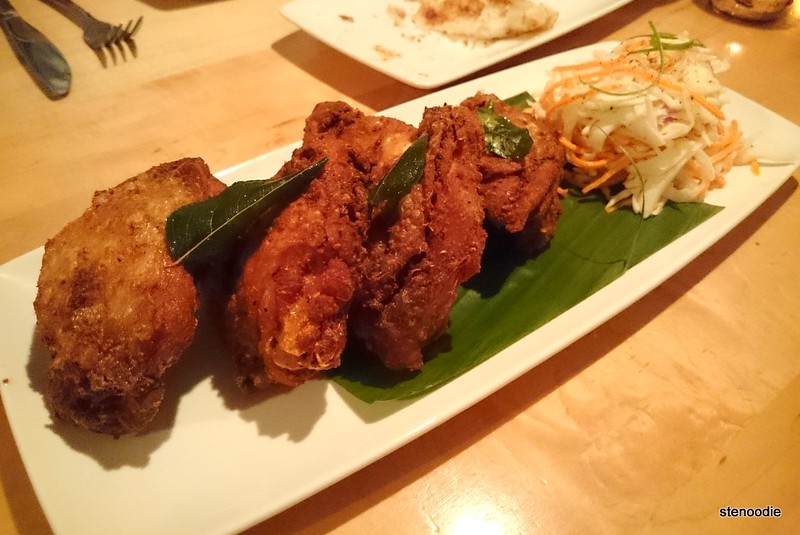 Next up came the Rempah Fried Chicken with a cabbage coleslaw.  It reminded me a little bit of the Red Chili Wings except these were bigger in portion.  The skin of the fried chicken was crispy and the inside was fairly tender.  However, I found that it was a little bit dry.  The cabbage coleslaw was a nice touch though. 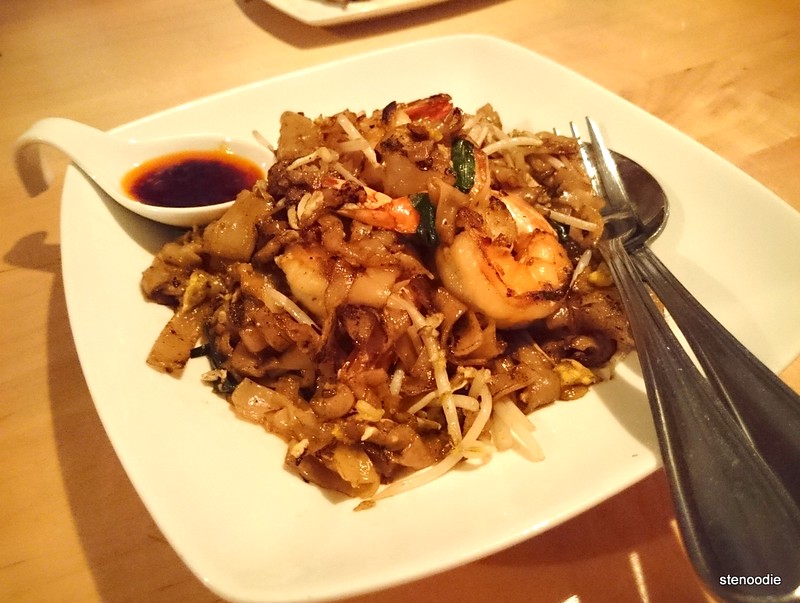 Lastly, our final dish of the sharing menu was the Char Kway Teow — charred rice fettuccine, prawns, chive, beansprout, and egg.  This is a fairly commonplace Malaysian dish that I’m sure most people have had before.  It was fairly heavy and overseasoned.  By now, we were all VERY full and it was difficult to finish this last rice noodle/fettuccine dish.  Ah!

At this point, Jessica wanted a second drink and wanted to try the teapot shots.  So four of us tried it.  To be honest, if I had known that we were going to try the teapot shots, I wouldn’t have ordered my first drink (alcohol is pricey!).  Nevertheless, I got to try this unique style of cocktail.  The Quintessential Peach arrived in a black teapot and was poured out into little teacups.  You drank it like a shot.  How cool!  The shot was pretty good.  You’ll have to share this with friends since it comes in either 6 or 12 oz. 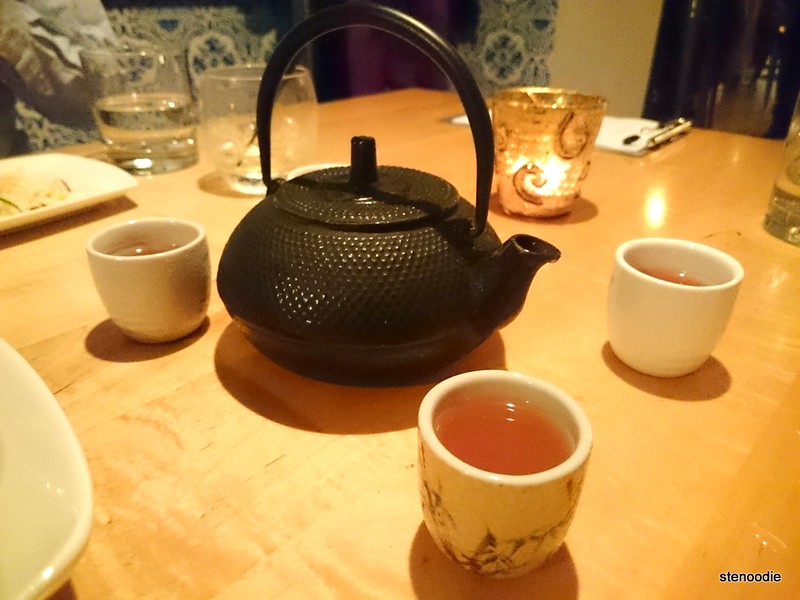 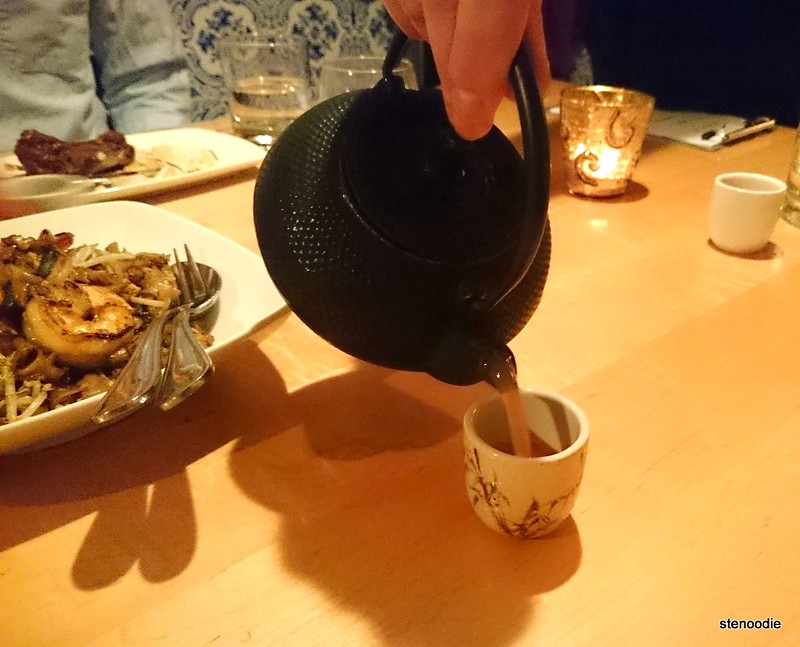 What a cool way to serve the shots! 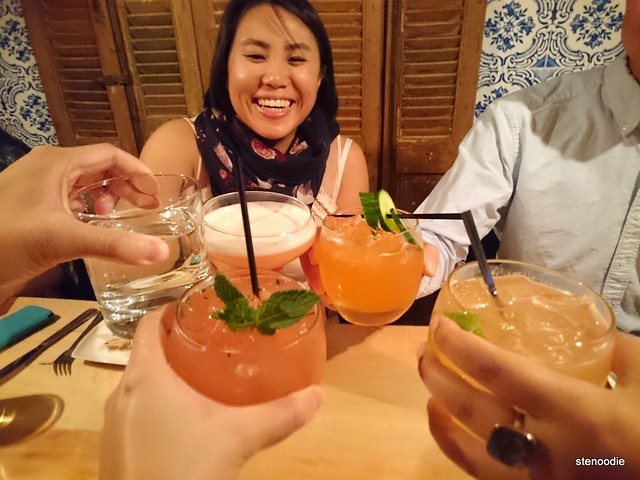 And that was it!  We were all very full and I was very pleased with the selection of food for the $35 sharing menu.  However, adding two alcohols to the bill made it a very expensive meal.  My advice is to try the sharing menu and get the teaspot shots to try (but have more than five people share it) so that the bill is more reasonable.

Would I come back to Soos?  Probably not.  I’ve already tried their sharing menu so I don’t believe there’s anything else I’d like to try (hmm, well maybe their dessert :D).  I really enjoyed the quality of the food, selection, and service.  The ambiance of the restaurant was especially lovely.  Try this place out if you want some well made Malaysian re-imagined street food! 🙂 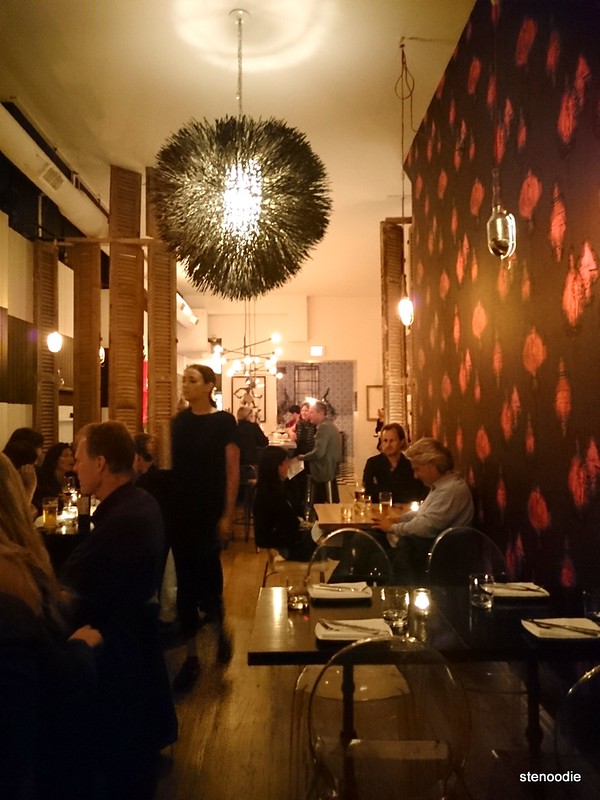 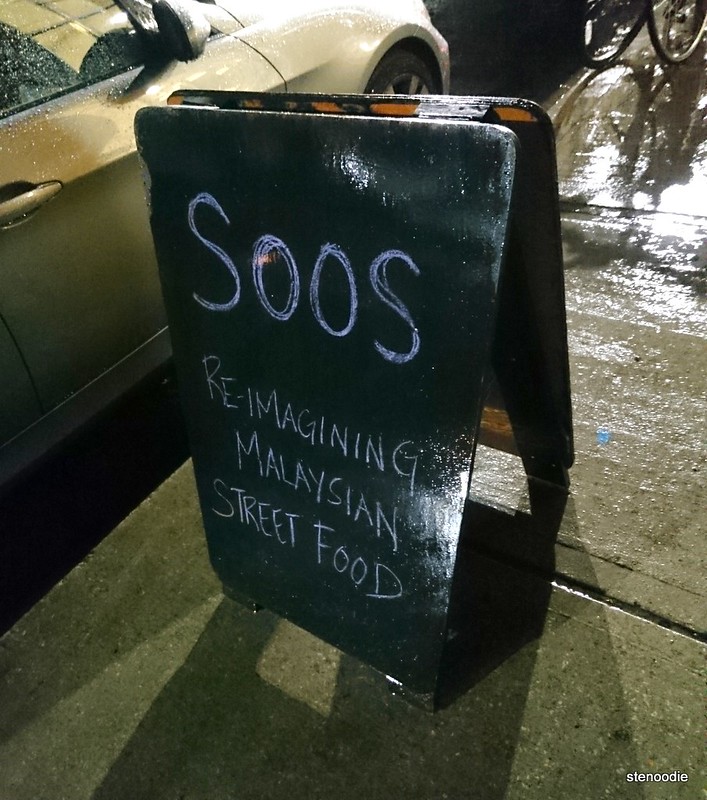 It was a rainy night

3 Responses to Birthday Celebration at Soos!