On the third night of our stay on the Norwegian Getaway Cruise ship, we went to the Taste Dining room for dinner.  Taste was one of the three main dining rooms on the ship.  Again, just like the first two nights, getting to the restaurant early was key because it ensured that you got a table and that if you placed your order quickly with your server, your food would also come out faster too because you would be beating the rest of the other passengers who would just be arriving.

Thus, we entered the restaurant at 5:20 p.m. (even before our agreed upon time of 5:30 p.m.) and started perusing the menu to see what we wanted to order. 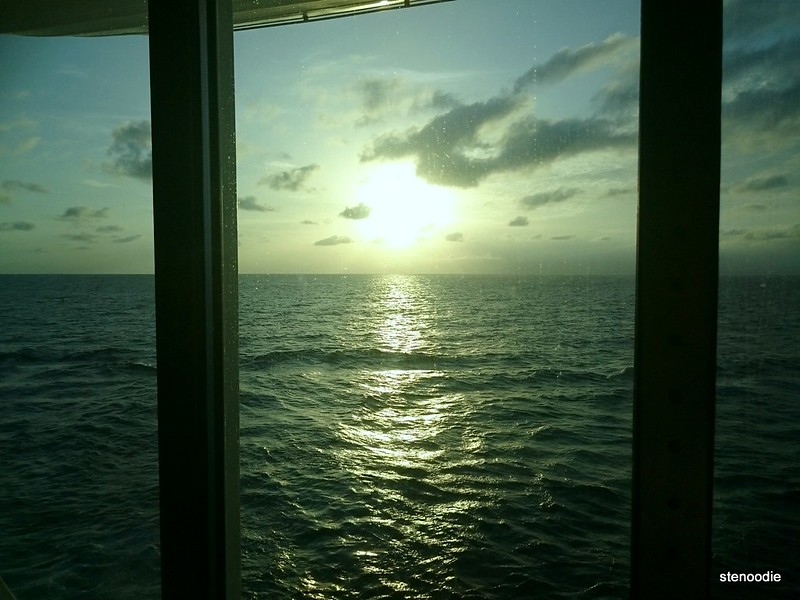 The sun starting to set at 5:30 p.m. Beautiful view to sit right next to the windows

I don’t need to mention again that I shared all of my dishes with my two foodie friends so that we could maximize the variety of food that we ate. 😀   Already, this cruise was much more fun and enjoyable than last year’s in this manner.  Hehe #foodie4life. 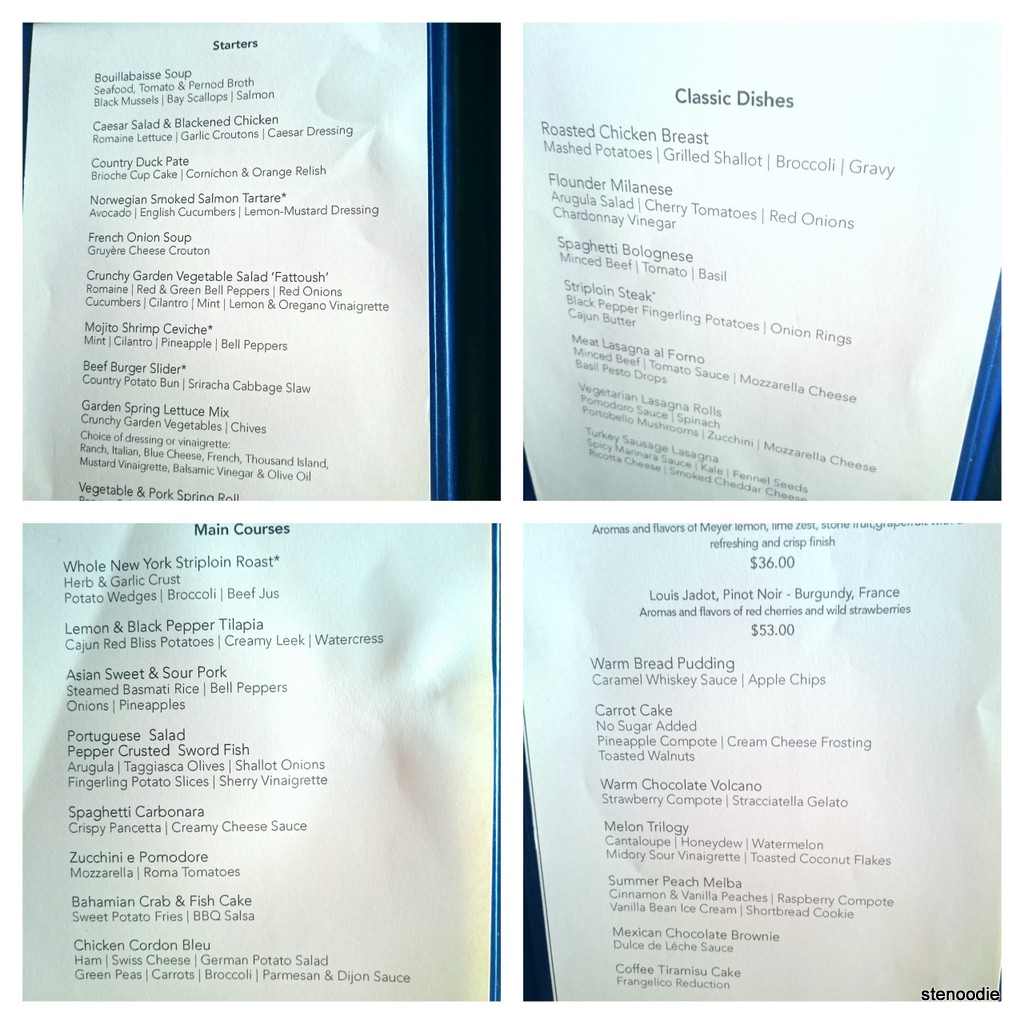 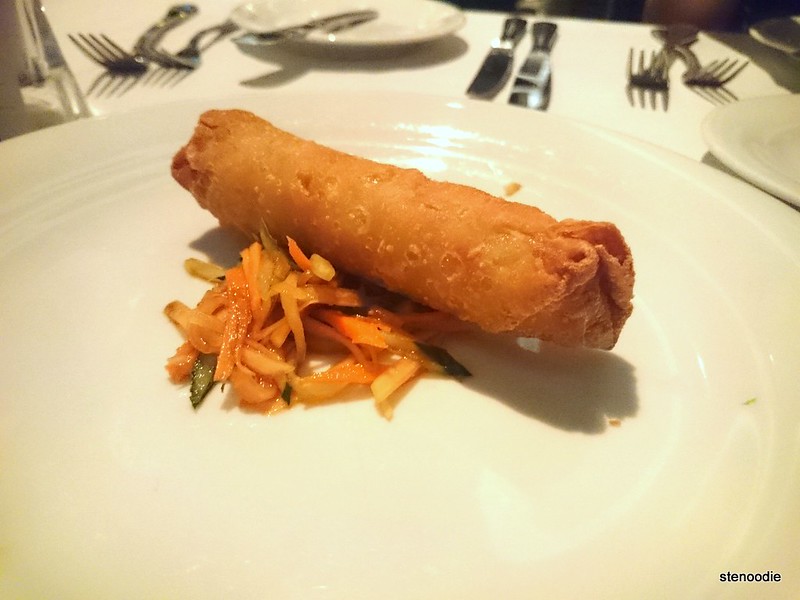 We shared these yummy pork spring rolls.  The sweet chili sauce was given to us by the server a minute after she had set the spring roll on the table. 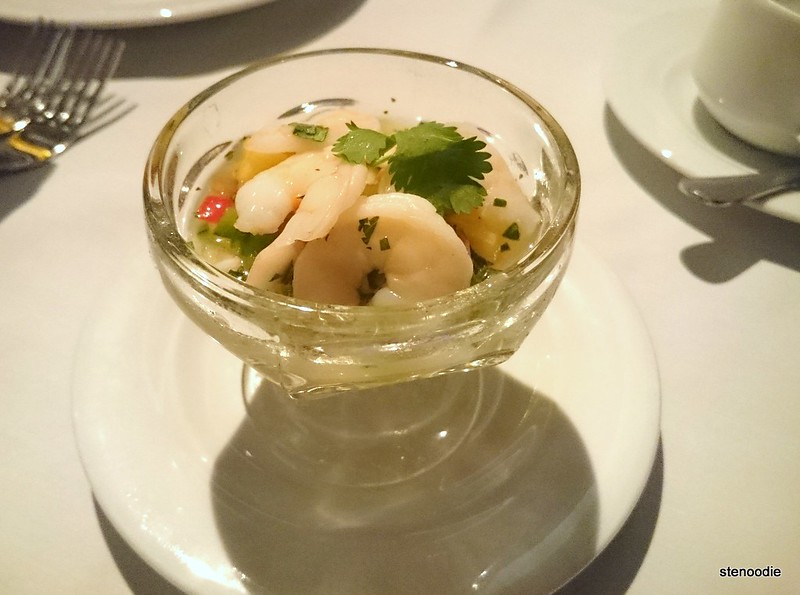 The Mojito Shrimp Ceviche was okay but I really liked the stuff inside — mint, cilantro, pineapple, bell peppers — good for digestion because it was a little tangy and sour.  A great start to the meal! 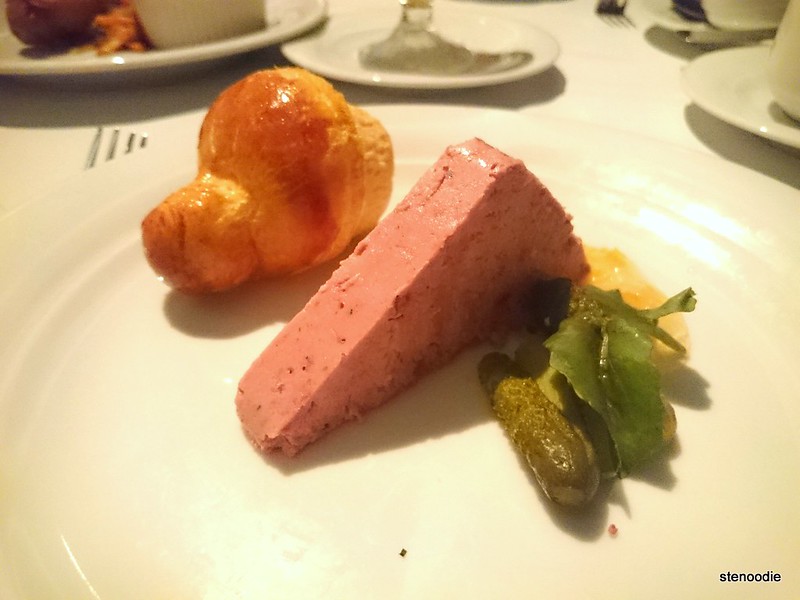 The Country Duck Pâté was good!  There was a cute brioche cup cake that looked like a muffin.  We had some funnies with this dish because Lawrence kept purposely mispronouncing “pâté” as “pate” :P. 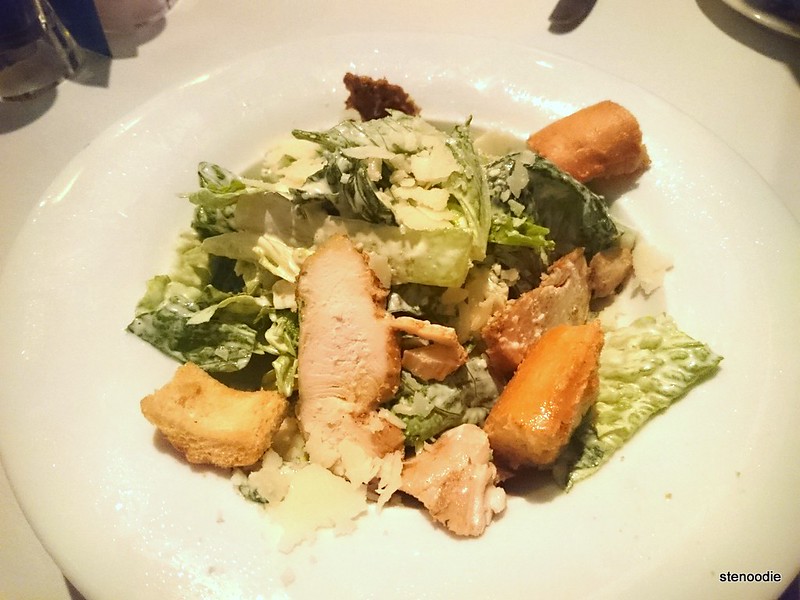 The Caesar Salad & Blackened Chicken was drenched with sauce but I liked it.  The blackened chicken wasn’t what I expected unfortunately.  It was a bit bland. 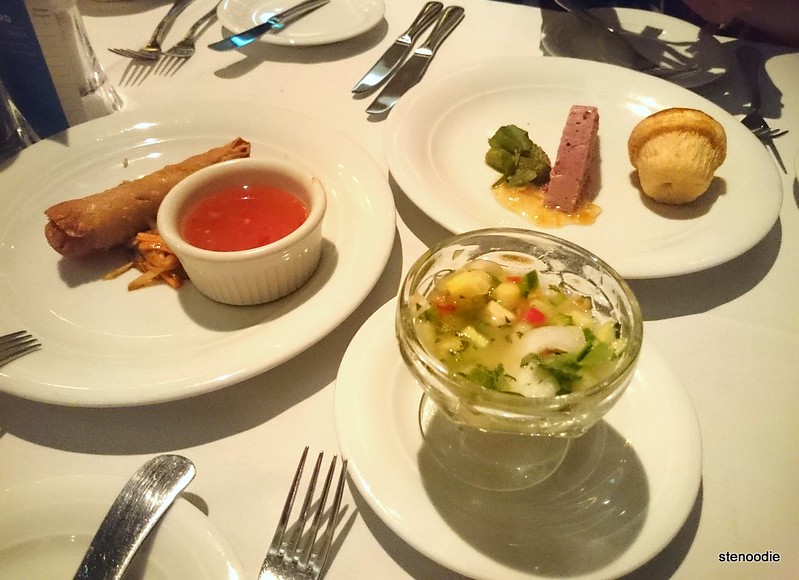 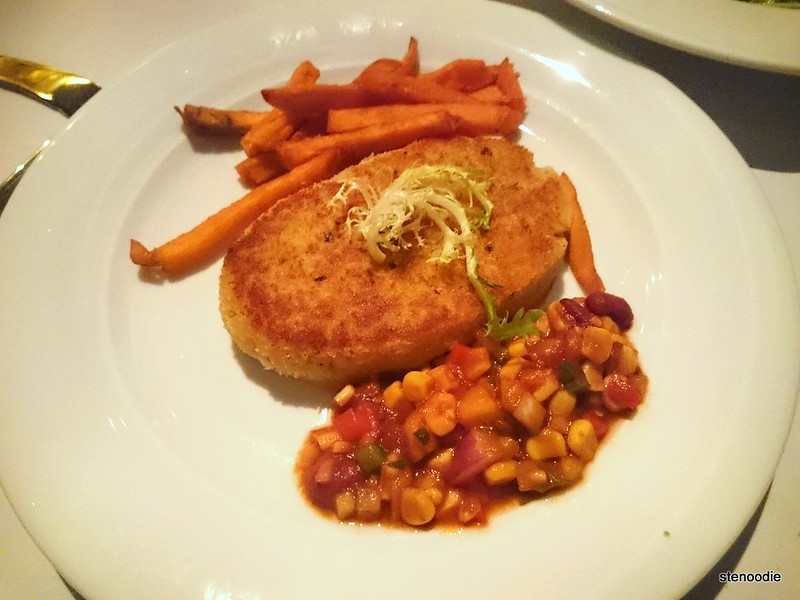 The Bahamian Crab & Fish Cake was good.  I wished it was crunchier on the outside like how some restaurants make it.  The BBQ salsa was salty.  The sweet potato fries were decent. 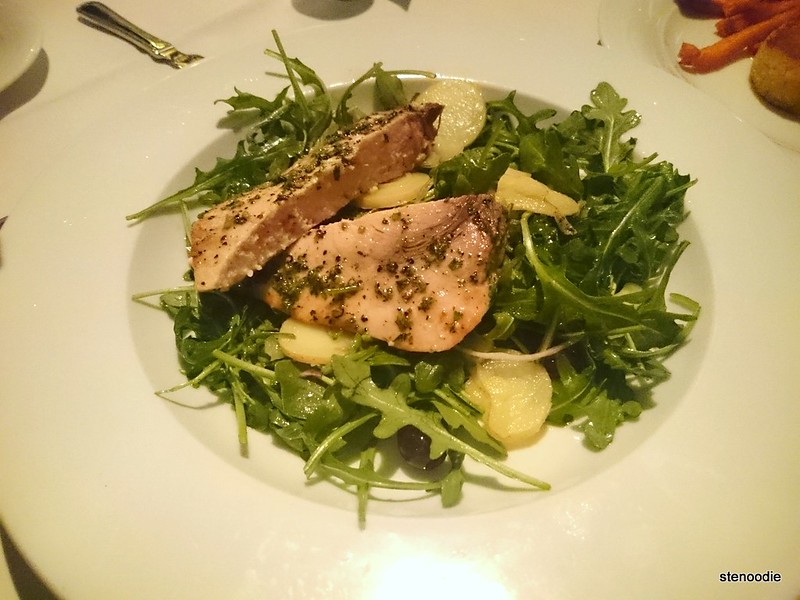 The Portuguese Salad & Pepper Crusted Sword Fish was bland.  All you could taste was the pepper on the fish.  I liked the arugula salad; its bitter taste was good and the olives too.  This was one of the only greens dish that we ordered, so we finished this one up relatively quickly (leaving the sword fish on the plate though).

I tried a bite of Sarah’s Spaghetti Carbonara — it was absolutely amazing but heavy. 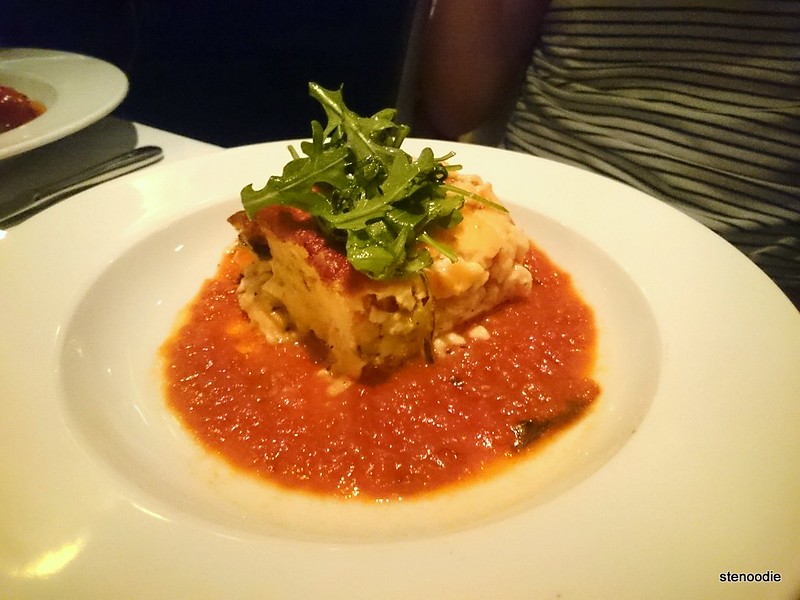 The Zucchini e Pomodore that Jason ordered was a lasagna that was absolutely delicious!! 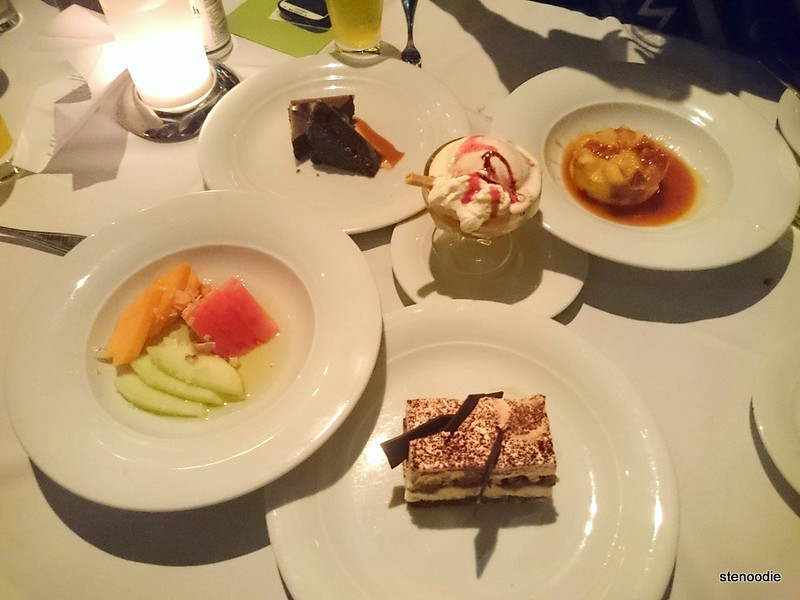 The five desserts we shared 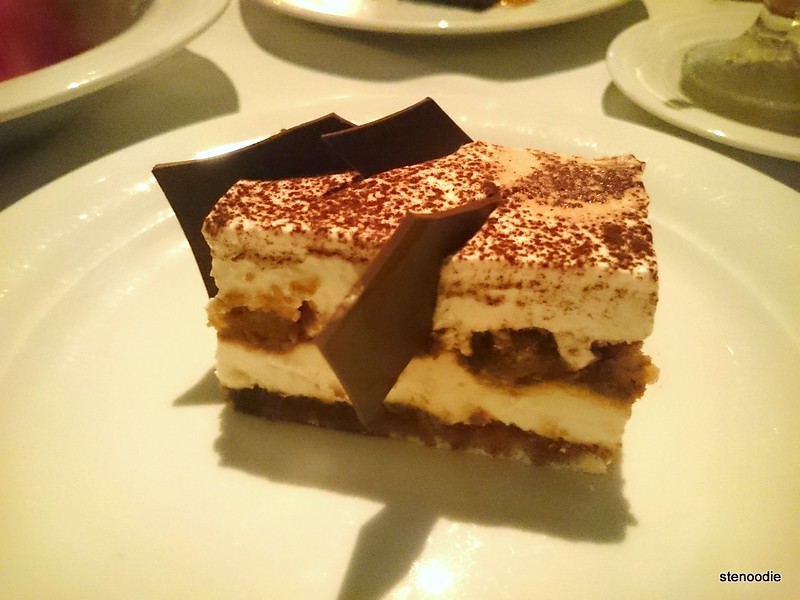 Lawrence raved about the tiramisu.  It was definitely so good!!  Best.

This Coffee Tiramisu Cake doesn’t look that amazing in this photo but it was a really off-the-top perfect tiramisu cake! 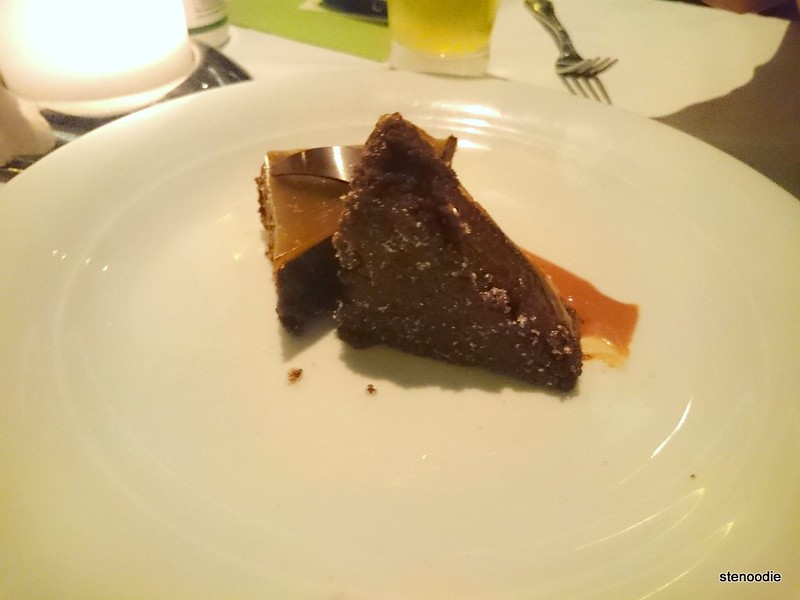 The Mexican Chocolate Brownie  was too sweet but well made. 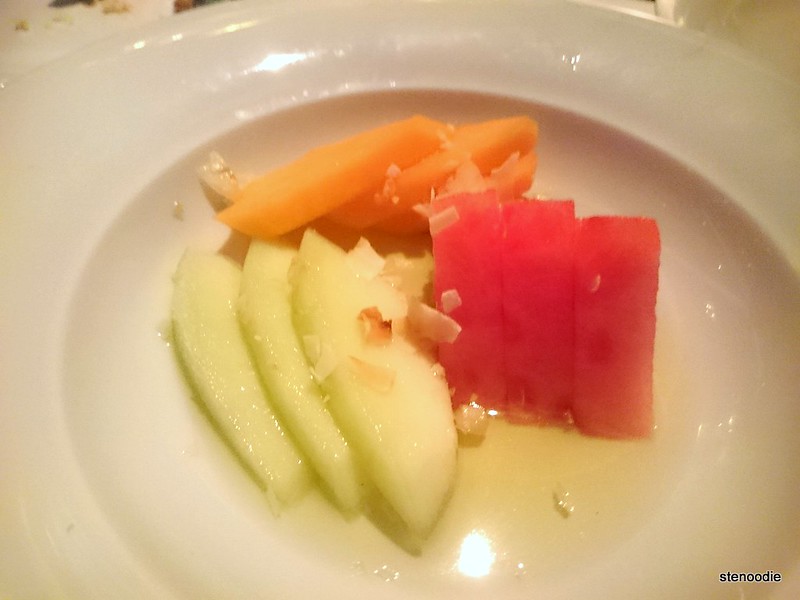 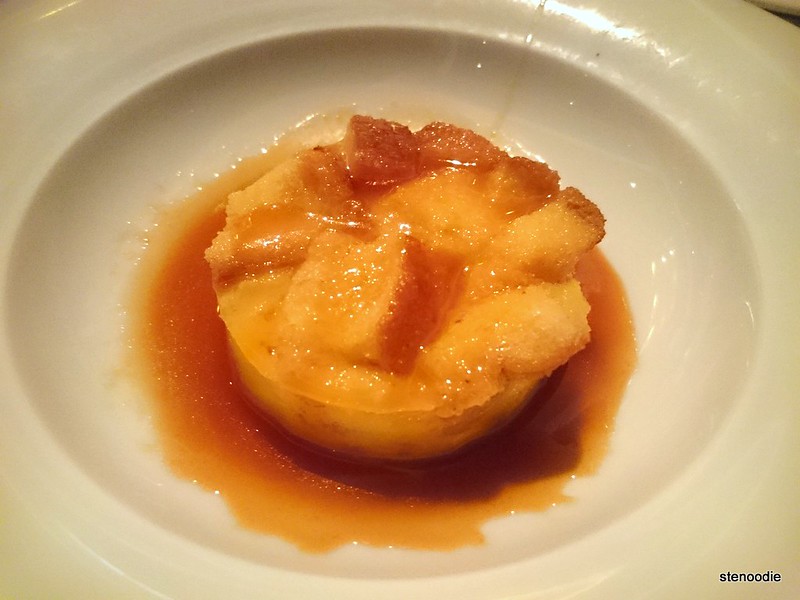 The Warm Bread Pudding wasn’t good with the caramel whiskey sauce.  It just didn’t seem to go well together.

It was Wayne’s birthday so the kitchen and staff surprised Wayne with a small birthday cake!  It was a vanilla pound birthday cake ^_^.  We all sang too.  It was so good.  It should have had a candle on it though. 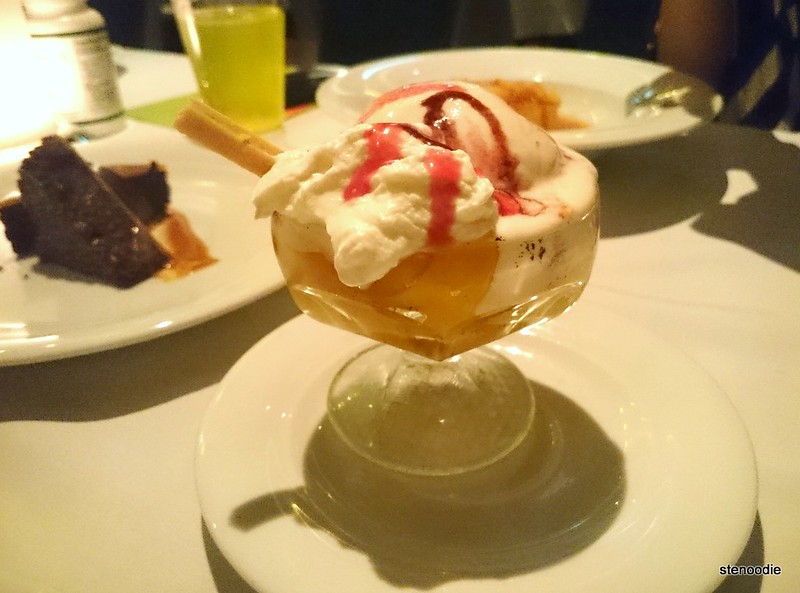 The Summer Peach Melba was good.  It was such a beauty to behold with the cinnamon and vanilla peaches underneath the vanilla bean ice cream, the colourful raspberry compote, and the cute little shortbread cookie.

After all that, thank goodness for digestive enzymes!!!!  Otherwise we would have been even more so full, feeling massive itis, and gain weight too. XD 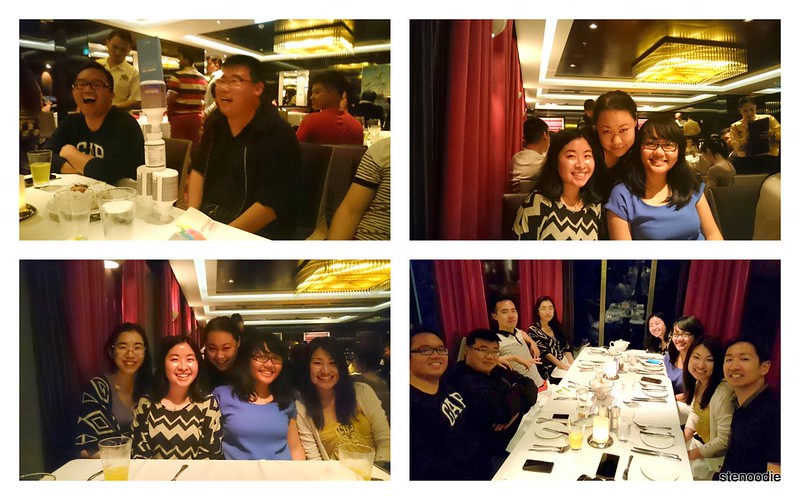 Haha, this was a fun night and dinner service was so fast because we arrived early! 😀

I loved Day 3 dinner at the Taste Dining Room.  Stay tuned for more blog posts from my cruise trip on board the Norwegian Getaway! 🙂