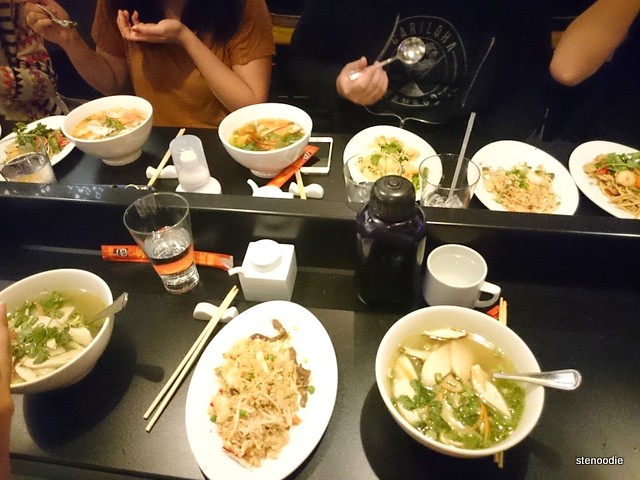 Dinner at Shanghai’s on the Norwegian Getaway cruise ship

For our fifth night on board the Norwegian Getaway seven-day cruise ship, we decided to eat at a specialty restaurant for dinner instead of at one of the main dining rooms like Tropicana, Taste, or Savor like we had already been to for the past four nights.  The beauty of dining on a cruise ship like the Norwegian Getaway was that there were seven restaurants that you could dine in; hence their “free style dining” and “cruise like a Norwegian” tag line.  You could choose whatever restaurant you wanted to eat at with no restrictions of dining time or reservations. 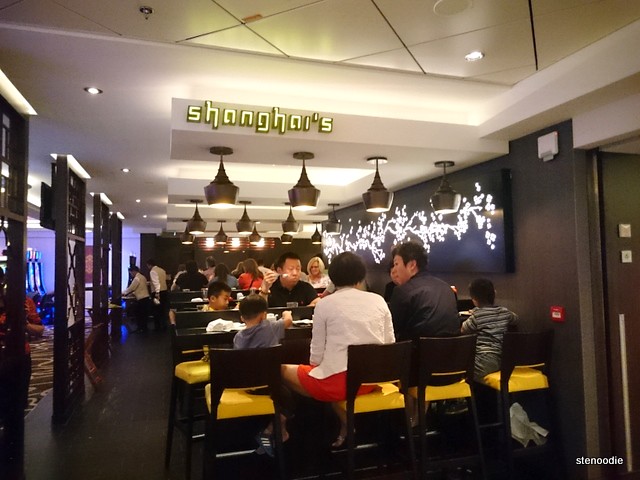 We decided to dine at Shanghai’s, a noodle bar, for some Asian cuisine.  We were there very early just in case there was a line.  Good thing we arrived there early because there definitely was a line!  Since we were there before 5:30 p.m. though, we got ourselves a table. 🙂

Shanghai’s is not a big restaurant at all like Tropicana Dining Room.  The eight of us were seated at a long table on high stools.  Some of our other friends sat at a different table next to us.

The menu was fairly simple.  You could choose some dim sum as appetizers, noodles from the wok, noodles in broth, fried rice, and desserts.  We filled in the paper order sheet and handed it to the server.

Very quickly, we received our food!  We shared many of the items as I typically like to do in order to try more dishes, but this time, shared food with everyone on my side of the table. 🙂 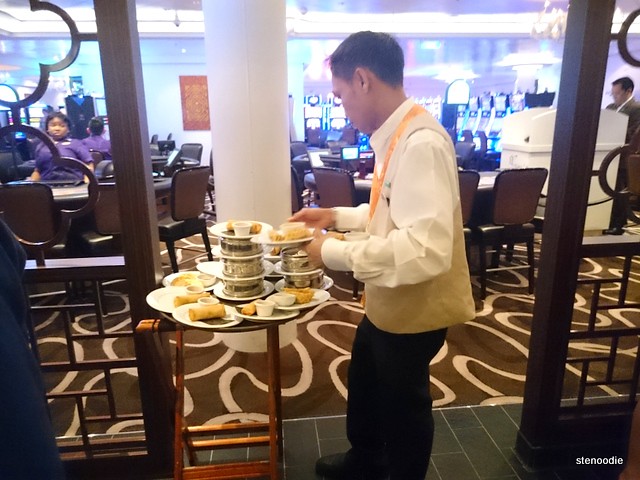 Sorting out all of our dim sum orders! 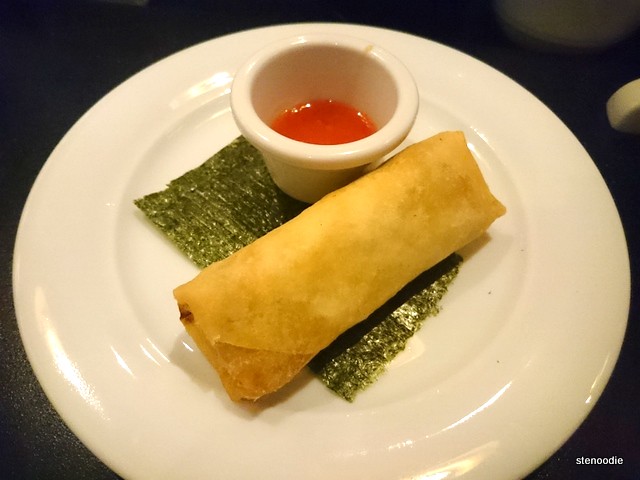 Yum!  This was a big spring roll… it filled me up already after eating just one. 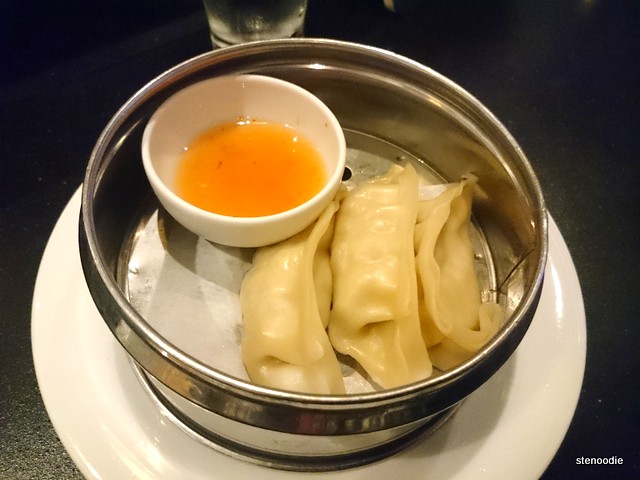 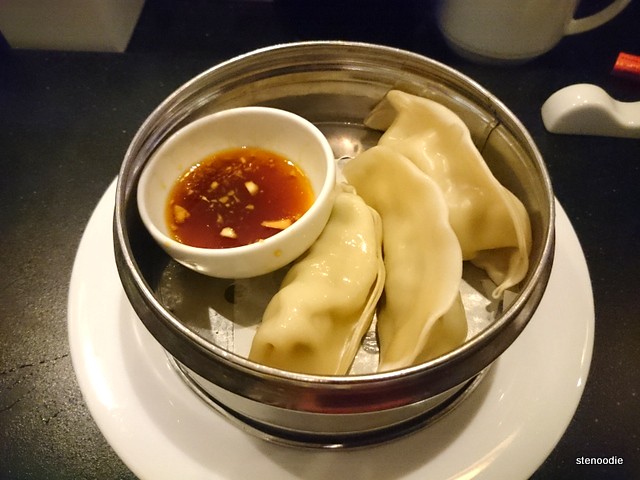 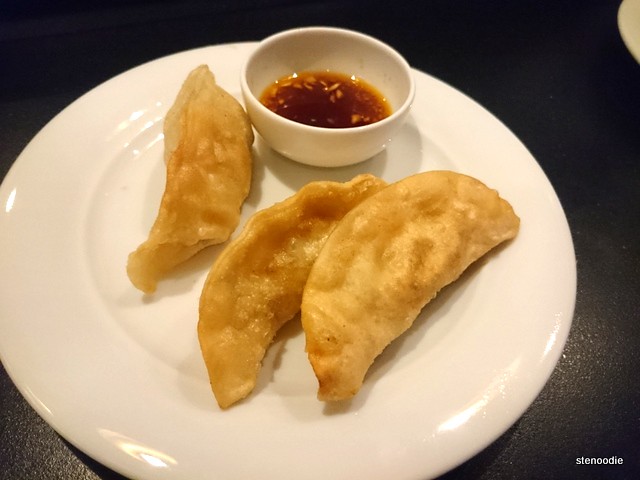 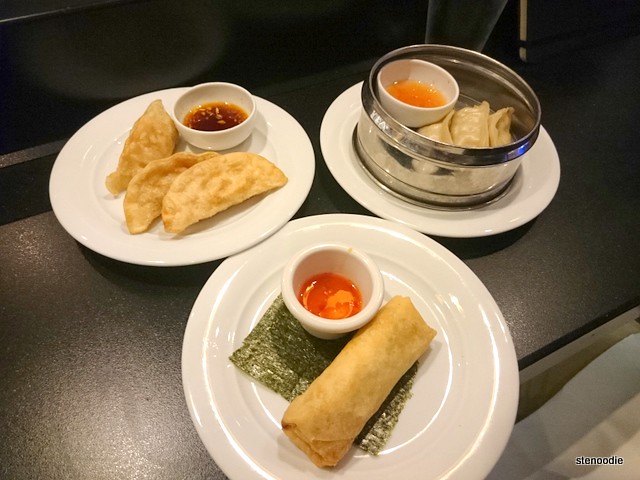 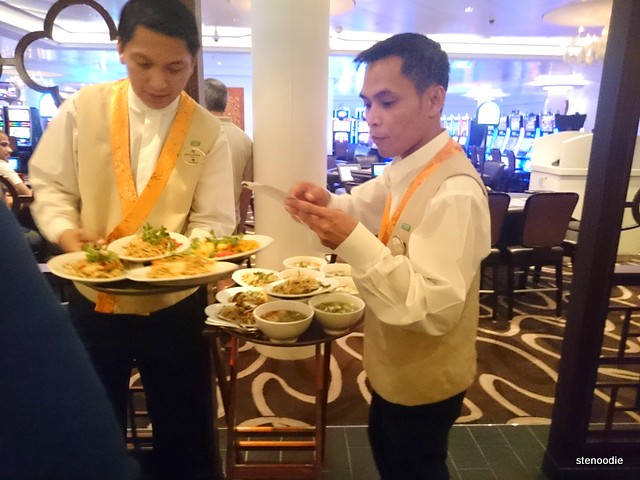 Look at all those organized trays of food! 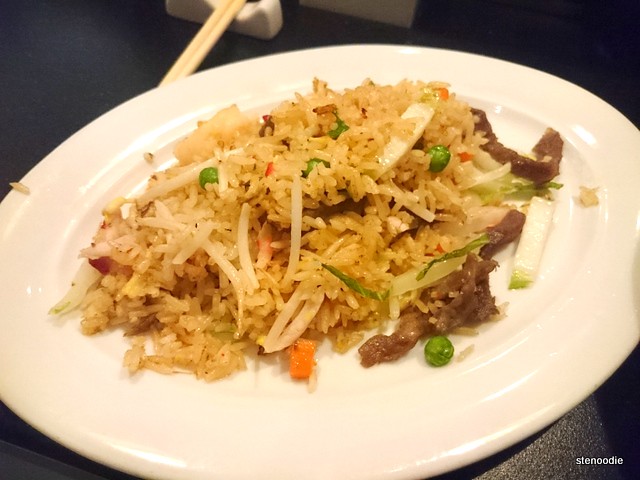 This Combination Fried Rice was so good!  The consistency and texture of the fried rice was perfect.

I loved the glass noodles in this noodle bowl.  The chicken broth was also very delicious.  I had to stop myself from drinking the broth since I didn’t want to ingest too much MSG.  I liked how wholesome this noodle bowl tasted. 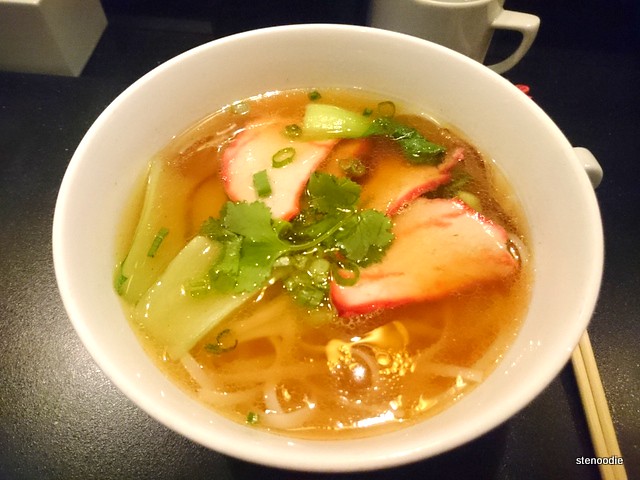 I tried the char siu in this rice noodle bowl and thought that it tasted more like pork mimicked to look like char siu instead of actual char siu pork.  But maybe it was actual char siu.  It just didn’t taste that awesome and was just okay. 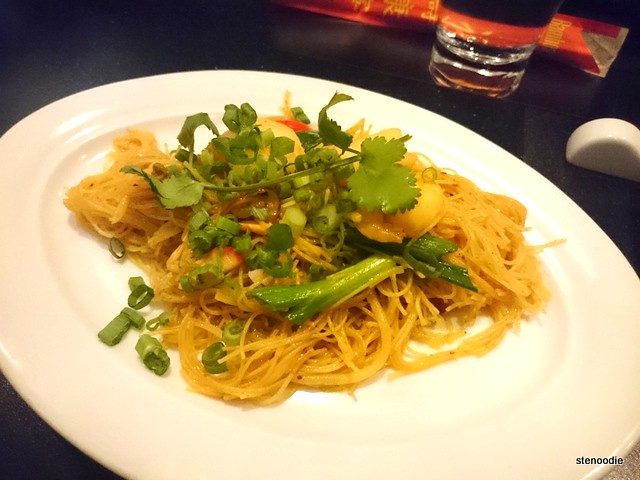 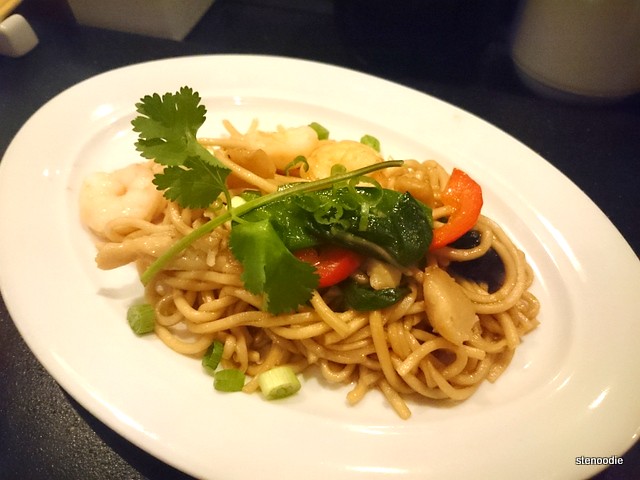 Yum!  I loved this lo mein.  It was so delicious! 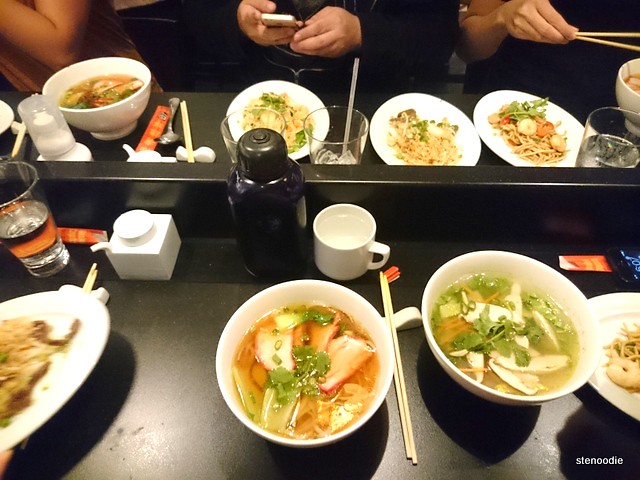 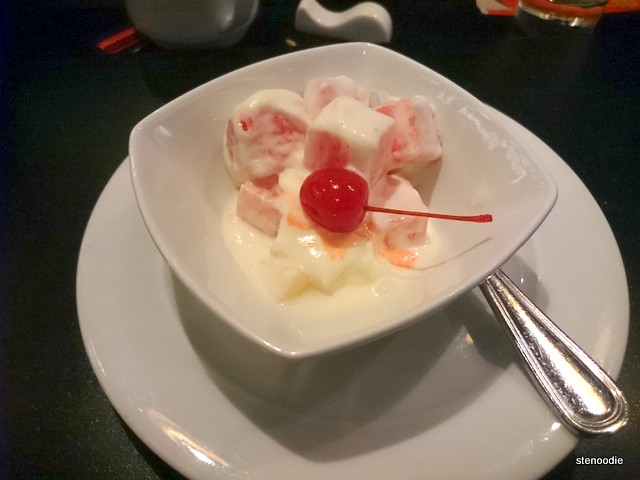 Unfortunately, the desserts here at Shanghai’s were quite disappointing.  At first, I was very curious about what a “Panda Salad” would be like.  However, the Panda Salad just turned out to be a fruit salad with coconut and pineapple with lots of condensed milk.  This was underwhelming.

The Five Spice Chocolate Cake was also very mediocre, bordering on the side of “not tasty”.  No one really enjoyed it.  However, I had to give it points in terms of its presentation! 🙂  That swirly chocolate on the top was so cool. 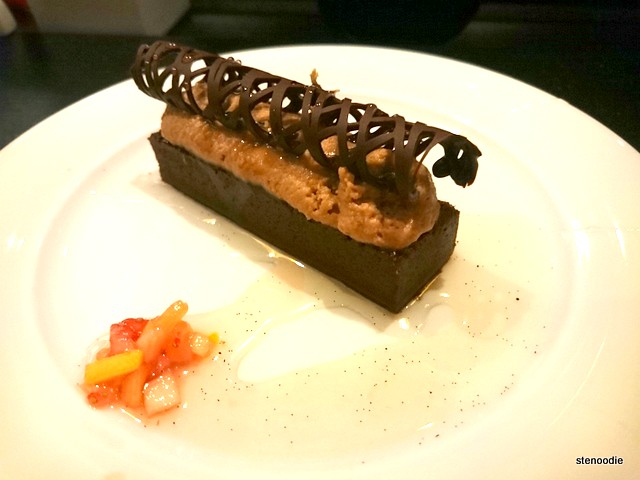 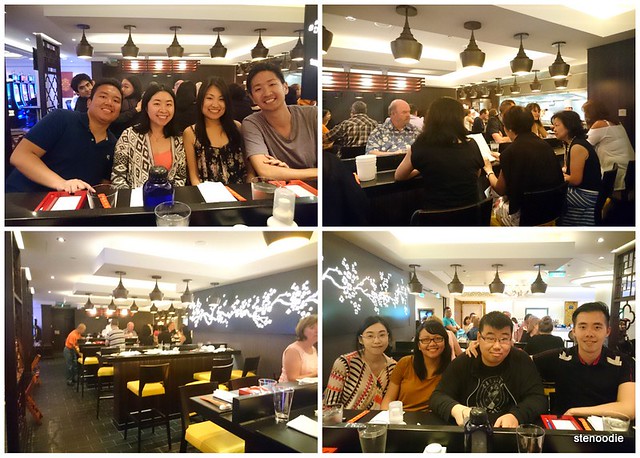 Nice place to dine on the cruise

All in all, it was really great to have some Chinese food on the cruise and the Chinese food was actually quite delicious and impressive!  It wasn’t bad at all.  The noodle and rice dishes were the outstanding winners and all really good.  The dim sum was so-so and the desserts were poorly done.  Nevertheless, it was a nice change from the Western dishes.

Stay tuned for upcoming posts about the rest of the meals and excursions on board the Norwegian Getaway 2016! 🙂