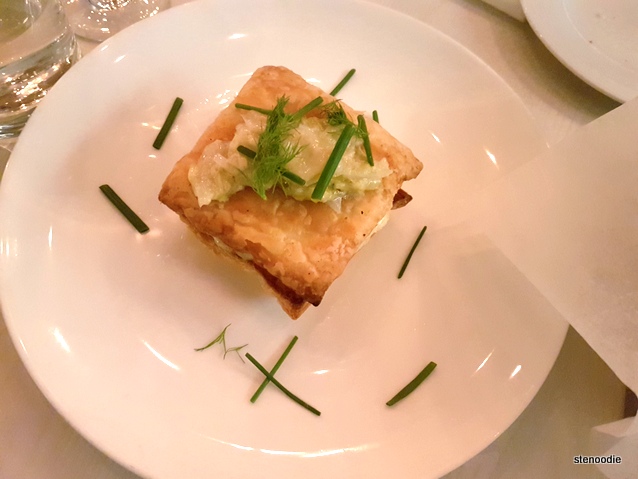 Ken and I celebrated New Year’s Eve with dinner at Oliver & Bonacini Café Grill at their Yonge & Front Street location.  Our reservations were booked at 7:30 p.m. and there were a lot of people dining already when we arrived.  It was a really nice dimly lit restaurant perfect for dates or large casual gatherings.  They had a lot of large tables for big groups.

Service here was professional and there was free wifi too.  On this night, they had a New Year’s Eve specials menu and half price off on all bottles of wine. 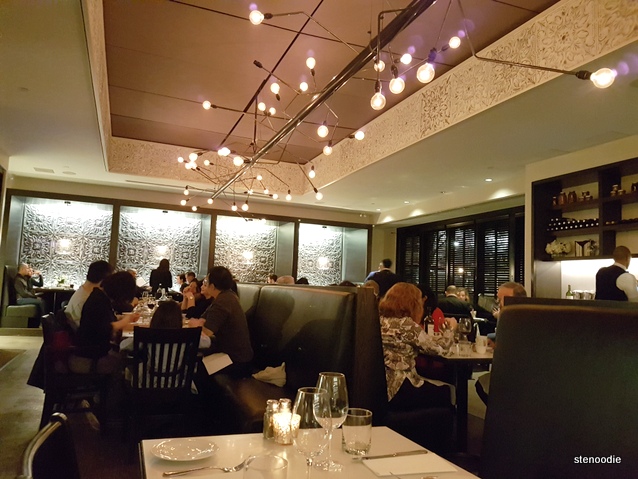 So chic and classy 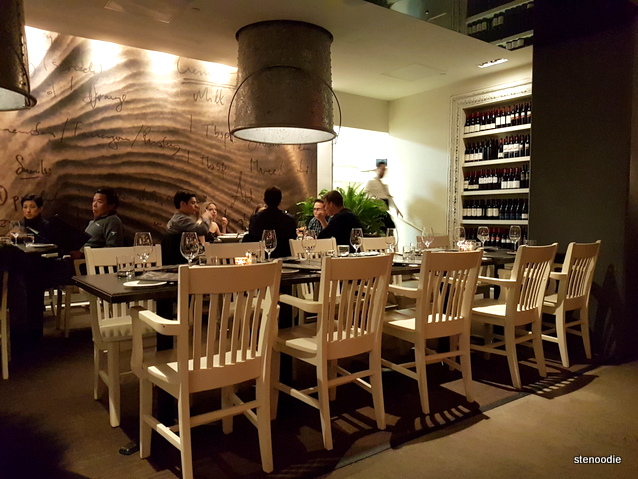 Those large lights looked like upside down pails of water 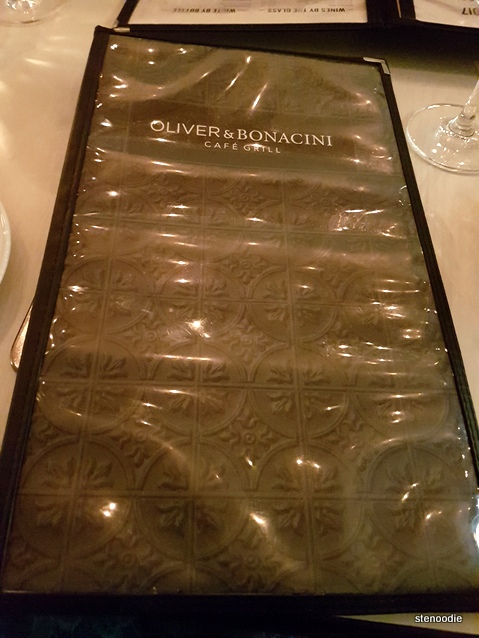 Ken ordered a glass of Sparkling Moscato from Jacob’s Creek, Australia while I got a glass of Rosé from Henry of Pelham from Niagara.  The Moscato was a tad sweet and tasted almost like apple cider.  I liked it.  The Rosé was pretty good too. 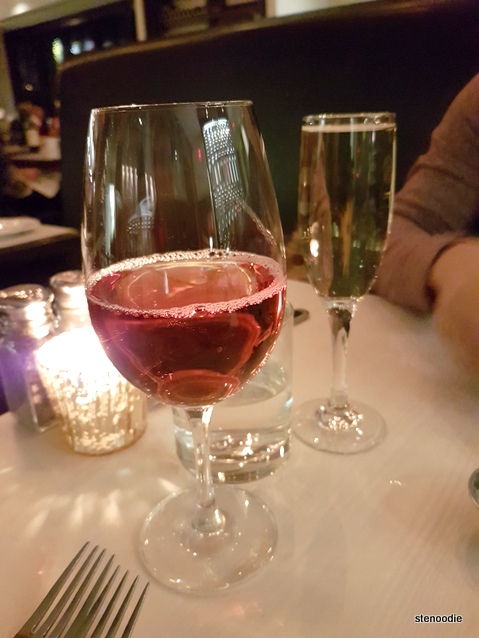 The complimentary ciabiatta bread came with butter that was stamped “butter”. 😀  Ken liked the fluffiness of the bread. 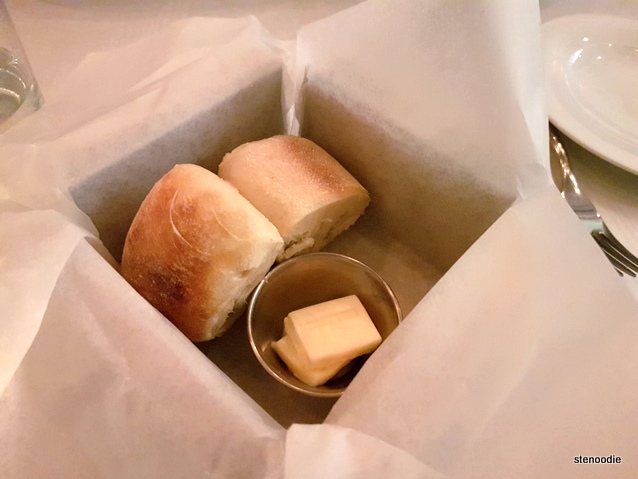 I’m really glad that we tried the Leek Tart as an appetizer!  It was really good!  It was not assembled like a traditional ‘tart’.  There were two pieces of puff pastry that sandwiched brie and cream and what tasted to be onions and cabbage.  There wasn’t a lot of leek at all for this tart (unless our taste buds were mistakened).  The only leek we saw were the ones sprinkled on top of the tart and around the plate. 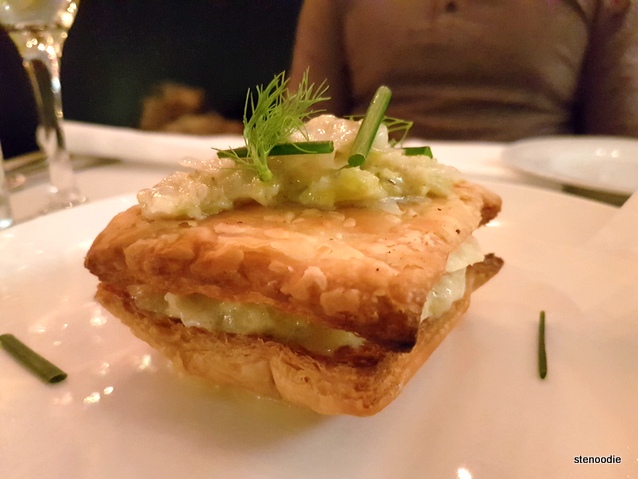 Either way, I really liked this leek tart especially near the end when I got a big chunk of brie cheese in my mouth.  Yum!  Brie cheese is love. 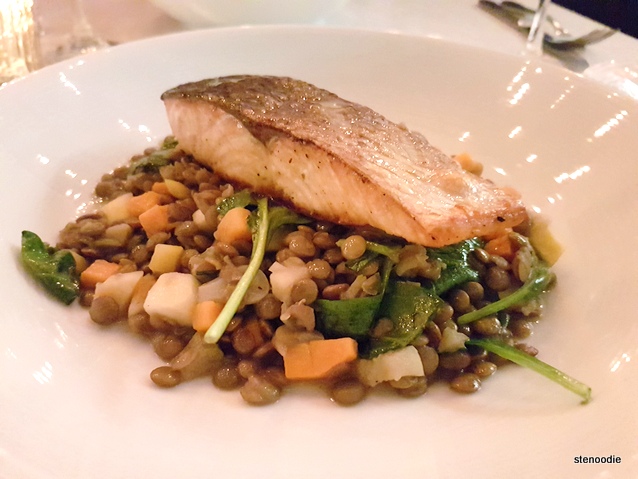 My Atlantic Salmon main dish came with green lentils, roasted winter squash, and lemon & white wine butter sauce.  The narrow piece of salmon sat on top of a gigantic pile of mostly green lentils and squash pieces.  I didn’t realize that there were going to be so many lentils lol.  Unfortunately, I was quite disappointed with this dish.  Why can’t western restaurants ever cook salmon properly?!  The piece of salmon was quite firm and dry.  There needed to be some more sauce to the dish.  The combination of green lentils and squash in the butter sauce did taste quite good at the beginning.  Once the dish started to get cold though, the sauce was barely detectable and the overall dish was just so-so.  More sauce and juicy salmon, please! 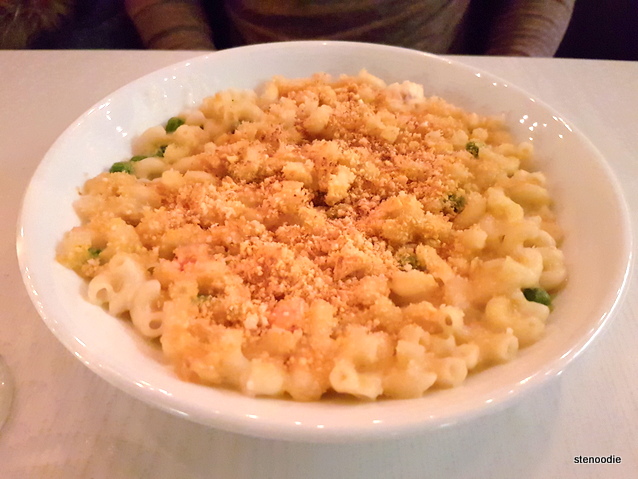 Ken’s Lobster Mac & Cheese had Atlantic lobster, cheddar, sweet peas, cheese curds, and Goldfish crumb in it.  When it arrived, it was a huge plate of pure lobster mac and cheese!  I really liked the creaminess and cheesiness of the dish.  The chunks of lobster that were present were quite good and meaty.  However, we both thought that there wasn’t enough of it in the dish.

Despite the subtle disappointments in the food, we still had a great time dining in.  The drinks, service, and atmosphere were really great.  I would recommend the Leek Tart if you try O & B Café Grill. 🙂 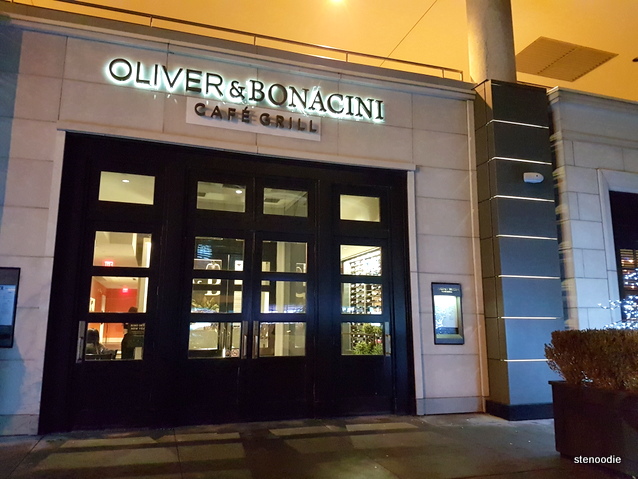