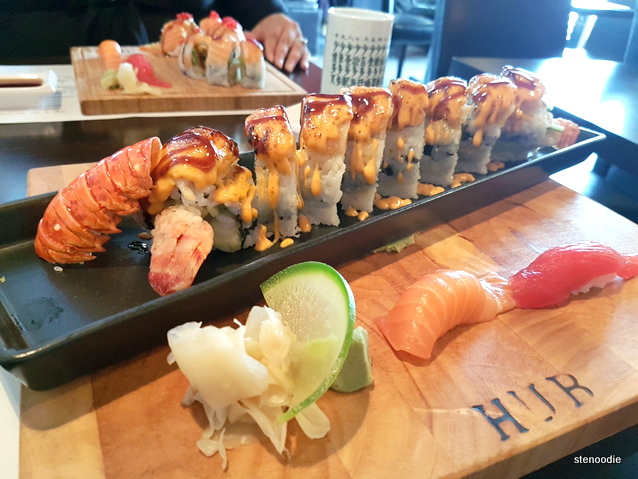 After seeing Clarissa and Kim dine at Hub Sushi Fusion Japanese Restaurant a while ago and being mesmerized by their delicious photos of sushi, I had placed this restaurant in my to-go list to try it out someday.  The day came and the three of us were able to set up a lunch date on a Saturday to enjoy a sushi lunch and some quality time catching up.

I was the very first one to arrive at Hub Sushi at 11:30 a.m. when they opened.  I really liked the decoration and whimsical feel of the restaurant.  There was a fake tree in the middle of the restaurant with bright ornaments and lights hanging off of it. 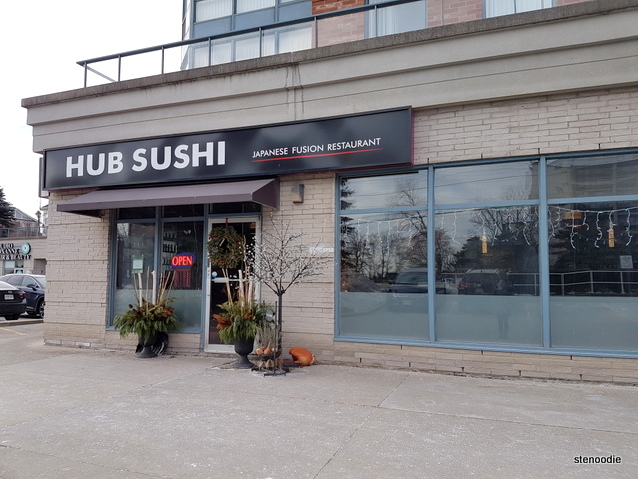 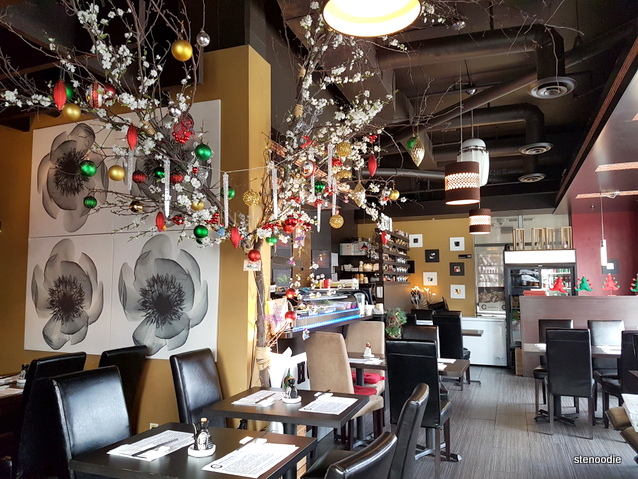 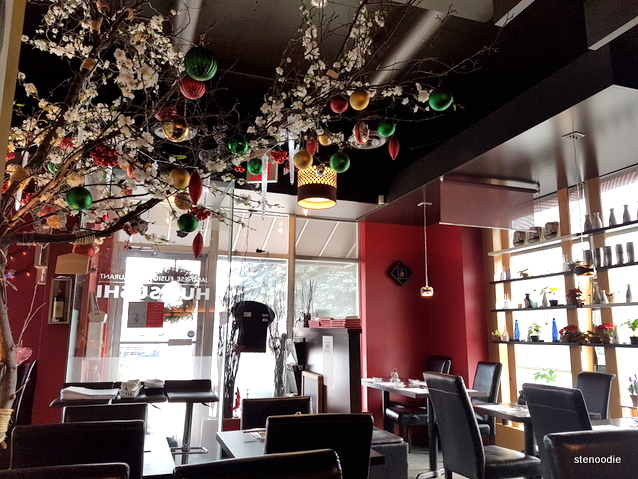 During the winter, they can hang ornaments! They can put birds or blooming flowers for the spring and summer seasons 🙂 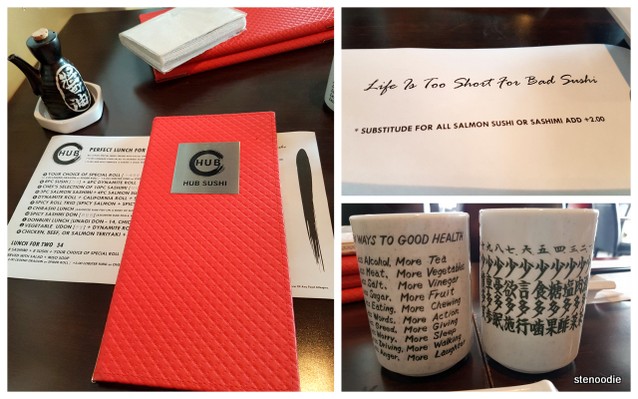 While waiting for Clarissa and Kim to arrive, I took a look at the menu and I was really impressed with how many varieties of special sushi rolls the restaurant offered.  It was also really helpful that they included a separate photo album of just the sushi rolls so that you could see what some of them looked like before you ordered them (or it might give you ideas on what to order).  In addition to sushi and sushi rolls, they also served sashimi, Korean dishes, udon, and donburi.  To me, it seemed like it was Korean-run since many of their menu items were characterized in Korean characters. 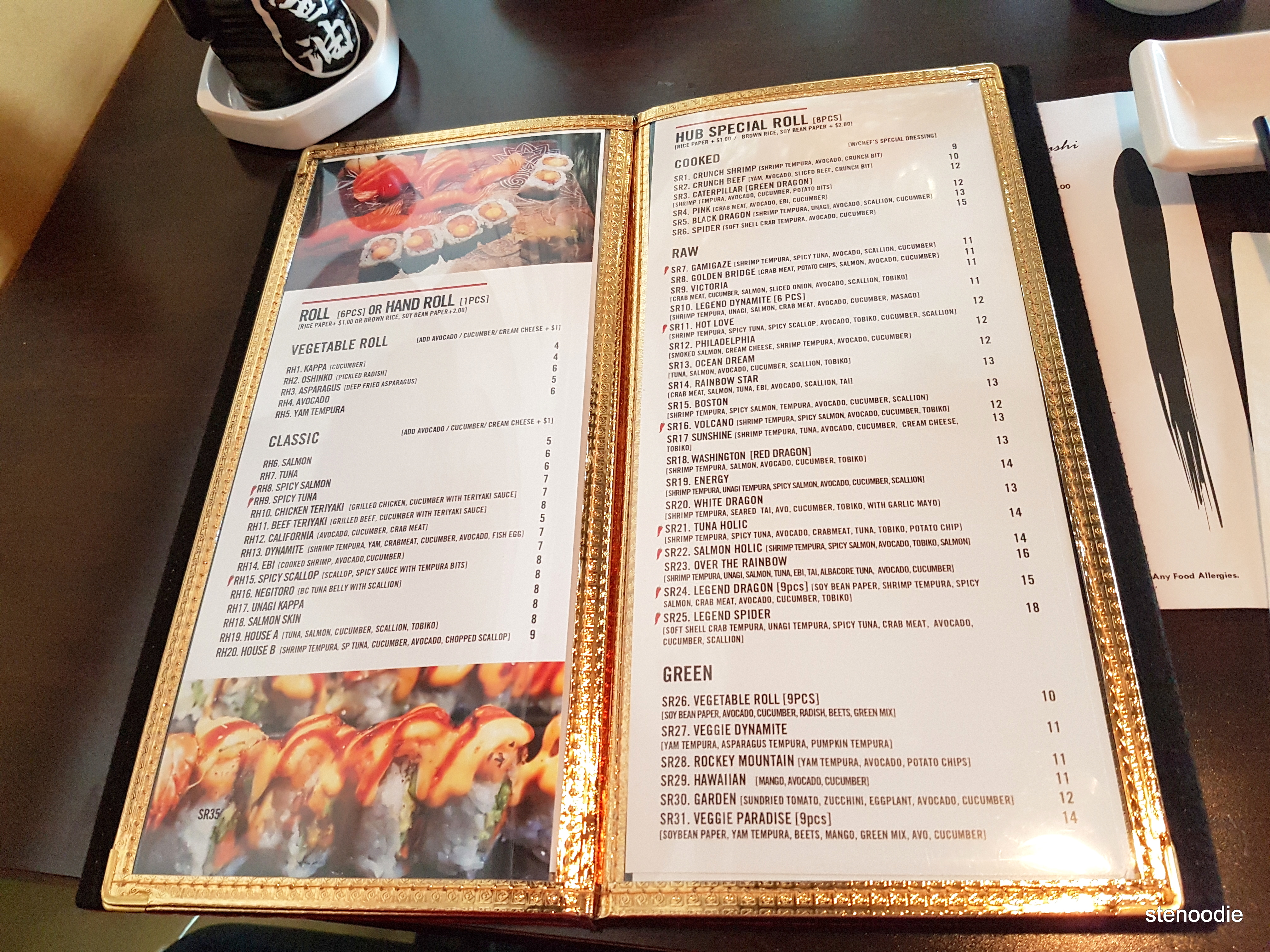 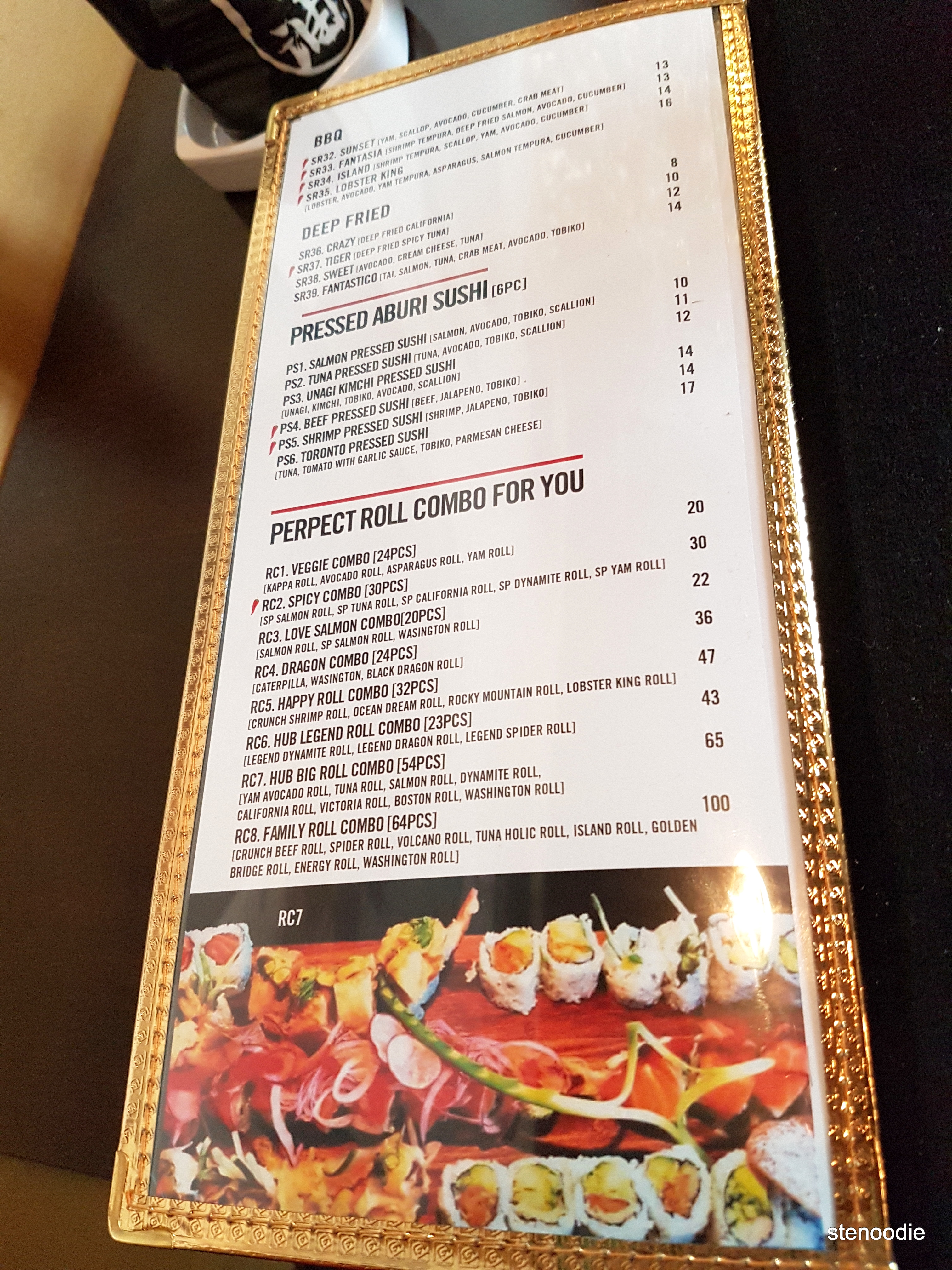 More from their sushi menu 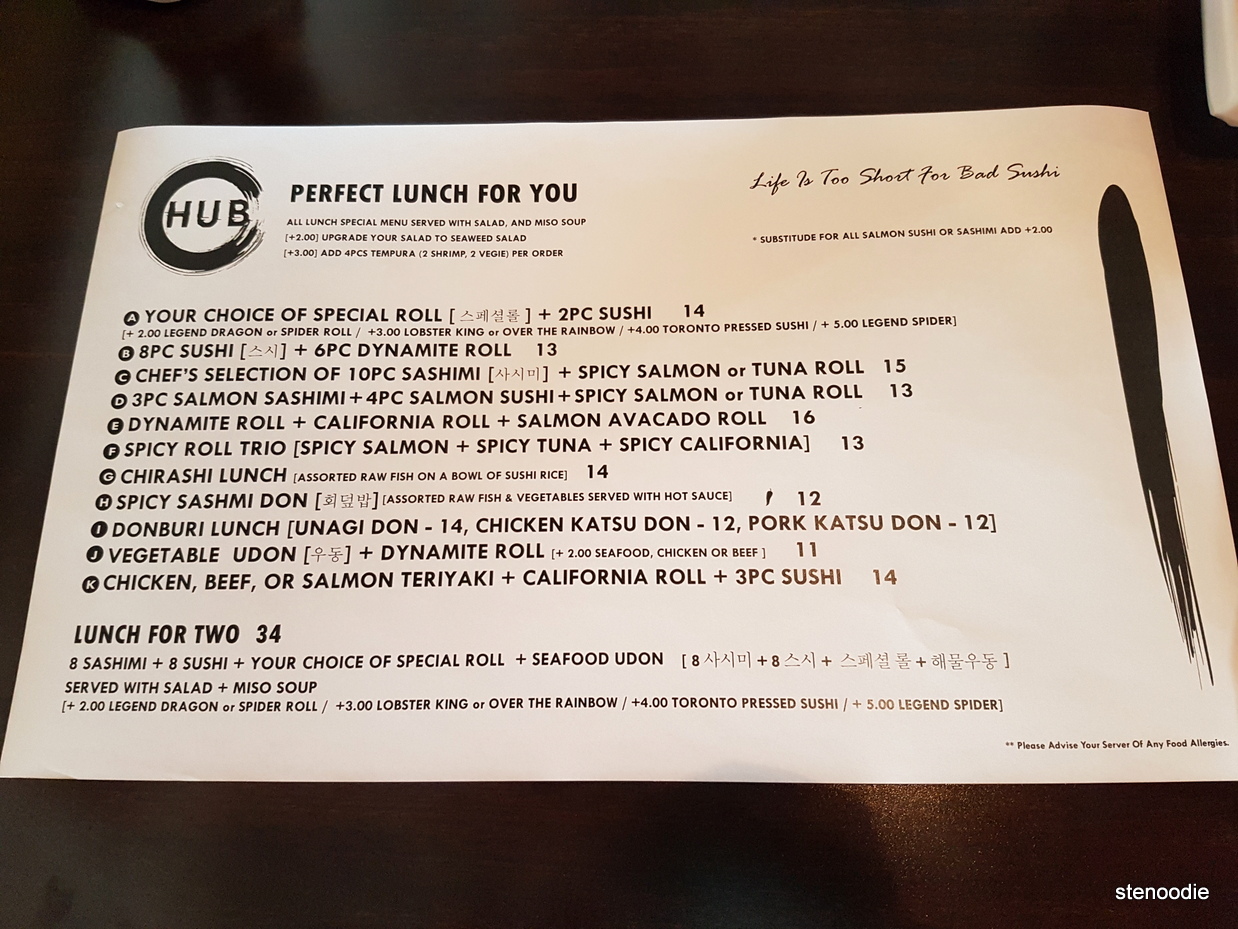 We all selected choice A where you could choose a special roll and it would arrive with two pieces of sushi.

Our salad and miso soup arrived shortly.  The salad was crisp and very fresh.  The miso soup was good. 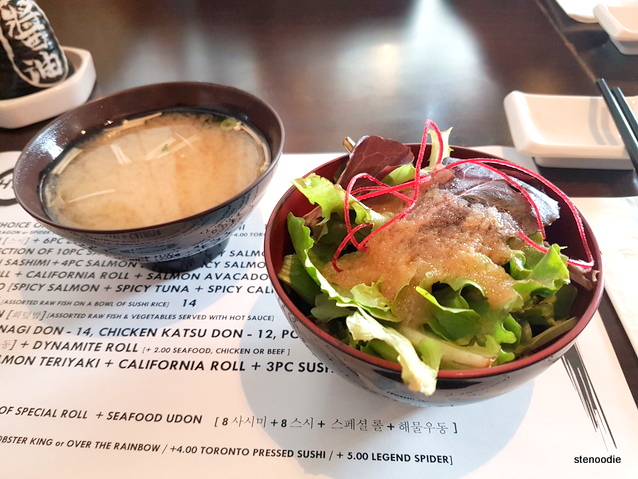 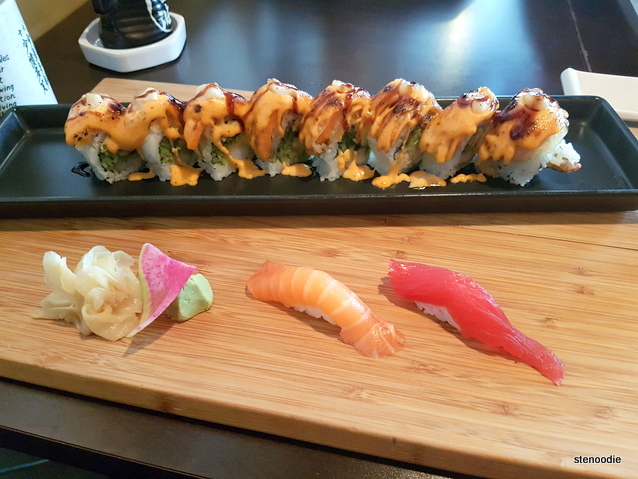 For my roll, I selected the Island Roll.  This included shrimp tempura, scallop, yam, avocado, and cucumber.  This was part of the BBQ category of their special rolls.  I really wanted a sushi roll with scallop that day but I found that there actually wasn’t too much scallop in my roll.  I think that the yam overshadowed the delicate scallop taste.  However, I really liked the spicy mayo sauce that was drizzled on top of it and for the most part, this was a delicious roll. 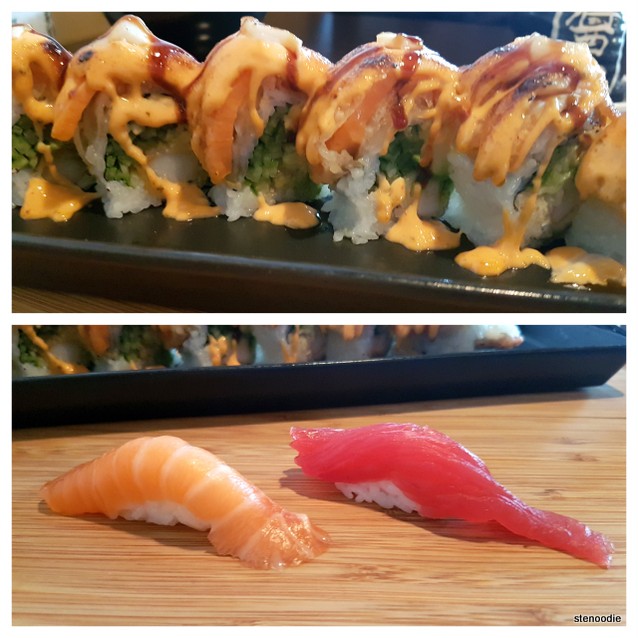 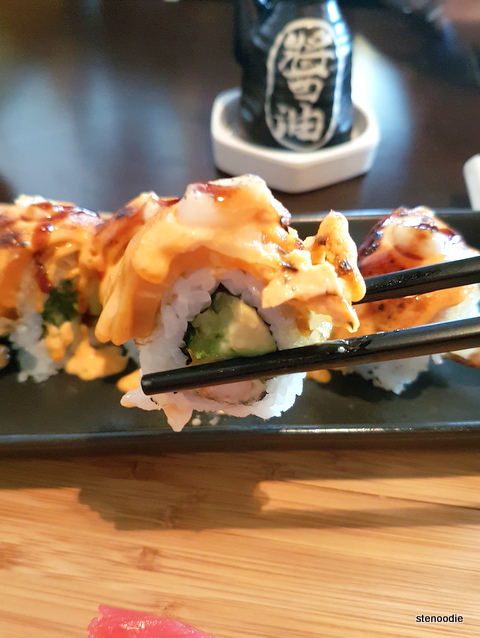 Kim ordered the Lobster King Roll, also part of the BBQ category.  This included lobster, avocado, yam tempura, asparagus, salmon tempura, and cucumber.  It was a massive roll and when I tried one, I couldn’t even fit one into my mouth!  I had to eat it in two bites. XD  While this roll was also full of ingredients, I couldn’t taste much of the lobster in it. … 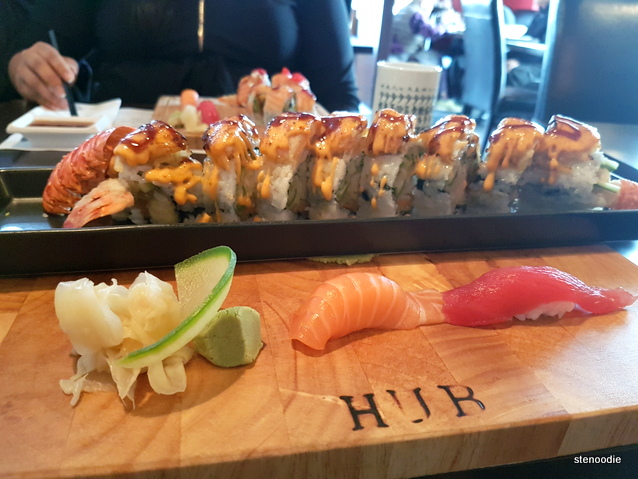 Clarissa ordered the Washington (Red Dragon) Roll from the Raw category.  Hers included shrimp tempura, salmon, avocado, cucumber, and tobiko.  This was a roll that wasn’t as loaded with ingredients as my roll or Kim’s but it was still really delicious.  I might have even preferred this one more since the flavours of each ingredient really shone without too much other things overshadowing the taste. 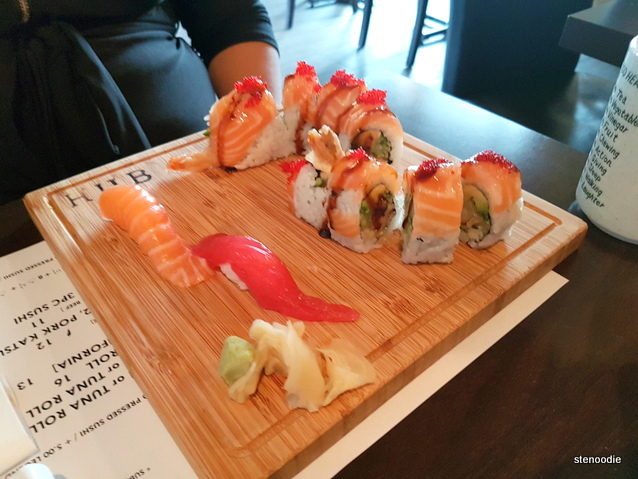 The two included sushi pieces were one of salmon and tuna.  It was pretty good too.

I would love to return again to try more of their special rolls, especially from the Raw category because I think I ultimately prefer raw sushi rolls instead of the BBQ ones.  Everything looked so good in the photos and just trying one entire roll and one of two others weren’t enough for me on this visit to really try out this restaurant.  Their prices were also very reasonable and the service was great!  The server didn’t intrude on our lunch but came by often enough to refill our teas when it ran low.   She was friendly as well.