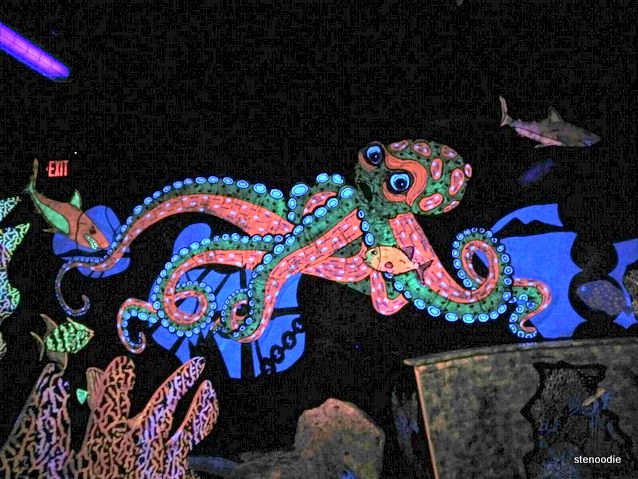 Other than the brief mini golf course that I had played on the Norwegian Getaway cruise last year, I had never been to a mini putt golf course before!  I was really excited to try it out.  Ken and I went to Putting Edge in Vaughan on Saturday and it was a lot of fun.  It was a glow-in-the-dark miniature golf course with 18 holes.

The building itself for Putting Edge was very nondescript but inside, it was a colourful neon world with an arcade in the lobby for kids to play in.  Using the tickets won from the arcade games, you could also redeem them for various prizes found at the reception desk.  I believe there was a birthday party going on while we were there so this would be a cool place for a kid’s birthday party.

After we put our coats away on the complimentary hooks and locked up my personal belongings (they have rental lockers for $1), we received our mini golf clubs and chose a golf ball in the colour of our choice.  We also got a glow-in-the-dark bracelet to put on our wrists.  We were asked if we wanted to keep score and got a small sheet of paper with a pencil to do so. 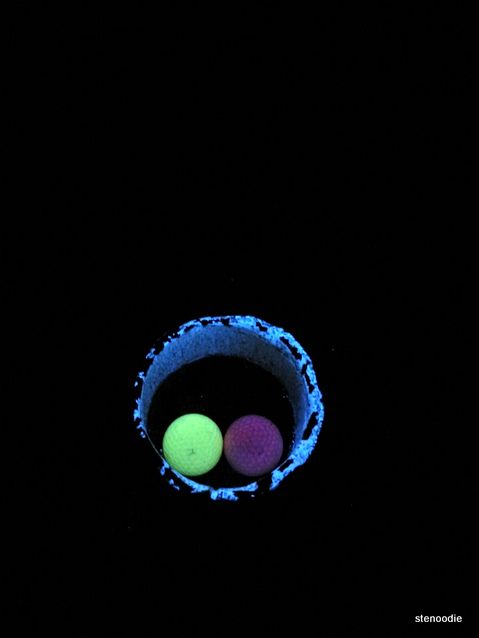 Ken took this cool shot of the golf balls in the hole. I thought they looked like fish balls the entire time XD = made me hungry

Then, we entered the world of glow-in-the-dark golf course!  It was extremely well made inside with lots of detailing in the design and set-up of the 18-hole course.  The themes were ocean, jungle, and outer space.  There were a fair number of people playing here too; I was surprised.  But it worked out perfectly that once we moved on to the next course, the people in front of us and behind us advanced too.  We didn’t have to wait much or at all to play the next course.

I thought it was really creative how the golf course extended into the second floor that incorporated the space theme while the lower floor was the ocean theme.  The “mouse trap” contraption for one of the courses was so creative; that was how the golf ball moved from the upper level back down to the lower level.  The last hole was also smart because it ensured that all golf balls were returned to the facility.

The entire venue was very other-worldly and looked really great since everything was glow-in-the-dark.

It felt like a really fast activity but we were done the entire 18-hole course in about an hour’s time.  We had a lot of fun too. 🙂

3 Responses to Putting Edge in Vaughan