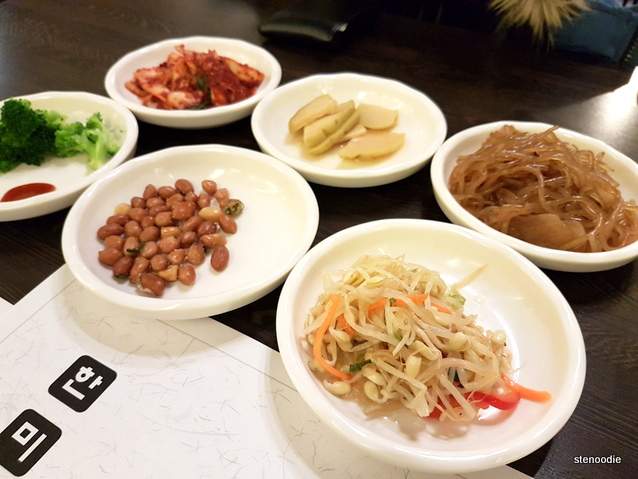 January 17, 2017:  We had dinner at Han Mi Jeong Korean Restaurant this past Tuesday.  Han Mi Jeong is located inside the Richlane Mall on Leslie north of 16th in Richmond Hill.  I had always wanted to try out this small Korean restaurant after passing by it in this mall.

There weren’t too many people here on a night with a freezing rain warning.  The staff seemed to be Korean and there was a Korean show playing on the TV. 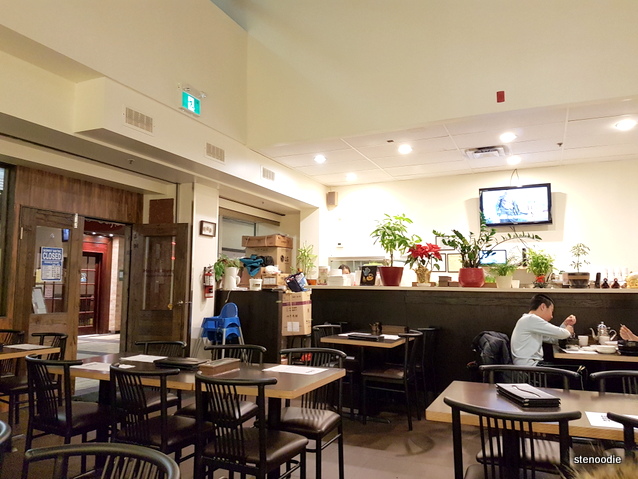 Open space inside the restaurant 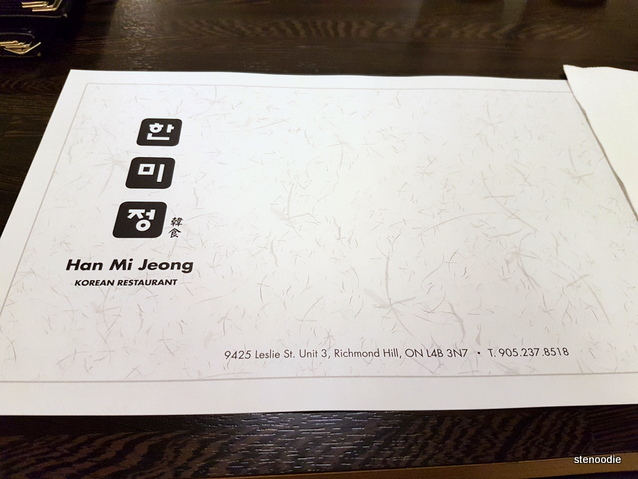 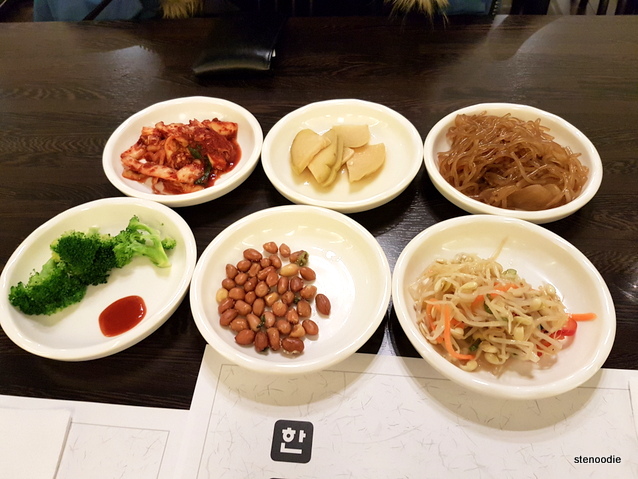 I ordered a classic Korean dish, the Bimbimbap with Beef while Ken ordered the Gamjatang.  There were six types of banchan served — kimchi being a common one but the broccoli and pickled pear were out of ordinary.  The banchan was pretty good.  I especially liked the vermicelli one.  Their kimchi was spicy enough which was a good thing.  I also liked their bean sprouts; they were salty enough for my taste. 🙂 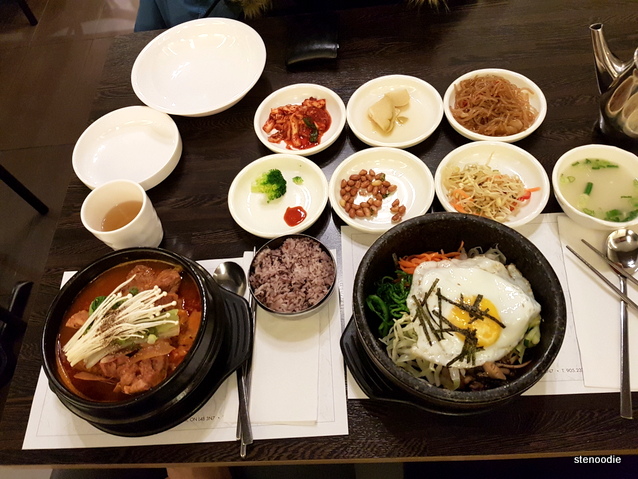 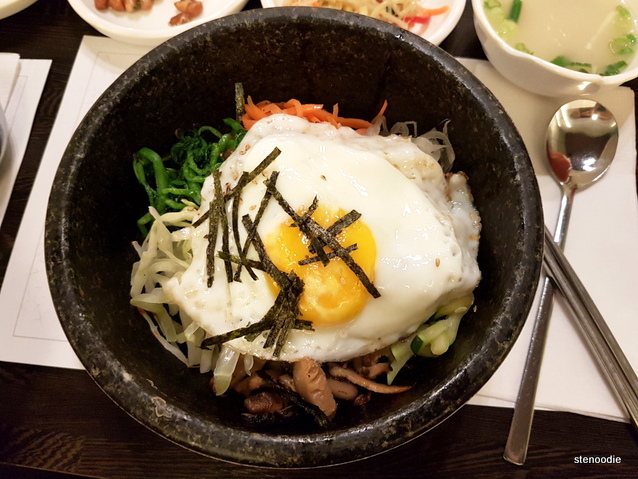 My Dolsot Bibimbap arrived with a clear soup with green onions in it as well as a bottle of spicy paste for me to add to the hot stone bowl as needed.  I mixed all the ingredients (assorted vegetables like carrots, mushrooms, spinach and fried egg) together and the purple rice that came with it (usually white rice is served in a bimbimbap).  The bibimbap was good.  I wish there was a little more beef in it though and I thought that I could have eaten a little bit more.  The portion might have been a little small for someone else. 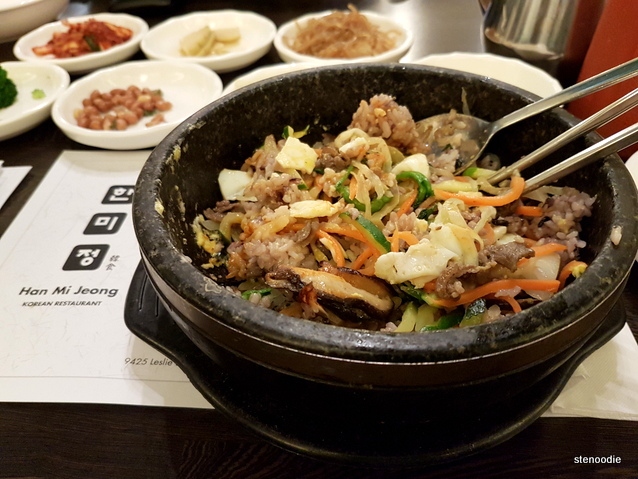 What my bibimbap looked like with everything mixed up together. Yum!

The Gamjatang smelled so good and I really liked the spice level of the soup as well as how smooth the pork meat was.  Yum! 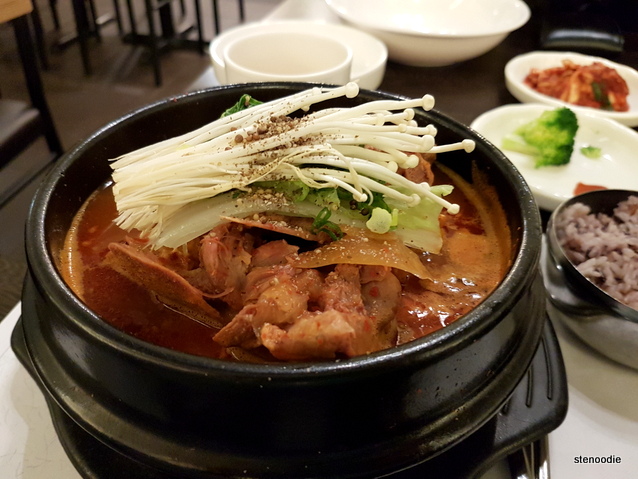 The prices were reasonable here and I wouldn’t mind coming back in the future to try some more dishes. 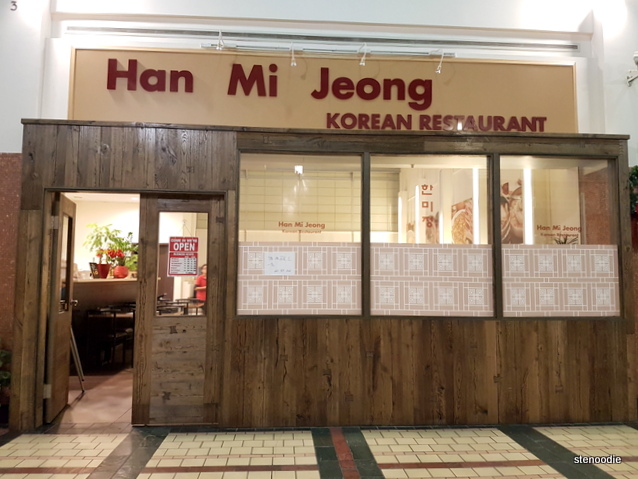 Their storefront inside the Richlane Mall

My mom and I came here for dinner around 7:30 p.m. on a Sunday.  We were lucky because as soon as we walked in and got a table, the customers after us had to wait for a table.  The entire restaurant was packed with (mostly) families enjoying a nice Sunday dinner.

We received the usual banchan dishes.  I thought everything was quite mediocre (and I actually avoided eating the kimchi and spicy ones due to me wanting to avoid spice lately).  I like the vermicelli though. 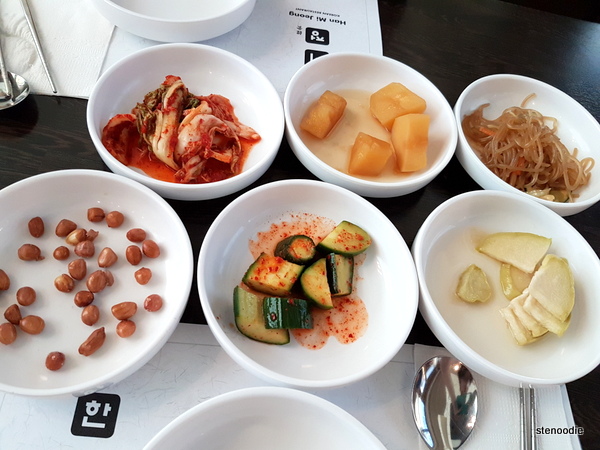 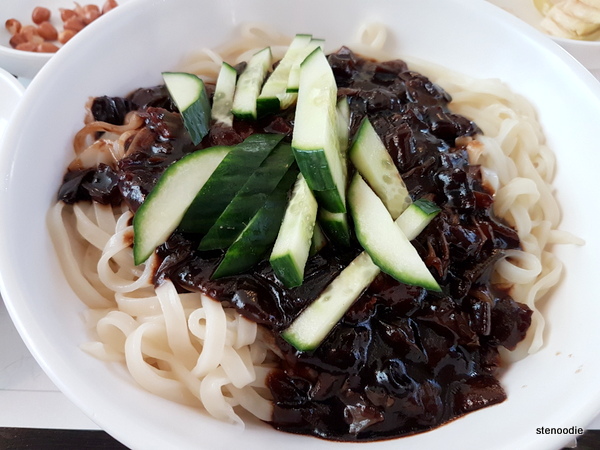 Jajangmyum. $10.99
-noodles with black bean sauce with pork and vegetables

The Jajangmyum (noodles with black bean sauce with pork and vegetables) was so-so.  At the time, I thought it was one of the worst Jajanmyum I’ve ever had because I felt like the noodles were too thick and doughy and weren’t the right ones for this dish.  The black bean sauce was not bad.  There were barely any pork pieces within the dish.  However, the portion was huge!  There were so many strands of noodles in the bowl.

When I took it home later as leftovers for the week, I enjoyed it better.  (However, I still have to say that the downtown Korean restaurants prepare better Jajangmyum.)

The Jampong (spicy noodle soup with assorted seafood and vegetables): 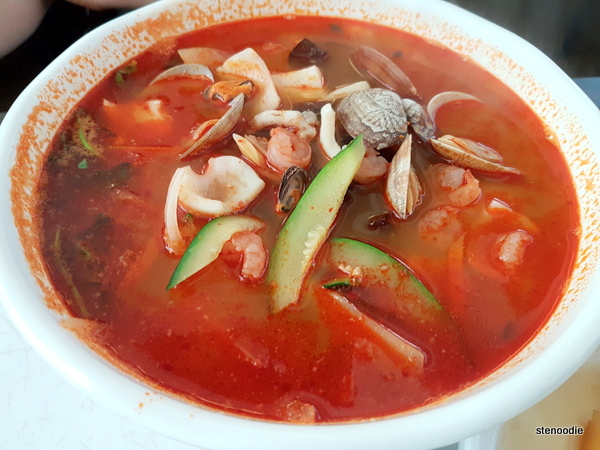 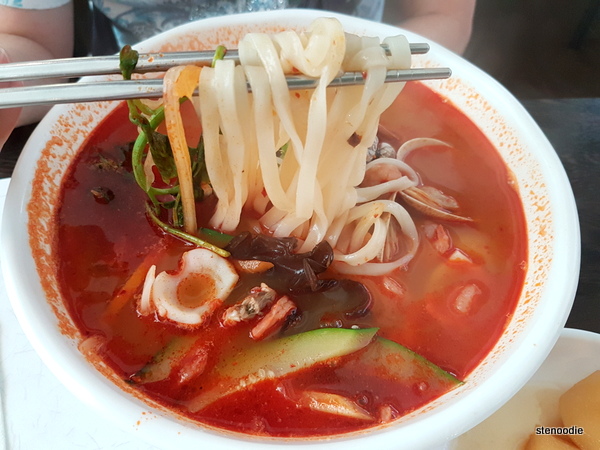