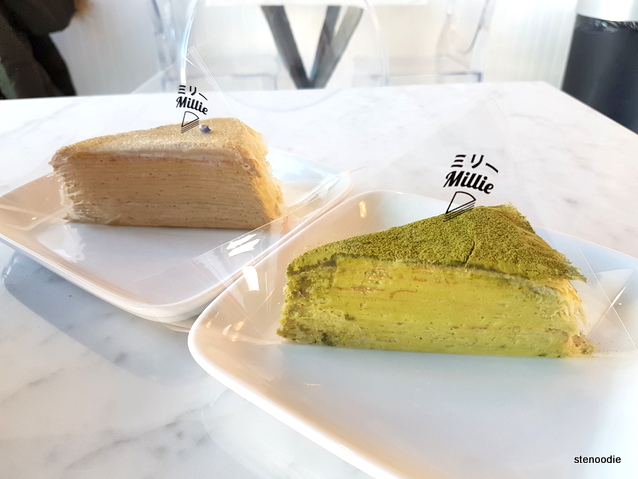 After our brunch at Alchemy Coffee just a couple of minutes away from Langham Square, Priscilla and I went to Millie Café to try out their infamous Mille Crêpe cakes. 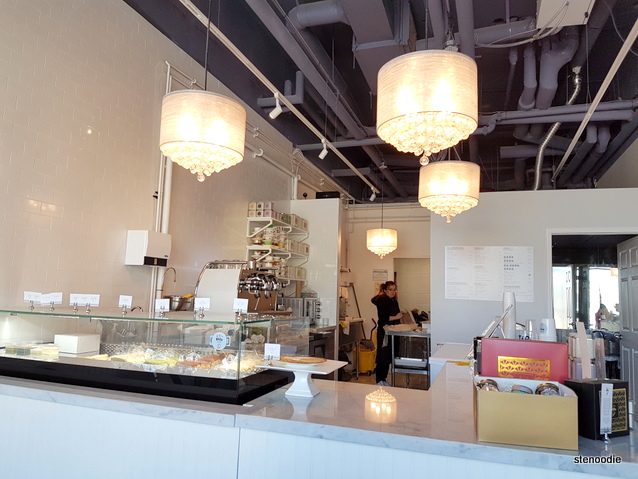 Upon walking into the standalone retail unit (the cafe is not inside the Langham Square mall but outside near ZenQ, Morals Village, and T-Swirl Crêpe), I immediately noticed that they didn’t have the rainbow Mille Crêpe cake at all.  I inquired about it to the girl working at the counter and she said that it had been discontinued for a while now.  That was disappointing since I had thought that that rainbow Crêpe cake would have been a permanent fixture to the Millie Cafe family.  In any case, Priscilla and I were still content to order two of their other Mille Crêpe cakes to try (they had four signature flavours: Earl Grey, Matcha, Tiramisu, and Vanilla Bean). 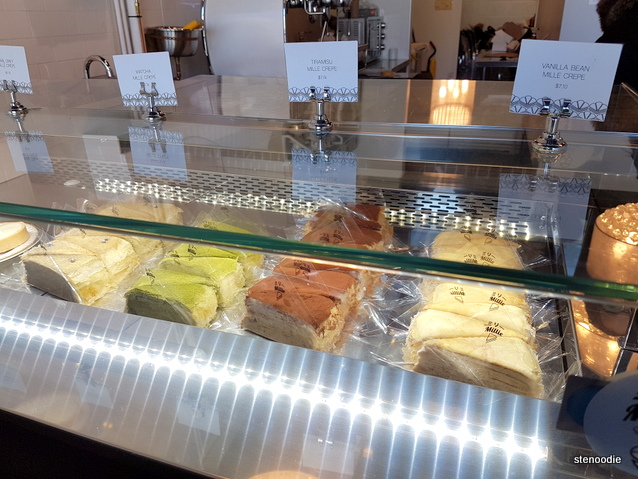 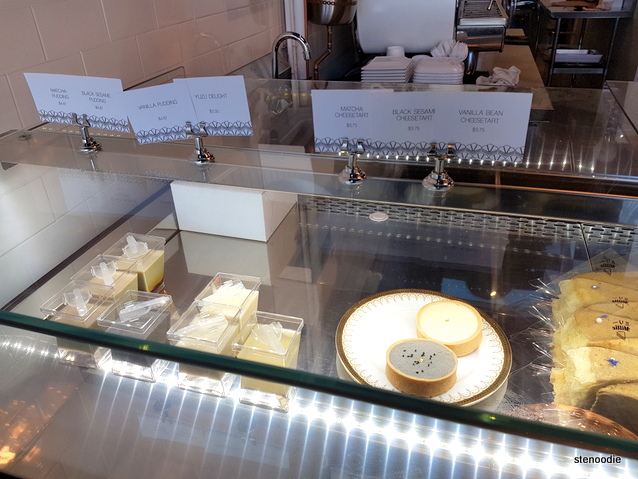 We ordered one slice each of the signature Matcha Mille Crêpe cake and the Earl Grey Mille Crêpe cake.  They also had cheese tarts and puddings available in the same display refrigerator for sale.

When paying for the desserts, we were asked if we wanted to try the gelatos that were made in-house.  We tried the Khao San Road Thai Iced Tea one and it was velvety smooth and tasted like red iced tea.  I asked about the name of the gelato and it turns out that Millie Cafe has partnered up with the well-known Thai restaurant, Khao San Road, to create the unique gelato flavours. 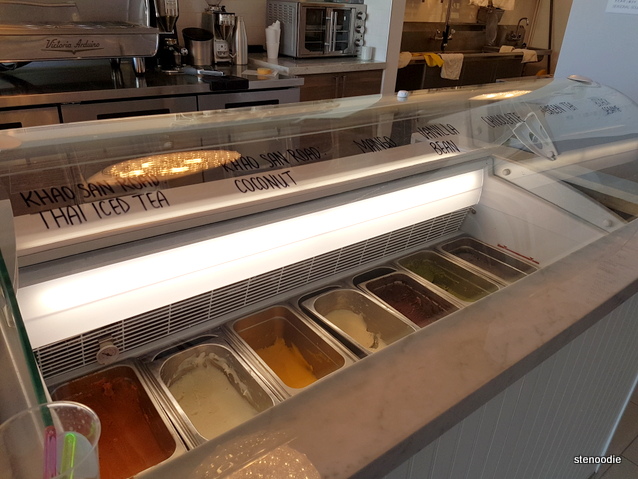 We sat down at one of the tables to enjoy our Mille Crêpe cakes.  The layout of the dessert shop allowed a few tables in a clean and minimalistic design.  (By the way, their restroom is HUGE!) 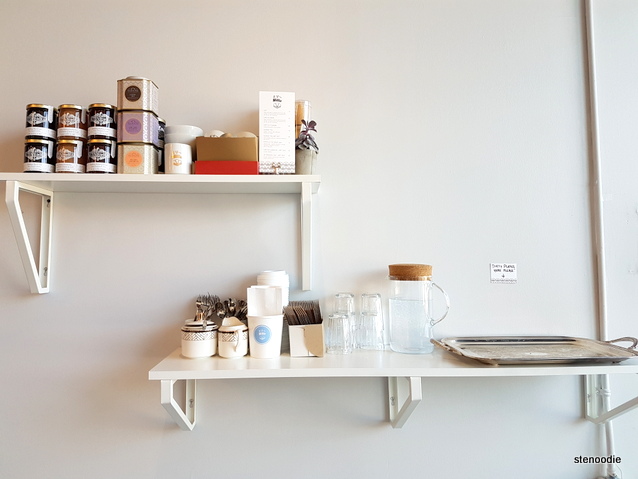 I liked the minimalistic design 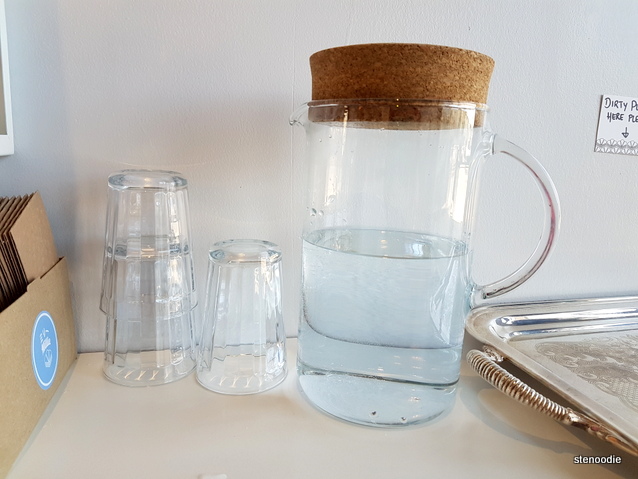 I thought this corked water pitcher was the cutest! However, it was difficult to pour water out of 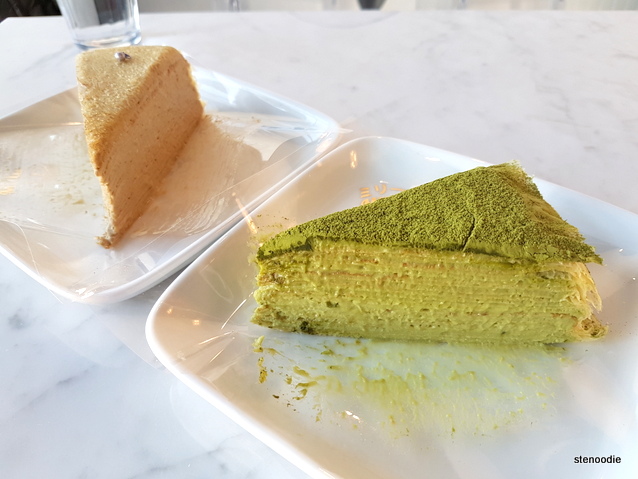 You can tell that the pastry cream has been melting against the plastic sheet..

The first thing that I noticed upon peeling off the plastic sheet that wrapped around each slice of the cake was that the pastry cream between each crepe layer was already melting and mushed up.  I was not impressed about that.  I remember that the Mille Crêpe cakes at the Kensington Market location were kept inside an air-tight fridge and that paper sheets were used to separate each slice.  Perhaps by using plastic in a not-so-airtight refrigerator, the pastry cream had managed to melt.  In other words, I think that their refrigerator is not cold enough! 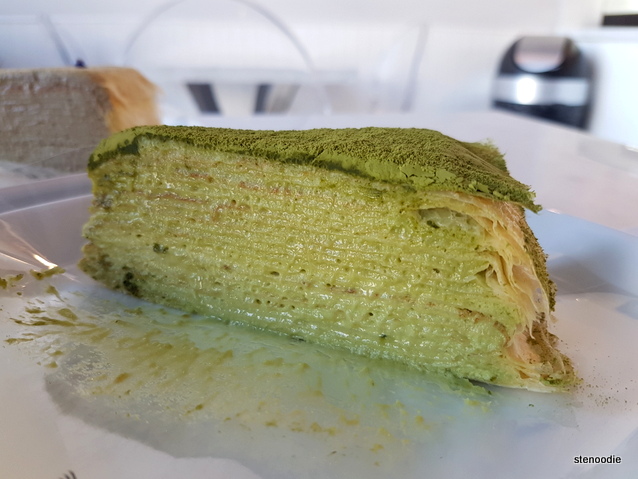 Taste-wise, the Mille Crêpe cake still tasted good.  However, I thought that the size of the cake was smaller than what I had had before.  The price was also slightly higher than that of its downtown counterpart. 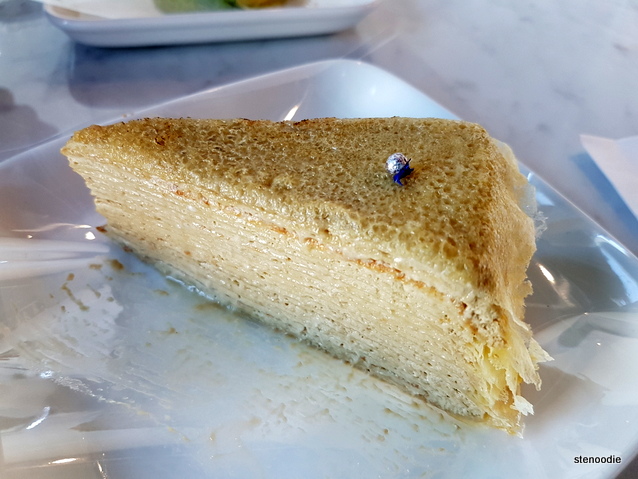 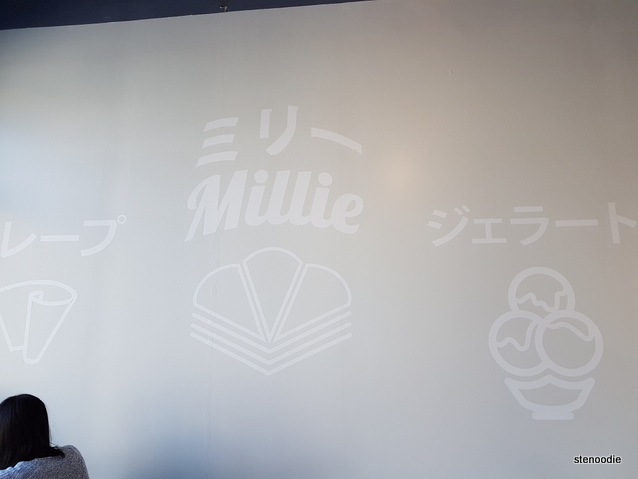 Logo on the wall 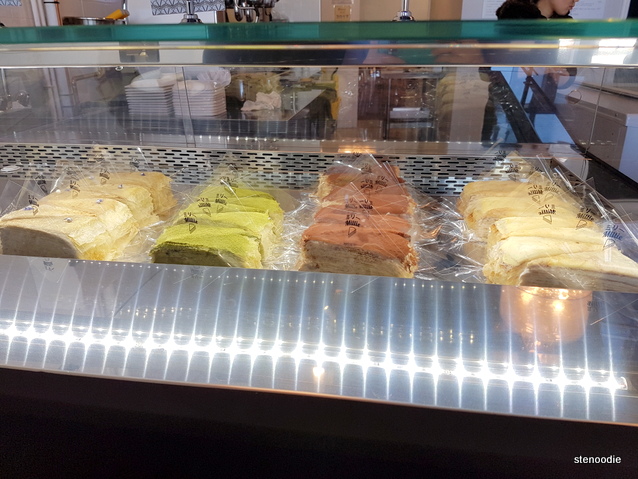 In this photo, you can see a noticeable gap between the two panes of glass. Perhaps this is the reason why the cakes weren’t kept chilled enough 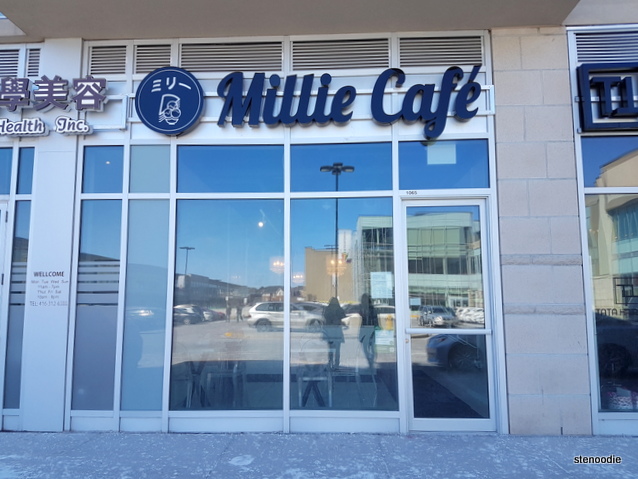