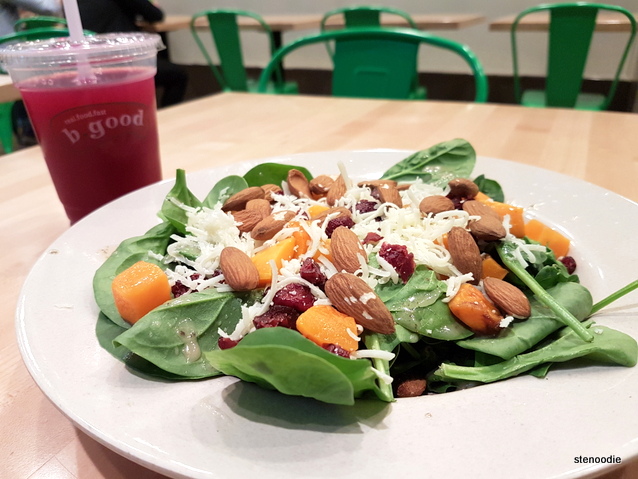 Thanks to Grace of @moussetaco hosting a contest on instagram, I was able to win four free items to try out the menu at b.good.  Yay! 🙂

b.good is a relatively new franchise restaurant appearing in Toronto that features exclusively locally sourced ingredients.  It’s a fast casual restaurant meaning that you order your food at the counter, wait for them to call for your name, and then you can collect your items and dine in.  You can also take-out or use foodora to order food.  All of the food is very healthy, raw, and free of miscellaneous toppings or fillers.  This makes it truly clean meal where you won’t feel bogged down or yucky after eating.

On a Friday night, Ken and I went to the King Street East location to redeem my prize of four items (they also have two other locations; one on Front Street and one on Queen Street). 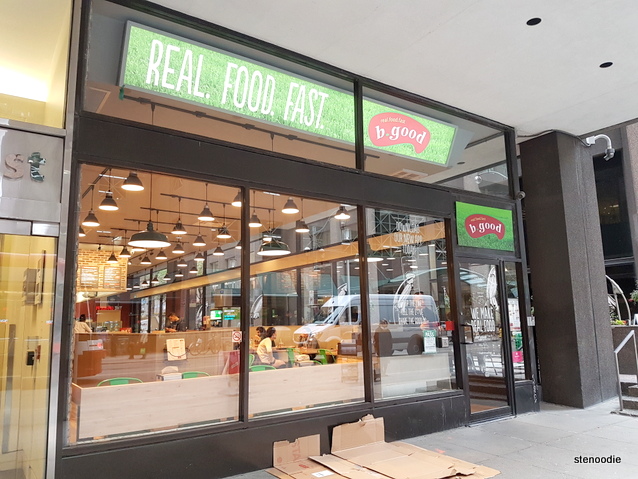 Luckily, I was able to redeem all four of my free items on this visit instead of only redeeming one at a time (which I would understand if those were the rules). 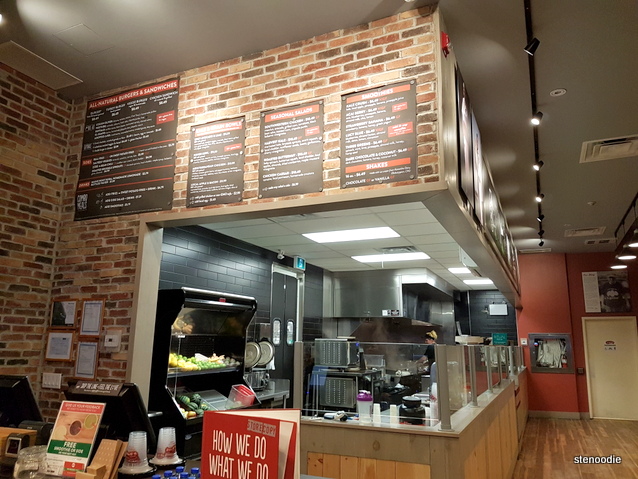 For the Kale & Grain Bowl, I chose the Mediterranean Chicken, Roasted Butternut for the Seasonal Salad, Roasted Brussel Sprouts for the Side, and Beet-Ginger Lemonade for the Drink.  We also added in the El Guapo Burger too.  Their burgers were all-natural, local, and house-ground.

The Beet-Ginger Lemonade was only a bit sweet and the ginger taste was very strong.   It was made with water, lemon juice, beets, ginger, pure cane sugar, and orange peel.  I liked it. 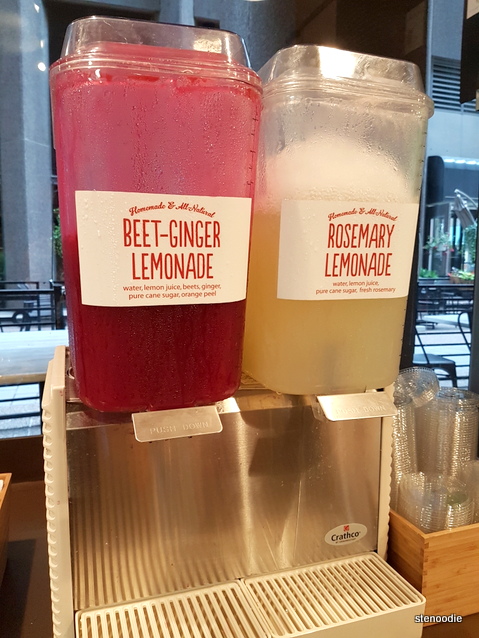 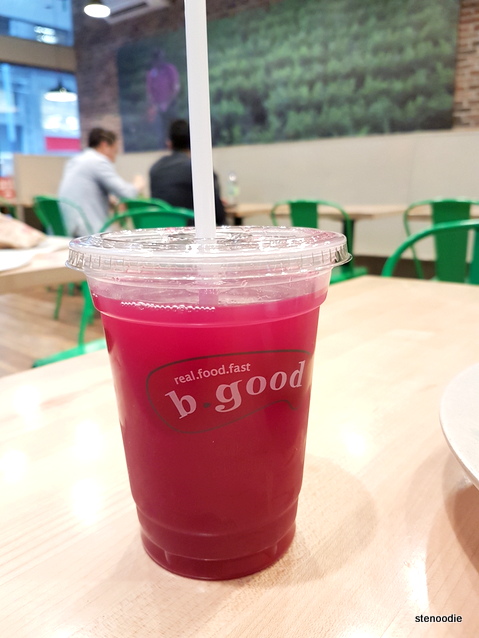 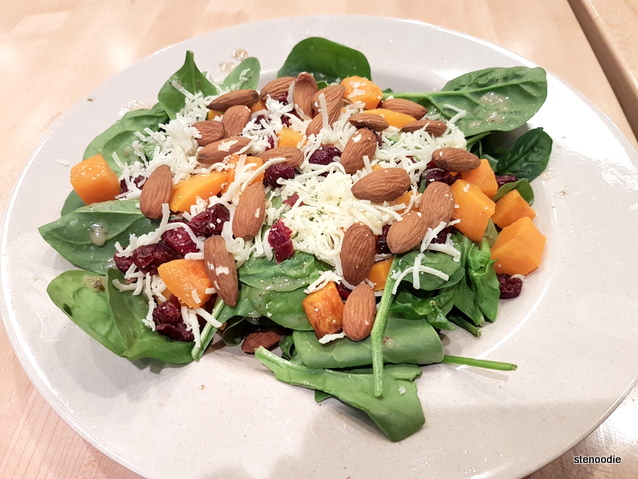 The Roasted Butternut Seasonal Salad consisted of baby spinach, butternut squash, sharp cheddar, apples, almonds, dried cranberries, and a maple-mustard vinaigrette.  This was a very clean and raw salad.  The maple-mustard vinaigrette tied everything together although it would have tasted a little too raw and dry.  Even though this salad had cheese in it, since the cheese was locally sourced, it didn’t taste heavy at all. 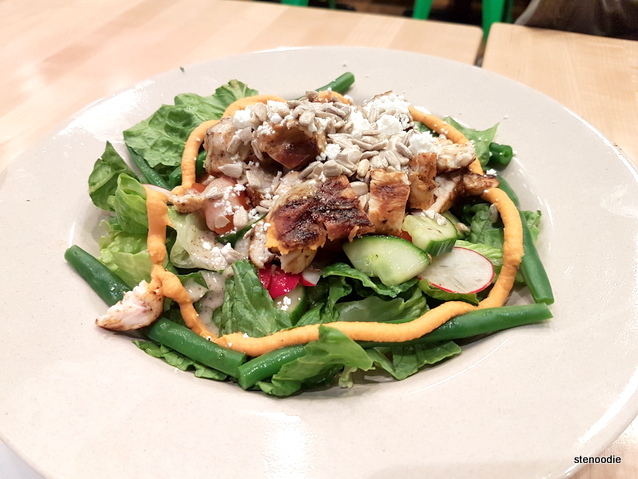 The Mediterranean Chicken Kale & Grain Bowl included romaine, grilled chicken, tomato, cucumber, green beans, radishes, feta, red pepper hummus, mint, sunflower seeds, and a za’atar vinaigrette.  The pieces of grilled chicken were pretty good; not too dry or rough in texture.  (If the chicken was even more moist or juicy though, it would have been even better.)  My favourite part of this bowl were the red pepper hummus (which was presented in a string squeezed all around the circumference of the salad) — which I wish I had more of — and also the quiona.  The quinoa was so soft and delicious!  I wish there were more of this in the bowl too.  The green beans were very fiberous and tasted like they had just been plucked out of the field. 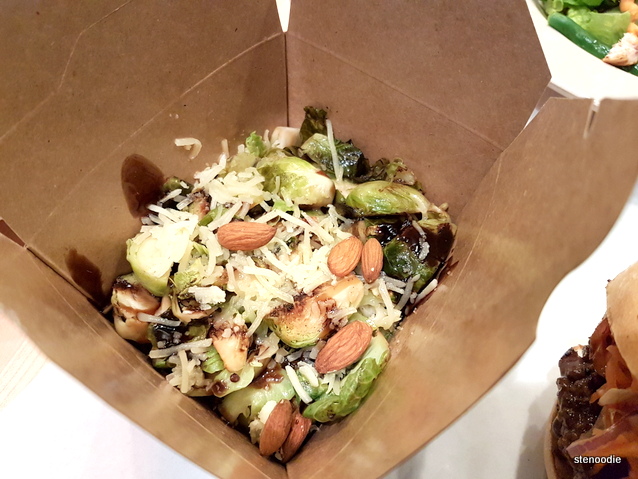 The Roasted Brussel Sprouts included cheddar, almonds, balsamic glaze, and maple syrup. It was served in a paper take-out box.  The brussel sprouts were fibrous and very raw tasting so you have to make sure you chew everything thoroughly before chewing.  I say this in a good way because it meant that the brussel sprouts were fresh and they didn’t cook it too much — the nutrients would have more staying power.  I liked the slight sweetness of the maple syrup too.

The El Guapo Burger had bacon, homemade jalapeno slaw, and jalapeno ranch.  This was my favourite item out of the five.  The burger overall was on the small side though but it packed so much flavour!  The burger patty itself definitely tasted natural and fresh.  It was soft and tender.  The homemade jalapeno slaw and bacon and jalapeno ranch’s heat and slight spiciness made it all taste so good.  There were slices of jalapeno so fresh that it was really crunchy. 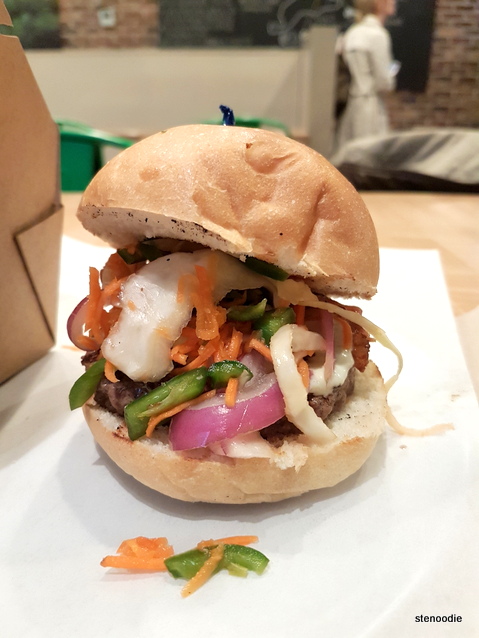 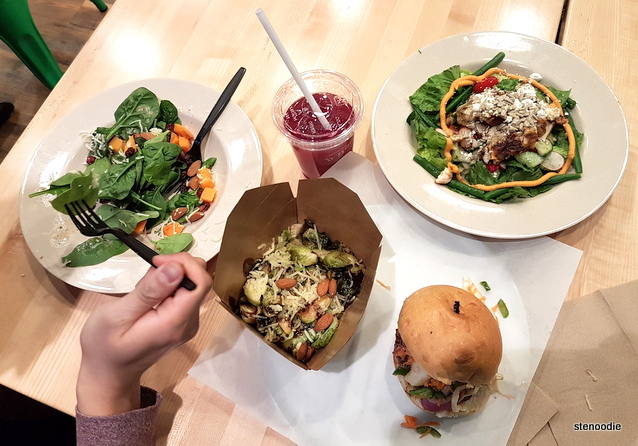 Our spread of healthy food

We had a great spread of green and healthy food on our table.  I noticed after ordering the food though that the selections were kind of similar (maple syrup and almonds on two items).  I regret ordering such similar items but at the time, these were the ones that stood out to me.  If I were to re-order again, I would have liked to try their new spicy avocado & lime or local apple & bacon salads. 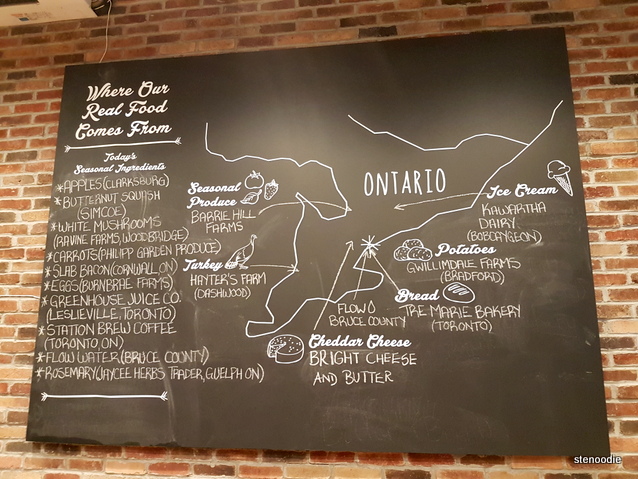 A visual map of where each ingredient comes from 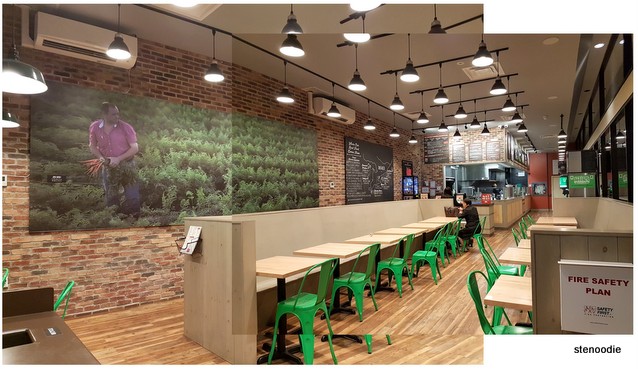 Thank you again to Grace for hosting the contest to enable me to try so many items from b.good all at once and to b.good for having an easy-to-use app to redeem the prizes too. 🙂

FTC Disclaimer:  Although b.good provided the majority of the meal free of charge via winning an online contest, the opinions expressed here represent my own and not those of the contest holder or company.