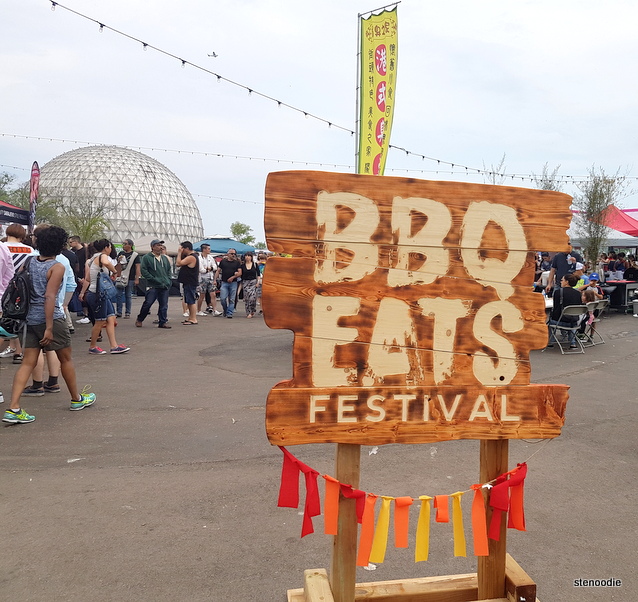 I was first alerted to this BBQ Eats Festival in early May and I even registered for the event to get two free tickets.  Fast forward to the event last weekend and I found out that the event itself was actually free all along and thus my two free tickets weren’t really so free at all lol.  (Upon closer reading of the description, the tickets enabled me to get into the event one hour early… entry line bypass.)

The inaugural 2017 BBQ Eats Festival was held at Ontario Place at 955 Lake Shore Boulevard West where many other big food events have been happening over the years (and nearly every weekend in Toronto during the summer it seems).  Despite that fact, it was actually my first time attending a food event at Ontario Place.  I liked the venue and how spaced out all the vendors were.  There was a really nice backdrop of the Ontario lake and the infamous dome that denotes part of Ontario Place. 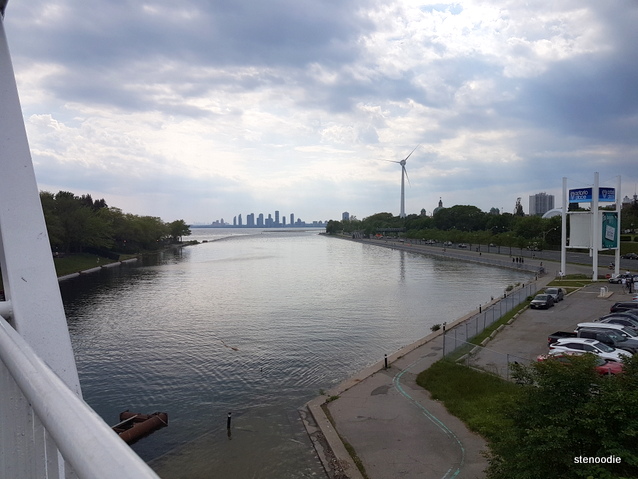 The view as we crossed the bridge into the event grounds 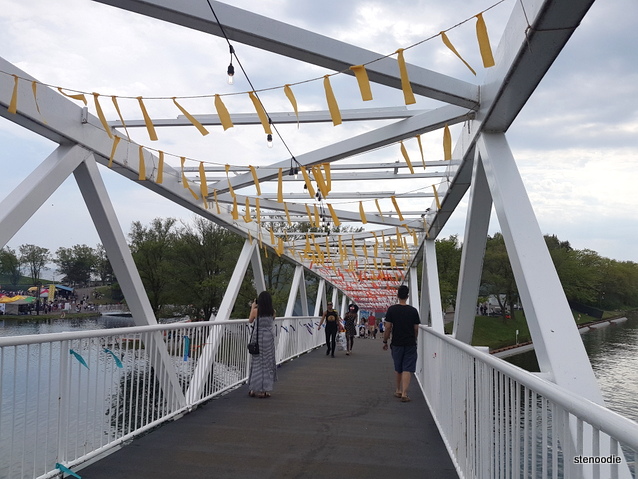 A rainbow of ribbons decorate the bridge 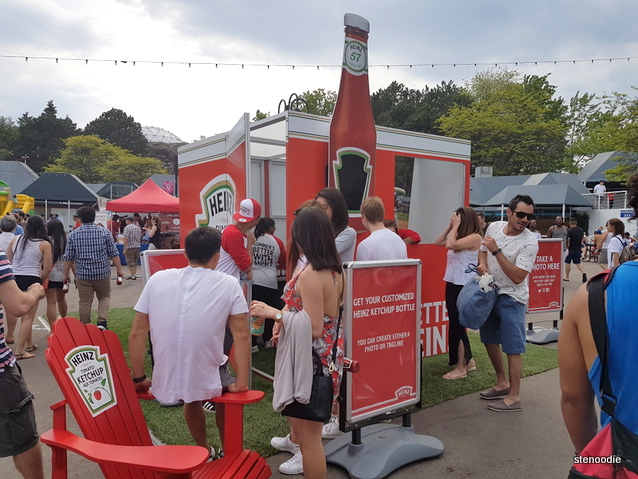 When Ken and I got there around 4:30 p.m. on the Saturday (the event was running all weekend from Friday evening to Sunday), there were a decent number of people there already.  Luckily, Ken’s friends were already in the line-up for a free customized ketchup bottle from Heinz and we were thus able to wait in line for less time to get such a bottle.  It was really neat!  They took our photo on a tablet/iPad and within a minute, we had our photo plastered onto a full bottle of Heinz ketchup to take home!  It was such a great souvenir! 😀 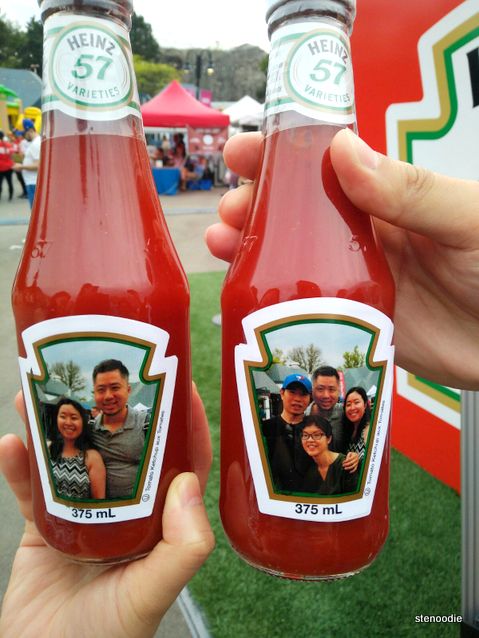 We’re on a ketchen bottle!!! XD

Kent alerted us to the fact that when you buy the food tickets from the ticket stand, the first ten were $15 while the following ten would be $10.  (It seemed like it was their way of charging admission without actually charging for it…)  Thus, we were able to get 20 tickets this way for $20 as Kent had already bought some tickets beforehand. 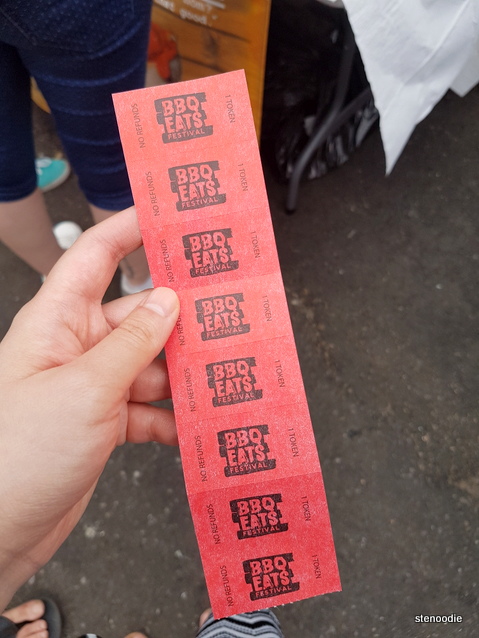 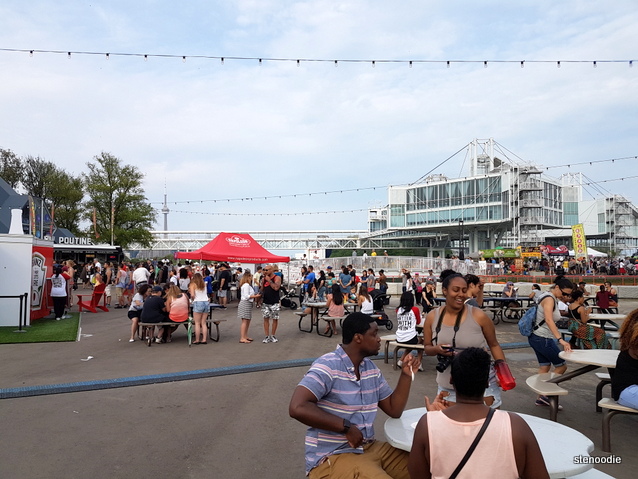 It was a beautiful day for an outdoor food event! Not too hot or windy

We surveyed the available vendors and booths at the BBQ Eats Festival first.  There were a lot of vendors there and the theme of the festival was not just BBQ but “Ethnic BBQ Flavours From Around the World.”  Hence, we actually didn’t see a large selection of ribs, burgers, and wings but also different variations of meat dishes and “ethnic” items. 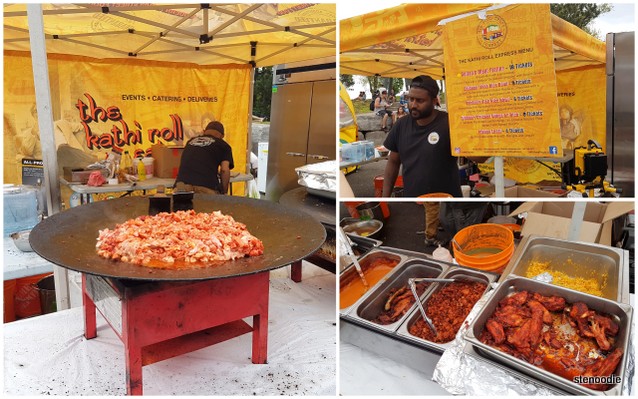 The first vendor that piqued my interest was the 416 Food Truck Company stall which had had a gigantic platter of tandoori chicken cooking in the open.  It smelled amazing and the discounted price of 8 tickets for the Sultan’s Meat Platter also sounded and looked very appetizing.  It came in a box of biryani rice, lamb kebab, chicken tikka, and a tandoori chicken wing topped with spiced onions. 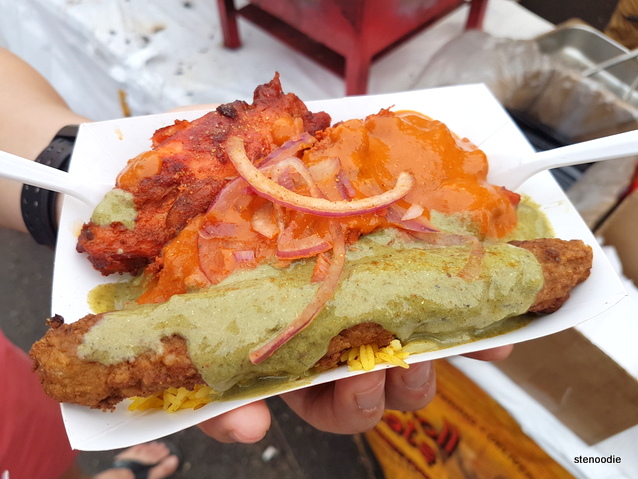 This packed quite the heat and was spicy but I enjoyed the selection of lamb, chicken, and chicken wing on the bed of biryani rice.  The lamb kebab was really soft and appeared like a tube of meat instead of pure lamb kebab.  The chicken wing was really good too. :9

We passed by Kinka Izakaya and sampled their pork cheek skewers while we finished our meat platter.  The staff at Kinka Izakaya were so energetic and certainly attracted quite a crowd with their dancing and cheering. 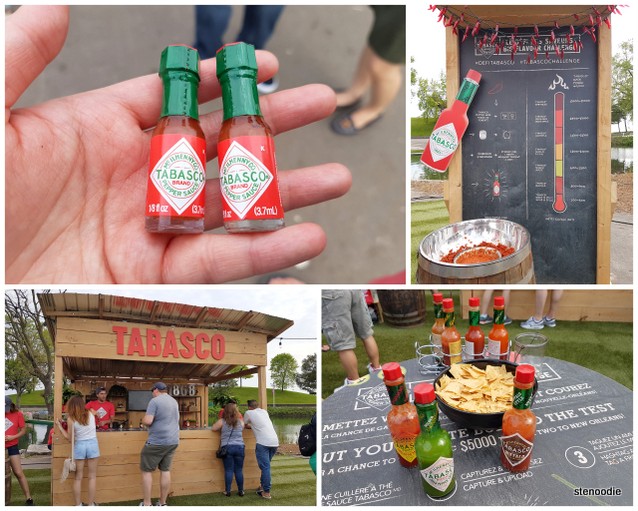 We tried the large assortment of Tabasco sauces from the large Tabasco challenge stand where there were eight different types of Tabasco sauces to sample from with complimentary nacho chips.  The one that stood out to me was the Smoked flavour and a lot of them were indeed spicy!  I tried one that was raspberry flavoured too.

I also tried the Tabasco challenge which was a dedicated pot of dry and wet Tabasco sauce (Tabasco mash puree and Tabasco Habanero).  At first, it wasn’t too spicy but the heat lingered in my mouth.  One of the representatives was nice enough to give me a Lifesaver mint to cool down the fires. XD

They gave us a mini Tabasco sauce (so cute!) to take home and some caramel popcorn as samples too.

We got a Thai Iced Tea Popsicle from Soi Thai Street Food.  It was a cute little popsicle. 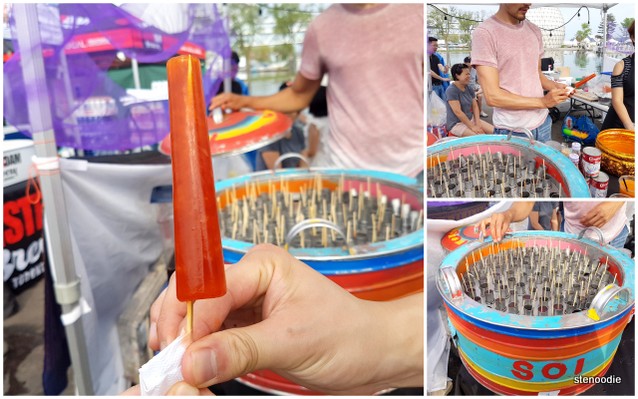 The “Bamboo Beer” (beer brewed with bamboo) was very light and refreshing! 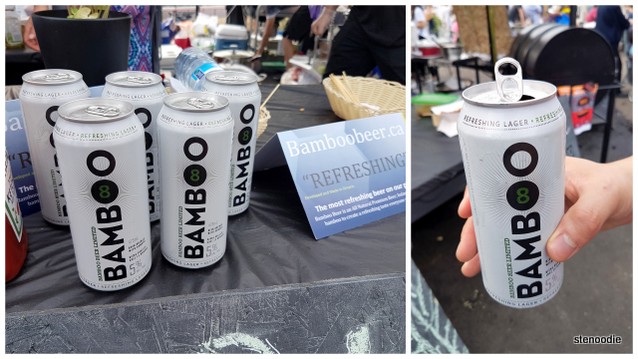 We tried the sample burgers and sausages from Mrakovic Meat & Deli and I was really impressed with how delicious the burger patty meat was!  The sausage was really good too.  We went back for seconds. 😀 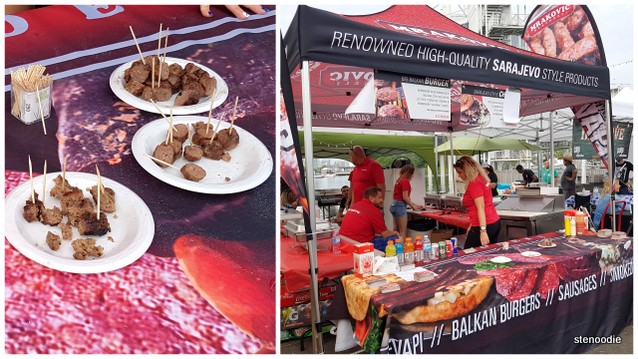 Samples of burgers and sausages from Mrakovic Meat & Deli

The ButterBeer from Pappy’s Olde Fashion Soda Pop Co. fascinated me as I had never tried ButterBeer before but after finding out that it was at a cost of 15 tickets (with the souvenir mug included), I didn’t think it was worth it.  I will have to try ButterBeer at another time. 🙂 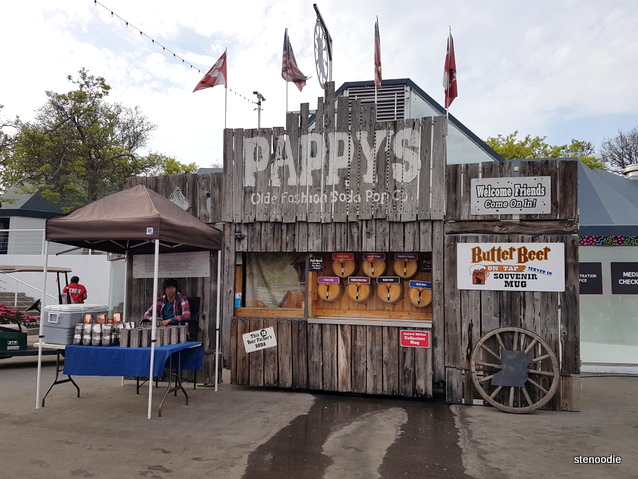 We had three tickets left so we used them on a piece of corn from Food Impression Catering Services.  It was grilled on a stand upon ordering and I liked it with butter on. 🙂  (They had run out of the cheese powder which I had initially wanted to try.) 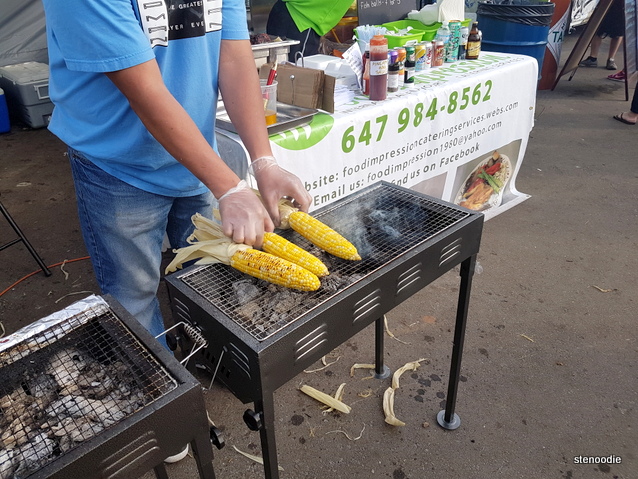 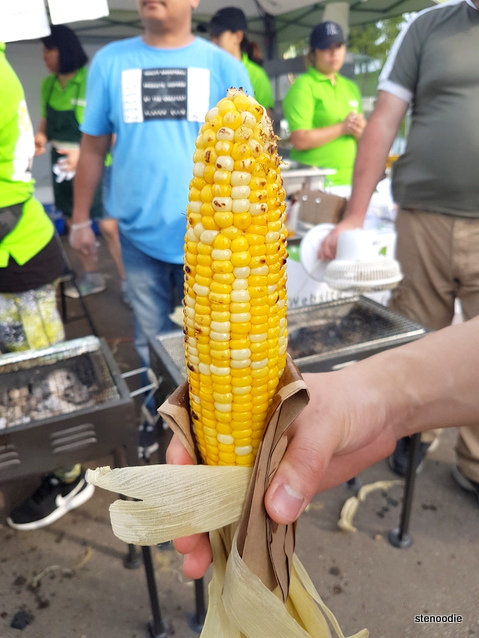 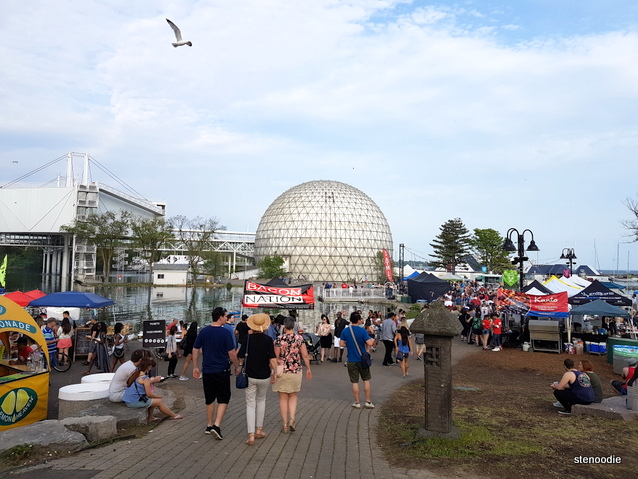 The dome and more of the event space 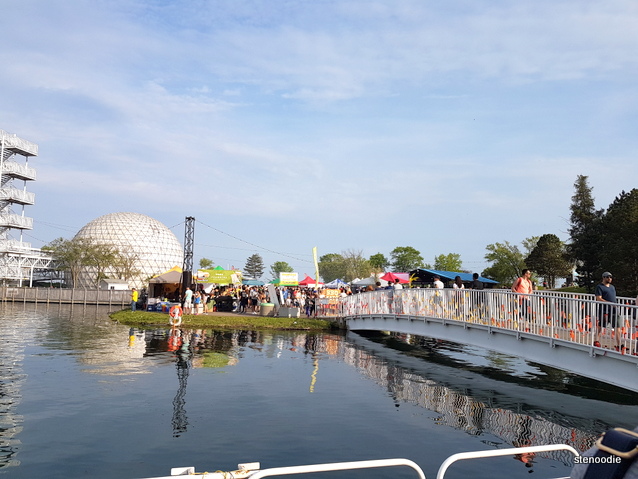 Alas, that was our first foray into the inaugural BBQ Eats Festival in Toronto 2017.  I’m really glad that admission was free and that there were a lot of vendors there.  Ultimately though, we felt like a lot of the prices weren’t exactly reasonable and a tad overpriced (it seems to be that way for many food festivals nowadays unfortunately) so spending our 20 tickets to check out this festival was more than enough.  We also would have preferred more of the ‘standard’ traditional BBQ eats like I mentioned before.  We would have liked to have seen more chicken wings, skewers (chicken, beef, lamb!), burgers, and perhaps giant chicken drumsticks or turkey drumsticks. 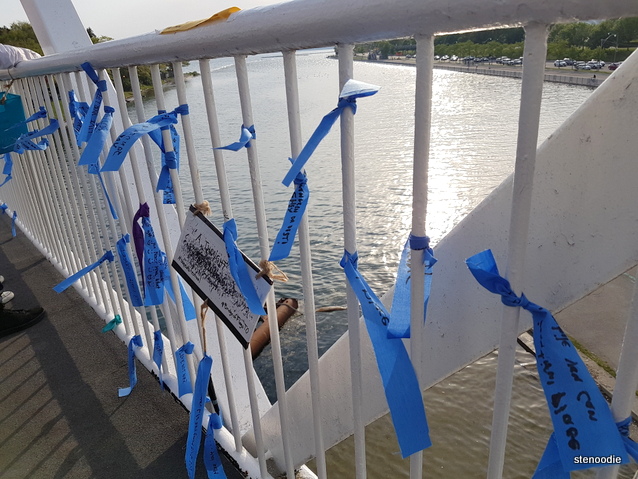 You could take a ribbon, write your favourite food or share a quote, and then tie it to the bridge

(Also, it wasn’t until after the fact that I realized that I actually could have claimed one complimentary dish from one of the vendors that day as part of a collaboration with the #jojoinstameets team.  Ah well.)