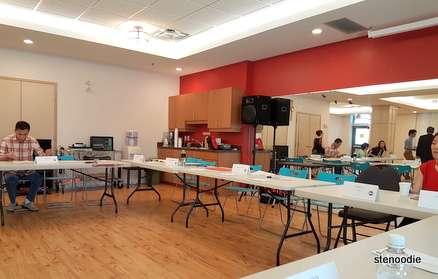 This past Saturday, I attended my first Toastmasters session!  Toastmasters is all about public speaking and speaking on the fly!

I had heard about Toastmasters a couple of years ago and had already been intrigued but didn’t take the plunge and also because I heard that there was a membership fee… or something.  Anyway, this past weekend, because it was being offered as part of a youth leadership program with a local community group, I accepted the event right away to see what it was all about.  It was free and also because I knew the community, I knew it would be much more comfortable and a venue that I trusted.

Upon arriving and seeing the agenda, I was surprised with how strictly the schedule was laid out.  Everything was slotted in terms of exact minutes and not just estimates of round minutes either.  I was provided a name tag and we sat in a rectangle formation with one side open for the speaker (a desk and a hammer were there).

The chairwoman opened up the session and officially welcomed everyone.  It was a rather formal process and between speakers, everyone addressed the hostess with “Madam Chairperson” or something similar.  It reminded me of my hearings where usually counsel members do that. XD

I immediately saw that my name wasn’t on the agenda as a speaker so I kind of breathed a sigh of relief knowing that I wouldn’t be speaking yet at this first session.  However, my guard wasn’t completely put down and for good reason too because when we got to the Table Topics section, I was picked as one of a few to speak on a random topic.  The topic of the day was ‘colours’ and each person was given a colour to talk about for 30 seconds or so.  Unfortunately, my topic was quite difficult.  I was given “grey” and I really couldn’t talk much about it on the fly.  “Grey” is just so gloomy, mundane, and a boring colour to me.  No offense to those who don’t like grey!

However, that first speaking assignment wasn’t too bad and we spent the rest of the time listening to four official speeches that were given that day and providing commentary and critique for them.  After the four speakers, there were four evalulators who then provided their evaluations of the four speakers.

After this, the Timer Report was given.  There was a Quizmaster.  There was also a segment on the “Role of Evaluator” which I found very informative.  The speaker giving this information was so thorough and had so much clarity when speaking.  I quite admired her use of precise language and public speaking skills on this topic.

Anyway, this was an interesting first experience and more will follow after next week’s actual speaking piece.  This experience definitely put me out of my comfort zone but I think it’s so necessary to keep having these experiences in order to grow and learn more.

I'm a stenographer, foodie, avid traveller, and new mom who loves to share her experiences with the world.
View all posts by stenoodie →
This entry was posted in Learning, New Experiences and tagged new experiences, public speaking, Toastmasters, Toastmasters first time, Toronto. Bookmark the permalink.