Posted on September 1, 2017 by stenoodie 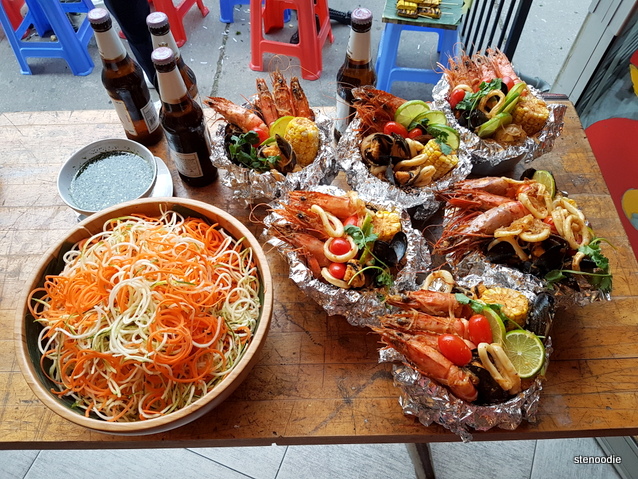 May 18, 2017:  In May, I was invited to Soi Thai Street Food by @jojoinstameets for a tasting.  Soi Thai Street Food serves exactly its namesake — Thai street food.  Their restaurant was decorated in a way that it makes you feel like you are dining on the streets of Bangkok, Thailand.

I was running a little late as I arrived to the event just after 6 p.m.  As I got there, all of the food Instagrammers were already in the process of taking photographs of the food dishes that were being served.  As it was a hot day, the large window of their restaurant was wide open and the patio was available for photography opportunities too. 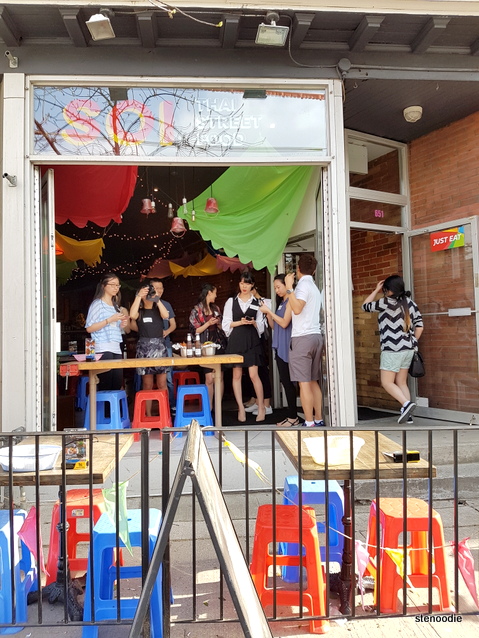 You can see all of the Instagrammers at work 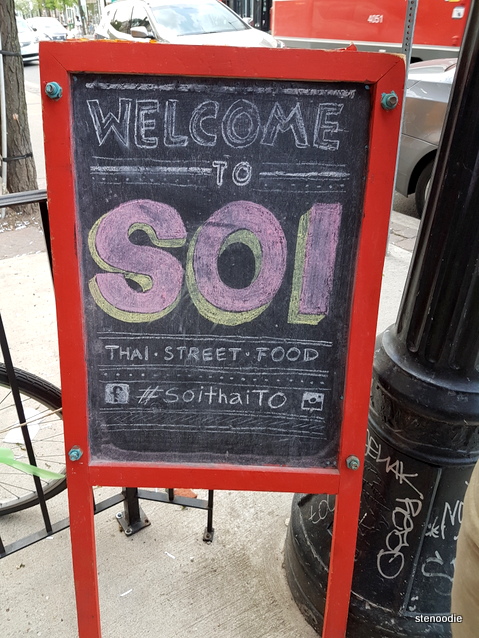 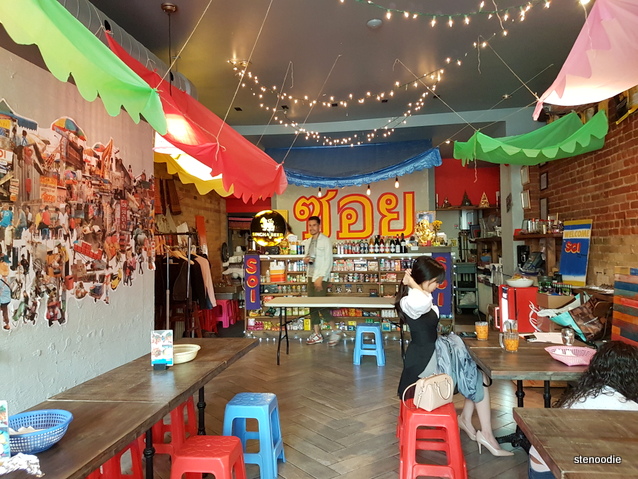 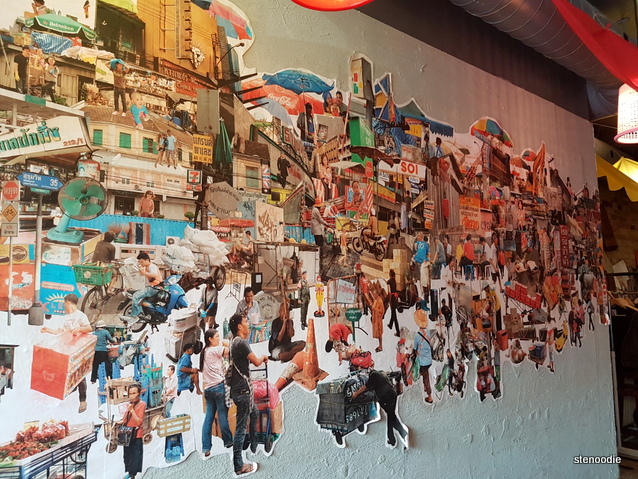 A collage of scenes in Thailand 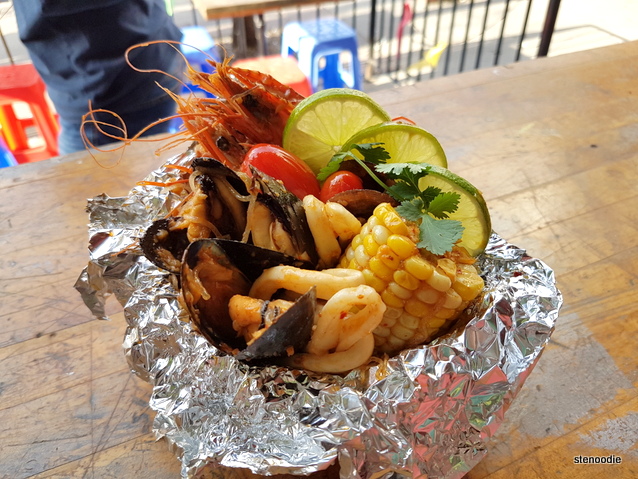 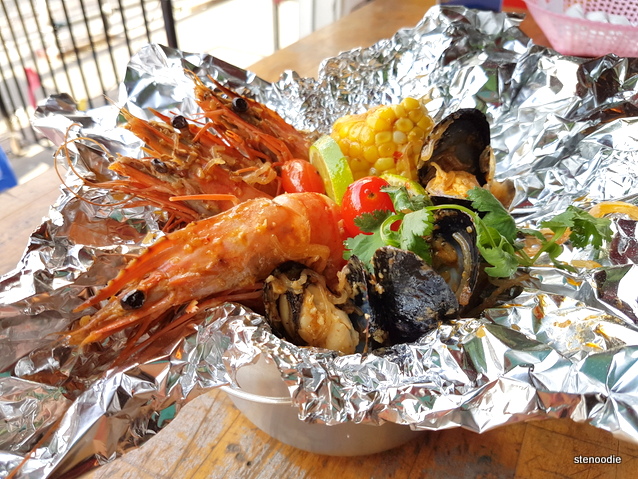 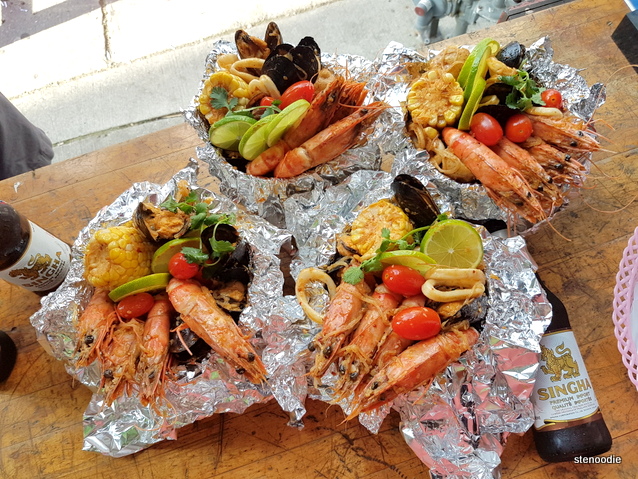 At this time, there were also three types of skewers that were brought out on a banana leaf.  They were Chicken Skewers, Squid Skewers, and Marinated Tofu Skewers.  The Chicken and Squid Skewers were marinated in gluten-free soy sauce.  Again, many of the food Instagrammers took the skewers individually outside to photograph them.  Someone even took three skewers and put them on top of a bicycle to photograph. 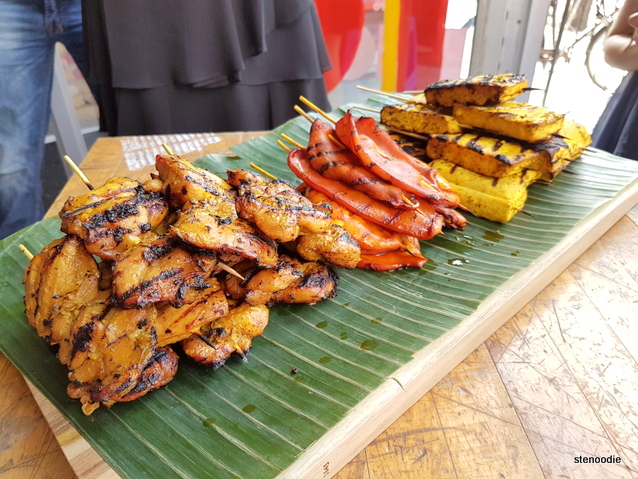 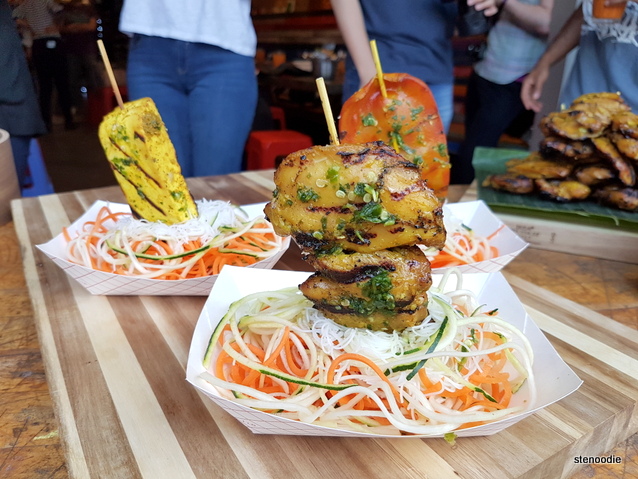 As we continued waiting and photographing, more food items were brought out on to the display table.  This included a special item that Soi Thai was going to feature at the then-upcoming The Stop Night Market and BBQ Eats Festival (which I did attend and is blogged here).  These were the three types of skewers propped up in a bed of Bangkok Slaw (vermicelli, carrot, cucumber, and radish). 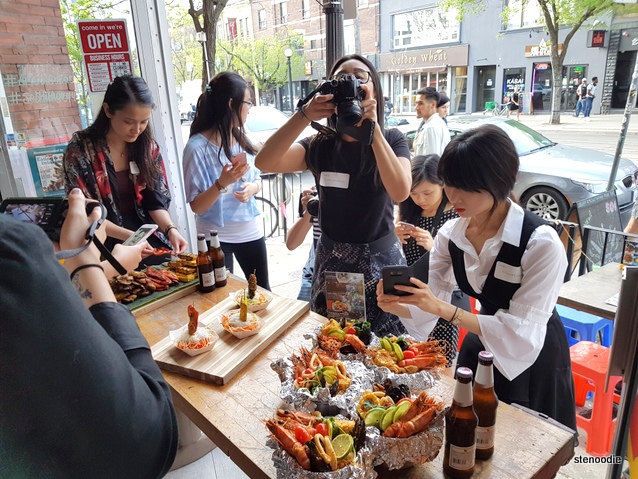 How much dust and saliva got on the food while they were being photographed?! 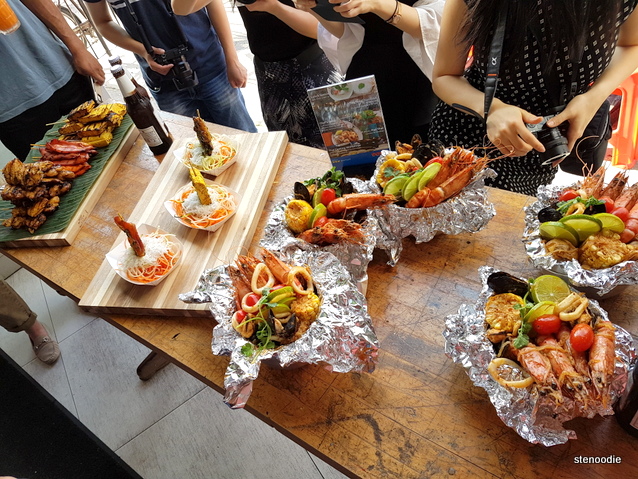 Everything was exposed to the streets of Toronto… 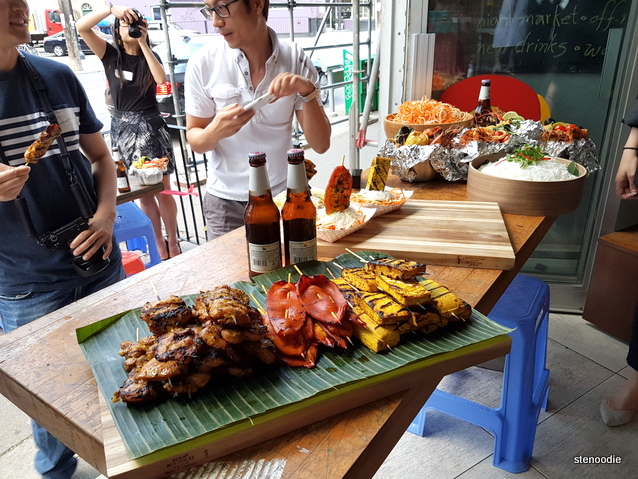 Also, three bowls of their Tom Yum Platoo soups were brought out.  They brought out a few platters of sizzling shrimps.  They also brought out their cocktails. 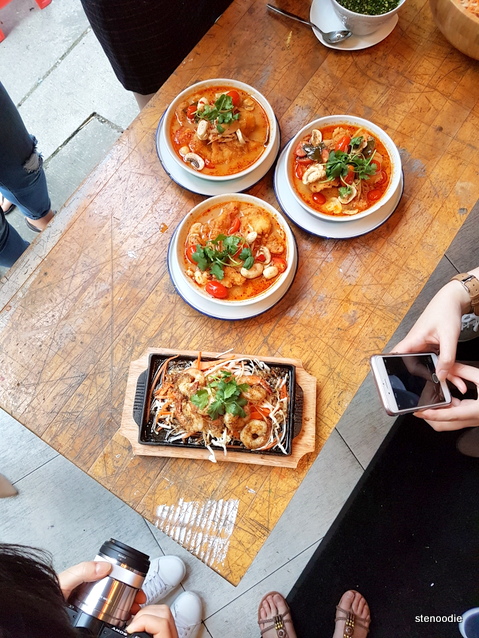 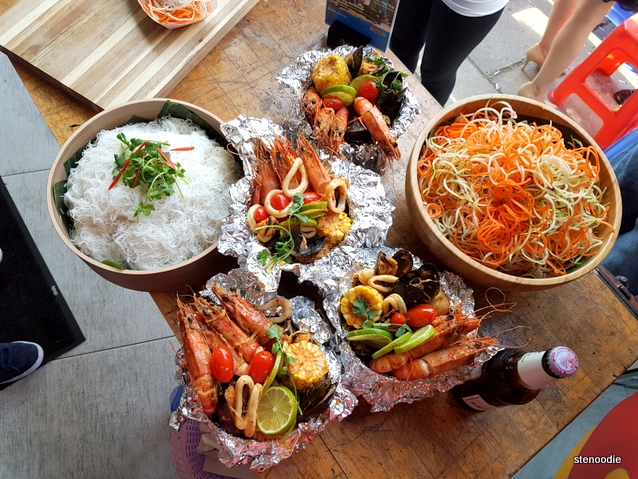 The summer promotion that they were running at the time (and wanted us to promote about) was a “Soi Thai’s Special Thai Seafood Bucket” for two for $70 that included two seafood boil pots, two Singha beers, Sticky Rice, and Mango Pops for dessert.  $70 is a lot more reasonable than the original $100 that they were suggesting.  Even then though, $70 in my opinion is a lot of money for that food…

Thus, there were Singha beers on the table too for us to photograph.

None of us got to try any Singha beers or the cocktails that were given to us for photographing.  It was meant to be a pure promotion in terms of those drinks.  I know one Instagrammer commented on this as well.  How are we supposed to help them promote their drinks if we don’t even get to try them?  In my opinion, it’s like we were being used as props to promote the items; not there as actual foodies to enjoy the food and then promote… 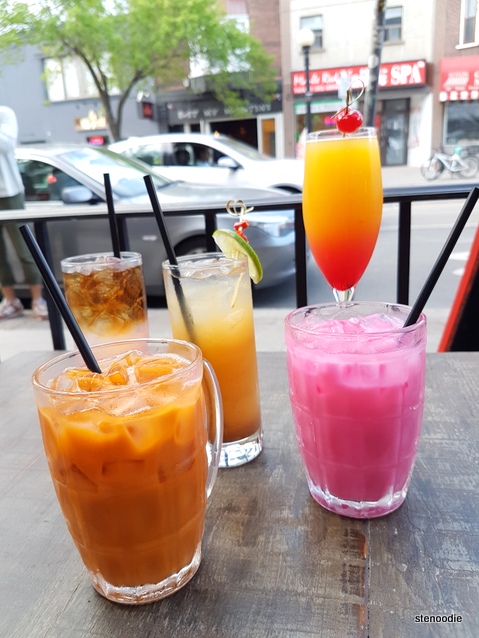 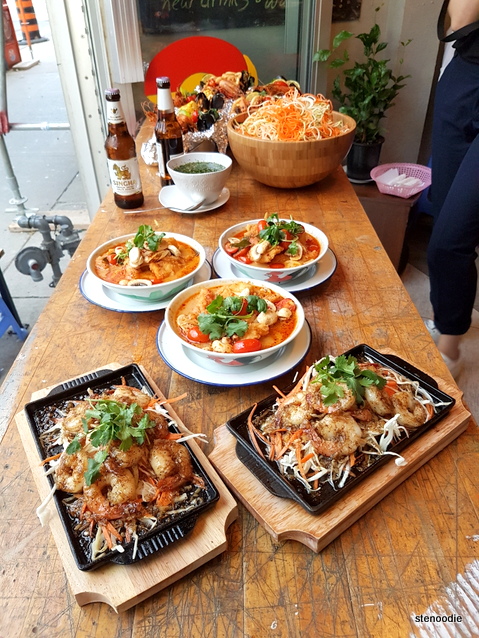 It was a beautiful food display table for sure 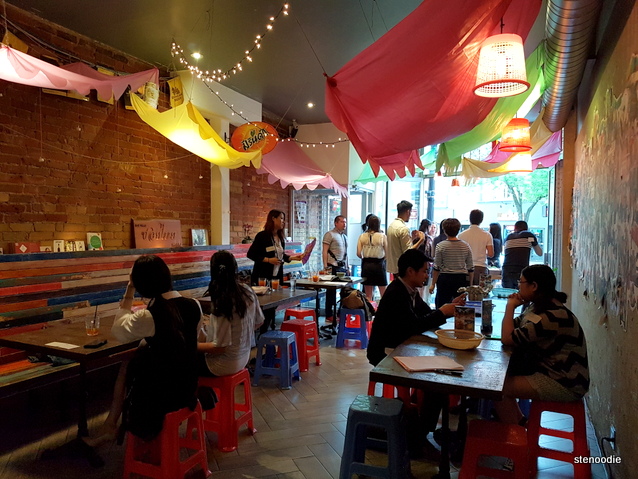 Waiting for them to finish taking photos so we could eat… 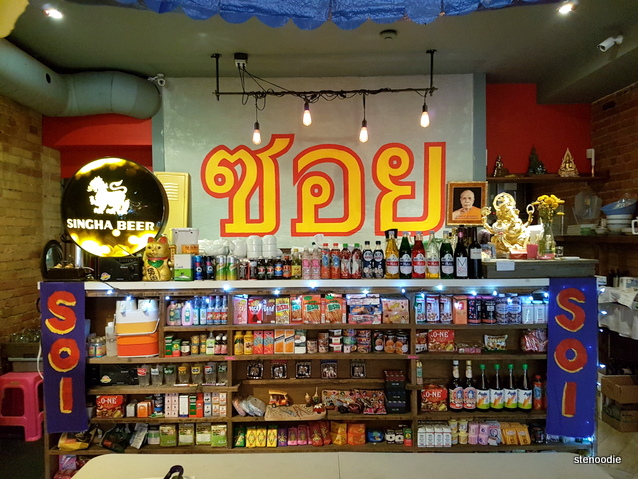 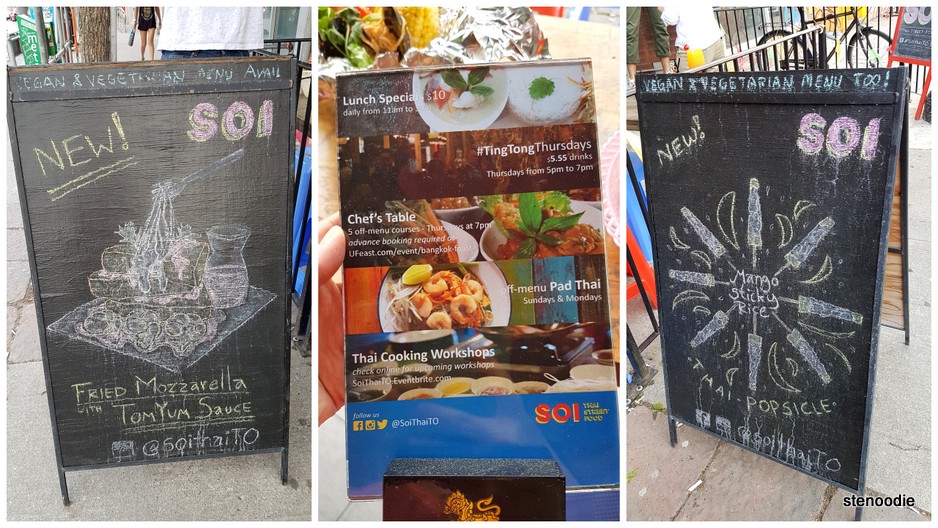 While we were photographing from 6 p.m. to 7 p.m., many of us were getting very hungry but some food Instagrammers were not done taking their photos yet (argh).  I realized at this time that some of them had received drinks.  I had to approach the server myself to inquire about the Thai Iced Tea that they were offering.  I felt neglected as a guest since the others were welcomed with the drink right away whereas I had to ask for it myself.  Fortunately, the Thai Iced Tea was pretty good. 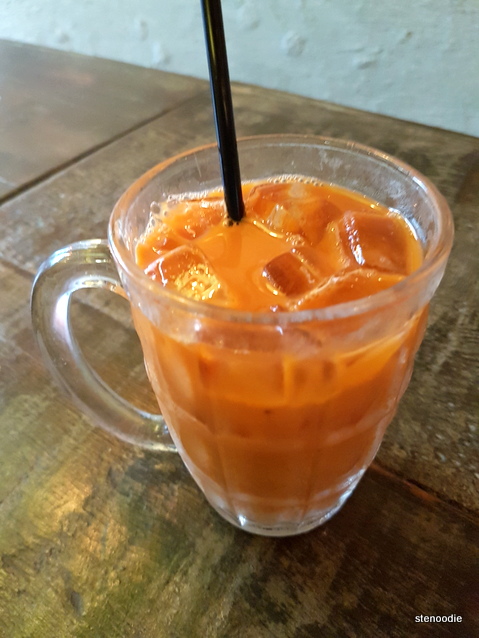 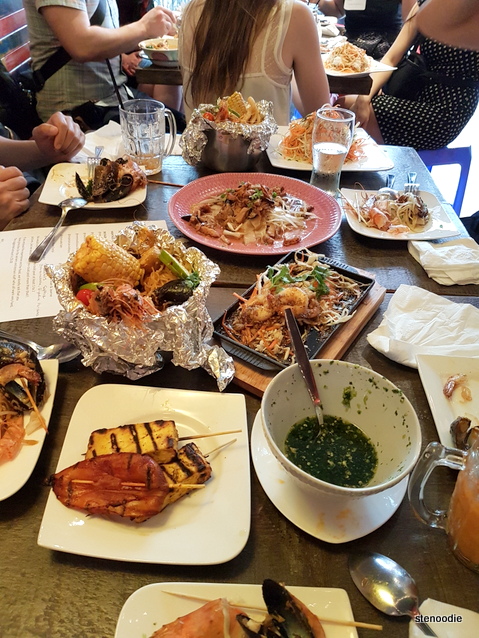 The food that we actually ate

Finally, by 7 p.m., we were able to eat.  To my utter shock and dismay, it turned out that we were actually eating the items off of the display table!  (:O Cue in disgusted face.)  Up to this point in my event-attending days as a food blogger, I had never eaten the items off of the display table before.  The items that were used to be photographed were all cold by that point and covered with who knows how many germs and dust from the people that touched them to take photos.  I thought it was highly unhygienic and inappropriate for the event to serve us those items.  In addition, it doesn’t accurately reflect the taste or impression of the food that the kitchen intended to serve.  Most events will provide a display table full of food solely for photographing and then when it came time to tasting the items, the guests are given fresh and hot foods from the kitchen.  This was the first time that I had this happen at a tasting event.

No one spoke up about eating the display food and as it was all Thai “street food” — which I guess can be served cold — I went along with it and ate those items too.  Although I didn’t exclaim about this poor practice at the time, I am certainly sharing about it now in my blog. 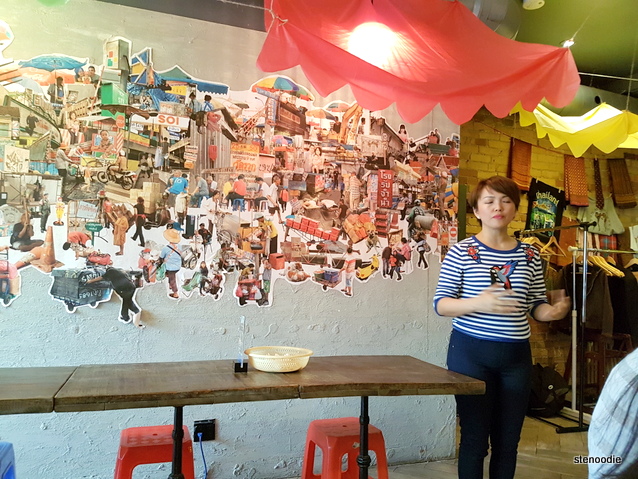 The owner gave a speech

The Thai Seafood Bucket was really an incarceration of the popular seafood boil concept that had been floating around in the Captain’s Boil restaurants last year.  In my opinion, this was just an attempt by Soi Thai to latch on to the trend and see if it would fly. 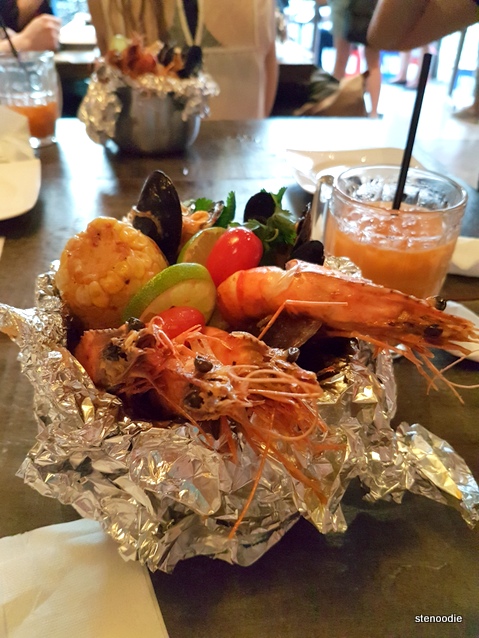 The Thai Seafood Bucket that we shared 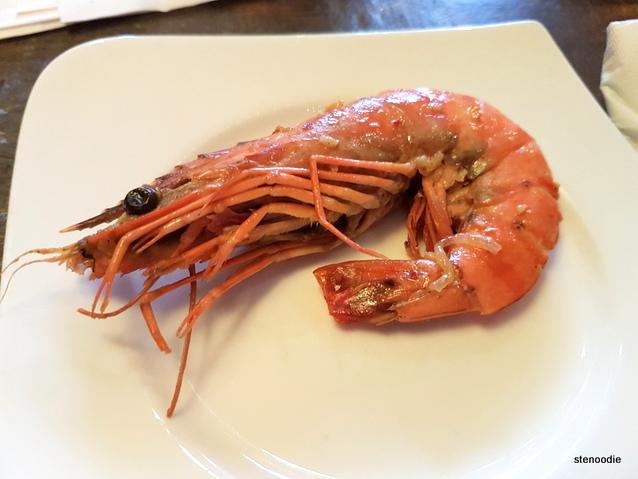 The large tiger shrimp inside the seafood bucket was not fresh.  Its meat was mushy.  It is very obvious when shrimp is not fresh.

The mussels and calarmari were moderate.  The outstanding part of the seafood bucket were the glass noodles which had soaked up all of the sauce in the pot.  The glass noodles was indeed delicious and I couldn’t get enough of it (all this said despite the fact that it was all lukewarm by the time we were eating it — because it had been sitting out on the display table for an hour).

The glass noodles with carrot, cucumber, and radish was really good and fresh when mixed with the special Thai sauce.

We were also provided a serving of SOI’s Spicy Lui Suan sauce (sweet and spicy cilantro sauce) that went with the glass noodles. 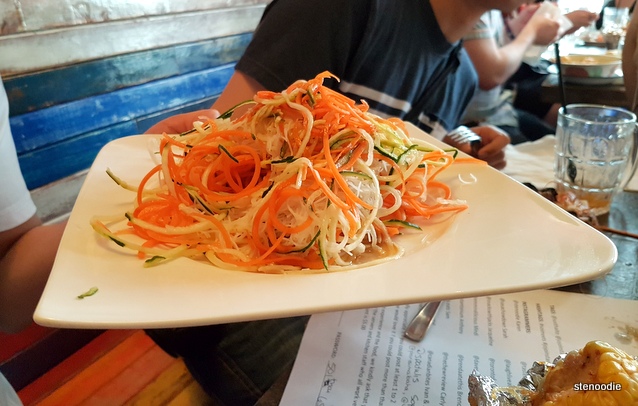 We shared the Chicken, Squid, and Marinated Tofu Skewers too.  To taste good, skewers have to be eaten hot and fresh!  These were all cold by the time we ate them and I absolutely cannot comment positively on their taste.  The squid was rubbery for sure.

Also, there weren’t even enough to go around.  We had to tear apart the skewers to share them. 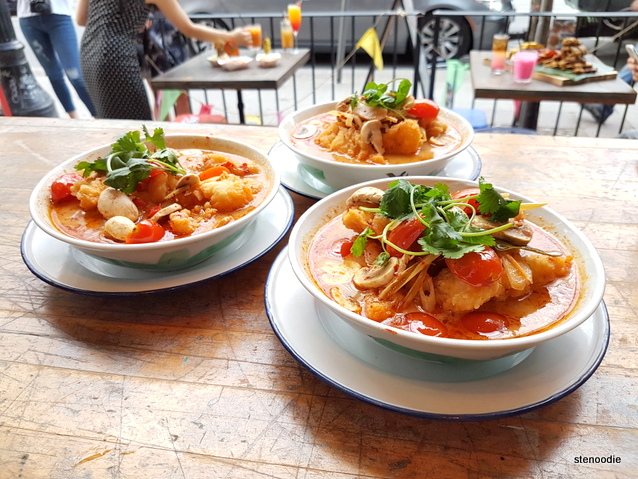 The three bowls of Tom Yum Platoo soup had to be shared by four tables.  The kitchen did not prepare enough for us to share.  In fact, our table didn’t even receive our own bowl.  We had to ask our neighbouring table for their bowl in order to try it.  Each of us only got to try one sip.  I thought that this was very poor planning on the restaurant and kitchen’s part…

The Tom Yum Platoo soup was a spicy tom yum soup with battered fish.  It was made with lemongrass, kaffir lime leaves, galangal, lime juice, fish sauce, and chili peppers.  The one sip that I did have actually tasted good and was full of flavour!

The Goong Tod Kratiem Prik Thai was also really good!  This was the second highlight item of the tasting.  This were shrimps in garlic and black pepper sauce on a sizzling platter.  The shrimps were well seasoned here.  Again, if we were allowed to eat these while hot, they would have tasted even better… 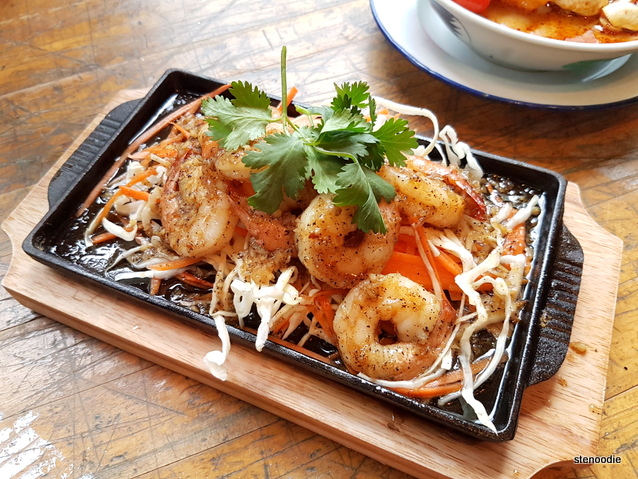 We were all served one portion of the Guay Tiew Lord to try which was a dish of flat rice noodles with shiitake mushrooms, tofu, pickled turnips, soy crisps, and bean sprouts.  This was a vegan dish.  We passed it around the tables in order to try it.  It was an okay-tasting dish to me. 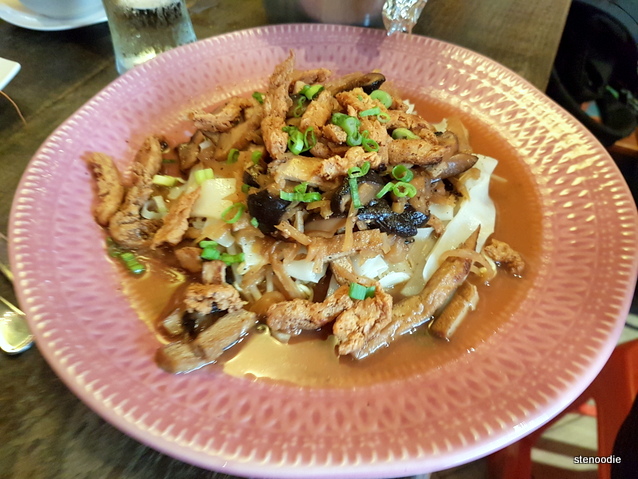 By 8 p.m., the meal was complete and I left.  It was definitely the first time that I had eaten display food like that (not optimal and really speaks to the small budget that the restaurant used for this event)…  Nevertheless I’m glad that I had this experience though.  I certainly can’t be upset about complimentary food when it is given to me but I will always blog honestly about what I saw and experienced.

Thank you to @jojoinstameets for the tasting event and to Soi Thai Street Food for providing the meal. 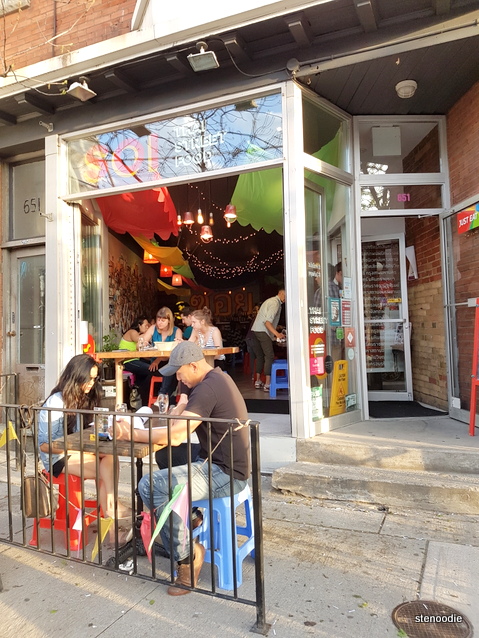 (As of the time of posting, Soi Thai Street Food is closed for business due to renovations.)  Edit:  They have now newly opened at the same location as “Shanee”.

FTC Disclaimer:  Although Jojoinstameets and Soi Thai Street Food invited me to a complimentary tasting, the opinions expressed here represent my own and not those of the companies.