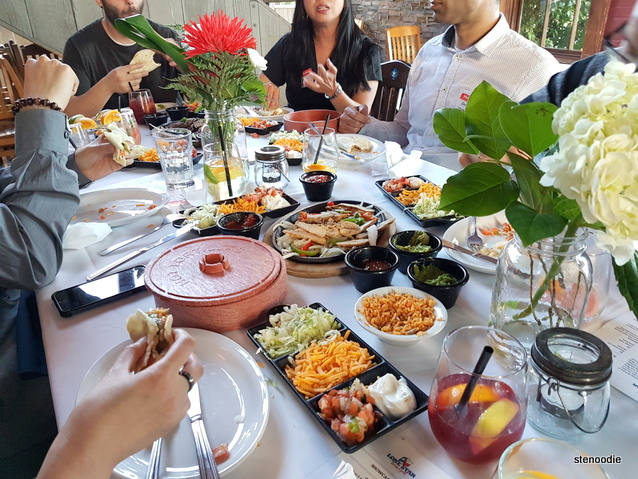 The first and only time I had stepped into a Lone Star Texas Grill was all the way back in university, which is really about ten years ago.  I remember that visit as fairly lackluster and since then hadn’t had a strong affinity towards Lone Star Texas Grill and their many locations all over Ontario.

However, this past Wednesday, I was treated to a media tasting hosted by jojoinstameets at the Etobicoke location of Lone Star Texas Grill and I have to say that I was honestly blown away by the new look, taste, and flavours of this Tex-Mex chain restaurant. 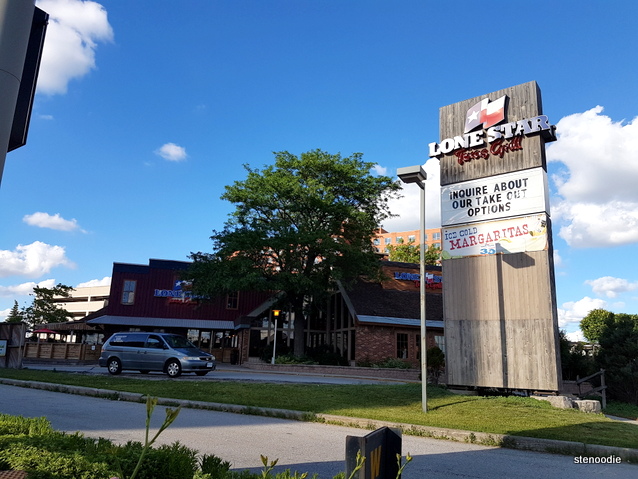 Restaurant view from the outside

The event was slated to began at 6:30 p.m. and I arrived just a little after the start time (due to my bus getting stuck in rush hour traffic for a bit of time).  At first look, this Etobicoke location was huge!  It had a really nice storefront with a big tall sign.  As I approached the doorway, I spotted the large windows where I could see some people standing on chairs to take photos of food.  Immediately, I knew where the instagrammers were without needing to consult the hostess when I walked into the restaurant. XD

On the table, there was an absolutely gorgeous display of food presented for us already to take photos of.  Everything was colourful, looked fresh and delicious, and smelled amazing!  We took some photos of the flat lay dishes before bringing out the dishes to the sunlit patio where we captured the stars of the night from different angles and vantage points (so many different dishes!). 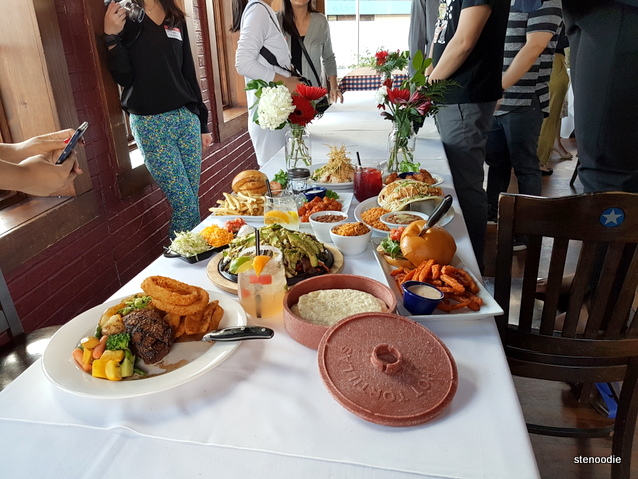 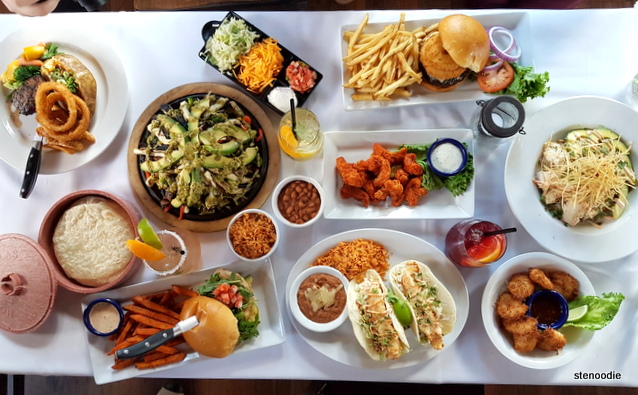 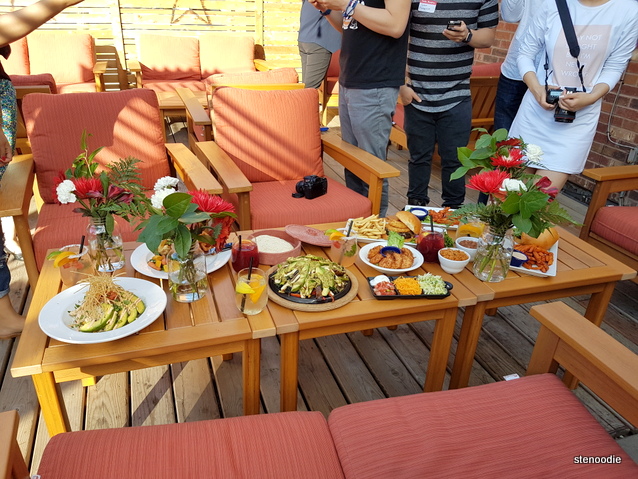 Relocating to the patio for more photos 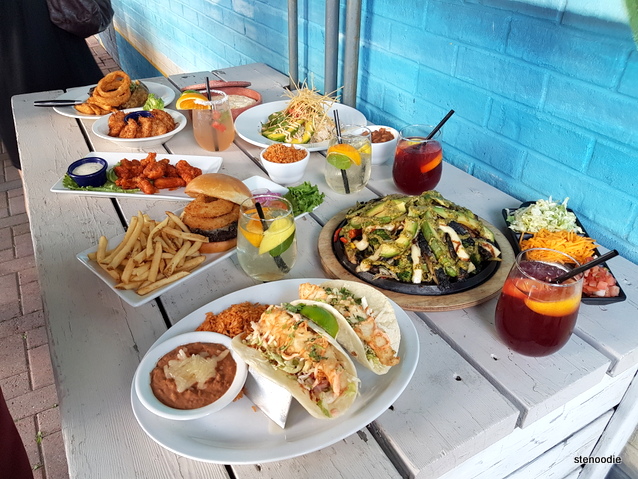 Photoshoot against a blue backdrop 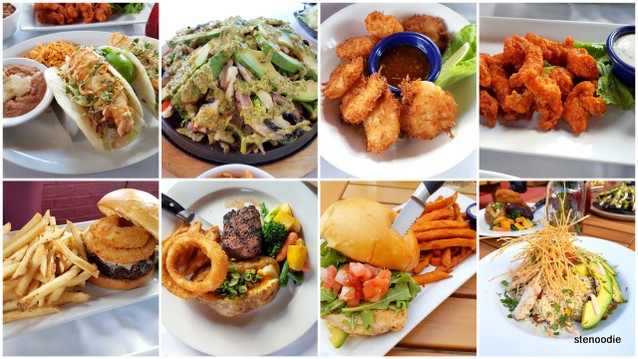 This shows the showcase menu items

I’m glad that Joanna was able to keep everyone on a tight time leash by ushering us to begin the actual dinner portion once enough photos had taken place. 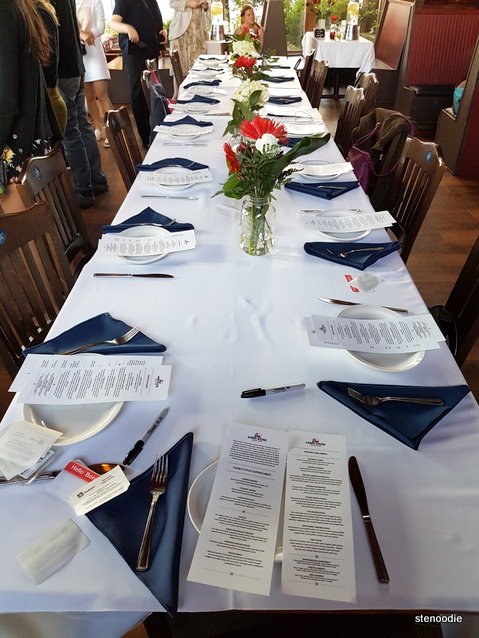 We were treated to a family style tasting menu which consisted of a wonderfully crafted selection of their most popular items!  The organizers here at Lone Star really went all out to plan this event to ensure that we had the best impression of their restaurant and food! 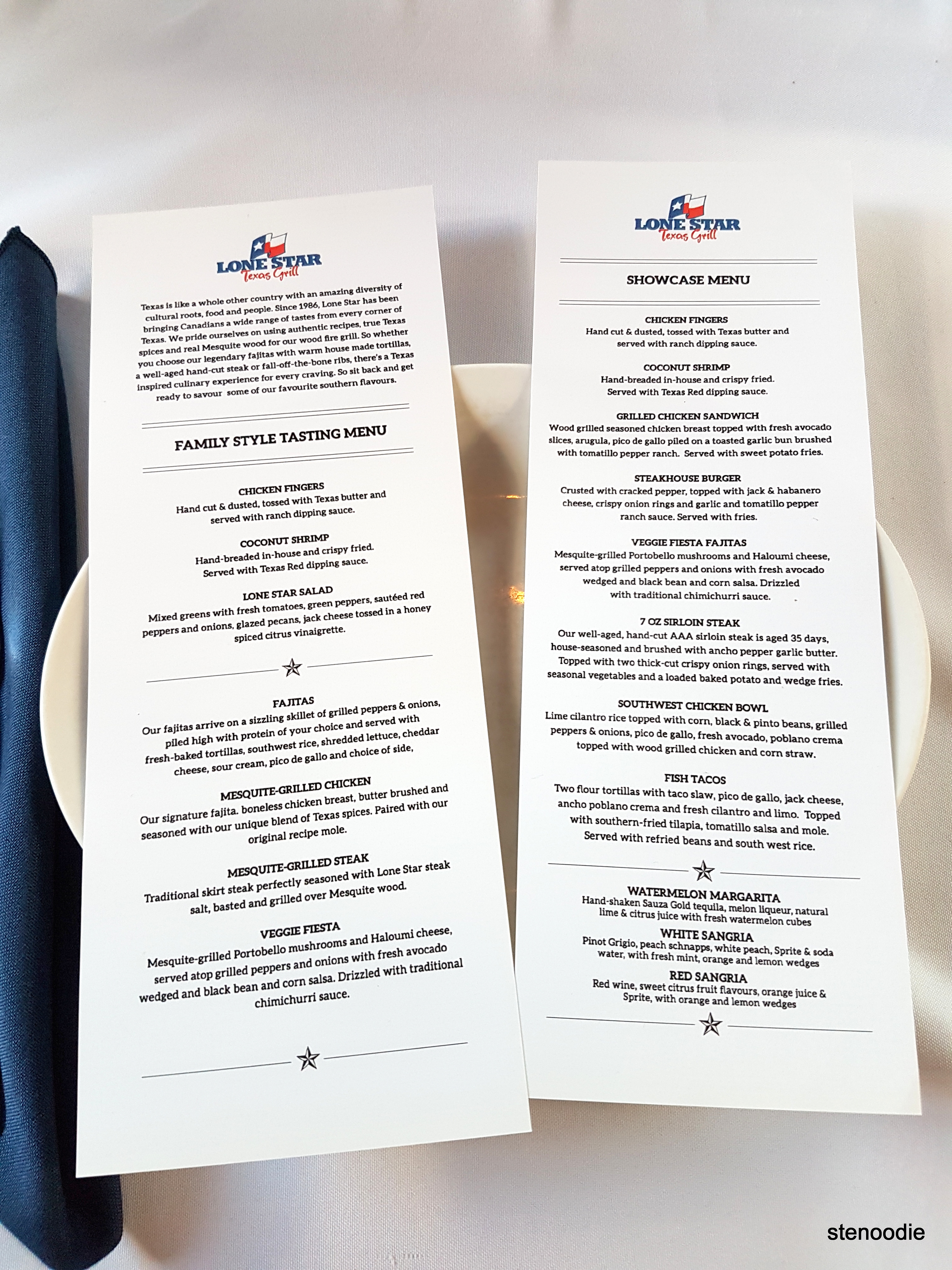 We were served their drinks: Watermelon Sangria and Red & White Wine Sangria.  I tried the Red & White Sangria which was refreshing.  Unfortunately, I didn’t get a photo of the other one since all of them had already been distributed when I arrived. XD 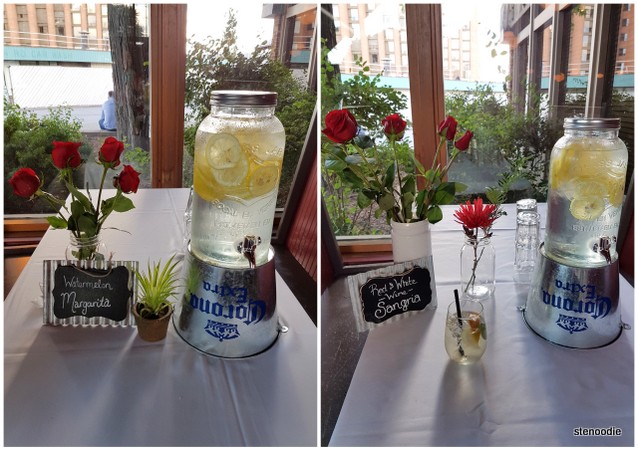 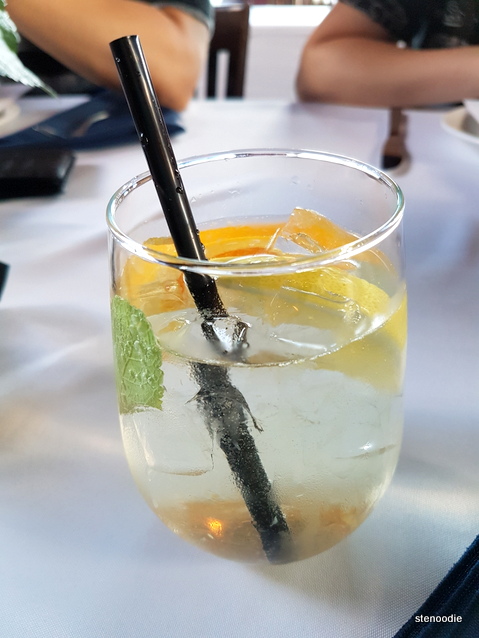 After a brief introduction by Joanna, the representative for the event, and even the corporate chef, we dove into the food which was promptly served. 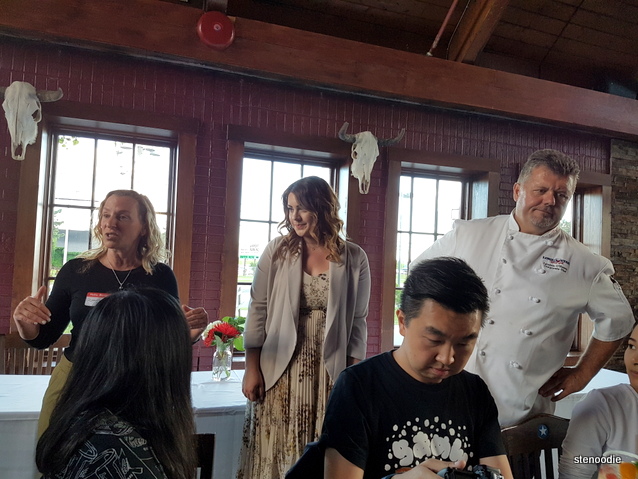 The Coconut Shrimp was amazing!  It was perfectly breaded with coconut shavings and fresh out of the fryer.  The Texas Red dipping sauce only made it more delicious. 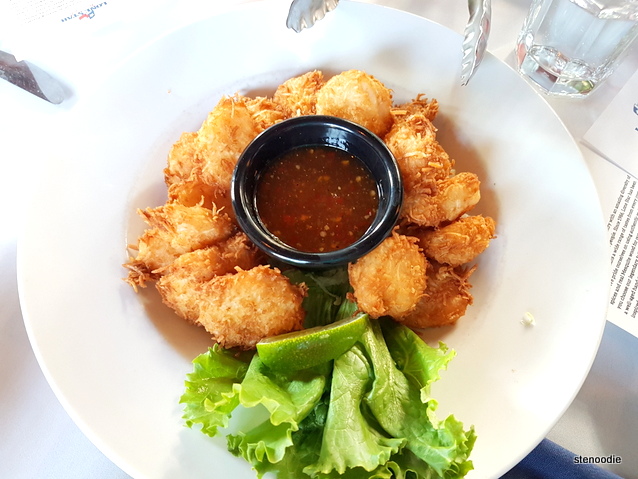 The Lone Star Salad was a really healthy and fresh salad made with mixed greens, fresh tomatoes, green peppers, sauteed red peppers and onions, glazed pecans, and jack cheese tossed in a honey spiced citrus vinaigrette.  I especially liked this salad because there were elements of raw and semi-cooked items.  The honey spiced citrus vinaigrette indeed was a little sweet yet spicy too.  It was a very wholesome salad to eat! 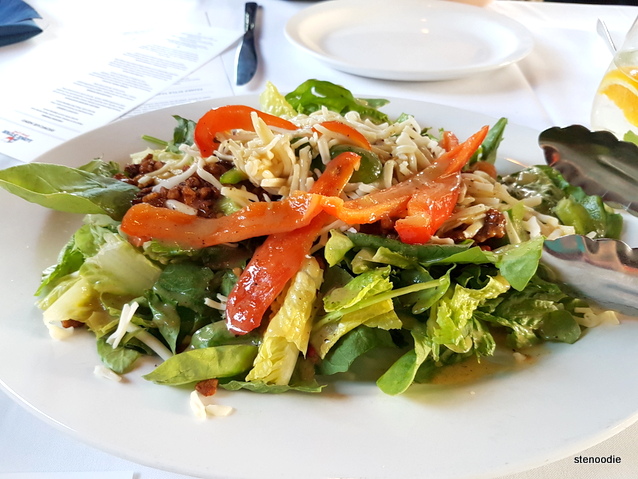 The Chicken Fingers were really good too.  I also loved the ranch dipping sauce that came with this. 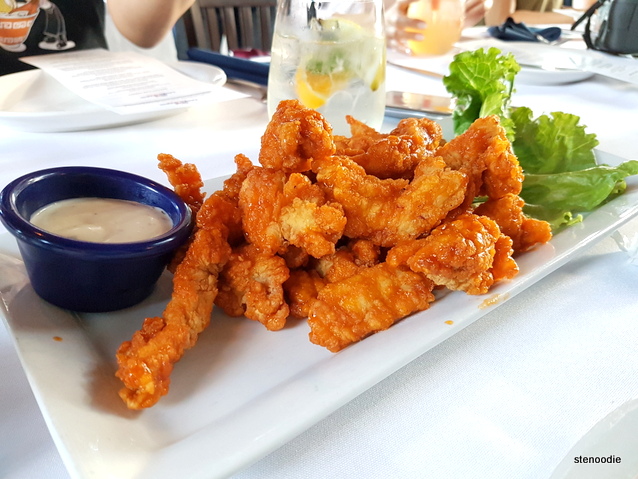 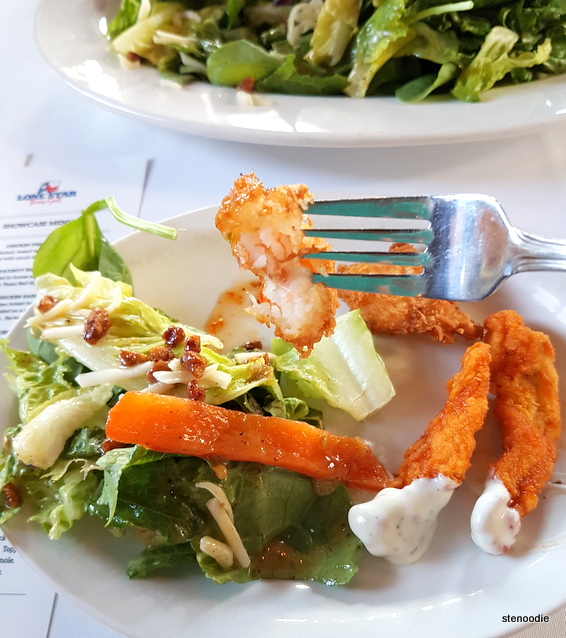 Even after the first round of appetizers and not even close to the main course yet, we all were very satisfied with the portions of food already.  Our plates and cutlery were cleared from our table and we were given fresh and clean cutlery for the next round of food.

We were able to try three types of fajitas that night.  (All of their fajitas arrived on a sizzling skillet of grilled peppers and onions and piled high with the protein of your choice [or veggies] and served with fresh-baked tortillas, southwest rice, shredded lettuce, cheddar cheese, sour cream, pico de gallo, and a choice of side.) 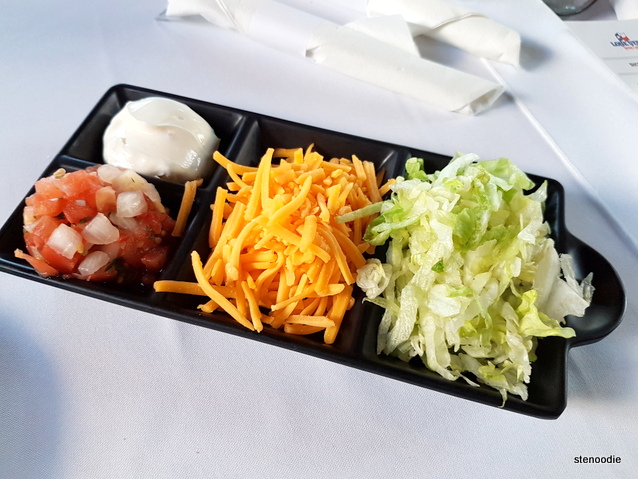 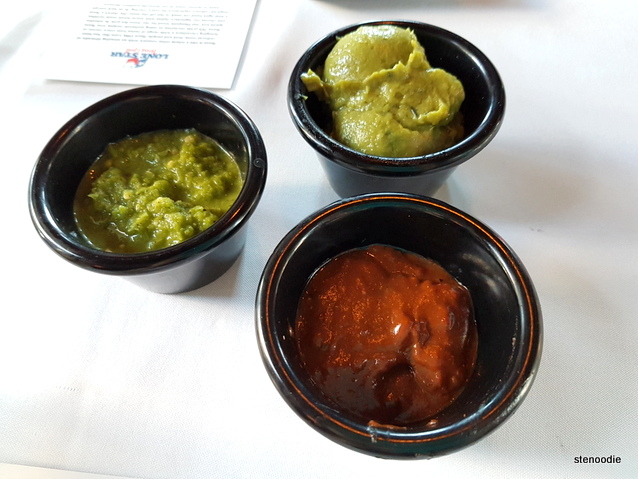 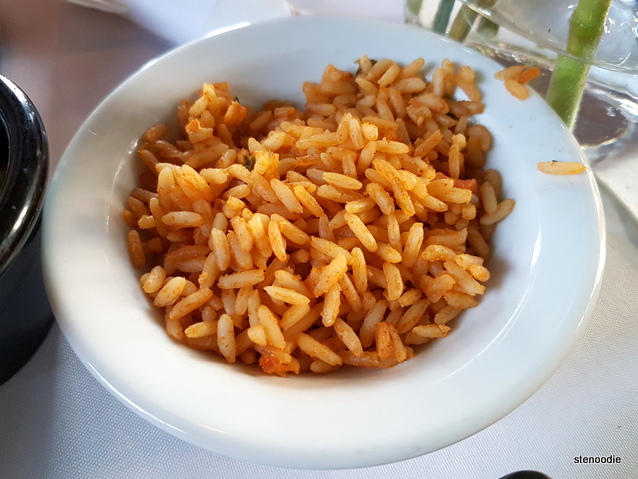 Despite sharing family style, we did get our own portion of shredded lettuce, cheddar cheese, sour cream, and pico de gallo.  The fresh-baked tortillas were also served in a container that kept the soft tortillas fresh and hot. 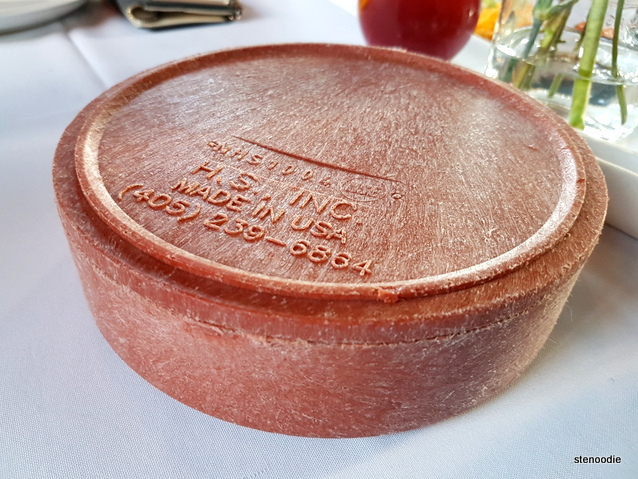 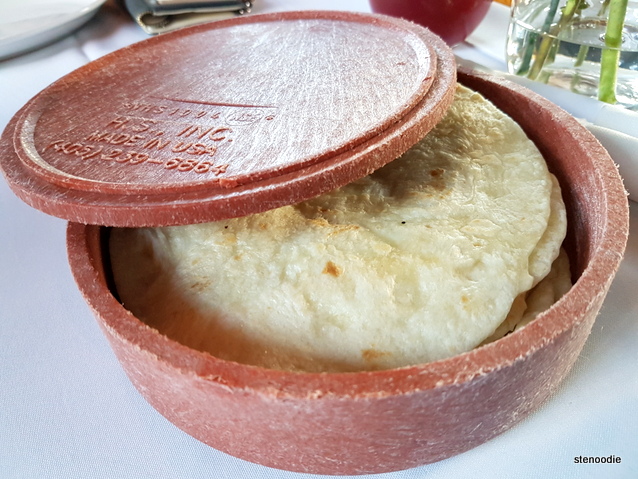 The Mesquite-Grilled Chicken was a boneless chicken breast butter brushed and seasoned with a unique blend of Texas spices.  It was paired with their original recipe mole, which was so good! 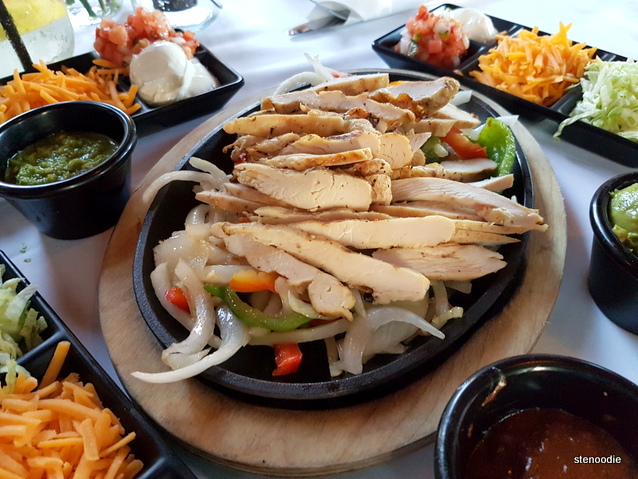 The Mesquite-Grilled Steak was a traditional skirt steak seasoned with Lone Star steak salt and then basted and grilled over Mesquite wood. 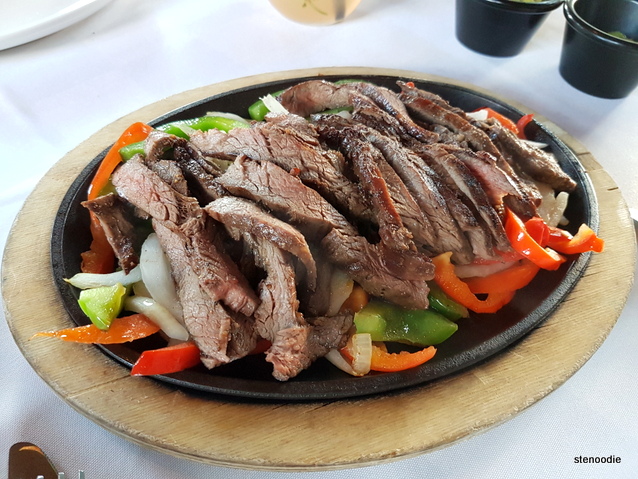 The Veggie Fiesta was a sight to behold.  When I first saw it on the display table, I exclaimed, “Wow!  What is this dish?” because it looked so amazing piled with fresh avocado wedges.  There were also Mesquite-grilled Portobello mushrooms and Haloumi cheese with grilled peppers and onions as well as black bean and corn salsa.  It was drizzled with traditional chimichurri sauce too. 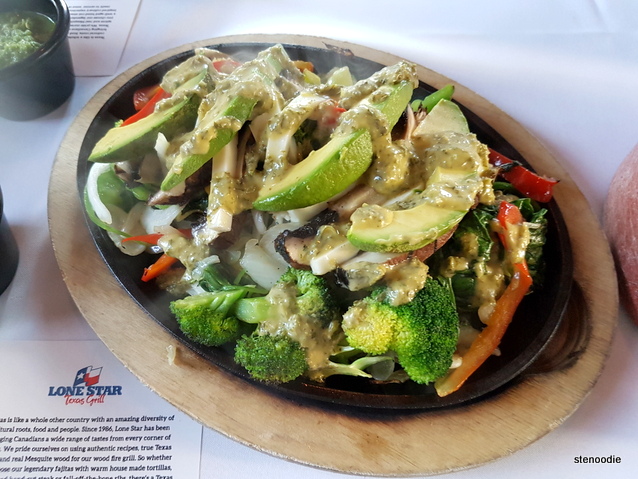 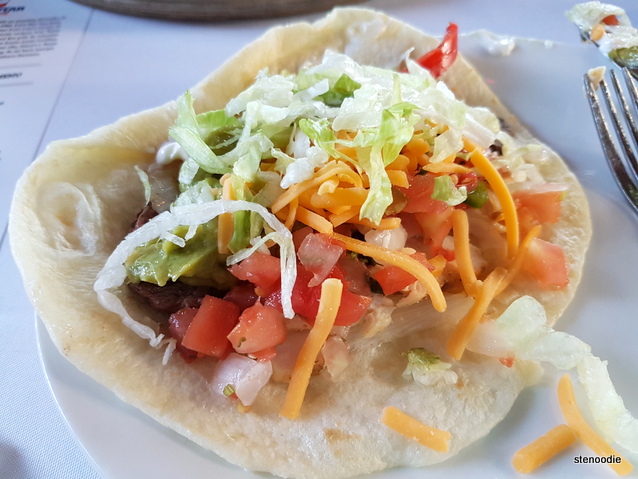 My custom fajita with steak, chicken, and veggies! 🙂

How to eat all this amazingness?  Take a piece of steaming hot soft tortilla from the container, put it on your place, then pile in the protein (or not) you want followed by the toppings.  Eating fajitas is more of an event than tacos (as I found out in this article comparing the two) and it was so fun to build my own fajita the way I wanted to.

In my fajita, I put some of the skirt steak, chicken strips, and veggies.  I put mole sauce, guacamole, and some spicy relish too.  I loved how soft the tortilla was!  It was fluffy and a little chewy too and wrapped everything up together so well.  It was really an amazing feast!

By the end, I was really full even though I had only one full fajita.  (I also shared half of a cracked black pepper tortilla with some veggie fiesta — that tortilla was so good and spicy throughout!)  The portion sizes were more than generous here!

The hospitality and generosity shown by the staff were impeccable.  We were invited to take home some of the leftovers as well, which I was more than happy to. 😀 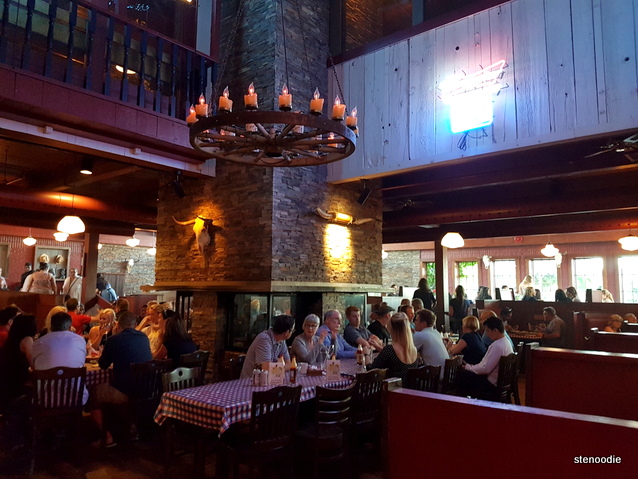 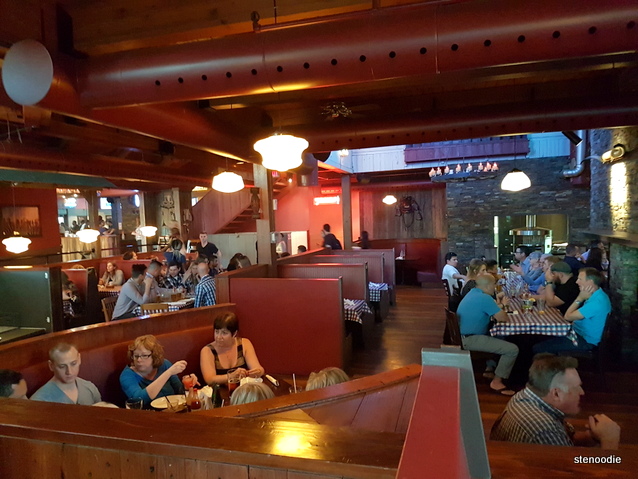 For a Wednesday, it was really packed!

Thank you so much jojoinstameets for hosting one of the best Tex-Mex events I’ve ever been to and to Lone Star Texas Grill for providing absolutely mouth-watering and delicious fajitas, appetizers, and drinks for us.  It was truly an incredible evening! 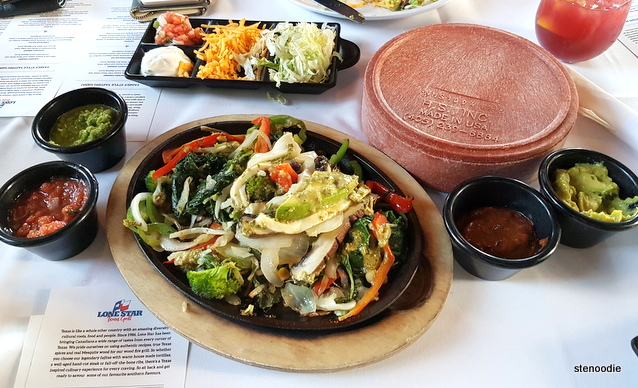 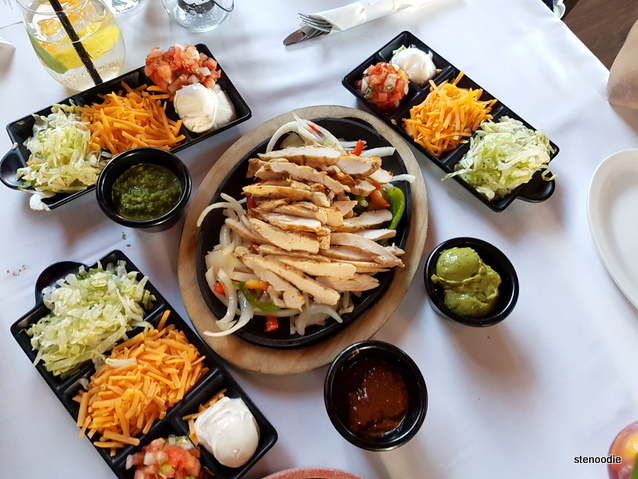 FTC Disclaimer:  Although Jojoinstameets and Lone Star Texas Grill invited me to a complimentary tasting, the opinions expressed here represent my own and not those of the companies.