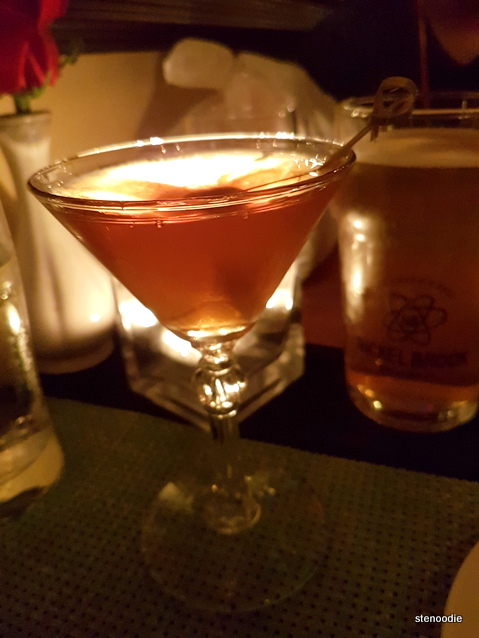 I had noticed this event float up on my Facebook feed a couple of weeks before the event on June 2 and I was highly intrigued by it.  It advertised $1 food dishes after 10 p.m. at Southern Accent.  They were promoting the “newest chapter in Southern Accent’s illustrious history” with the opening of Club 1806, “a speciality bourbon bar, with live music, fresh oysters, Toronto’s first Manhattan ‘Your Way’ menu, bourbon flights, ‘Boilermakers’ (beer ‘n’ bourbon) pairings, and a late night New Orleans Tapas menu every Thursday, Friday, and Saturday”.

Although 10 p.m. is quite late to stay downtown for a second meal, I put it in the calendar anyway to see if things worked out for me to attend.

June 2 came around and it worked out!  After attending the media tasting for a previous event, I met up with Ken and we arrived at Southern Accent before 10 p.m. to partake in this grand opening event.  (Extra bonus to the sweetie for coming downtown twice in one day just to try this out with me.)  Who doesn’t want to try food for just $1 a plate?  I had been to Southern Accent before and loved their food (blog post to come still) and had raved to it to Ken who was thus intrigued as well.

After we walked into the restaurant at 10 p.m. sharp, I informed the hostesses that we were there for the grand opening event and thus we were seated at a table offshoot from the bar in order to partake in the $1 food specials.  Southern Accent is a very dimly lit restaurant but when you walk in, there is so much ambiance and its mood is like it is Mardi Gras there every day.  Southern Accent holds a special place in my heart of food adventures for a very good reason (again, blog post to come about that.)

We received the menu for Club 1806.  I decided to order the “Accents of Ginger Trace”, a bourbon combination, while Ken ordered the “Family Man”, a combination of beer and whiskey (Craft Lager and Jim Beam) called Boilermakers.

“Boilermakers is known as beer drunk with a whiskey (either combined into one glass or enjoyed as a chaser) is a practice that originated amongst Scottish and Irish factory workers”. 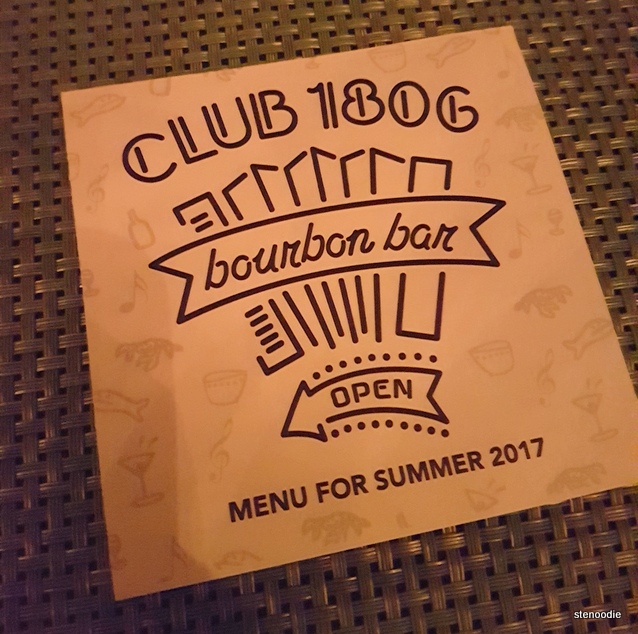 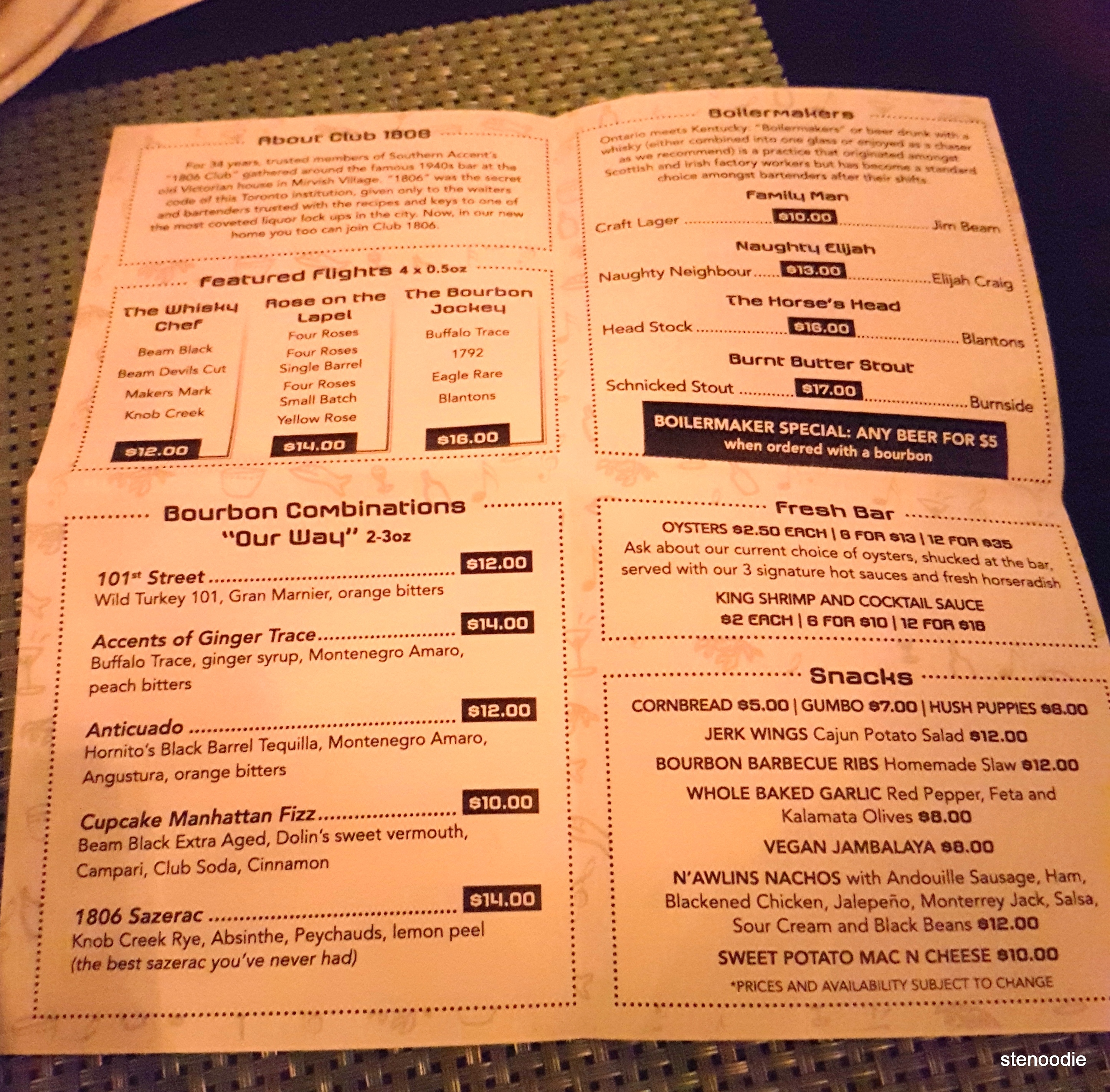 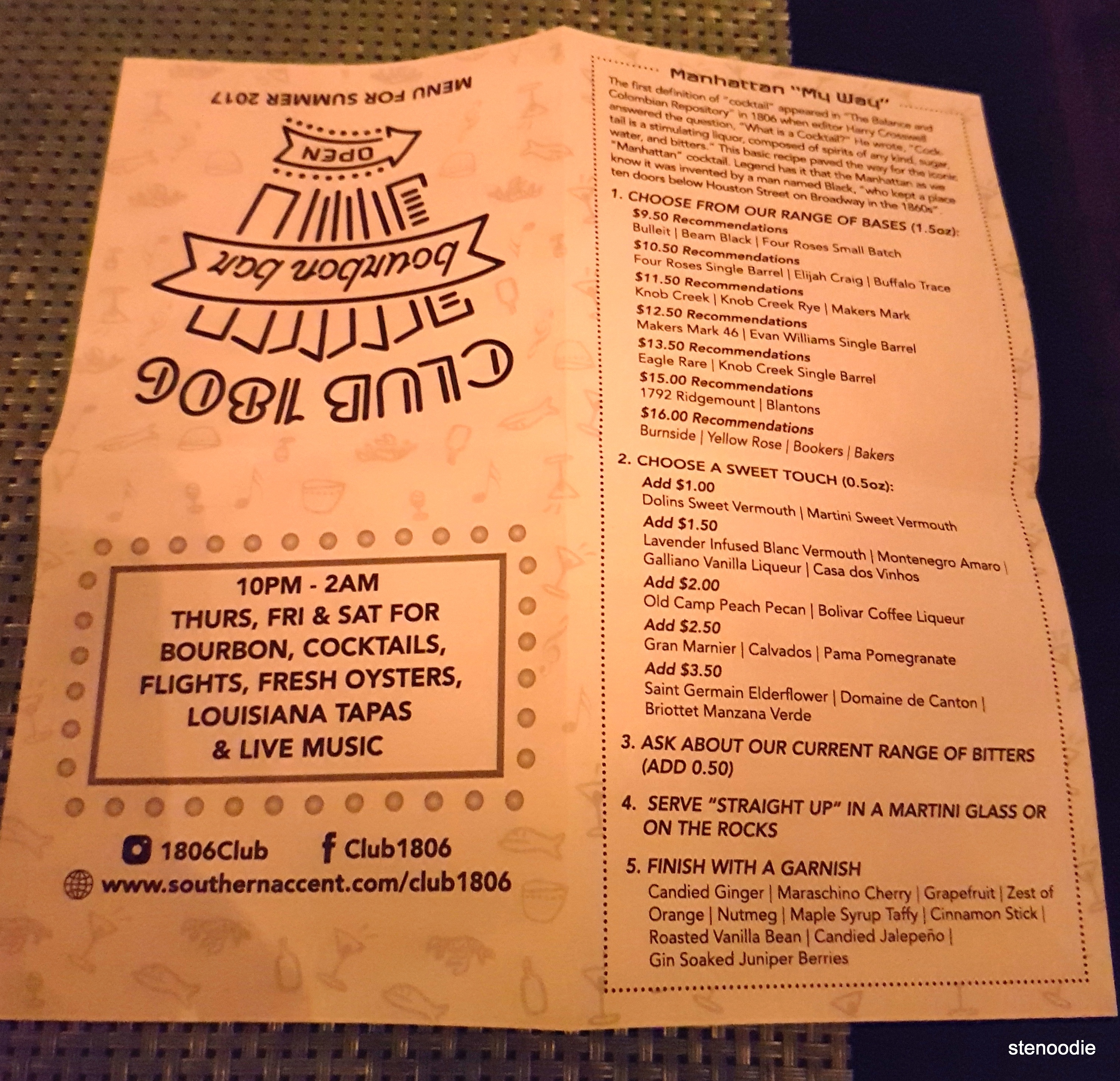 We also confirmed with our server about the $1 specials as it didn’t specify on the menu about those.  We informed him that we knew about it from the Facebook event. 🙂

We ordered a couple of things to share.  We got the Cornbread, Oysters, Bourbon Barbecue Ribs, and King Shrimp & Cocktail Sauce.

It did take a while for the food to arrive but I was really excited for the $1 food and the overall restaurant. 😀

As for our drinks:

My Accents of Ginger Trace bourbon combination drink was really strong and arrived in a martini glass (I believe).  It had Buffalo Trace, ginger syrup, Montenegro Amaro, and peach bitters.  It was really strong!  But really good! 🙂 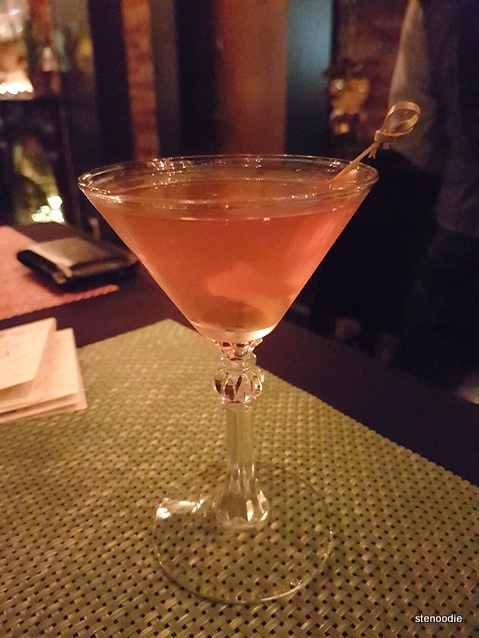 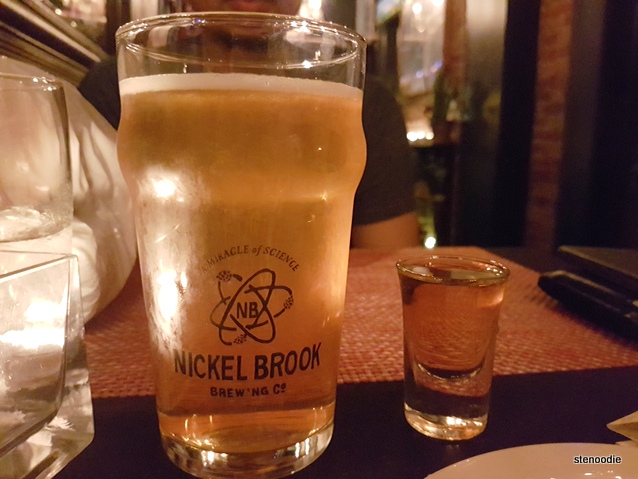 The Family Man Boilermakers drink arrived as the description said — with beer in one glass and the whiskey in a shot glass.  We weren’t sure how to drink this actually and inquired the server about it.  He said that it was up to us to either drink it together or separately.  We tried the Jim Beam whiskey first and it was so incredibly strong!  The Craft Lager went down easier and Ken decided to go with that than mix it all together to drink.  It was a cool drink experience though because I’ve never had something like this before.

When our food did arrive, the King Shrimp & Cocktail Sauce arrived first.  Since everything was $1, it made sense that all the dishes were smaller portioned than usual too.  There were three shrimps in this dish with the cocktail sauce.  I really liked the shrimps!  There were firm and so tasty! 😀 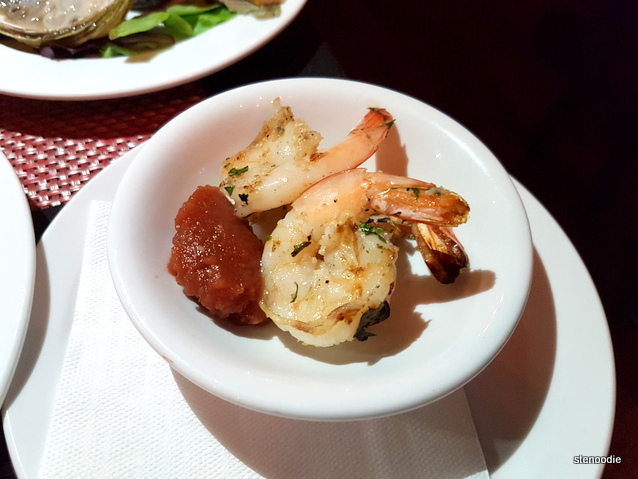 We got one Oyster each.  It was pretty good and fresh. 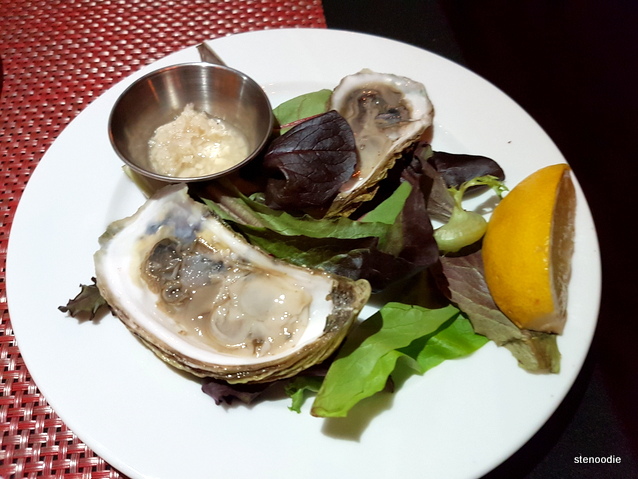 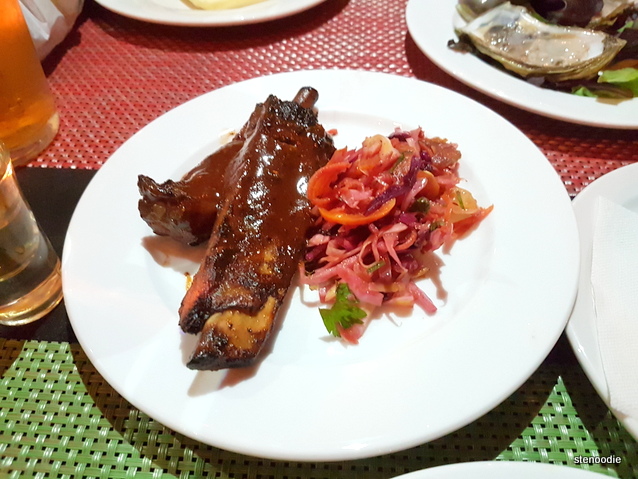 When I tried the Bourbon Barbecue Ribs at the tasting, I absolutely loved it because it fell off the bone and was so incredibly tender.  Its flavour was very good too.  For this one though, I felt that the ribs were more rough than the last time I had had it it which was truthfully disappointing.  However, the homemade slaw that came with it was a hit with Ken. 😀

Although we ordered one serving of the Cornbread, we ended up getting a plate of more than one piece on it!  We had three pieces of cornbread with butter.  The cornbread was pretty good. 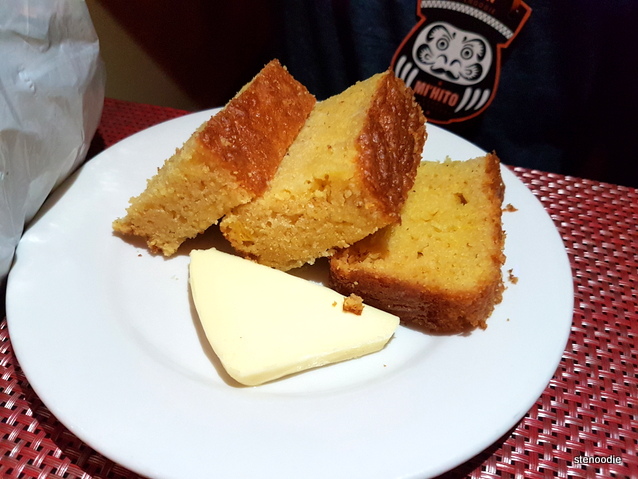 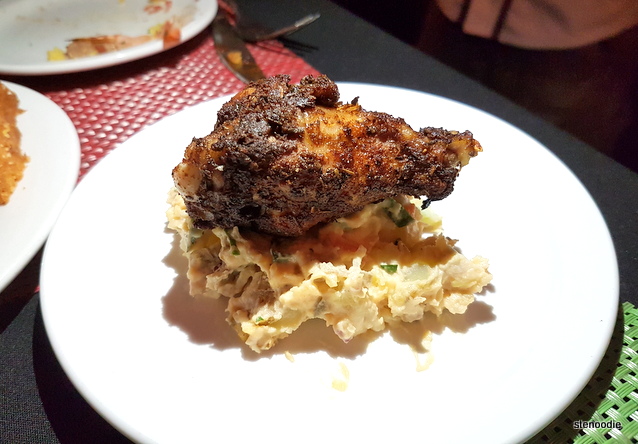 Considering this was a second dinner and we were here to taste a few of each of the items, I couldn’t resist trying the Jerk Wings and I’m so glad that I added it to our order!  The Jerk Wings arrived as a single drumstick on a bed of Cajun Potato Salad.  This was delicious!  I really like strong smoked flavours on chicken like jerk and this one was so tasty and delicious!  The Cajun Potato Salad was good too.  The smoky flavour was a tad spicy too which I really enjoyed.

(I rarely ever purposely post blurry photos but this was the only one I got of the table with all the food.  We were running out of room!  However, this photo captures the mood of the place.  It was a hazy, delicious meal with strong booze!  A happy Friday and start to the weekend indeed.) 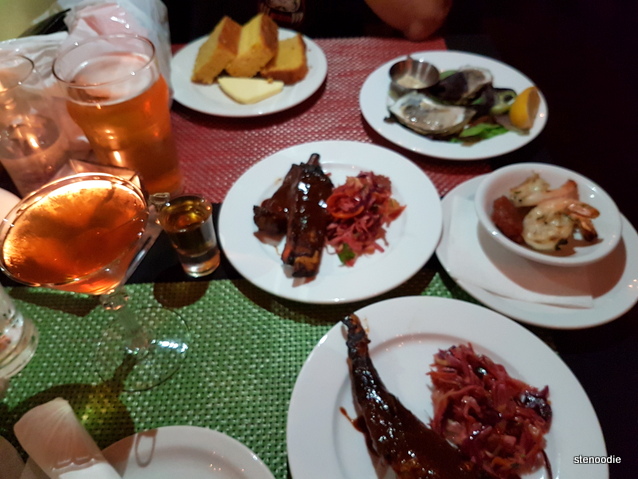 Our blurry spread of food

After we finished our drinks, we headed on our merry way home.  We ended up taking the rest of the ribs and the cornbread home too since it was too much for us to finish. 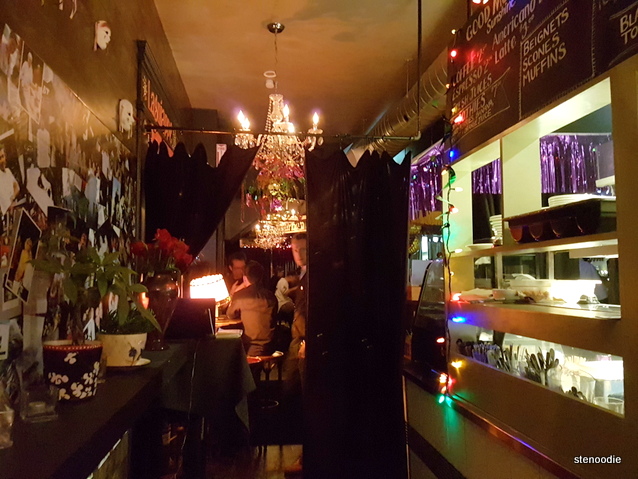 When you walk into Southern Accent, you feel like you have been transported in time and place 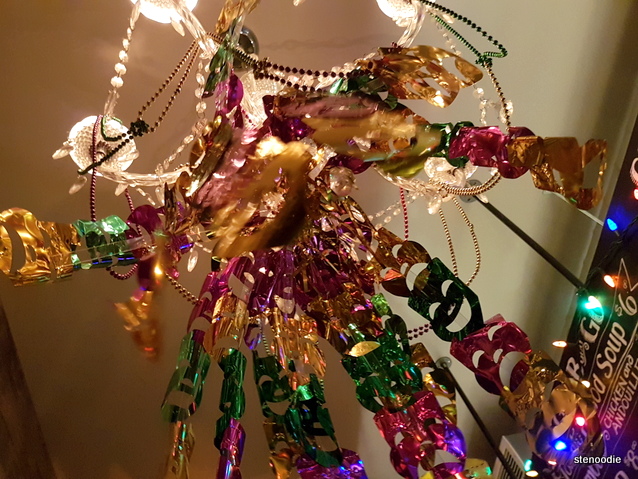 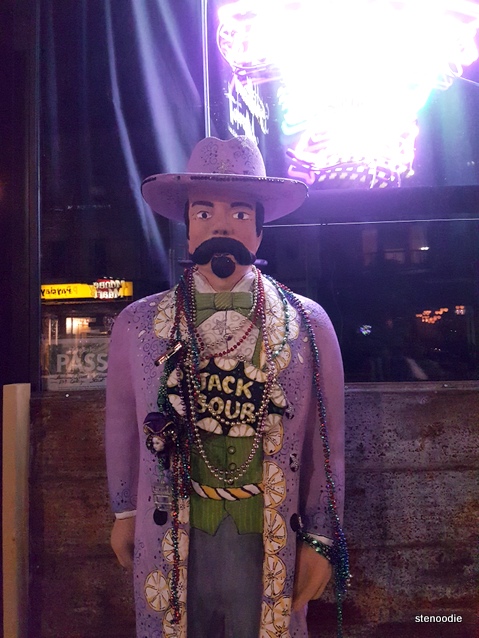 The man(nequin) outside the restaurant 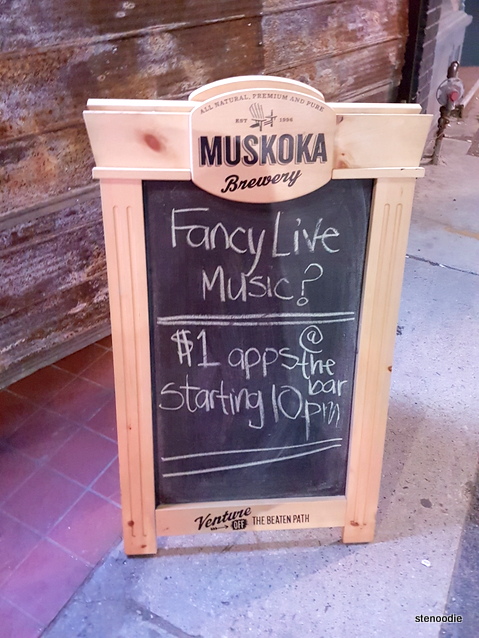 Oh yes, there was a live musician too!

I really enjoy the food at Southern Accent and wish they were located closer to the heart of the city.  I would come here again to have their food in a heartbeat if they were closer to me… and also because they have half off appetizers every day from 4 to 6 p.m. ^_^