This should become a reporting standard 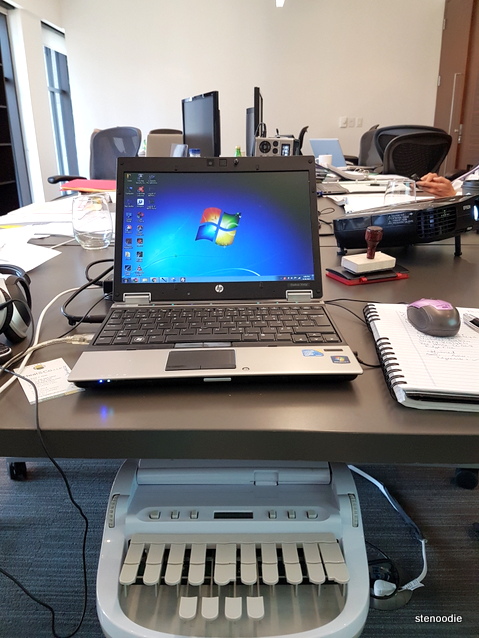 I didn’t take a photo of the screen but you can see on my table the two TV screens, one against another one

There were two witnesses in today’s steno job.  The parties had requested a split monitor with HDMI cable capabilities and also a large screen with a projector.  It was the first time I had a job with a tech request like that.  It turned out to be the best request ever!  Now I wish every job is like this.  Basically any time that they had a document that they were referring to, the assistant pulled up the document right on to the projector screen so that everybody in the room could see it.  The parties also had their own copies in hard copy form or electronic copy on their laptops so the projector screen was actually a little redundant on a few occasions, but it was absolutely 1000% useful for me.  I was able to see exactly what document they were referring to and reading from.  This helped me so much with names.  I didn’t have to jot them down to ask counsel for the spellings afterwards which saved me at least ten minutes for the day.  Yay!  Also, it helped immensely with technical terms.  Ninety percent of the time, I don’t know what the job is about nevermind know much about the particular terms or names that are referenced.  (Today, I had the word “maxi-packers” at least a few times and if not for seeing it up on the screen, I wouldn’t have known how to transcribe it.)  Anyway, I really think that this technology should be advocated and used in every single hearing or trial.  It would make everyone’s lives so much easier and especially that of mine.

I'm a stenographer, foodie, avid traveller, and new mom who loves to share her experiences with the world.
View all posts by stenoodie →
This entry was posted in Steno and tagged court reporting, large projector screen helpful for court reporters, steno. Bookmark the permalink.