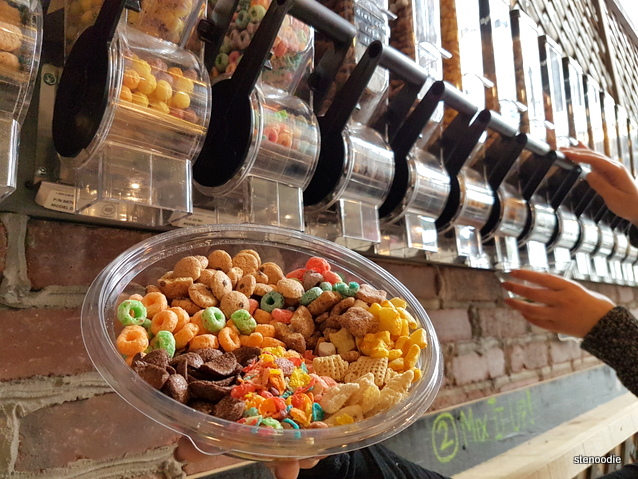 This is what happens when I have a long backlog and don’t end up getting around to blogging about the restaurant/company I was invited to until months later — they closed down even before the blog post went up.  XD

May 6, 2017:  I was invited to the media tasting at Silo 13, a Freestyle Cereal Cafe, newly opened in North York at Sheppard and Yonge in May 2017.  The event was hosted by Jojoinstameets.  The concept of the cereal cafe was relatively new to Toronto as I had only seen and heard of New York having such a cafe.  (Or I believe Toronto may have had a temporary pop-up cereal bar but Silo 13 was the first standing dedicated cafe to open up at the time.)

The media tasting was scheduled from 2 to 3:30 p.m. on a Saturday.  I recall arriving to the plaza where the cereal cafe was located but having a lot of difficulty finding it.  I was at 4750 Yonge Street but since it was a new building, there were no signs inside the building that pointed to where the unit of Silo 13 was.  I ended up calling Jo who was able to lead me by phone to where it was.  It turned out that I had actually walked past the cafe on my way to the plaza itself.  Their signage of “Silo 13” wasn’t obvious at all. 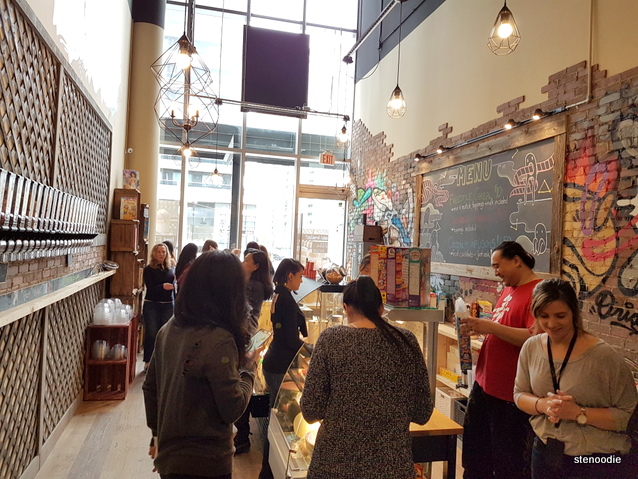 Cereal bar with high ceilings in a well-lit space 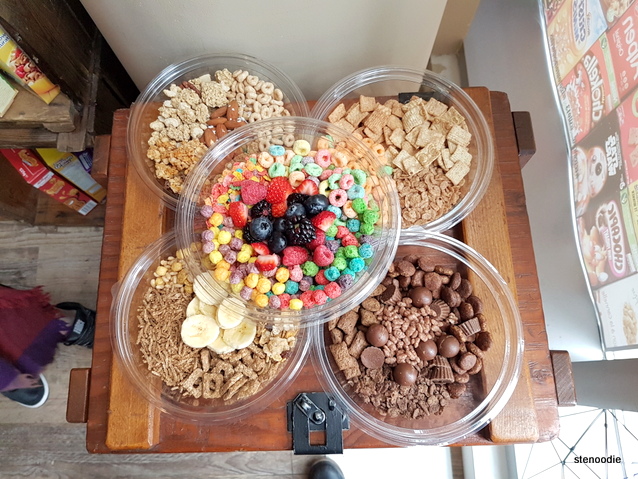 Upon stepping in, I already saw all the Instagrammers photographing various bowls of cereals and boxed cereal that were available at the cafe.  It was a very cozy and rustic-looking space.  A Freestyle Cereal Cafe meant that you could choose the cereal that you wanted to mix in your bowl and eat it there or as take-out (they had a few dine-in tables).  A Freestyle bowl cost $10 where you could mix and match the cereal of your choice with various toppings with a choice of milk too.  You could also choose from a themed bowl with pre-selected cereals from their menu too, also for $10. 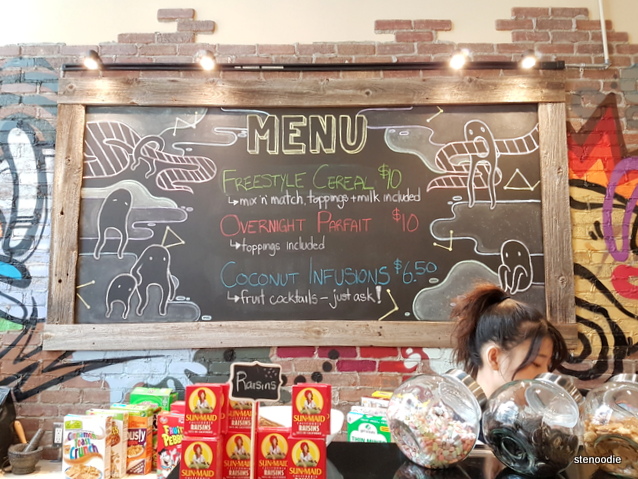 Their menu on the chalkboard 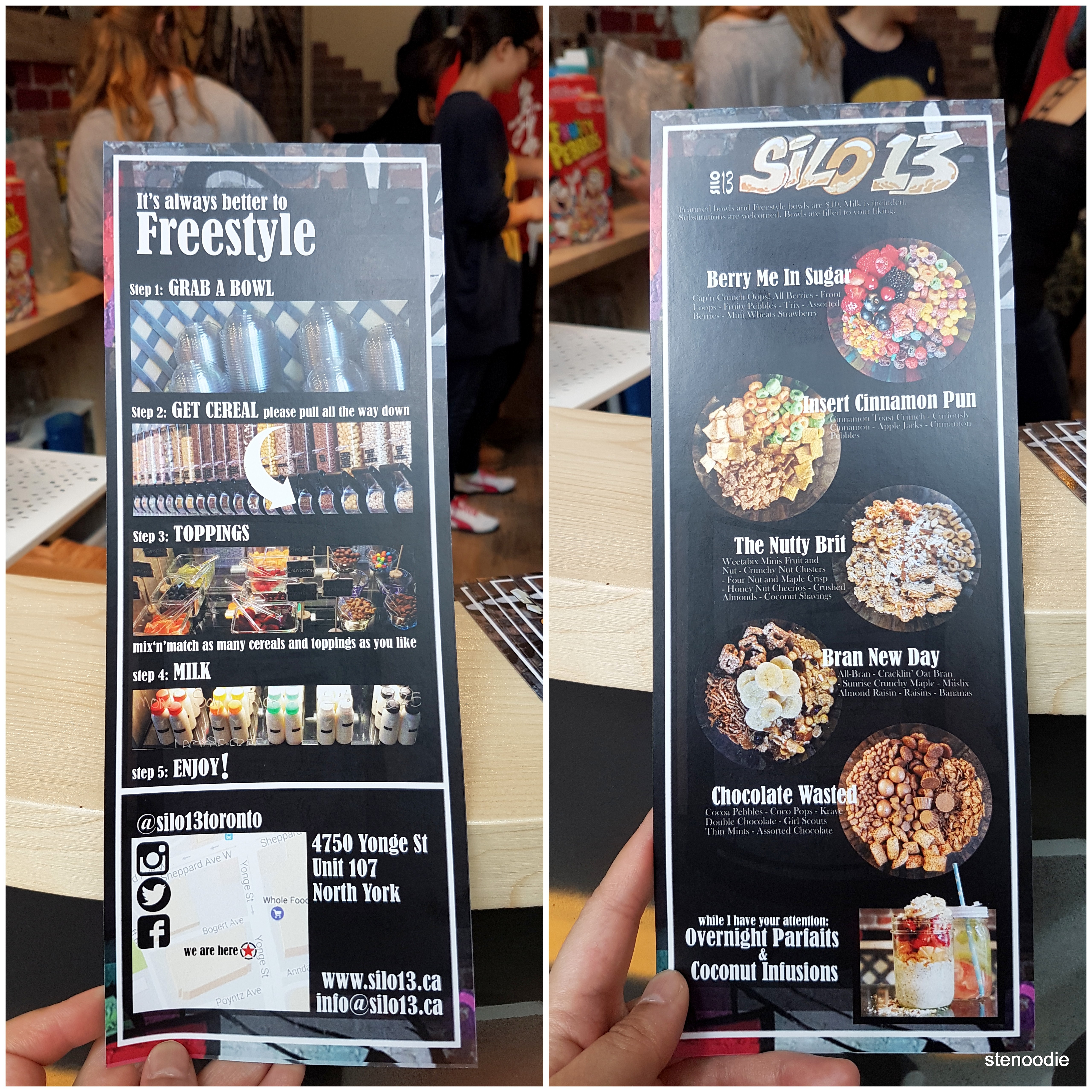 Steps to making a Freestyle bowl or order a themed one 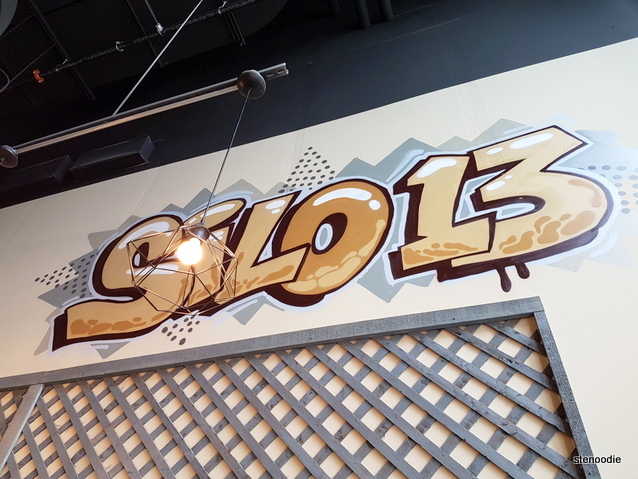 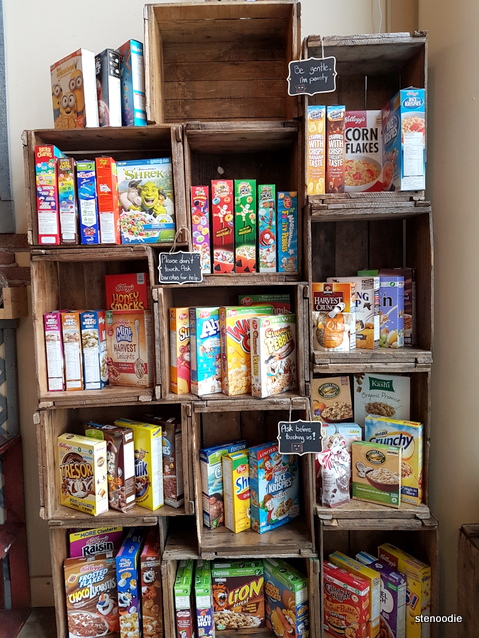 So many types of cereal on display!

There was a short speech by Joanna and the staff who explained the concept of their store.  After that, we were welcome to sample the cereal bowls by making our own.  It was neat to make our own customized cereal bowls by pulling down the levers of the different types of cereals to make our own bowls.  There were so many types of cereal and even some that were from overseas (from Korea, France) as well as two types that were banned in Canada (due to their high sugar content if my memory serves me correctly). 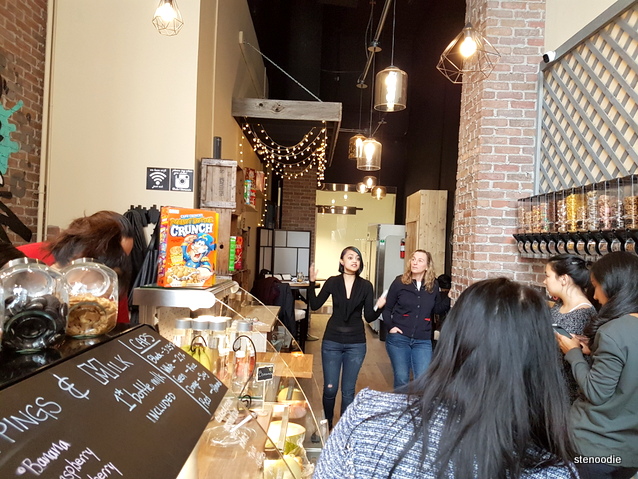 I tried some of the cereals on their own before creating my own bowl. 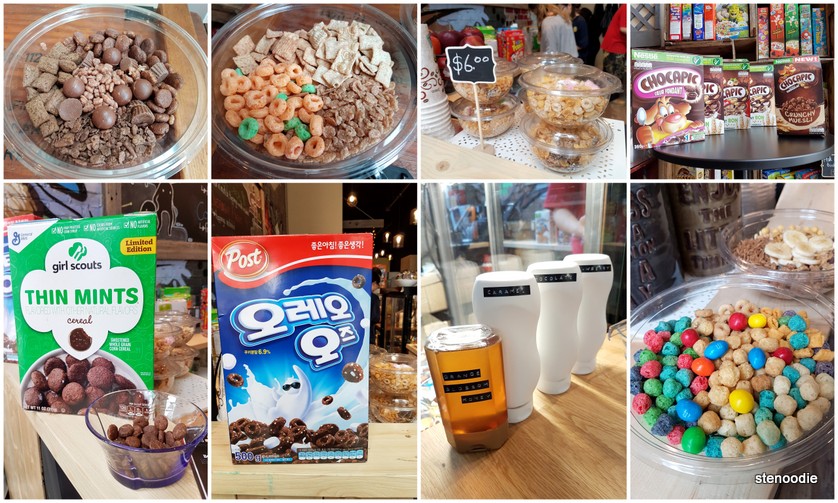 Cereals from France, from Korea, and all over the world

Of course, I was there to help them advertise their business so I filled my cereal bowl with as many types of cereal as I could.  Mine was very colourful.  I topped it off with some fresh fruits from their counter and asked for almond milk to go with my bowl of cereal. 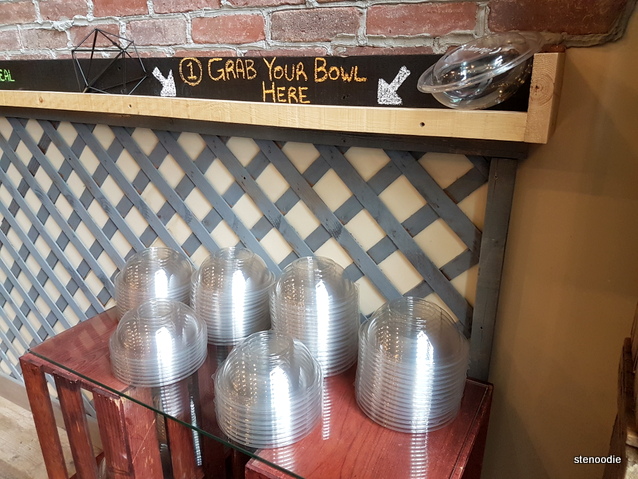 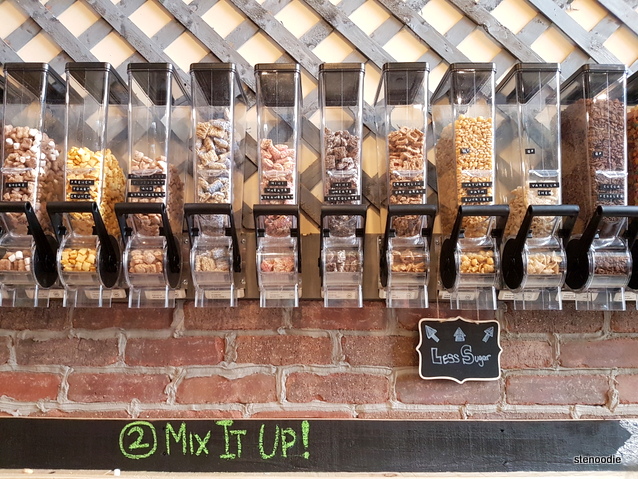 Step 2: Mix and match your cereals! 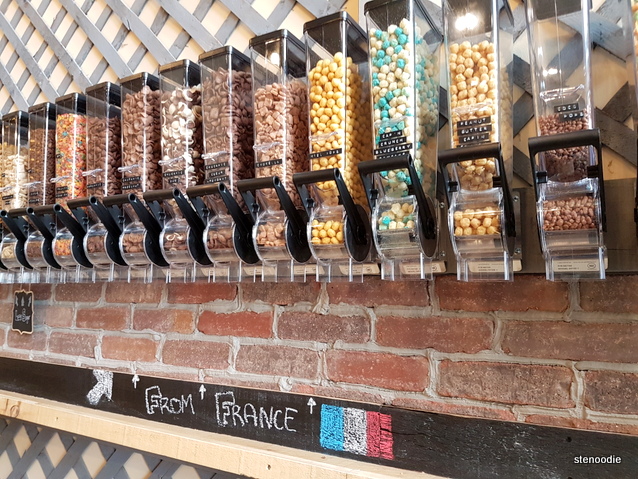 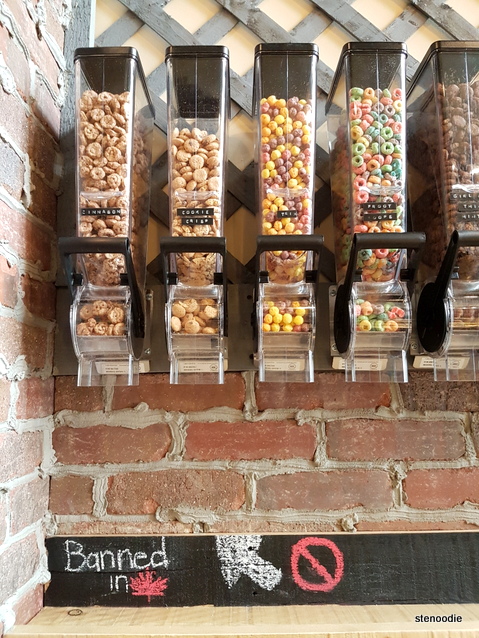 Two cereals available that were apparently banned in Canada 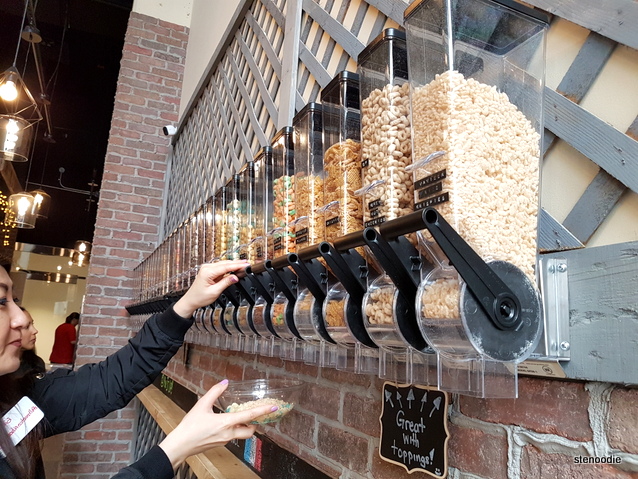 Fun! But I guess it’s not for kids because kids wouldn’t be able to reach the levers XD 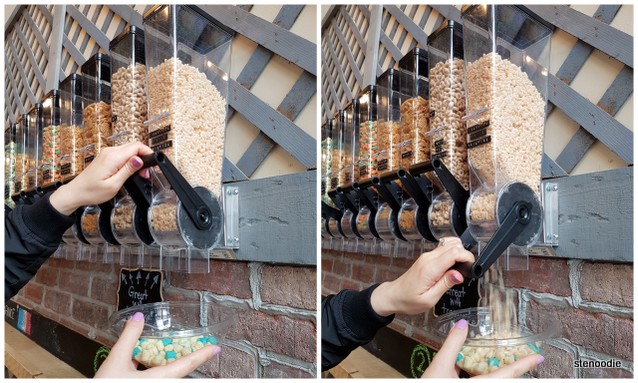 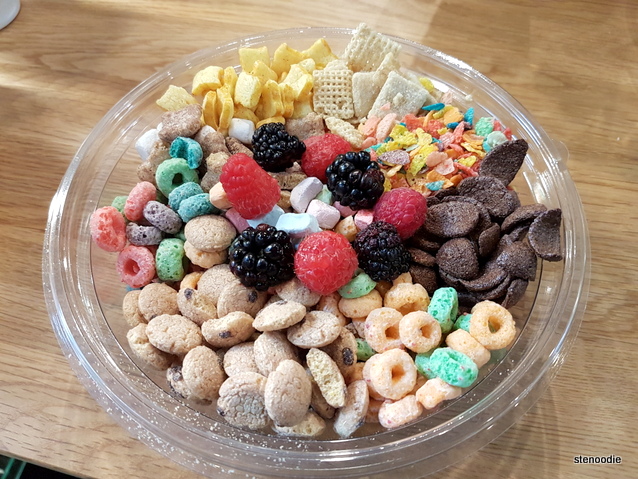 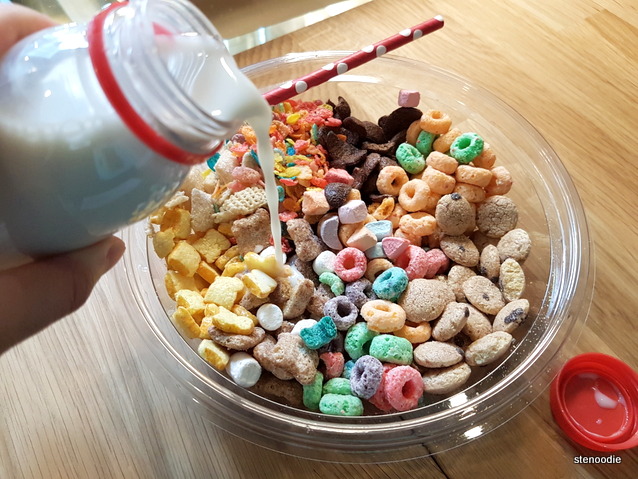 The last time I had had cereal like this was back in high school; more than a decade ago.  Many people, including myself, have shied away from eating cereal in the present day because of their high sugar content.  Unless you are eating just Cheerios or the other organic and plain wheat cereals, cereal is really not a good choice for breakfast.  The meal breakfast itself is very important to a balanced diet but having cereal (especially the colourful sugary ones) are not good for our health on a regular basis.  However, this was an exception to try out such unique types of cereals and definitely ones that I would not buy for myself to eat. 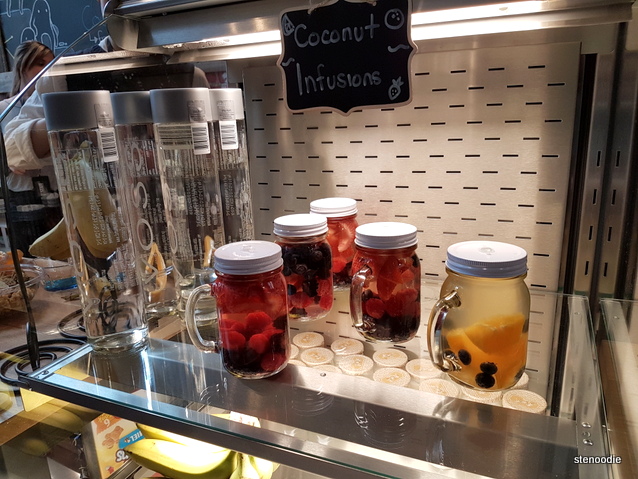 The staff at Silo 13 even created a bowl of cereal that was made to look like the Canadian flag.  I shared this photo purposefully on Canada Day this year (for the 150th celebration!). 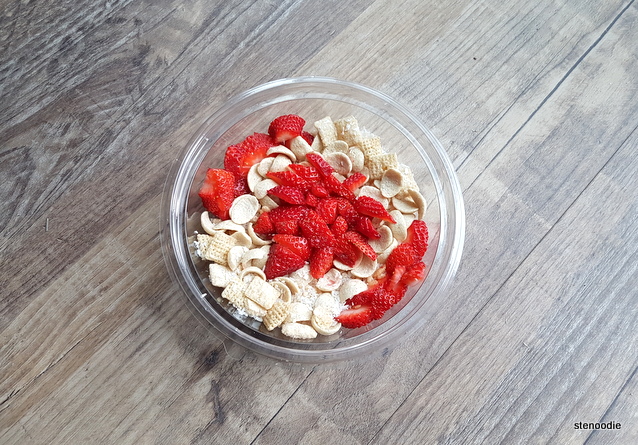 By 3:30 p.m., the event was definitely complete and I headed out to my next event.  Thank you Jojoinstameets and Silo 13 for having us there!  Unfortunately, Silo 13 closed down operations abruptly by July this year; only two months or so after they opened.  Upon closing, they also cleared away their website and all social media accounts so you won’t be able to find anything about them other than from other blogs or news outlets.  This blog post serves to preserve my memory of the event and as a recap of the media event. 🙂 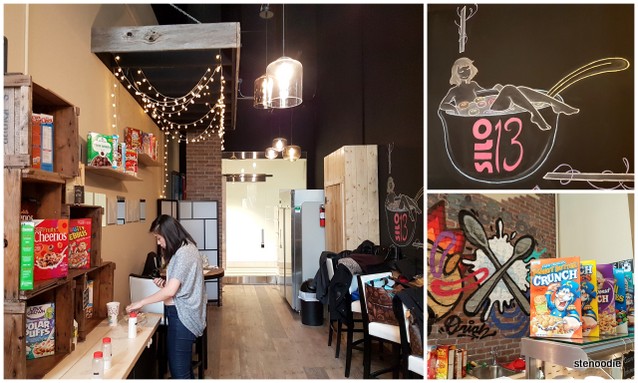 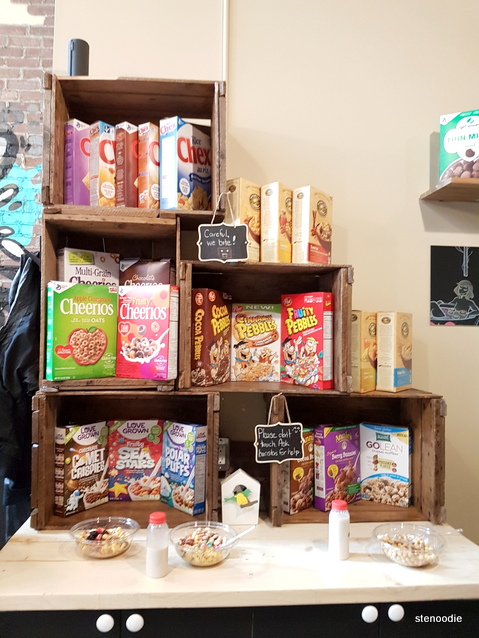 They had gluten-free cereals too! 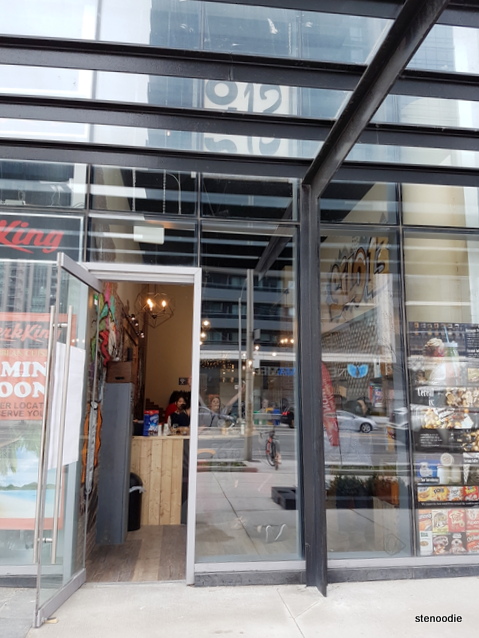 See? This was really difficult to find their storefront

FTC Disclaimer:  Although Jojoinstameets and Silo 13 invited me to a complimentary tasting, the opinions expressed here represent my own and not those of the companies.