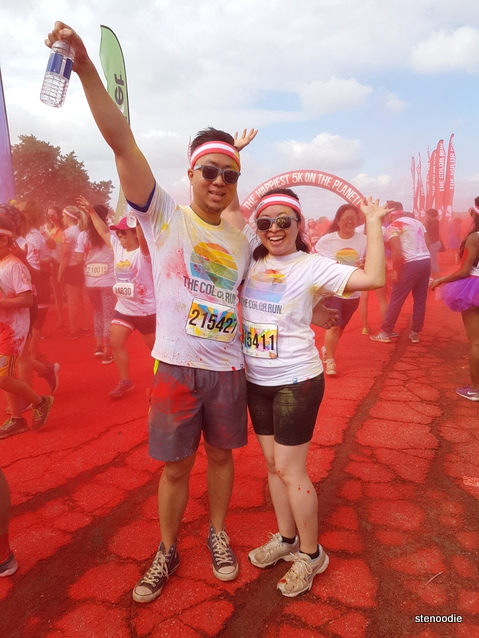 The Color Run 2017 located at 555 Rexdale Blvd in Toronto

The Color Run is a 5-kilometre run inspired by the Color Me Rad colour phenomena where coloured powder is thrown into the air or onto the participants as they participate in a 5k race!  The run originated from the states (hence the spelling of the word “color”) and is a fun run for non-competitive runners or walkers to take part in something fun during the summer.  (The concept is actually loosely based on the Hindu Festival of Colours, also known as Holi.  The festive colours used are a sign of winter’s end and spring’s new beginnings.)

Ken signed us up for this race way ahead of time with two other friends so that we could take part in the discounted admission fee as a team of four.  We had been looking forward to this event and running with colours all over our clothes. 😀

The Color Run was held at the Woodbine Racetrack in Toronto.  The race was slated to begin at 9 a.m. that morning on Saturday, August 12.  We were advised to go there early from 7 or 8 a.m. in order to find parking and check in.  We also picked up our race kit that day since we hadn’t had time to do so earlier in the week.

When we got there, we were lucky to enter in a different area of the parking lot which allowed us to park quickly.  We witnessed a lot of other cars all jammed together to enter the Woodbine Racetrack parking lot.

We saw all of the other excited participants from afar as well as the pink unicorns and other colourful decor for the event.  There were some participants who dressed up in the theme of unicorns with tutus and costumes too. 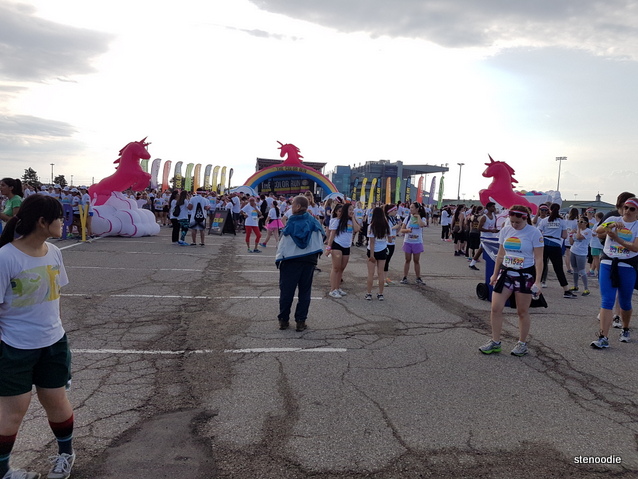 Morning views. You can see the giant unicorns in the distance

The line-up to get our race kits was long but it moved quickly.  Our race kit included a logo T-shirt, Color Runner headband, a blank bib, sample Biore products, and pins for us to attach the bib on to our T-shirts. 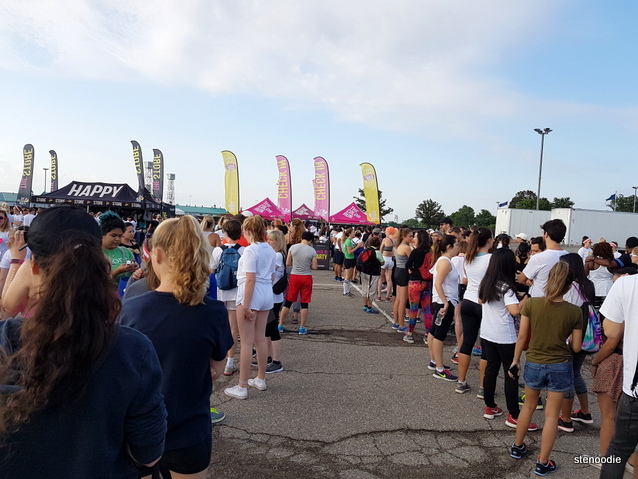 The line-up to check in to receive our race kit 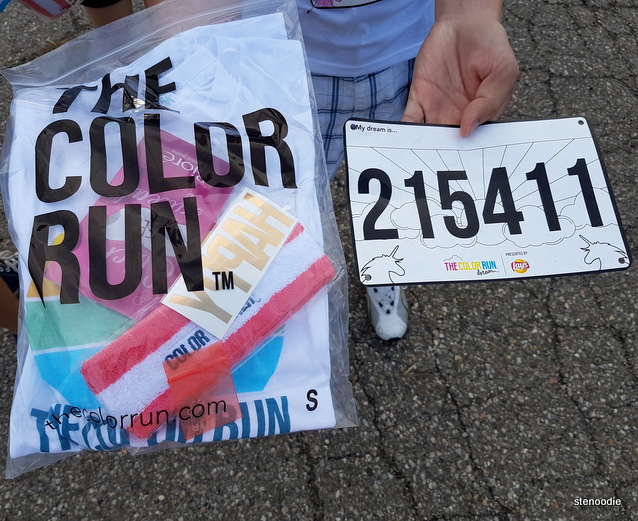 I’m glad that we arrived early enough so that we could go to the Bib Colouring Station to get our bibs coloured in.  There were a lot of markers available for us at the station to make our bibs as pretty as we wanted them to be.  It was fun.  Someone even caught a great photo of us in a colouring station train. 😀 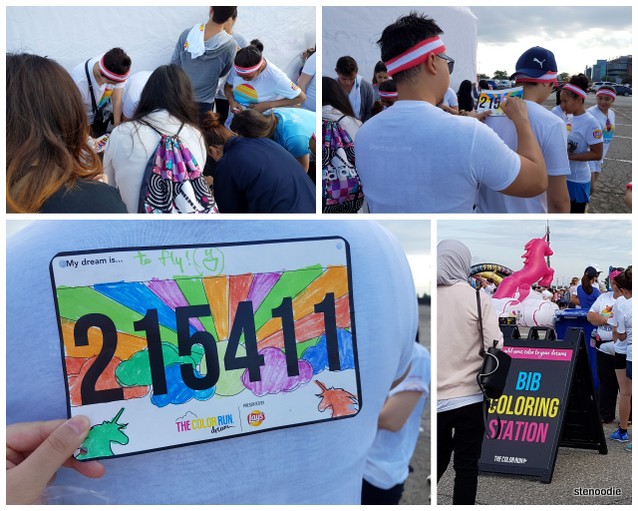 Colouring our bibs in at the Bib Coloring Station 😀 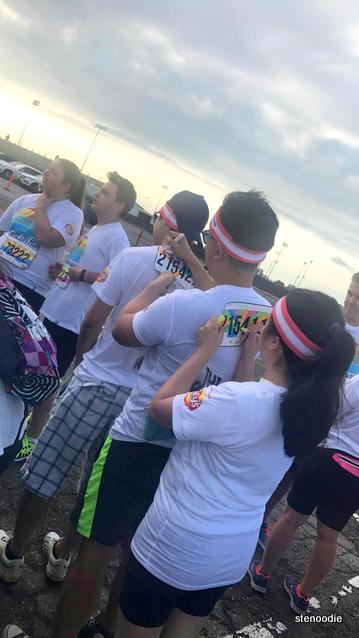 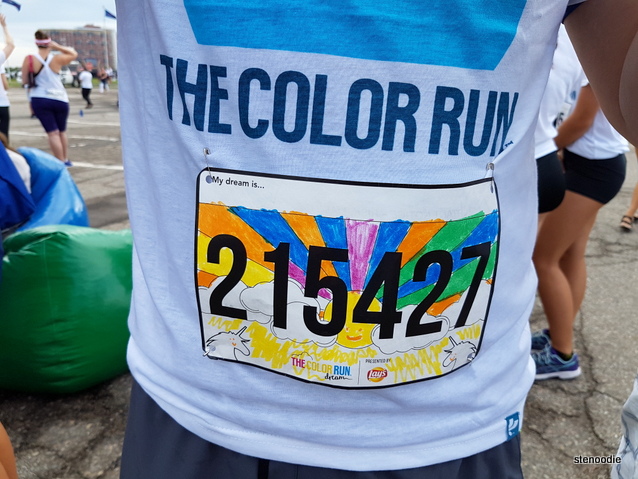 Once we were done colouring in our bibs, we were ready just in time for the warm-up that was led by someone on the stage.  This was a really fun warm-up. 😀 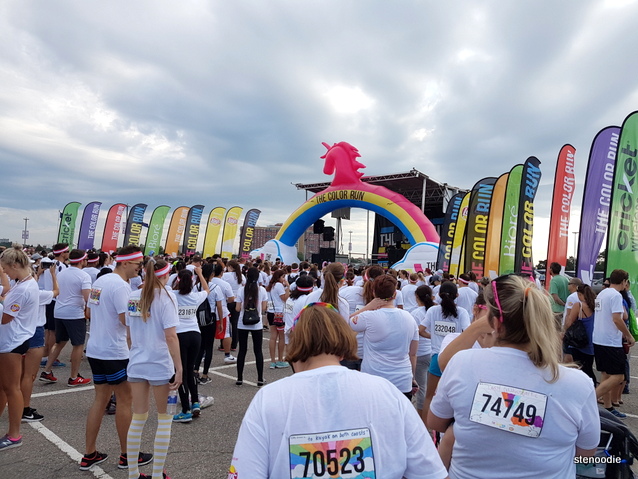 By 9 a.m., we moved towards the start line with many others.  We were a sea of white, clean, crisp T-shirts that were ready to be coloured in.  There was a lot of excitement at the start line and the announcer did a great job at raising our spirits with songs to dance and sing to.  The participants began racing in waves so that not everyone was rushing simultaneously at the start line. 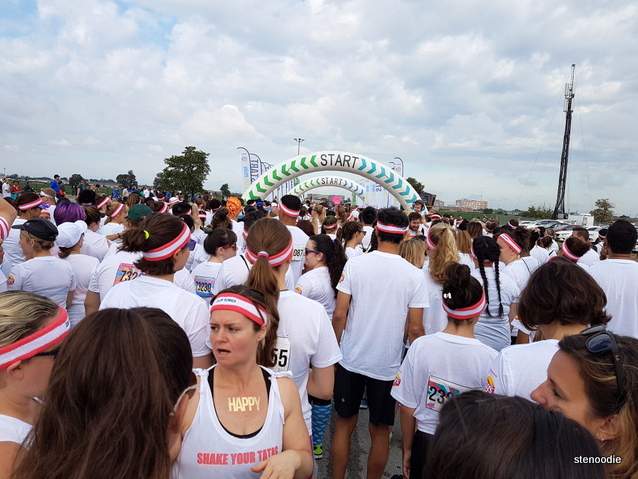 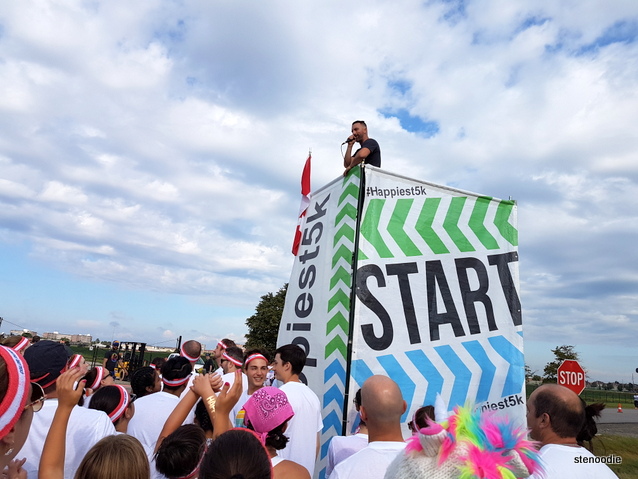 Enthusiastic announcer hyping the energy up 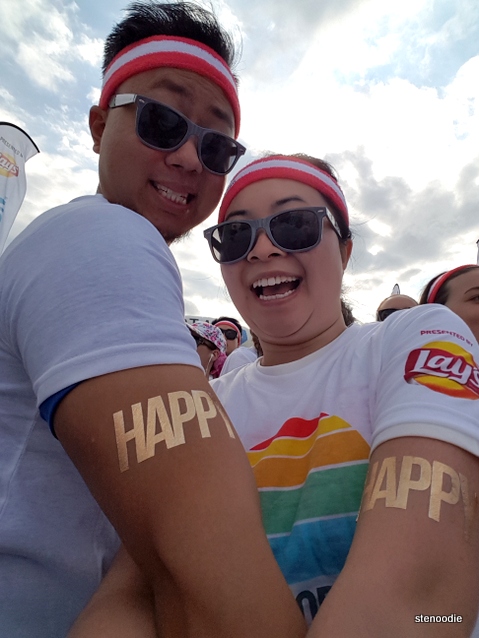 I’ve done a 5k race before but it has been a while.  I actually underestimated how “far” it was.

The first colour station was purple!  We got doused in purple powder and got to take a photo with a pretty unicorn too.  It was a really great day for jogging!  It was a little cloudy yet sunny enough to be bright (no direct sunlight) and very breezy.  Perfect jogging morning! 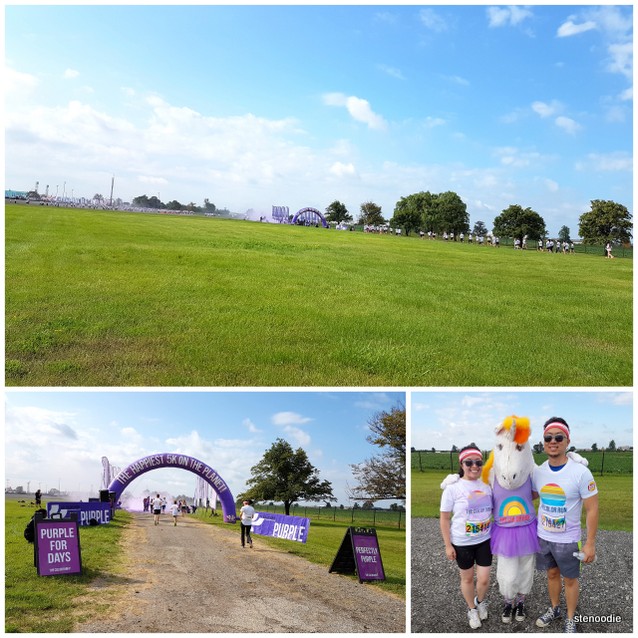 Purple Station and photo op with a unicorn!

The track curved through some grass and towards the sidewalk and through a bridge and back again towards the start line.  The second station was actually the foam station!  This was so cool.  There was foam blowing out and everyone was covered in foam as we passed by.  It was really fun and our shoes were covered in foam bubbles too. 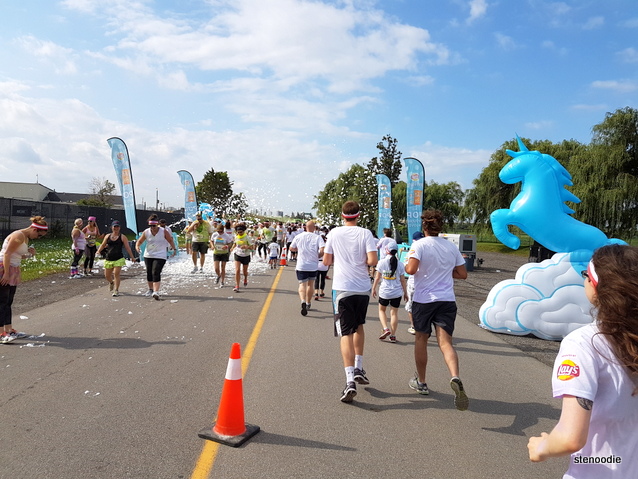 The second colour station was yellow!  A lot of it stuck to our skin quite well actually and if you were lucky, you might have received a huge dusting of yellow powder up your nose too.  XD 😛 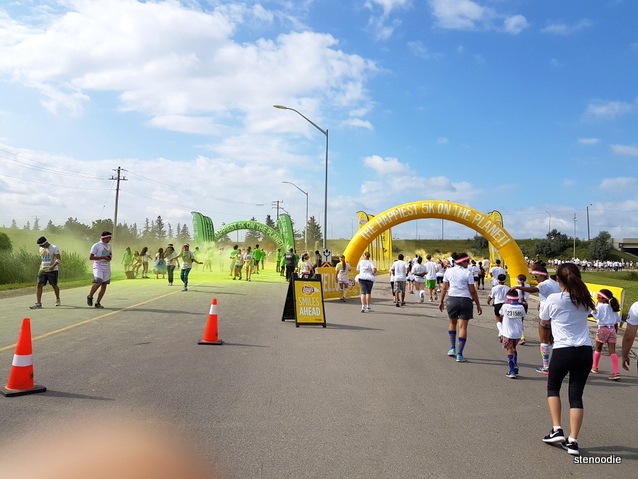 Yellow and green stations right next to each other

There was a water station at the mid-way point.  I think it would have been better for the environment if they used paper cups instead of rather sturdy plastic ones that were very nicely printed with the Color Run logo.  Is that really necessary to budget for nice cups for something that were used only for 5 seconds?  People just drank a few sips of water and then the otherwise untouched cups went straight into the trash. 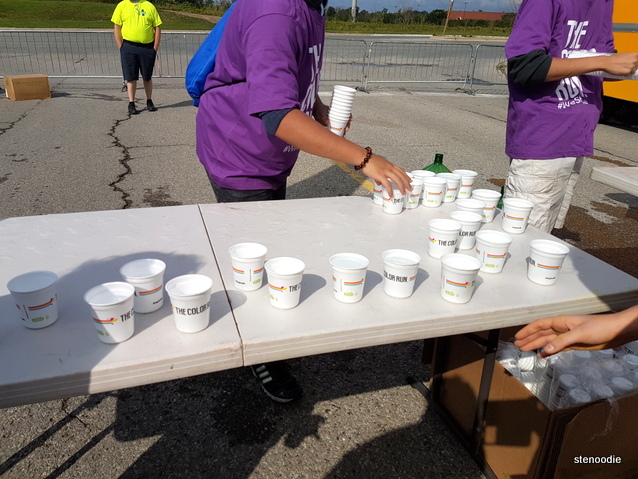 We continued jogging/walking along the track and we got pink and green powder before going through the foam station again.  This time, we took more time taking photos.  My phone was all covered in foam too but it was still safe from the moisture (and worked normally after the whole race). 🙂 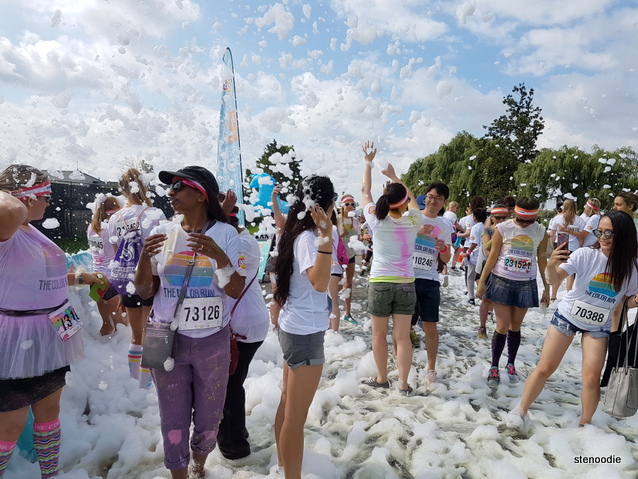 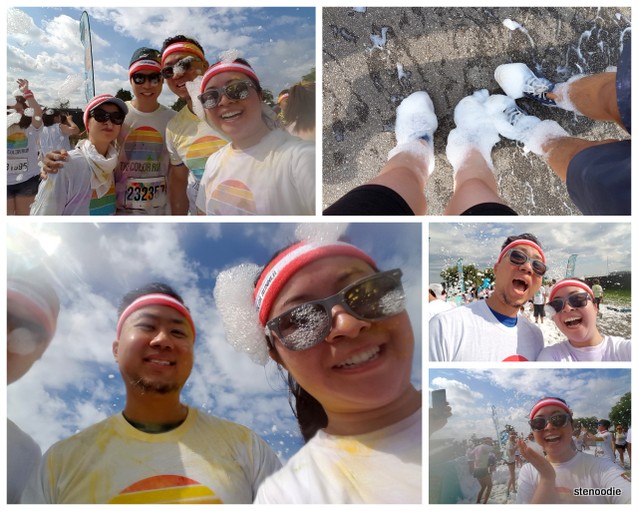 My glasses and phone were all fogged up XD 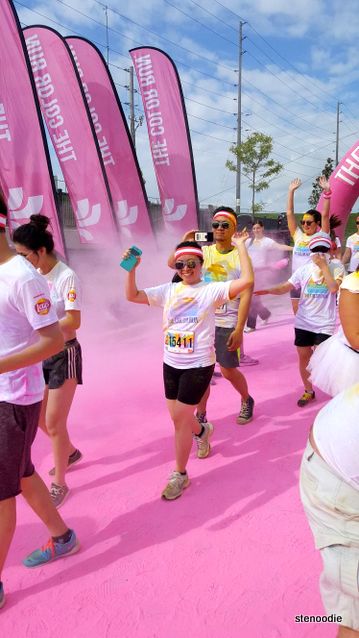 Thanks Kent for this photo!

The final colour as we approached the final line was red!  Once we crossed the finish line, we put our hands up.  V for victory! 😀 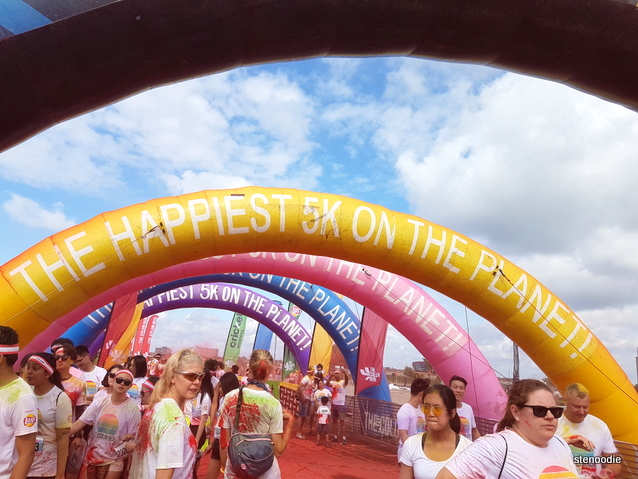 Happy colours at the finish line! 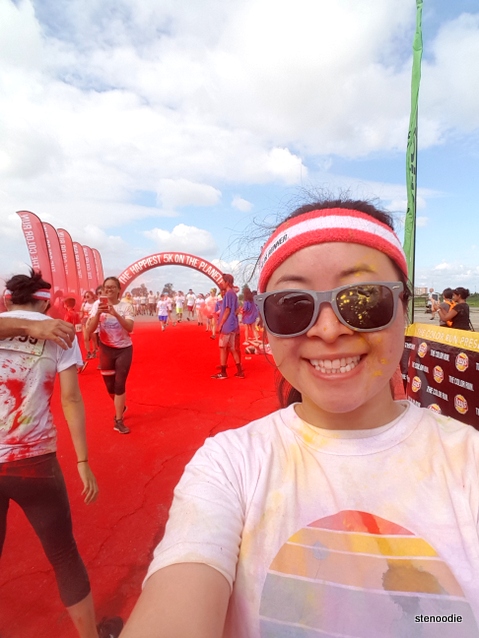 Selife at the finish line! 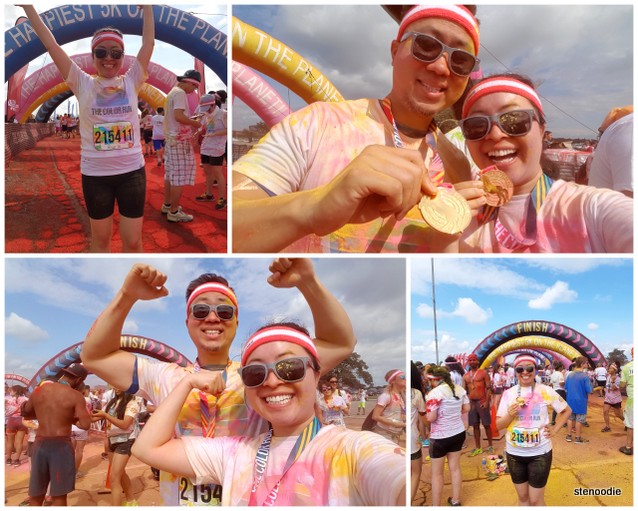 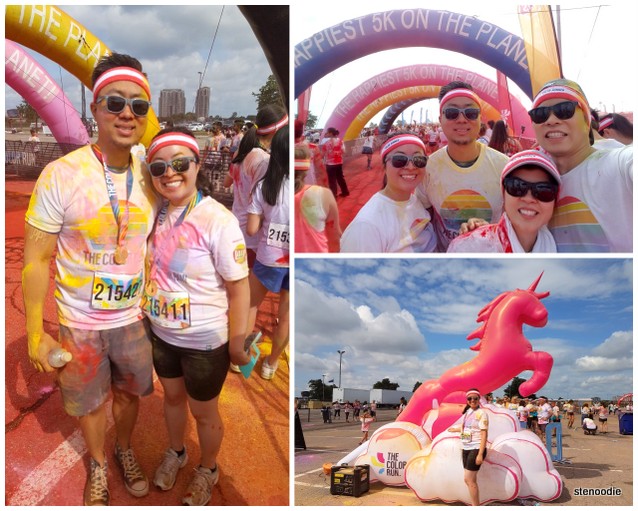 We received the Unicorn Finisher’s Medal and a colour packet to play with too.  This was a final hurrah to douse ourselves with more coloured powder. 😛 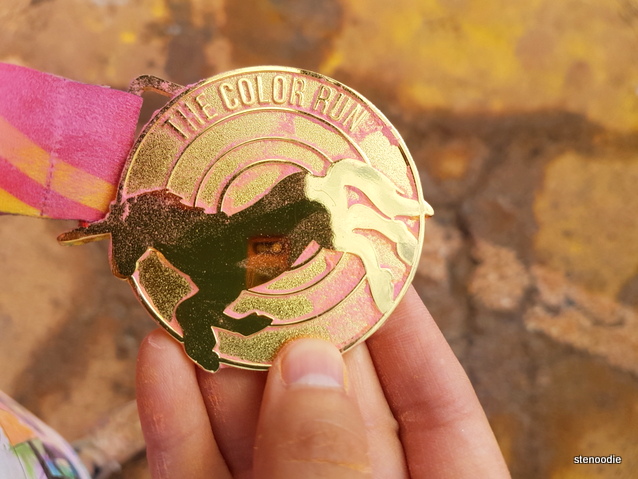 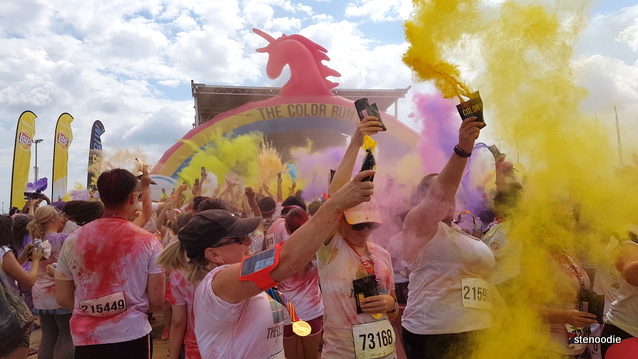 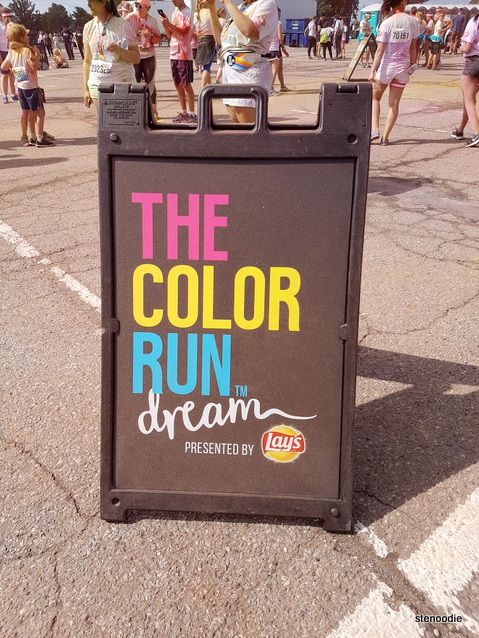 Although the Color Run was heavily sponsored by Lay’s (who was promoting their Poppables chips), the promised samples were ironically all passed out by the time we finished the race.  It wasn’t like we were the last ones crossing the finish line either.  They must have not prepared enough sample packets to pass out, which I think is really unprofessional considering that they were the one big sponsor for the race.  The announcer guy at the start of the race was very diligent in repeating for each wave of racers that Lay’s was the sponsor too so why did they run out of Poppables samples so early in the day?  They should prepare more of the sponsored products in future events. 😛

Biore was also handing out sample versions of their cleanser.  Aquafina was also a sponsor but didn’t have bottled waters for us. 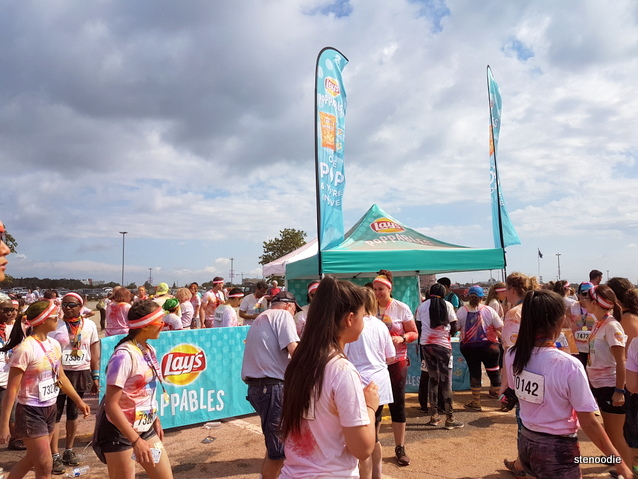 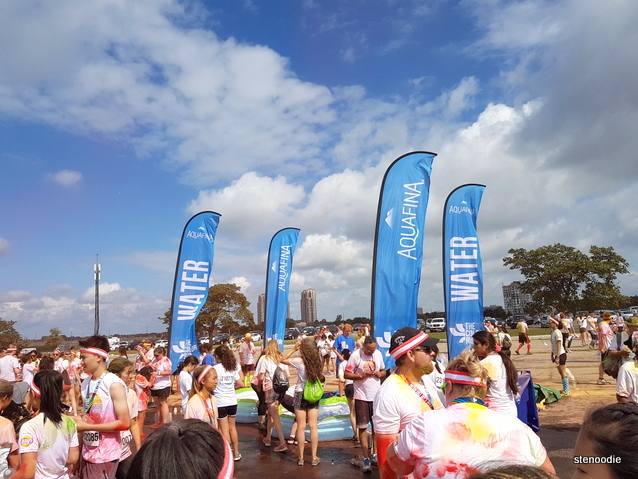 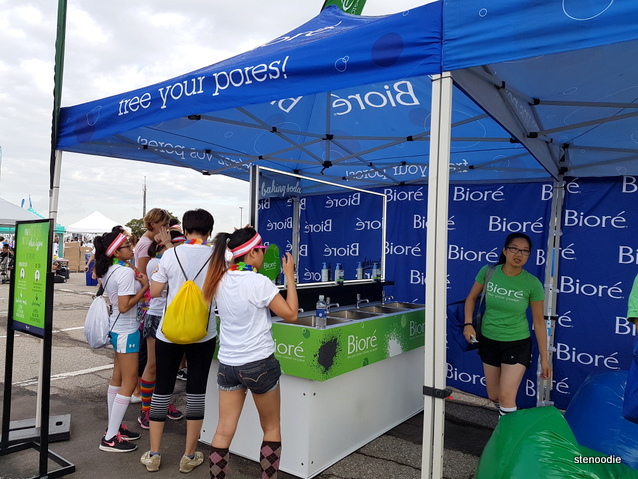 We took some more photos in front of the highly Instagrammable unicorn displays before we cleaned ourselves up a bit, changed, and went for sustenance.  It was a really fun race and I’m so glad that we got to do it. 😀

For sustenance, we went to the food court at the Woodbine Racetrack.  We had their lasagna and southern style Chicken & Waffles which was all really good and filling.  Mmm. ^_^ 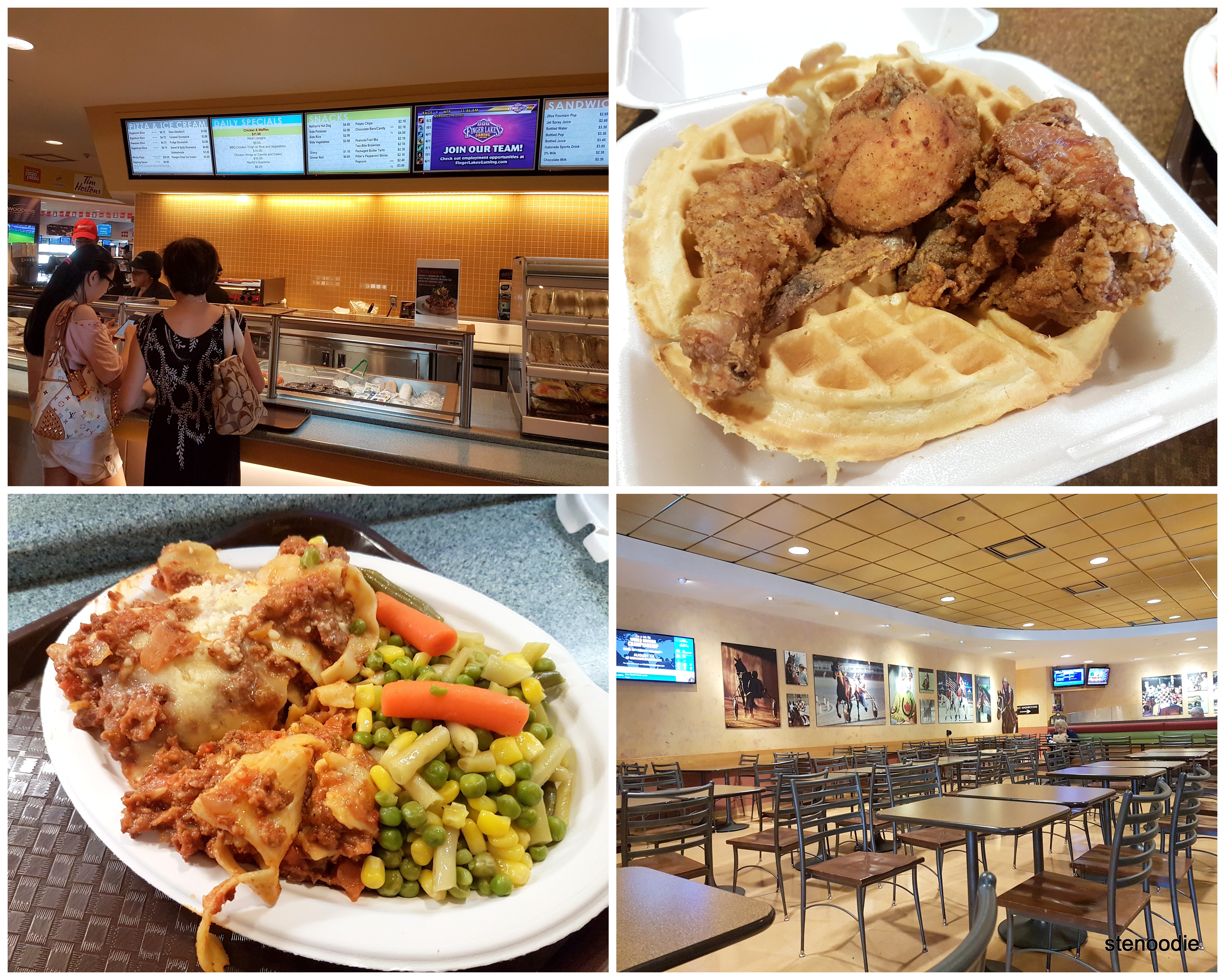 Delicious food at the food court at Woodbine Racetrack

Now that I have done a 5K race again, I’m looking forward to completing more fun runs in the near future! ^_^