Winning a Lucky Dinner for 2 at Baxters Landing 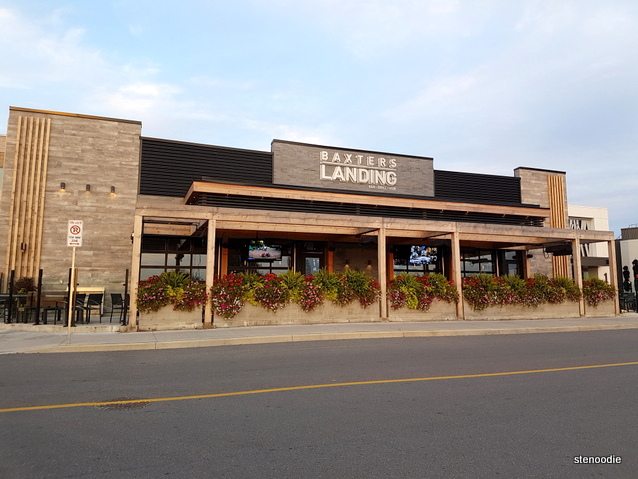 October 8, 2017:  In September, I was lucky enough to win an Instagram contest for a free dinner for two at Baxters Landing in Oshawa, Ontario.  This was perfect since I had wanted to see the salmon run in Port Hope and it allowed us to have a short getaway trip to Oshawa for the Thanksgiving long weekend while getting to claim this dinner prize too.

The contest holder, @to_finest, and Baxters Landing carried out the contest process out smoothly and easily for me.  They private messaged me with the announcement that I had won upon picking the contest winners and informed me that I could visit the restaurant at any time to claim the dinner prize.  When I called in to book the reservation, they also made the prize redemption process so effortless.  I simply had to leave a message with the manager who confirmed my dinner reservation.  They were very celebratory for me that I had won the prize and it made me feel like a valued customer already.  We made our dinner reservation for 7 p.m. on the Sunday but arrived early to the restaurant by 6:30 p.m. to get a head start on the early dinner.

This was my first time to the Landing franchise restaurants.  It was a very modern, casual, and chic space with lots of seating, booth seating, and a large bar.  Baxters Landing was located at the Oshawa Centre.  As it was the Thanksgiving long weekend, the restaurant was quite devoid of many customers — probably because a lot of locals opted to celebrate their Thanksgiving traditions by staying at home and enjoying a meal in.

Our server was very friendly and attentive that night and came by to check up on us often.  She also congratulated us once more on the prize winning as she led us to our table.  The manager that night (not the one who helped me to book the reservation) also gave us a friendly check-up. 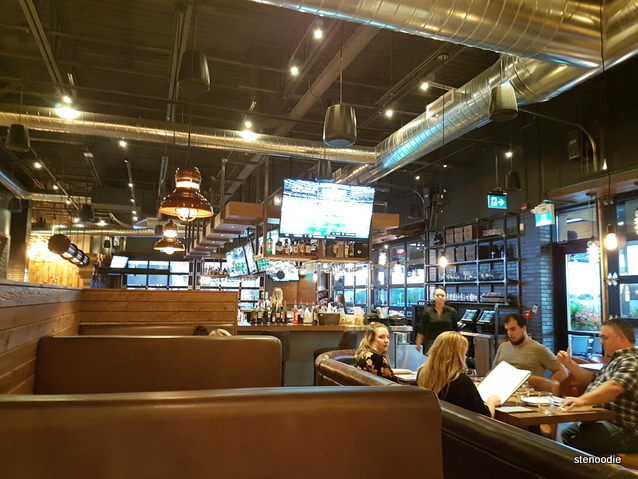 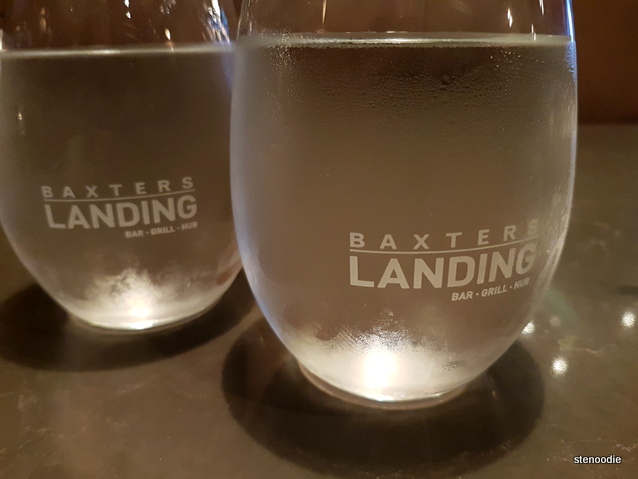 It was extremely nice to know that there weren’t any restrictions on the dinner prize; we could technically pick anything from the menu that we wanted (within reason).  This included alcoholic drinks too!  In fact, since Baxters Landing is a bar and grill (they have a wide variety of alcoholic drinks), they definitely encouraged us to order more than one round of drinks too.  We were so lucky to be able to enjoy this meal on the house! 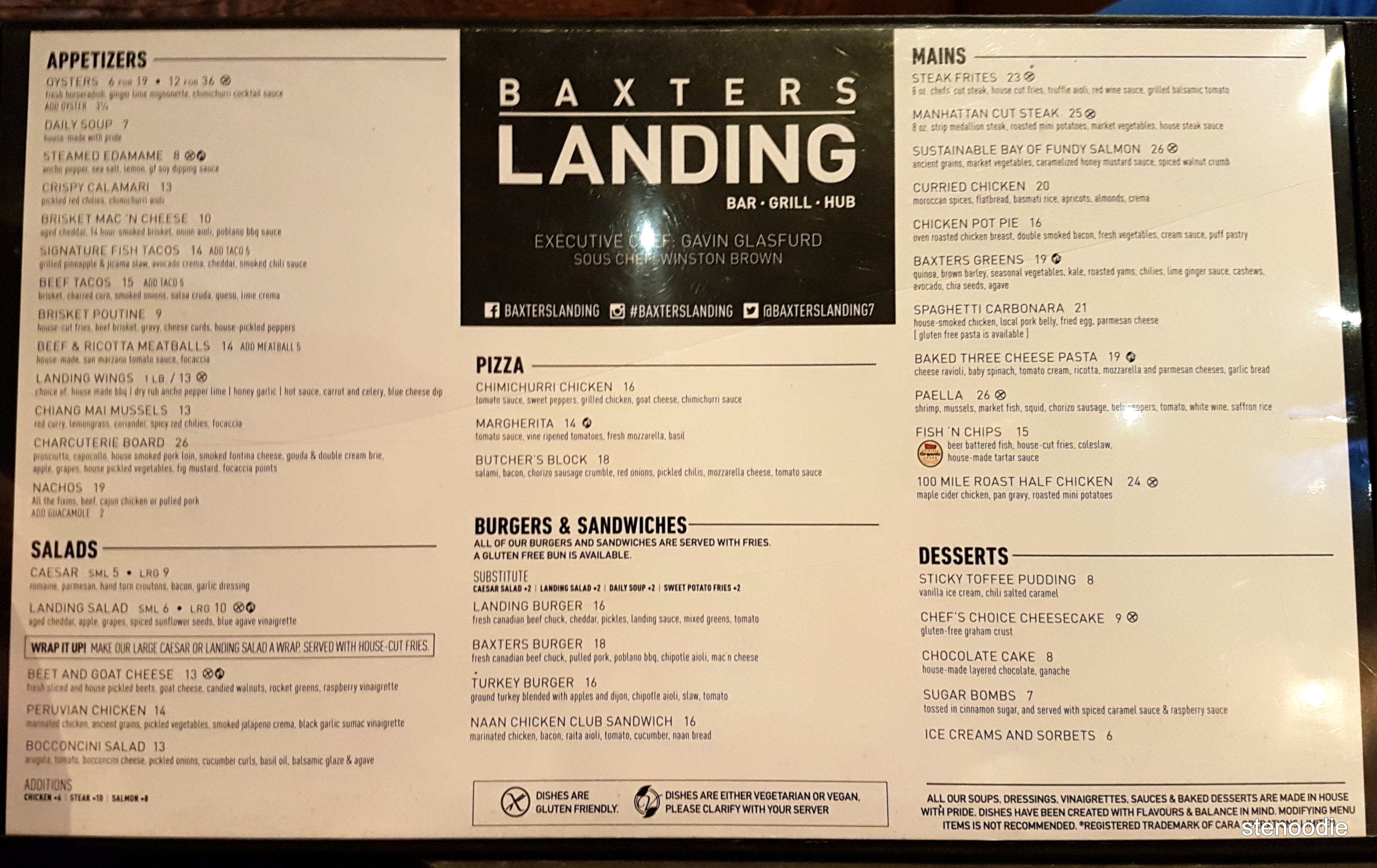 We started off with drinks.  I ordered the Baxters Caesar.  This was a bacon and pepper infused vodka with house spiced clamato caesar mix, topped with an extreme bean, almond stuffed olive, and jalapeño havarti.  This was really, really good!  The bacon and pepper infused vodka and house spiced clamato caesar mix was the perfect blend of spicy and caesar.  I liked the extreme bean too, which I’ve had before at the Gourmet Food & Wine Expo last year, and the havarti. 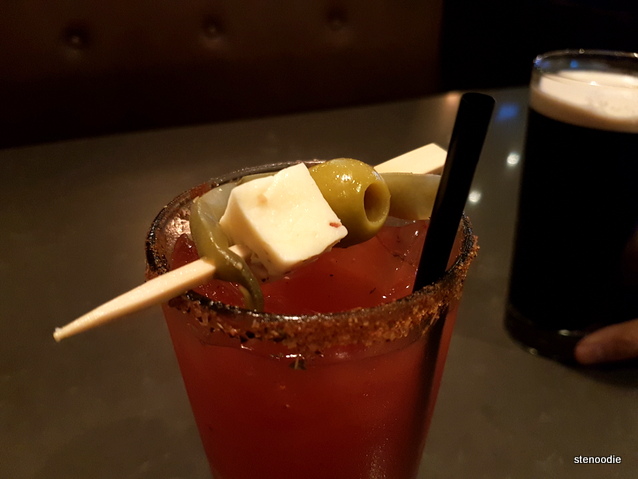 Ken ordered a pint of Guinness which was so good.  It was so smooth! 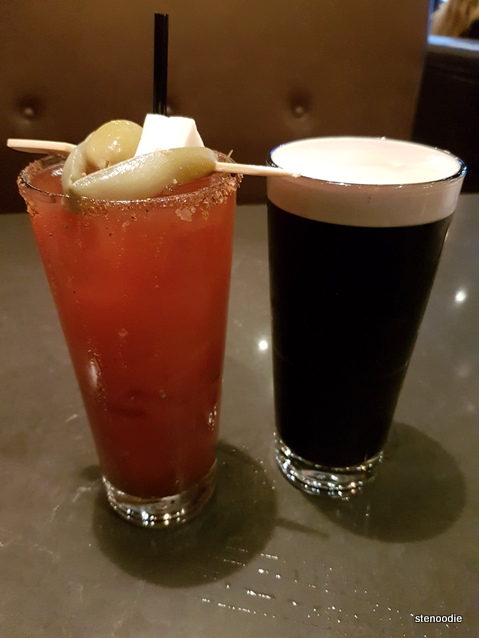 For food, we settled on two appetizers, a salad, and two mains.  When the server took our order, she asked if we wanted to order the mains later (which turned out to be a great idea), so we only placed the order for the appetizers and salad first.  I say this because as we ate through the starters, we realized we were full enough to not have to order any mains — more on this later. 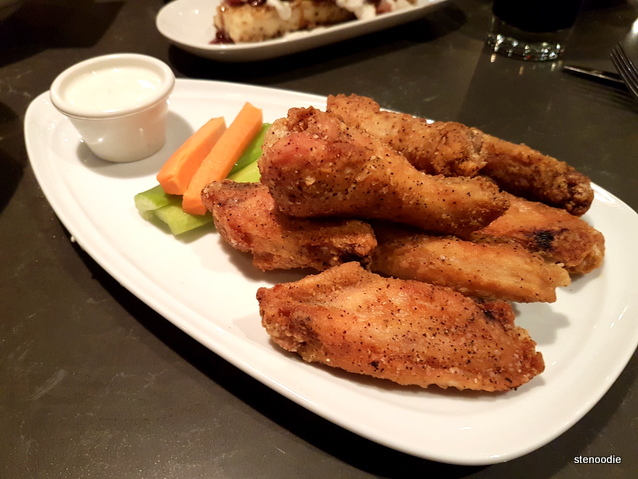 The Brisket Mac ‘N Cheese called its name out to me when I was browsing the menu.  This had aged cheddar, 14-hour smoked brisket, onion aioli, and a poblãno BBQ sauce.  This turned out to be a small portion — which was perfect for us!  Despite it being a brisket and mac and cheese dish, it actually didn’t taste too heavy at all.  The mac and cheese was arranged in a long rectangular shape on the dish with the brisket and onion aioli on top of it.  The smoked brisket was really good!  The tastes and flavours came together well.  The mac and cheese was a little mushy and actually didn’t have too much cheese flavour to it.  It was a successful comfort food dish. 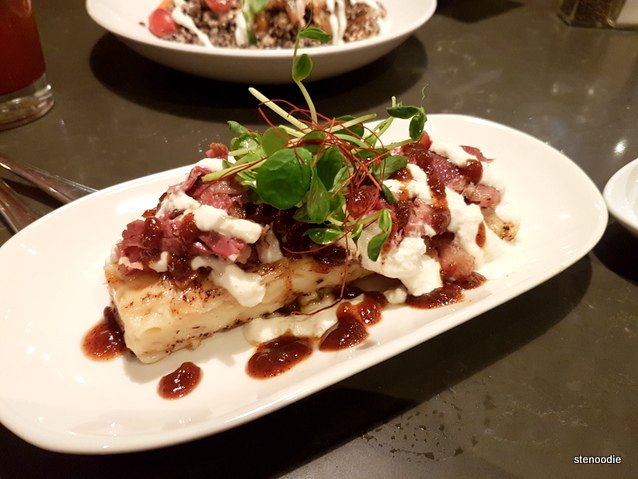 The Peruvian Chicken Salad was gorgeous.  It had marinated chicken, ancient grains, pickled vegetables, smoked jalapeño crema, and a black garlic sumac vinaigrette.  I was impressed that the chicken was moist and wasn’t tough at all.  It was a very good salad! 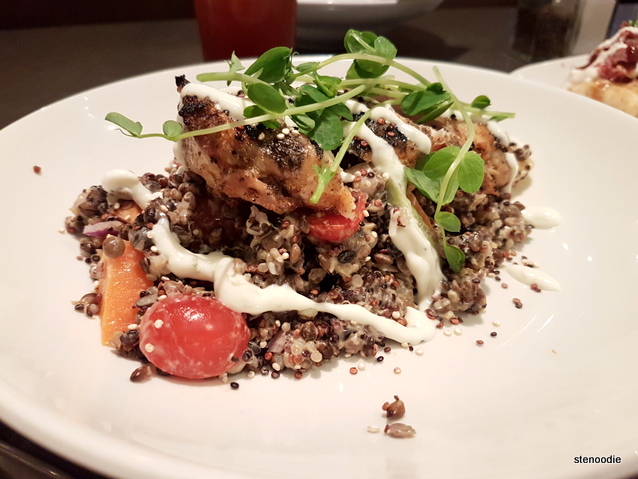 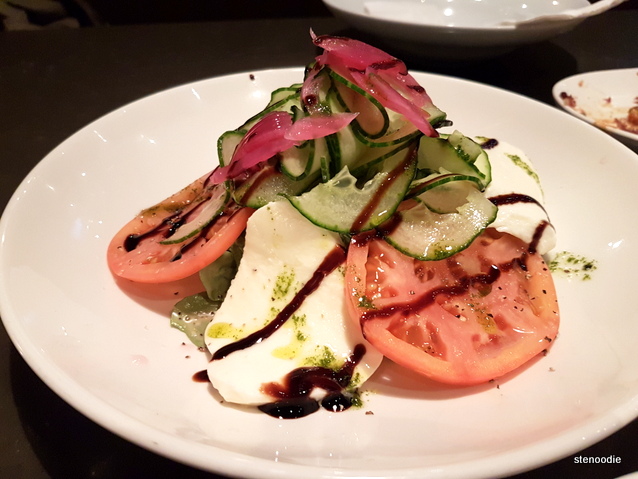 While we were eating these starters, we realized that we were getting full already and were so glad that we hadn’t placed our mains order at the very beginning.  In my mind, I had wanted to order their Chicken Pot Pie (as I love comfort food) and Ken had wanted to order their steak. Instead, since we wanted to finish the dishes and didn’t want to overeat, we just decided to add another salad to our table.  Yay for more veggies!  I ordered the Bocconcini Salad.  This had arugula, tomato, bocconcini cheese, pickled onions, cucumber curls, basil oil, balsamic glaze, and agave.

This was a very refreshing salad.  The bocconcini cheese was new to me.  It was firm and flat and tasted like a combination of mozzarella and ricotta to me.  It was another good salad.

After this, we were satisfied and very full.  In my view, we actually didn’t take full advantage of our free dinner since we didn’t even order any mains but we were full and very content with what we ate. 😀 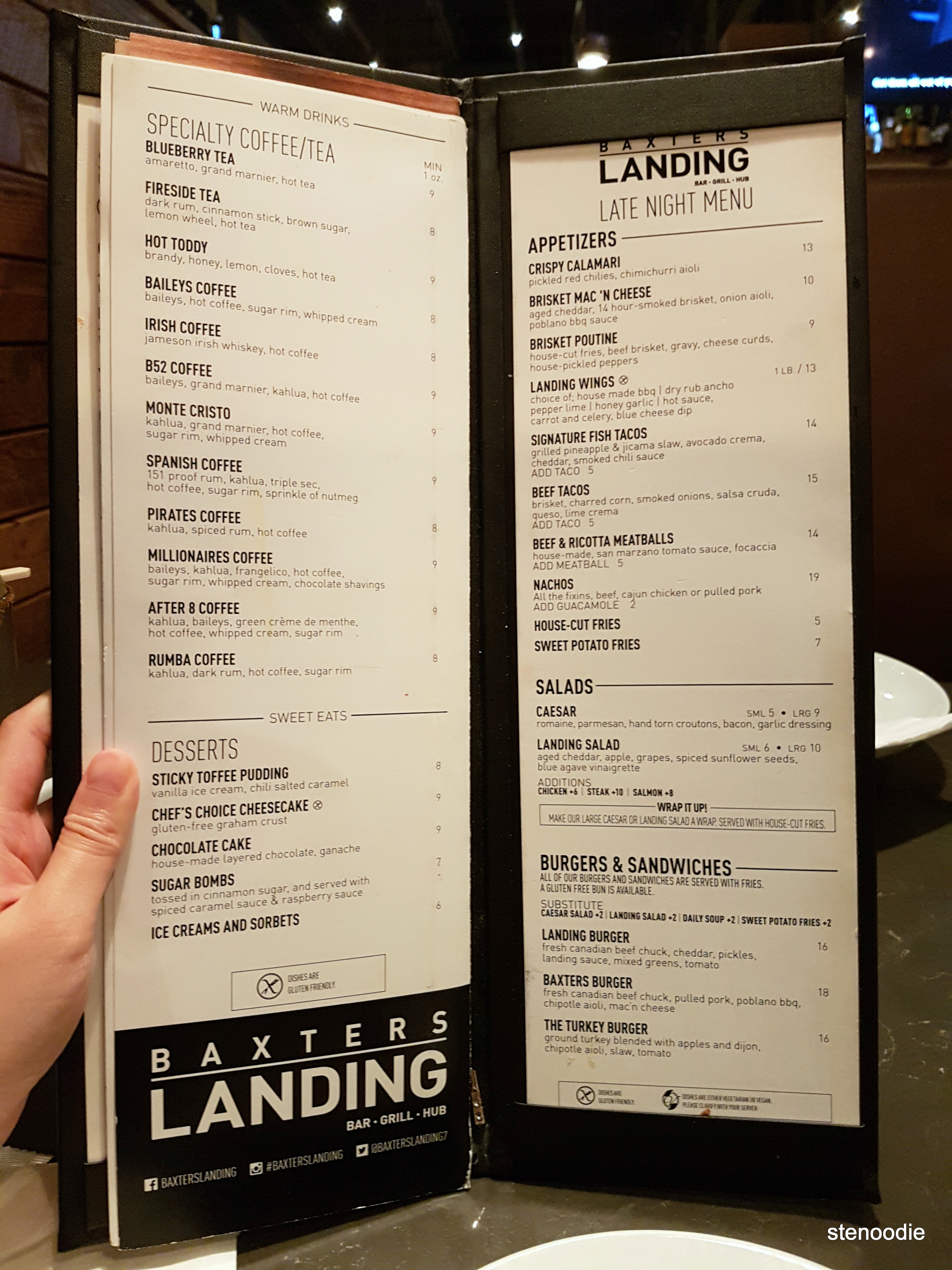 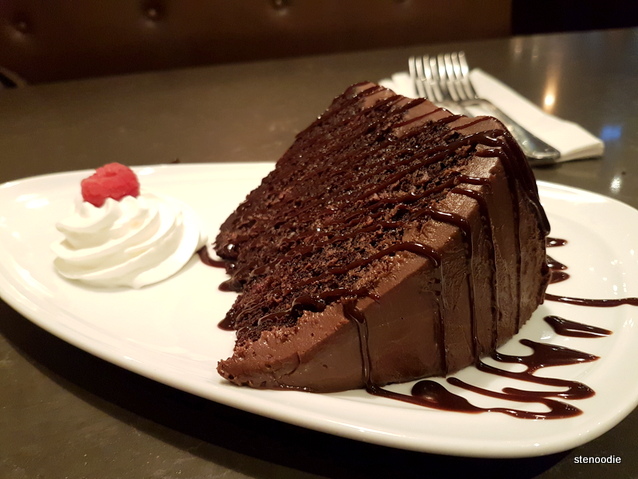 At the very end though, even though I was full, I did want to enjoy some sweets.  Thus, I ordered the Chocolate Cake.  (We had entered the late night menu point at this time too; we had been enjoying our meal at a very leisurely pace. 🙂 )

The Chocolate Cake here at Baxters Landing was a definite classic and a very chocolaty cake.  I really loved it!  It was a house-made layered chocolate cake with ganache.  It was so dense, so moist, and so perfect.  If I could have any chocolate cake for the rest of my life, this one might be it.  It was incredibly decadent and I enjoyed it so much.  That being said, because it was so dense and moist, it was even more filling.  We had to pack the leftovers in a doggybag/box afterwards to take home.

I want to thank to_finest and Baxters Landing for providing me this wonderful opportunity to eat at their restaurant for free and with such generosity too!  I liked the wide variety of menu items and can definitely see myself returning to try their other dishes.  We definitely didn’t take advantage of the free meal to the max though.  XD 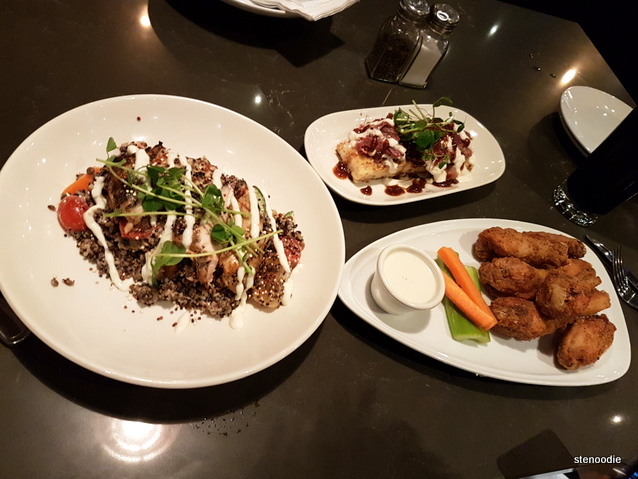 FTC Disclaimer:  Although Baxters Landing provided the meal  free of charge via winning an online contest, the opinions expressed here represent my own and not those of the restaurant or contest host.