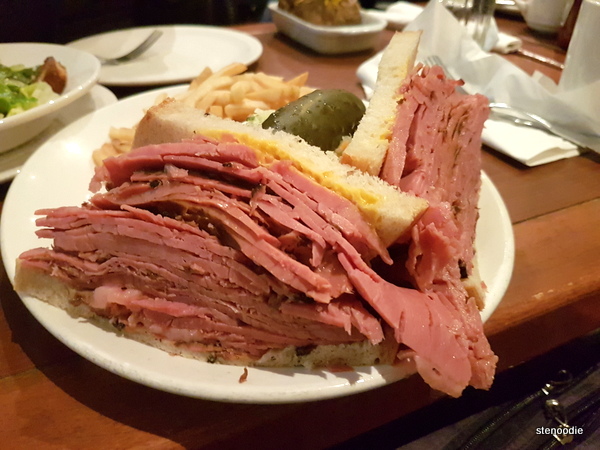 February 12, 2018:  I can’t believe we actually came here for dinner!  It was the first night of our three-day tour and dinner was not included.  Thus, we were given the opportunity to explore the surrounding areas near the Sheraton Hotel to eat.  Right away when I saw that we would be within the Sheraton Hotel area on the map and saw Reuben’s Deli & Steakhouse, I knew I wanted to go there to try it out.  I wanted to try the smoked meat there and compare it to Schwartz’s.  However, I wasn’t sure if the rest of my family would be down for it since they’re usually more selective about restaurants when travelling.

However, we did end up eating here after I was asked for dinner suggestions and they were willing to try out this local well-known smoked meat place.  Yay!! 🙂

We entered Reuben’s Deli on St. Catherine Street around 8 p.m. and informed the hostess we were a table of 11.  We only had to wait a few minutes to be seated. 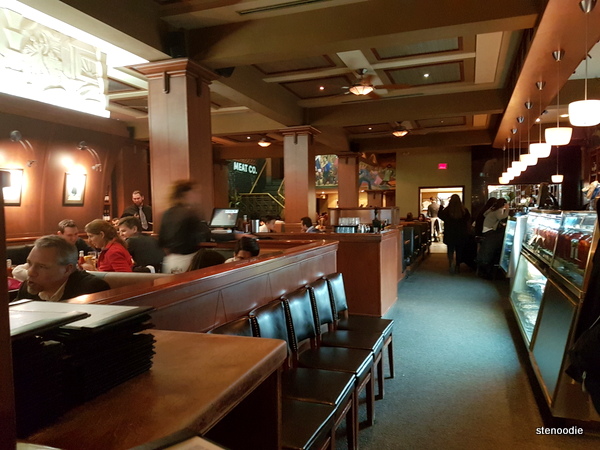 View of the restaurant while waiting for our table 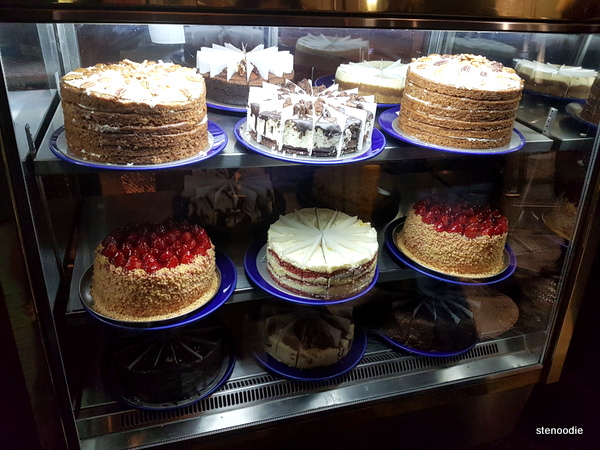 Lots of desserts on display

When our server arrived with a tray full of ice waters, I told him that we won’t be needing that as our table would like hot waters instead.  Two of my cousins did go for the cold waters he had on his tray which made me look like I was trying to troll the server….

I already knew what I wanted to order — the smoked meat sandwich of course!  Thus, my mom and I shared the Famous Super Sandwich (their 10 oz sandwich) with an extra Baby House Salad as a side.

After everyone at the table had decided on what to order, the server came by.  We had previously decided amongst ourselves that we would be paying individually and thus I told the server, “We will be paying individually, so we’d like to request separate bills please.”  The server replied something along the lines of, “Sure but you haven’t ordered yet.”  I replied, “Well, I just wanted to let you know before we placed our orders.”  ….  Uh, I was informing him that before we placed our orders because oftentimes, servers prefer that the request for separate bills be announced prior to ordering.  My intention was simply to make our request clear at the outset instead of announcing it at the end.  I didn’t like this server’s smartass remark already.

Anyway, we placed our orders and at the very end when everyone was finished, it was established that each family would pay for themselves.  My cousin confirmed this with the server.  Although the server wasn’t speaking to me at this point, I overheard the server saying to them, “It’s a little confusing when one person says for the table to want separate bills and then another wants the bills to be paid per family.”  I heard this and felt it really wasn’t necessary to voice that part again.  A more professional server would say, “So to be clear, not individual bills anymore but separate bills per family; right?” instead of the backhanded comment he said.  Rude.

Anyway, it did take some time for the food to arrive.  This wasn’t a problem to me because we had the whole night to ourselves and weren’t rushed but for some of my family members who were hungry and not used to waiting for all the dishes to come at once (which is the habit at western restaurants compared to Chinese ones), they were getting frustrated with the long wait.

Fortunately there was free wifi to tide us over with while we waited.  The food in actuality took around 20 minutes to arrive. 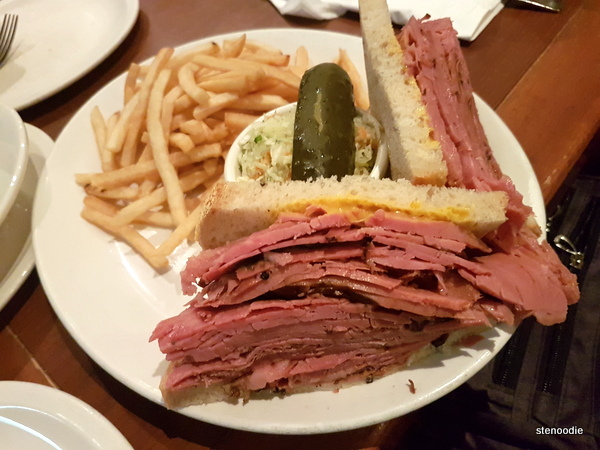 The Famous Super Sandwich came with fries, coleslaw, and a pickle.  It was a 10 oz sandwich “piled high” and served on rye bread with mustard. I  was so excited to get my hands on it and dig it! ^_^

The smoked meat was actually quite good.  It was tender and moist.  The rye bread was a bit soft with the mustard on it.  I ate it quickly to avoid the moist rye bread from falling apart.

I liked how big of a portion the meat was!  It was quite good. 🙂

I’m glad we shared this between the two of us since I definitely wouldn’t have been able to finish one whole sandwich by myself.  (Glad that the sandwich was already split in half.)

The portion of fries was soooo impressively large.  They were skinny fries. 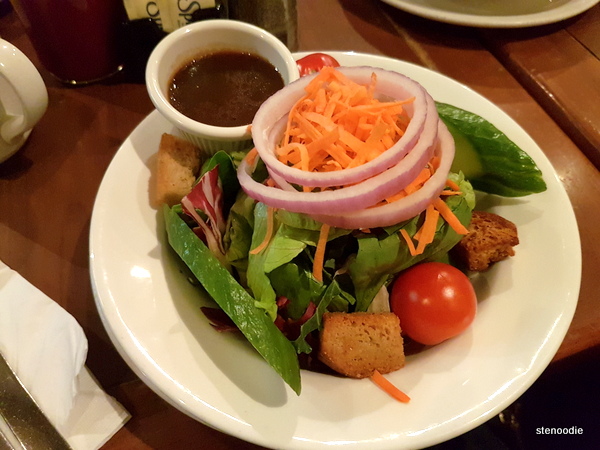 The Baby House Salad was fresh and a good portion of greens for us in conjunction with the smoked meat sandwich.

My relatives seemed to enjoy the smoked meat sandwiches they ordered too.  It was their first time eating Montreal smoked meat.  My aunt who ordered the pasta though thought the pasta was too al dente for her taste. 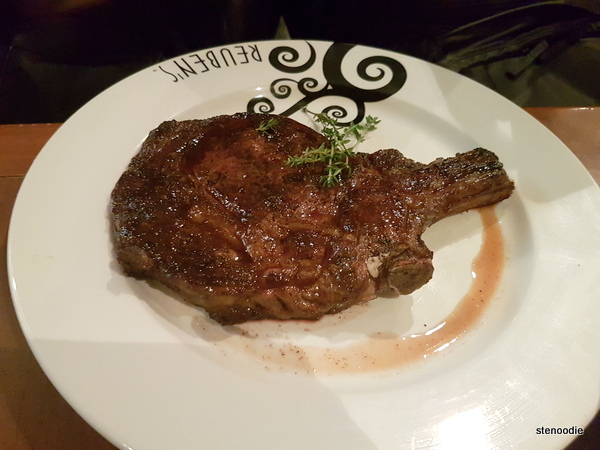 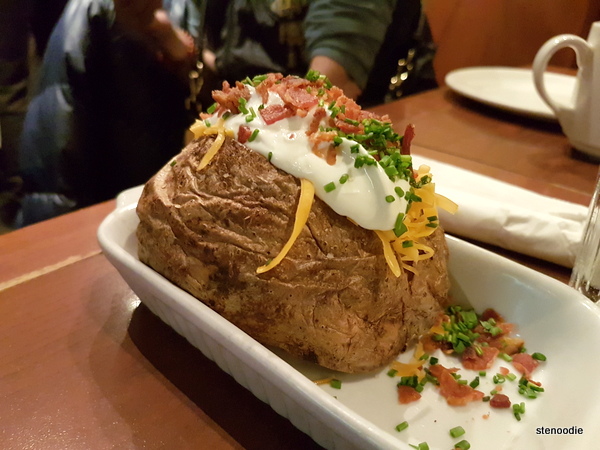 When it came to paying the bill, I’m not sure why the server had to again emphasize the fact that ‘”one person” had mentioned individual billing at first and it turned out not to be’… it wasn’t necessary to voice that again. … a-hole server.

All in all, I’m very glad we were able to try this restaurant.  I can finally compare it to Schwartz’s smoked meat!  However, although the food was good, the service here from the male server that night was downright rude and spoke unnecessary backhanded unprofessional comments directed at me.

It definitely made for a mixed first impression of Reuben’s Deli. 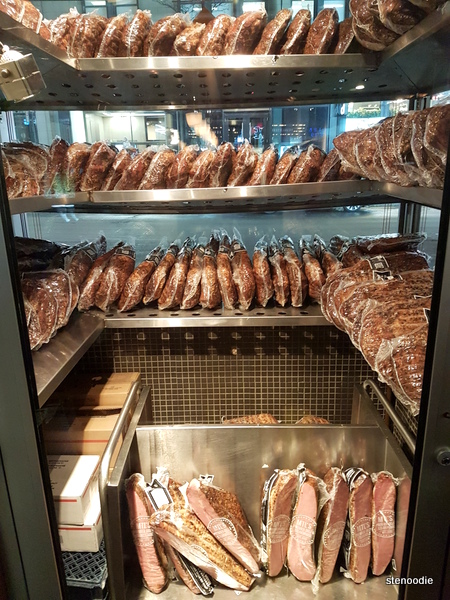 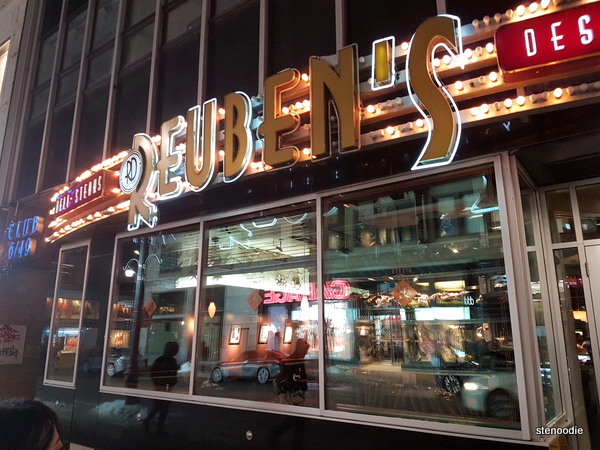