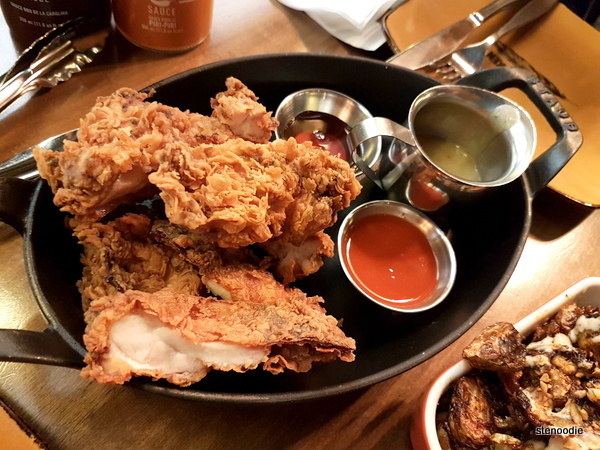 Union Chicken located at 100 The PATH, Union-VIA-GO in Toronto

August 4, 2018:  Now the title of this blog post might sound a little weird but that’s because the name of this restaurant is called “Union Chicken” and because there are currently two locations in Toronto, I had to specify that this location that I’m blogging about is at Union Station in downtown Toronto. 😀

For our dinner before attending the Taylor Swift concert, Betty and I came to Union Chicken for dinner.  I didn’t even know that this modern chic little eatery existed!  To get here from the subway station, walk towards the Via Rail section of the Path towards “York Concession”.  Keep walking towards that direction and you will see it.  Conversely, if you are coming from the streets down into the Path, walk down the stairs of the Union Station building towards York Concession to see it. 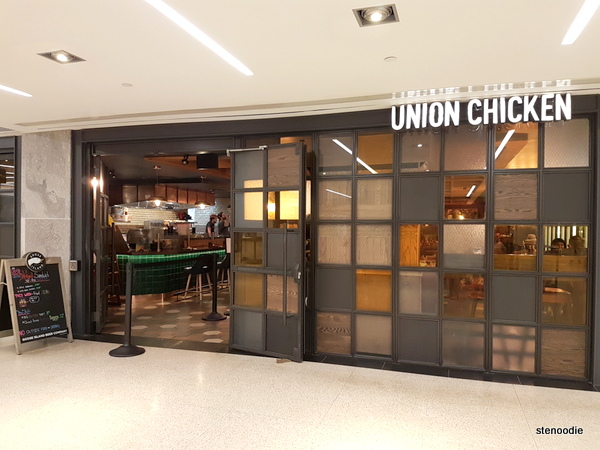 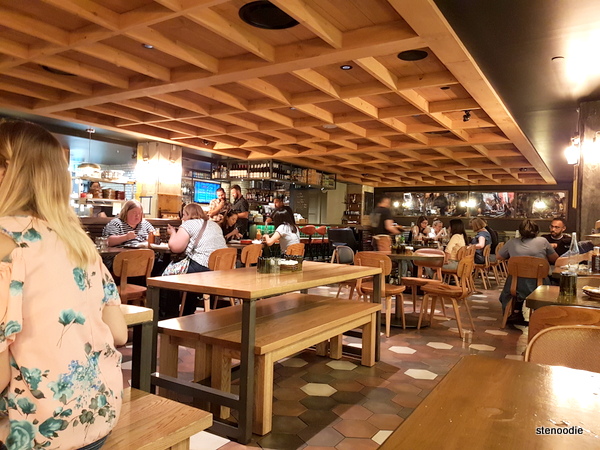 I love this casual and cozy setting

This must definitely be a lunch hot spot for those that work around Union Station.  This location of Union Chicken even has a dedicated take-out counter (thus confirming my assumptions for frequent fast orders and take-outs!). ;D

We dined in obviously in their dining room and I was so impressed with the aesthetics of the place!  I liked the wooden components of the wood and how cozy it felt.  I’m so glad that Betty suggested this place for dinner! 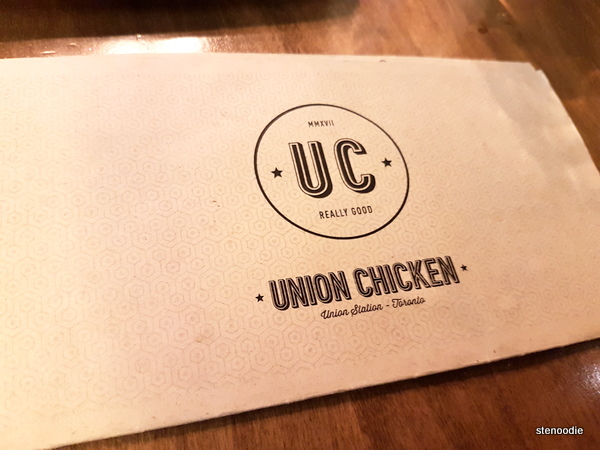 Menu was a folded sheet of paper 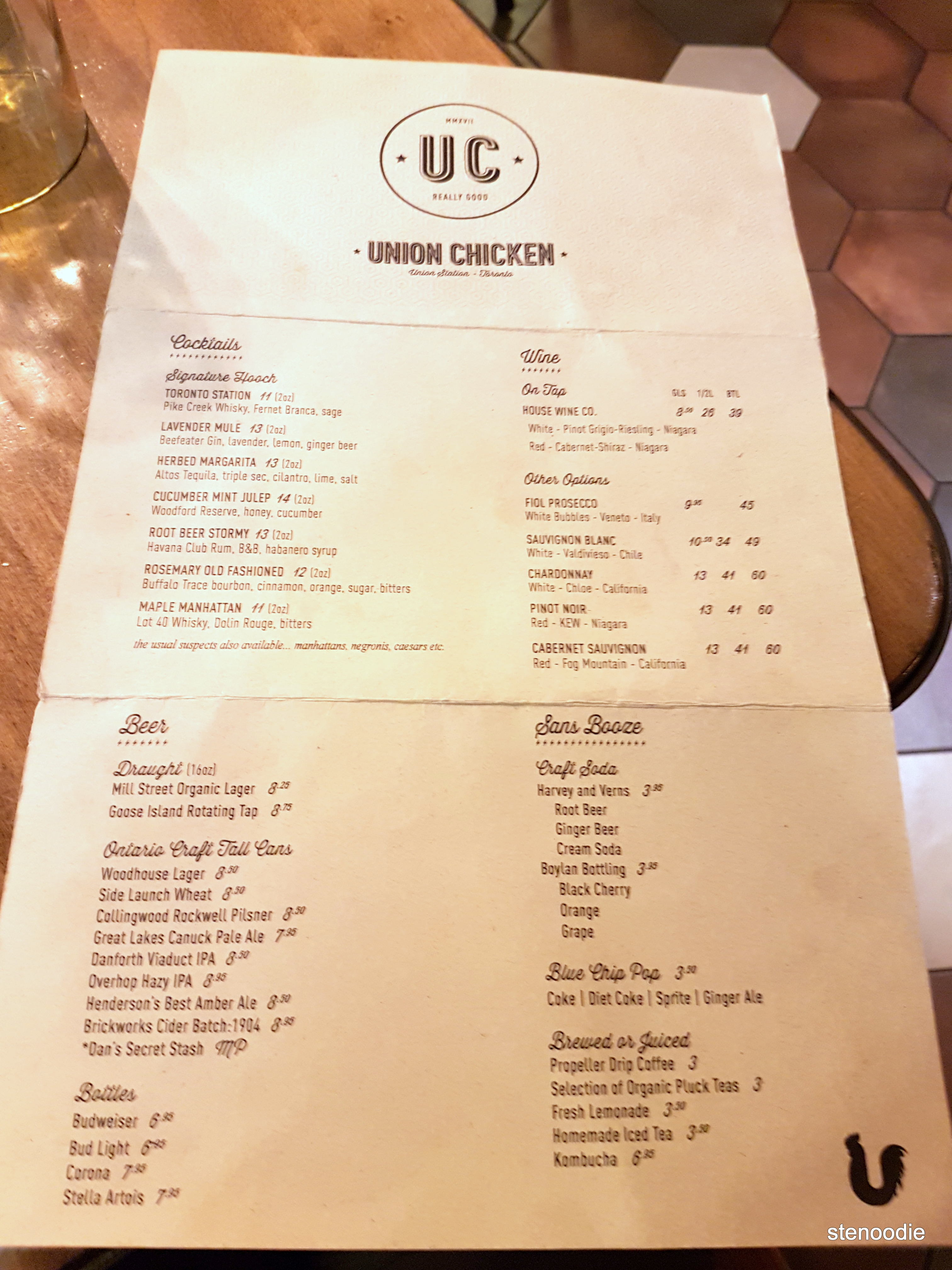 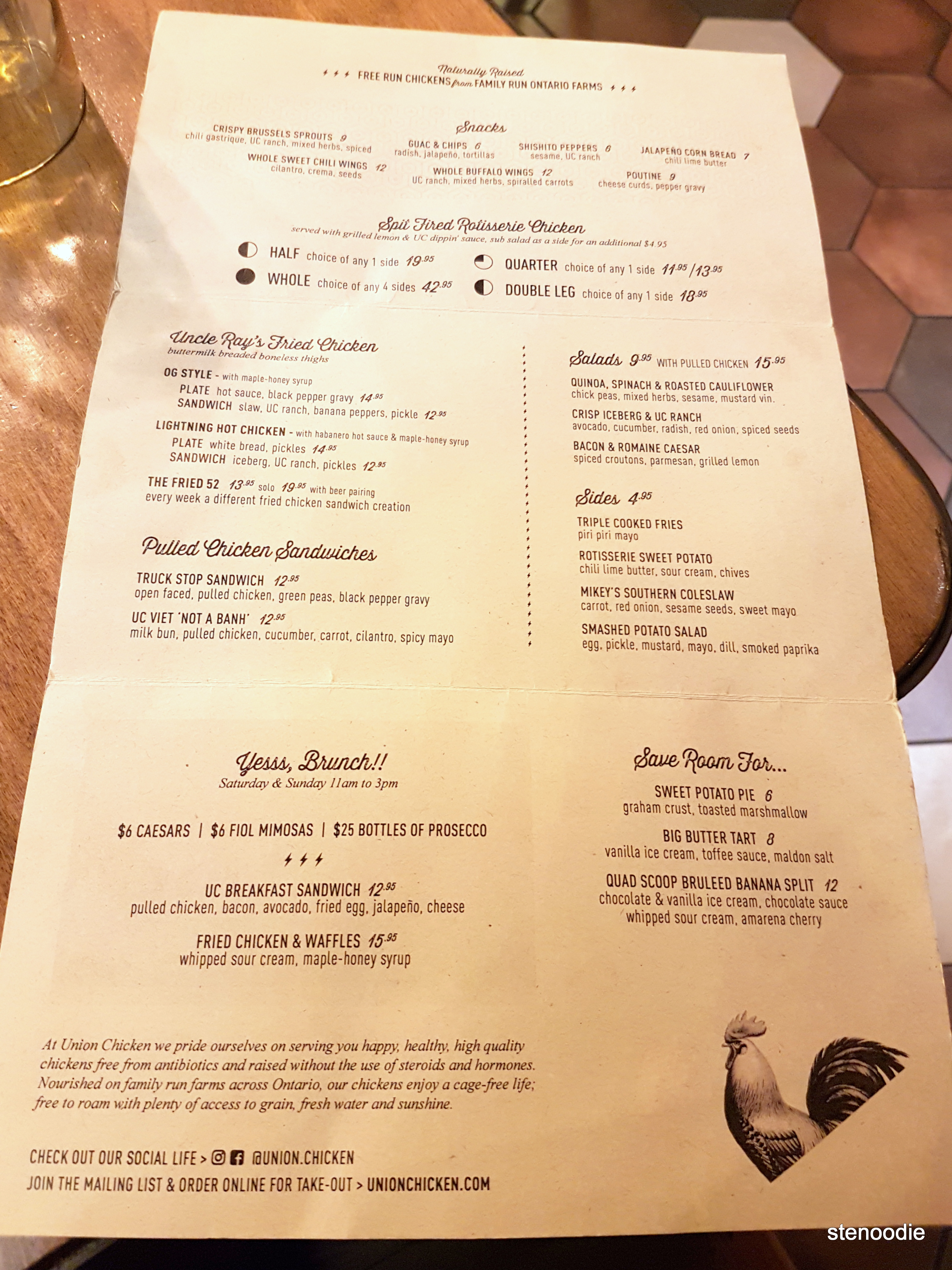 As the name suggests, this place is all about (spit-fired) rotisserie chicken and fried chicken for that matter.  Thus, we shared a helping of the Uncle Ray’s Fried Chicken in OG Style along with a side of Crispy Brussels Sprouts.  This amount of food was perfect for us to share to feel satisfied and not overly stuffed.

We were served two bottles of sauce after the cutlery were placed on our table.  One was a sweet “Carolina Dip” BBQ sauce while the other was a slightly spicy “Piri Piri” sauce. 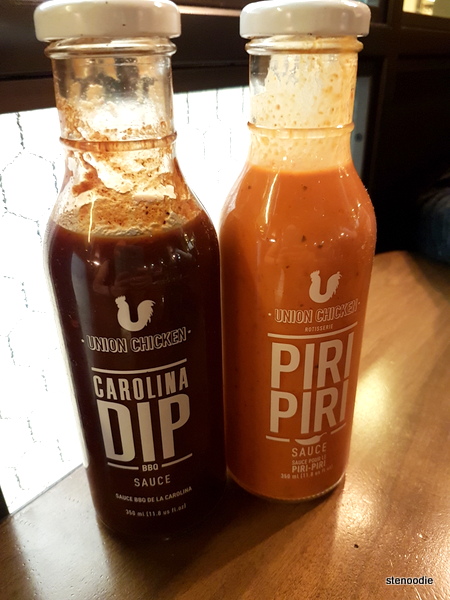 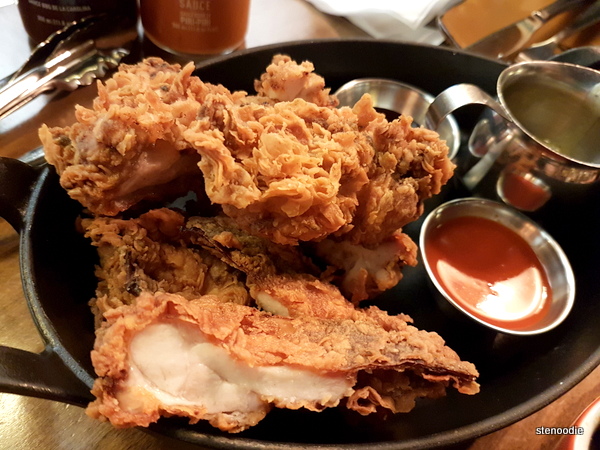 Uncle Ray’s Fried Chicken were buttermilk breaded boneless chicken thighs.  The “OG Style” included maple-honey syrup.  You could order this served on a plate version with hot sauce and black pepper gravy (which is what we ordered) or in a sandwich version with slaw, UC ranch, banana peppers, and pickle.

In addition to the OG Style, you could order the “Lightning Hot Chicken” or “The Fried”.

The platter of OG Style fried chicken arrived in a cast iron platter with hot sauce (on the side as we requested), black pepper gravy, and maple-honey syrup.

This was really well breaded fried chicken (so crispy!) and tender-tasting and moist boneless thigh meat.  As far as fried chicken goes, this was top notch!  I appreciate any fried chicken that has a crispy skin and moist meat underneath it. 😀  This was the perfect portion to share as I wouldn’t be able to finish all of the fried chicken on the platter on my own — there were six big pieces.  (Also, I’d get bored of getting just this fried chicken in one sitting despite the variety of available dipping sauces.) 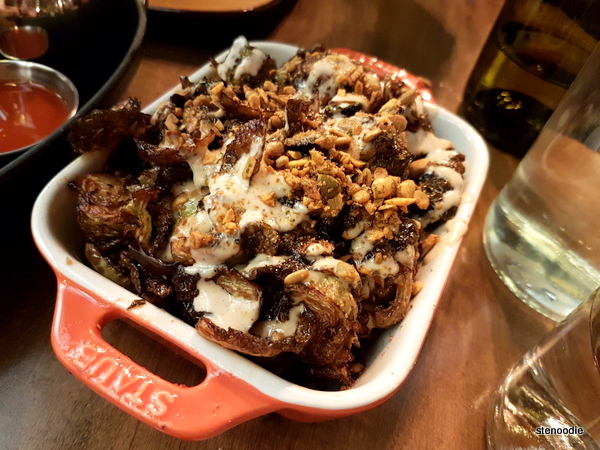 The Crispy Brussels Sprouts also arrived in a similar-looking ceramic two-handled platter and we were impressed with the portion.  For a side, the contents were filled to the top of the platter.

At first impression, this dish was devoid of the green leafy colour usually associated with brussels sprouts.  Instead, each brussels sprouts had been separated and marinated thoroughly (too much) with chili gastrique (caramelized sugar), UC ranch, mixed herbs, and spiced.

This combination of ingredients resulted in a very heavy-handed serving of seasoned brussels sprouts.  It felt like I was eating saucy vegetables drenched in seasoning instead of a healthier choice.  There was also too much UC ranch for my taste and thus overly salty. 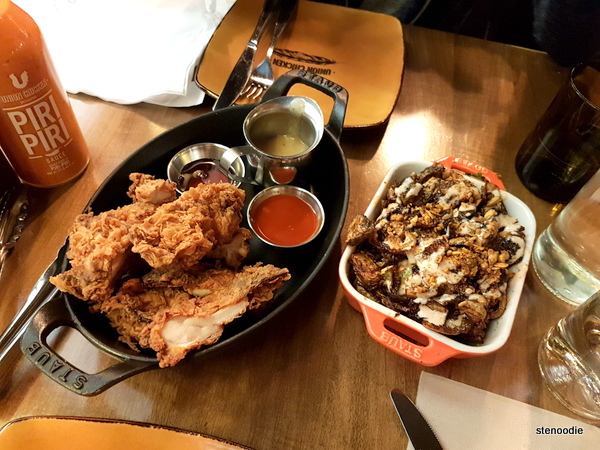 This location got really busy as the night progressed.  We felt like a lot of the other patrons were also dining there and attending the concert afterwards too(because of its close proximity to the concert arena).  I noticed that our server didn’t come back to check up on our table after all the food arrived.  She was also nowhere to be found when we tried to get the bill.

I loved the fried chicken here though and would recommend that for sharing! 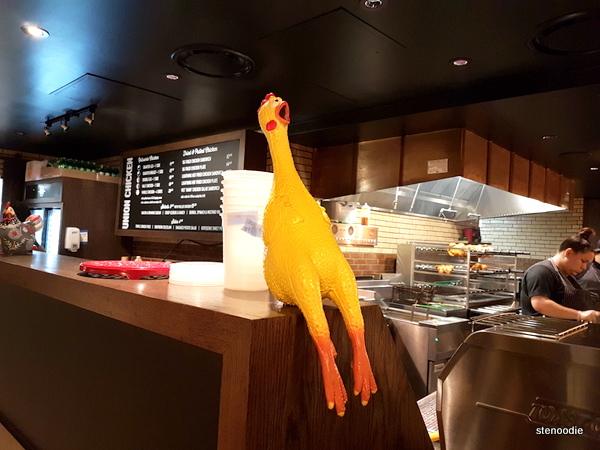 Beyond the rubber chicken, you can see the take-out counter and menu 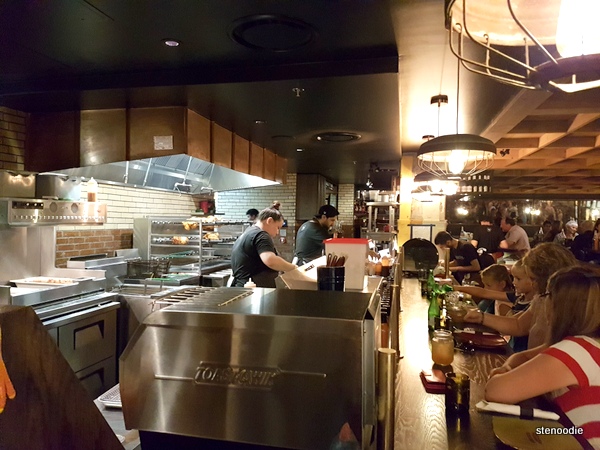 You can see the spit-fired rotisserie chickens in the back