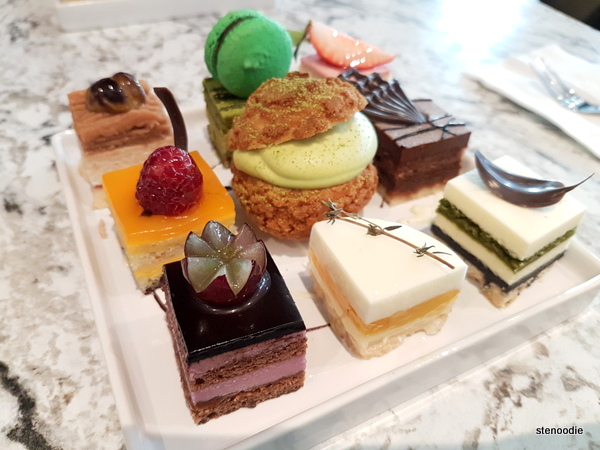 August 14, 2018:  I had dined at Tendou before for their matcha-focused desserts and ice cream.  Since then, they have closed and reinvented themselves as Patisserie Kirin ft. Tendou Matcha & Dessert to focus more on other pastry desserts and drinks while still continuing to offer their popular matcha ice cream and other previously signature desserts (such a smart move on their part).

This was a Yelp Elite Event that I was lucky enough to attend.  On this night, we were able to sample some of their signature desserts through a mini dessert tasting menu!  This was really fun. ^_^  A lot of their cakes are Opera-style (cakes made with layering). 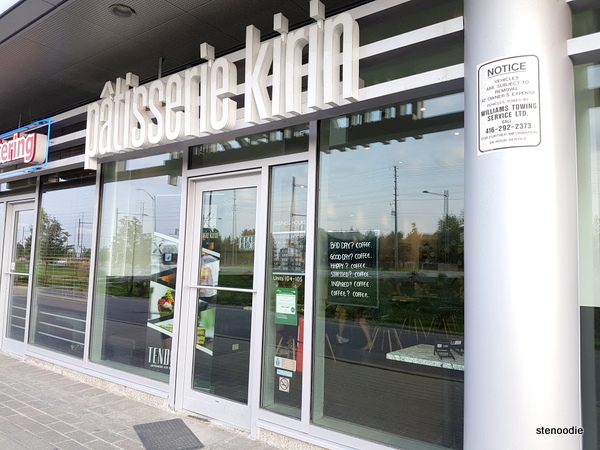 When I arrived at the parking lot at the Highway 7 and Warden-ish plaza and found a spot (it’s hit and miss to get a parking spot here sometimes because there aren’t a lot of spaces), I was surprised to find that Patisserie Kirin actually didn’t replace the former unit of where Tendou was.  I walked around the plaza a few times and thought I was at the wrong place entirely until I decided to walk to the other side of the plaza facing Highway 7 itself.  That’s where I found the newly located cafe!  (It’s an individual unit on the side of Gal’s Sushi if that helps and it’s not connected with the plaza like how they used to be.)

Their new space was bigger and had a large display counter space to showcase desserts.  The grey-coloured interior was so modern and had those trendy light enclosures that so many other modern cafes and restaurants have nowadays. 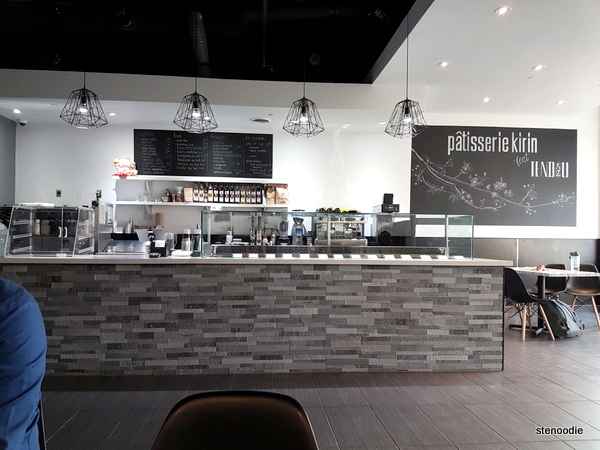 The grey scheme is so beautiful

We were actually dining in on a Tuesday during their day off, so we were lucky to have the entire space to ourselves for the private tasting.

We were each able to order a drink off of their menu!  I asked the staff for a non-caffeine drink recommendation and was suggested to try the Houjicha au Lait.  I was a little doubtful at first because I thought that Houjicha was still of the green tea family and thus would have some caffeine, but it ended up to be a good choice and my caffeine-sensitive body didn’t find it difficult to fall asleep that night.

The Houjicha au Lait was a milky tea-like drink that was very comforting.  It smelled really good and the milk in it made it such a smooth and cozy beverage to sip on while enjoying the dessert (I’m so glad the drink wasn’t too sweet and balanced the sugary desserts out). 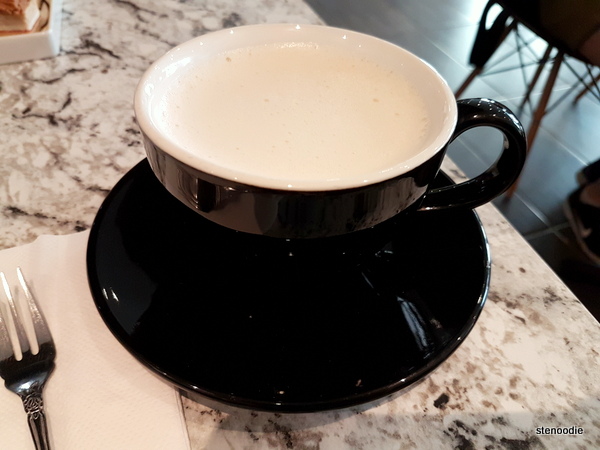 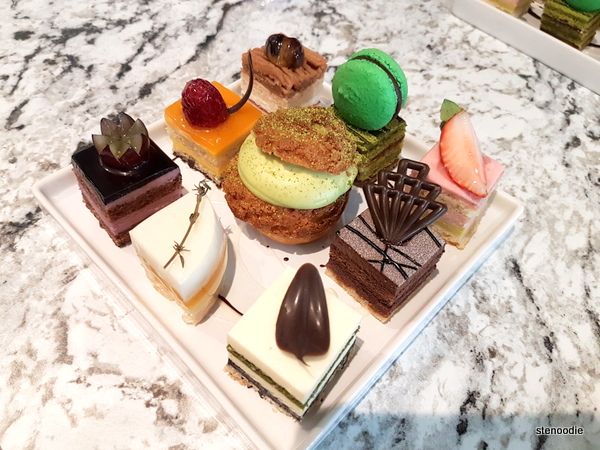 I was so impressed that we were each befitted with our own dessert platter to sample!  Apparently, this Dessert Omakase is also available for a limited time for $26.   I loved that each cake was shown off in a bite-sized form so that we could try everything without being full (although it was hard to believe, when we got to the last three pieces of desserts on our platter, we each felt quite full!  I noticed some people actually packed their leftovers home XD.)

We were able to hear a summary from the staff about the desserts we tried.  They included: Matcha Opera, Marron, Kirifuda, Taiyou, Natsumi, Zangetsu, Chocolate Praline, Suzumi, Choux a la Creme Matcha, and Tarte Tiramisu.

Each dessert was so detailed and delicately crafted.  I really enjoyed the tasting process and the flavours of each distinct cake was obvious.  My highlights were the Chocolate Praline (a really good rich chocolate flavour), Marron (chestnut mousse even though I don’t even like chestnut that much, but this was so well done), Taiyou (mango mousse which was so fresh and sweet), and the Choux a la Creme Matcha (this matcha cream was amazing and so smooth!!  It gushed out when I bit into it and this was the last-thing-to-save-for-last-kind-of-dessert. :D)  I think the best part about these pastries at Patisseri Kirin was how the desserts were on the moderate level of sweetness.  Everything was simple yet so detailed and distinct.

At the end of the night when we voted on which dessert was our top-pick, the overwhelming majority was surprisingly the Zangestu which was a black and white sesame with matcha dacquoise.  This had a really crispy biscuit base that was certainly unique.

Mmm, this was a great night of not only trying out the different desserts but having really great conversation with the ones at my table.  It’s not often that you find yourself surrounded with similar-minded or easy-to-talk-to-peers at these food events.  I really appreciated my friendly tablemates that night and I learned a lot too from their perspectives of the adult world.  It was really so nice. 😀 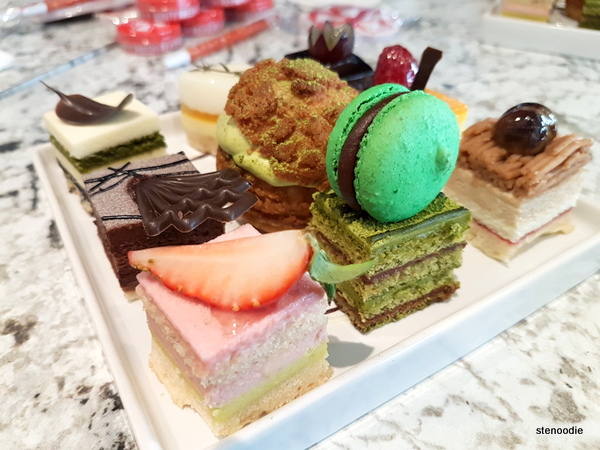 I loved how everything was bite-sized! 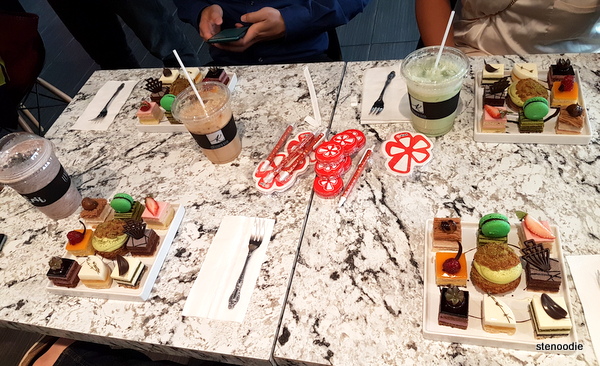 Thank you, Yelp GTA, for hosting and organizing this event! 😀 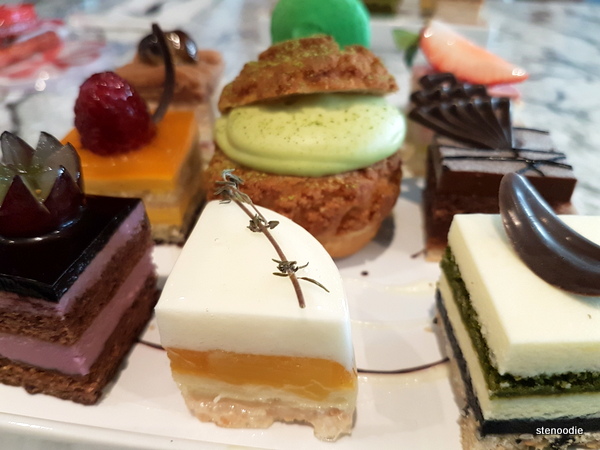 I loved the attention to detail on everything

FTC Disclaimer:  Although Yelp GTA and Patisserie Kirin invited me to a complimentary tasting, the opinions expressed here represent my own and not those of the companies.