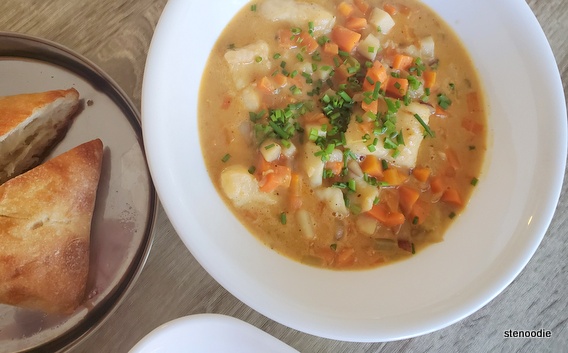 This was my first time making fish chowder at home.  I was quite intrigued to try this New England Fish Chowder with Ciabatta Toasties when I saw it as one of the choices for the Chefs Plate meal selection for the week of May 11.  This recipe called for 35 minutes of prep and other than chopping up vegetables, the rest of the recipe was quite easy — throw everything into the pot basically.

Chefs Plate is a weekly subscription meal kit that delivers all of the necessary ingredients, all pre-portioned and measured, for you to make a select meal for two or four people.  This meal kit was for two people. 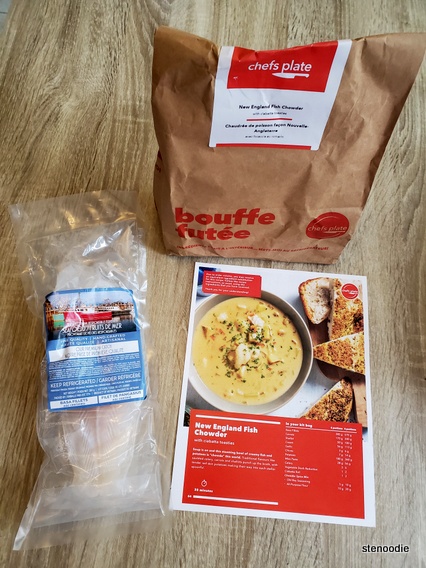 The items you receive to make this dish 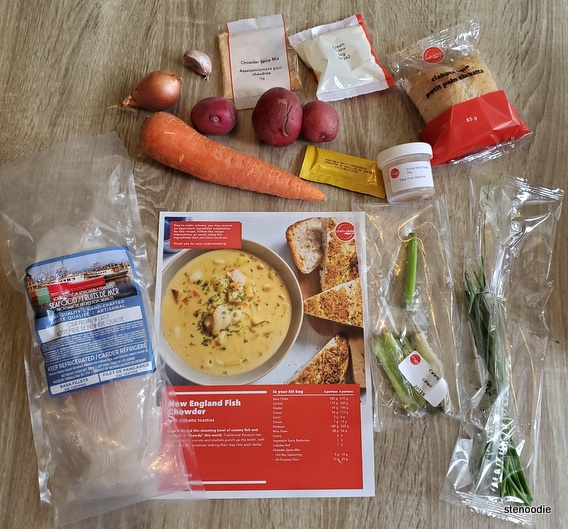 All the ingredients for the fish chowder

To get started, the recipe card called to preheat the oven to 450° F (to toast the ciabatta at the end of the prep), but when I looked at how small the ciabatta bun was, there was no way I was going to turn on my oven for just that.  I decided to use my toaster oven (which was perfectly fine).

First off, prepare the ingredients by peeling and cutting the carrots, celery, potatoes, shallots, and slicing the chives and mincing the garlic.  The vegetables should be cut into 1/4-inch pieces. 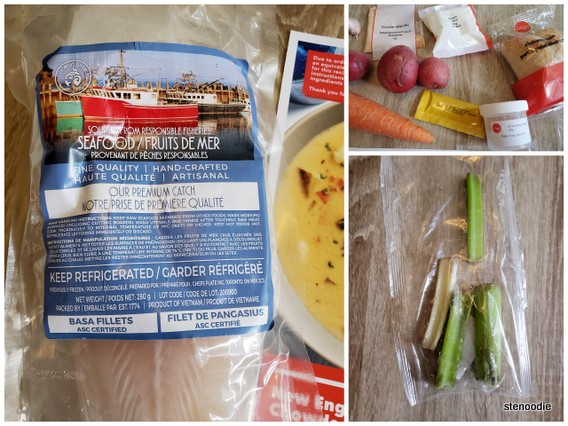 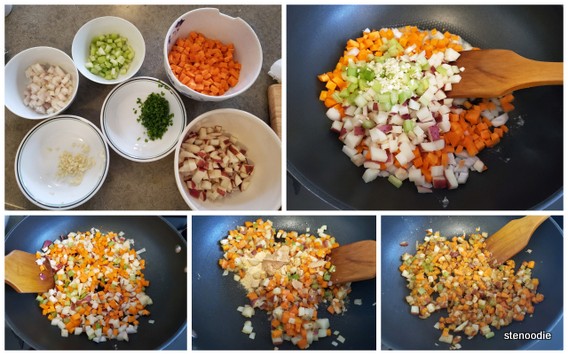 Cooking the vegetables for the chowder

Start the chowder by adding 2 tablespoons of butter in a large pot over a medium-high heat.  Once the butter has melted, add all of the vegetables except for the chives.  Cook and stir occasionally for 5 to 6 minutes until the carrots are slightly tender.  Season the pot with salt and pepper.  Next, add the Chowder Spice Mix (consisting of Old Bay Seasoning and all-purpose flour) as well as the miso paste for two minutes and this time to stir often.  (The miso paste was actually in a plastic container.  All of the other sauces were delivered in small plastic packets.  I was even under the impression that Chefs Plate had discontinued using plastic containers, but I guess it just depends on what ingredient it is.)

Next, add two cups of water, cream, and the vegetable stock reduction to the pot.  The vegetable stock reduction was a very condensed dark liquid — be careful when you are cutting the packet open in case of spillage.  Mix everything together and simmer over medium-high heat.  Once it’s simmering, reduce to medium-low heat and cover.  Keep stirring occasionally for 10 to 12 minutes until the potatoes are almost tender and the chowder has thickened slightly. 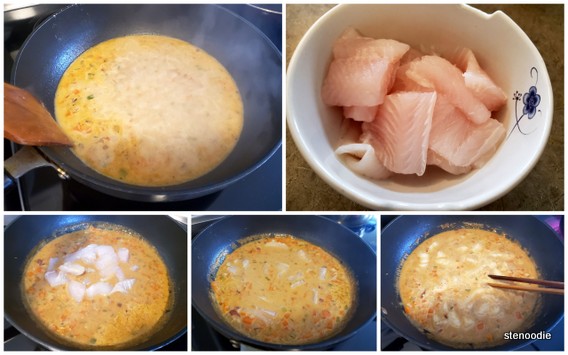 Adding basa fillets to the chowder

Lastly, with the basa fillets first pat dry with paper towels, cut them up into large chunks and then add them to the chowder.  Continue cooking with the pot uncovered for 4 to 5 minutes until the fish is cooked thoroughly.

During this last step of adding the fillets to the chowder, I had already preheat my toaster oven to 400° F.  I cut the ciabatta bun into two pieces diagonally and drizzled 2 teaspoon of oil onto it.  I put it into the oven for 3 to 5 minutes, perfect for the fish to finish cooking in the pot.

Finally, scoop out the fish chowder from the pot, sprinkle it with chives, take the toasted ciabatta buns out of the oven, and it’s chow time! ;D 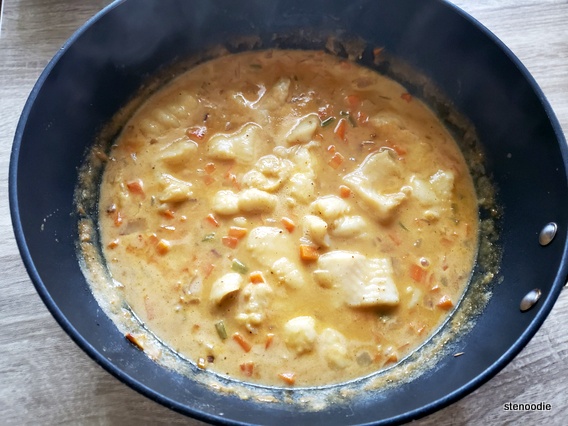 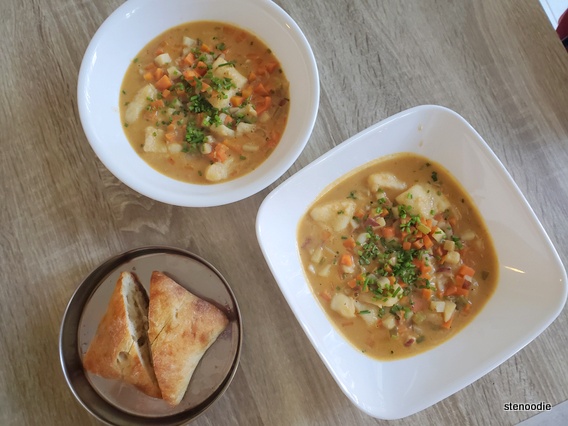 I was surprised with how strongly flavoured the chowder ended up being.  It was very rich, strongly punctuated with a bit of spice and salt, but otherwise a good texture.  It was akin to a curry or gumbo even.  It would have went well with rice too. 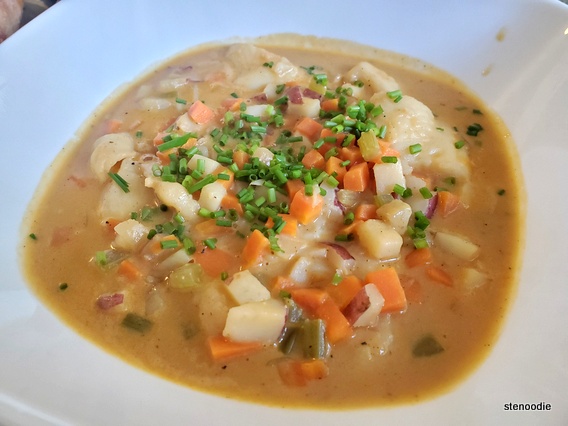 One portion of the New England Fish Chowder

The basa fillets were very soft and smooth.  They weren’t marinated and thus paired well with the rich tasting soup. 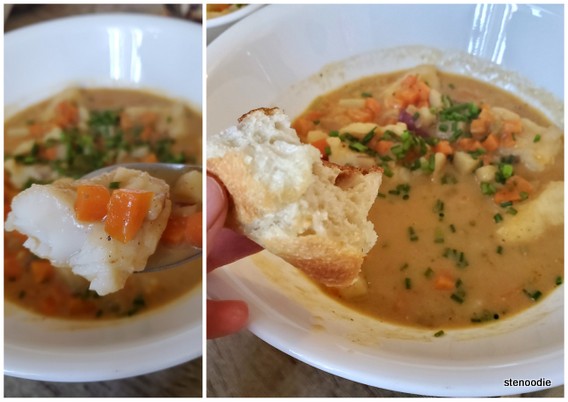 The ciabatta bun was actually so delicious with just oil drizzled on top.  It was perfectly crunchy as well and went really well with the soup.  We don’t buy ciabatta buns often to eat at home but now maybe we will!

Now that I’ve made fish chowder at home for the first time, it’s actually incredibly easy.  All you need are a selection of vegetables, chop them up, and throw in the basa at the end.  I won’t have the same miso paste or seasonings on hand to re-create the same flavour, but I’m sure it’s easily replicable with other common pantry items.

If you want to try Chefs Plate for yourself, I have four free meals to give away.  Just click this link if you are a new user, select your meals, and your cart will automatically show the free meals.  There are new recipes every week for vegetarians and meat lovers alike.  Happy cooking!