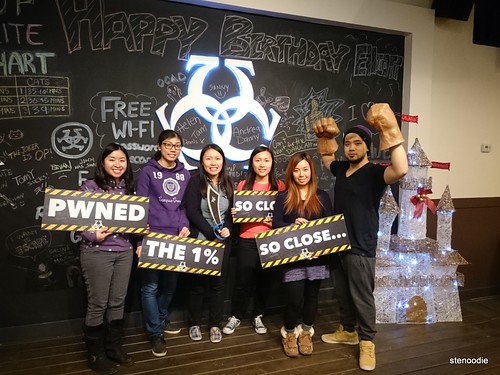 Escape games are so addicting and fun!  After Rosa and Anna told us about this new escape place that was opening up in Markham and also hearing Mel talk about Omescape (located in Markham at Woodbine and Esna Park), I knew I wanted to try it out for sure.  Mel is an expert at escape games, playing one almost every weekend with her boyfriend, and highly recommended this one after hearing that I loved the high tech elements from Xscaper Arts.  I was so looking forward to this that it actually became a bit of a downfall for my first visit.

Omescape is located in the back side of the group of buildings where The Fish House used to be and now occupied by Gold Mark Chinese Cuisine.  They recently opened up in December so they’re only two months old!  However, you know that they’re up for some serious competition in terms of the escape game trend because they also are a board game cafe and serve bubble tea and drinks from Presotea as well. 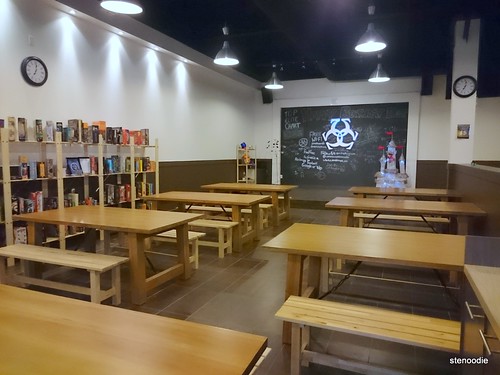 Looks like a classroom where you learn how to play board games complete with the chalkboard at the front! Lol XD

When you walk in, you can see the huge space that they own and a wide expanse of tables and chairs where you can play board games.  At Omescape, you can either pay $29ish to pay a single escape room or pay a little more in order to also use their board game area and get a drink as well.  They have $5 board game Tuesdays!

Nice design of posters for each room!

The six of us chose to play the “Kingdom of Cats” room for our first game at Omescape.  They have lockers for you to place your belongings and also posters and a looping video that tells you a little back story about each room.  It’s nicely designed and perhaps because they are actually a franchise! 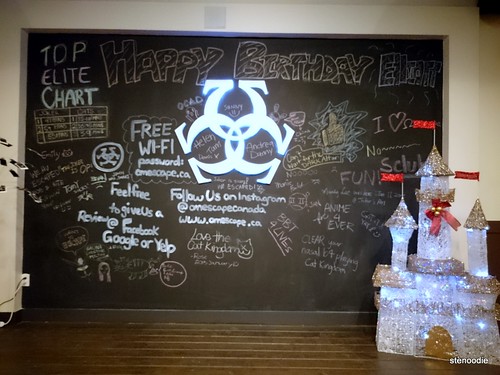 They have a “stage” for you to take your failure/success photos with and can write a message on the chalkboard. Only if you complete a room do you get a Polaroid shot of you and your team to be placed on that “photo” tree. Also, you get fun props to take pictures with! 🙂

Our escape room was booked for 7:15 p.m. on a Saturday night.  We all arrived at 7 p.m. promptly in order to get settled in and sign our waivers.  However, we actually weren’t able to start our game until close to 7:35 p.m. because apparently the group that was ahead of us playing “Kingdom of Cats” was late and pushed our slot back as well.  Hmm, this didn’t leave a very good first impression because we were kept waiting and since we arrived early, we really didn’t play our game until half an hour later.  The staff at Omescape should perhaps arrange their room bookings a little better if this is the case. 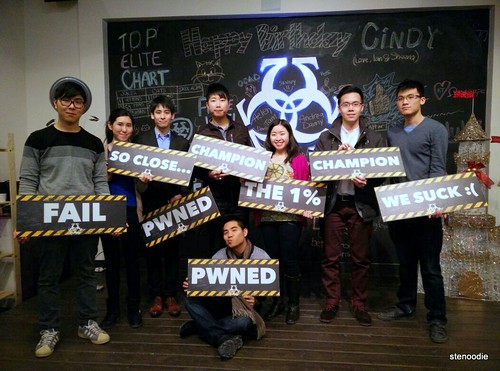 The second game I played at Omescape which redeemed what I thought about the escape place. So fun and mind-blowingly difficult!

As I alluded to earlier in this post, because I had such high expectations for this escape place, I was actually a little disappointed with the clues and puzzles in “Kingdom of Cats”.  I just expected too much!  However, looking back now, even though we didn’t solve the room, the puzzles in it were actually still pretty good and used a range of different elements.

The reason I also say that I have a redeeming opinion of Omescape now is because I actually went to play another room with friends the very next day!  We played the “Joker’s Asylum” room, which is currently rated as the highest difficulty level room.  We had eight people in our group and were split up so that three went into the Control Room and the rest went into the field.  It was actually really fun and I loved all the elements that were in this escape room.  I’m not going to spoil it for you but the thoughts that went into this room, especially that last puzzle, is definitely worth applauding over.  I now appreciate Omescape much more than that first visit and actually can’t wait to come back for another game.  I still hold the “Inception” room from Xscaper Arts highly in terms of fun and uniqueness, but “Joker’s Asylum” was no walk in the park.  I definitely recommend you check Omescape out! 🙂