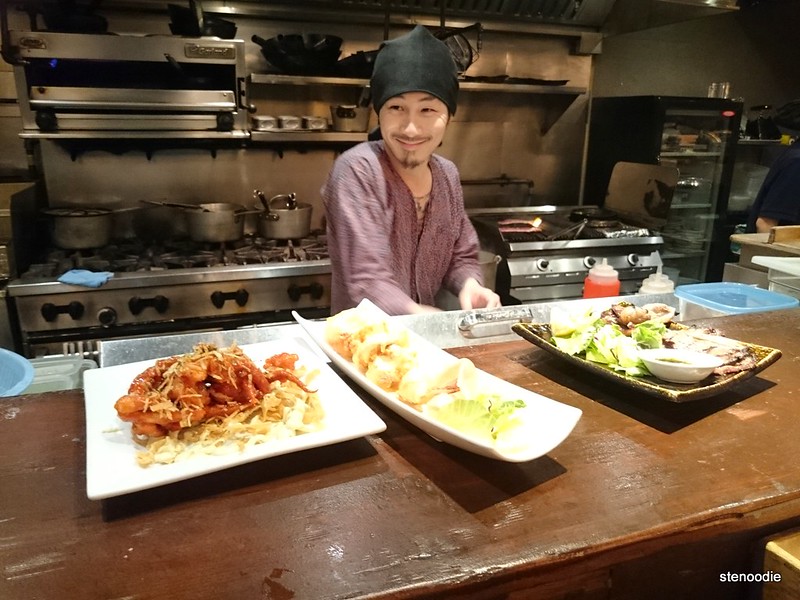 Thank you Kinka Izakaya Original (Church Street location) for inviting me and a friend to your tasting dinner! 🙂  Kinka Izakaya used to be known as Guu Izakaya but since they have separated ways with the original franchise of the marketing group, they have now rebranded themselves as Kinka Izakaya.  While I was there, it was important for the staff to stress that they have not changed any part of the well-known izakaya experience that people have come to know and love previously from Guu.  Their food, staff, pleasantries, and tradition all remain the same; only the name is different. 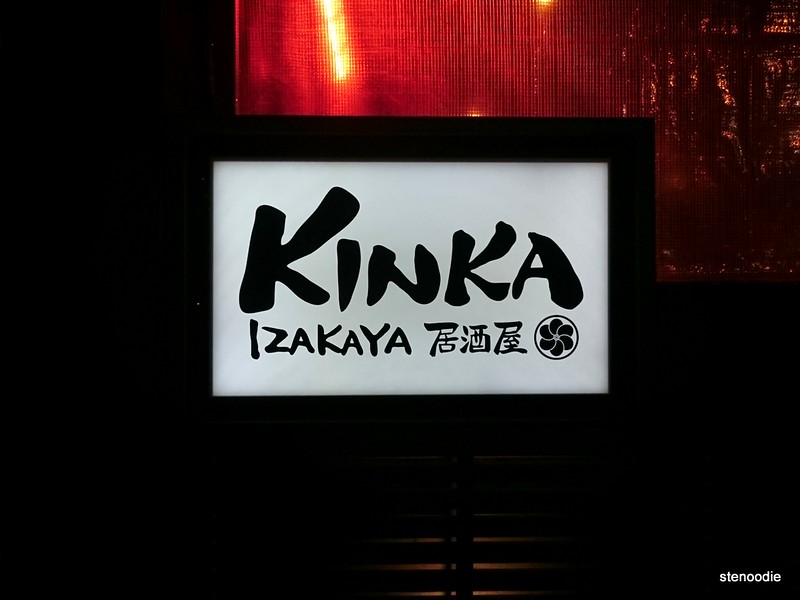 I e-mailed back Jin to let them know of my RSVP and I was also asked about any dietary restrictions that my guest and I had and what kind of drink we would like.  Everything was very well organized and to my knowledge, they actually are hosting three of these special dinners to food bloggers in the Toronto region for them to taste and try their popular menu items.  I was very excited as usual!  I have been to Guu twice in the past and admired their energetic atmosphere and  good-tasting original izakaya tapas.  I remember it was in the summer of 2010 that I first stepped into Guu with my friend Patricia for dinner before we headed to watch Legally Blonde the Musical.  That was really fun!  The last previous time that I dined here was within the past here and the experience has been blogged about here. 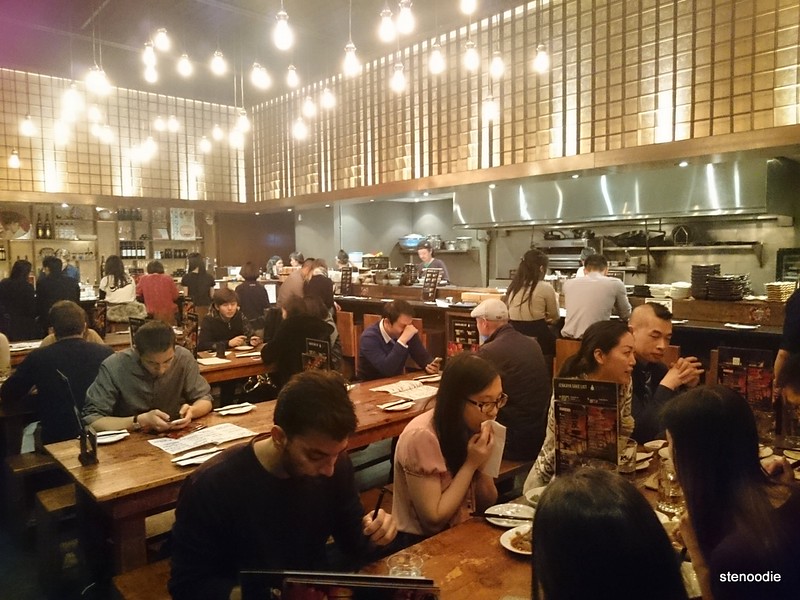 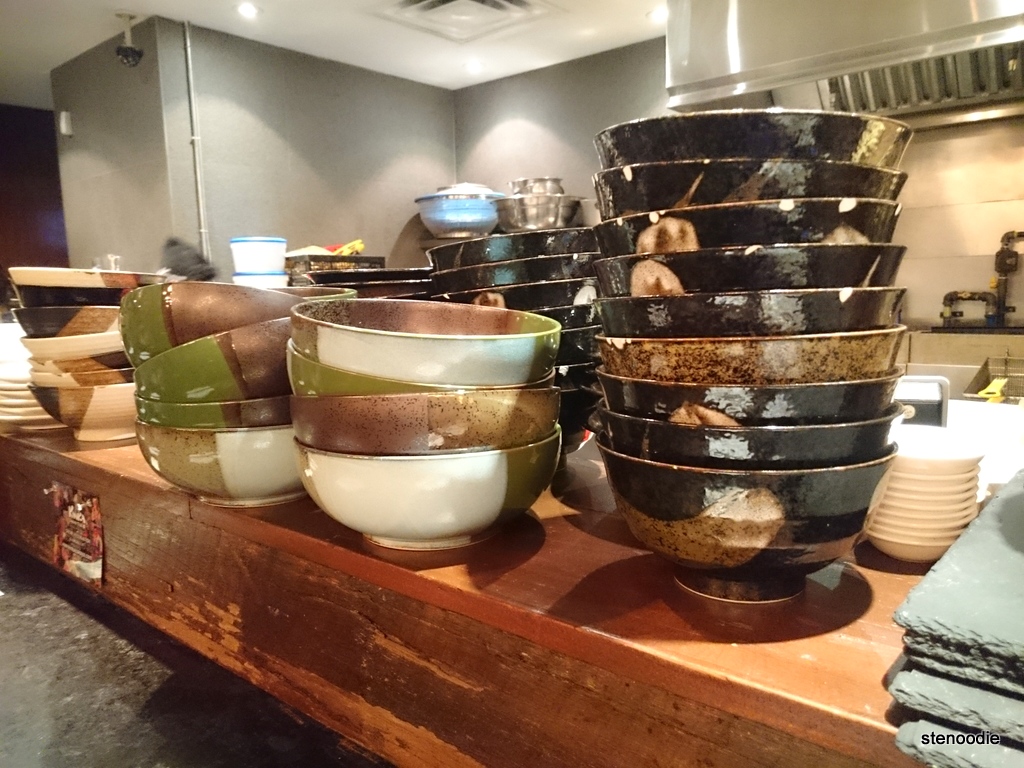 Beautiful bowls that you can see when sitting at the bar

For this visit, I wasn’t sure what to expect but I knew that it would be a good one.  When we stepped in a little after 6:30 p.m., the place was already bustling.  Upon signing in and being directed to our seats at the bar, there were loud cheers of welcoming greetings and huge smiles from the staff behind the bar.  It was rather infectious and extremely welcoming and warm.  It was amazing! 🙂

It was Sarah’s first time at Kinka and she had never been to Guu previously either.  She loved the energy and mood of the place! 🙂 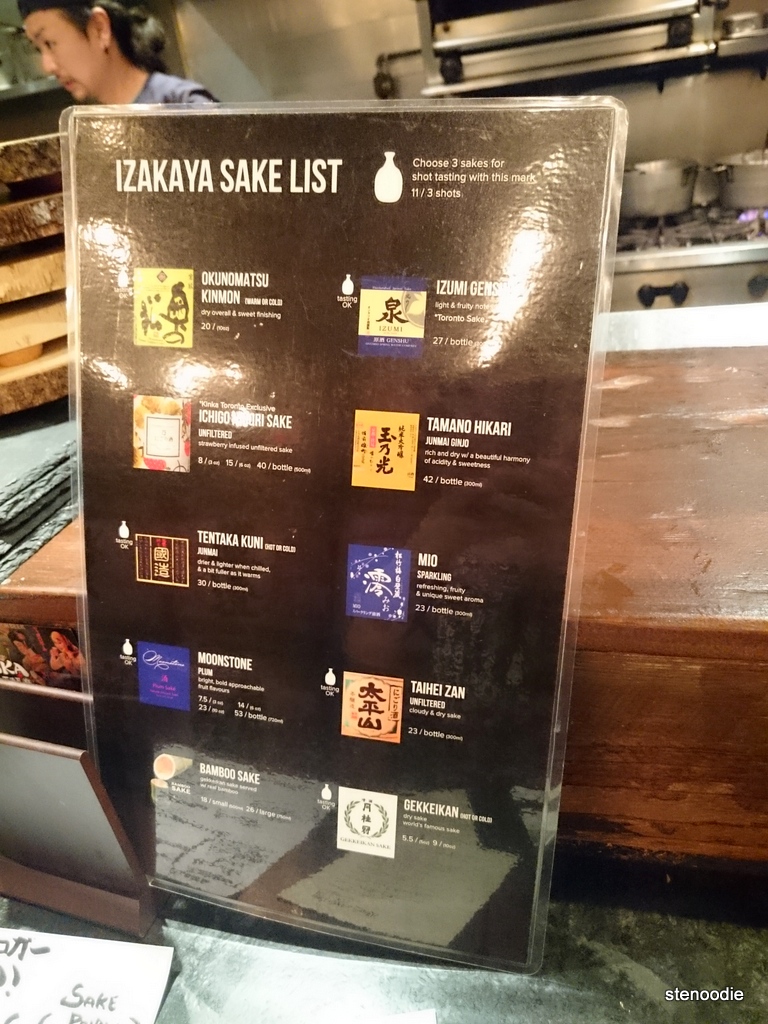 Izakaya Sake List. For our tasting, we were able to choose from two of these

There were two sakes to choose from.  Sarah chose the dry sake so I automatically chose the sparkling sake even though our server said it’s debatable whether that one is actually a sake haha — I chose it so that I would be able to try both of their sakes!  True experience collector here. 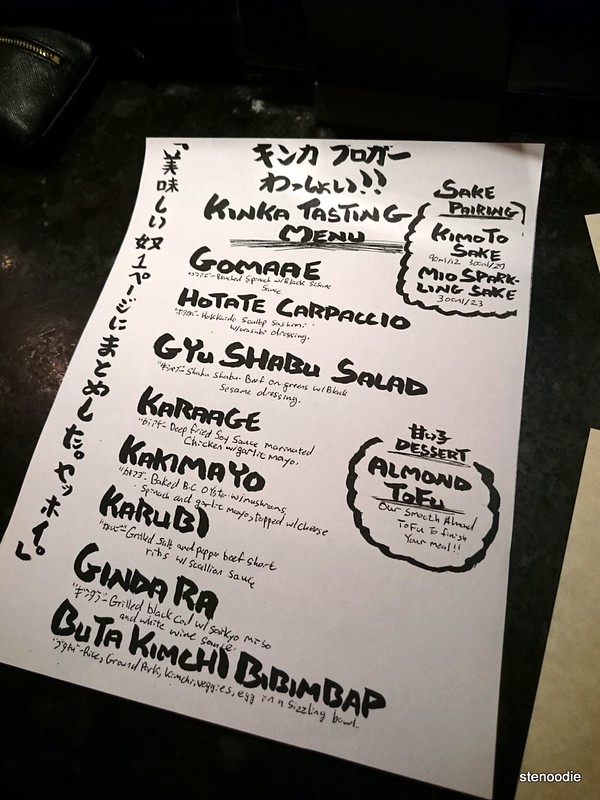 On the table, there was a list of the food items that we would be having for the Kinka Tasting Menu.  I actually thought that I was going to be sitting in a table with other fellow food bloggers and dining together.  Usually, that’s how my past blogger experiences have been.  On the flip side though, by sitting at the bar, we got an amazing view of the full kitchen and all the staff making the food and cheering vigoriously whenever someone entered or left the restaurant.  It was quite the experience!  (It reminded me of my recent experience at Yasu where I got to watch the sushi chef in action :).)

We were going to be served eight courses of food plus one dessert.  How exciting! 😀  We also chose a number to be entered into the surprise giveaway at the end of the night.  Cool! 😀 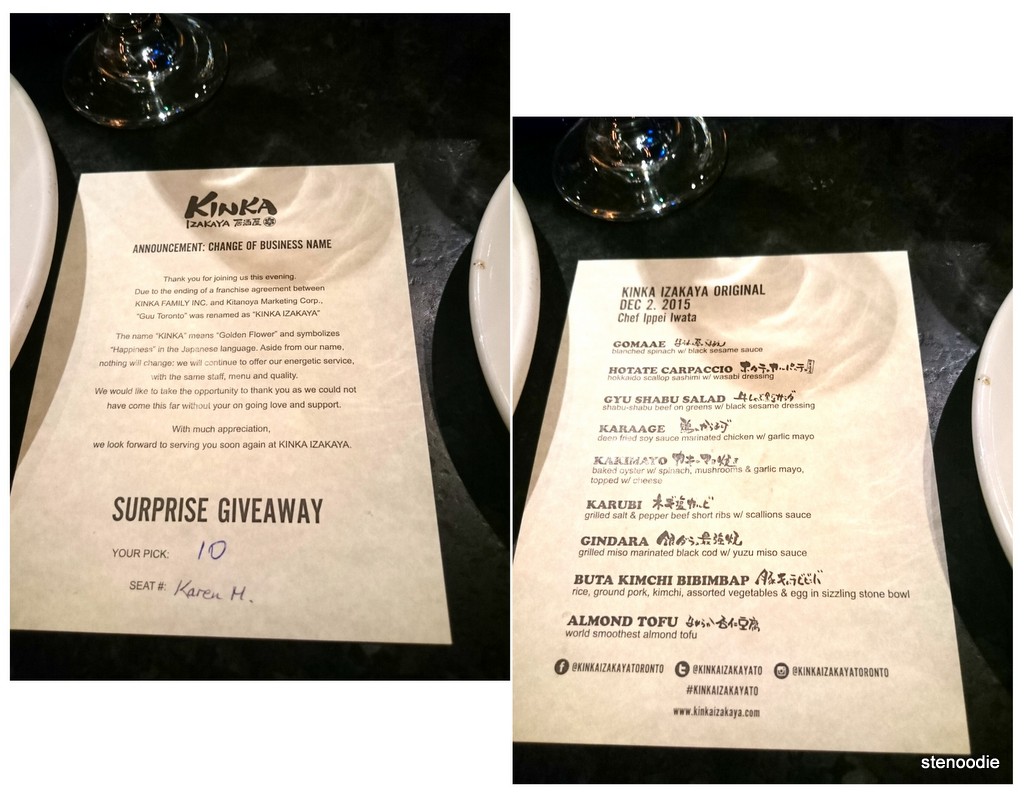 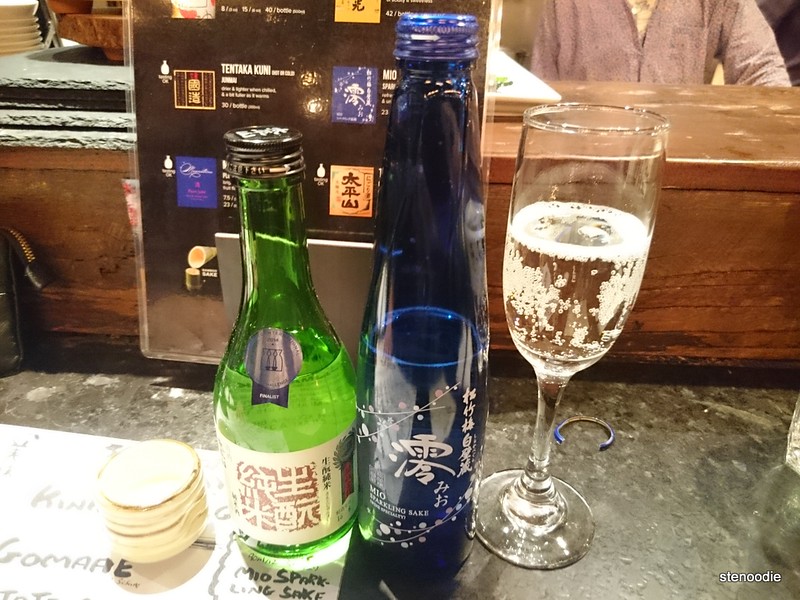 Our two sakes for the night 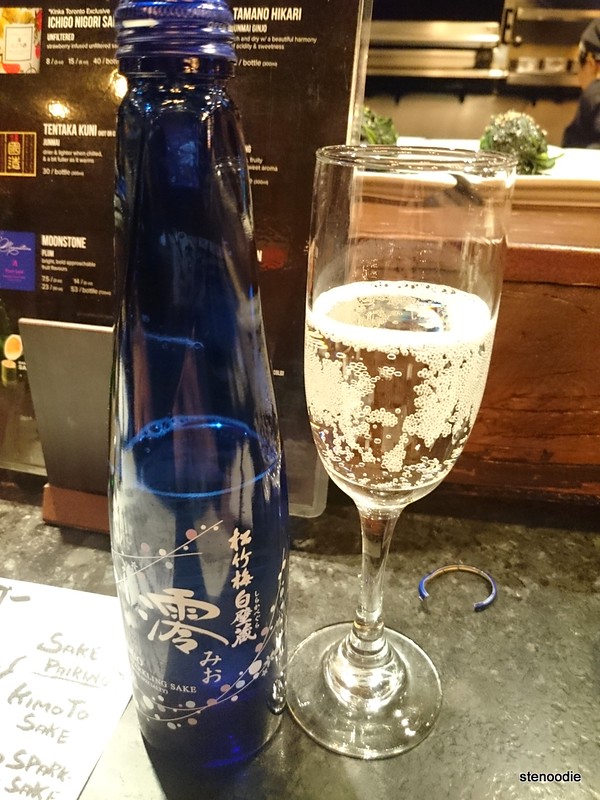 Our server brought our sakes to us shortly.  The Sparkling Mio that I chose had a  sweet and light taste that I really, really enjoyed!  I realized why the server commented that this one is hard to categorize as a true sake because it tasted more like a sweet alcoholic beverage than a true sake.  On the drinks menu, it was described as a “refreshing, fruity & unique sweet aroma”.  I really liked it though and it was easy to keep sipping away on it. 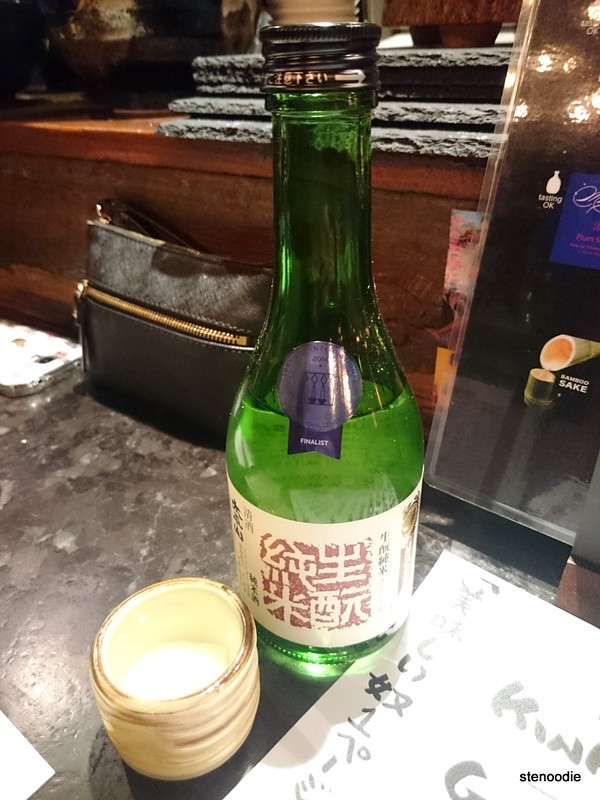 Sarah chose the Unfiltered Taihei Zan Sake.  This one definitely tasted like a sake with its dry taste.  It also contained 15% proof which was a lot stronger than the Mio which only had 5% proof.  The menu described it as “cloudy & dry”.  This one was more heavy and you could feel the alcohol after a few sips.

Since we were sitting right at the bar and in front of where all the food was ready to be picked up by the servers, we saw exactly everyone that was coming out from the kitchen.  I took a lot of pictures from this angle because I could, haha.  We also knew what dishes were upcoming.  So many dishes looked so good! 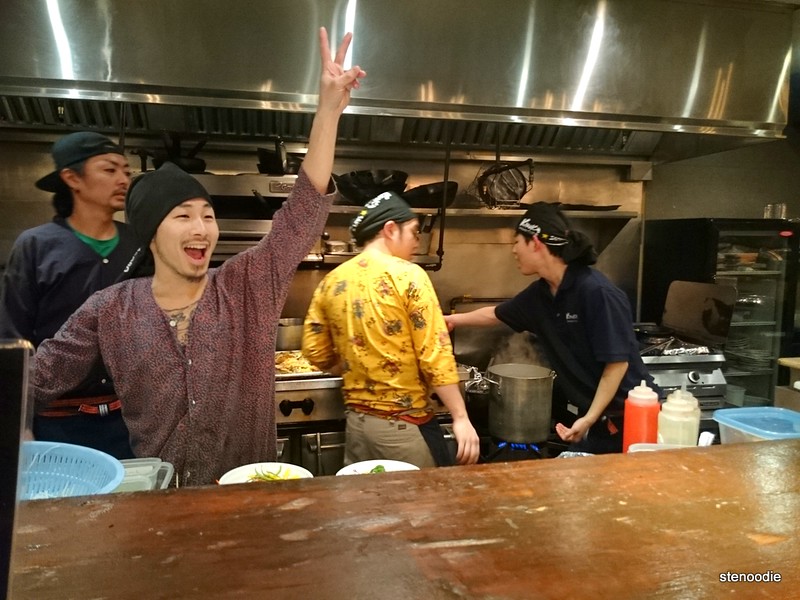 Their bright smiles and loud cheers will brighten anyone’s mood or day! 🙂 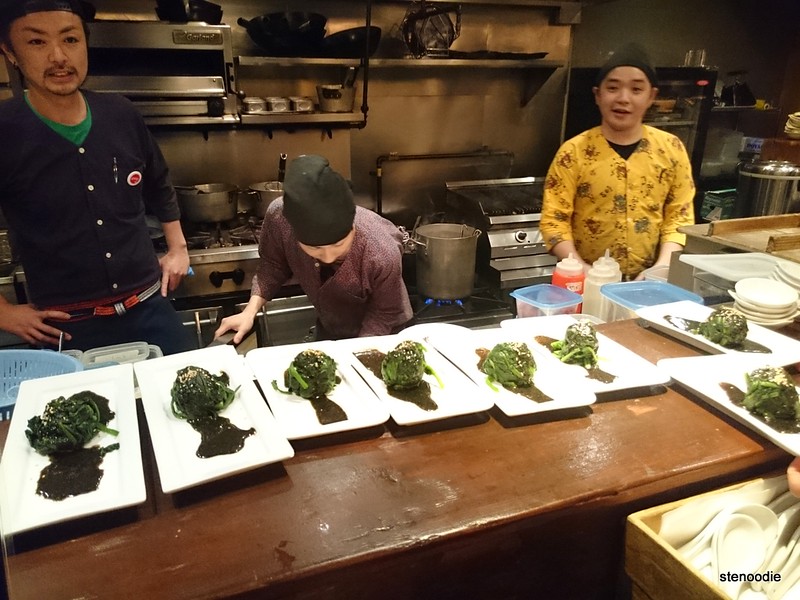 What a pleasure it was to sit at the bar and get to see all of the dishes that came out from the kitchen! 🙂 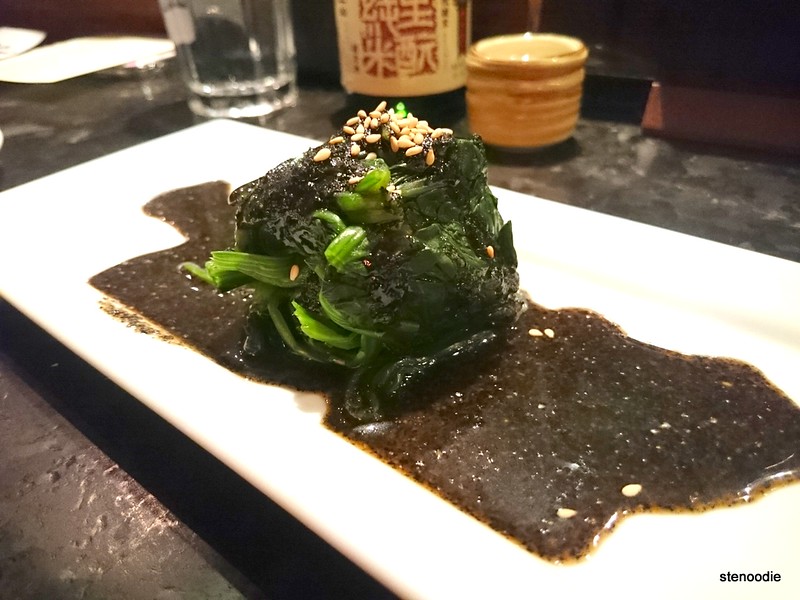 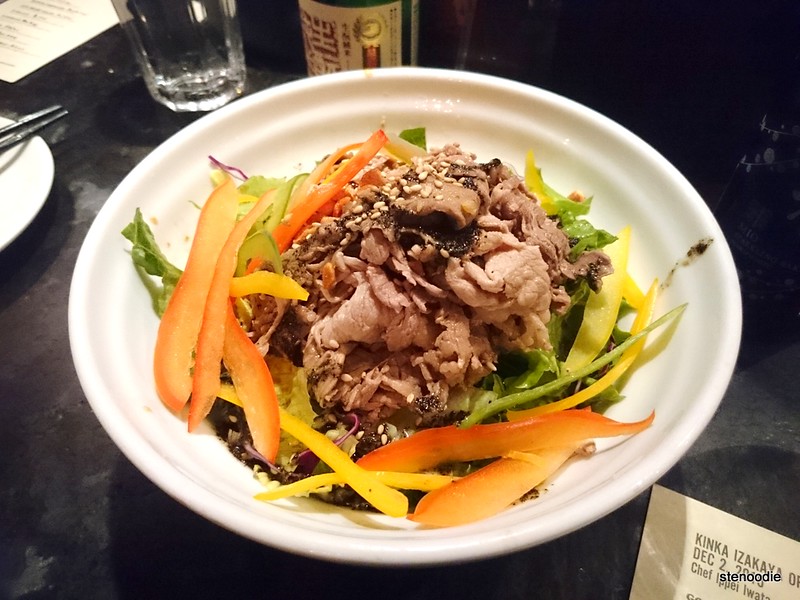 The second dish was the Gyu Shabu Salad.  This contained shabu-shabu beef on greens with black sesame dressing.  Since this was a black sesame dressing and not a sauce, it was lighter and not as thick as the one in the Gomaae.  This was a big bowl of beef with greens pretty much!  The shabu-shabu beef had a light touch of juice in it and fried garlic that made it really tasty.  Some of the beef slices though were a little overdone so it wasn’t completely tender.  The greens were extremely fresh though and I found it was a good reprieve from the beef. 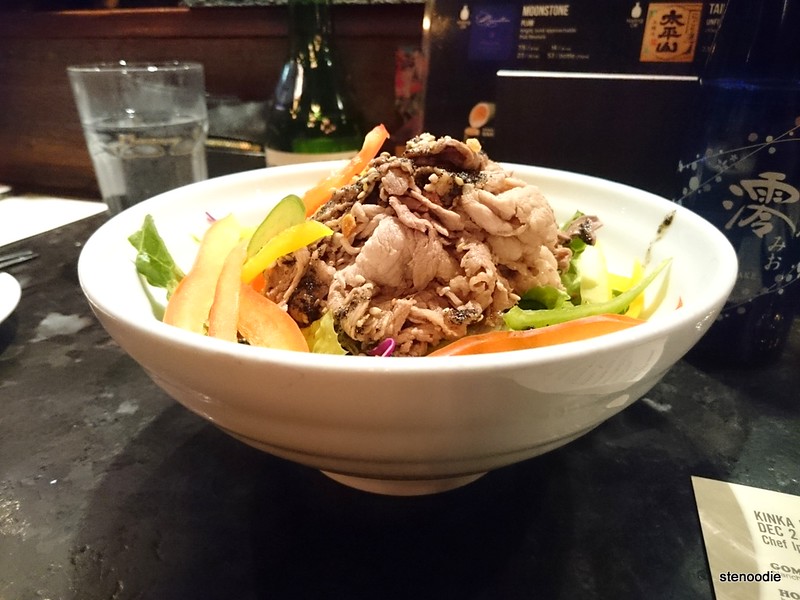 Side view of the Gyu Shabu Salad 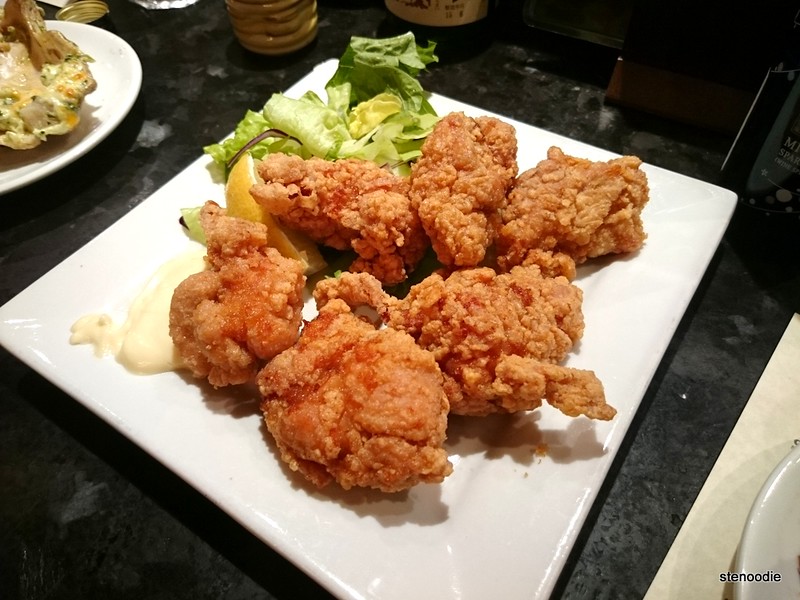 Our third course (they were arriving very quickly and we sometimes didn’t have enough room to put all the dishes!) was the Karaage.  Mmm, I LOVE karaage!  Those of you who read my blog often and thoroughly know that I love ordering karaage to know how the taste differs between different restaurants.  This was a deep fried soy sauce marinated chicken with garlic mayo.  I didn’t distinguish too much of a garlic taste in the mayo, but the fried chicken was quite good!  They were decently sized, nicely fried, and tender throughout.  Pretty good! 🙂 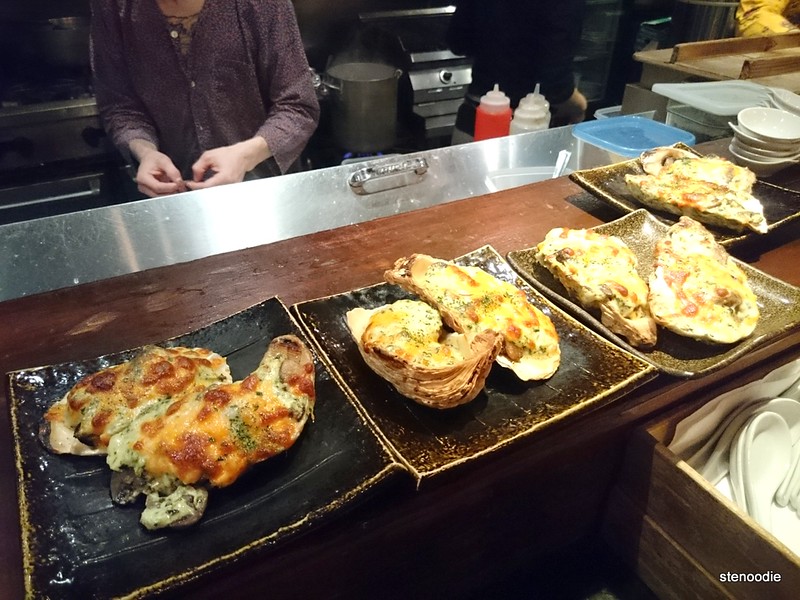 By sitting at the bar, you could see exactly what the upcoming dish was going to be. Mmm, baked oysters! 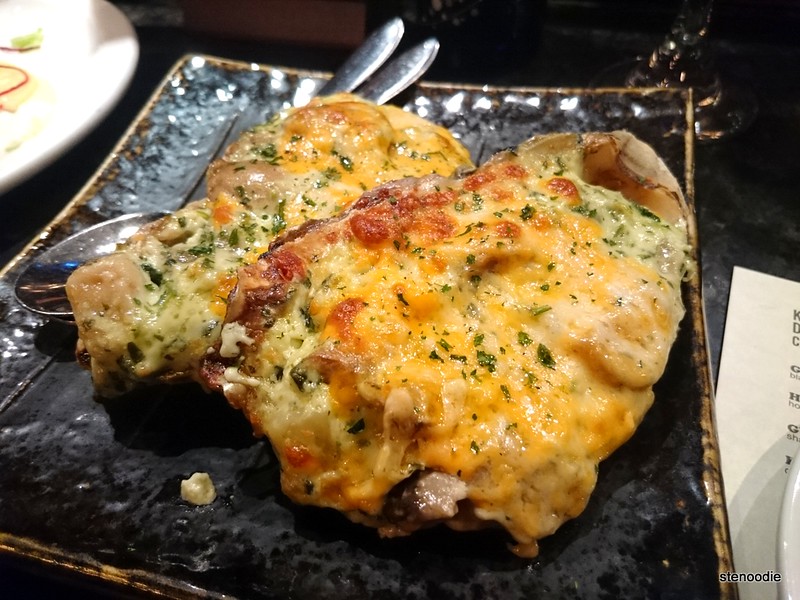 Kakimayo
-baked oyster with spinach, mushrooms and garlic mayo, and topped with cheese

There was much to be excited about for the fourth course.  It was Kakimayo: baked oyster with spinach, mushrooms and garlic mayo, and topped with cheese.  Mmm!  Even the presentation was fantastic and it smelled so good!  The oyster was filled with mushrooms and the chopped up pieces of oyster and covered fully with cheese and garlic mayo.  The consistency of the cheese almost tasted like cream cheese to me.  This was so delicious, especially the mushrooms which were so soft and blended terrifically with the cheese.  One of the best dishes at Kinka Izakaya!  I remember loving it the last time I had it too. 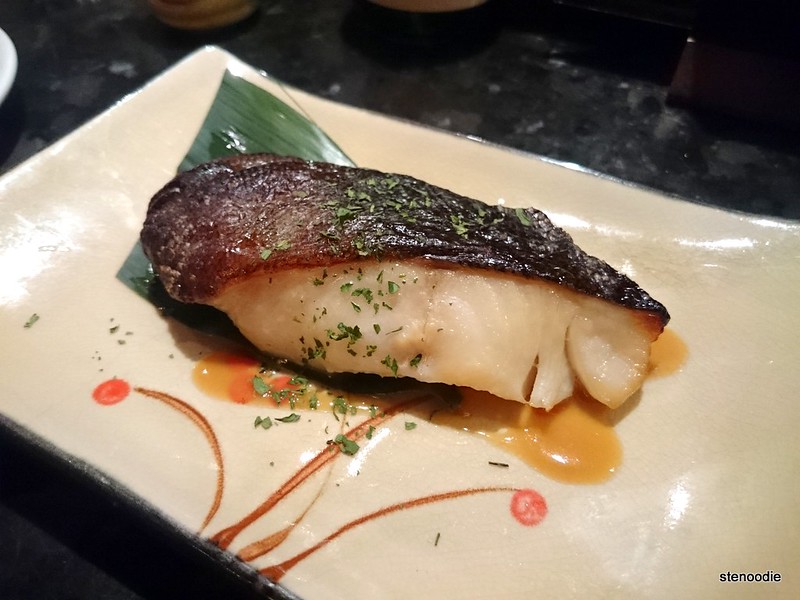 We had the Gindara next.  It was a grilled miso marinated black cod with yuzu miso sauce.  I love yuzu!  It’s a great citrusy pop of flavour with fish.  The black cod was grilled perfectly so that it was very flakey and tender.  It was so soft that it tasted almost buttery too.  Yum!  I remember having a really good black cod at Nome Izakaya last year too.  Delicious! 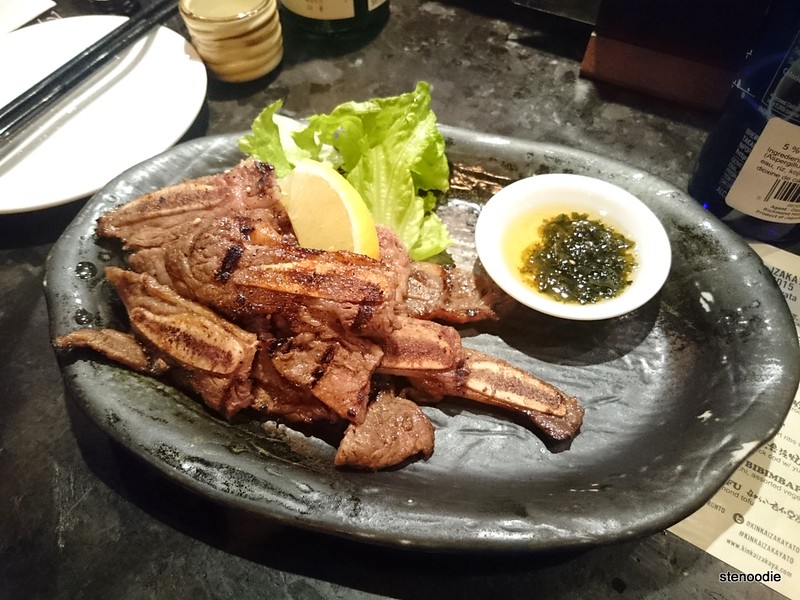 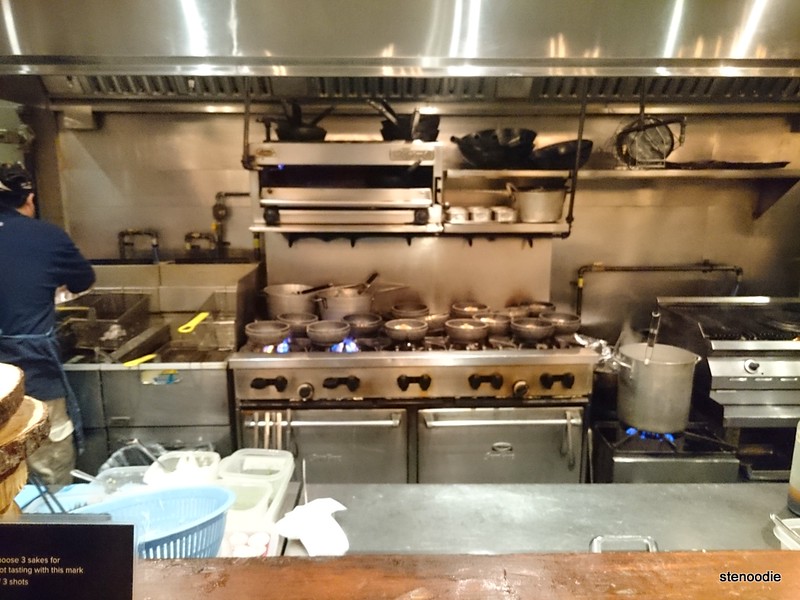 From my seat, I could see the stone bowls being heated up. They place the rice and ingredients into it to cook it and serve 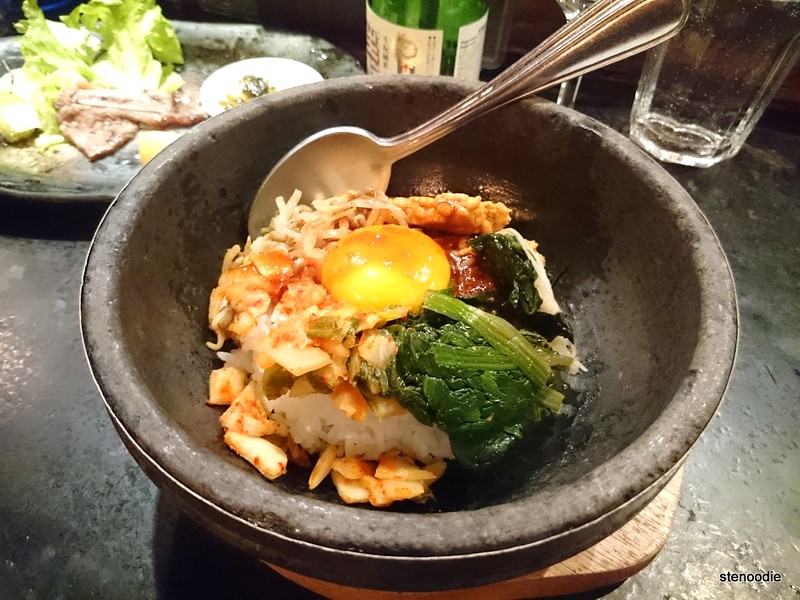 Last but not least, we had the Buta Kimchi Bibimbap.  It contained rice, ground pork, kimchi, assorted vegetables, and egg in a sizzling stone bowl.  I was a little surprised that they were going to serve a stone bowl rice bibimbap as part of their offerings for the menu tasting.  We were definitely very full by this point, but I can never pass up food.  While watching how they were preparing this dish from our seats, I noticed that they placed the entire stone bowl onto their stoves.  They set dozens on them straight on to the hot stove.  It was quite fascinating to watch!  I actually never knew that that was how hot stone bowls were prepared.   It makes sense though.  Silly me. 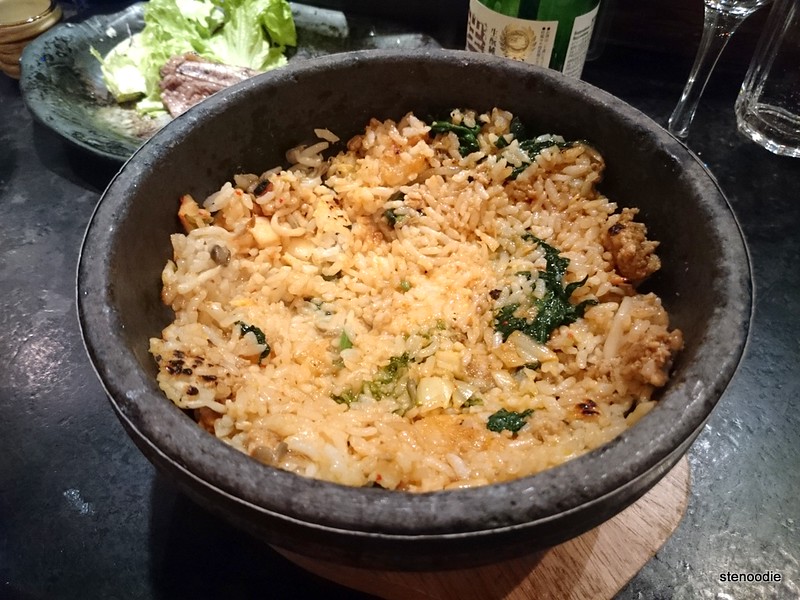 The Buta Kimchi Bibimbap after being all mixed up

This meant that when they were cooked and ready to be served, we had to be really careful and not touch the stone bowls.  They were immensely hot since they had just come off the grill.  The server was thoughtful and made sure I took a picture of the stone bowl first before he mixed it up for us to eat. 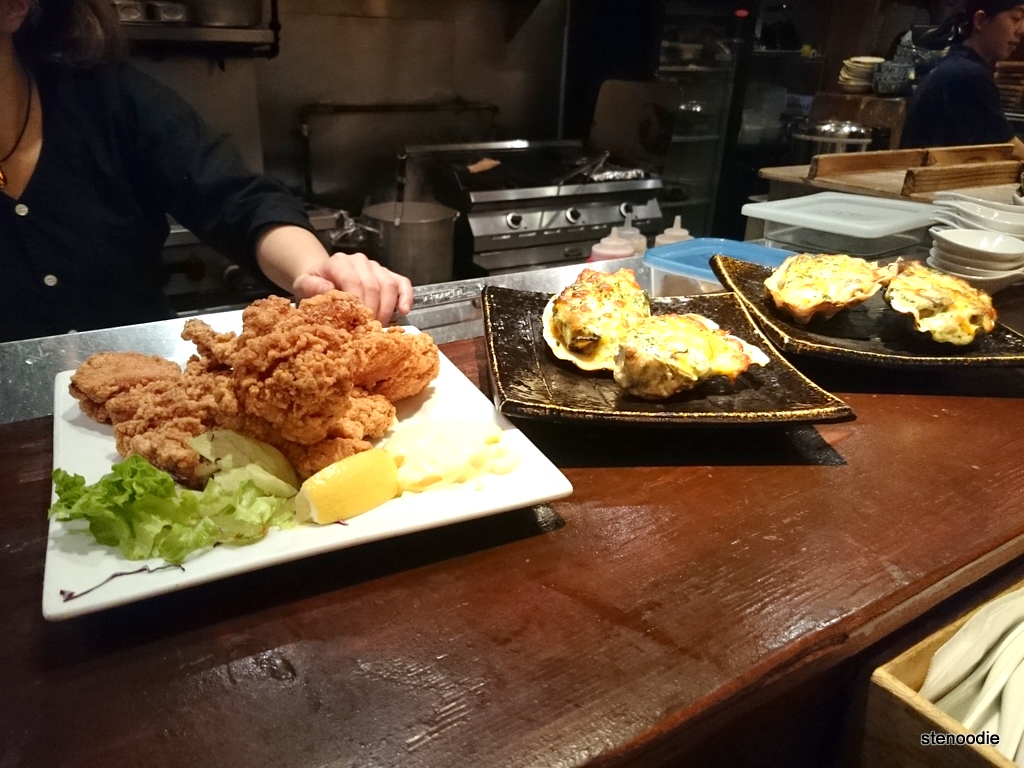 Again, it was so fun to watch all the dishes come out from the kitchen. Everything looked amazing! 10/10 for presentation points!

Even though this was just a bibimbap dish, I liked how the hot sauce infused perfectly into the rice so that every bite was evenly spicy.  After everything was mixed together though, I couldn’t see or taste the ground pork or egg anymore.  I only saw some of the spinach.  This was an okay dish, but cooked very well. 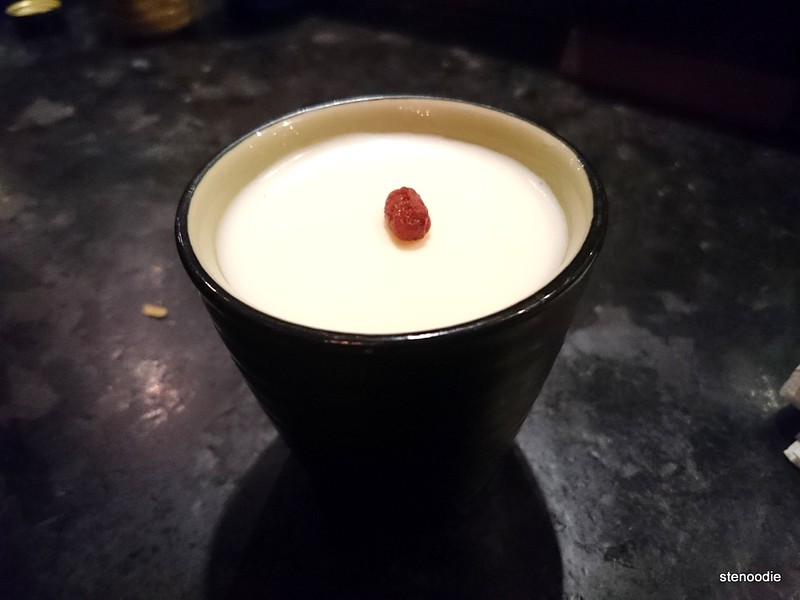 Last but not least, we had our dessert!  It was an Almond Tofu and they call it “world’s smoothest almond tofu”.  It was topped with a small golgi berry in a small cup.  It definitely was very smooth and smell amazingly of almond.  I liked it! 🙂 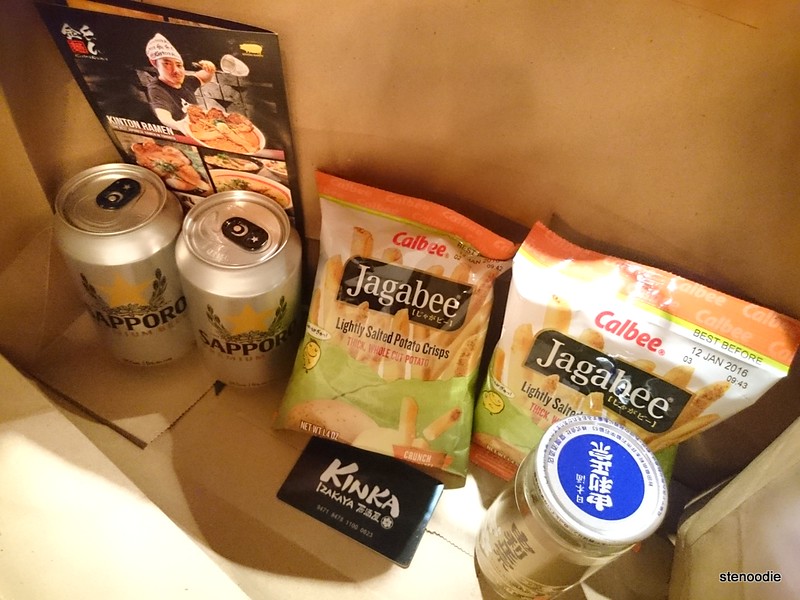 Gift bag goodies! Sarah received a gift card while I got a glass cup!

Before we left, we received our giveaway bags.  We received our bag corresponding to what number we picked.  Sarah picked 22 and I picked 10.  We both received the same things in our lovely swag bag except while I had a nice glass cup, Sarah got a $30 gift card to use towards her next visit at Kinka Izakaya.  The server told us that there were only nine such gift cards in the giveaway.  Lucky!  The rest of the goodie bag contained two cans of Sapporo beer, one bottle of sake, two bags of Japanese crispy potato chips, and a promotional flyer of the restaurant.  How cool!  I’ve never received such a hefty goodie bag before from a blogger event.  Thank you! 🙂 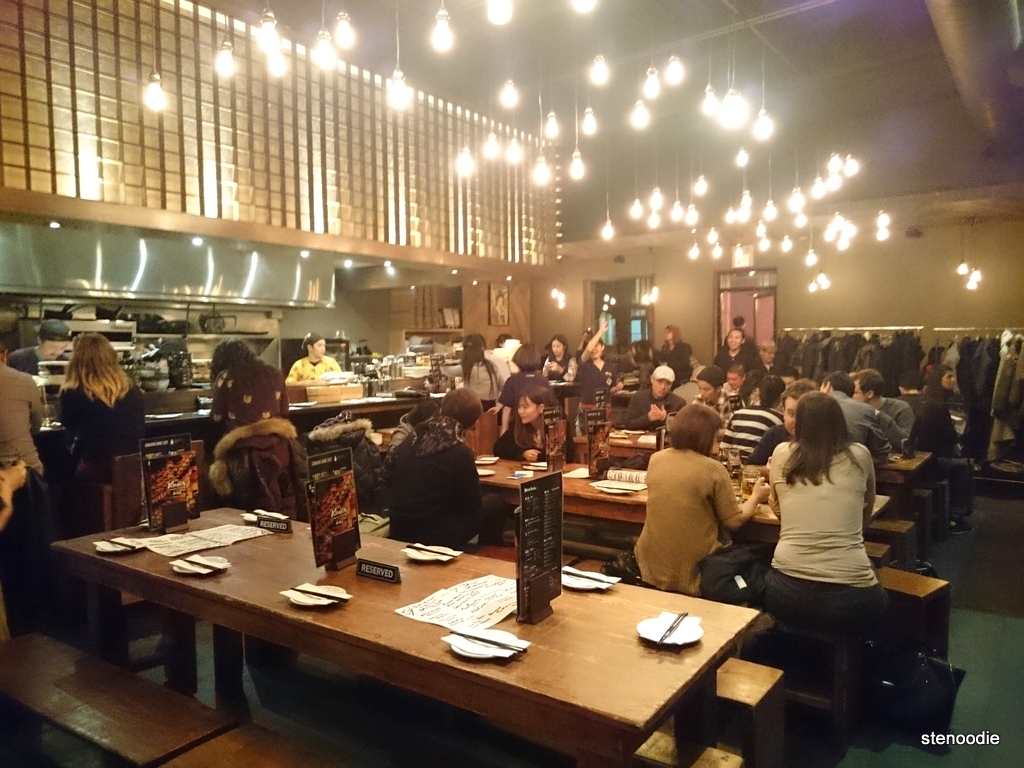 Another view of Kinka Izayaka 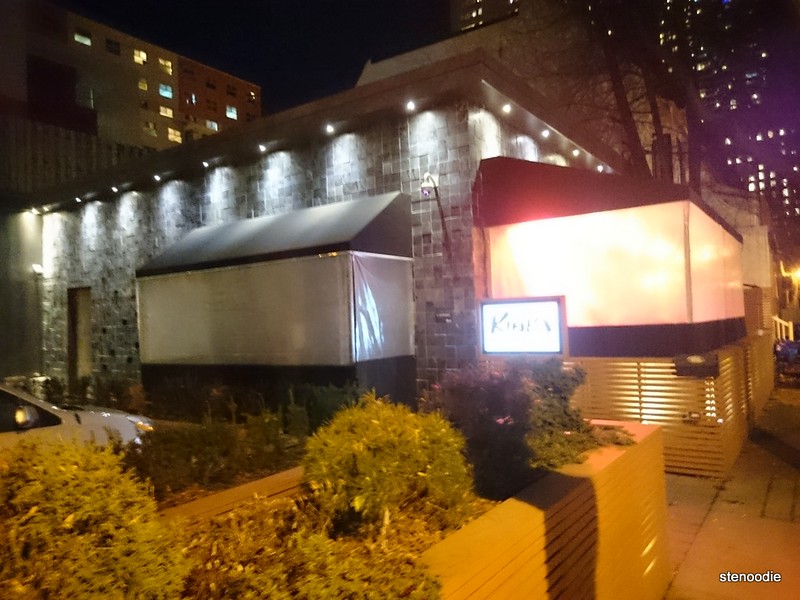 When we exited the restaurant, we were again echoed with many loud cheers from the staff.  It was so lovely and fun.  I’m really grateful that I got to attend this special dinner tasting. 🙂  Thank you once again, Kinka Izakaya, for the wonderful invite, friendly hospitality, great service, generous portions of food, and I hope to try more great tastings in the future! 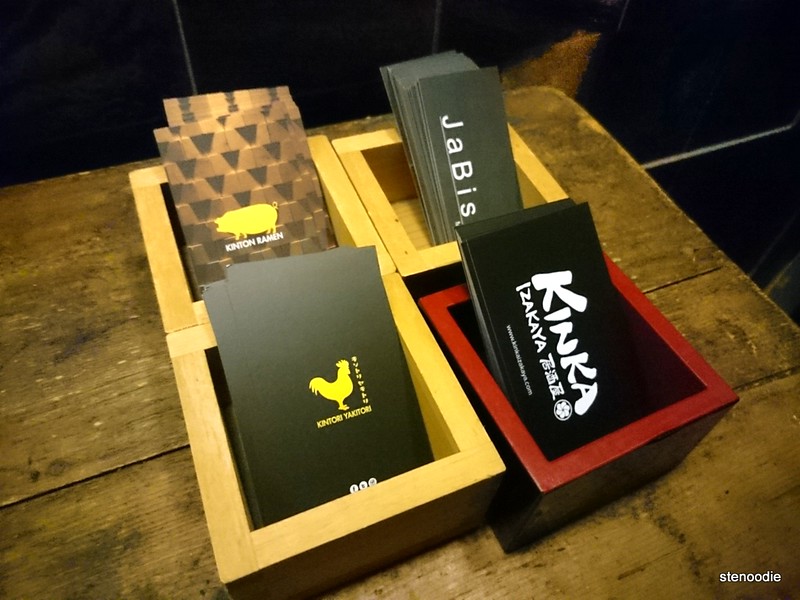 They are also connected to Kinton Ramen, Yakitori Kintori, and JaBistro! All of which I’ve been to (and blogged about)! Haha… amazing

FTC Disclaimer:  Although Kinka Izakaya Original reached out and invited me to a complimentary tasting at their restaurant, the opinions expressed here represent my own and not those of the restaurant.