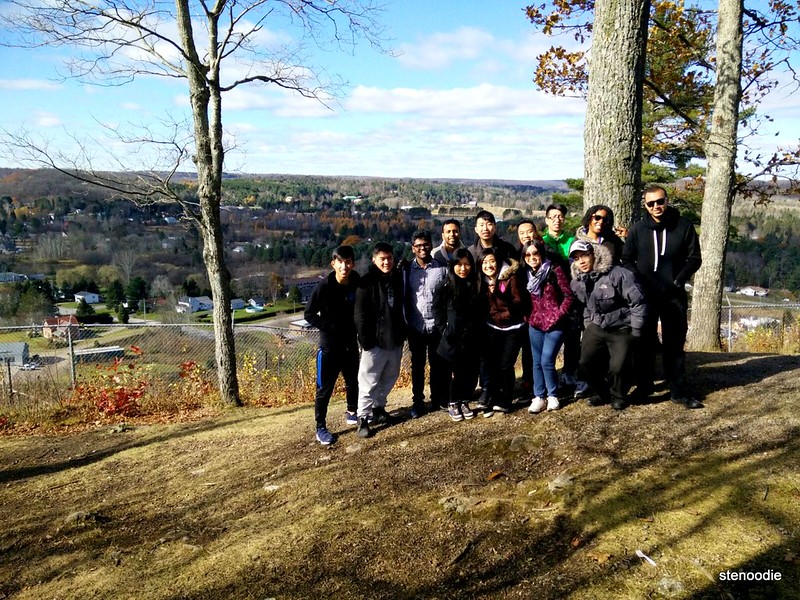 The last time that we had a leaders retreat was in the summer when we went to beautiful Happy Harbour in Muskoka.  It was an EC retreat where most of the ECs and up got together for a nice weekend by a private lake and we relaxed and ate and learned together.

This time, because the team is growing and there are many more ECs in the team, the MCs each picked an EC to come on this exclusive MC & Prep Retreat.  We went to Pinestone Resort & Conference Centre in Haliburton for this weekend getaway.  Coincidentally, we were away the weekend of Halloween! 🙂 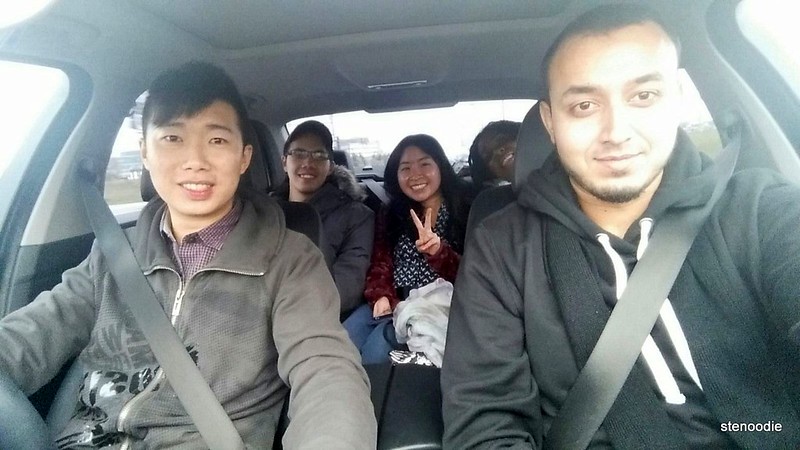 Selfie in the car ride there; stuck in the middle seat :p

After a quick breakfast at Goldsor Restaurant on Friday, October 31, we carpooled in about 3 cars to drive 1.5-2 hours up north and east to Haliburton.  We had a short pit stop at a small gas station and convenience store before we arrived at the first of our three activities for the day. 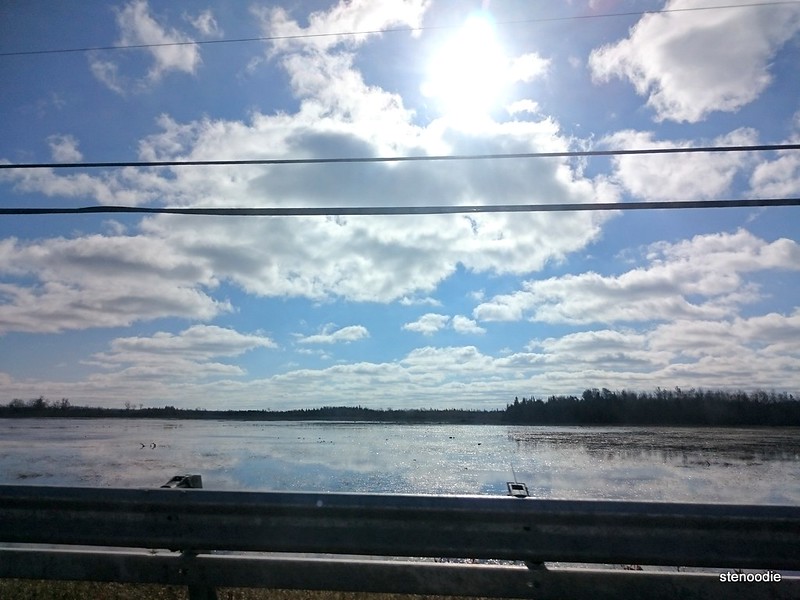 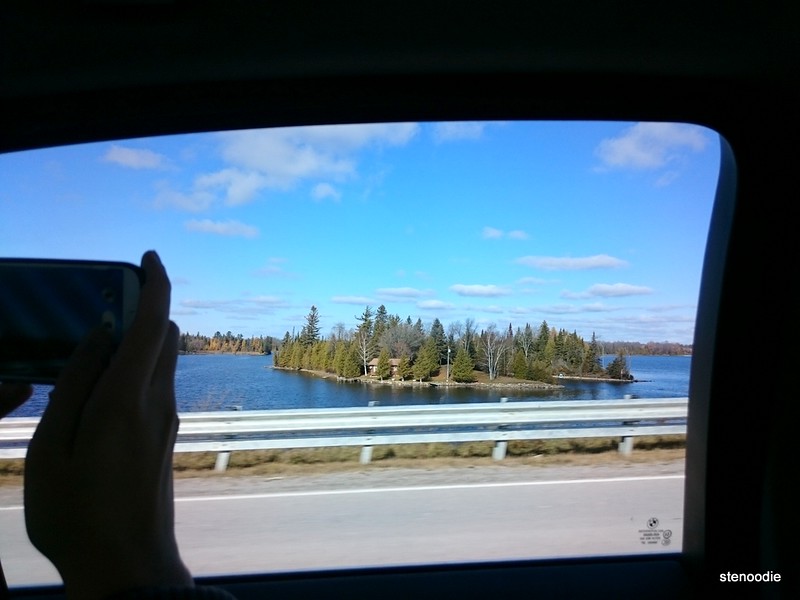 A nice getaway from the city and seeing views like these! 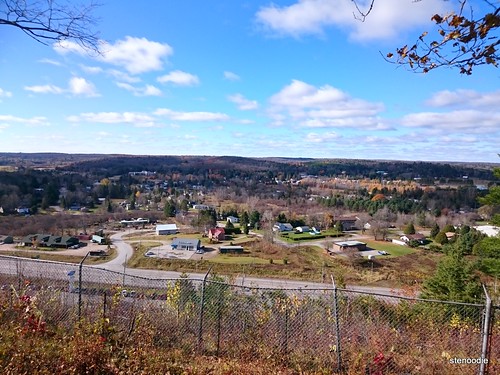 It was a relatively cool autumn day with a breeze and a little gloomy so there wasn’t too much to see.  We stopped at Panorama Park in Minden, took some pictures from the top of the hill, and then drove to our next “activity”. 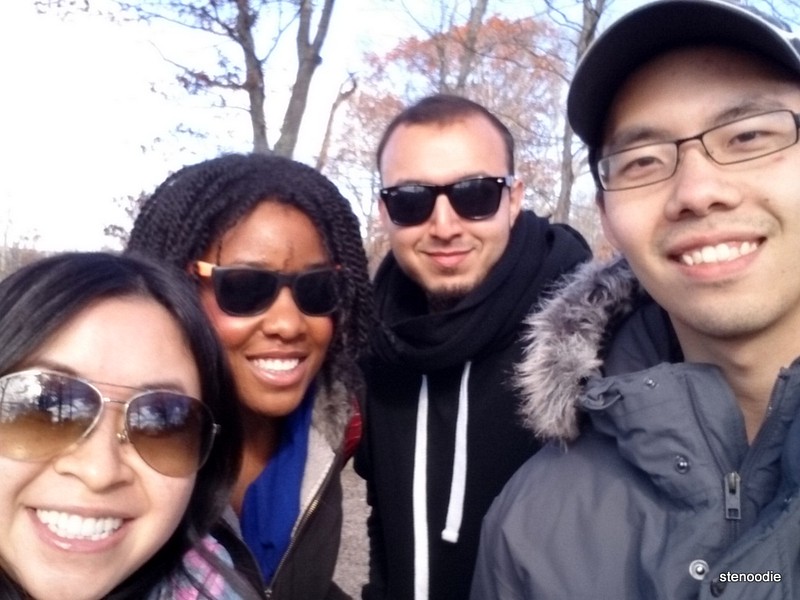 First group selfie of the day!

We were at Haliburton Skyline Park.  The view was beautiful.  Now if only we had arrived a weekend or two before the autumn leaves fell, it would have been an even more amazing sight!  You could literally see all the tops of the trees over the city.  We tried to take more pictures here.  Funnily enough, nobody brought selfie sticks this time around.  On my very first EC retreat, I remember we bought out the selfie sticks in the gift shop, haha. 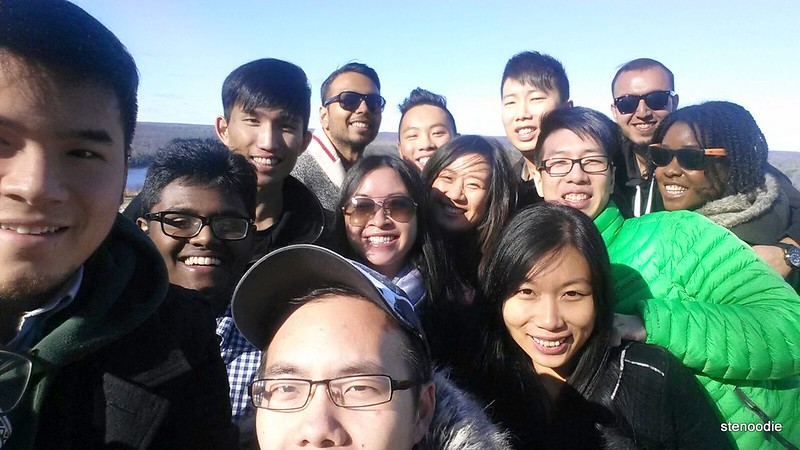 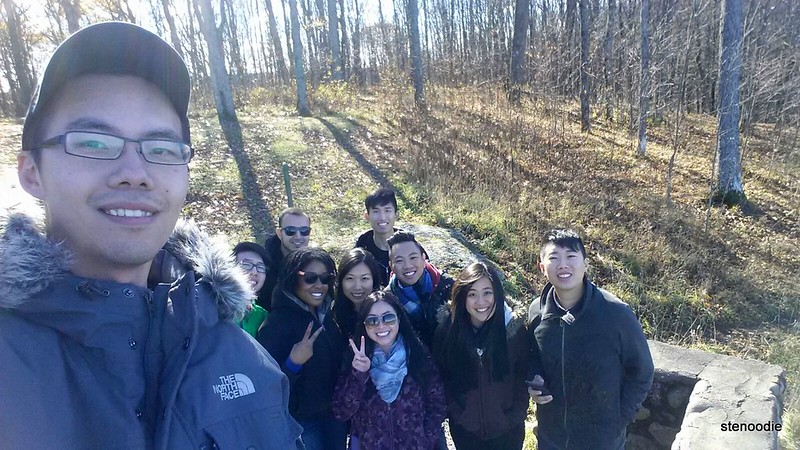 This one taken by Jason standing on top of the ledge… careful Jason! 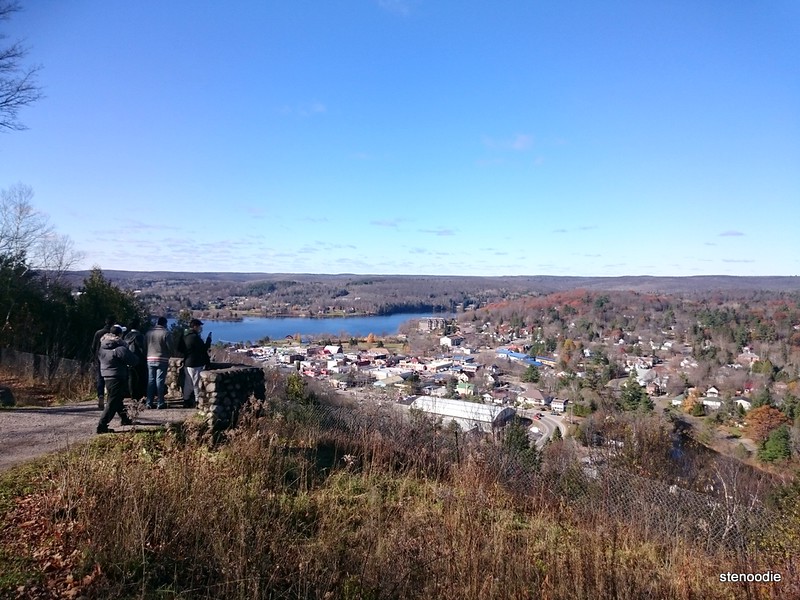 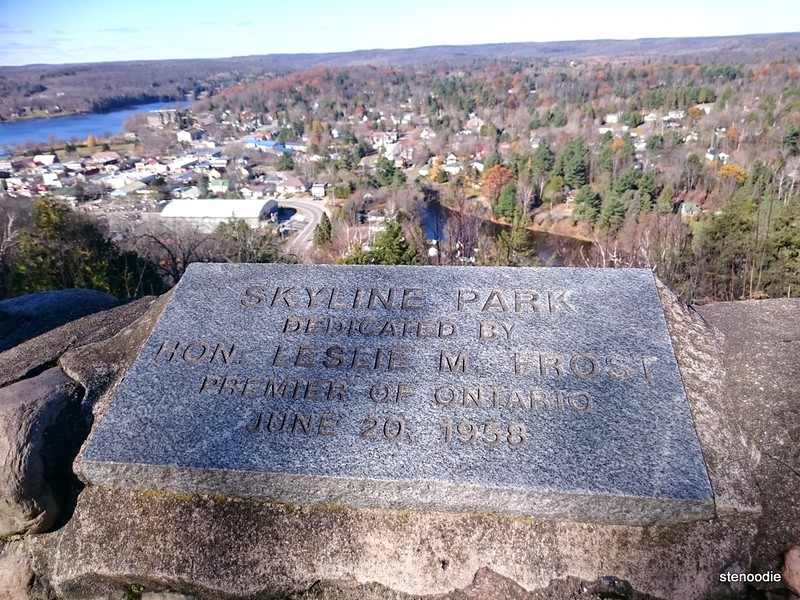 If only we were here a week earlier, the scenery below would the been beyond gorgeous! 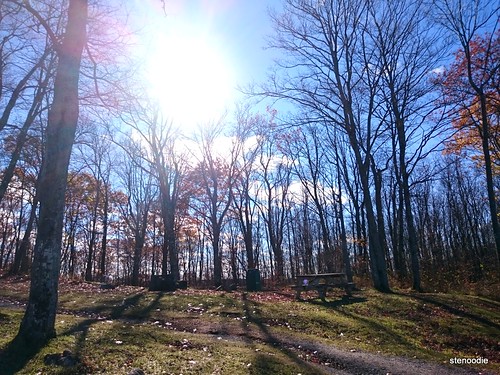 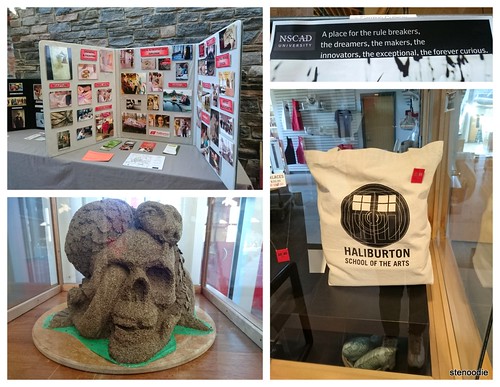 Artwork at Haliburton School of the Arts

Finally, our last stop of the day before we arrived at Pinestone resort was called Haliburton Sculpture Forest.  Now this was actually really neat!  First, we walked into the community centre where we saw some artwork from the school in Haliburton.  Then we went outside into the woods where we came upon certain sculptures that were embedded throughout the Sculpture Forest.  It was actually really cool!  The art was fairly unique and it was such a nice fall day to walk in the woods. 🙂 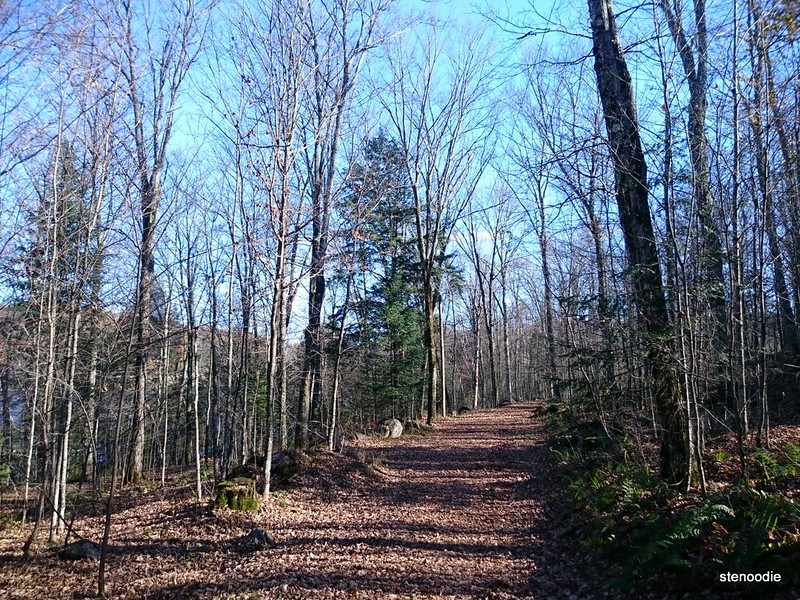 We started on our hike in Haliburton Sculpture Forest 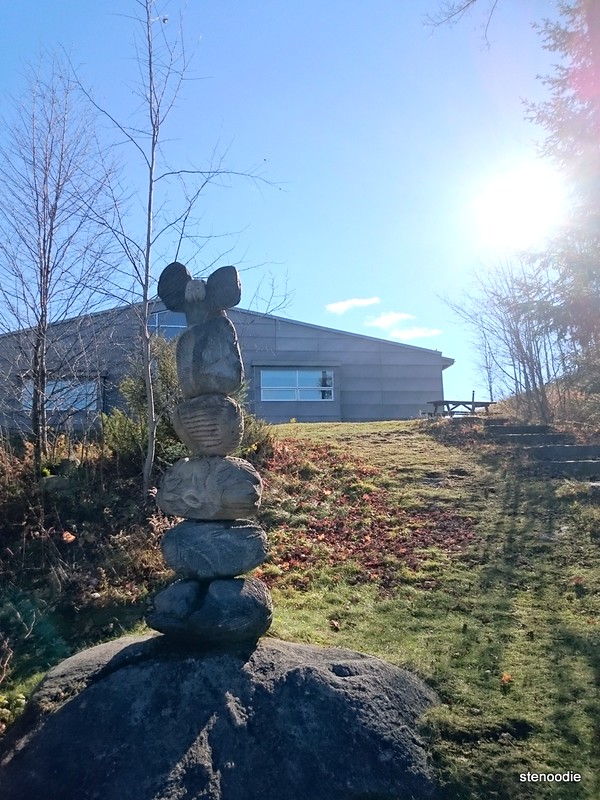 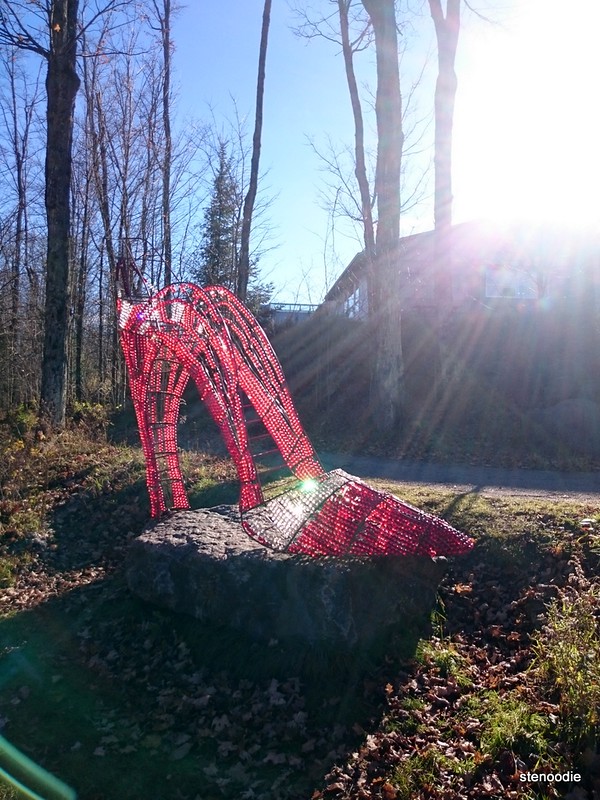 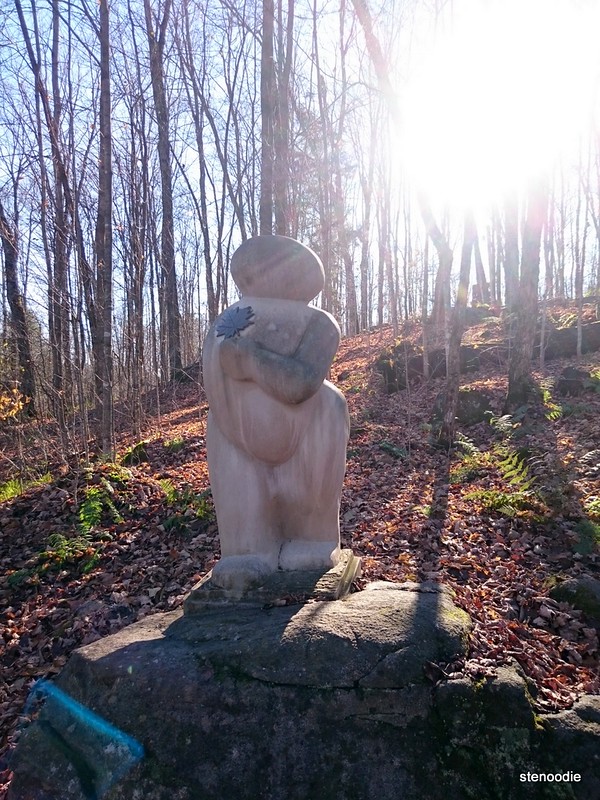 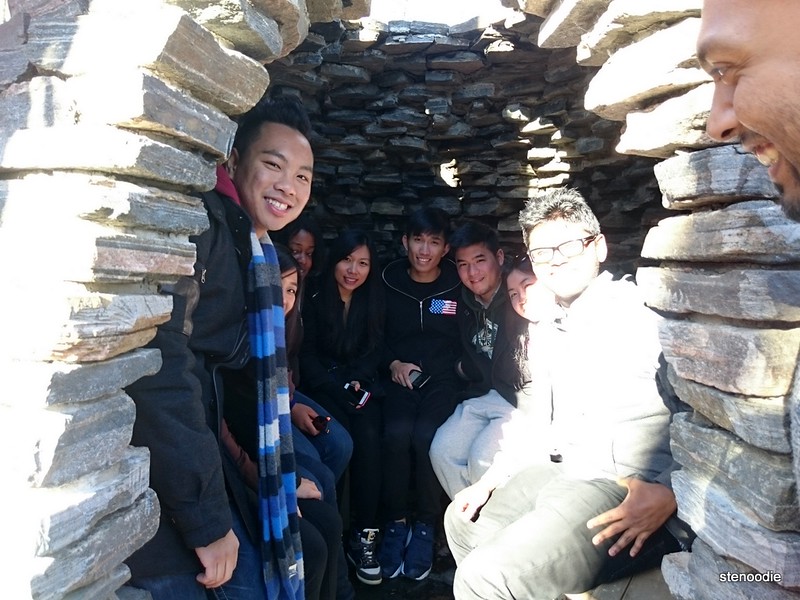 This was cool! We all sat around in this sphere

This is what it looked like from the outside 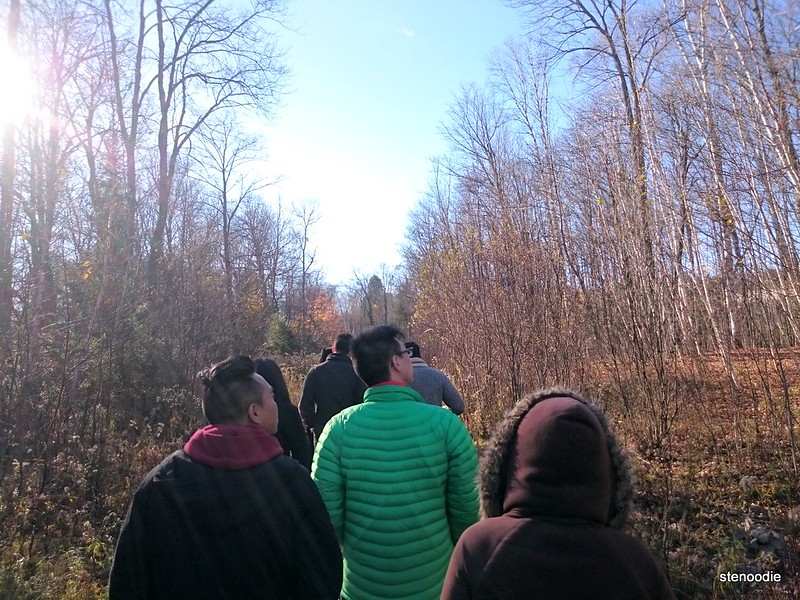 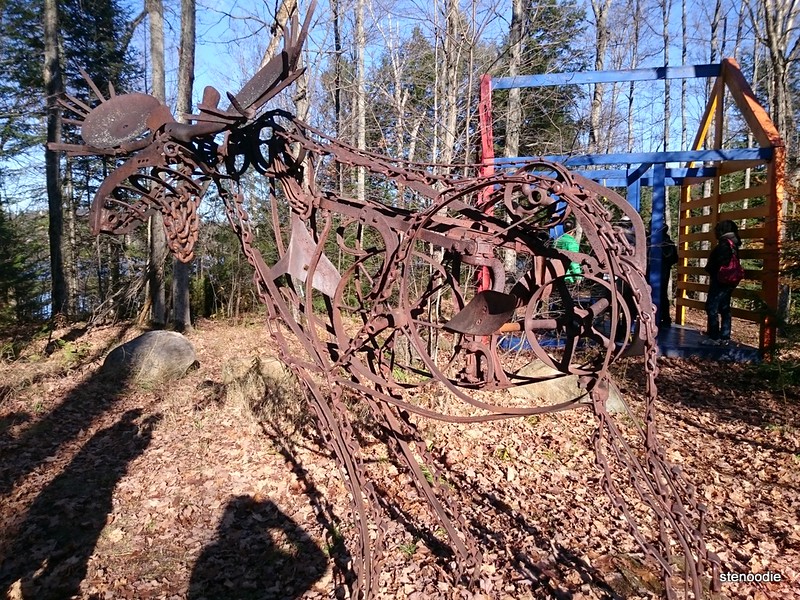 Metal moose with a colourful house behind it

There was an interesting rock too that faced out from the path.  Only those who “dare” to take one step further would be able to see what’s on the other side of the rock.  Sometimes you just don’t know what to expect of something if you don’t take the first step.  Don’t assume. 😛

This is the rock! 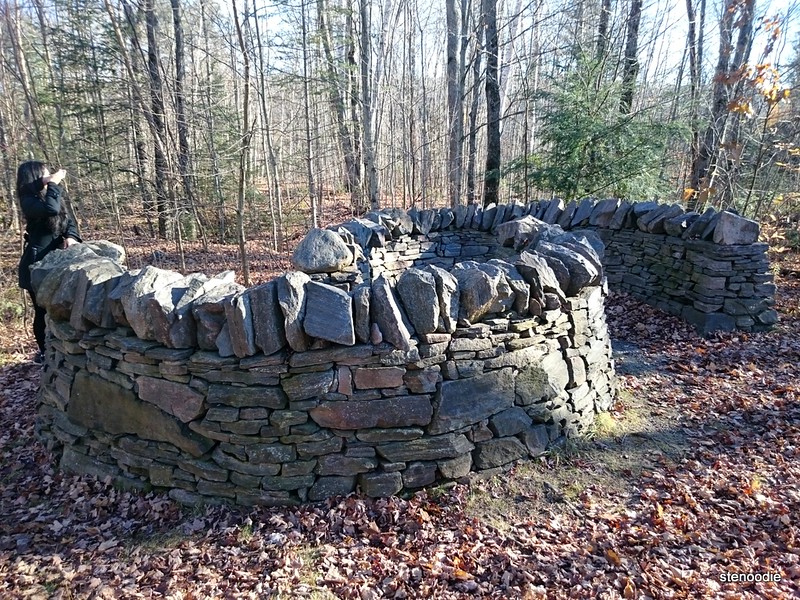 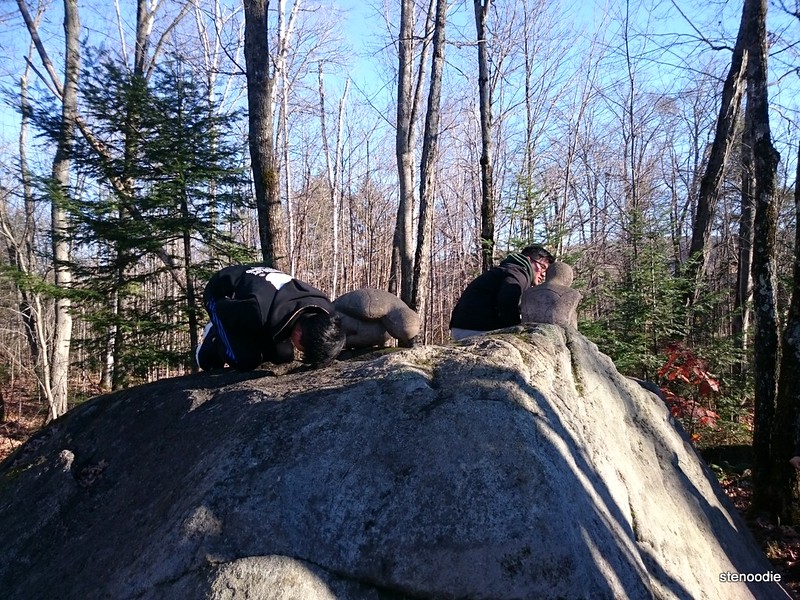 After some more pictures, we drove to the Pinestone Resort chalets and checked in.  I was so happy that there was wifi in the reception area since I was running low on my data plan. XD 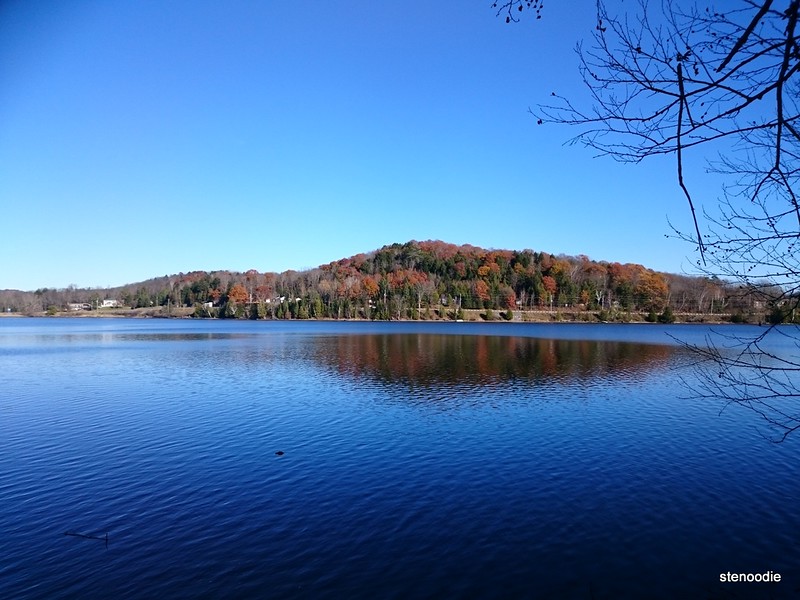 We settled in.  The girls took one villa house while the boys took the other two.  All three villa houses were linked together.  It was beautiful inside and so cozy, especially with the fireplace on.  We had our own private land complete with two small bridges as our backyard.  It was really, really peaceful and nice there. 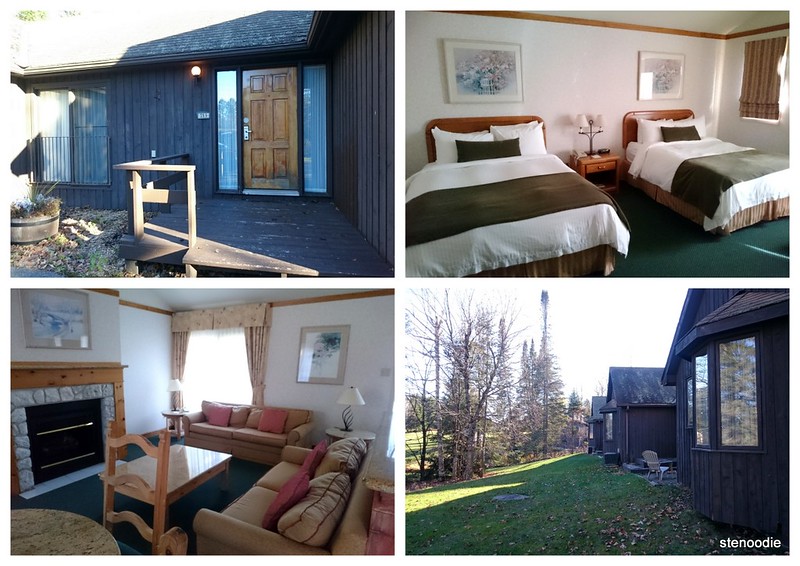 Villa 713 for the girls. It was so nice and the bed was so incredibly comfy!

Unfortunately, although their website advertises that free complimentary wifi would be provided to all guests, it just so happened that their wifi system was out of service that day… and the entire rest of the weekend.  This put a little damper on me because I really wanted a weekend to relax with the leaders, learn, and take advantage of wifi to share pictures and various things throughout the weekend.  Like Ray said, if a resort or hotel states that they have certain amenities for their guests, they need to follow through.  Wifi doesn’t seem like such a big deal when it’s not working or out of service, but imagine if the beds were missing or the water wasn’t running, then for sure, we would feel justified to ask for a fee adjustment or something — because they aren’t fulfilling what they promised.  It’s actually not acceptable that when we called to ask about the wifi that they simply said, “If it’s not working, then it won’t work for the rest of the weekend.” -_-

Regardless, the rest of the afternoon was spent checking our volume for the team before we headed out for dinner.  As you might have read in my review about The Pepper Mill Steak & Pasta House, I was absolutely famished at dinner.  Dinner was great though! 🙂 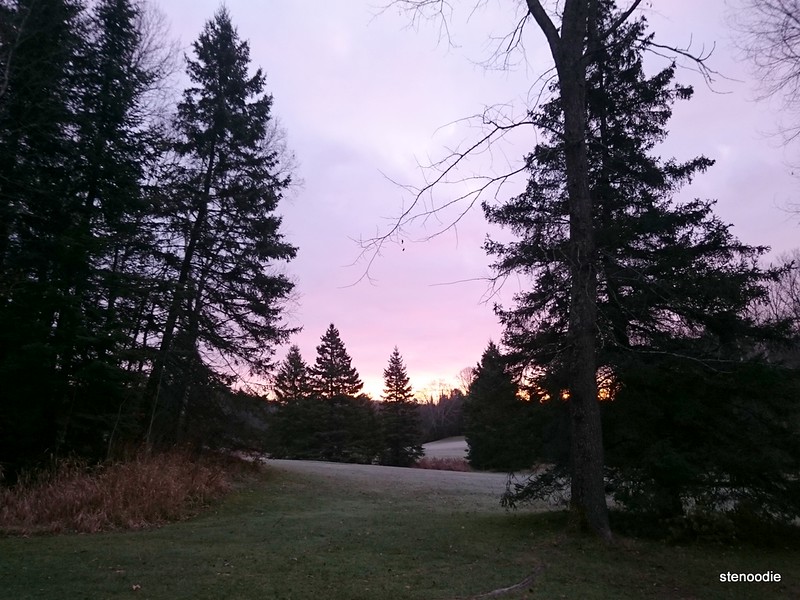 Good morning sunrise from the backyard!

The next morning was the first day of our learning day!  Yay!  (It was also Halloween.)  Some of us had breakfast at the restaurant inside the reception building first — Heatherwood Restaurant.

The rest of the second day was all devoted to learning and building our leadership in order to be a stronger team.  The focus was on personal and team growth.  We sat in a circle around the fireplace (sofas taken out of the living room so as to prevent people from falling asleep XD) and we discussed and had a question and answer period.  We had some more friends and extra special mentors drive into Haliburton to join us later in the day too! 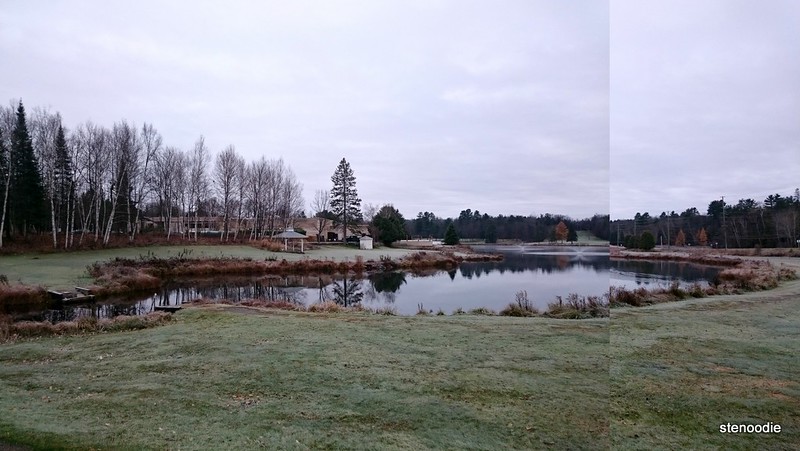 For dinner, we went to Win Yeung Chinese Restaurant.  Egg rolls, sweet and sour chicken balls, negative horoscopes, and fortune cookies were the theme of the night haha. 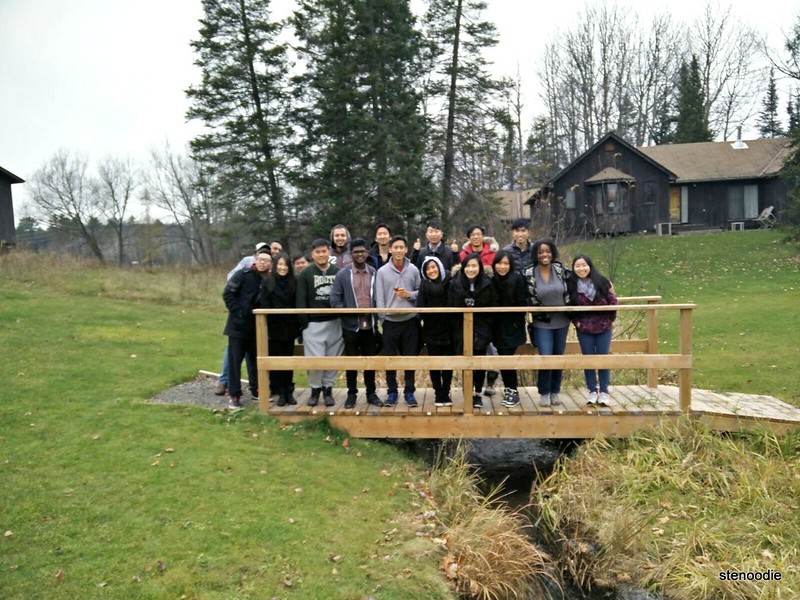 Group shot on one of the bridges in the large yard 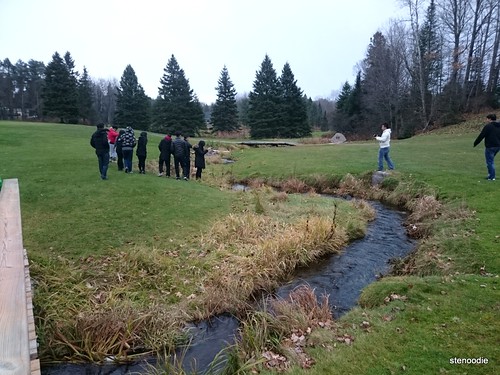 Taking a stroll in our backyard before dinner 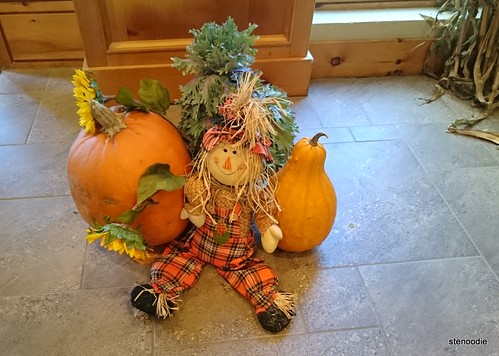 Since it was Halloween night, the resort actually had a small haunted house going on in their basement.  We all went to check it out.  Albeit a bit small, everyone said that it was a fairly great haunted house put together by a resort.  It’s like Halloween Haunt or Screamers in Toronto. 🙂  I think we should have went in for a second round after the first one since it was so short, haha. 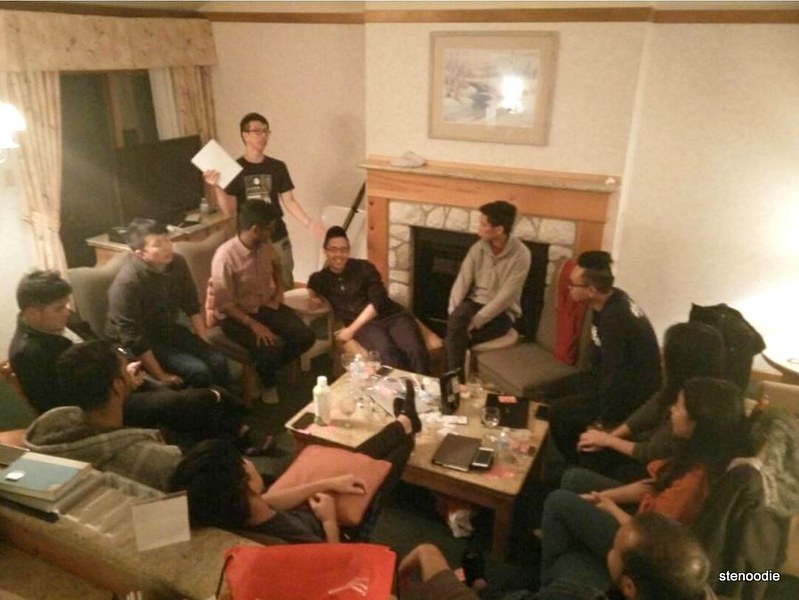 The next morning, we slept in a little bit before we packed our things away and headed to Baked and Battered for a fish and chips brunch.  And then after that, we were on our way home!  (Some of us headed to Ronny’s for GSD and then later dinner so it became a long eventful night.)

A group shot in our “backyard” 😉

All in all, it was a really good weekend to getaway and spend time with the team.  I would have liked to spend a little more time in the Sculpture Forest to see the rest of the neat artwork and for the damn resort to have wifi for perusal for the weekend, but other than that, it was a really worthwhile weekend. 🙂  I can’t wait to have more getaways with the team!  Can you guess where we’ll be going to next time? 🙂

$8 for $15 of Seafood at The Battered Fish from Groupon: 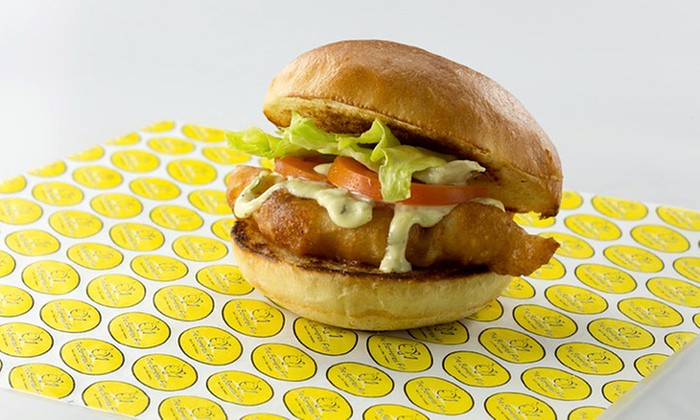