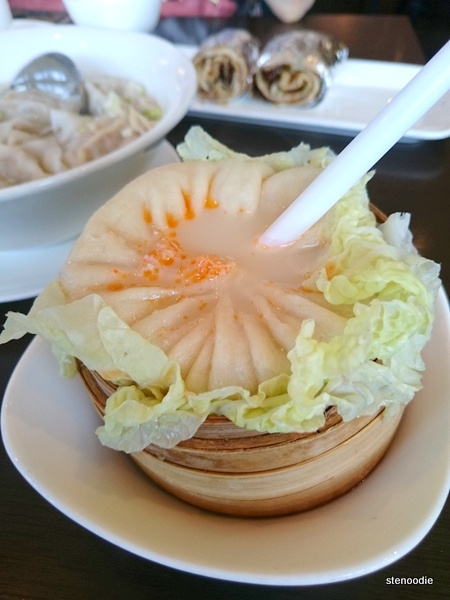 For a quick lunch after Zumba class on a Saturday, we went to Yu Garden for lunch.  Yu Garden is located near Bayview Ave. and High Tech Road in Richmond Hill.  Its nearby restaurants include a Hero Burger, Osmow’s, Starbucks, and Tim Hortons.

On its entrance and storefront sign, it says that Yu Garden is “The Original Dim Sum House since 1990”.  This was news to me because I had never heard about Yu Garden before and especially not about their long-standing history.  Yu Garden serves Shanghainese food that you can order off the order sheet. 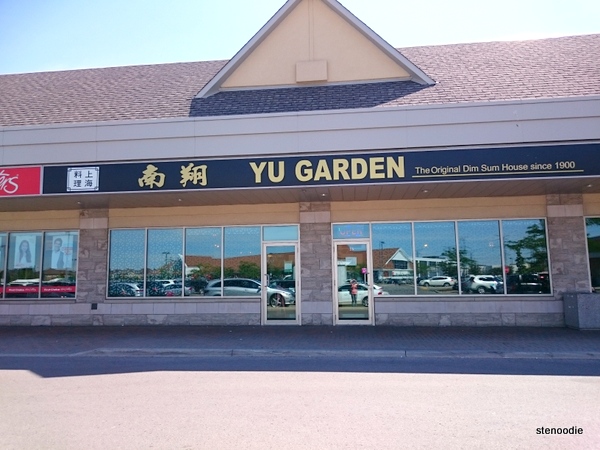 Yu Garden near major intersections of Bayview Ave and Hwy 7 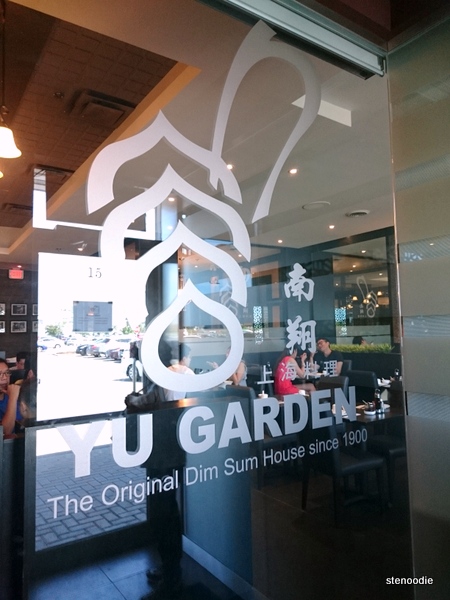 The interior of Yu Garden looked very sleek and classy.  I could tell without even looking at the menu that the prices would be a little bit inflated and they definitely were.

It was very sleek and classy inside

We ordered two things on this visit, the Chilled Marinated Beef and the Shredded Pork, Pickled Cabbage & Noodles in Soup.

They had free wifi in the restaurant. 🙂

It was interesting to note that on their order sheet, they distinguish the prices between “member” and “non-member”.  If you are a non-member, the prices are about $1 to 2 higher in price.  Wow… they are really trying to milk customers for their money here!

The Chilled Marinated Beef looked great in presentation but didn’t taste that great.  It lacked flavour and was very rough to chew through. 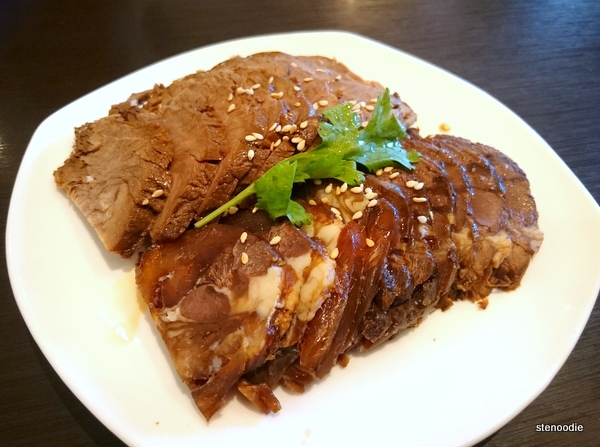 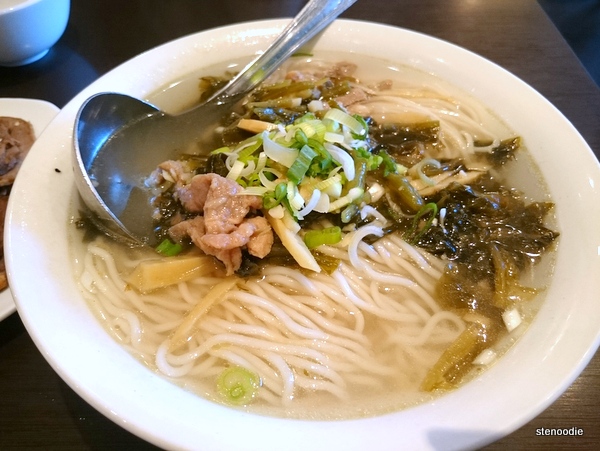 The Shredded Pork, Pickled Cabbage & Noodles in Soup was a decent bowl of typical shredded pork with pickled cabbage and noodles in soup.  I thought that the portion was a little smaller than most noodle soups and considering that it was $8 didn’t really leave a good impression for me.  The noodles themselves were firm and tasty though. 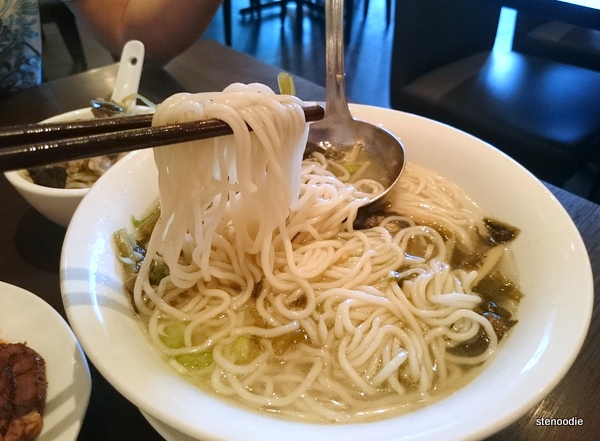 While we were eating, I noticed that one of the other tables had ordered a steamed bun with a straw through it.  That was when I realized that I had seen some of my friends order this before and that was from here!  I already knew that I wanted to order it next time because I definitely wanted to try that.

Our lunch was short as we intended and we left.  I will amend this post with the steamed bun when I come to try it next time!

Before I make my second visit to Yu Garden though, my first impression of this restaurant is that it is very fancy but overpriced.

True to my word, I returned to the Yu Garden so that I could try out their well-known “dumpling through a straw” item on their menu.  (I returned almost two months after my initial visit, haha.)

On this visit, we ate here again on a Saturday but this time later in the afternoon around 1:30 p.m. so there were a lot more people here in the restaurant than during my first visit.  Almost every table in the restaurant was full! 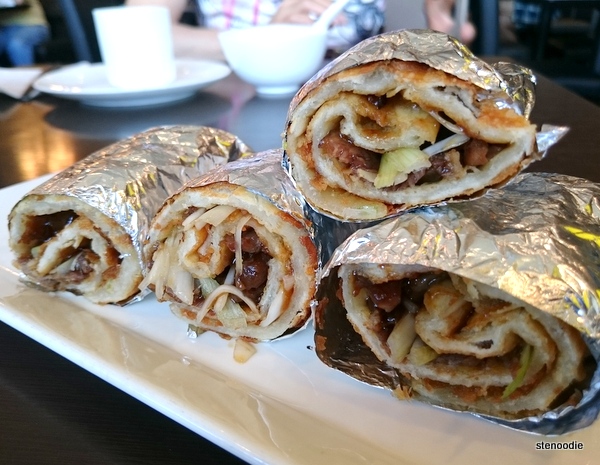 The Onion Pancake Filled with Beef arrived first.  It was an onion pancake rolled up and filled with beef and sauce.  It was wrapped in tin foil and then cut up into four pieces so it was handy to hold it in hand to eat like a burrito.  We both really liked it because it was so savory and tasty.  I could have eaten more since the four pieces were quite small. 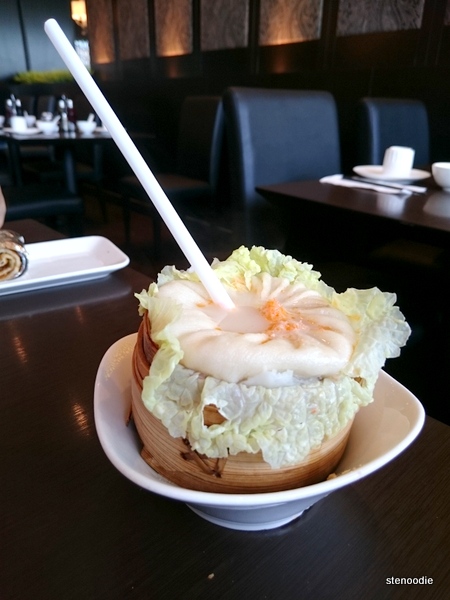 The King Size Nanxiang Crab Roe Soup in Steamed Bun arrived next.  I was so excited for this!  It was definitely worthy of a photo (no matter if you are a foodie or not 😛 ).  The extra large steamed bun sat in a dumpling basket on top of a cup (to catch the residual soup).  There was a straw that stuck out from the top and there was already crab roe soup gushing out from it — to be honest, I don’t think there should have been that much soup gushing out yet — the customer should have been the one to let that happen.

In any case, the soup was really hot to suck out from the straw so I had to let it cool for a couple of minutes first.  Once it cooled off, I really enjoyed the fresh Nanxiang crab roe soup!  After you suck out all of the soup, only the dumpling skin and its contents are left.  I only found a shrimp and some scraps of meat inside but otherwise I think the main attraction of this steamed bun was just the straw and soup part.  Nevertheless, I still really enjoyed the experience and was glad to experience it for myself! 😀 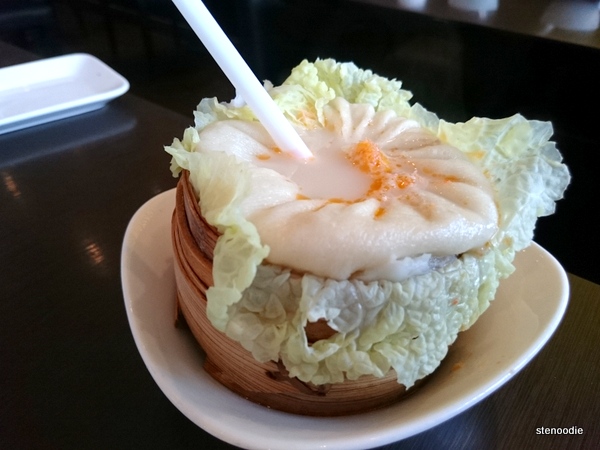 A giant steamed bun with a straw to suck out its soup! 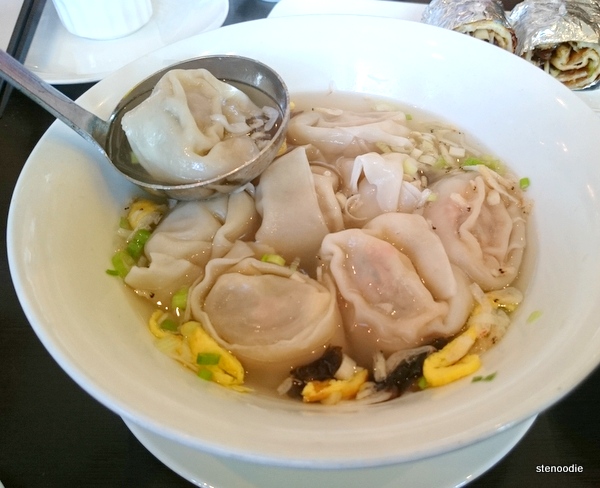 The Pork Wonton in Consommé (consommé is a “type of clear soup made from richly flavored stock or bouillon that has been clarified, a process which uses egg whites to remove fat and sediment” — thanks, Wikipedia) turned out to be very delicious!

The pork wontons were all wrapped in thin wonton skin so it made the wontons even more delicious to eat in the flavourful yet clear soup.  A really well-made bunch of pork wontons! 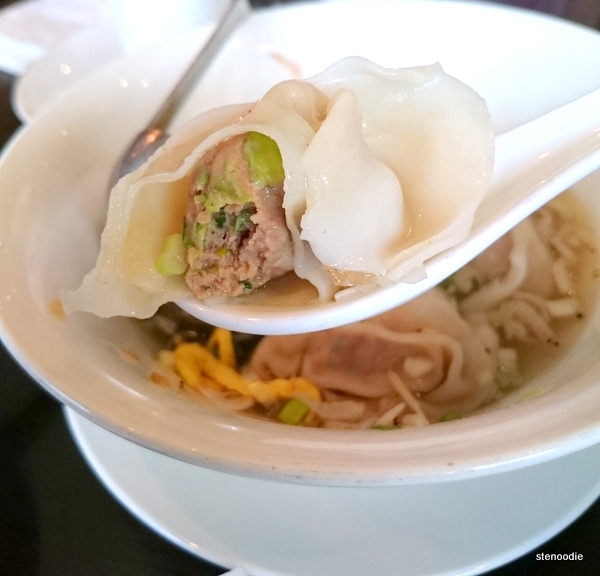 Look at that juicy pork and veggie inside the wonton. So good!

Now that I’ve visited Yu Garden two times, I second my first impression — the restaurant has high quality Shanghainese food that you are paying a higher premium for it as well.  If you were to take a guest out for good Shanghainese food and you have the money to splurge, then Yu Garden would be a good choice!  Make sure you order the steamed bun with the straw too because there were at least two other tables ordering it that day for lunch too (popular menu item and I heard many people asking the server about “the dumpling with a straw”).