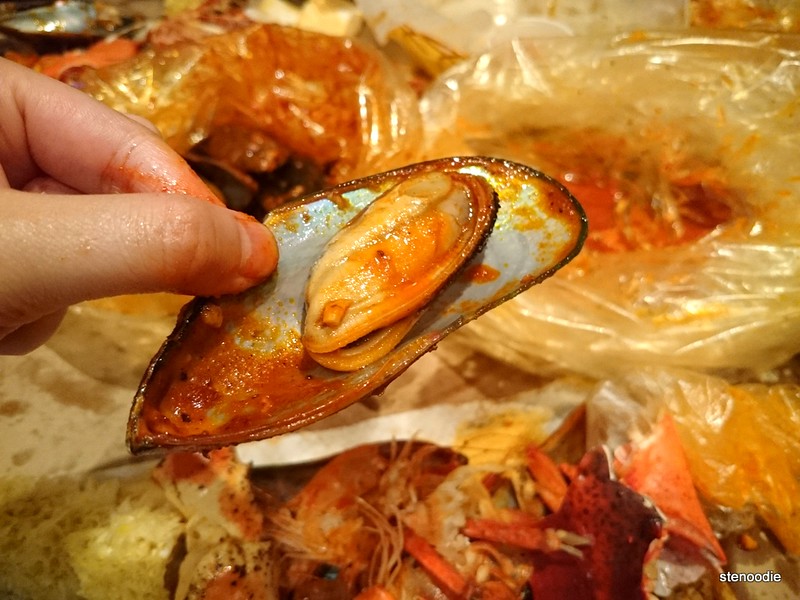 This is apparently the very first seafood boil in Toronto!  It is called The Captain’s Boil and just opened this past Friday on November 6, 2015 in North York, Toronto!  (Usually, I publish posts sequentially, but due to this newest hot spot in Toronto, this blog post is jumping ahead of my back-log!).

Thanks to my friend Patricia who helped us make reservations for this seafood boil restaurant and for Ai for noticing it, we were able to score a 8-person table at Toronto’s newest seafood restaurant.  Boy, was I excited!  This restaurant features seafood that is made a la boil — a typical way of dining on seafood in the states and incorporates a lot of Southern tastes and flavours.  What happens is that the boiled seafood is shelled right at the table by hungry hands and when everyone is done, all you have to do is take the brown paper table covering and wrap everything up to throw away.  Easy, fun, delicious, and amazing!

The Captain’s Boil website is currently still under construction (as seen here) and so unfortunately, you can’t see what their menu is like.  I took pictures for you guys!  Once their website becomes live, what I just wrote will not apply anymore, so just keep that in mind! 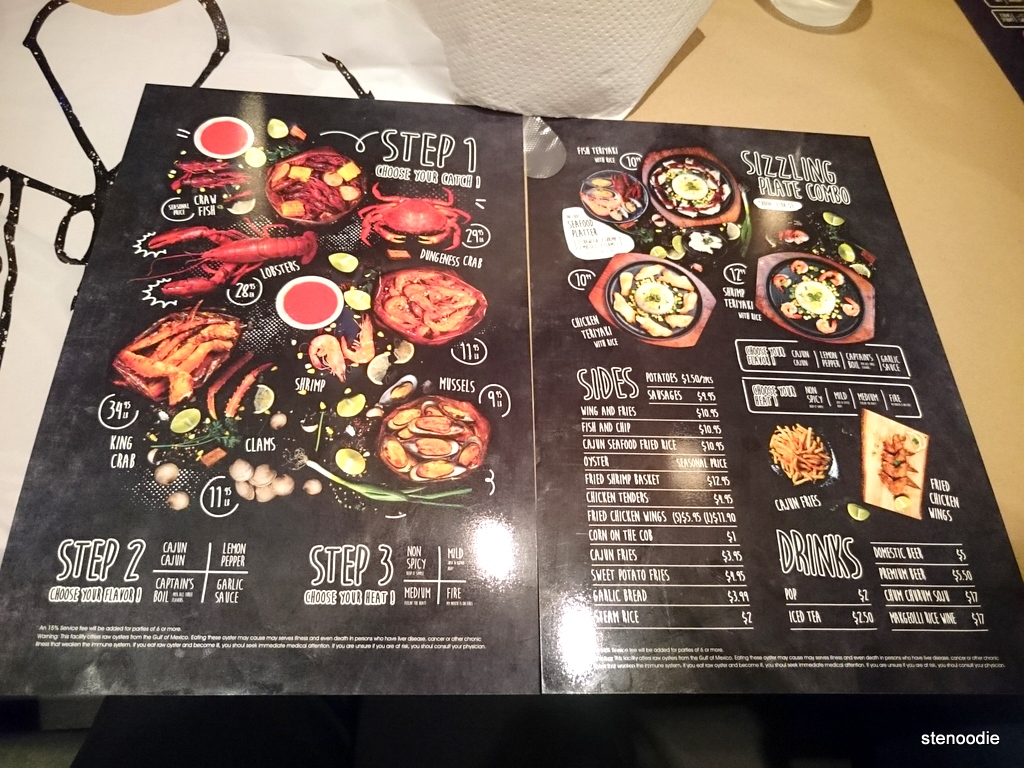 Essentially, you choose the catch (crawfish, lobster, dungeness crab, king crab legs, mussels shrimp, or clams).  Then you choose what kind of flavour you want the seafood in (Cajun Cajun, Lemon Pepper, Garlic Sauce, or Captain’s Boil — mixture of all three flavours), followed by the four level of Heat: Non Spicy, Mild, Medium, or Fire (I heard this one is really, really hot!).  Then the servers will bring out your catch in the desired flavour and heat level in a plastic bag and off to town you go on eating it with your hands.  No utensils or plates are given!  You can wear the disposable plastic gloves that are given if you don’t like to have messy fingers (however, the seafood sometimes punctures through the gloves regardless, so you will still have to wash your hands!). 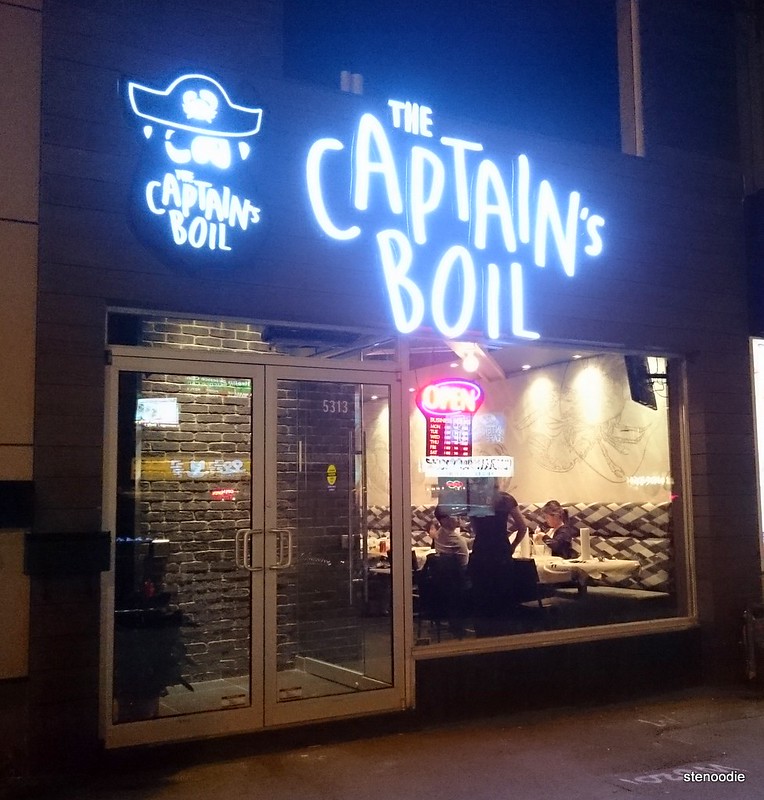 Our reservations were for 6:30 p.m. at this North York location on 5315 Yonge Street on a Sunday night.  I simply parked my car at Finch Subway Station and walked 10 minutes to this restaurant — it was a nice walk on a cool autumn night.  Otherwise, you can park on the street closer to the restaurant as well.  I liked the modern design of the restaurant logo that shone brightly in the autumn night.

There weren’t too many people here yet at 6:30 p.m., but some tables already had empty seafood shells piling high and customers eating happily. 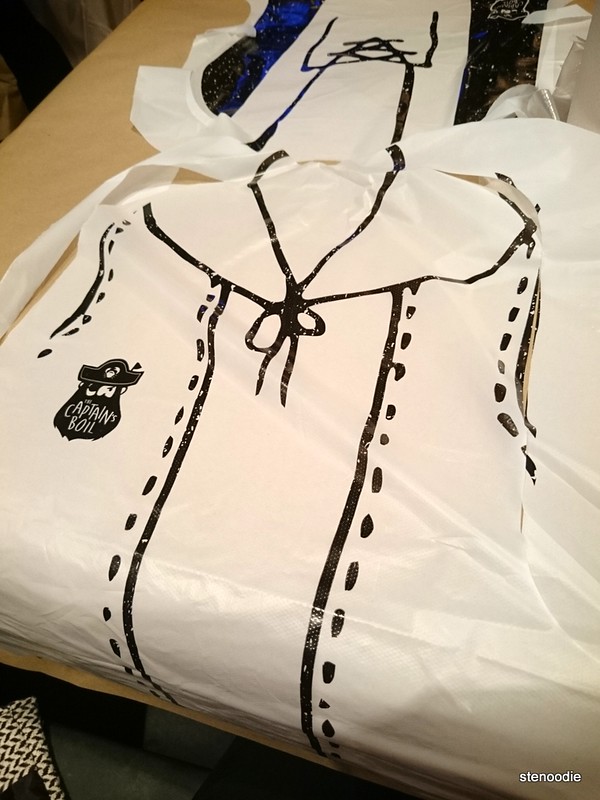 Upon sitting at the table, there were plastic bibs covering the table for each person.  It was really cute because each plastic bib was a different design of a “captain/sailor” theme.  The table was covered with a piece of large brown paper and there were two rolls of paper towels and plastic disposable gloves as well.

Since we were an 8-people party, we decided on ordering per four people so that it would make the sharing a lot easier.  Half of the table ordered their own share and the other half ordered their own share to share.  It was simple that way.  Even our male server serving us that night asked us ahead of time how the bills would be split — separate or as a group — and we told him that we were going to order per four people in the group. 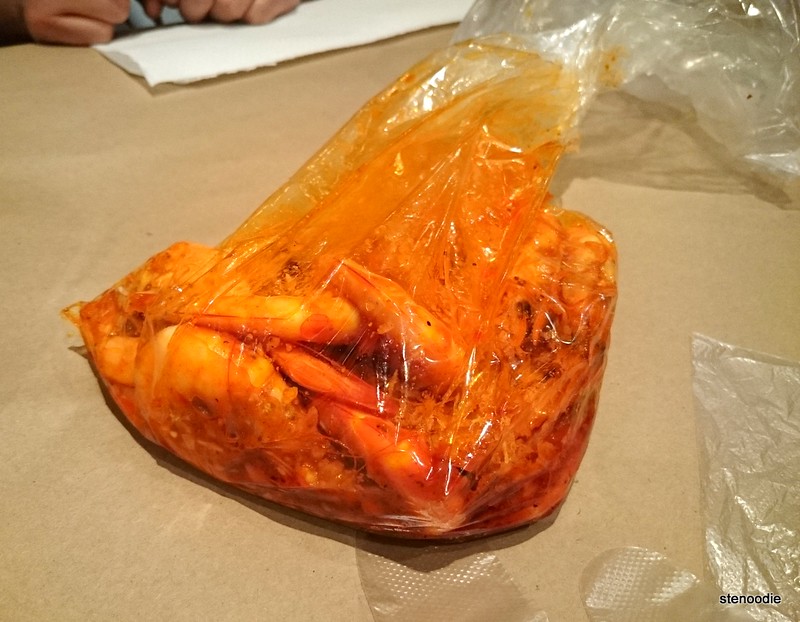 Seafood bag #1 plopped on our table!

Before long, the bags of seafood were dropped on our table.  The first bag was the one pound of shrimp in Captain’s Boil in mild heat.  The bag was really hot and you have to be really careful when you are getting the shrimp out of the bag!  The Captain’s Boil sauce was pretty good and I loved that the shrimp was so fresh and easy to shell.  It was delicious to dip the shrimp into the bag for more flavour. 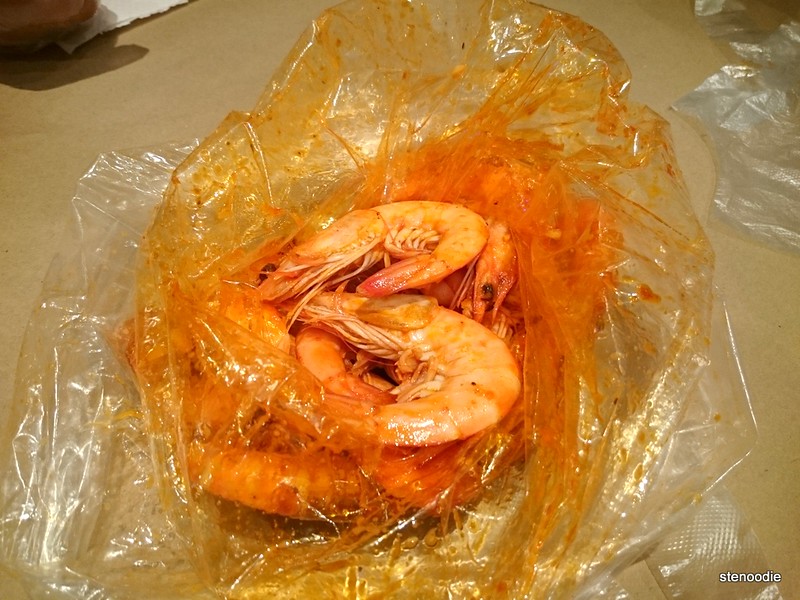 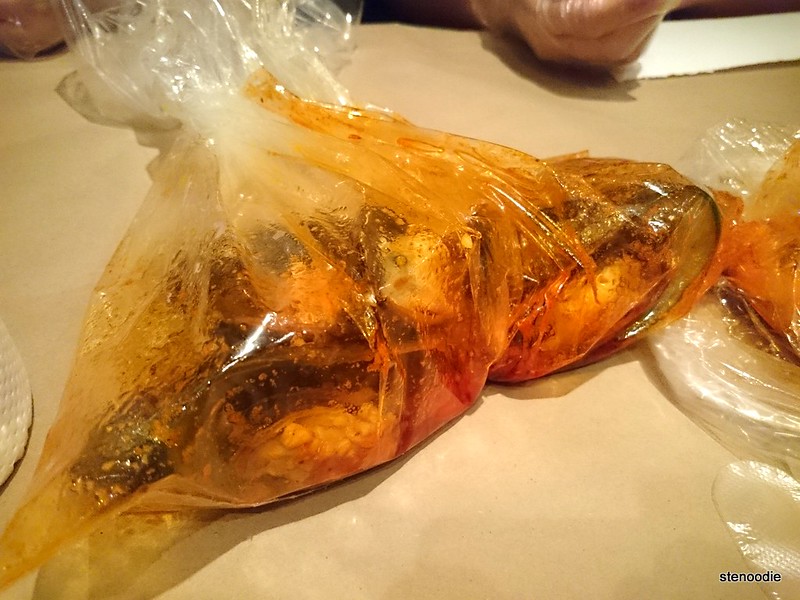 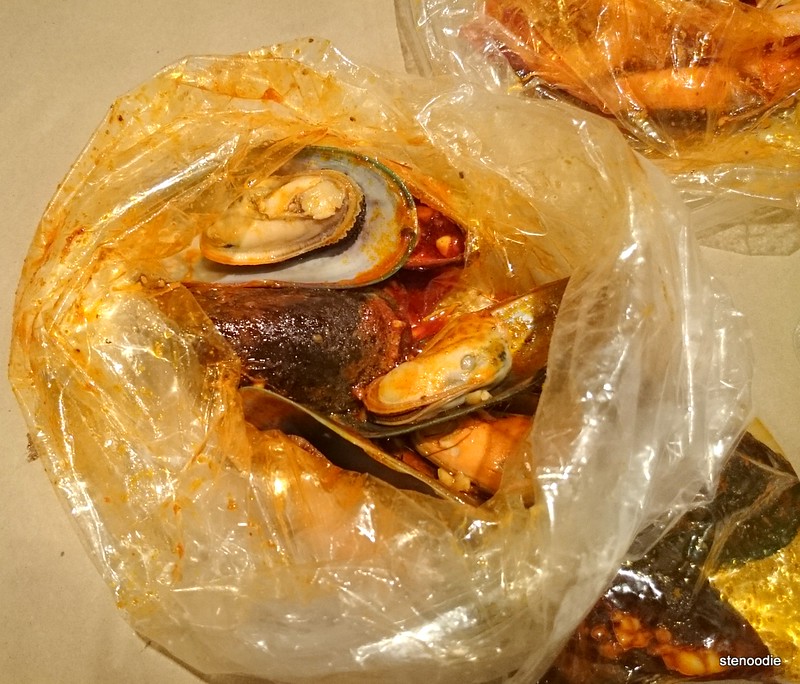 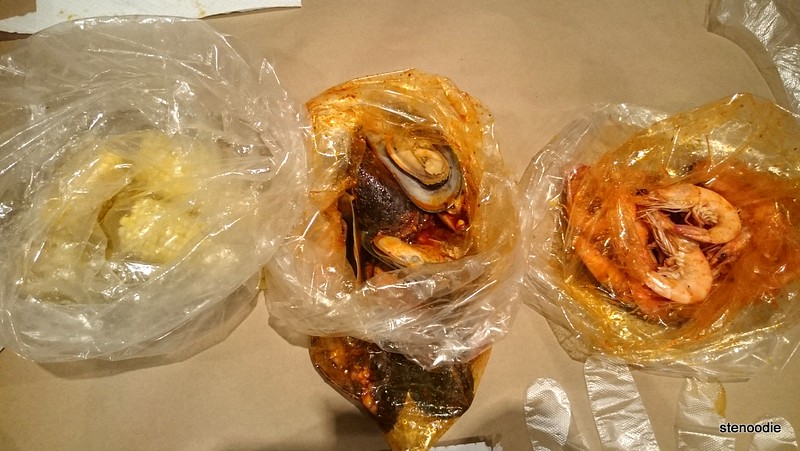 Ready to dig in!

The corn cobs were also perfectly steamed.  They were fresh, sweet, and such a nice balance to the savory seafood.  We had the corn cobs arrive separately in its own bag so they weren’t savory, but I believe you can also request for your corn cobs to be added into the mix of a seafood bag so that it can soak up the sauce if you like. 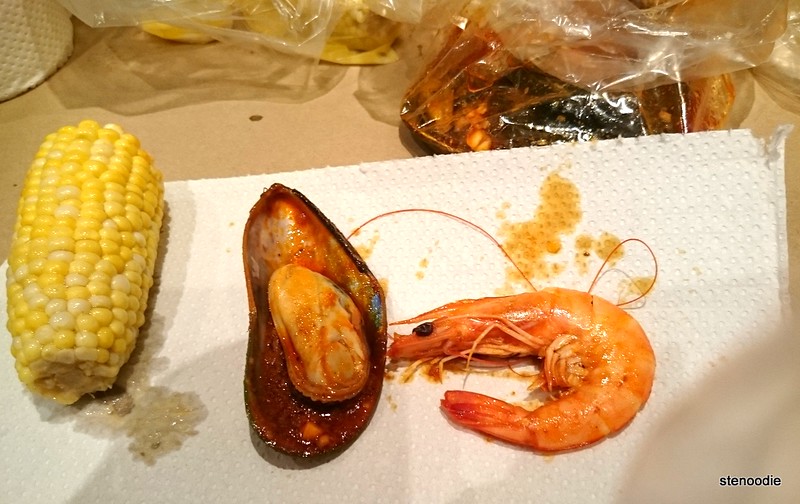 Super hot to the touch! 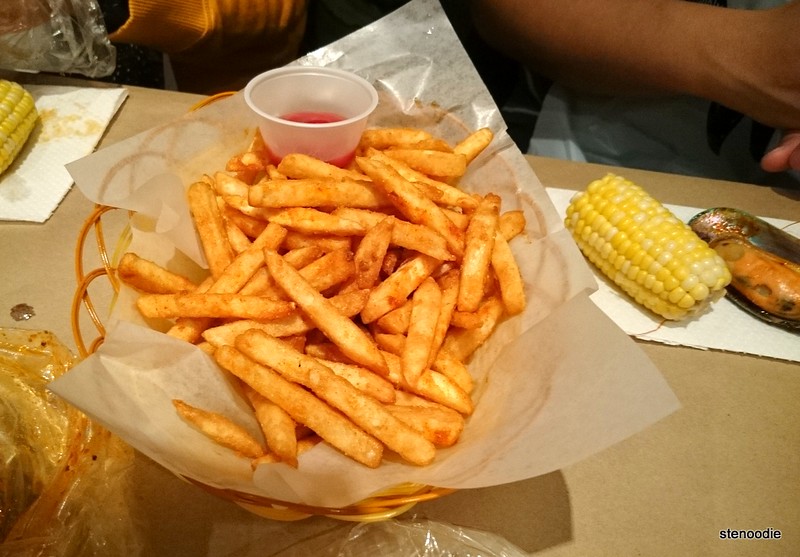 The Cajun fries came in a basket with ketchup.  It was actually very good; very crispy and crunchy while soft in the middle and slightly spicy with a Cajun kick.  Marvin devoured one basket of fries SO quickly. 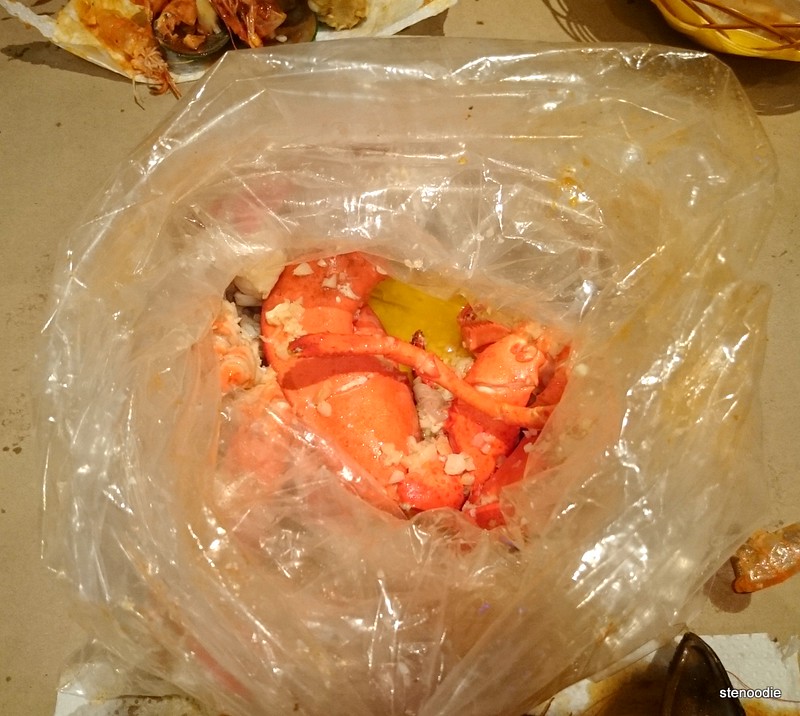 We were all awaiting eagerly for the lobster in Garlic Sauce!  We had ordered one lobster to share among the four of us, so it was actually a little hard to share the lobster equally.  My advice is that if you are ordering the lobster, you share it among two people instead.  It was nice that the lobster was already pre-cracked in some areas so you could tear it apart easily.  The lobster meat was so juicy and fresh!  There were also a lot of garlic in the sauce which made it super delicious.  The garlic was a little spicy too! 😀 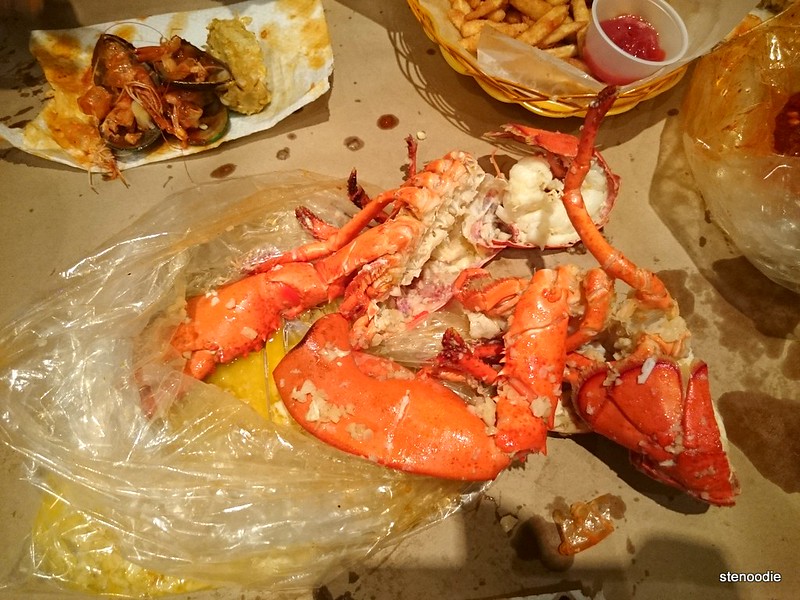 That Garlic Sauce was delicious! The butter too. #nom 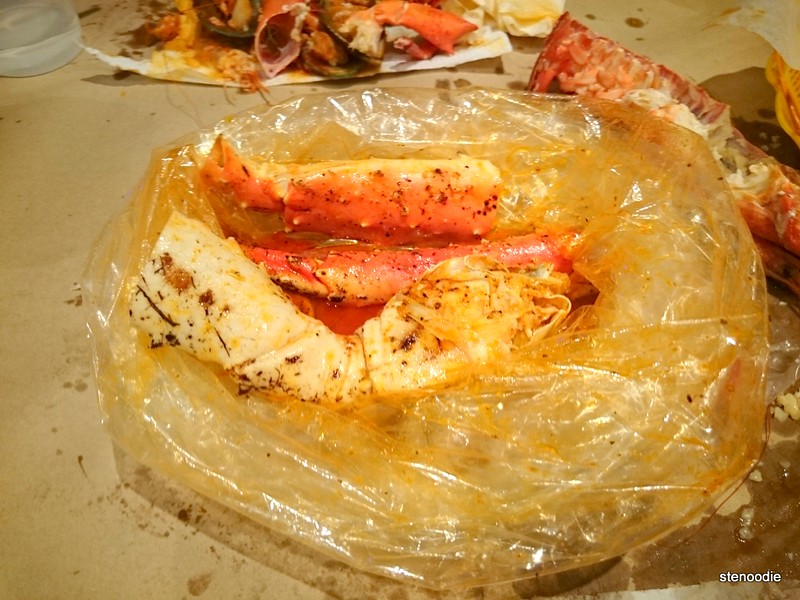 After this, we were not full yet so we ordered another round of mussels done in Cajun Cajun again and also for a pound of King Crab Legs done in Lemon Pepper.  I already really liked the Lemon Pepper sauce instead!  It was delicious and the King Crab Legs were gigantic!  It reminded me of when I had them in Hong Kong.  Each king crab leg was so meaty and thick.  The Lemon Pepper flavour was slightly lemony with a small kick of pepper.  It was so unique and I’ve never had seafood seasoned like this before. 😀 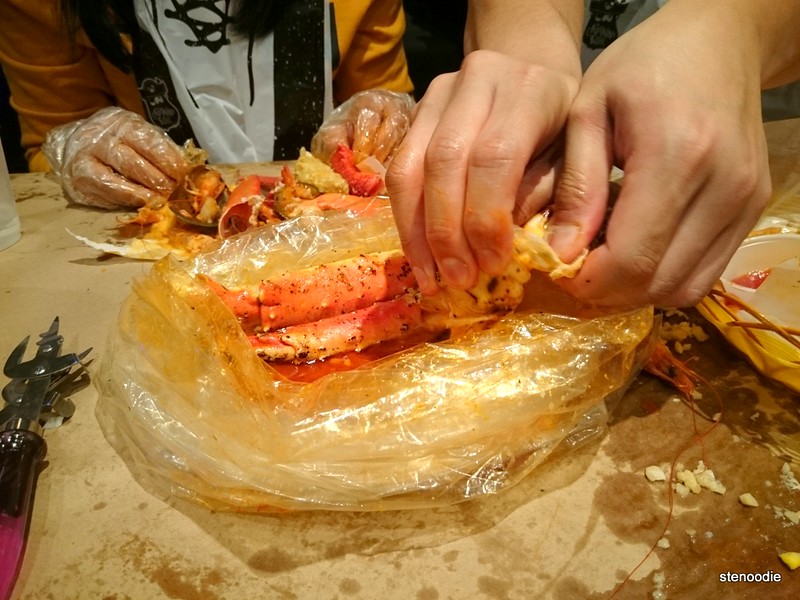 This was a bit difficult to pry apart; you needed the tools to help!

The second round of mussels in Cajun Cajun were interestingly more spicy than the first round even though we also asked them to be done in mild heat.  Nevertheless, it was still just as soft and tender as the first bag; not chewy at all! 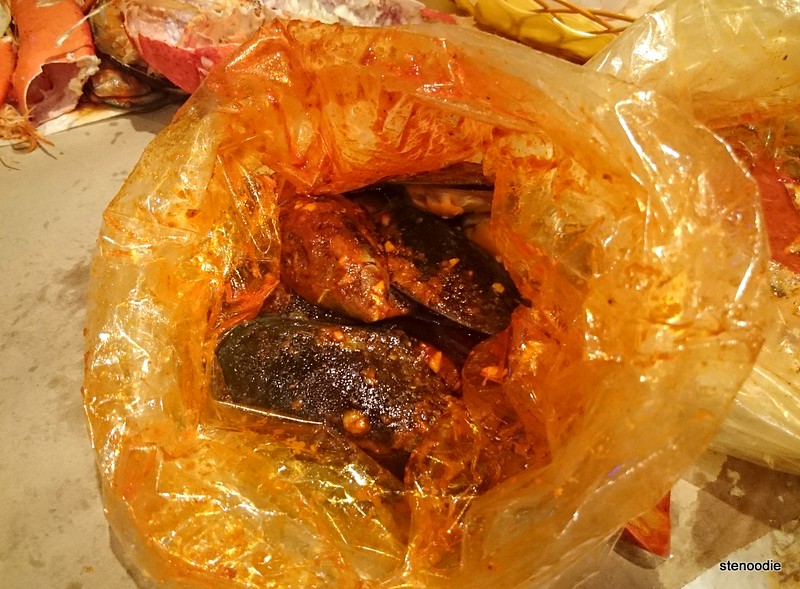 Second round of Cajun Cajun mussels in mild heat 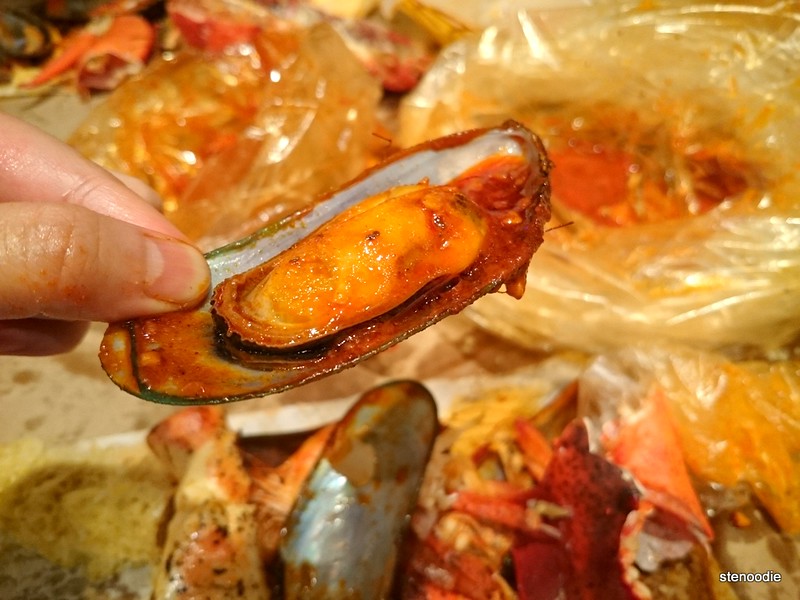 Such a large mussel! 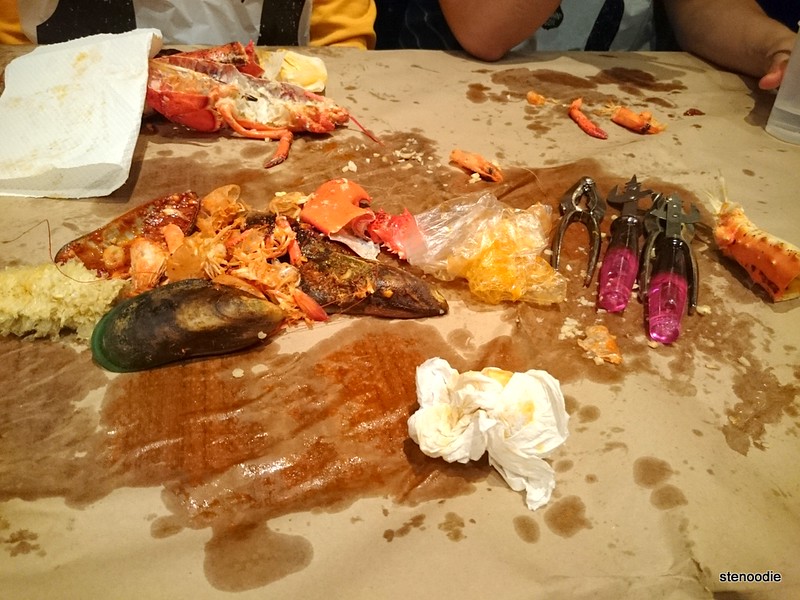 What our table looked like at the end :’D

Overall, I was very impressed with the quality of the seafood here.  They don’t have crawfish yet (they said they will ship into the restaurant later this week), but you can choose from lobster, mussels, clams, (I would love to try that next time), shrimp, dungeness crab, and king crab legs.  It’s a wonderful selection of seafood and it’s so cool to be eating them out of a plastic bag for a boil.  I adored how the seafood was boiled perfectly so that everything tasted so good and fresh.  It reminded me a little bit about how Chinese restaurants cook the seafood so perfectly each time.  Well done! 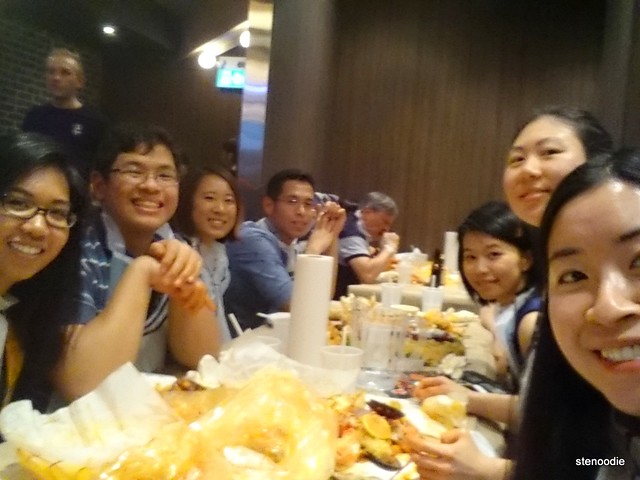 Group selfie to commemorate the night! 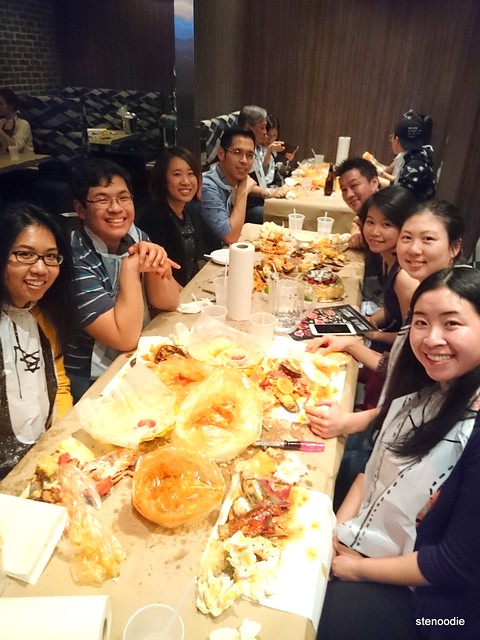 Group shot, aka what our table looked like at the end of the night! 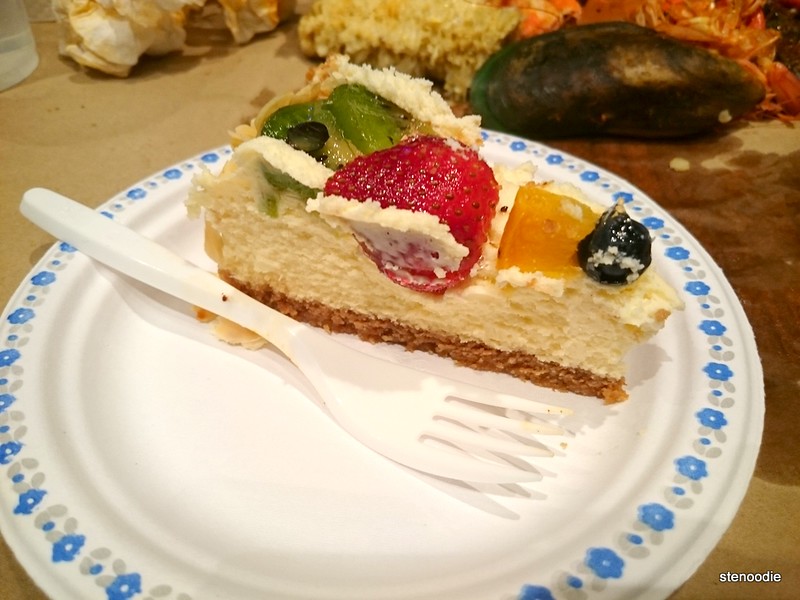 It was Ai’s birthday, so the restaurant was kind enough to help us serve these on paper plates with plastic utensils — the only kind of cutlerly offered to guests of the whole night

My only little problem of the night was with the service/server.  The second round of mussels look a little longer to be served and we had to ask about it; I think they forgot the order.  When we requested for our bills, the server had the audacity to ask us if the bill was going to be split eight ways.  What the heck?  We already informed him at the beginning that we were going to order per four people at the table.  Why the heck would you split the bill in eight ways if the two halves of the table ordered different things?  It didn’t make any sense to me.  I know that the restaurant just opened and that I should give them some slack for the service, but it was a little nonsensical to me that the server didn’t know how to separate the bill for us knowing that both ends of the table didn’t order the same things.  Why would our half of the table want to pay for some things that we didn’t eat and vice versa? :S  (Also, I don’t think our side of the table received the little container with lime that the other side of the table got; what the heck…). 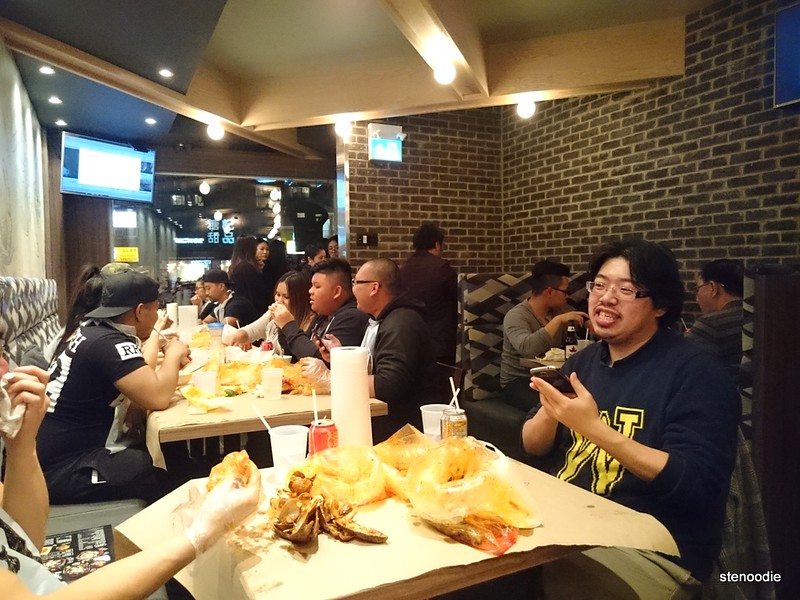 This place was bustling! There was a line-up by the time we left too!

Other than that, I’d love to return again to try the crawfish and clams as well as their other side orders like fried chicken, sausage, and more.  This is truly a very unique seafood joint!

I think The Captain’s Boil is going to be very popular in the upcoming months.  They actually have a second location opening soon (as per their website at least).  Share your thoughts about this restaurant in the comments below if you have visited already! 🙂 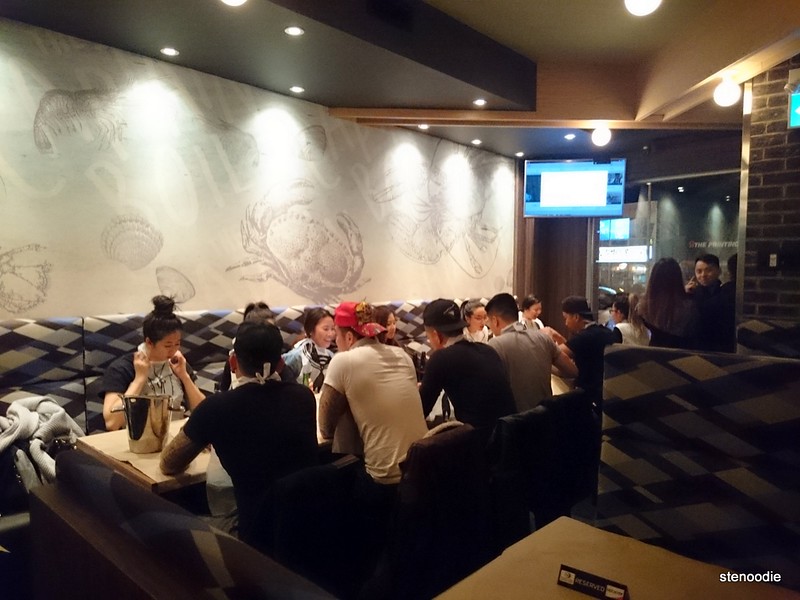 Call early to book a reservation! They have a few tables downstairs too.

Also, if you go now, you can receive a nice 10% discount off all their items as part of their soft opening special; until November 30, 2015 only!  Take advantage! :p

21 Responses to Seafood Boil Dinner at The Captain’s Boil!