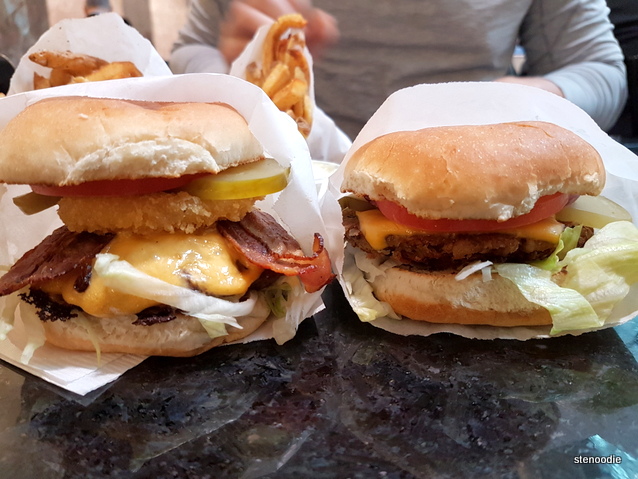 I was invited to try the infamous burgers at Hidden Burger, known as Toronto’s worst kept secret, by the owner Chef Mo.  I had actually heard about Hidden Burger from two other food blogger friends during the summer last year but never had the chance to check it out.  To my surprise and delight, when Chef Mo contacted me about trying his burgers, I was more than happy to oblige!

Ken and I arrived at Hidden Burger a little after noon for lunch on a Monday.  As the name suggests, it’s not a very easy to find restaurant or rather, it’s not a full restaurant at all.  It’s more of a take-out place but there were some bar stools and a counter where you could dine-in if you wanted to (which can be considered a smart casual place too). 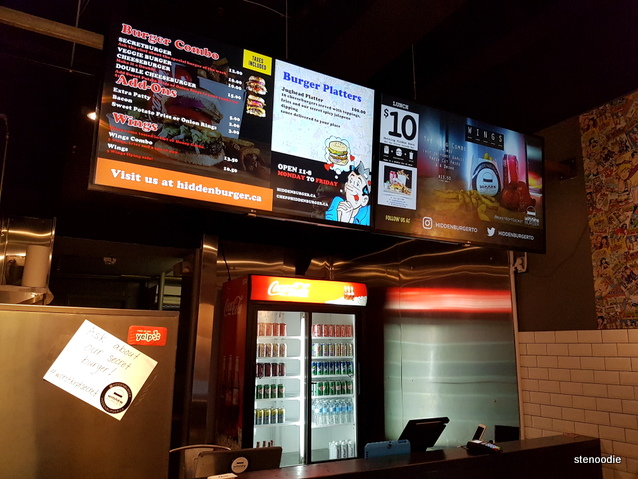 The Hidden Burger is located inside The Bottom Line pub and if you can’t find it, look for the washroom signs once inside the restaurant and once you turn the corner, you will be able to see the kitchen of the Hidden Burger which is where it is located!

Since Ken had been here before (I told him about this back in the autumn time), he showed me where Hidden Burger was.  Chef Mo was the only one in the kitchen and gave me a quick introduction of Hidden Burger before quickly whipping up his burgers for us to try.

We were able to try the Secret Burger and their original recipe Veggie Burger on this visit with their fresh cut French fries. 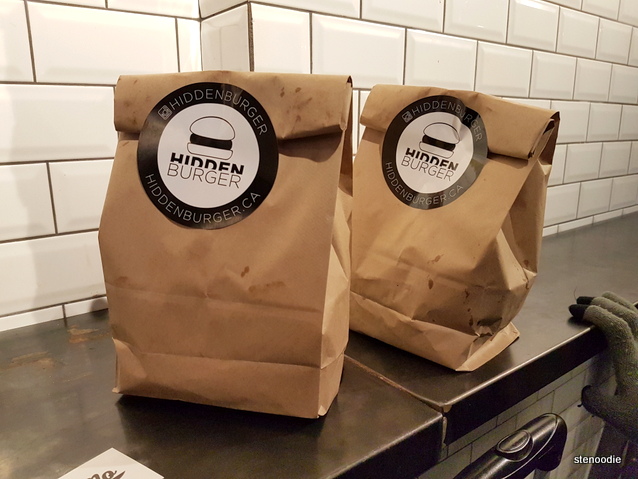 The Secret Burger has a different secret ingredient in its burger each week.  On the week that we tried it, there was a fried onion ring inside the burger!   The Secret Burger also had some crispy bacon in it in addition to the beef patty.  It was really tasty and the bacon just added to the texture and flavour to the burger. 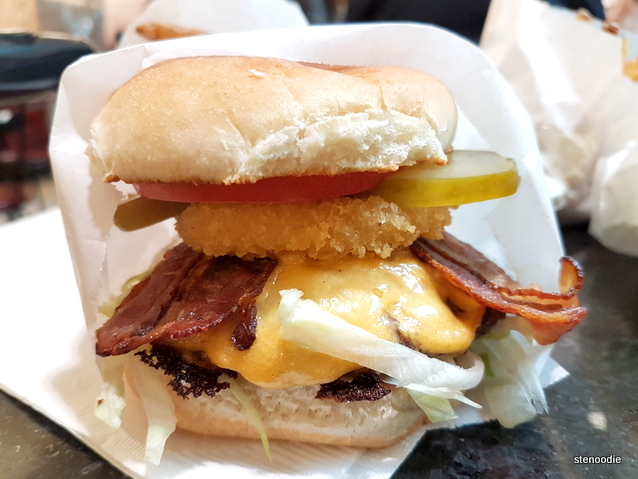 The patty of Veggie Burger was made with black beans, rice, and almonds.  Chef Mo asked me if I wanted cheese on the veggie burger and I accepted.  Both burgers were made fresh to order. 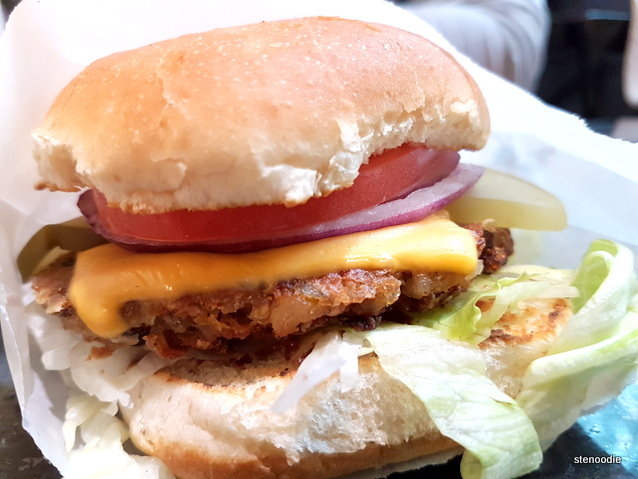 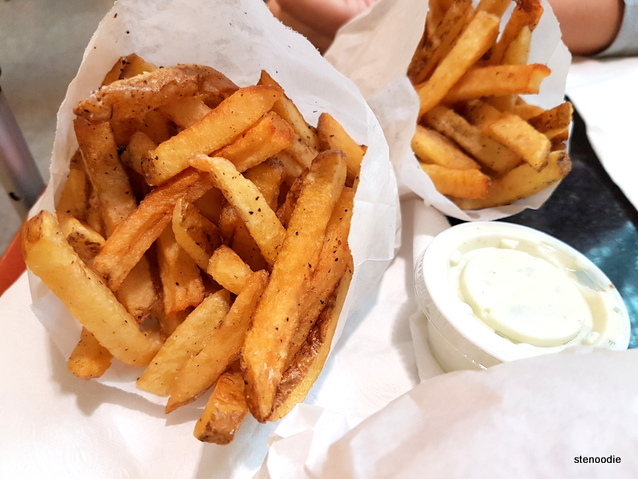 I liked the fresh cut fries with the tartar-like mayonnaise.  The fried were thick cut and already had seasoning on them.

For $10 (already including tax) for the burger, fries, and drink, this was an incredible lunch deal.  To be honest though, the burger itself was a tad on the smaller size (think Shake Shack size) but with fries and a drink, you will be satisfied enough.  For those who want a bigger size, you can always double your order by adding just $5.  I think that is a pretty good deal! 🙂 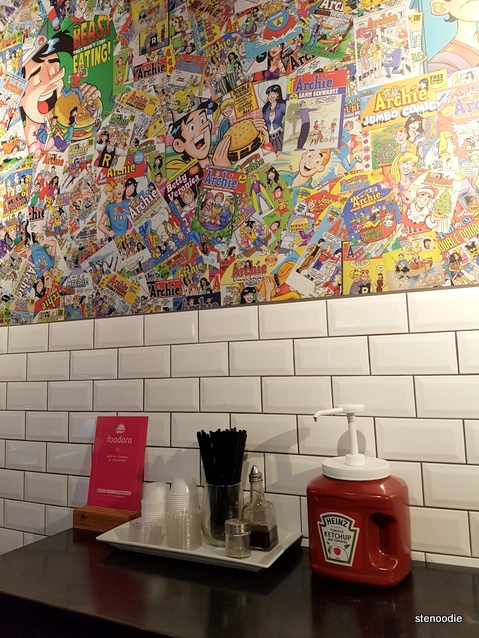 The dine-in counter with a few seats 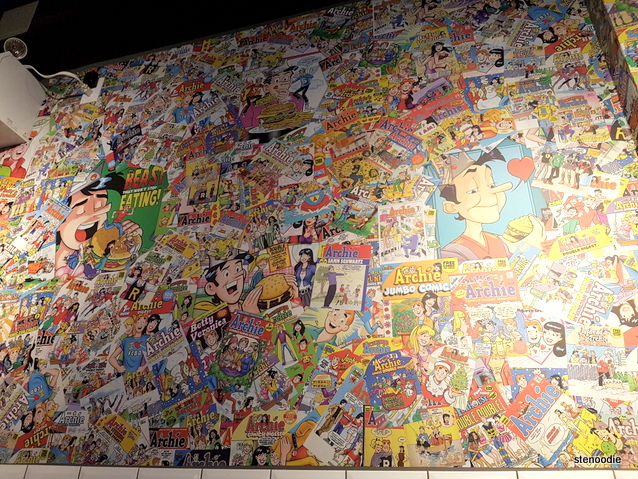 A mural of comic book characters

Hopefully more people will be able to try out Hidden Burger.  It’s a neat concept and really takes going on a food adventure more fun when you have to find the restaurant first! 🙂  The Hidden Burger is open on the weekdays from 11 a.m. to 8 p.m. (closed on weekends).

Chef Mo also informed me that they will be getting a new ice cream machine in the coming weeks.  You will be able to enjoy dessert from them too! 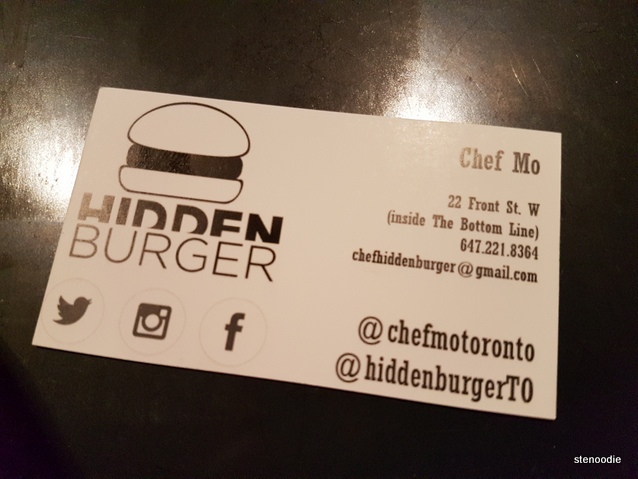 Thank you again Chef Mo for inviting me to try your burgers! 🙂

FTC Disclaimer:  Although The Hidden Burger invited me to a complimentary tasting to showcase their burgers, the opinions expressed here represent my own and not those of the company.