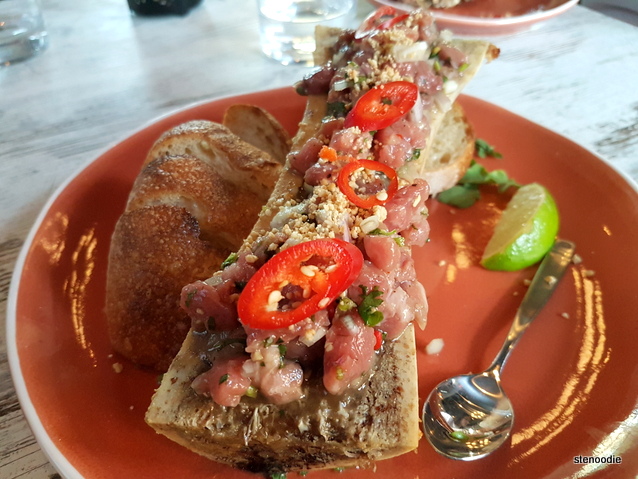 From the chef of Smash Kitchen & Bar comes a new restaurant, NextDoor Restaurant, that features Canadian fusion dishes in tapas style in the heart of Main Street Unionville (this sounds like an advertisement, eh? XD).  My friends and I decided to check this new place out after hearing about it on Instagram.

I had booked dinner for the four of us on a Wednesday at 7:15 p.m.  When I arrived at the restaurant (that features an old mill and a huge wraparound deck with its neighbouring stores and restaurants), the restaurant was already in full swing with lots of customers ordering and dining.  Good thing I had called ahead of time to make reservations!  (There was also a private party that night which meant fewer tables than usual.) 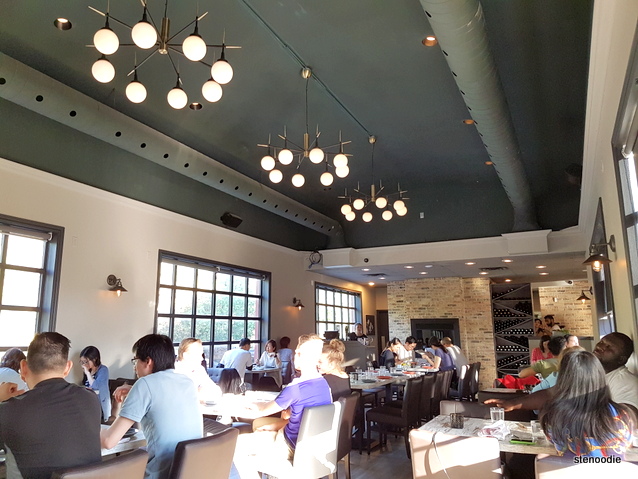 Sleek, modern interior with the trendy lights that many restaurants have nowadays

We sat at a table in the corner of the open dining room and I had to wait a while before the server remembered to bring me some water for my water glass.

As it was a tapas restaurant, we decided to order a few things to share. 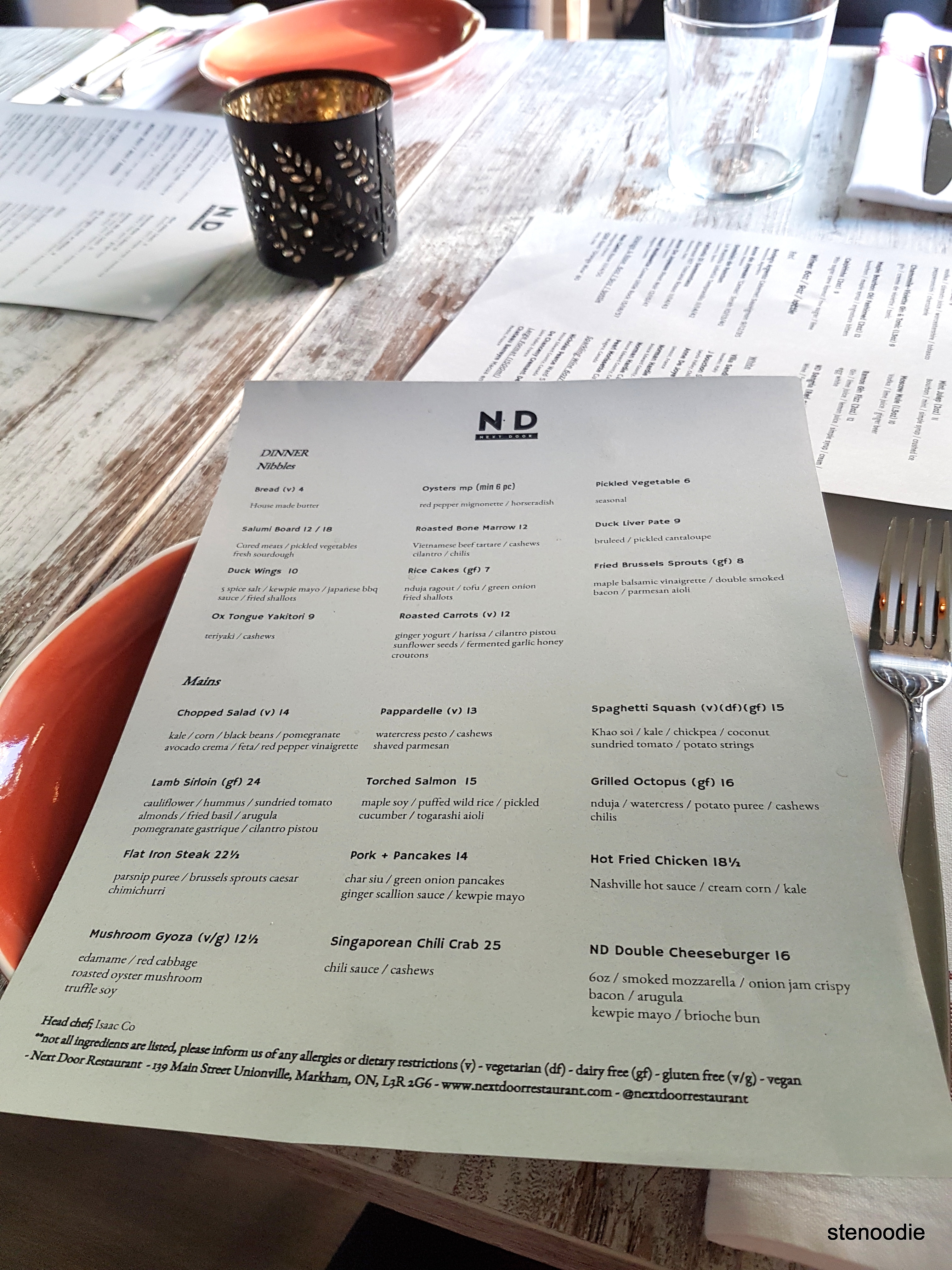 The service was friendly and professional but felt a little stand-offish.  Our water glasses were refilled on a frequent basis after our dishes were served.  Unfortunately though, between placing the order for our food and waiting for our food to arrive, it was more than a 30-minute wait.  I was starving and didn’t really appreciate the half hour wait for the dinner to arrive. 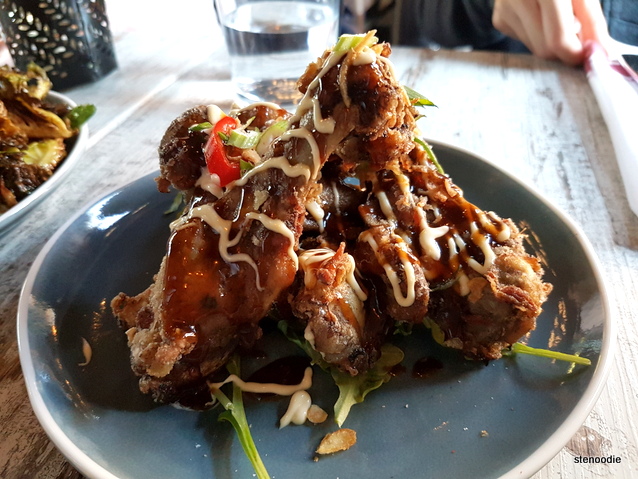 Our first dish from the ‘Nibbles’ selection of the menu was the Duck Wings covered with 5 spice salt, kewpie mayo, Japanese bbq sauce, and fried shallots.  This was a highly raved-about dish on Instagram and I had to see what the hype was all about.

The duck wings were indeed very good.  The meat on the bones was tender although a bit chewy in some areas of the bone but the flavours and seasoning were done very well.

The second ‘Nibbles’ were the Fried Brussels Sprouts with maple balsamic vinaigrette, double smoked bacon (I couldn’t taste these though), and served with a side of parmesan aioli (dairy free) for dipping.  Fried brussel sprouts are such a popular item in restaurants these days.  This one was done nicely.  I especially liked the parmesan aioli because it was so cheesy and smooth!  I could have licked up the rest of it. 😀  My friends really favourited this appetizer. 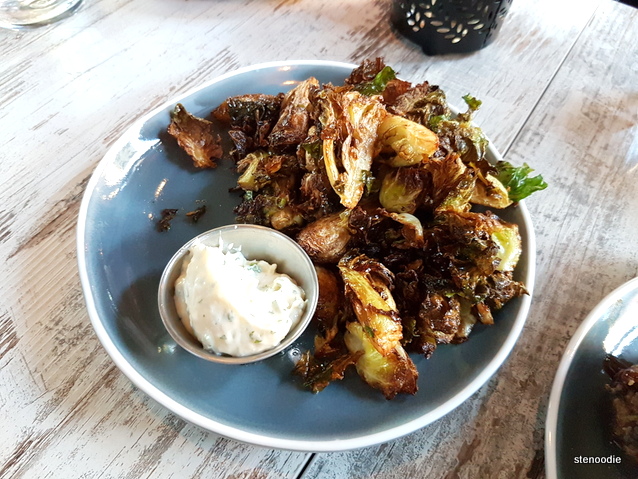 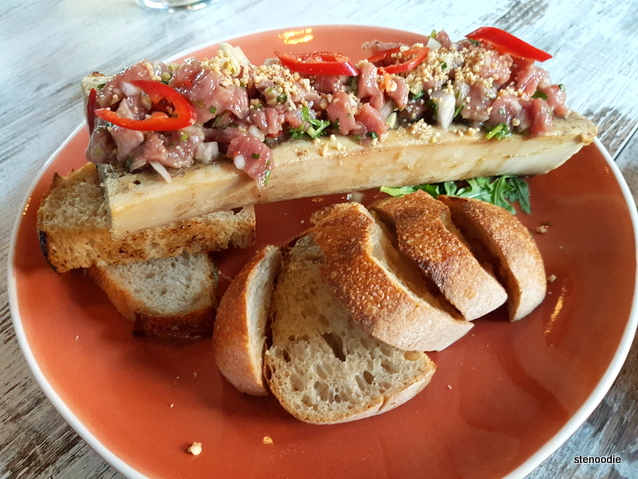 I would say that the Roasted Bone Marrow, another ‘Nibbles’, was the best and highlight dish for me that night.  It’s hard to find good bone marrow and the fact that this was only $12 made it an entire steal!  The roasted bone marrow was so large (with so much marrow inside to scrape out) and in addition to eating coveted bone marrow, there was also Vietnamese beef tartare on top of the marrow itself!  There were also cashews, cilantro, and chilis on top of it.

There were a couple pieces of toasted bread where you could put the tartare and bone marrow to eat altogether.  This was seriously so, so good!  The bone marrow was perfectly warm and gooey and oily; just the way that bone marrow should taste.  I could have shared this with one person only; enjoying half of this would have been amazing yet to finish it all would have been too much.  If you enjoy bone marrow, you might find yourself in the same position! 😛  The Vietnamese beef tartare was a little chewy in some parts but the delicious bone marrow overshadowed it entirely. 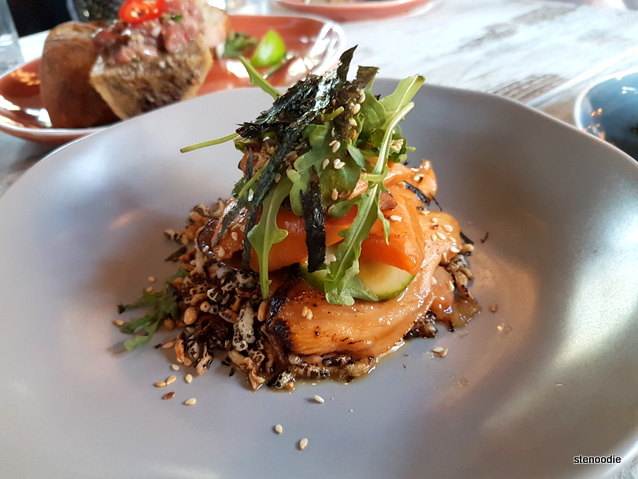 We ordered two items from the ‘Large Plates’ menu to share.  The Torched Salmon was prepared and presented so nicely.  The salmon was actually torched in several gradients so that some parts of the flesh were more cooked than others and thus some parts were kept more raw.  This made for such a wonderful texture of the salmon and even reminded me of smooth and soft smoked salmon flesh.  It was served also with some maple soy, puffed wild rice, pickled cucumber, and togarashi aioli.

This was definitely a delicate dish to share and seemed almost like a fine dining dish.  For $15 though, it was worth trying and I loved the taste and texture of the salmon. 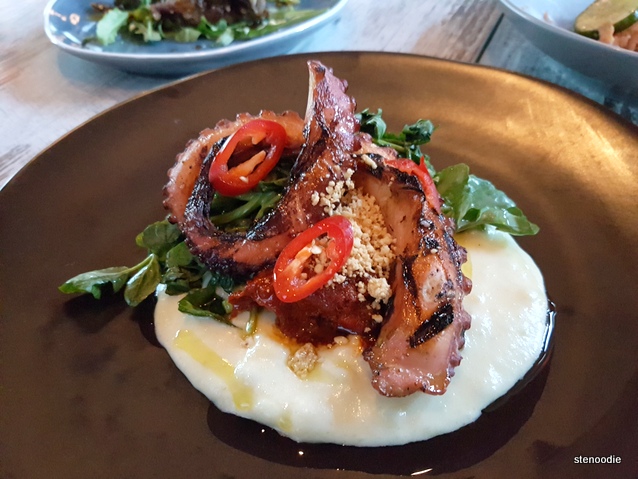 Our second ‘Large Plates’ dish was the Grilled Octopus which included nduja, watercress, potato puree, cashews, and chilis.  Again, this was presented artfully with the potato puree underneath the single tentacle of the octopus.

I was really, really pleasantly surprised with how tender and beautifully and perfectly grilled the octopus was.  Octopus can very easily be over grilled to become a chewy mess, but this one was just perfect.  I’m not even a huge octopus fan but this one was so delicious!  The potato puree was really good too.

All in all, we spent less than $20 each to try a lot of dishes that night although I do have to say that we probably could have split one more dish to really fill our stomachs.  Alas, it was a really good meal and I know why there’s a lot of (well deserved) hype about NextDoor Restaurant now! 🙂

December 18, 2017:  I came back to NextDoor!  Marilyn wanted to try this restaurant out for dinner as she had only been here for brunch.  We made a reservation and when we arrived at 6:30 p.m. on a Monday evening, the restaurant was still scarce with customers.  By the mid-point of our meal though, that’s when more customers started arriving.

The server was very good with refilling our waters during the first half of our visit.  Then, as more customers arrived, his attention was split to the other tables.

On this visit, we ordered a few of the same items as my first visit which was fine because these were stand-out dishes.  (This time, the “Large Plates” had been updated to say “Mains”.) 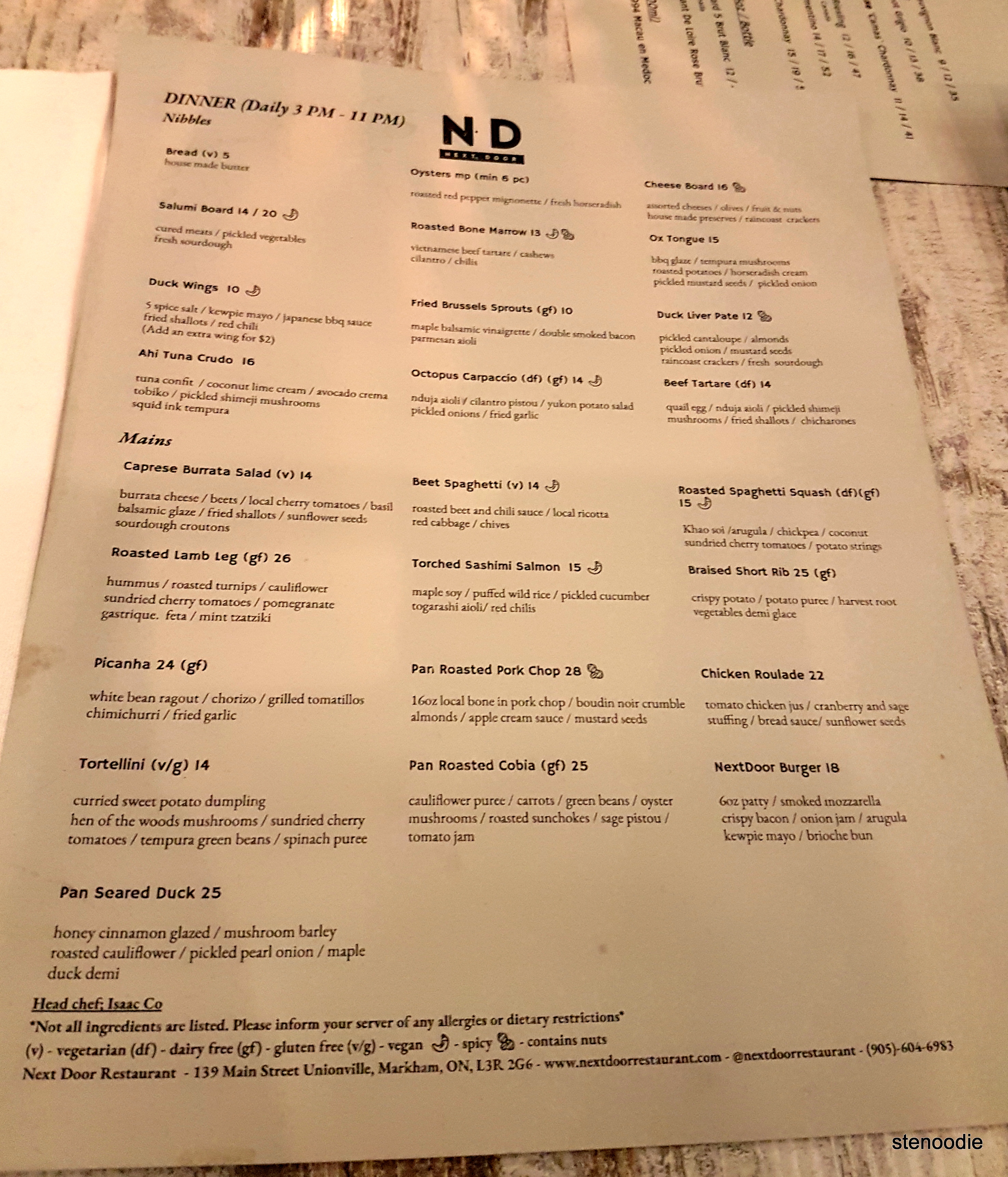 Dinner menu as of December 2017

The Fried Brussels Sprouts were just as good as last time.  I especially liked the parmesan aioli. 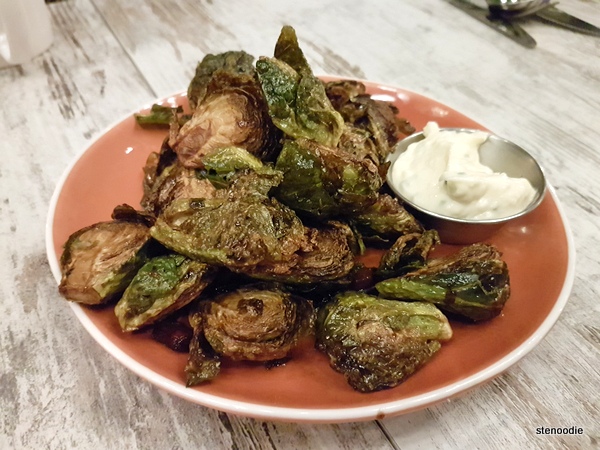 I raved about the Roasted Bone Marrow from last time.  This time though, I found that the marrow portion was a little insufficient and there were fewer pieces of bread on the table than last time’s dish.  Also, the bread seemed a tiny bit stale..  Also, the price has gone up one dollar. 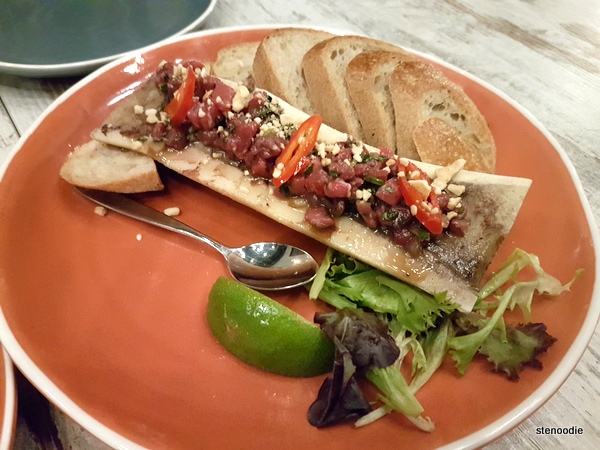 The Duck Wings were tender and good like last time. 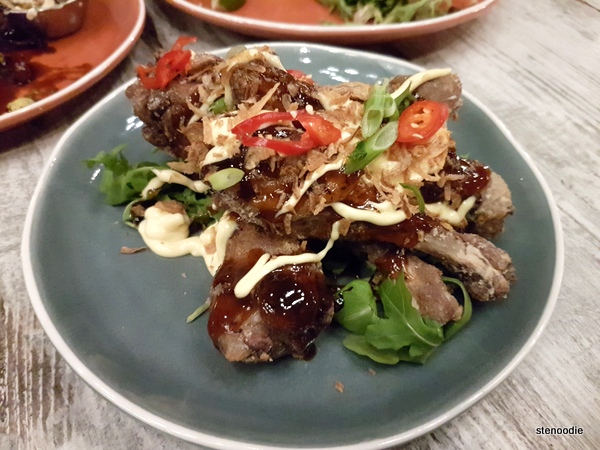 The Chicken Roulade had tomato chicken jus, cranberry and sage stuffing, bread sauce, and sunflower seeds.  The chicken was quite good and the stuffing did remind us of a holiday turkey dinner.  Since we were sharing it though, I couldn’t taste any of the sunflower seeds. 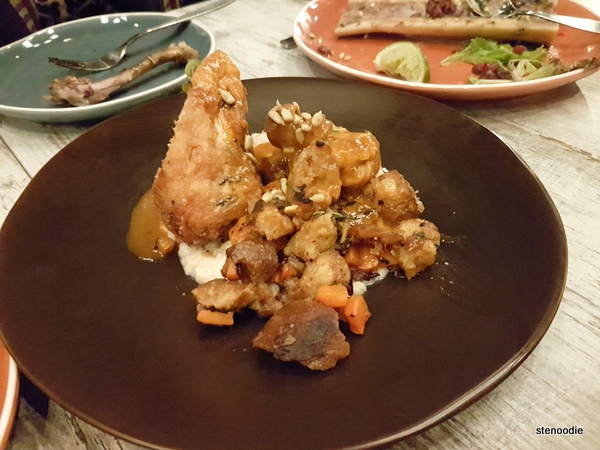 The Roasted Spaghetti Squash was an interesting dish.  It had potato strings on top of it, khao soi, arugula, chickpea, coconut, and sundried cherry tomatoes.  Again, I found that because we were sharing this dish, it was a little difficult to try to taste every single ingredient.  It was still good though. 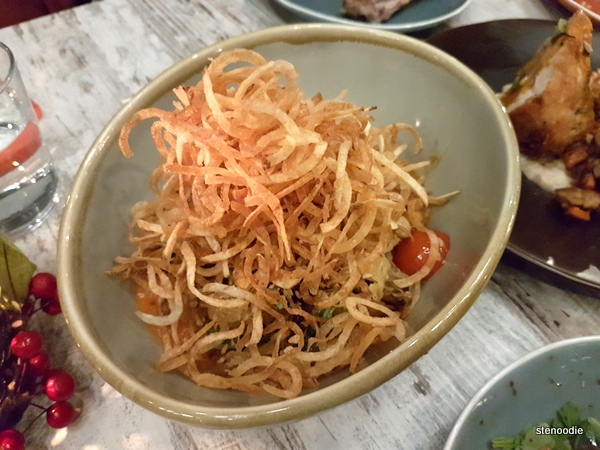 2 Responses to Dinner at NextDoor Restaurant