A Late Lunch at Kettle Drums in Peterborough 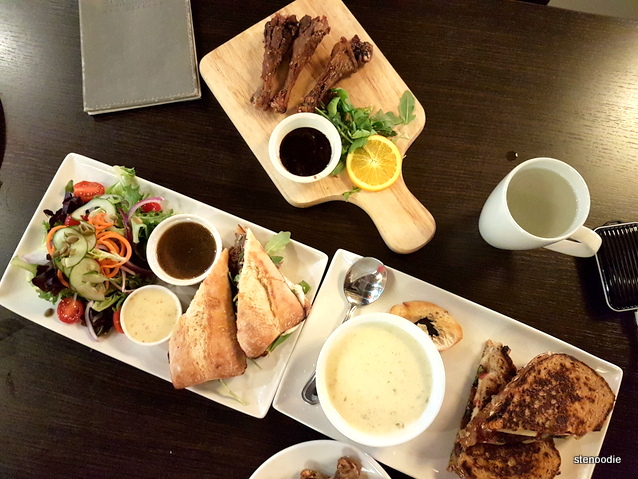 Soon after arriving in the small city of Peterborough, we set out for a late lunch.  We surveyed Google Maps for a reputable and popular restaurant and Kettle Drums was on the top of the list.  The photos of the food looked good too so we went for it.

Unlike many of the restaurants in downtown Peterborough that only have street parking, this Kettle Drums actually (and luckily for us) featured a substantial parking lot.  We parked and entered the restaurant just as it was starting to rain outside.

(Fun fact:  The restaurant was built out of an old automotive repair shop.)

The interior of Kettle Drums had low lighting and was a very modern and upscale casual styled restaurant with a fireplace near the entrance, a bar, and some nice Canadian-style artwork on the wall.  Our server, Tim (I believe that was his name), helped us to the menus and our drinks as we got settled in.  He was very friendly and accommodating throughout our entire stay there (which further made it such a positive experience).

There were a lot of selections on the menu.  As we were here during a late lunch, there weren’t many customers dining in — it was past two o’clock in the afternoon.  The Duck Wings appealed to us and we each ordered a sandwich. 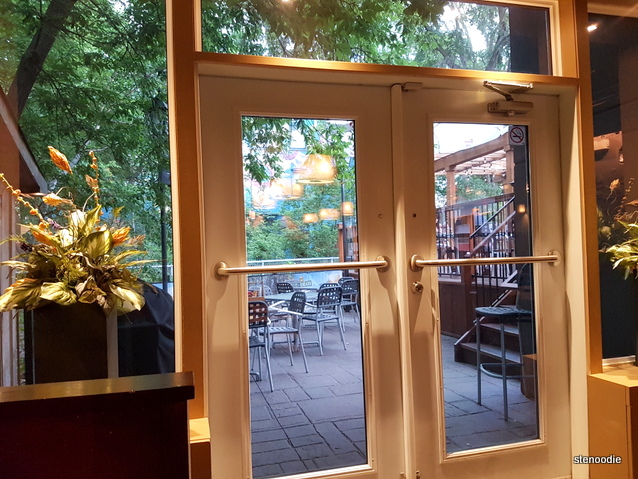 They had two large patios too

The food arrived in a reasonable time.  The Crispy Duck Wings were presented on a wooden board with a slice of orange and a cup of rootbeer sesame dip (that very adorably fit right into the hole of the wooden platter).  The rootbeer sesame dip actually tasted like hoisin sauce to me. XD  There were eight duck wings in total on the platter and I was impressed with this portion.  We could have shared this with two or three more people and still thoroughly had enough. 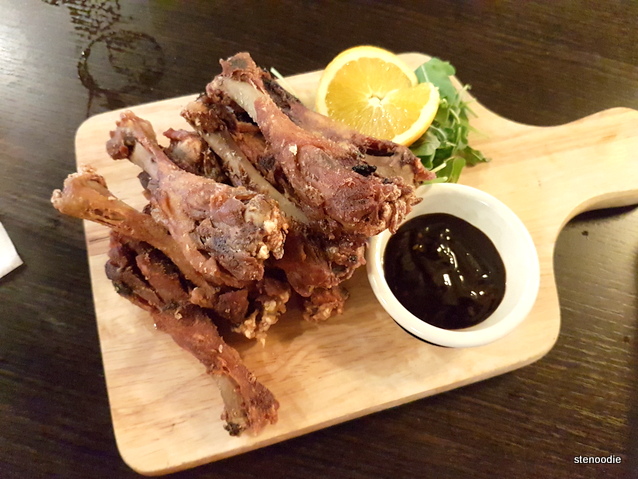 The Crispy Duck Wings were indeed very crispy!  I most recently had duck wings at NextDoor in Markham but hadn’t ever seen these on any menu prior to that.  This was Ken’s first time having them too.  The meat on the duck wings were as tender as they could be and quite tasty.  They weren’t over-salted or too heavily seasoned either.  Yum. 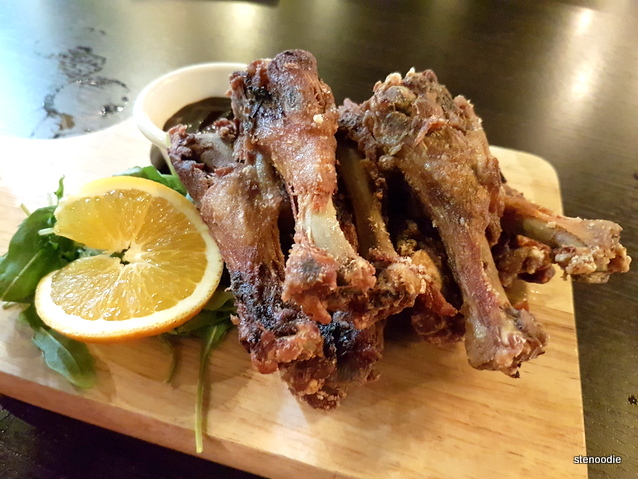 The Lunch Sandwiches were only served until 5 p.m. so I’m glad that we did make it here for lunch.  Each sandwich was served with a choice of soup, hand cut fries, sweet potato kettle chips, or the house salad.  Upon hearing from Tim that their soup of the day was a jalapeno and cheese one, I was very curious and interested to try it. 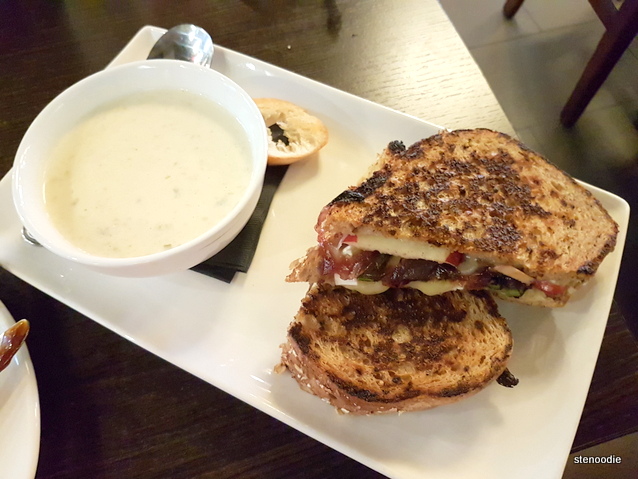 My Asparagus Panini had five year aged cheddar, double creme brie, shaved apple, grilled asparagus, and red onion jam on panini bread.  This was actually really good!  At first look, I didn’t expect the panini to be served on whole grain bread and it appeared like it would be overtoasted and dry.  However, I was proved wrong and the entire sandwich was very well grilled.  The ingredients all combined together into a sweet yet savory and very juicy sandwich.  I was thoroughly impressed and enjoyed it. 🙂 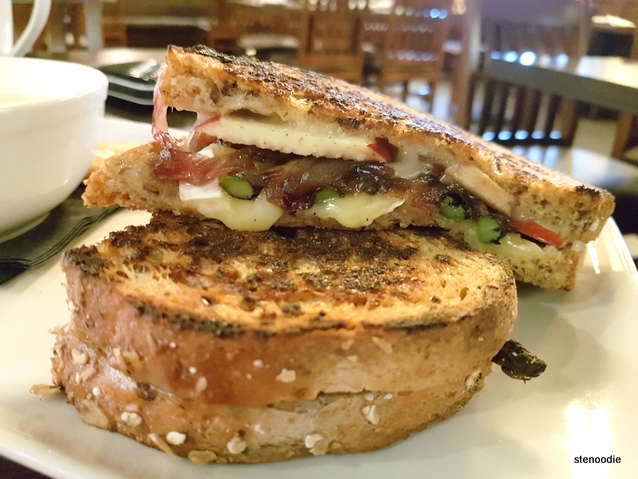 You can see the slices shaved apple, brie, red onion jam, and stalks of asparagus

The jalapeno and cheese soup was a first for me.  It was very well done too.  It was very creamy and the jalapeno were finely chopped into little bits into the soup.  At first, one sip might not bring the spiciness to attention but after swallowing the soup, you will feel the heat creep up in the back of your throat.  It was a great soup! 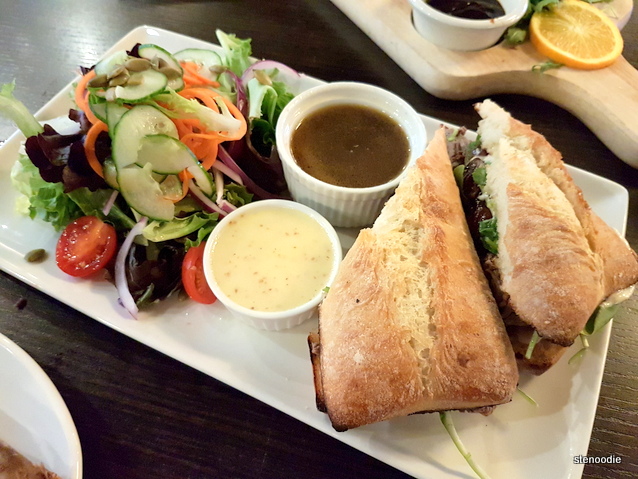 The Prime Rib Au Jus Sandwich that Ken ordered had shaved Prime Rib, red onion jam, arugula, and horseradish aioli on ciabatta bread.  Ken chose the house salad which came with really fresh greens and a light dressing that was very yummy.  The Prime Rib Au Jus Sandwich came with a dipping sauce on the side for the sandwich.  The prime rib meat in this sandwich was really substantial and tasted great.  It was a little sweet from the red onion jam too and overall was another a great tasting sandwich. 🙂

I was so satisfied and happy with the food at Kettle Drums.  No wonder they garnered such high reviews online! 🙂  I love discovering new delicious restaurants. 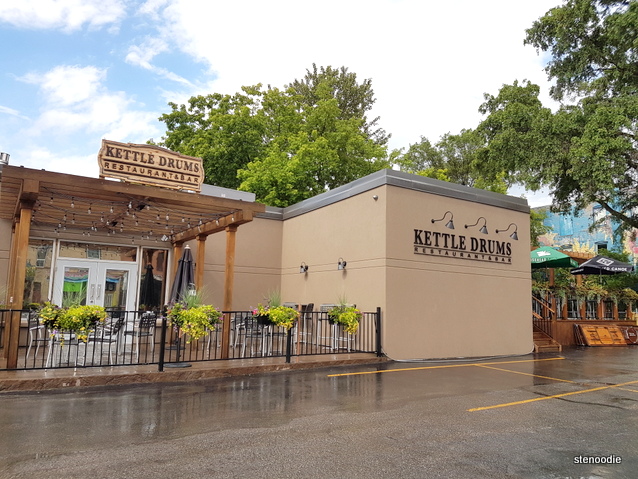 Once we finished our late and walked outside, the rain had stopped. Yay! 😀

1 Response to A Late Lunch at Kettle Drums in Peterborough